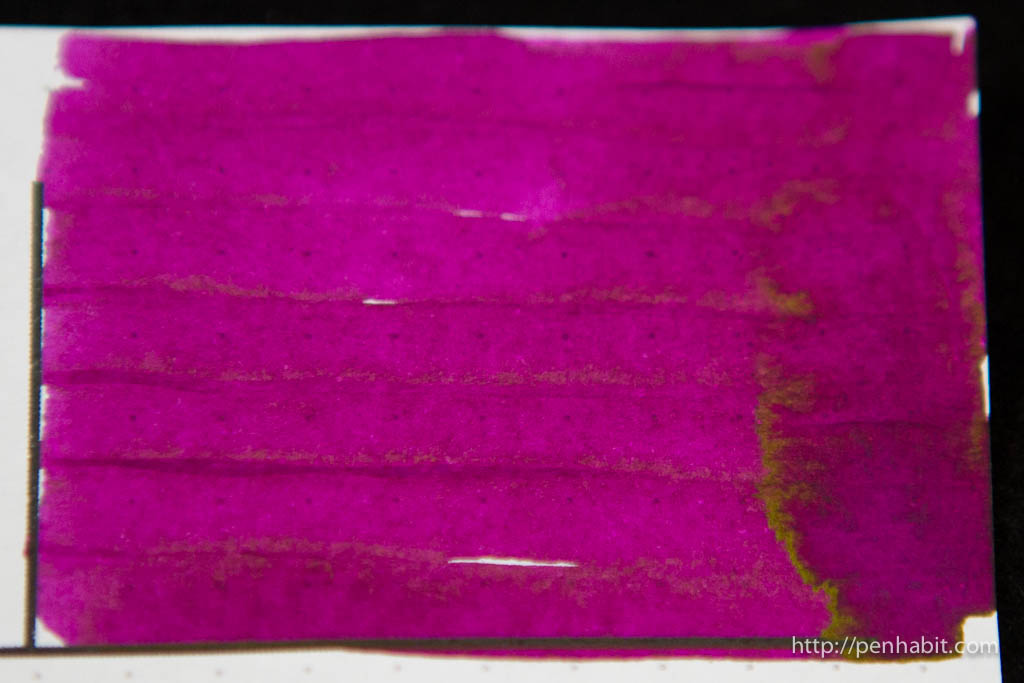 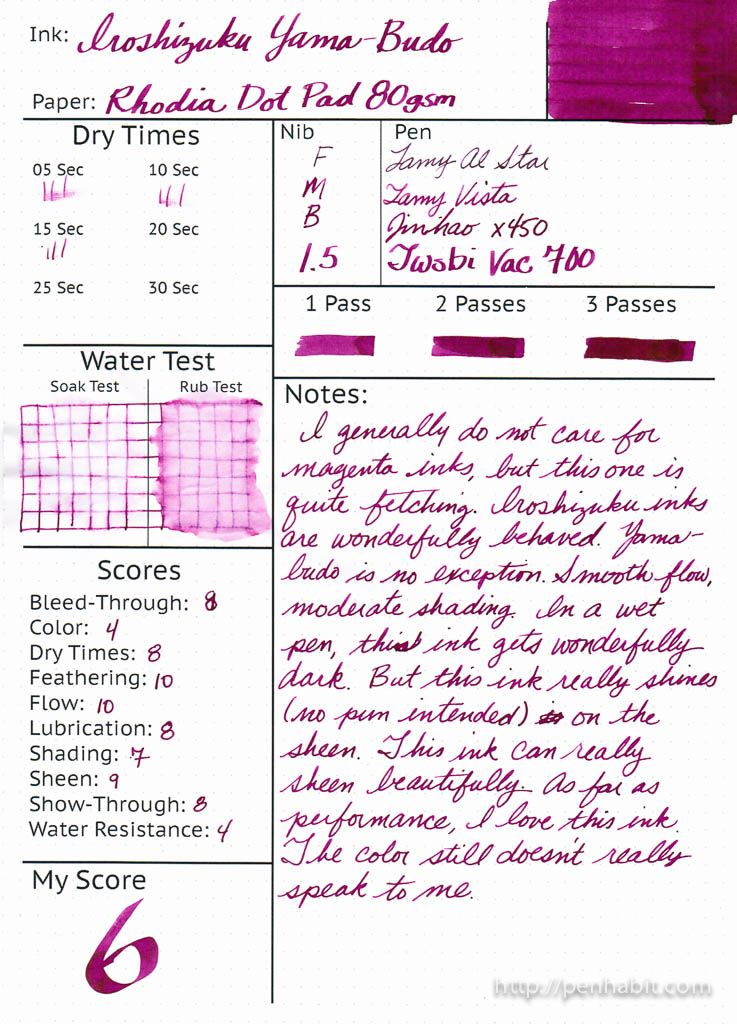 Iroshizuku.  If you’re familiar with fountain pen inks, it’s a name you’re likely well familiar with.  If you’re not, stick around a little while.  You will be. Iroshizuku (a line of inks by the Pilot Pen Company) is one of the more expensive brands of ink out there.  It also has a reputation for being one of the best brands of ink out there.  It is my opinion that this particular reputation is wholly and completely deserved.

Yama-Budo was not my first bottle of Iroshizuku ink.  (In fact it wasn’t even my 7th bottle…).  I picked up this bottle from Silberman Brown Stationers in Seattle.  I didn’t get this ink because was I gaga about the color, but rather, I wanted another bottle of Iro ink, and their stock was a bit limited at the moment.  Like all Iro inks, this ink flows beautifully.  It just floats out of the pen and onto the page.  It will behave wonderfully in almost any pen into which it is put, dries fairly well, and cleans pretty easily. Iro inks are almost always consistently and perfectly behaved, and Yama-budo is no exception at all.

However, this color is just a bit too, for lack of a better term, garish for my taste.  It is a cross between pink, purple, and red, but doesn’t really capture the best of any of them for me.  It is a wonderfully vivid color, which I do appreciate.  It shades fairly well.  But it’s just a little to close to the hot pink/magenta end of the scale for use as an every-day ink for me.  I tend toward the cooler colors anyway (greens, blues, purples) and less toward the warmer (pinks, reds, oranges, etc.).

That being said, where Yama-budo really shines is in its sheen.  For those not familiar with what that terms means, sheening is when certain particulates in the ink will reflect light differently, giving the ink a unique appearance.  Inks that sheen also tend to be some of the more valued inks in the fountain pen arena.  Inkophiles loves themselves some sheen. Some inks sheen particularly well, especially in a wet pen.  http://penhabit.com/sexy-muscle-men-naked/ is one of those. Yama-budo is another.  It’s one of the mostly highly sheening inks in my collection, and it’s the reason I find myself coming back to it as often as I do, despite the fact that I don’t love the color.  It’s got a stunningly beautiful gold sheen which you can see quite clearly some of the photos below.

One last think I have to talk about is the bottle.  I would buy Iro inks for the bottle alone. The bottles are stunning: perfectly clear crystaline glass in a nice clean ovoid shape.  The labels are clean and understated. And they actually thought about the act of filling a fountain pen from the bottle (unlike J. Herbin, for instance.)  The thick bottom of the bottle has a conical cutout, allowing you stick your pen’s nib all the way down past the bottom of the bottom of the ink reservoir, allowing you to get the most out of your bottle of ink.  Back before I knew much about ink, and the fact that you’re not supposed to leave it exposed to light, I lined these bottles up on the shelf over my writing desk. The just look impressive.

Does that make them worth 2-3 times the cost of ink from another manufacturer?  For me, yes.  But then again, looks are a big deal to me.  But even were the inks in a less impressive bottle, their consistent and nearly flawless performance would be ample reason to spend 2-3 times the money. I simply have never come across a better or more consistent brand of ink in my life.  I don’t know of anyone who has used Iroshizuku inks and had major problems with them. They just work.

So, in terms of all characteristics except color, I rank this ink very highly.  In terms of sheening, it’s one of the best out there as far as I’m concerned.  This one is great for correspondence to the right person, or for personal notes.  If you like the color, it would be a great journaling ink.  It really shines on coated papers like Rhodia or Clairefontaine.  (More absorbent papers will just kill the sheen on this ink, which is such a waste.) But I wouldn’t feel comfortable pulling this ink out for anything professional.