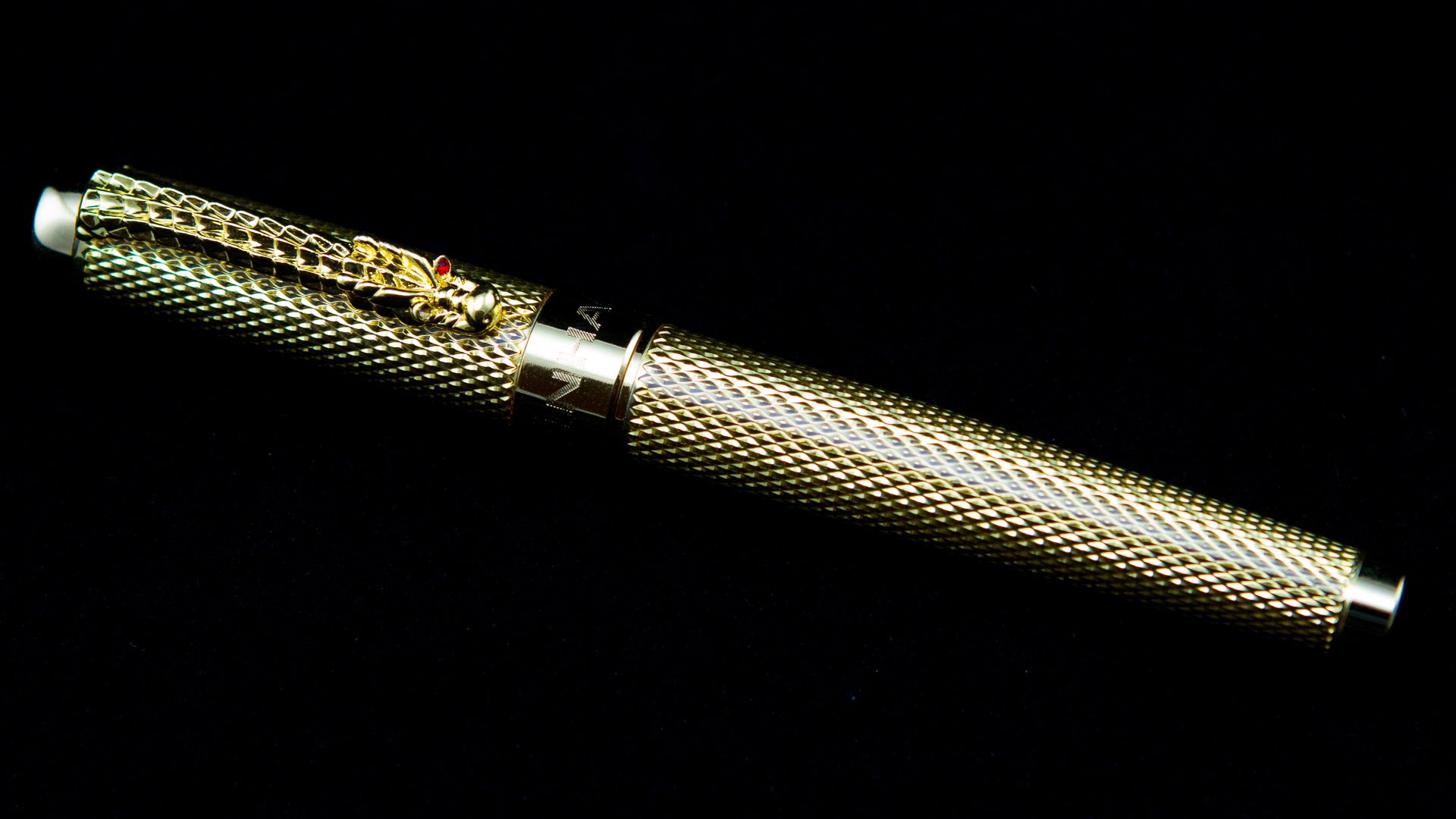 The Jinhao 1200 is, in my eyes, one of the ugliest pens I have ever seen.  It is certainly eye-catching, but probably not in the way that you might wish.  As I mention in the video above, the first time I pulled this pen out in a meeting, a co-worker leaned over to me and ask, “What the hell is that thing?”

The 1200 is a relatively heavy, metal-bodied pen.  The exterior of the pen, which is all done in a bright yellow-gold color (which, frankly looks more like brass to me), is entirely smooth, although it appears to be knurled.  Had it been knurled, that would have vastly improved the overall appearance of the pen.  Instead, it just looks like a sticker.  The pen is pretty comfortable in the hand, assuming you like heavier pens, and the section lacks the finger holds that were present on the X450.  The pen can be posted, but posting it brings the weight up to a very hefty 50 grams, and unbalances the pen quite a bit.  The dragon clip, aside from being ridiculous in its own right, is very stiff and may limit the thickness of the fabric onto which it is clipped (i.e., no jeans pockets.)  On my pen, one of the two dragon’s red eyes fell out after only a couple of weeks.

The stock Jinhao nib is a standard #6-sized nib, meaning that it can be swapped out for nibs from many other companies like Edison, Goulet Pen Company, TWSBI, Monteverde, and many more.  These Jinhao nibs are pretty good, but can be a bit inconsistent from nib to nib.  The two-tone stock nib does have a surprising bit of line variation, but does not flex easily.  I prefer using a GPC replacement nib, which makes for a much nicer writing experience.  The included converter feels more substantial than those that come with the X450, and can hold a bit more ink.  And this 1200 writes only moderately wet.  It may even trend slightly toward the drier side of moderate, but not by much.

All in all, this pen writes pretty well, especially for being a $10 pen.  However, I find it to be hideously ugly.  If you don’t, or if you like the color of the pen, by all means, this is a pen that writes well.  As for me?  Well, I’ll stick with something a little less…um…flashy.