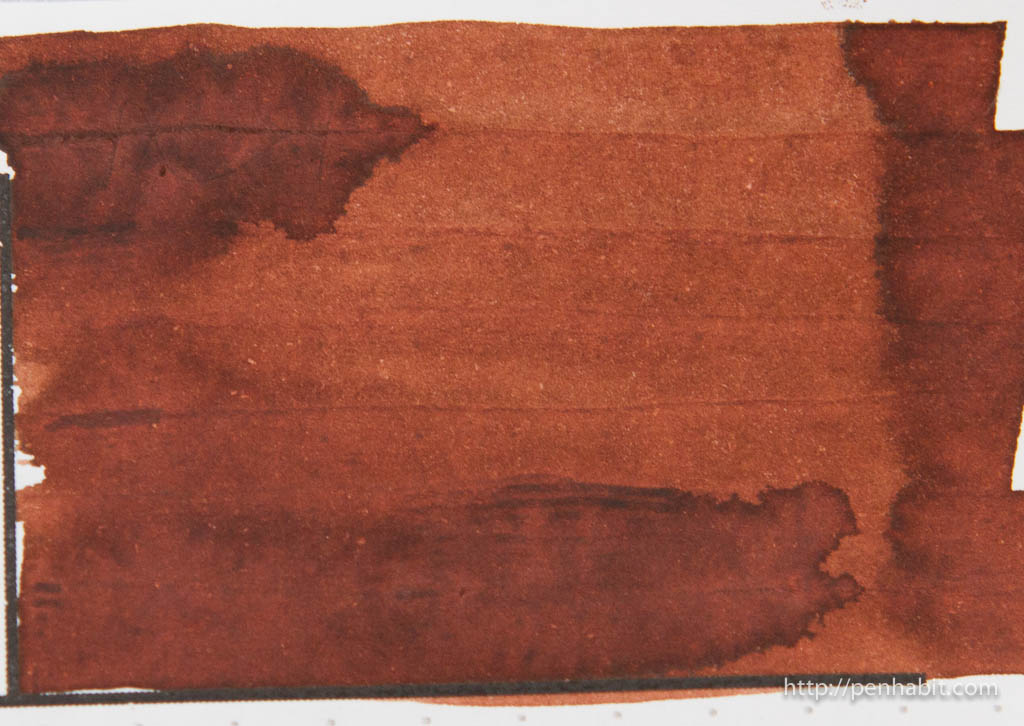 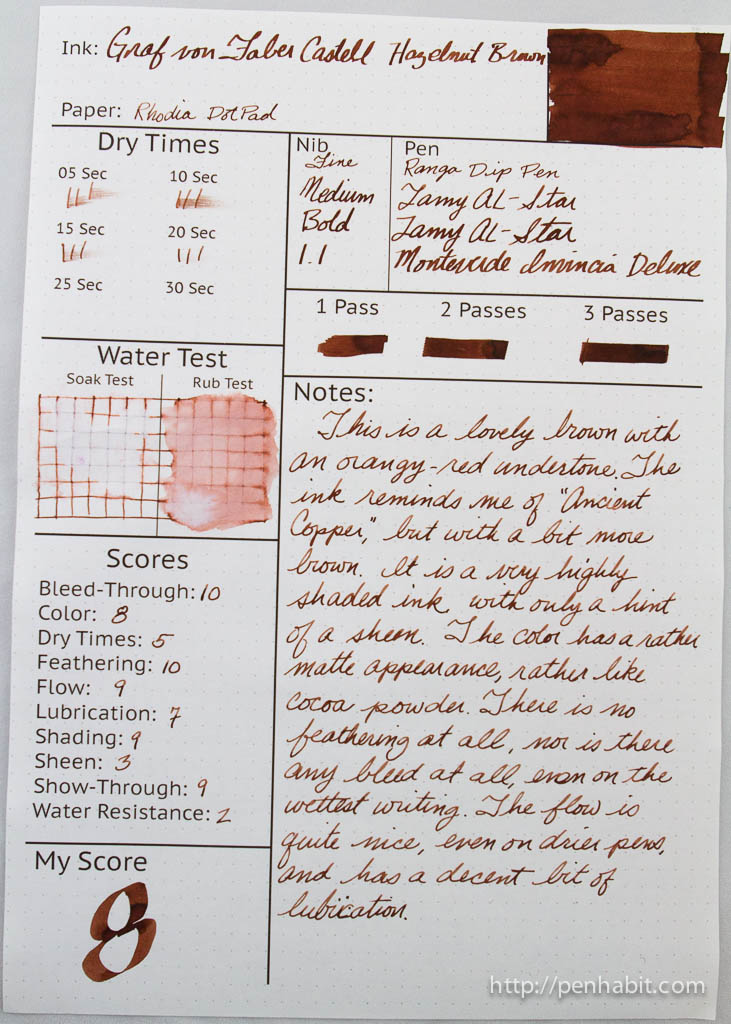 I have not had a lot of experience with the inks from the Graf von Faber-Castell line.  (Or their pens, come to think of it.)  It is priced like a luxury ink, though, and if you’ve been reading my blog, you know that I tend to like these luxury inks if for no other reason than they usually have pretty great bottles.  This ink is no exception. It is, however, quite a bit more than just a pretty bottle.

But, since we’re here, let’s start with the bottle.

The bottle on this ink is, for lack of a better term, very masculine and stately.   The long ovoid shaped bottle sits atop a clear glass shoulder, which gives the bottle a weight and heaviness you won’t see in other bottles in this price range.  The edges are slightly fluted, making the bottle feel architectural.  The cap, which is heavy and robust) is a shiny chrome color, and has a black plastic medallion with the GvFC logo.  And the paper label does a pretty accurate job of representing the color within.

Hazelnut brown is a lovely, rich chocolatey brown color, but with more of an orange/red undertone than you usually find in other brown inks.  It is also a bit lighter.  The name “Hazelnut Brown” is probably the most apt ink name I could come up with.  From that name, I had a vision in my mind of what this ink would look like, and I was not disappointed.  The more I look at it, the more I find similarities to Diamine Ancient Copper, but with less red and a deeper, richer brown color included.

The ink flows nicely, but not too heavily, in the pens in which it was tested.  It feels lubricated, but perhaps not quite as much as the inks from Iroshizuku, which live in the same basic price range as these inks.  It goes on smoothly, but with just a touch of feedback on nibs that can provide it.  The brown has a very “matte” appearance on the paper, not giving really indication of sheen.  That being said, this ink has really incredible shading.  I can’t think of another ink the brown family (that I have used, anyway) that shades as well as this ink.  Even the discontinued Caran d’Ache Colors of the Earth ink, Grand Canyon, doesn’t hold a candle to this ink in terms of shading.  The shading, which has a very binary feel to it, does give the otherwise flat color a great bit of depth.

There was zero indication of bleed-through, even on the multiple pass tests (which usually shows at least a pinprick of bleed).  It also didn’t give me a lot of ghosting on the Rhodia paper on which it was tested.

This ink is not even remotely water resistant.  The soak test leaves nearly nothing behind.

Of interest to me with this ink test was the wet inkblot.  I saw oranges and reds, which were expected, but the ink even displayed hints of blue and yellow-green.  This appears to be a pretty complex ink, with a lot of components.

I have only cleaned this ink once so far, but it appears to clean relatively easily as well.