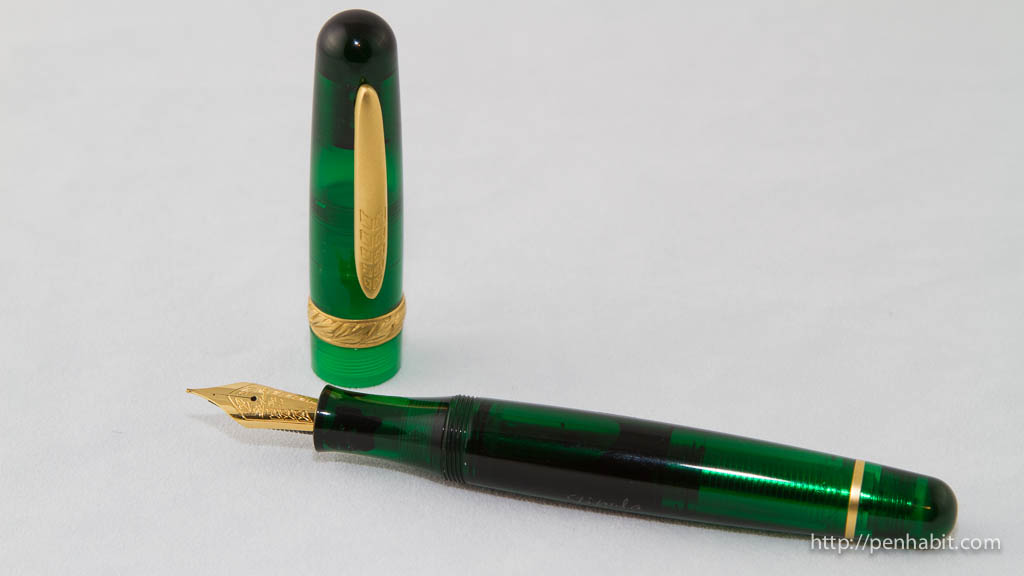 I acquired this Stipula Etruria Rainbow Limited Edition pen from Fahrney’s Pens of Washington, DC. Fahrney’s held a giveaway contest in January of 2014 to celebrate National Handwriting Day. My entry was chosen at random from the entries received. You can read more about the giveaway, and read the letter that I wrote as my contest entry here.

The first thing I did after learning I had been selected as the contest winner, was to look up the pen I had just won and start doing a bit of research on it.  Stipula is not one of the better known brands here in the United States, and I had no previous experience with the Italian maker.  The initial photos I found were a bit of a disappointment. The pen looked a bit cheap and plastic-y in the photos I had come across.  However, since the pen was free, I decided that even if was the ugliest pen in the world, I was going to enjoy receiving it.

Upon opening the box, however, I was surprised to find that the pen, far from looking cheap and Skittle-colored, was actually quite attractive.  It’s a very large pen, made of a clear, green acrylic.  It is polished to a high luster, and engraved with the Stipula logo, and the limited edition numbers.  The clip and bands are made of metal, and powder-coated (or so it appears) to make it look a bit like anodized aluminum, or (and this is the look I suppose they were going for) gold leaf.  The acrylic itself is a deep, rich green color that reminds be a little of the shade of green you’d find in those old-timey accountants visors.

There is no getting around it: this is a big pen. Much larger than I was expected, based on the photos.  In fact, I was surprised to find that it is almost identical in length and barrel width to the Montblanc 149.  The MB149 is slightly more tapered at the end of the barrel, but the sizes are very similar. The main difference, and one that gives the Stipula a step ahead between the two, is that the Stipula’s section tapers to a much more managable 10.5mm versus the MB’s rather chunky 13mm. The Etruria simply feels far more comfortable in the hand.  It is well balanced, and does not need the cap posted, but does not become overly back-heavy if you’re the kind who does like to post your caps.

The finish on the pen is quite nice.  The threads are well-machined, and fit together smoothly. The built-in piston filler operates quite smoothly as well, making for a very nice, and well-behaved, filling experience.

The high-gloss finish coupled with the clear acrylic of the pen does mean, unfortunately, that the pen picks up oily fingerprints like crazy. I often find myself wiping the barrel clean several times a day, because I like that shiny, glossy finish–it just doesn’t last very long when you start handling the pen.

The heart of any fountain is the nib, of course. And, as nice as the Stipula looks, and as well built as it appears to be, the nib had some issues out of the box.  This pen comes with either what Stipula calls a T-Flex nib or with a 14K Gold nib, which is what I got with my pen. I have never used the T-Flex nibs from Stipula before, but they claim you can write from Fine to Broad with the application of varying bits of writing pressure.  The 14K nib, however, does not have that much give to it.  It’s not a nail, but it’s not really flexible in any sense of the word. It has only a very slight bit of “bounce” to the nib, which can provide a minor bit of line variation.

However, one area where pressure does make a difference is in the area of ink flow.  If you’ve got an ink that shades well, applying an extra bit of pressure on your down strokes will really make the ink sing.  The pen does run ever so slightly to the dry side of a medium flow, but it is never dry enough that it stands out. I just wouldn’t classify it as a “juicy” nib. But apply a bit of pressure, and you’ll get a nice healthy ink flow.

The other, and much bigger issue with this Etruria 14K nib was the infamous “Baby’s Bottom” syndrome.  The nib, out of the box is exceptionally smooth. Really, it is too smooth.  The nib appears to have been over-smoothed at the factory, and as a result, I experienced significant skipping and hard starting.  Enough so that, in its default form, the pen was practically unusable.  Additionally, I found the nib’s “sweet spot” to be exceptionally small, and as I have a tendency to roll my pen to the left as I write, I would often find myself out of alignment with that sweet spot.  My first couple of pages of writing were not a pleasant experience.

I did some investigation of the nib under a loupe, and the tines were perfectly aligned, which I would suspect as the writing was so smooth.  I did, however, see evidence of a bit of over-polishing on the nib tip.  A few passes over some 2500 grit sandpaper to knock down the baby’s bottom problem, and a touch of smoothing on some MicroMesh and Mylar sheets, and now the pen writes like a dream. I didn’t loose any of that incredible smoothness, and I have completely eliminated the hard starting and skipping issues.

The fix was fairly easy, and I am personally relatively comfortable with the process of making those adjustments.  But for a pen that costs as much as this one, I would have been slightly disappointed to receive it in its original condition had I paid for it.  (In fact, I probably would have sent it back.)  Remember, kids, smoothing a nib will almost certainly violate a pen’s warranty, so if your pen is under warranty, don’t do it!

Now that I have the nib writing the way I like, the Etruria is a true joy to use. It has the heft and gravity of a MB, but the fact that it’s a colored demonstrator gives it a touch more fun and whimsey. I find the pen exceptionally comfortable to use for long periods of time, particularly with the tapered section and the way that Stipula has discovered to get the barrel threads low enough and out of the way so they don’t even feel like they are there.

I’ve used the pen for several long letters, and haven’t experienced any hand cramps or tiredness.  (In fact, it’s responsible for a couple of InCoWriMo letters that will be going out on Monday.)  The pen’s modest weight is hefty enough that I can tell it’s there, but not so heavy that it feels like work to use it.  It’s a very nicely balanced, and comfortable-in-the-hand writer.

Now that this nib has been adjusted to my personal tastes, I suspect this pen will very quickly work its way up my favorite pens list, and may even supplant my MB149 in the top 10.