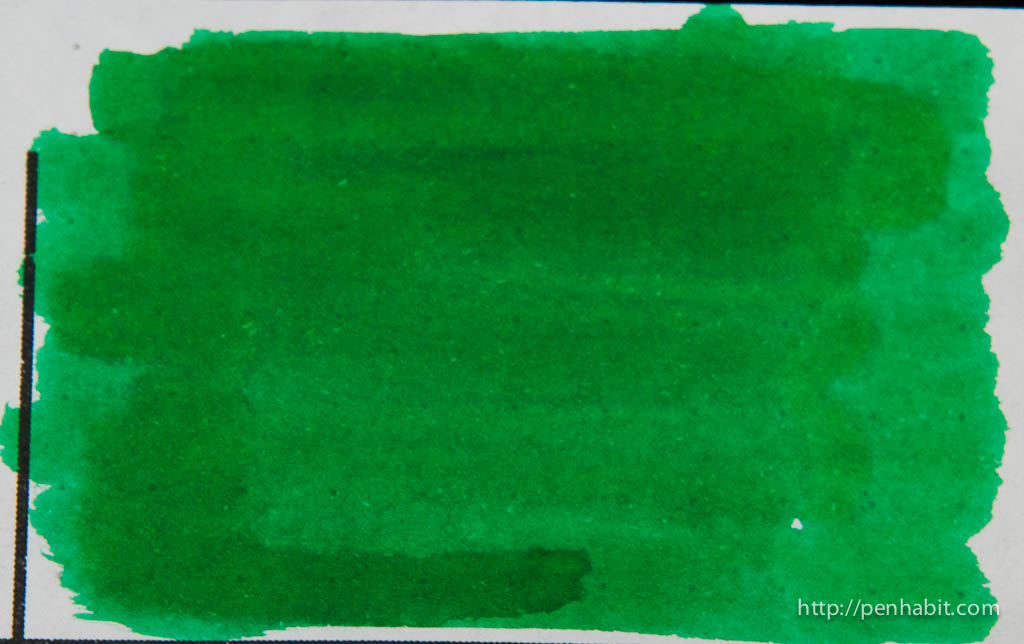 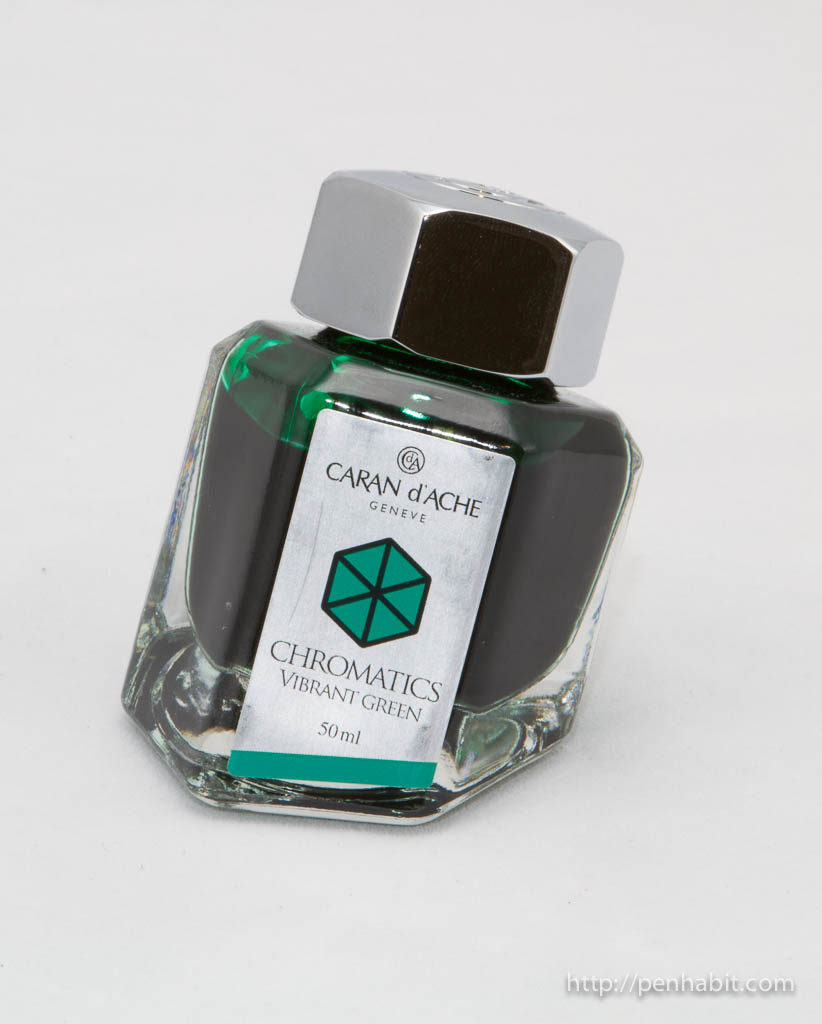 When Caran d’Ache announced that they were going to be discontinuing their very popular (and, in my own opinion, very beautiful) Colors of the Earth line of inks, a collective cry of despair went up among inkophiles of the internet.  Colors like Amazon, Grand Canyon, Caribbean, Storm, Saffron, and Sunset were quite well liked, well behaved, and were some very unique and beautiful colors.  We went through a long wait to hear what Caran d’Ache would be replacing these beloved inks with, and when their new Chromatics line was announced, the reaction was…rather muted.  Fortunately, fountain pen people are generally not the quick-to-blow-a-gasket-type, and approached it with a let’s see attitude.

The new Chromatics line comes in a 50ml hexagonal bottle whose bottom is cut at a slight slant, causing the bottle to sit an an angle for easier filling.  Many thought the design was on the silly side.  I really like the bottles. They’re unique and pretty, and unlike many inks bottles–including the bottles in the Colors of the Earth line–it’s actually designed to be practical and useful.

Aside from the bottles though, there was a lot of online discussion about two other aspects of this new ink: the colors, and the price.  The colors that Caran d’Ache chose for this new line were in the same families as the old colors, but lacked some of the magic that the old colors seems to exhibit. And then there was the price.  Ounce for ounce, these Chromatic inks are some of the most expensive inks on the market today–more expensive even than other luxury inks like Iroshizuku or Edelstein.

But what about the inks?  Well, the Chromatics became available in the US just recently, and I decided to start with my go-to color: green.  Chromatics offers two green offerings, and I picked the Vibrant Green color.

Vibrant Green is a beautiful emerald green color, with just a hint of blue undertones to it.  It is a lovely shader, and does have a minor sheen.

Unfortunately, that’s about where my praise for the ink ends.

For the most part, I find Vibrant Green to be a “moderate” ink. It has a moderate flow. It has moderate lubrication. It has moderate sheen. There is very little that sets this ink apart from middle-of-the-pack inks, and even less that sets it apart from its luxury ink competitors. It does its job, and it writes well enough, but there’s nothing special about it.

Except the dry times.  They’re pretty special. And, as my daddy says, “There’s all kinds of special.”

On cheap paper, the dry times for this ink are pretty good.  It soaks into the paper, and only exhibits minor bleed-through in a moderately wet pen.  But on any sort of treated paper (Rhodia, Clairefontaine, Tomoe River), the dry times on this ink are ridiculous. My tests only go up through 30 seconds, and even at 30 seconds, I saw very little in the way of actual drying that had occurred.  And, based on the performance I’ve seen from other inks in the series online, this is not unique to this color.  Now, the way I write doesn’t often have me reaching for a quick-drying ink, but the dry times on this ink would cause me to think twice about using it for anything other than letters for which I would only write on one side of the paper.

The dry times, coupled with a lack of any other special features, makes this ink unacceptable for most uses in my writing life.  I love the bottle and the packaging, but the high price tag coupled with an ink I couldn’t use in most situations means that I will usually turn to other green inks before this one, and that I probably won’t purchase any additional inks in the Chromatics line.

And, it makes me glad I stocked up on Grand Canyon before my local retailers sold out of it.