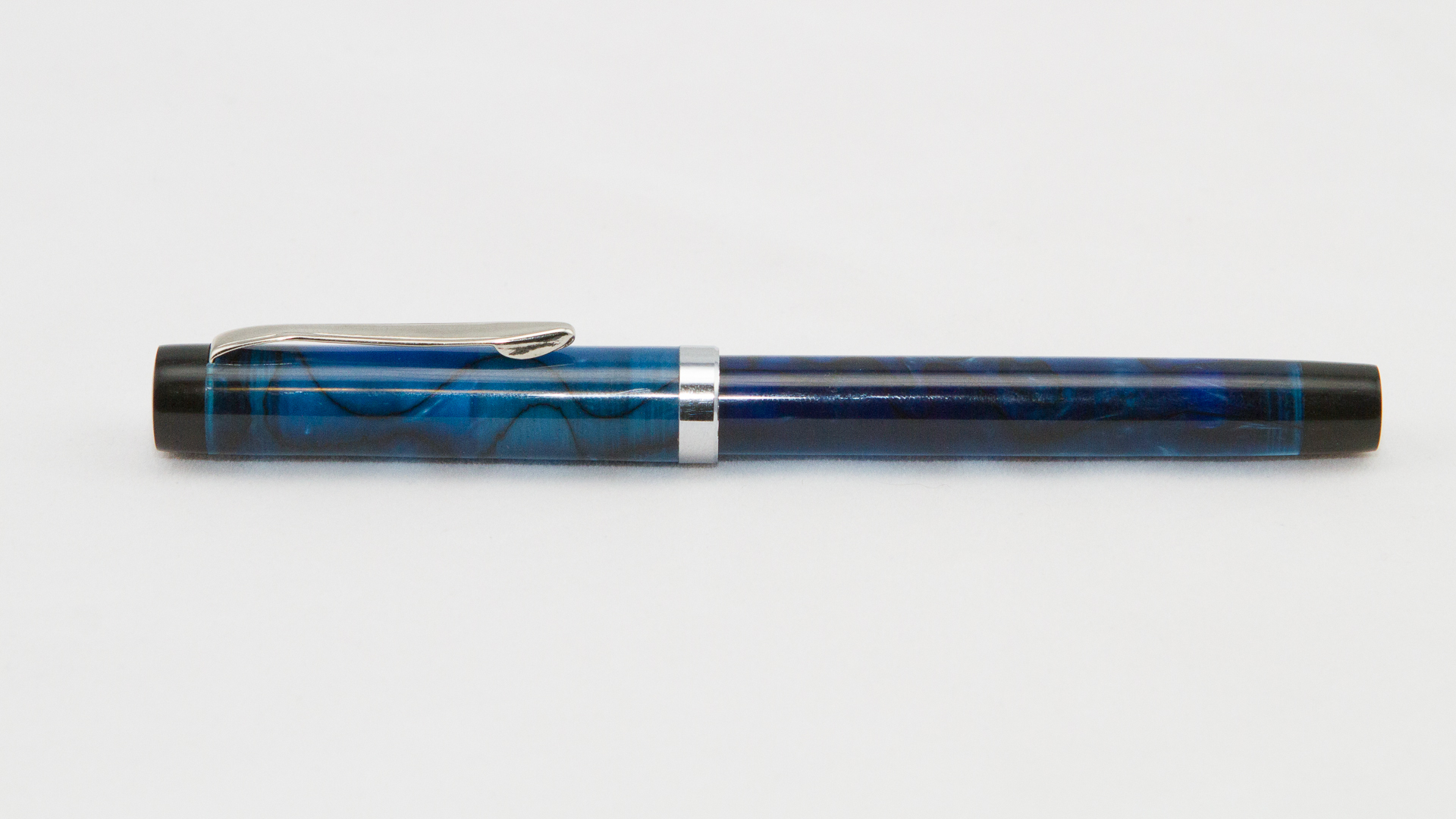 Recently, a viewer of my fountain pen videos sent me a Facebook message and suggested that I look at pens sold by the website, FountainPenRevolution.com. FPR, as I will call them out of sheer laziness, is a US-based company founded by a gentleman who has spent a great deal of time travelling in India, and was impressed by the range and quality of fountain pens that are available in that country.  Orders from FPR are drop shipped from India to locations all over the world, for a very low flat rate (I believe it’s $3 despite what I said in the video), regardless of the number of pens you purchase.

Curious, I purchased several pens from FPR, as well as a few replacement nibs, and waited the two and half weeks it took for the pens to arrive to the U.S. from India.

The first pen I inked up is the FPR-branded Triveni Acrylic, named after a confluence of three rivers in India. Made of a truly beautiful blue pearlescent acrylic, the Triveni is a relatively long pen, at 134mm uncapped and a truly mammoth 180mm posted.  It’s a cartridge/converter pen, and comes with an all-plastic, plunger-style converter.  It also comes as eyedropper-ready, with an all-acrylic body and the threads between the barrel and the section pre-silicone greased.

Overall the Triveni is quite comfortable to hold in the hand, as a very light 10g (unposted), and a nice, gentle taper from the 12mm barrel to the 10mm section.  The threads are well cut, and aren’t sharp at all, so it would be possible to hold this pen directly on the threads without too much difficulty.

However, not all was ideal with the Triveni.  I ordered the pen with a Fine Italic nib. As far as I can tell, the nib it arrived with was a regular fine nib, not a fine italic. And it was horribly scratchy…nearly to the point of being unusable. I also ordered a medium nib which I swapped into the pen almost immediately. The medium nib was not discernibly any wider a writer than the fine, which I would classify about the same width as a European extra-fine. It was also terribly scratchy.  Fortunately, with some adjustment, I have gotten the pen to write quite nicely.

The feed on this pen does an admirable job keeping up with a lot of fast writing, particularly in eyedropper mode.  I did experience a few issues with inkflow when I used the converter.  Supposedly, this pen can use standard international converters and cartridges, but I was unable to get any of my Schmidt-style converters to seat properly on the post of the pen.  Generally speaking, I would recommend this pen as an eyedropper, as the barrel has a staggering ink capacity.

The second big issue I had with this pen is around the fit of the nib and feed in the section.  They are extremely loose–so much so that any minor radial pressure will actually result in the nib rotating around the feed in the section. I attempted to replace the supposedly standard #5-sized included nibs with a Bock and a (Jowo-Made) Edison nib, but neither of those nibs fit particularly well, either.  As a result of this loose fit (possibly in combination with the fact that I’m using the pen as an eyedropper), I have experienced repeated instances of the pen blurping ink on the paper while writing. As a result, I find myself every now and again holding the pen for a few moments with the nib upright to allow the air pressure to normalize. I suspect that with a more tightly-fitting feed and nib, a minor buildup of pressure in the barrel of the pen wouldn’t trigger a “blurp” quite so easily.

And finally, one minor issue with the pen I had is around the clip, which feels flimsy and easily bendable.  The end of the clip is stamped and bent into an ending shape, but it wasn’t bent fully/properly, and I find the inside of the clip gets caught on the inside of my shirt pockets or in the elastic straps in my pen case.

As I mention in the video above, I feel like the material on this pen is quite lovely, but some of the fit and finish isn’t as fine-tuned as I would like…particularly when I compare the $45 Triveni with other pens in this price range (like the Monteverde Impressa). The material of the pen is quite nice, but the quality issues will prevent this pen from being an everyday carry for me, and will instead result in my dedicating the pen to one of the “trouble” inks like Baystate Blue. Now that the nib has been fixed, and I have figured out how to prevent blurping, the pen writes nicely, with a moderately smooth, wet line. But I just don’t feel as though I can “trust” this pen enough to use it as a daily carry.