MattPosted on May 22, 2014 Posted in Pens, Review No Comments 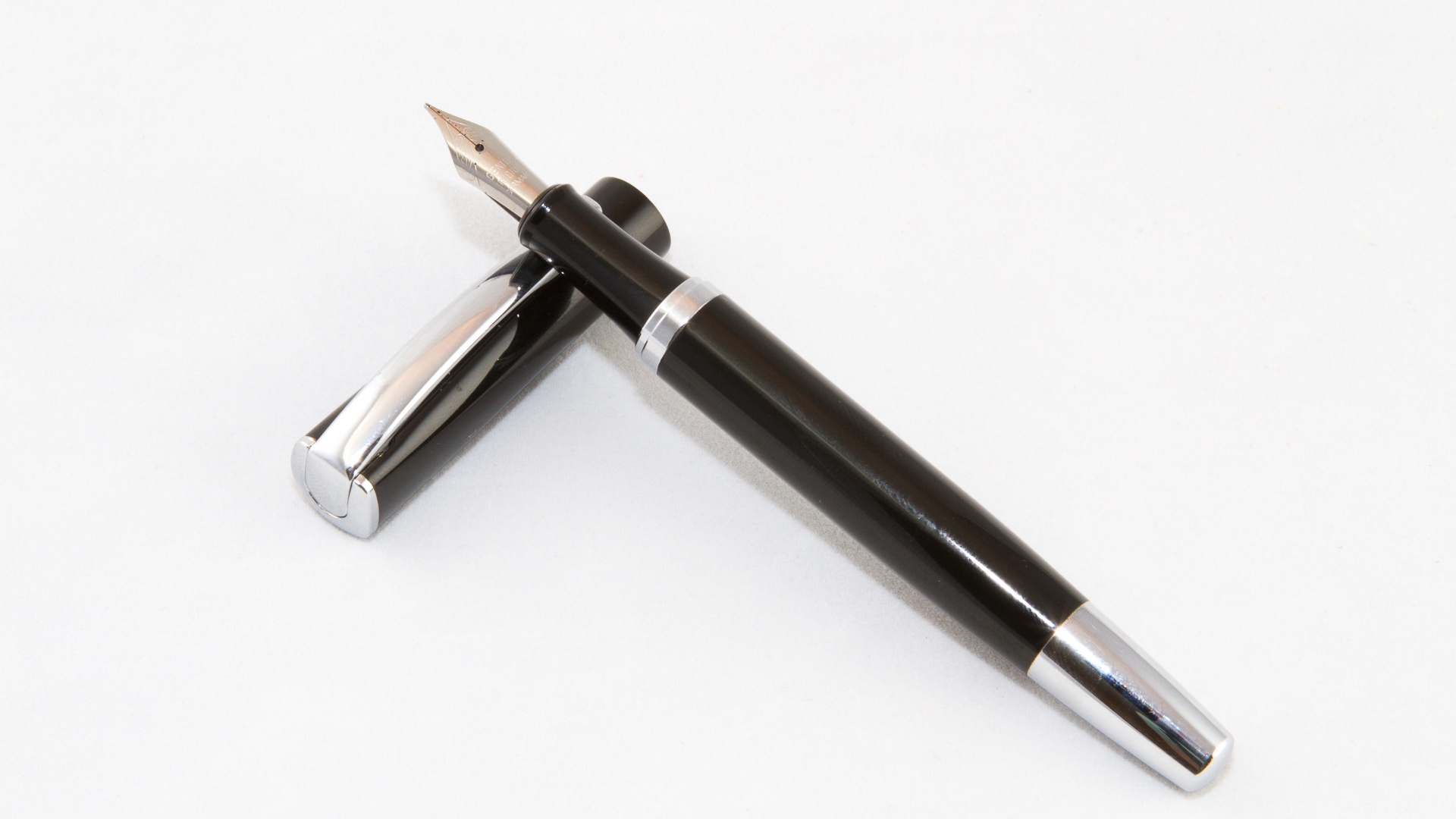 I have received a lot of requests lately to do some reviews of less-expensive pens. This is actually fortuitous, because if I keep spending money I don’t have on expensive pens I don’t need at the rate I have been, I will wind up in the poor house before too long. I’ll be able to write some lovely letters from the poor house, but I suppose that’s not the point.  I’ve been meaning to explore some more budget pens, and this review will kick off a string of them.

If you have seen my review of the Monteverde Impressa, you’ll know it is a pen that I like a great deal. At $40USD, I consider it to be one of the greatest values in pens today. While not everyone has had the same experience I have, my Impressa was a beautiful pen with a wonderful nib that wrote wet, smoothly, and without requiring one iota of adjustment on my part.  Plus, the gunmetal and red metal finish are stunning to behold.

Well, it was brought to my attention that the Impressa is an almost identical pen one by Chinese penmaker Baoer: the 051. I did a bit of eBay trolling, and sure enough, they are very, very similar.

While I don’t find the finishes on the Baoer version of this pen to be as interesting as those on the Impressa (they are more understated), the shape of the Baoer is nearly identical to that of the Impressa (at least when capped). There are a few small cosmetic differences between them (different sized center bands, slightly different sizes in the end cap) but for the most part, they are the same pen. 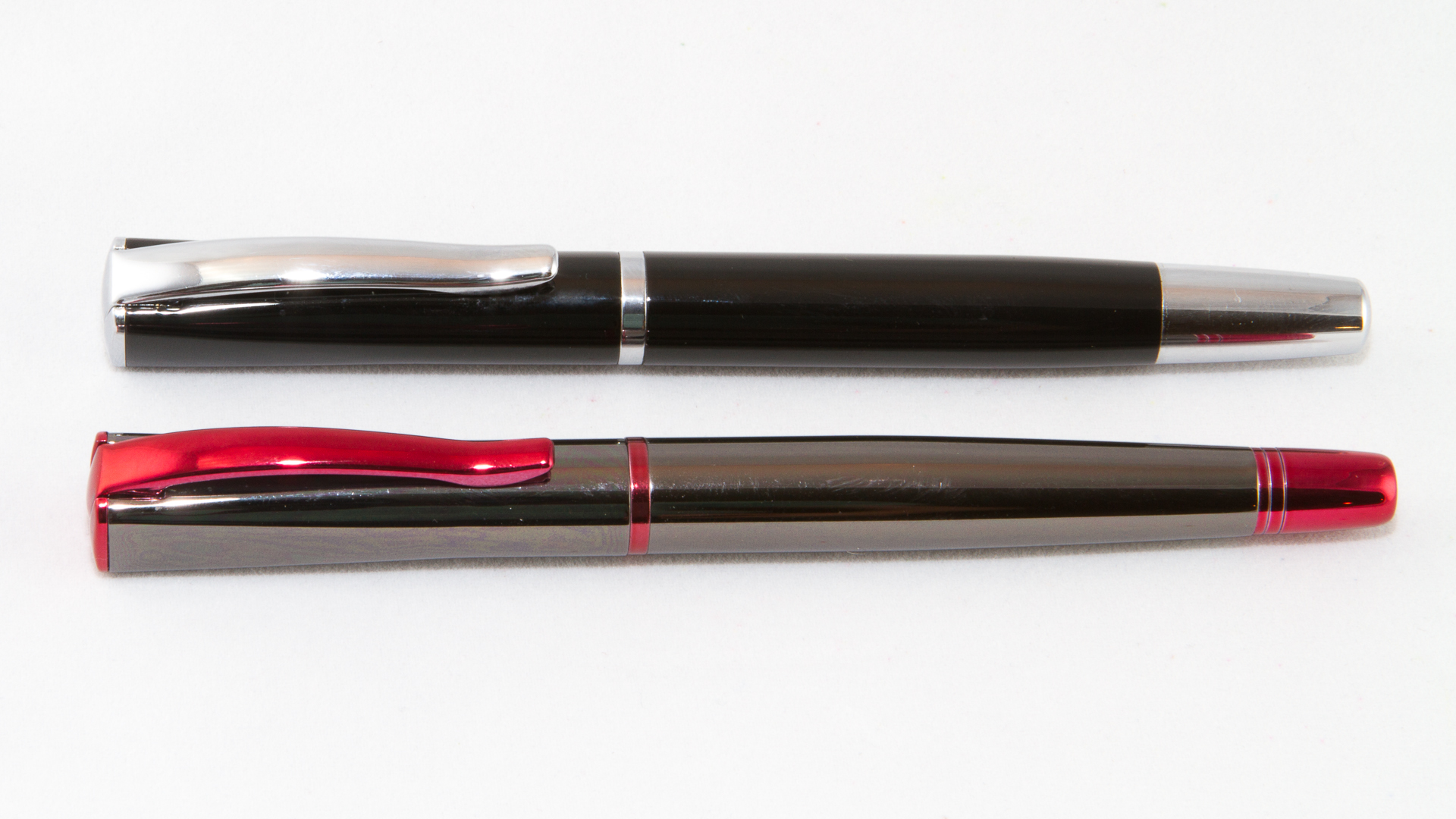 Comparison to the Monteverde Impressa

The real difference between the pens becomes apparent when you take off the cap, however. The Impressa has a metal section that matches the body of the pen. It also uses a larger #6 nib. The section on the Baoer is slightly shorter, is made of plastic, and houses a smaller #5 sized nib. The section is also just a touch narrower than I generally prefer. As a result, I find myself gripping the pen higher up on the body to get a comfortable grip, which I don’t particularly like. In this case, I prefer the Impressa. I also find that, because the section on the Baoer is plastic, the meshing of the threads between section and barrel feels a little rough in a way that the threads do not feel on the Impressa, where it’s metal on metal.

Those are really my only complaints about the Baoer. It’s an attractive pen, with its square top slowly swooping into a rounded shape. While the finishes aren’t as interesting as those available on the Impressa, the build quality is still solid.

The #5 nib on the Baoer is decent, but not great. It runs a touch dry for my tastes, but was surprisingly smooth. I will eventually do some work to open up the nib a bit, but it writes quite well, all things considered. As I mention in the video, though, these lower-priced pens can be a little sketchy on the QC, so just because I had a good experience, it shouldn’t necessarily follow that you will as well. However, even if the nib you receive is a dud, because it is a #5 sized, nib you can always buy a replacement.  (Edison sells #5 nibs, as does Franklin-Christoph and several other retailers and manufacturers.)

The Baoer 051 is still fairly comfortable in the hands.  Because the section is plastic, I do miss some of the downward pull I got on the Impressa due to the heavier metal section. However, even with the Baoer posted, it is still relatively well balanced. And, because it posts so deeply, the posted pen isn’t so long as to become unwieldy.

The final thing I want to mention is the knockoff factor. I don’t know what the relationship is, if any, between Monteverde and Baoer. I suspect, although I have no way of proving or disproving, that Monteverde is working with Baoer to have them manufacture their pens. I suspect Monteverde took the basic design of the 051, made some changes to the design and the finish, and had Baoer replace the section with a larger one. (It is my understanding that Monteverde has their pens manufactured in China, so that’s not outside the realm of possibility.) If that is the case, then I don’t see a problem with the Baoer 051. However, if the 051 is a knockoff of the Impressa, that’s where I do start to have a problem with the pen. I, just on principle, prefer not to give my money to companies that blatantly steal other manufacturer’s designs wholesale. (Hero, I’m talking to you…)

Of the two pens, there is no doubt that the Impressa is the better pen. It has nicer finishes, a better section, and a larger, more refined nib, all of which make for a better writing experience. For me, the extra $32 in the price of the Impressa is a small price to pay…especially when I can return the pen to a US-based retailer if something goes wrong with the pen. The Baoer 051 is an $8 pen (shipping included!). As such, it is an incredible value. But, if something goes wrong with the pen, good luck getting support from your eBay seller. You can’t expect much in the way of support for an $8 pen with free shipping. Do I like the Baoer? Yes. Do I like the Impressa better? Absolutely. But if the Impressa is out of your price range, then the Baoer is an excellent alternative.

Comparison to the Monteverde Impressa

Clip comparison to the Monteverde Impressa