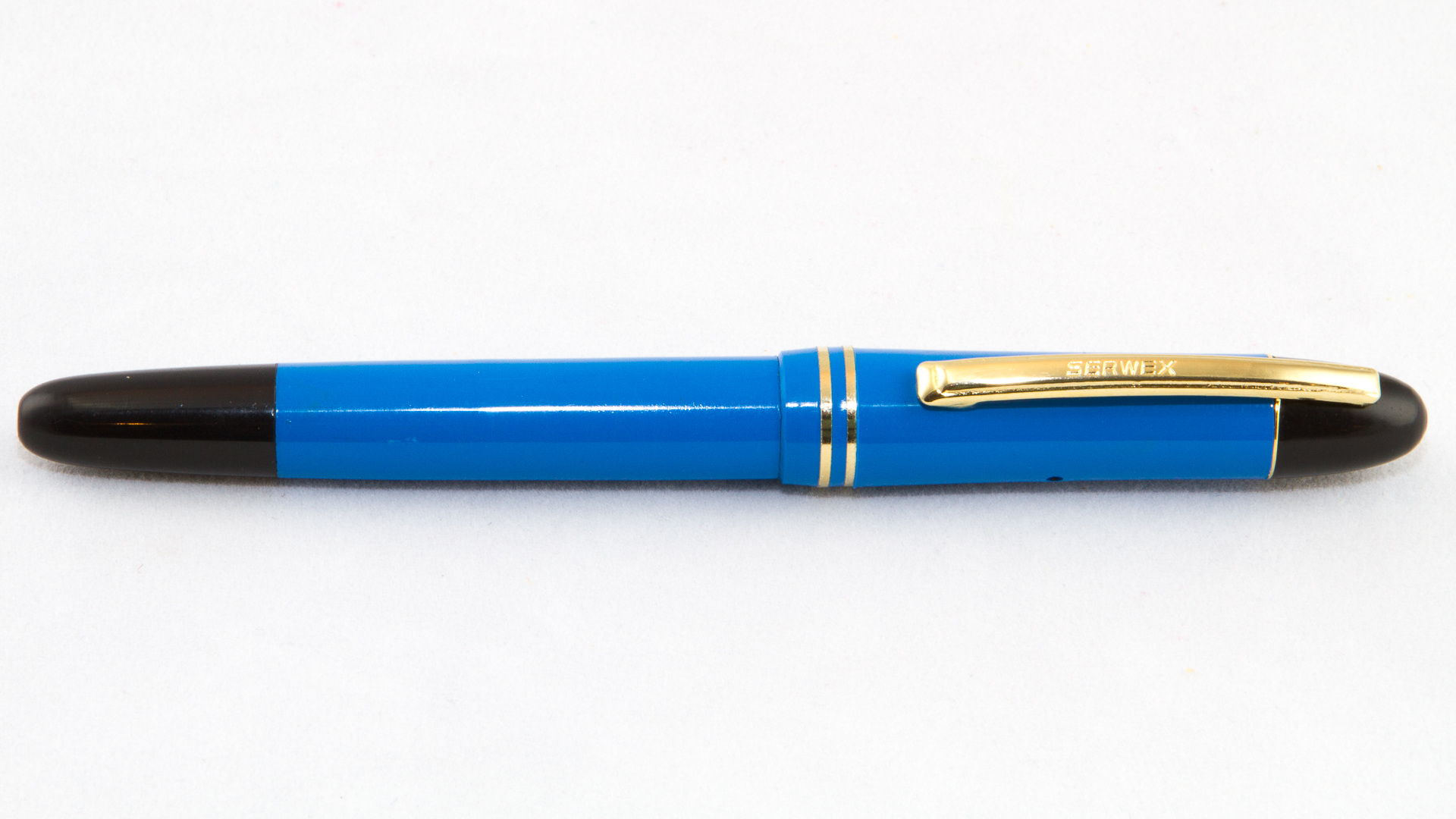 The Serwex 1362 is another in a line of low-cost Indian-made pens that I’ve had the opportunity to try out lately.  It is also, I’m surprised to say, one of the most solid entries of this type. A good reviewer attempts to approach his or her reviews from a standpoint of objectivity, not bringing any preconceived notions to the review. I, however, was not able to do that. I inked up this pen fully intending to dislike it. Perhaps even a lot. The pen surprised me a bit.

At a staggeringly-affordable $6, the Serwex 1362 is a rather small pen. It’s smaller than I normally prefer; however, it can be posted making it quite usable. The plastic used to make the pen has a rather cheap, rubbery feel to it, but seems solid enough. The miniature cigarette shape comes in a whole variety of bright colors (blue, yellow, red, green, and pink). The cap has a fairly solid-feeling clip and a couple of gold-colored metal accents at the rim of the cap.

Once you remove the cap, you’ll notice that the pen has an honest-to-goodness ink window.  That’s right, boys and girls. This $6 pen is a piston filler. I believe this is the most affordable piston filler pen I’ve ever seen since I began using fountain pens. I was surprised at how well the piston worked inside the pen, and there appeared to be no excessive resistance or issue with turning the filler nob at the end of the pen. Obviously, with such a small pen, the ink capacity is smaller than it would be for a larger pen, but still, a $6 piston filler is pretty impressive.

The pen uses a FPR-branded #5-sized nib. (I got the medium).  On my pen, the medium was a bit scratchy, and required  some smoothing work. This seems to be a common theme with every single Indian-made pen I’ve ever purchased. They just don’t seem to spend much time with tuning the nibs. So, it’s almost a certainty you’ll need to smooth the nib when it arrives to you. Fortunately, at $6 (with replacement nibs being as inexpensive as $3), this is a pen that would be great to practice your smoothing on. Frankly, if you’re a fountain pen user who doesn’t know how to smooth nibs, you should learn post-haste. It’s an invaluable skill.

Once the scratchy nib was smoothed, I was actually pleased at how well the pen wrote. It laid down a nice, moderately wet line, and had no issues keeping up with me on longer writing sessions. I should note that the nib provided on my pen appears to be rather different than the nibs displayed on the website for this pen. I’m not sure why the change, but the Serwex nibs that are shown on the website don’t appear to match what I received. Also of note, these Indian nibs run narrower than the name might suggest. My medium was more like a fine.

As I explain in my video review, the pen isn’t perfect. It’s made from cheap materials. My pen came with a couple of scratches and an decent-sized gouge in the cap. It looked as if it has been worn a bit, even when I received it as brand new. And, on my first inking, I actually found most of the ink had wicked out of the pen and into the cap. However, after that first occurrence, that never happened again, so it may have been a fluke.

Overall, I have to say I was pleasantly surprised at this pen. Due to some less-than-spectacular experiences with some of these Indian-made pens, I was expecting to really dislike this pen. But, despite being the cheapest of the pens that I purchased from this batch of pens, it was actually quite a decent little writer. It’s a “beater pen” for me: a pen that I can take anywhere and not worry about it getting stolen or broken. I would lend this pen to a co-worker (now that I have the nib smoothed) instead of one of my more expensive pens. Can I say I love this pen? Not really. But it’s a pen that I will keep around and still use on occasion, which is more than I can say for a lot of other pens.