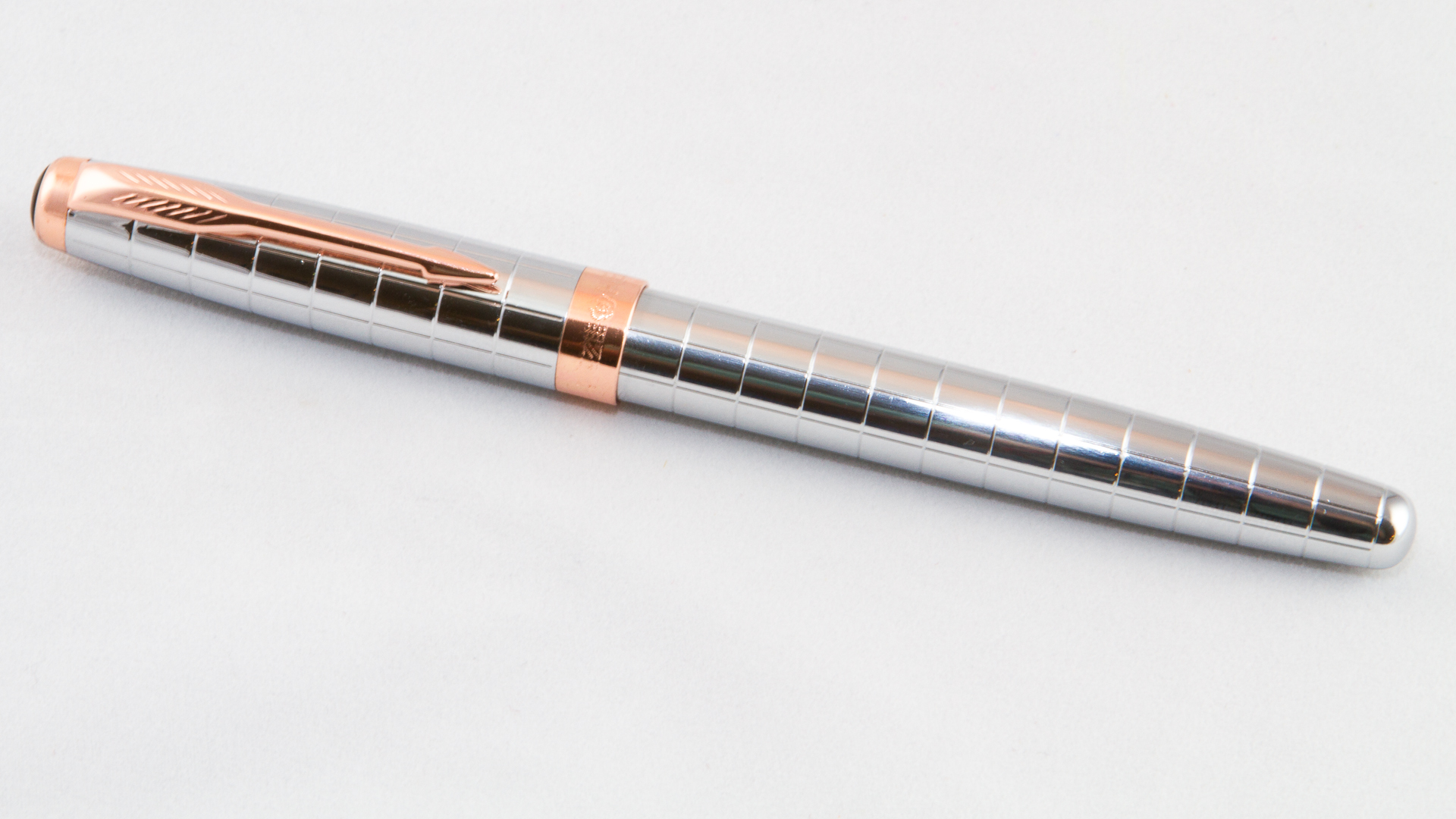 The Hero 9315 (which, to my shame, I refer to as the Hero 3915 throughout most of the video above) is yet another in a long line of Chinese-made pens that, to put it charitably, “borrows” design elements from other pen manufacturers of the world. The 9315, in particular, takes most of its design queues from the Parker Sonnet Cisele. Despite its dubious design pedigree, however, the Hero 9315 is an attractive and solidly built pen. 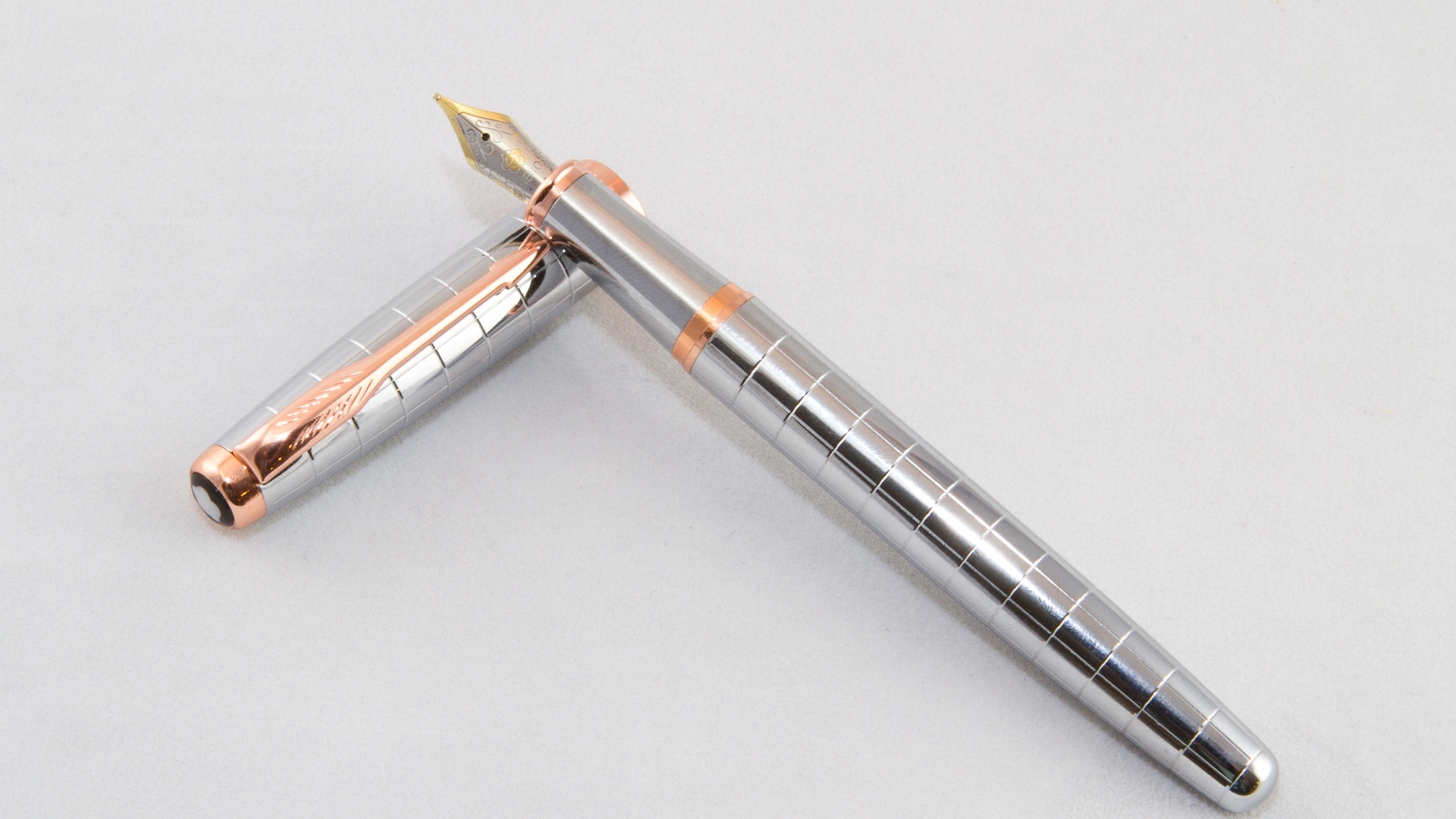 The metal body of the pen is of a chromed metal, with chiseled grid lines running across the body and cap. The cap’s finial is, rather humorously, a ripoff of the Montblanc logo. Instead of the six pointed star of Mont Blanc, the top of the cap has a five-pointed white star on a black background. The quality of the assembly on the finial is relatively poor, though, and the surface is a bit rough feeling.  The appointments on the pen are plated in a rose gold-colored metal, including the clip, which is a blatant rip-off of the Parker arrow-style clip.

The pen’s cap pops off to reveal a metal section in the same shiny, chromed metal finish. It should be noted that if you’re the kind of person who can’t handle fingerprints on your pen, you’re going to want to give this pen a pass. You will get fingerprints all over this pen’s shiny surface. Fortunately, a quick wipe on the shirt, and you’re back in business.

The included nib is a bi-color stainless steel nib. Of minor complaint is that the yellow gold-colored plating on the nib doesn’t match the rose gold-colored trim. Frankly, the pen would have looked a lot better with a plain silver stainless nib. The nib is a standard #5-sized nib, so it can be swapped out with nibs from other manufacturers.

The pen is a cartridge/converter pen, and accepts standard international cartridges and converters. I would assume it can handle long cartridges but since I don’t use cartridges, I have no way of verifying that.

Overall, the pen feels solid. It is a nice size, albeit a touch smaller than I generally like. As a metal-bodied pen, it has a decent weight, but not so much that it is unusable. And while the cap is postable, it does feel a bit back-heavy due to the weight of the cap.

As for writing, out of the box it was a decent writer. It ran a bit on the dry side, but despite that, was fairly smooth. After recording the review above, I took the opportunity to swap out the nib with a #5 Franklin-Christoph steel nib in medium. Almost immediately, this pen went from being an okay writer to being a wonderful writer. The wetness increased, the smoothness was spectacular, and the pen just sang when it was put to paper. At $8, it was a decent pen. at $28, it was a wonderful pen, and well worth the additional cost of a new nib.

Overall, this pen is one of the nicer of the cheap Chinese pens I’ve used. It feels solidly built, it writes well, and it uses standard nib sizes allowing me to swap out the nib with other, more finely-tuned options.