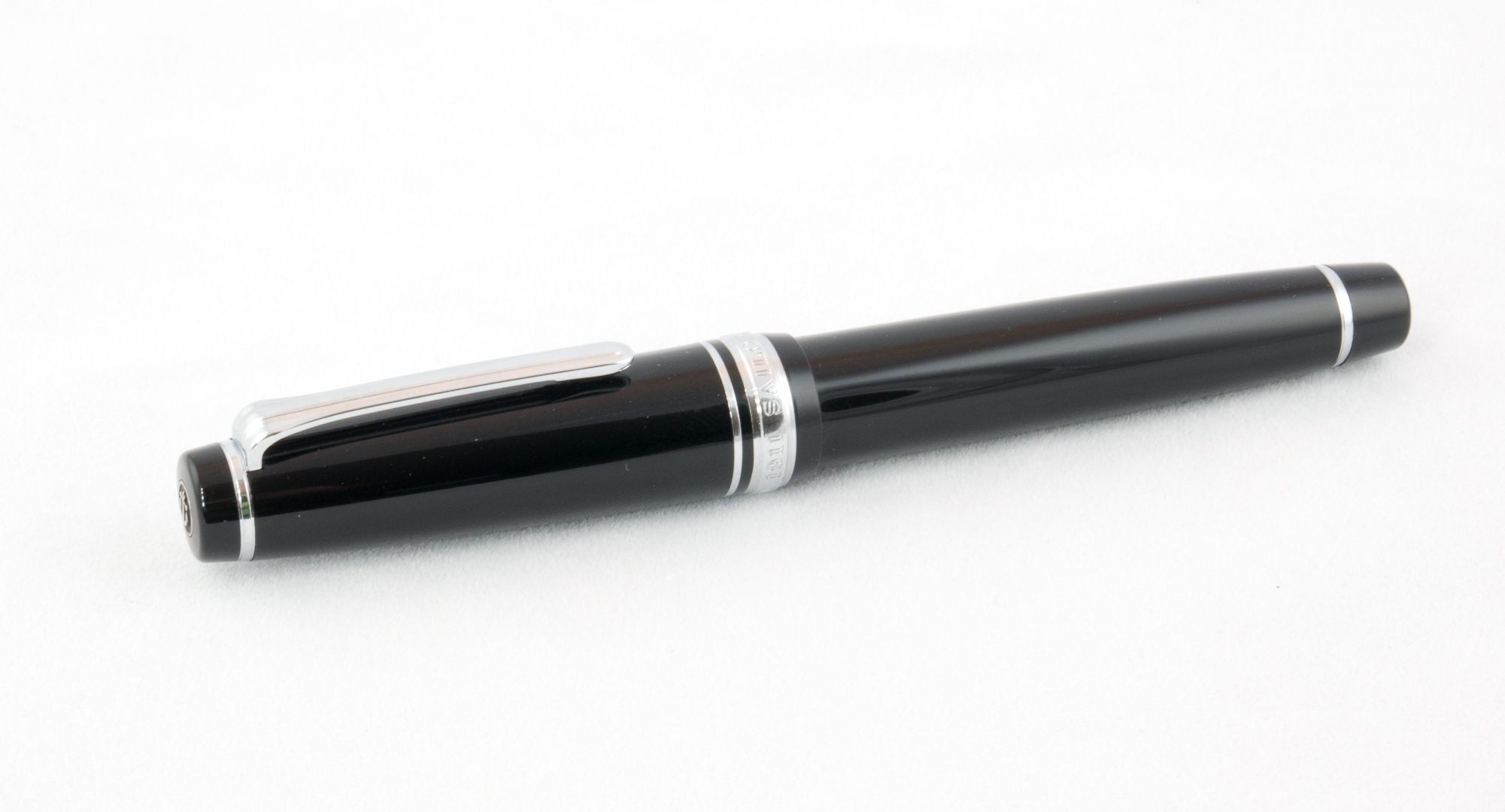 Sailor’s pens have been on my want-to-try list for a long time. I have had more than a couple of pen pals express to me that Sailor’s nibs are truly wonderful. I’m not entirely sure why I haven’t gone out of my way to get my hands on Sailor’s pens before now. There are no Sailor dealers in my area, and their pens aren’t exactly low-end writing instruments. As mentioned in previous reviews, one a pen gets to a certain price point, I really do prefer to hold the pen before committing my money to purchasing it.

Fortunately for me, viewer Rob purchased a Sailor Professional Gear from the folks at Classic Fountain Pens (nibs.com), and had them ship it to me. I was intending to send the pen on to him, but while cleaning it after the review, the pen took a nose dive onto my oak floor, and I just didn’t feel right sending a pen that had been adjusted by nibmeister John Mottishaw on to him after being damaged. So, Rob got a new pen, and I got a Sailor that needs to be sent back to a nibmeister for a bit of repair and a regrind.

The Sailor Professional Gear continues the Japanese pen tradition of very classic and understated shapes and materials, with a high level of manufacturing quality.  The flat-topped pen is made with a highly polished black resin, and uses rhodium-plated access for clip and trim. The fit and finish of the pen is quite lovely, and very refined.

The Pro Gear (not to be confused with the Pro Gear II) is an interesting shape. It’s a slightly shorter pen, that, nevertheless, still has the girth of a much longer pen. The result is a pen that does tend to look a little short and stubby when compared to other, larger pens. This makes the pen a perfect candidate to sit in a shirt pocket comfortably, but can result in a writing experience a little less than ideal if you’ve got large hands. The girth of the pen is comfortable in a larger hand, but the length would tend not to work with those same larger hands. This is, in essence, a pen that almost requires posting.  Fortunately, the pen posts nicely, and the result is a well-balanced pen that feels quite nice in the hand.

The pen is a cartridge/converter pen, and utilizes Sailor’s proprietary converts/cartridge system. The wider opening of the converter reminds me a bit of Pilot’s converters, but in my limited use of the pen, I didn’t find any of the ink flow issues I have experienced with some of Pilot’s converters in the past.

On this particular pen, Rob opted for the “Zoom” nib, a grind that is fairly unusual.  Sailor does seem to have a whole lot of speciality nib grinds available as factory options that you don’t often find from other manufacturers. The zoom is a nib that will write with a wider line the closer the pen is to horizontal, and with a finer nib the closer the pen is to vertical. It can also be used in a perfectly vertical position, and is ground to handle smooth upside-down writing as well. It’s an interesting grind, and one that I probably never would have tried on my own. It’s also a nib that, after having used, is fun for playing around with, but one that I would not use for daily writing.

Holding the pen in my normal writing position, I get a medium-broad line (especially for a Japanese pen.) The pen’s wetness, which may have been adjusted prior to sending it my way, ran on the wet side of medium. I had no issues with hard starts or skipping. The pen could lay down a line with absolutely no pressure being applied to the nib, which is exactly what one wants, and is the sign of a beautiful adjustment. However, the grind of the nib (close-up below) results in a writing experience that isn’t the smoothest in the world. It wasn’t bad, but certainly not of the level of smoothness you might expect for a round nib. It’s like a stub: smooth enough, but not as smooth as a round grind. 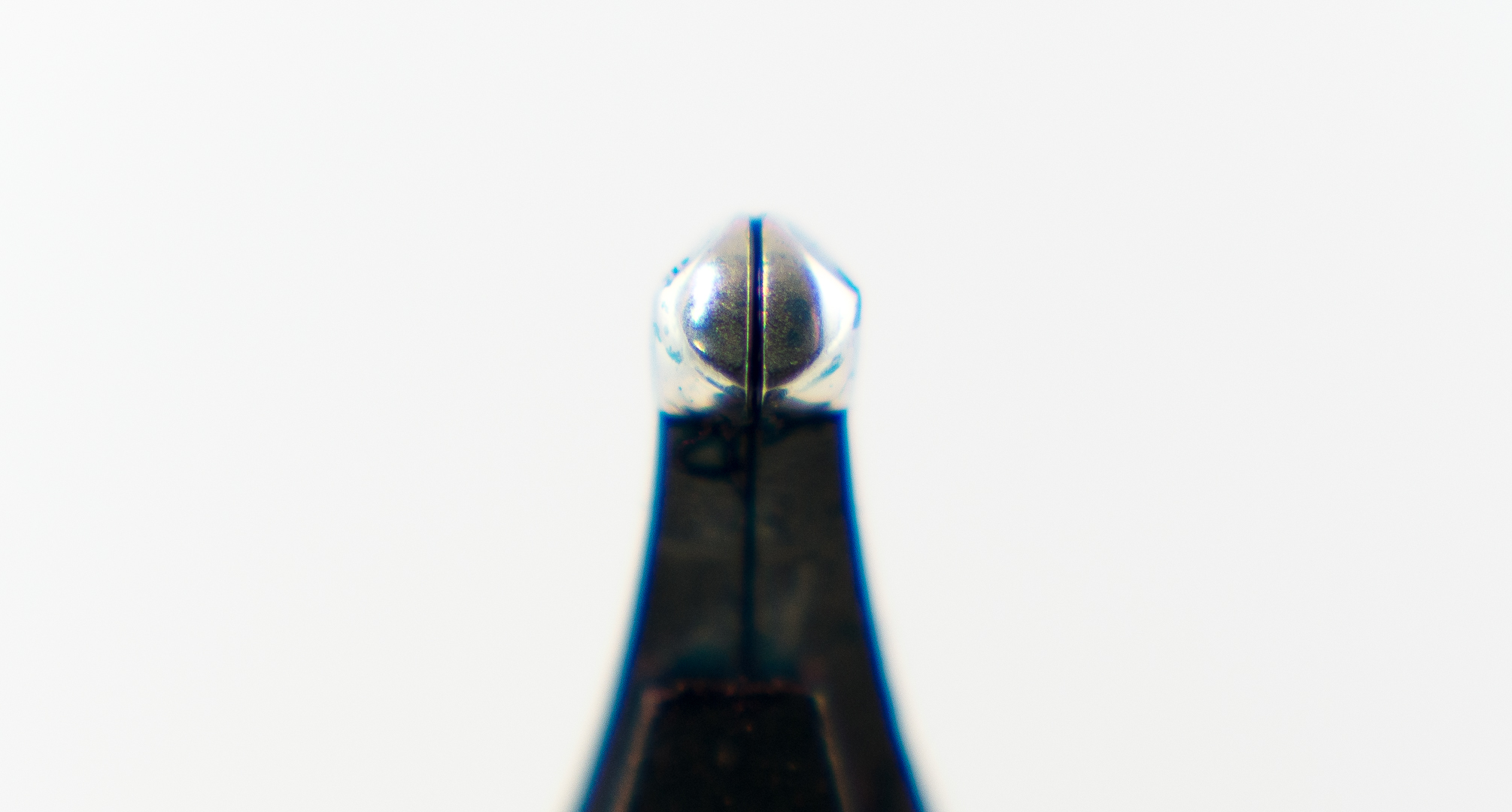 Also of note is that this nib, like most of Sailor’s nibs, comes in 21k gold, rather than the more common 14k or 18k gold. The nib has a fair bit of springiness in it, but the variability of the grind makes pushing that both unnecessary and a little less effective than would a standard fine point.

The Sailor Professional Gear is, as the name would imply, a pen that would be great to use in a professional setting, where you don’t necessarily want to draw attention to your pen. It is in keeping with the Japanese aesthetic for work-a-day pens. While I can appreciate the understated and refined quality of the pen, though, I have a hard time getting very excited about its looks. I love pens that draw the eye, and work in an environment where such attentions aren’t really a problem. And, to be fair, I have a hard time differentiating this black Japanese pen with flat ends from the host of other Japanese pens with flat end–at least in terms of looks.

In terms of writing performance, I have to say that I think this Sailor is the best-writing Japanese pen out of the box that I have used thus far. It is certainly a better writer than the dud of a Pilot Falcon I had (which I realize is not indicative of the brand as a whole–I was just unlucky), and a slightly better/smoother writer than my Platinum 3776 Century.  The build quality is top-notch, and the design is simple and understated. It’s not the kind of pen that really turns my crank from a design perspective, but it’s a well-built, beautiful pen that writes well: what more could you ask?