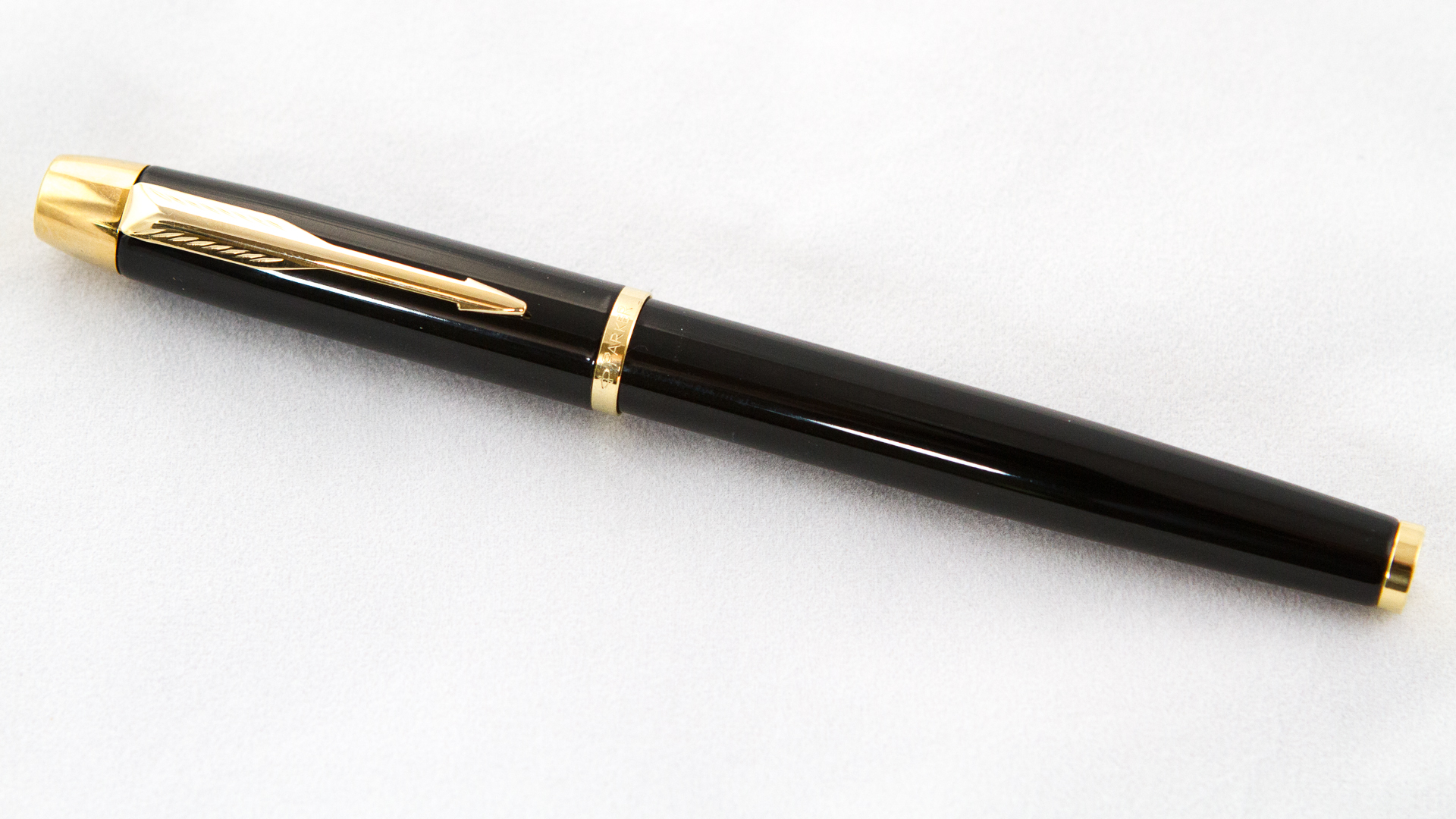 If you’re a pen person, you’ve probably had an experience where you’ve gotten a pen (either self-purchased or as a gift) and, despite your best attempts, you just couldn’t connect with that pen. For someone who doesn’t use fountain pens, that probably sounds ludicrous. (It’s just a pen, for crying out loud!) But we pen people know: sometimes there is a connection, and sometimes there isn’t–even if there is no definable reason for that lack of connection.

Such is the case with the Parker IM for me.

The Parker IM is one of Parker’s lower-end offerings. This metal-bodied pen does come in a few different editions and colors, but I opted for the least-expensive of the lot, the $25 standard black and gold model from Amazon.com. The pen feels fairly sturdy in the hand, but without being too heavy. The black portions of the barrel are painted/lacquered, with all of the accents plated in a yellow gold color.

The design of the pen is…well…it’s boring. It’s just a boring pen to look it. And not boring in the classical-but-timeless way. More like 1970s bad fashion boring. The pen looks like the cheapish sort of ballpoint a shady 1980s real estate company might have printed up at VistaPrint to give to people after signing the mortgage on their new home. It just has a dated, plain look to it that doesn’t speak to me in any way.

Once you remove the click-on cap, which does close pretty securely, you’re presented with a brushed metal section in gold color, and a minuscule steel-colored nib. Here’s where my distaste for the pen really starts to ramp up. The section, which tapers shortly toward the nib, does have a nice texture that helps to alleviate issues with sweaty hands. Despite that, it doesn’t feel very ergonomic to me. I tried writing a couple of letters with this pen, and my hand would start to cramp up within half a page or so.

The piece of design that I just can’t get behind on this pen, though, is the Parker IM’s nib. It’s very small, and quite unattractive. It was as though they were designing a hooded or semi-hooded nib, but actually forgot to make the section in such a way that it would hide the nib. It’s more rounded than a tradition nib, and very short. I also have a minor complaint with how all of the metal accents on the pen are gold-colored, while the nib is silver-colored. How hard would it have been to drop the nib in an electro-plating bath to match the rest of the fitting? It seems another indication of Parker’s apparent disinterest in the design of this pen from the outset.

The cap can be posted, and is moderately well balanced even when it is posted. I did find that you had to push the cap on pretty hard to get enough friction to keep it from coming loose during extended writing sessions. I am not sure how that would impact the finish of the pen over time, or even how durable that finish it to start off with.

The pen is a cartridge/converter pen, and uses Parker’s proprietary cartridges and converters. I should note that the pen does not come with a converter. So, if you ever want to use bottled ink, you’ll need to buy a Parker converter, which on GouletPens.com retails for $10. Even if you were to only use this pen with cartridges, cleaning it becomes more difficult without a converter. If you’ve got other Parker pens with converters, though, you should be fine.

Design aside, a pen’s main job is to write, and this pen does write fairly reliably–as in, it lays down ink, and there’s not a lot of skipping or hard starting. That’s about the best I can say for it beyond that. The ink flow was on the dry side of moderate.  On my pen, the nib felt unfinished–as though they had welded the tip on, cut the slit, and packaged the pen, with no polishing at all. It felt very rough on even Rhodia, Clairefontaine, and Tomoe River paper. It was certainly one of the roughest-feeling medium nibs I’ve ever used. It wasn’t scratchy or toothy, but it just didn’t feel polished, and gave a fingernails-on-the-chalkboard sensation when writing. Granted, that’s something that could resolved by the judicious application of MicroMesh, but out of the box, it wasn’t good.

The problem, for me, was not that I wouldn’t have been able to get the nib writing the way I wanted to, but that I felt no desire to put forth the effort to do so. The lilliputian nib, whose design I found distinctly unattractive, was not something I wanted to even bother working on. The pen didn’t feel comfortable in my hand, the design hovered somewhere between lackluster and aggressively boring, and there was no real connection when writing.

So, for me, the Parker IM is a no-go. For less than half the cost, I have found whole hosts of inexpensive Chinese-made pens that outperform this pen in almost every way. For $25, you could buy 2 Pilot Metropolitans. Or for near this price,  a Lamy Safari.  Or something from Nemosine.  I would recommend any of those pens for a first-time fountain pen user before I would recommend the Parker IM.

Have you had a different experience with your IM? Please let me know down in the comments. I’d love to hear how my experience was similar to or different than yours.