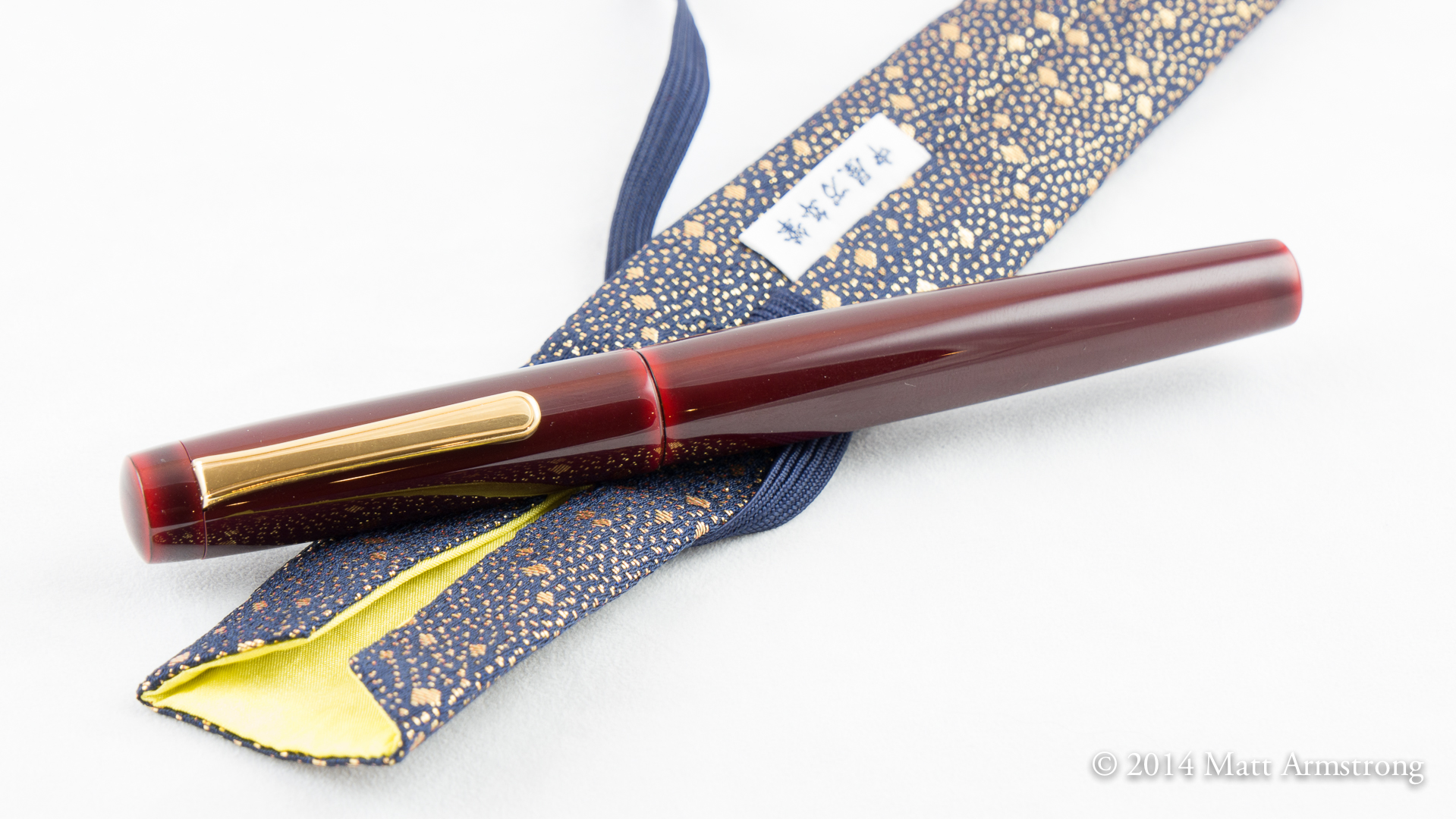 When I decided that my birthday present for this year was going to be a Nakaya pen, I immediately honed in on either the Decapod or the Decapod Twist. I am such a sucker for unique design, and these were unlike any other pen currently on the market. Plus, with all those ridges, the heki-tamenuri finish I was so drawn too would be so much more interesting. In the end, I decided on the Decapod Cigar in the heki-tamenuri (brown-green) finish, and I love it. It’s a beautiful pen.

I’d only had the Decapod in my grubby little hands for about two weeks when a package arrived in my PO Box from fellow fountain pen fanatic, Rob, who has been kind enough to send some of his pens to me for review. Sure enough, when I opened the cardboard shipping container, and peered at the beautifully calligraphed softwood box from Nakaya, I knew I was in for another major treat.

Sure enough, this Nakaya Neo Standard in the aka-tamenuri (reddish-red) finish is a joy to both hold and behold. It’s a stunner of a pen, with a rich, lush finish, and a wonderful nib.

For starters, the Neo Standard is a very good-sized pen. At 135mm long (uncapped), it is long enough that is really doesn’t need to be posted–which is good, as it’s obviously not really designed to be posted. The grip is very comfortable, and tapers between 10 and 12mm, based on where you hold the pen. Despite the pen’s size, though, it’s extremely comfortable in the hand. It is right up there with the feel of the http://penhabit.com/meet-latin-women/, which is probably the most comfortable pen in my collection to hold.

Like the Decapod, the Neo Standard is made from Ebonite. Unlike the Decapod, whose walls feel very thin and delicate, the walls of the Neo Standard are thick and beefy. They feel far more solid and hefty, but still quite refined. It is this extra width to the walls of the barrel that give the pen just the perfect in-between weight: 22g uncapped/unposted. It’s not too light to feel uncontrollable, but not so heavy that it will result in fatigue in use over time.

The aka-Tamenuri finish on this pen is, although I could hardly believe it, even more beautiful than the heki-tamenuri finish. While the contrast of the brown and green lacquers on the heki-tamenuri finish make for a very eye-catching effect, the red-on-red color palette of the aka-tamenuri finish results in a pen that almost looks as though it was glowing, or even alive. The finish is accomplished by several base coats of a light red lacquer being covered with a rich, dark red lacquer, then being polished to the point that the lighter red shines through around the edges. It’s a much richer-looking finish, and this is a pen where I could get lost staring into those polished glassy reds.

This pen is also a cartridge/converter pen, and uses Platinum cartridges and converters. The pen comes with a single converter of high quality and a box of Platinum pigment-based ink cartridges.

Unlike on my Decapod, which had a custom-ground nib, I had the opportunity to try out one of Nakaya’s stock nibs on this pen: broad in this case. Right off the bat, I was a little alarmed at how scratchy it was. Looking at it under a loupe, I was surprised to see that the tines were pretty seriously out of alignment. It was probably the most out of alignment I had ever seen the tines on a pen that cost more than $10. Considering that the retailer who sold the pen usually checks and adjusts the nibs of pens they sell, I suspect the tines may have been knocked out of alignment when the pen was re-capped before sending it out.  (The pen came directly to me from the retailer.)  With permission from Rob, I adjusted the tines back into alignment, and once I did, this pen started writing like an absolute dream. The scratchiness was completely gone, and the pen had only the very slightest amount of feedback. Even for someone like me who generally likes buttery-smooth writers, I found it to be just the perfect amount of feedback.

What makes the writing experience on these Nakayas so wonderful to me, though, is the ink flow. On both of the Nakayas I’ve had the chance to use now, the ink flow has been perfectly calibrated: wet, but not overly so, and generous enough to make for some wonderful shading with the right inks. And I’ve yet to have it choke up on longer writing sessions, which is good, because this is a pen that just screams to be used to write long letters, novels, or screenplays. Not to wax too poetic, but it almost feels like a partner in creative endeavors, rather than just a pen. I would find myself looking for excuses to pick it up and start writing with it several times throughout the day.

In the video above, I mention that, had I to do over again, I’m not sure if I would still choose my Decapod as my first Nakaya experience. I love this Neo Standard. I love the shape, I love the feel and fit in the hand, I love the way it feels when I write. I love the finish. I really love my Decapod, too, but when push comes to shove, I think I may very slightly prefer the Neo Standard. It just feels so perfectly balanced, so properly made, and so alive. It’s a close call.

Just what I need. Another pen to add to the “must-own” list.