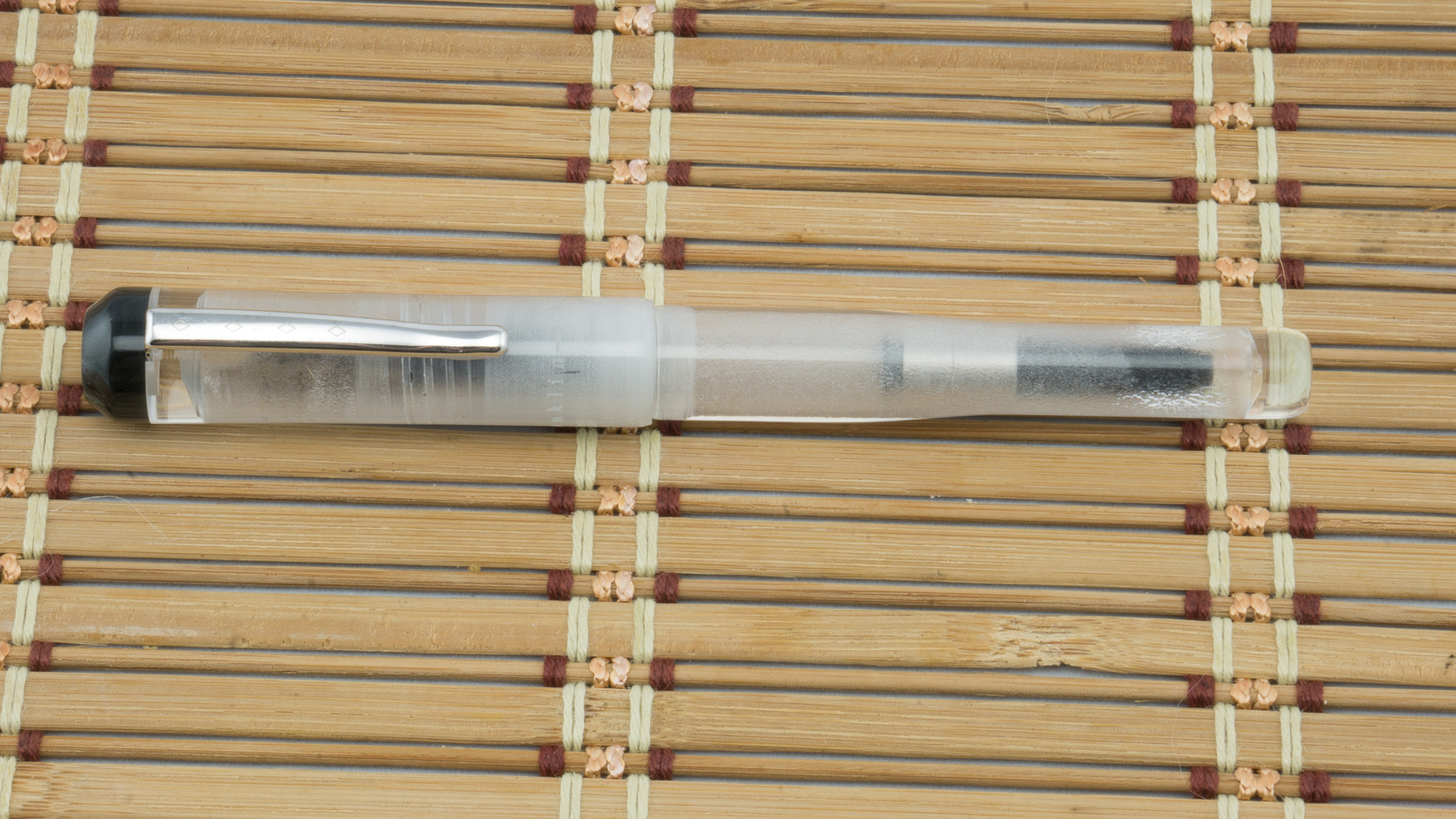 Upon receiving my much-beloved Franklin-Christoph Model 19, there was no doubt in my mind that there would be more Franklin-Christoph pens gracing the grooves of my pen cases. And, sure enough, a few months later, I found myself ordering another F-C, the Model 02 in the Smoke and Ice finish.

The F-C 02 is a beautifully-built pen with a rather unique profile, including a significant taper at the end of the barrel which allows for the pen to post very, very deeply. So deeply, in fact, that the length of the pen when posted is only 3mm longer than the length of the pen when capped. If you’re a writer who really likes to post his or her pen, this is a fun one to write with, because you get to post the pen without making it extremely back-heavy or lengthening it to the point that it becomes unwieldy.

The “ice” acrylic is a clear acrylic that appears to have been acid-etched or treated via some process to pick and frost the inner surfaces of the pen. The exterior is very polished and smooth to the touch, but the pitting internally gives the pen a white, icy feel which is quite unique and very attractive. The finial on the cap is made of a pearlescent charcoal grey acrylic, and provides a lovely counterpoint to the starkness of the ice finish. In retrospect, I think I probably would have preferred to have a “fire & ice” or “emerald & ice” finish. A pop of color would have been a more interesting contrast.

That being said, the fact that this pen can be used as either a converter/cartridge pen or an eyedropper does give me some flexibility to adding my own pop of color to the pen. The semi-transparent nature of the barrel means that, when used as an eyedropper, the color of the ink really shines through, and the extra surface area caused by the internal treatment of the acrylic gives the ink a lot of nooks and crannies to spread out and catch the light. For instance, in this photo, the pen was inked with Franklin-Christoph Deep Purple writing fluid, which almost sparkles through the barrel.

dating multiple people at once

Another feature which I consider to be nothing short of brilliant is Franklin-Christoph’s decision to place the block threads which hold the cap onto the barrel not above the section, but right next to the nib. The result is that there is no place on the pen where your fingers would rest directly on the threads. There are variations of grip width based on where you position your fingers, but there are no sharp step-downs, no threads, no annoying seams. It’s really quite a magnificent design, and one that I hope other acrylic pen manufacturers will consider using the future (assuming, of course, that F-C hasn’t patented that method of cap closure.)

The pen is quite comfortable to hold in the hand, although the section is just a touch wider than I generally prefer. I will say that this is one of the few pens where I actually prefer the feeling of the pen posted. The extreme taper toward the back of the pen causes the pen to feel a little out of alignment when held in my grip, but placing the very wide cap on the back takes care of that nicely. I have had a couple of instances of the cap coming un-posted during the course of my writing, but that usually happens when my hands have started getting sweaty, or when I start writing using my fingers for motion rather than my whole arm. It’s a minor issue, and one that I often see on posted pens, so it doesn’t bother me at all.

As was the case with the F-C 19, the 02’s nib is pretty great. I opted for the steel nib this time around rather than the 18k nib that I purchased with the Model 19. I also went with a stock medium rather than the Masuyama-ground medium italic from my 19. I have used the F-C nibs in several other pens, as they come in the standard #5 and #6 sizes, and without exception, they have been wonderful nibs. The nib on the 02 Intrinsic has just a bit more feedback than the other F-C nibs I’ve used, but not so much that I dislike the feel of it. There’s no scratch or even tooth, but the polish on the surface feels a bit more like they wanted to find a nice middle ground between people like me who like super-smooth nibs, and people who like their nibs to give a bit of feedback. It’s not enough to be distracting, but just enough to know you’re writing. Ink flow is slightly drier than I like, and I will probably adjust it slightly once I’ve emptied out the converter currently in the pen.

As I mention in my video, I really like this pen. I think the design is unique and interesting, I think the quality of construction is superb, and I think that the nibs on these F-C pens are some of the best being put on modern pens today. And the ice portion of the smoke & ice finish means that this pen will probably never see another converter or cartridge for as long as I own it. This is a pen that just screams to be used as an eyedropper. I consider this Franklin-Christoph to be an exceptionally strong entry in the Franklin-Christoph lineup, and a pen that I’m sure will get plenty of use in my collection over the years.

8/15/2015 Followup: I was asked by several folks about the section on my 02 Intrinsic, which is the same “ice” material as the barrel and most of the cap. The F-C website show the pen, and most customers have received the pen, with a “smoke” section. I reached out to F-C, and Scott Franklin got back to me quickly about the situation. The 02s with the Ice section were part of a small batch of 6 (or so) that the manufacturing facility had built outside of the standard design. It was simply a fluke that I ended up with one of these. The standard design has been, and will continue to be with a section that is made in the “smoke” finish. (A lucky fluke, IMO).