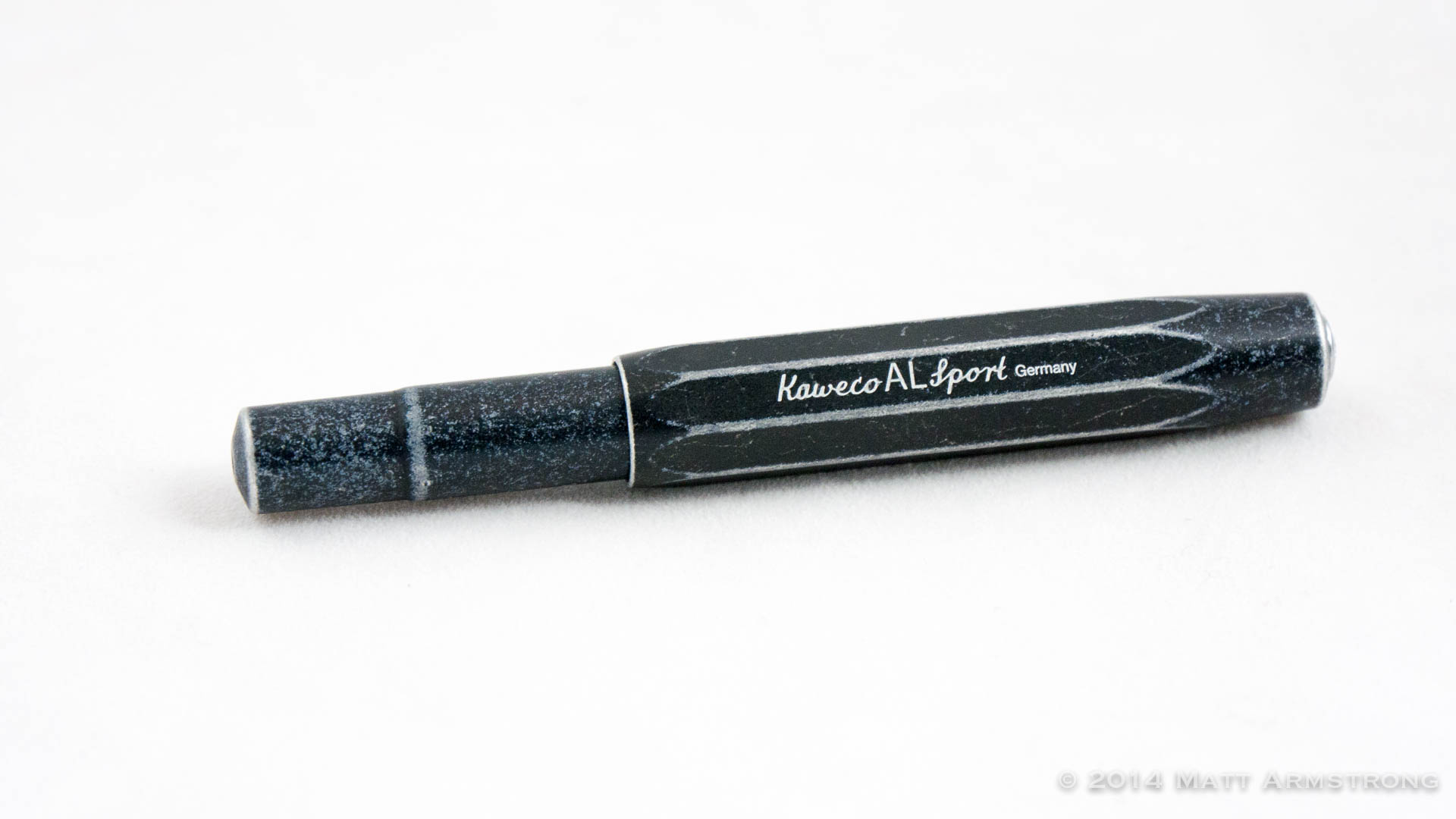 Over the last year, I’ve seen a lot of hoopla about the Kaweco AL-Sport Stonewash. Lots of reviews, most quite positive. And, throughout it all, I remained skeptical. As someone who lives shiny, polished pens made out of lovely, unique materials, the idea of a pre-distressed metal pen–and a small one at that–did little to grab my interest. 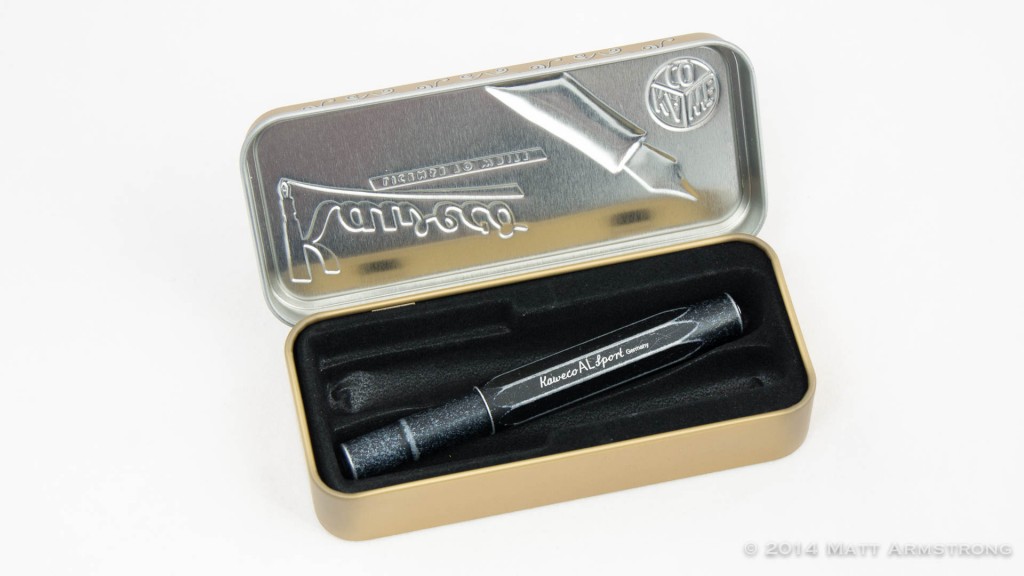 So, when Kaweco loaned me an AL-Sport for review, I approached the pen with more than a little bit of skepticism.  The pen, which is a very short 105mm in length when capped, is truly a pocket pen. But, unlike most pocket pens, Kaweco has opted to maintain a very usable section girth rather than make the pen super-skinny at the same time. (In comparison to a Waterman 52 1/2v or my new Merlin 33, for instance.)

Made out of aluminum, this pen feels rock solid. It’s robust and substantial without being heavy.  And when, posted, it’s actually quite comfortable in the hands. As I generally like to hold my pens a little higher up the barrel, I found my grip regularly landing right on the threads of the section, but they were well-cut and well-polished, and I never found them to be sharp or uncomfortable. And despite the pen having a metal body, the weight continued to be light enough that I could use the pen comfortable for long writing sessions with no issue.

When it comes to pen materials, I generally prefer the plastics (acrylic, celluloid, casein, resin, etc.) to metal. Many metal pens become slippery in my hands, or attract fingerprints like a Sherlock Holmes crime scene. Aluminum, however, really feels like the best material to use for a metal pen like this. It remains slightly textured, and feels almost absorptive, so I never experienced the slickness of grip I find with most metal pens.

But the real star of the show on this iteration of the AL-Sport is the unique stonewash finish. Kaweco has taken what appears to be a sort of anodized finish, and run it through pile of polishing stones. The pen does look pretty darn beat up. But, the unique lines of the Sport series really do tent to lend themselves to this sort of abuse. In a lot of ways, it reminds me of a slightly lower-rent version of the polishing that Nakaya does on their lacquered Decapods, where all of the high points of the pen are distressed away to display the raw aluminum underneath. It’s actually quite a pleasing effect.

(I do have to mention that I’m grateful that Kaweco loaned me the black version of this pen…from the pictures I’ve seen online, I believe that I would find the black finish on this pen more attractive than the blue finish).

As for the nib, Kaweco uses the same steel nibs that are used across many of their pens, and which can be swapped out easily.  (The utilize a screw-in nib and feed unit with a plastic collar.)  The nib on this particular pen was a fine, and I found that it wrote slightly finer than I was expecting for it being a German-made pen.  It also ran a bit on the dry side. If the pen had been mine to keep, I would have worked on increasing the ink flow slightly.

Despite the slightly dry ink flow and the narrower-than-expected line, I was shocked at how smoothly the pen wrote. I have to admit no small amount of prejudice against many of the Kaweco pens that I see sold here in the U.S., because of their size. They have always felt a bit more like toy pens to me than fine writing instruments, which is why I had never purchased one. But this was one of the most well-polished nibs I had ever had the opportunity to use. It was extremely smooth, but exhibited none of the traits of the dreaded “baby’s bottom” over-polishing. I actually found the smoothness to be even more remarkable considering that the nib was drier than I generally like. It was quite a lovely surprise.

There are really only two things about the pen I consider to be negatives. First, the pen doesn’t come with a clip. You can buy accessory clips for the pen, but they appear a bit on the flimsy side to me, and don’t look all that thoroughly integrated with the pen since you just slip them over the end.  The other issue, and one that is nearly a deal-breaker for me, is that the pen isn’t long enough to take a standard international converter. It’s really only meant to be used with the short SI cartridges. I don’t use carts. I don’t really care for them. It’s my understanding that you can find mini-converters that will fit in the pen. And, of course, you can always refill carts with the ink of your choice, but I do prefer the ability to use a full-sized converter in my pens.

In the end, I really enjoyed this pen. Enough that I suspect I will probably add one to my collection. I find that I do like the stonewashed finish, and feel like this would be a great pen to throw in a college backpack or a purse, and not worry about it getting beaten up. And, if Kaweco ever decides to make an extended version of this pen that can take full-sized converters, and comes with a clip built in, I’ll be first on the pre-order list.