Matt Posted on March 1, 2015 Posted in Pens, Review No Comments 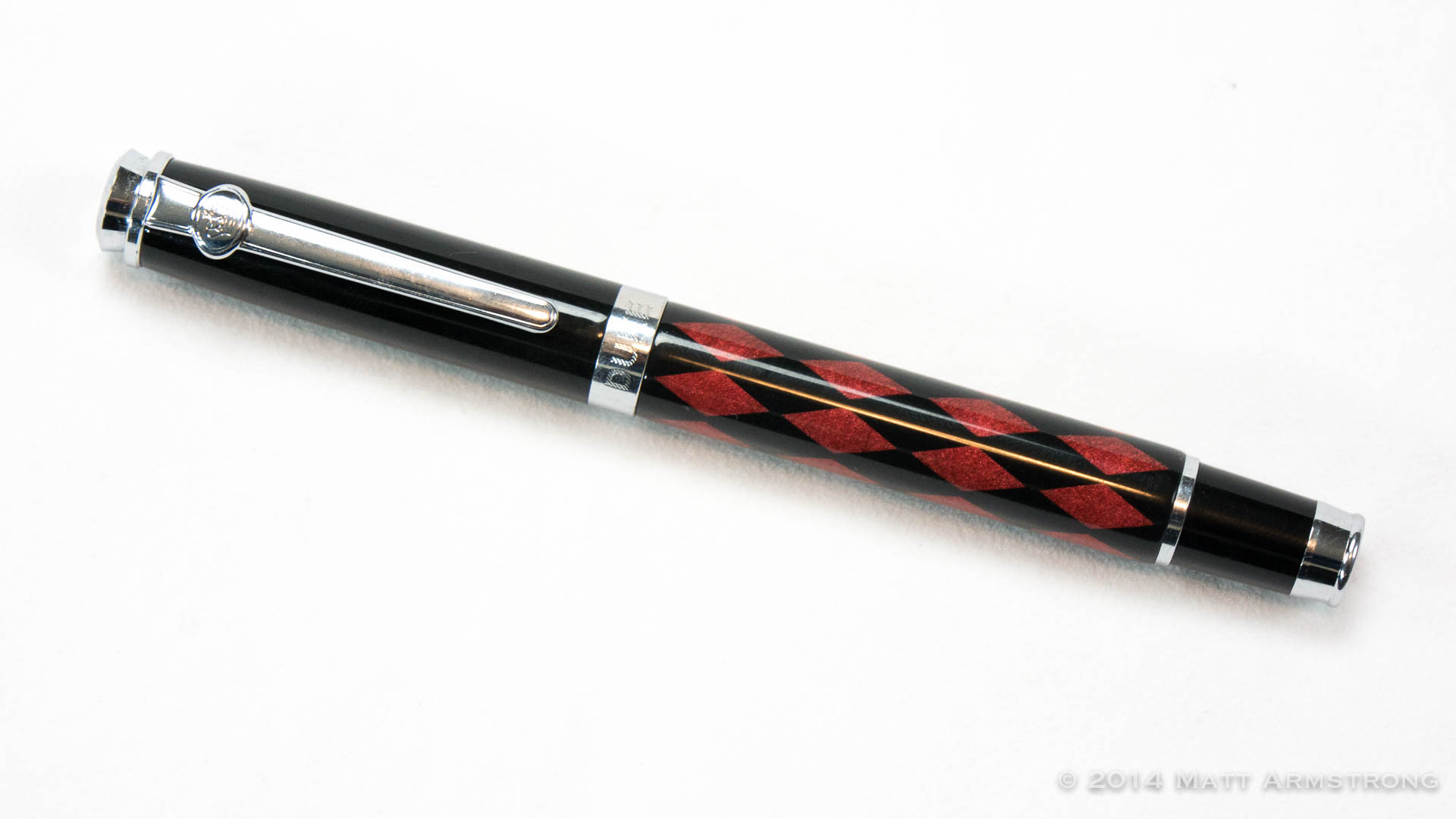 The Duke D145 is commonly known on eBay, where this pen came from, as the “Rhombus Pattern.”  Of the inexpensive, Chinese-made pens I have used, this pen is one of the more stylistically interesting. The red and black harlequin pattern on the barrel is quite eye-catching, especially as the red/maroon color has some depth and sparkle that you wouldn’t necessarily expect from a pen in this price range.  It looks interesting while still being refined. 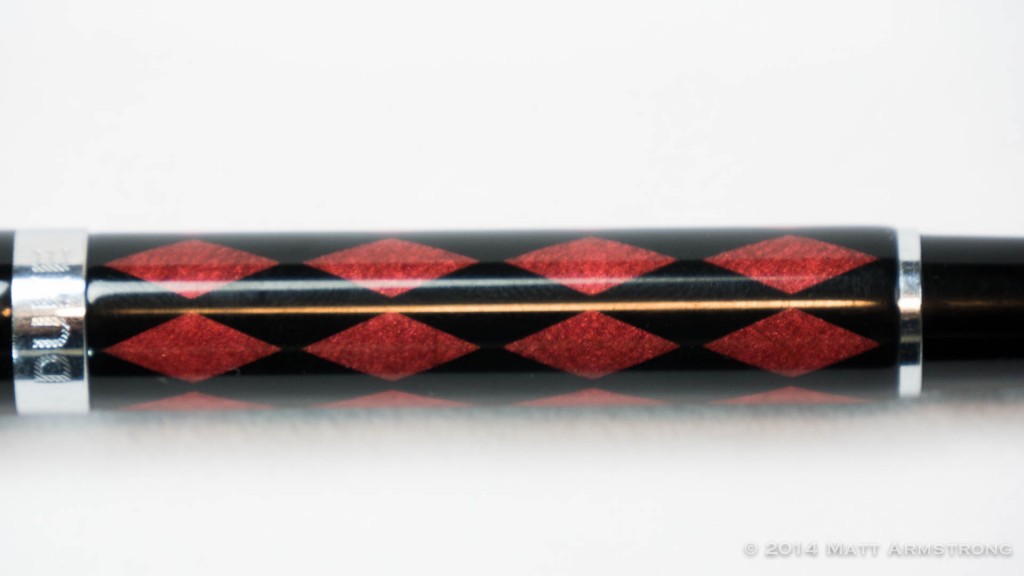 The pen is metal-bodied. The cap, which is reminiscent of the caps found on the Pelikan M-series pens, is nice and heavy, and clicks onto the pen solidly. While the pen does close with a nice, hefty clunk, the cap does rotate loosely around the barrel of the pen, making it feel a little slack. I’ve never had any issues with the cap coming off, but that looseness in the rotation does feel cheap. The clip is solid, with just a touch of give to it.

The section, which is plastic, is fairly comfortable to hold. I generally prefer a section with a slightly concave profile, while this section has more of a taper. And the smooth section can get just a touch slippery if you’re a hand-sweater. The pen can use standard international cartridges in both long and short varieties, as well as a standard international converter. I will mention that the converter that came with this pen was of very poor quality, and it fell apart the first time I tried to clean out the pen. I simply replaced it with a converter I had laying around, and that seemed to work just fine.

The pen can be posted, and is actually designed to allow the cap to click onto place at the end of the barrel, rather than simply being held on by friction. It’s a very secure posting, but it makes the pen a little to long for my tastes. Also, as a metal-bodied pen, posting the cap takes it up to a higher-than-average 38g. It’s not too heavy, but if you like a lighter pen, you may want to use this pen un-posted. 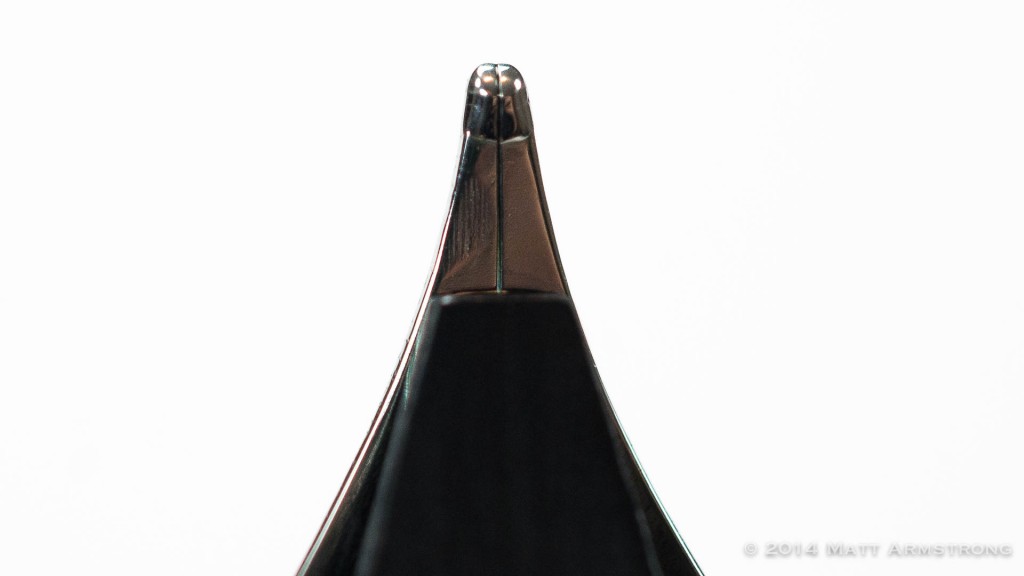 The steel nib on this Duke pen is surprisingly good considering the cost of the pen. It does tends to run a little on the dry side.  Despite the somewhat stingy ink flow, I found the nib to be extremely smooth, with no real hint of a baby’s bottom problem. You can see from the image above that the tines tend to be just a little too tight, and a simple flossing of the tines would probably open up the ink flow on this pen nicely. It appears to be a #6-sized nib, so it may also be possible to swap it out with other nibs.

For a sub-$10 pen, I’ve been relatively impressed with this one. Its design is pleasing, its nib is smooth, and it’s comfortable to hold.  This would be a pen I would be happy to give to someone just starting out in the fountain pen hobby.

UPDATE: After this video went live on YouTube, I received an interesting comment from Juan.  He writes: “Duke is probably one of the strangest pen manufacturer brand in the world, and this is because as the brand is Chinese, their models are mainly made in Germany (not only the nib… but the body and other parts, too) and that is the reason for the “made in Germany” that appears in all the Duke pens. And the other characteristic of this brand is that they make probably the cheapest pens in the chinese world of the writing instruments, but at the same time, the brand make the most expensive, exclusive, and top hi-end fountain pens of China. In the expensive pens, they use 14k and 18k nibs that are really superlative. You can see this different type of products if you go to EBay or an specific pen store and you’re going to see very cheap pens and, at the same time, very expensive pens (sometimes hundreds of dollars) of this brand. I’ve got a pair of Duke Limited Edition pens and I can say that are really fantastic ! Can’t be compared with the cheap ones… Other strange curiosity ? The gold nibs are produced în China ! (Not in Germany !!).”

I didn’t take the time to verify Juan’s comment (because I’m a lazy, lazy man), but if so, that’s very interesting…particularly regarding their high-end nibs being made in China. I may have to see if I can get my hands on one of the higher-end Duke pens to do a comparison.