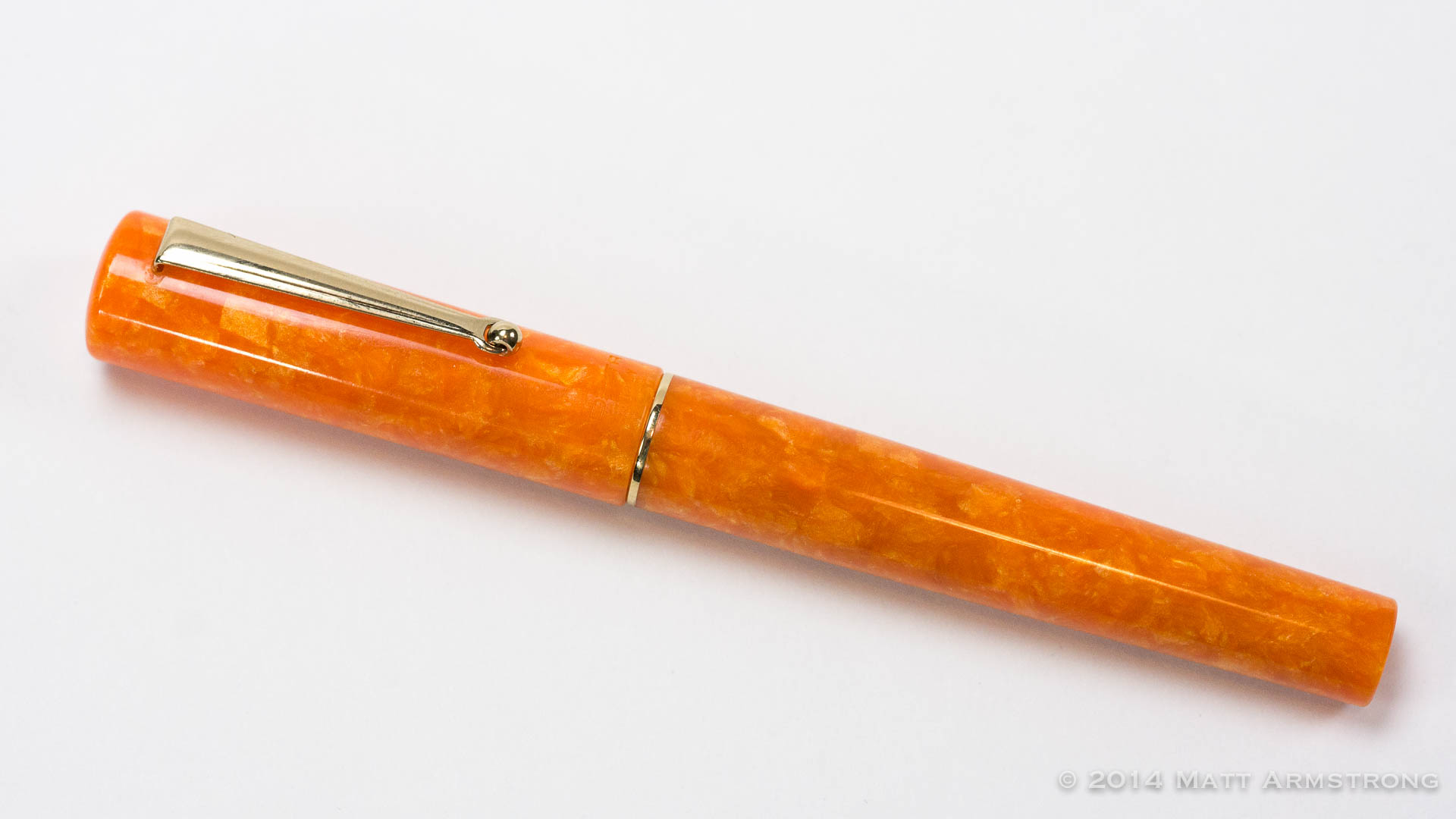 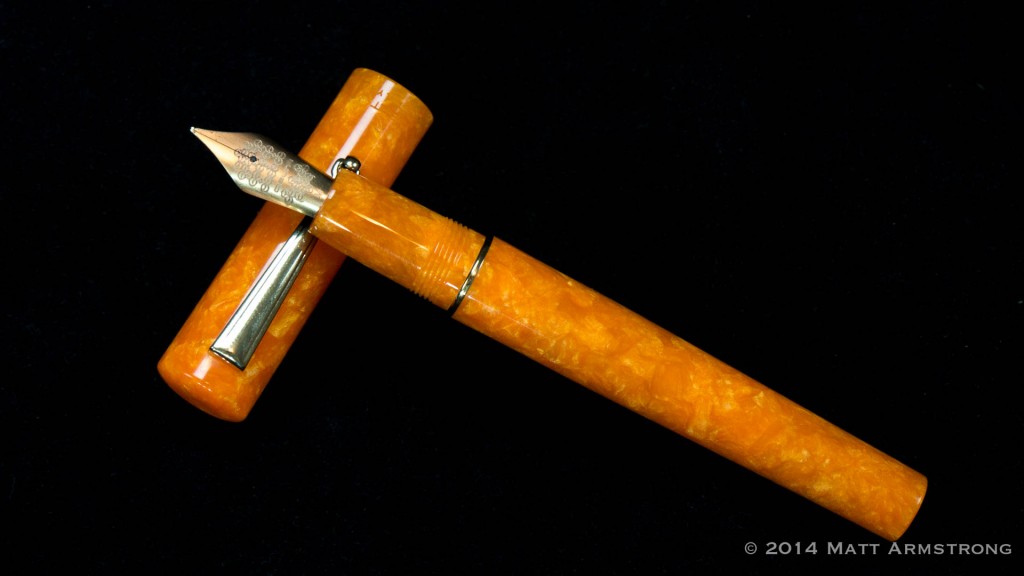 Late in 2014, The Goulet Pen Company posted about a new, exclusive version of the Delta Unica that they were going to be adding to their catalog. This new exclusive was built using the same orange celluloid material that Delta uses on many of its higher-end pens (like the Delta Dolce Vita). There was much falderal around this, as an $80 modern pen made out of celluloid was something many (myself included) had never seen before. Plus, it was in a very eye-catching color.

I suspect that Delta hadn’t anticipated the volume of pens like this that Goulet Pen Company would move because, only a few days after I placed my order, Brian Goulet announced that the Delta Unica in Orange Celluloid was coming to an end. Delta was going to be unable to make any more out of the orange celluloid, as the material itself can take up to two years to make.  As a result, my Goulet Exclusive also became a limited edition.

Despite the fact that my version of the Delta Unica is no longer available, I still wanted to do a review. The Unica still is available in blue, pink, and white acrylic with silver appointments. There is also a new Goulet Exclusive in blue acrylic with a matte gold nib (more on that matte gold nib later.) 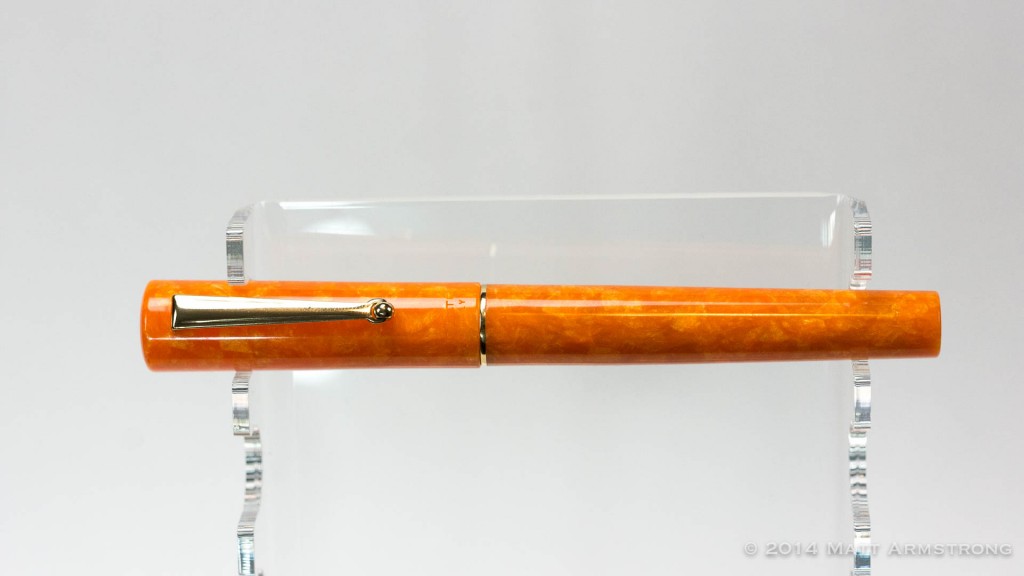 The Unica is one of Delta’s less-expensive pens.  It has an almost conical shape, with a flat end at the bottom of the pen, and straight-lined flare to the cap’s slightly rounded flat top. My version of the pen came with gold-colored appointments.  The clip is sturdy and fairly stiff, and has a little roller-wheel for the ball of the clip. The pen is fairly thick for its size, giving it a slightly stubby appearance, with a grip of nearly 12mm. So, while it’s not the longest pen in the world, it’s probably going to be a better fit for people who like fuller grips.

The Unica is a cartridge/converter pen, but the threads of the section are metal, so it can’t be used as an eyedropper. (Personally, I would never use this particular pen as an eyedropper, as celluloid is far too delicate a material for eyedropper purposes.) The pen utilizes standard international converters and cartridges.

In the hand, this pen is quite comfortable, if a little on the wide side. It’s just long enough for me use without posting, but feels more comfortable and balanced when posted. It posts deeply, so it doesn’t feel off-balance or unwieldy when posted. The section is smooth, and tapers slightly. The threads aren’t sharp, so even if you grip the pen a little higher up like I do, they shouldn’t be much of a bother to you.

I did find myself slightly annoyed at the staining I noticed on the inside of the section’s celluloid from the inking process. I inked with a dark blue initially, and as a result, the celluloid of the section now feels and looks slightly darker. This is why I wouldn’t use this pen as an eyedropper, even if the section threads weren’t metal. I suspect the darkening of the material I experienced probably would not happen on the acrylic versions of this pen.

And the nib?  Well. Let me tell you. The nib on the Unica is one of the smoothest, juiciest steel nibs I have ever used in my entire life. I didn’t have any skips or hard starts. There is essentially no feedback. It’s very well-polished. I might have even considered it ever-s0-slightly over-polished had I experienced any issues consistent with Baby’s Bottom Syndrome. The nib is so wet, however, that the Medium writes like a European broad; I would hard pressed to describe this pen’s line as medium even in  the most generous of circumstances.

Perhaps one of the most unusual aspects of my version of this pen is the “brushed metal” finish on the gold-colored steel nib. The nib is quite intricately decorated, but the decorations come off a little chunky and cluttered to me, instead of refined. The matte gold/brushed metal finish on the nib looked really cool when I first got the pen.  It’s a neat idea, but execution leaves a little to be desired. First, it doesn’t really match the shiny gold appointments on the outside of the pen. And, during the first cleaning, I noticed that the face of the nib wouldn’t come clean. Upon closer inspection, I realized that the matte finish on the face of the nib had already started off leaving a big, rough, stained patch between the tip of the nib and the start of the embossing. It’s gotten worse over time and now it looks pretty bad. The nib has even started leaving little flecks of gold on the page when I write. I’m pretty seriously considering trying to figure out if I can buff off the matte finish and polish the nib face to a mirror shine. If you don’t care about the aesthetics of your nib, it doesn’t impact the writing experience at all which, on my pen, is pretty glorious. If the nib’s aesthetics are important to you, I would encourage you to steer clear of the matte-finish nibs. It just isn’t a great look after the first inking or two.

Ever since people found out that I snagged one of the last orange celluloid versions of the Unica, they’ve been asking me if I’m interested in selling. I’m happy to go on the record: no, I’m not selling the pen. In the last few months since receiving the pen, it has regularly found a rotation with many of my far more expensive writing instruments. The Unica is a pen that punches well above its weight class. For $75-$80, you’re going to be getting a well-made, turned pen with an excellent steel nib. Even the acrylic versions are a steal at this price. (The celluloid version…well that was the deal of the century, in my opinion.)

The Unica would be a great stepping stone for someone interesting in moving up from the entry level Pilot Metropolitans and Lamy Safaris, but isn’t quite ready to breach that $100 price point. If your experience with the Unica is anything like mine, you’ll find it keeping quite solid company with pens that cost significantly more.