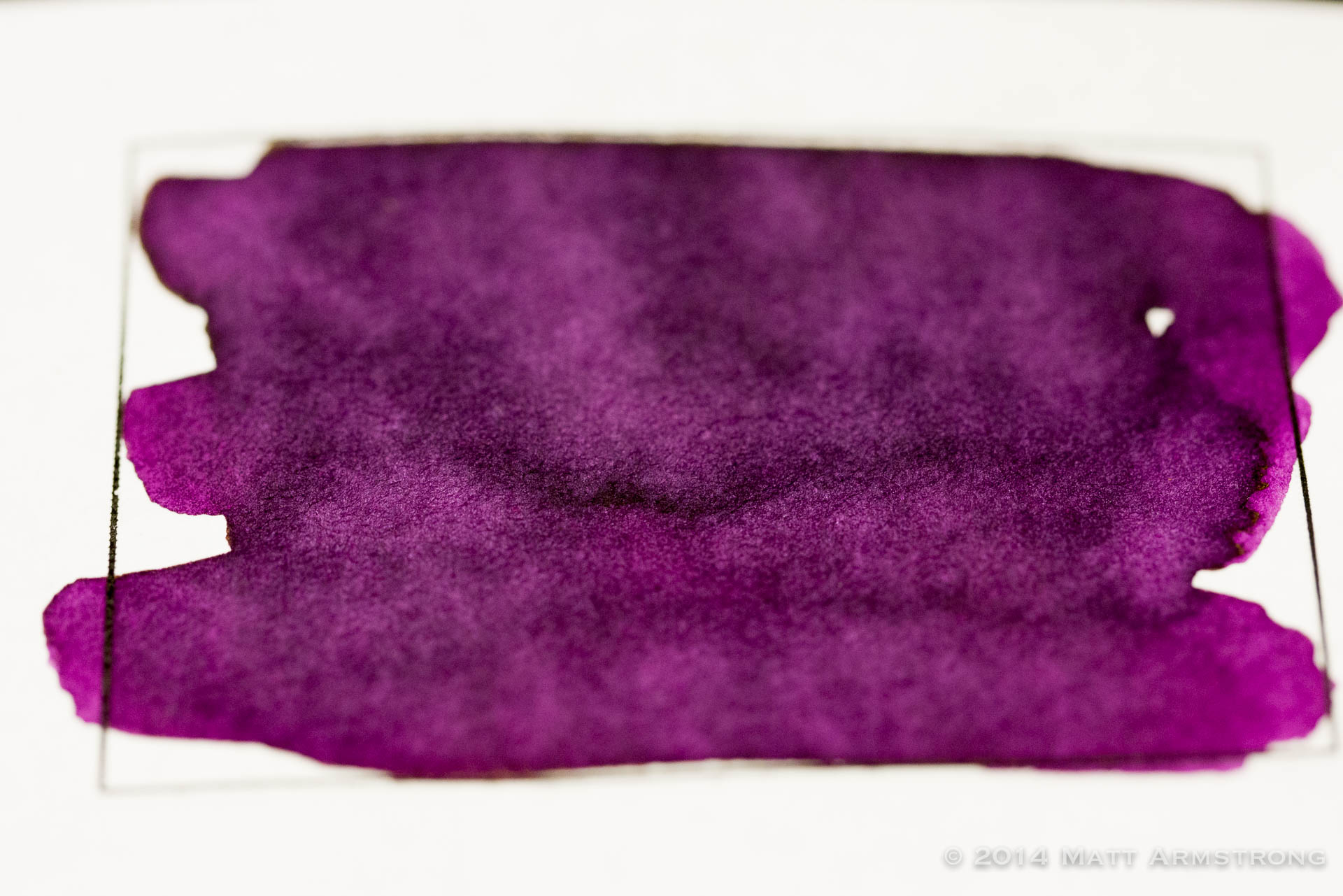 If I had to pick a favorite color family of fountain pen inks, greens would be first, followed closely by purples. I love my purple inks. Despite purple’s rank in my ink hierarchy, however, I find myself largely disappointed with many of the purple ink options that are available to me. My favorite purple, up until recently, has been the lovely De Atramentis Aubergine, which I have used significantly more than any other. But most of the other purple inks I have used have been too red, too blue, too “dusty,” to unsaturated, or too boring. 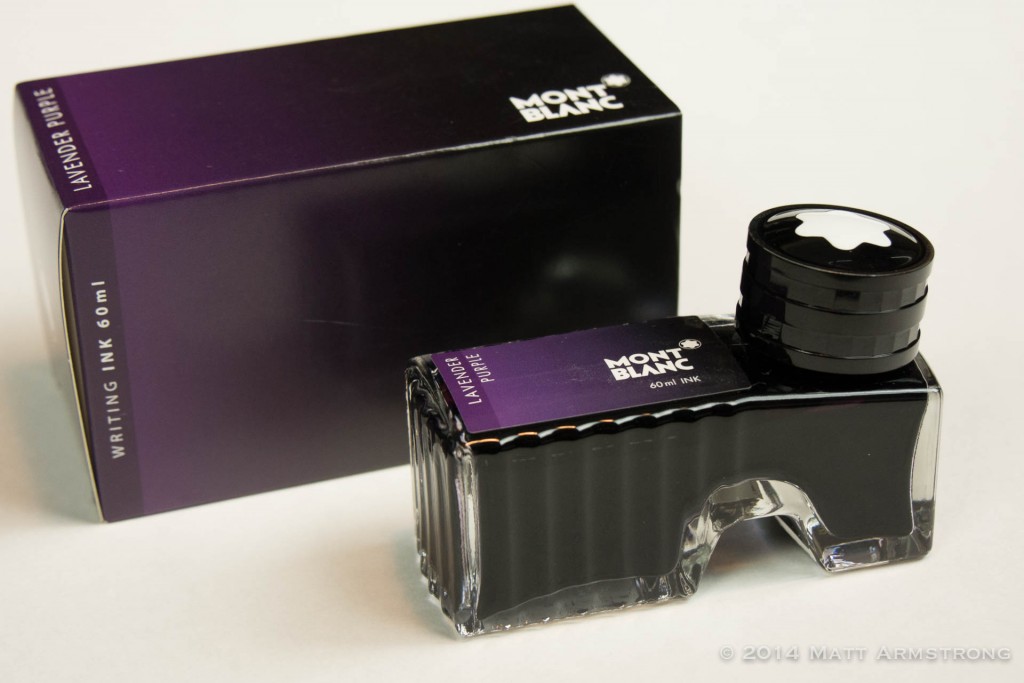 Prior to 2015, the one purple ink that had always intrigued me, but that I never tried, was Montblanc Lavender Purple. When I joined the fountain pen hobby in early 2013, Lavender Purple was out of stock everywhere, and nobody really seemed to know why. It remained on most retailers’ websites, but always out of stock. I looked in vain for a retailer that still had some, but was met with disappointment over and over again.

Montblanc Lavender Purple is a rich, saturated purple, that I have repeatedly described as the exact color of blueberry pie filling. Despite gold coast single women, pie is clearly, quantifiably, and vastly superior to cake in every possible way. And of all pies, blueberry is my favorite. I’ve never been particularly tempted to taste my ink, but this one?  The looks of this ink, wet on the paper has almost left me with a purple tongue on more than one occassion.

Lavender purple is a deep, rich hue that goes on smoothly, and with a nice flow. If you’re a regular user of most Montblanc inks, you’ll understand what I mean when I say that it just writes the way a fountain pen ink is supposed to. They really seem to have gotten it right on this one. On the right paper, it can almost have the look of crushed purple velvet, with a lot of motion and depth. It’s a stunningly beautiful ink.

On the premium papers, this ink performs very nicely. There was no bleedthrough or noticeable feathering. The color remained rich and saturated. There wasn’t a ton of shading, but there was some. And I didn’t notice this initially (thus the low scores above), but on particularly wet pooling, there can even be hints of gold sheen.

While I like the way this ink looks on Rhodia paper, it doesn’t really hit the peak of its performance until you put it on some cream-colored Tomoe River paper. As this is a warmer purple (as opposed to a more blue-based violet), it likes the warmth of cream-colored paper over harsh, bright white.

On the down side, this ink has a fairly long dry time on the premium papers. There is also, essentially, no water-fastness to speak of. If you breath heavily on this paper, you might wash away the color.

Funnily enough, on cheap copy paper, the properties of this ink are almost exactly opposite of what they are on premium papers: 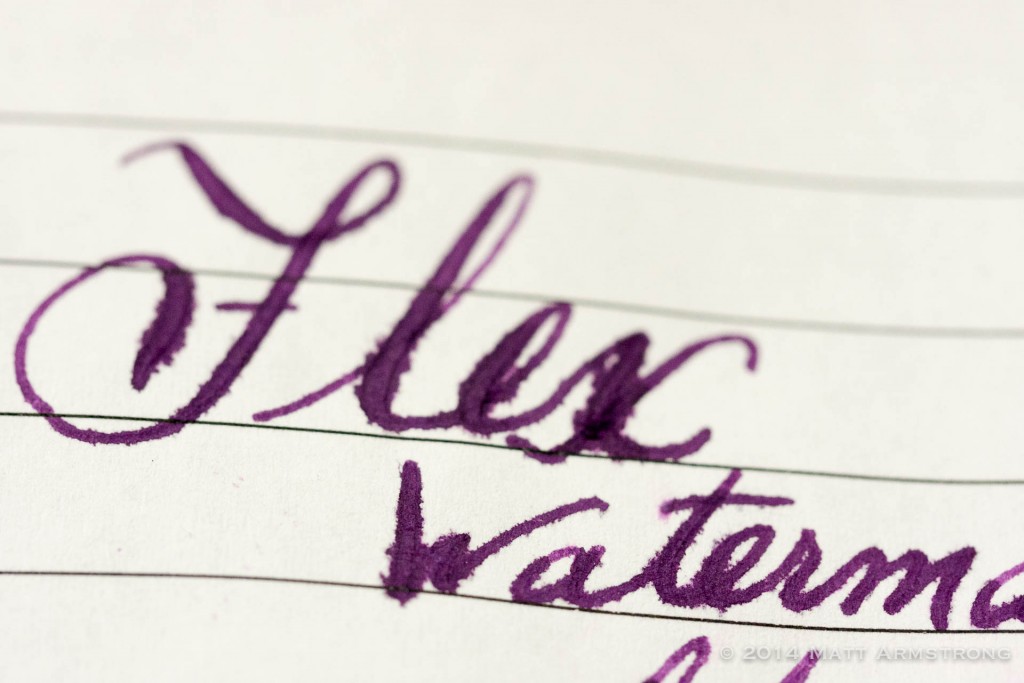 Using Staples 75gsm copy paper, this ink developer more a blue undertone. It has amazing dry times (sub 2-second). It’s almost completely waterproof. It has no shading, no sheen, it feathers like crazy, and bleeds like crazy. Usually at least some of the characteristics of an ink are preserved on cheap paper, but it is almost as if Montblanc Lavender Purple is a completely different ink if you don’t use it on paper treated to be fountain-pen friendly. (Suffice it to say, I kinda hated this ink on the Staples paper.)

Across the board, I found this ink quite easy to clean out of every pen into which I put it. This isn’t particularly surprising, considering it’s lack of waterproof characteristics, but I think this is an ink you could put in a clear demonstrator without having to worry about the possibility of staining your pen.

I still really like De Atramentis Aubergine, but it tends to run very wet consistent with many other De Atramentis inks I’ve tried. Montblanc Lavender Purple is very similar in color, but it is so incredibly well behaved on most of the papers that I use on a daily basis. Plus, you know, blueberry pie filling. It has taken over the #1 spot in my list of favorite purple inks.