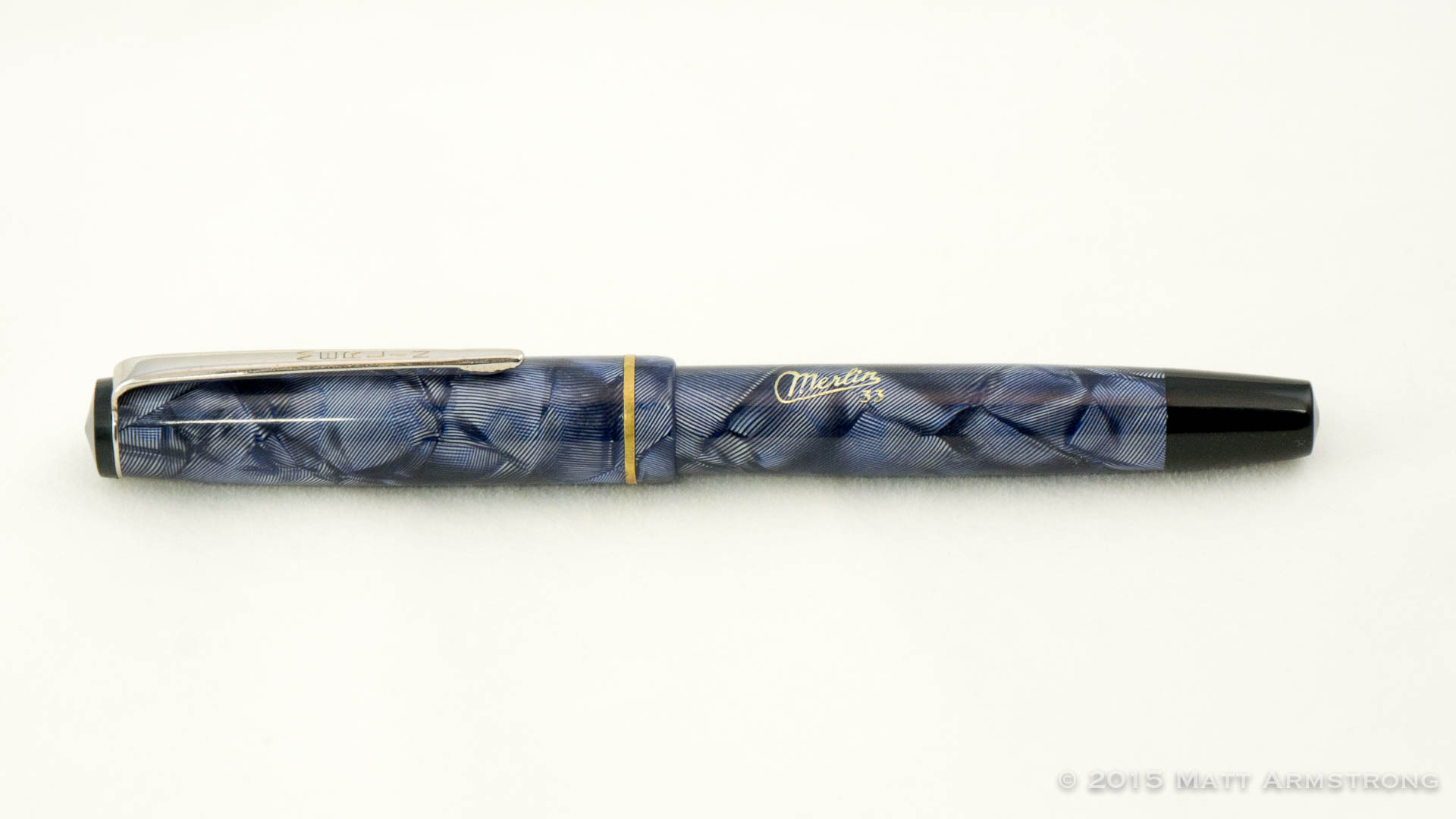 When it comes to vintage fountain pens, there are a large number of manufacturers about whom definitive knowledge is very difficult to pin down. The Merlin Pen Company is one of those manufacturers. There appears to be no definitive information about the company online, but there are several theories. The most common of those theories is that the Merlin pen company was a German company that operated after the close of World War II, making pen parts that were shipped to Amsterdam for assembly and sale in the Dutch market.  One of the more fanciful tales about the Merlin Pen Company I found centered around a rumor that someone discovered a large number of NOS Merlin pens stashed in a cave in France by resistance fighters.

A little closer to the truth seems to be the account of Andreas Lambrou of Classic Pens fame, related by Matt (no relation) on FPN in his review of the Merlin 33. Apparently, in 1987, the widow of the Dutch distributor of Merlin pens tried to unload her remaining stock of 10,000 Merlin 33 and Merlin Merlinas, which were still unassembled. Andreas and Keith Brown bought 6,000 of the pens. Merlin manufactured the 33 in 56 different colors, and Classic Pens still has a complete set of all of the colors of the 33—at least as of 2006. (I would love to see that documented online somewhere.)

I had never heard of the Merlin Pen Company when I stumbled across an eBay listing for this 33, made out of one of the most unique celluloids I had ever seen.  According to farmers dating only app, it’s a real “nitrate celluloid.” I have heard this color called “purple web” celluloid, and it is a unique lavender/purple/light blue hatched pattern that I have been told is fairly rare.  I don’t have any purple pens, and I like purple quite a bit. Plus, at well under $100, the price was right, and I bought it.

The Merlin 33 is a small pen, only a touch larger than the Waterman 52 1/2 v.  It has a very traditional design, hearkening back to the 1930s in profile. The pen has flattened finials with slightly pointed tips. The clip, which is not terribly sturdy, attaches to the cap with a ring that is visible between the cap finial and the rest of the cap. There is a single metal band just above the cap’s lip.

Removing the cap you find a concave black section (ebonite?). The pen’s barrel swells ever-so-slightly in the middle, and then comes to a black blind cap holding the pens button-filling mechanism.  (A side note: I adore button fillers. I wish that some manufacturer out there would make button-fillers an option for their pens. They’re fun.) The middle of the barrel has a foil-embossed Merlin 33 logo imprint, which looks like new on my pen.

Also, of note, there is a seam in the purple web celluloid that runs the length of the cap and the barrel. I know next to nothing about the manufacturing process of celluloid, but this would lead me to believe that this particular celluloid was cast in sheets and “rolled” to form the round parts of the pen, rather than cast in rods. Perhaps I’m way off base, but I’ve not seen a seam on celluloid pens in the past.

The nib on this pen is made of 14k gold, and the feed of ebonite.

In my hand, this is a pen that requires posting.  It’s far too short to use unposted and still write with anything approaching legibility. Fortunately, the cap posts nicely. I am a bit worried about the lip of the cap cracking from being posting, and with posting causing scratches to the barrel, as the cap posts with friction only. Fortunately, the cap’s band will help to keep any craking of the cap lip that does occur to a minimum.

When posted, the pen is a nice size. It is narrower than I generally prefer on my pens, but for some reason I haven’t quite been able to identify, it doesn’t bother me on this pen. I do generally hold the pen a little bit further up the barrel, but I will say that the shape of the section is as close to perfect as I have ever seen. So if you have a small enough hand to hold the pen on the section, I think you’ll find it quite comfortable. 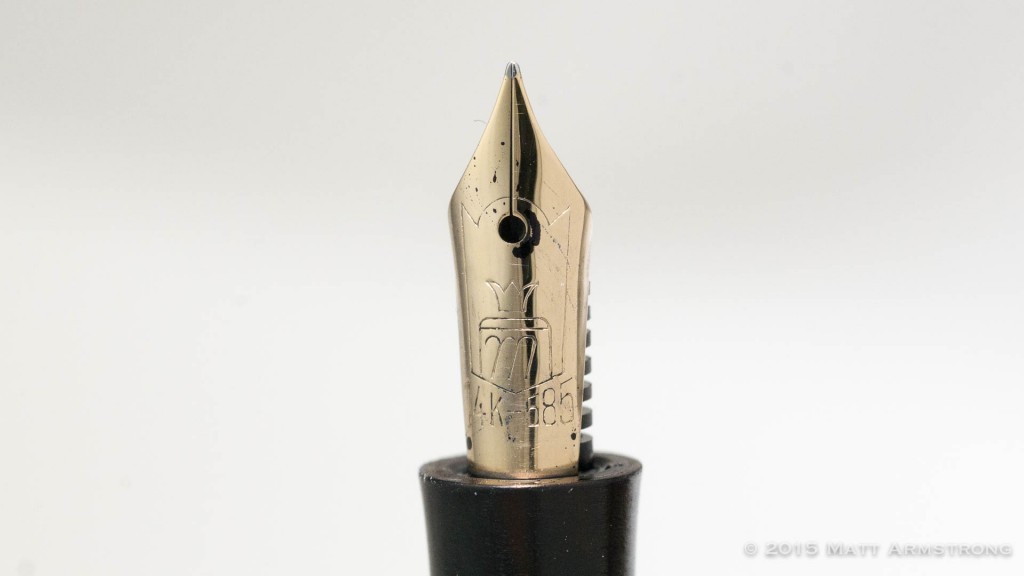 This pen writes wonderfully. The seller who listed this pen on eBay didn’t mention anything in particular about the writing characteristics of the nib, so I was taking a bit of a chance when I bought it. Once I inked it up and put it to paper, I was very pleasantly surprised. The pen has a very fine line (I would consider it a western-style extra fine, or a Japanese-style fine.) It’s not a terribly smooth writing experience, providing more feedback than I generally prefer. However, the reason it doesn’t bother me is that the nib on this pen is quite springy. It’s not a full-flex nib, but it’s a solid semi-flex, with a lot of line variation, and a very snappy spring-back. It’s a lot of fun to write with. Interestingly, it makes a little bit of a clicking noise when writing, which sounds a bit like the tines slapping together or against the feed. It doesn’t seem to affect the pen’s writing in any way.

Thus far, this pen has been a very solid performer. Its fine line with a light hand is not drenchingly wet, but is nicely consistent, and great for lower-quality papers. When flexed, it lays down a nice, juicy line. I haven’t had a single issue with the ink flow being unable to keep up with my writing. It’s a pleasure to use, and it has worked out of the gate every single time I’ve picked it up.

If I had to find fault with the pen, the lack of ability to tell the ink level, common to all button- and lever-filled pens, would be my main complaint. But as it’s so typical of the filling system, it’s hardly worth a mention. And the smaller size is a bit disappointing. Merlin only ever made two models that I can find, the 33 and the Merlina, both of which were smaller pens.

Despite my general dislike of small and narrow pens, I’ll be keeping this one around for a good long while. It’s a great pen, made from a lovely material, and has a fantastic nib on it. And for just over $70? I consider that a real steal.  It’s just proof that there are still wonderful deals to be had in the vintage pen world if you’re willing to look at brands other than the most well-known names (e.g., Waterman, Sheaffer, Parker, etc.)