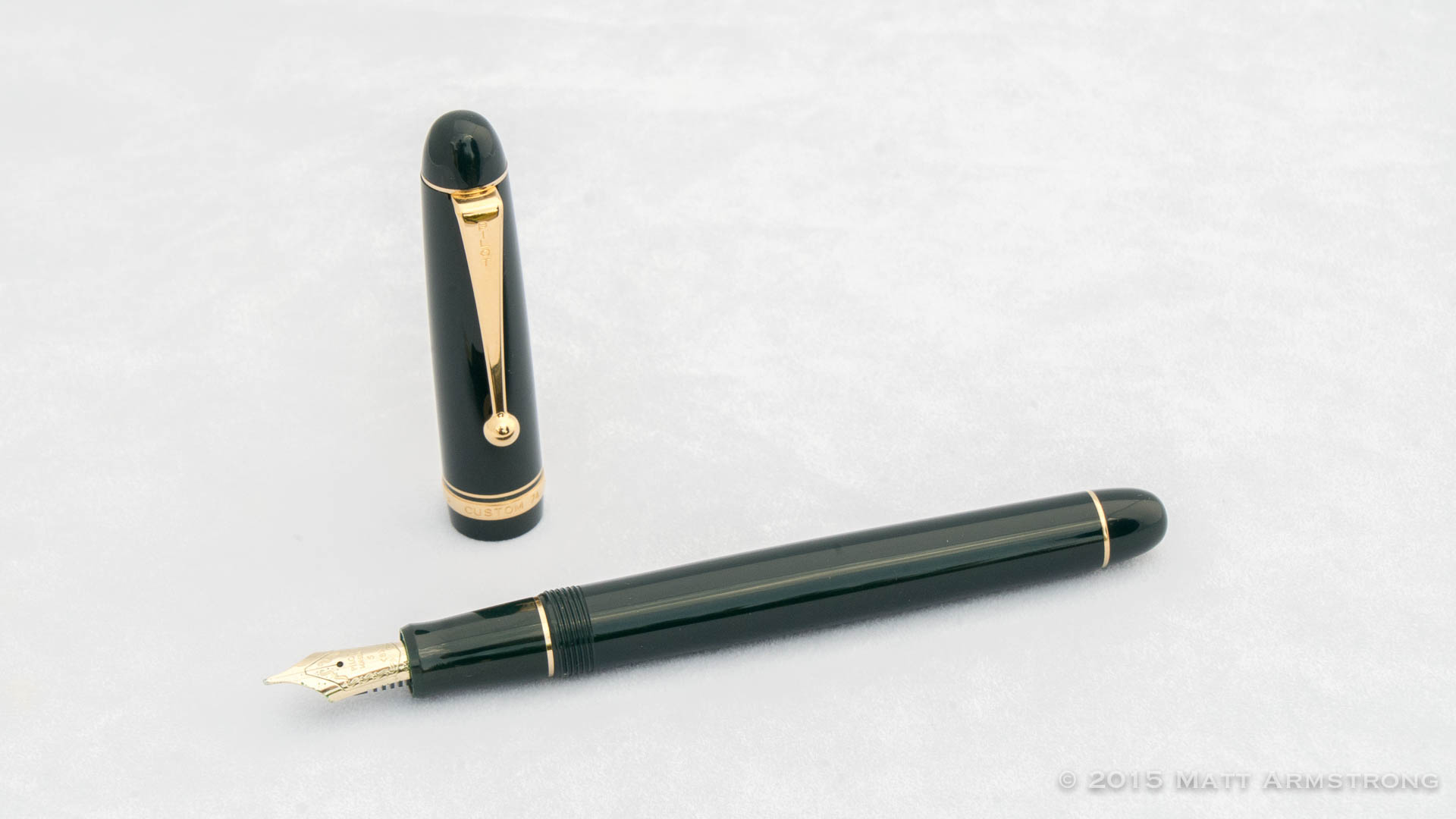 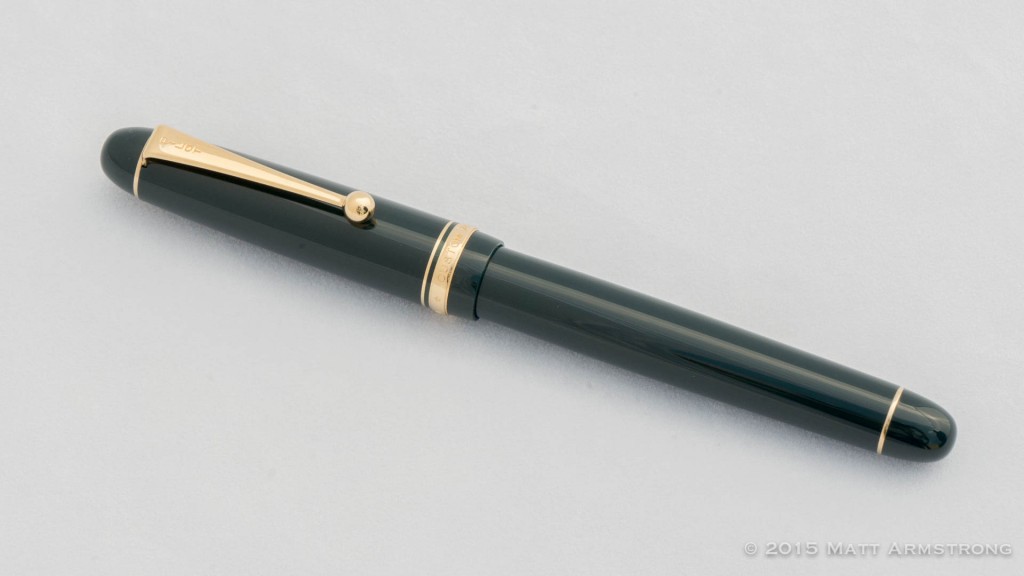 The Pilot Custom 74 is often considered to be one of the best “next step” pens for people who have decided to delve more deeply into the fountain pen hobby. At $160USD (or less than that if you buy direct from Japan), the Custom 74 is priced outside of the realm of impulse buy for most people. It occupies the same place as the well-known, mass-manufactured options such as the Lamy 2000 or the Platinum 3776, or the more customized, craftsman-built Edison and Franklin-Christoph offerings. So, how does it stack up in this middle tier of pens?

Like many of Pilot’s pens, the Custom 74 is an understated, classic-looking pen. With a traditional cigar-shaped body, the 74 possesses very little to draw the eye. My 74 was ordered from a Japanese-based eBay seller, and came in a dark green plastic that looks almost black in most light. This particular color is not available from sellers in the U.S.

The pen’s plastic parts are all injection-molded, out of a relatively cheap-feeling plastic that may be specific to this color. I haven’t had a chance to interact with the 74s of other colors, so I don’t know if the materials on those models feel more or less robust. Despite the materials feeling a little sub-par, it’s clear that Pilot manufactures its pens with an eye toward detail and quality control. The plastic may not have the same feel as a high-quality acrylic or resin (yeah, yeah, yeah, I know acrylics and resins are plastics too…don’t bother), but it doesn’t feel poorly made by any measure.

If I had it to do over again, I probably wouldn’t buy the dark green version of this pen. As mentioned above, it’s so dark it looks almost black. I was hoping for a bit more of a forest green, as the online photos appeared. If I were doing it over again, I would probably go with a demonstrator version of the pen, particularly as I like the way they look with a different-colored section. (You can see what I mean here.)

The pen’s cap features a gold-plated clip attached to the main body of the cap via a ring held in place with a rounded finial that helps to form the cigar-shaped silhouette. The clip has an almost triangular shape with a spherical clip ball at the end. It is also quite stiff, and serves its functional well, although the design is rather pedestrian. The bottom of the cap is highlighted by one thin band and one thick band on which is stamped the words “Custom 74 * Pilot Made in Japan.”

It takes 1 3/4 turns to remove the twist-on cap from the barrel on very smooth, but slightly loose, threads. Underneath, there is a slightly concave section and a smallish 14k Gold nib. Along with the Platinum 3776 and the Lamy 2000, the Custom 74 is one of the least expensive modern pens you can find with a gold nib, which is another reason why it is often cited as a “next-step” pen.  The nib has a round breather hole and  a fairly classical scrollwork design stamped into the face.

The section’s tenon is metal, and that, combined with the barrel’s end washer and finial, means that the pen can’t be used as an eyedropper. As a result, you’ll be stuck using one of Pilot’s proprietary cartridges or converters. My custom 74 arrived with the nearly useless Con-50 twist converter. It works well enough, but has a ludicrously small ink capacity. The Pilot Custom 74 sold retail here in the U.S., comes with a much larger (but harder to clean) Con-70. If you go through ink quickly, I would suggest you acquire a Con-70. Or, perhaps even better, some Pilot cartridges that you can refill with an ink syringe.  My experience with the Con-50 is that I could only get 5-7 pages of writing out of a fill before the converter was empty.

The Custom 74 is a nice, albeit understated, writer. I opted for the broad nib on this Custom 74. I generally find Japanese Fines and Mediums to be too fine for my personal tastes (and they don’t show off the fun qualities of the ink enough), so I wanted something that wrote a little closer to a western-style medium. The general rule of thumb is that a Pilot nib is 1 to 1.5 times narrower than the same designation in a western-style nib. I find that to be true for fine and medium. When Pilot gets to the broad nibs, though, it was only about 1/2 a width narrower than most western broads I’ve tried. My sense is that, the further you get away from fine, the closer the nibs get to parity with their German counterparts.

Like every Japanese nib I’ve ever used, this 14k nib was left with a lot of texture. It is quite smooth, with a moderately-sized sweet spot, but Pilot has opted not to polish the nib too much. If you are the kind of writer who likes to feel the friction of the nib on the paper, without any scratchiness, this is the nib for you. If you’re looking for that “slipping on buttered glass” feeling, you’ll probably need to do some polishing of your own. The pen’s ink flow is slightly wet of moderate, and thoroughly, completely, 100% consistent. In the weeks and weeks I had this pen inked, I never had a skip, a hard start, or any sign of ink starvation.  Even after leaving the pen unused for several weeks in a row, the pen started writing out of the gate.

In the hand, the pen is lightweight and pretty comfortable. It’s a bit longer and more slender than I generally perfer, but I didn’t notice any sort of discomfort or cramping from extended writing. When posted, the pen is a little bit long, but the cap is light and the pen remains nicely balanced in my hand.

The Pilot Custom 74 is not a flashy pen. I imagine it being right at home in the board room of a company where suits and ties are the norm (as opposed to a west-coast technology company like mine where sweatpants and t-shirts are not unheard of as workwear.) Its understated design and pedestrian materials aside, the pen is extremely well made, and one of the most reliable, consistent writers I’ve used. Although this pen doesn’t speak to my own personal design sensibilities, it’s a pen that I can highly recommend as a great step up from the sub-$50 pen range, or for anyone wanting to try a modern gold nib.