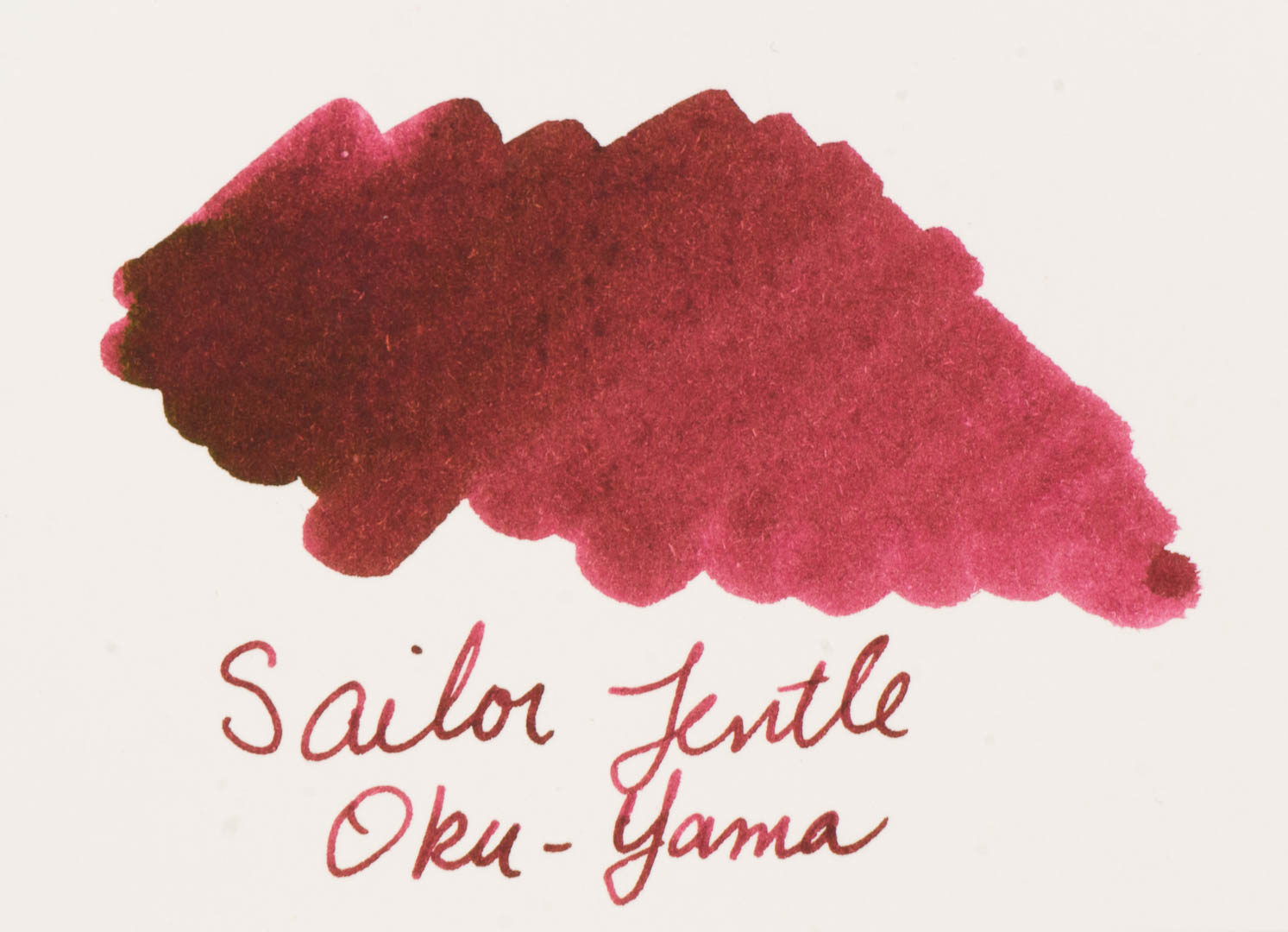 It’s been two and a half years since I purchased my first fountain pen, and only slightly less time before I purchased my first bottle of ink. In that time, one thing that never ceases to amaze me is how frequently ink manufacturers discontinue inks…especially production-line inks that are much beloved. I still ache to know that my beloved Caran d’Ache Grand Canyon has gone the way of all the world. Yet, time and time again, the manufacturers release these miserable limited edition inks or discontinue inks that people really love. It’s a cruel, hateful practice. (Although, to be fair, I may be in a bit of a melodramatic mood as I write this.)

When Sailor announced last year that they would be discontinuing a large number of their Jentle-line inks, I was surprised. When I heard that one of those inks would be the highly-acclaimed Sailor Jentle Grenade, I felt truly poleaxed. Jentle Grenade was a lovely pomegranate-colored ink that behaved wonderfully well and wrote with the most luscious golden/green sheen. My shock was apparently shared by many in the community, as all remaining stocks of Jentle Grenade disappeared virtually overnight.

Sailor replaced the discontinued Jentle inks with a new line they called Jentle Four Seasons. Among those in the Four Seasons line was an ink that appeared to be Sailor’s replacement for the discontinued Grenade: Oku-yama (Remote Mountain Burgundy). So, how does the new Oku-Yama stack up to the old Grenade? Pretty darn well, it turns out. 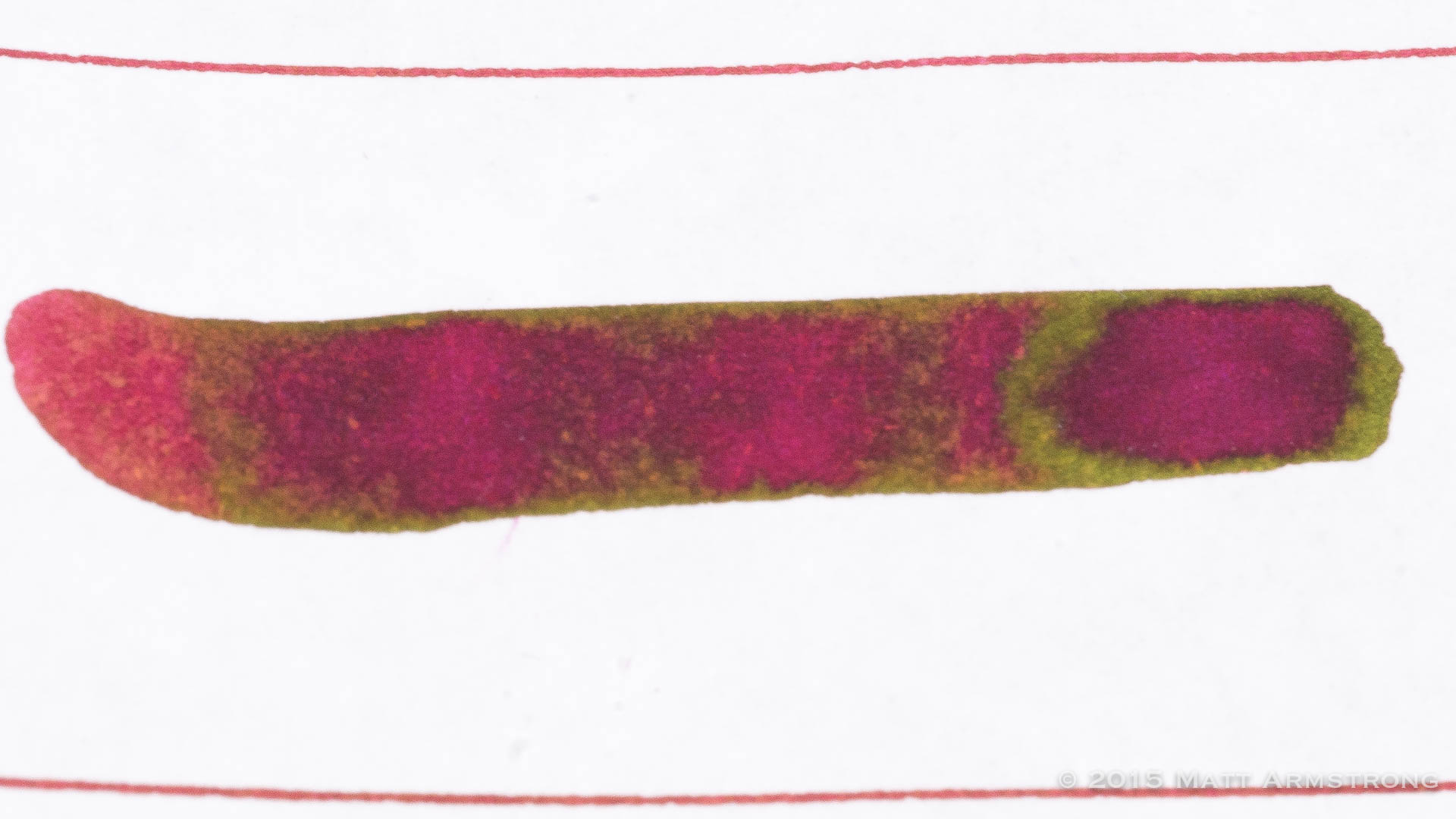 The new Four Seasons inks come in the same short, wide 50ml bottles as the old Jentle inks. The bottles have a nice, wide opening and base, and come with a plastic insert which, in theory, you can use to fill up your pen when the ink level is low. In practice, I pretty much loathe these plastic inserts. They aren’t deep enough to allow filling up pens with large nibs. Even some of my #6-sized nibs won’t fill in the plastic insert. Usually the first thing I do upon inking up a new Sailor ink is don some latex gloves, and pull the insert out of the bottle. With the insert out of the way, I find it much easier to fill my pens, as the wide opening allows me to angle my pen to submerge the pen’s intake.

The ink’s new packaging is quite attractive. This is a big deal for me, since I display my inks on a shelf, but keep them in the boxes to prevent them from being exposed to too much light. The multi-colored printing is graceful and attractive, but clearly intended for the Japanese market, as the only thing printed in Latin characters on the box is the name “Sailor.”

Sailor Oku-yama, like its burgundy predecessor is a lovely, well-behaved pomegranate-colored ink with a lovely golden sheen. Side by side, it’s almost impossible to differentiate the two inks. There is, perhaps, a touch more of a blue undertone in the Grenade, but unless you view them together it is very difficult to tell them apart.

Sailor inks are consistently solid performers. The company appears to pay a great deal of attention to the inks’ performance characteristics, resulting in inks with very well-balanced levels of saturation, lubrication, and ink flow. They are inks I don’t mind using in vintage or high-end pens.

Oku-yama certainly fits the mold of the solid performer.  The ink was wonderful in every pen I inked for this review except one. Flow felt on the slightly wet side of normal, and resulted in a lovely, smooth line. It cleans easily out of pens–even demonstrators. On premium papers, there was little in the way of bleed-through or even ghosting. There was moderate shading. But on premium paper, the real star of this is the incredible golden sheen.

I did find dry times to be a little on the long side with the premium papers. Both Rhodia and Tomoe River were dry by 30 seconds, but that’s about 5-10 seconds longer than what I usually find with most inks on those papers. Nobody will mistake this ink as being anything close to permanent, either. With the water tests, most of the red pigment comes off quite easily, leaving a bit of a purple-blue haze behind. Oku-Yama appears to be particularly susceptible to bleach, however, and just a few drops of bleach complete erased all indications that there had ever been any ink there at all.

As mentioned earlier, the one pen in which this ink didn’t perform well was the Pilot Custom Heritage 912 with a Falcon (FA) Flexible nib. For some reason, this ink did not play well with that particular pen. (Perhaps it’s because Pilot and Sailor are competitors!) I’m not certain why, but it felt as though the surface tension of the Sailor ink wasn’t enough to bridge the gap created by spreading the tines.  Cleaned out and inked with Diamine or Pilot inks, I’ve not had any issues with the railroading I saw with Oku-Yama.

Sailor Jentle Four Seasons Oku-Yama appears, in every way, to be a worthy successor to the much-beloved Sailor Jentle Grenade. Its color is so similar as to be nearly indistinguishable. It’s performance is in keeping with Sailor Inks’ well-known and respected consistency. It’s a lovely color, easy to clean from the pen, and has a truly spectacular sheen. It really is a beautiful ink.