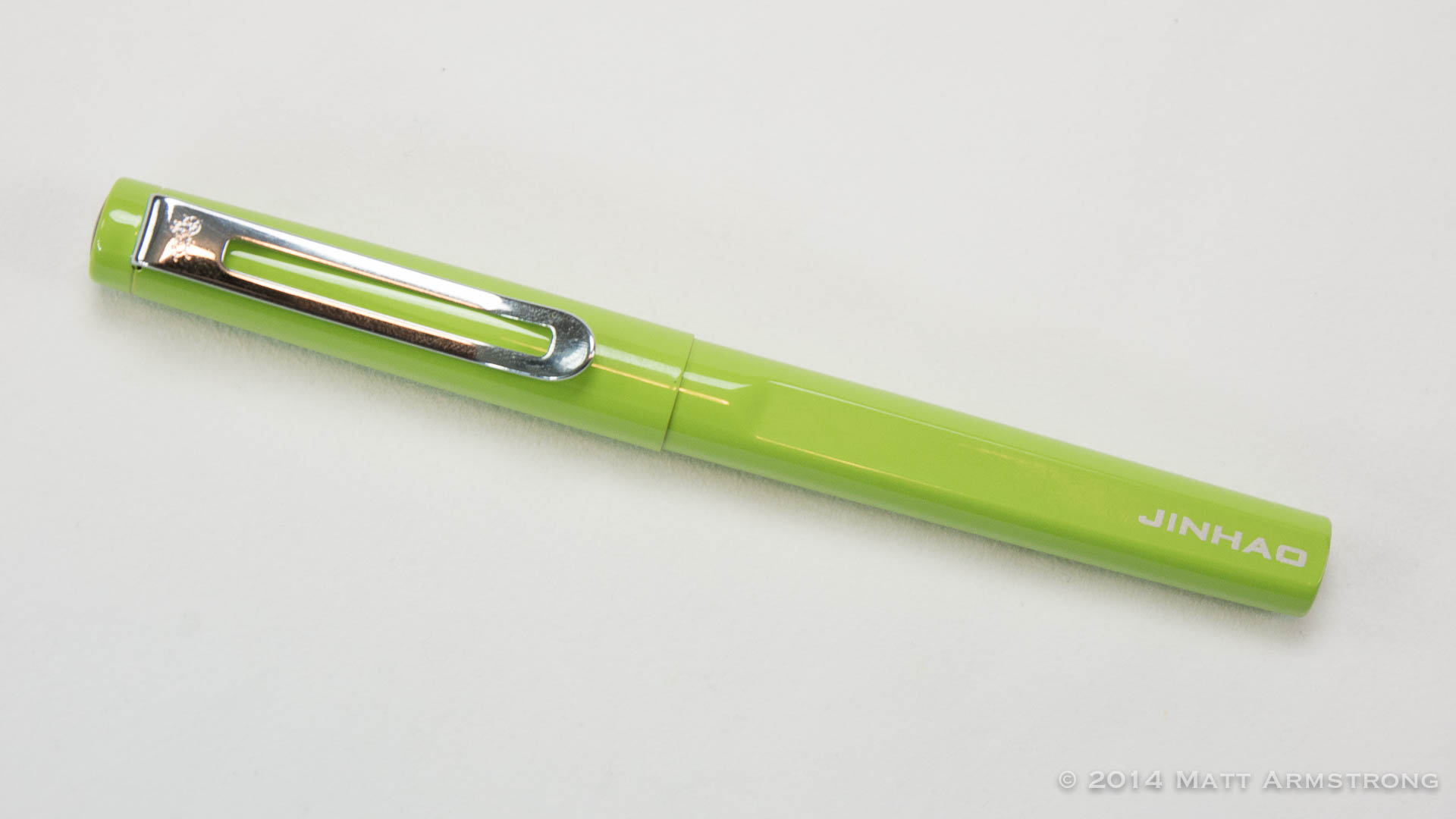 A special thank you to viewer Chris, who sent me this pen with a letter for me to review it.

Recently, someone left a comment on one of my YouTube videos asking why Chinese pens have such a bad reputation in the fountain pen community just because they’re cheap. It seems, they said, that by comparison, most other fountain pens are way overpriced. You can get some really good-quality pens for an incredibly inexpensive price when you order direct from China.

Earlier in my own fountain pen hobby, I spent a lot of time perusing and buying these inexpensive Chinese fountain pens. It fed my acquisition desire without bankrupting me. I got to learn more about what I liked and what I didn’t like in my fountain pens. Some of the pens I got were real dogs. Others were incredible pens that are still in my collection to this day. It was a little hit or miss, but it was a very fun time in my own journey. And those for whom $7 or $10 is really all they’re able (or willing) to spend on a pen are able to find some lovely writing instruments at a great price.

There are, I believe, a lot of reasons why many serious pen people don’t fall all over themselves when it comes to inexpensive pens from Chinese brands. Quality control isn’t terribly consistent, and so you never know how the nib will write, or how well the snap-on cap will stay closed, or how durable the finish will be. And to manufacture such intricate items at such a low price, someone ends up footing that bill. In the case of these inexpensive pens, the low prices could easily be a result of government subsidies and/or poor worker conditions. (For a great analysis, check out Dr. Jonathan Deans’ post on the matter, on his wonderful Pen Economics blog post, singles in cyprus. )

There is one additional reason which is not of major concern to many, but is a personal bugaboo of mine: Intellectual property theft. Many of these inexpensive pens from China, regardless of the quality, are knockoffs or near-knockoffs of designs of pens by other companies. For instance, the farmers dating only app I reviewed a while back is a near-knockoff of the Parker Duofold Centennial. The Hero P51 is a pen identical in design to the safe christian dating sites. (Rumor has it that the Chinese government siezed the equipment in the Parker Pen factory, and that these P51s are being made on Parker’s original equipment, albeit with more flimsy materials.) The http://penhabit.com/legit-dating-sites-free/ is nearly identical to the Monteverde Impressa (although that may well be a case of Monteverde paying Baoer to manufacture the pen for them.) And the Jinhao 599 is a near-knockoff of the iconic Lamy Safari, Vista, and AL-Star pens. 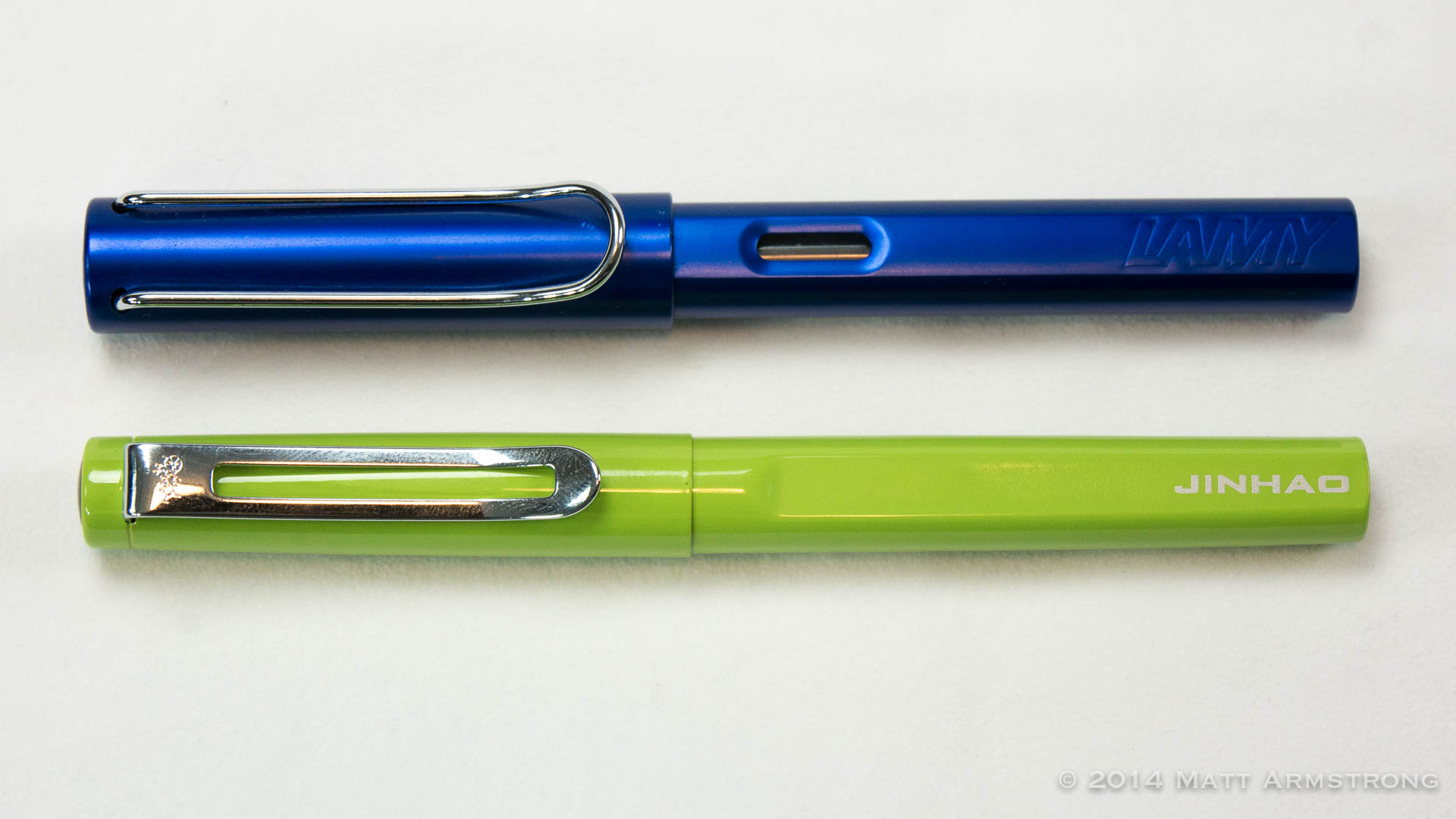 Side by side, it’s clear that the Jinhao 599 isn’t an exact copy of the Lamy Safari. (True knockoffs can be found out there, though; Goldspot Pens did a great video on how to tell the real ones from the fakes.) It has “borrowed” enough design queues from the original, however, for me to classify it as a near-knockoff. Rather than iterating on a standard pen shape, like the standard cigar shape that is so common in the pen world, Jinhao has clearly tried to reproduce Lamy’s design–just with a few tweaks. 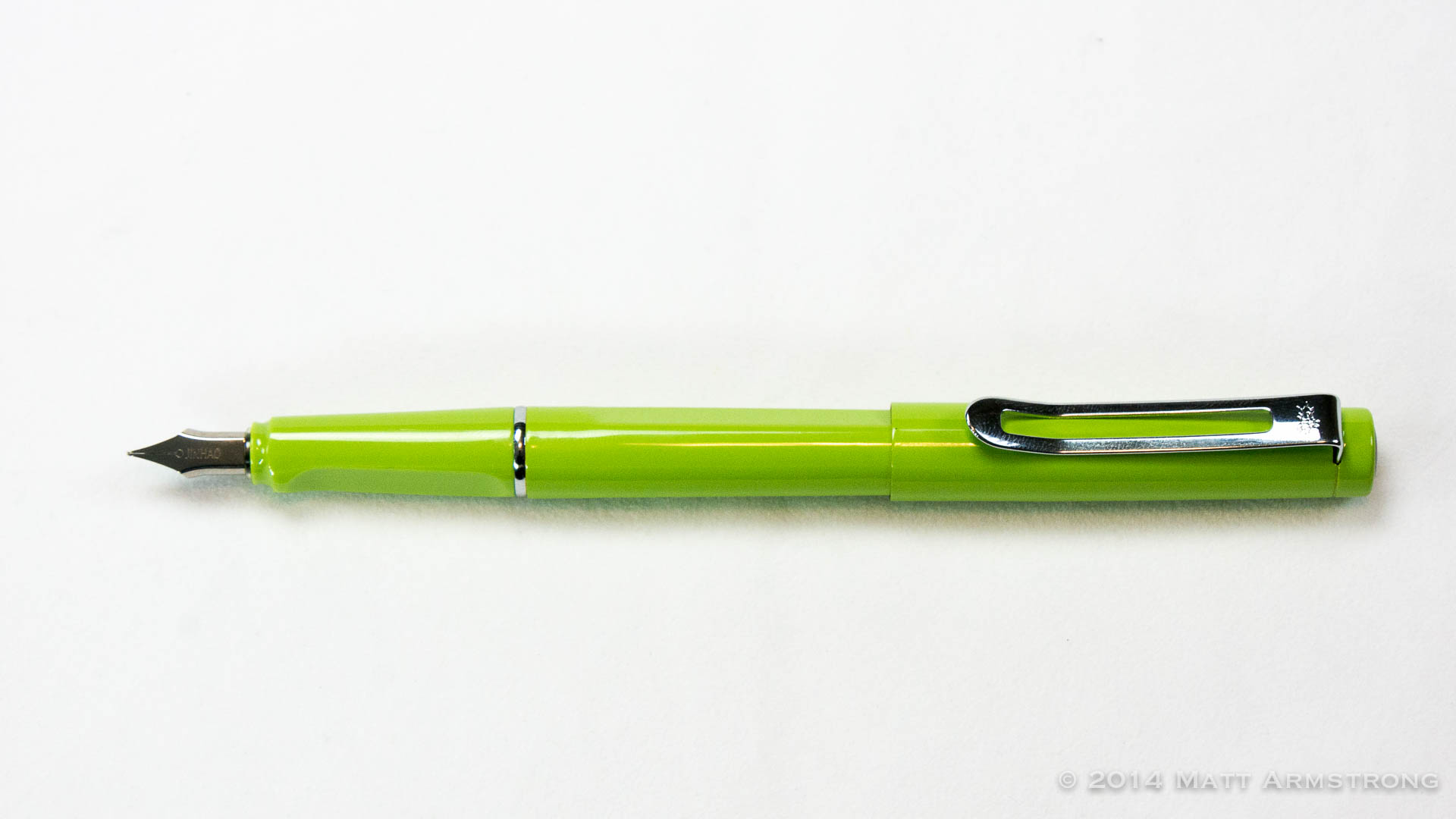 The 599 cap and body are made of brass, giving the pen a slightly heftier feel than the plastic pens that were the inspiration for their design. The pen that I received is painted neon green, very similar to the neon green pens that Lamy seems to put out every other year. The cap of the 599 has a black plastic inset which is polished to a nice shine, vs. the matte plastic inset with the “cross” that is indicative of a Lamy fountain pen. The cap snaps onto the pen securely. Perhaps the part of the pen that is the most different between the two is the clip. The 599 has a flat, blade-like clip with a cutout compared to the Lamy’s horseshoe-shaped bent wire clip. The barrel has a nearly identical shape, flattened on two sides, but the metal barrel on the 599 does not have the cutouts that appear on the Lamy pen and which allow you to to see the ink level in the converter. The 599 is also slightly smaller in overall size than the AL-Star against which I compared it.

Removing the cap, the pens’ similarities become even more apparent. Jinhao has co-opted Lamy’s very unique triangle grip. This grip is one of the reasons I don’t care for the original Lamy, and it does me no favors on the Jinhao either. The 599’s nib looks like it was made to slip on and off like the nibs on the Lamys, but I’ve never been able to remove the nib. Instead, if I pull on the nib, it removes the nib and the entire plastic feed together. 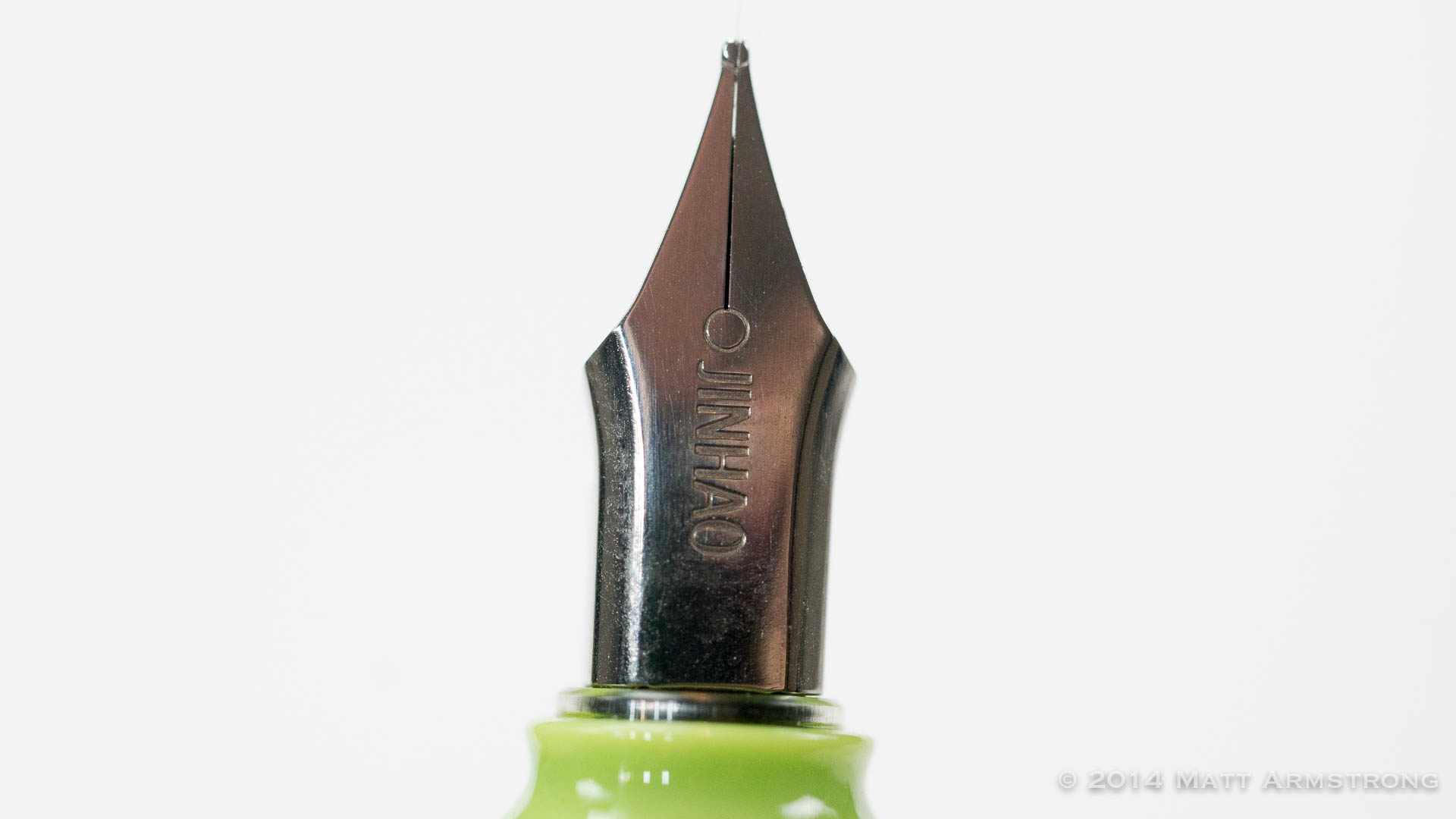 The nib on my Jinhao 599 was fine-ish (possibly extra-fine by Western standards; it’s hard to tell since Jinhao doesn’t stamp a designation into their nibs.) Although it pains me to say it, it’s a pretty good nib. It writes consistently enough that I feel comfortable using this pen for my ink reviews, but it’s not the kind of nib that I would ever choose to sit down and write out a long letter with. The tines were in alignment, though, and I had no issues with skipping, hard starts, or ink flow. For a pen that retails for $2.99, it’s a pretty darn good writer. 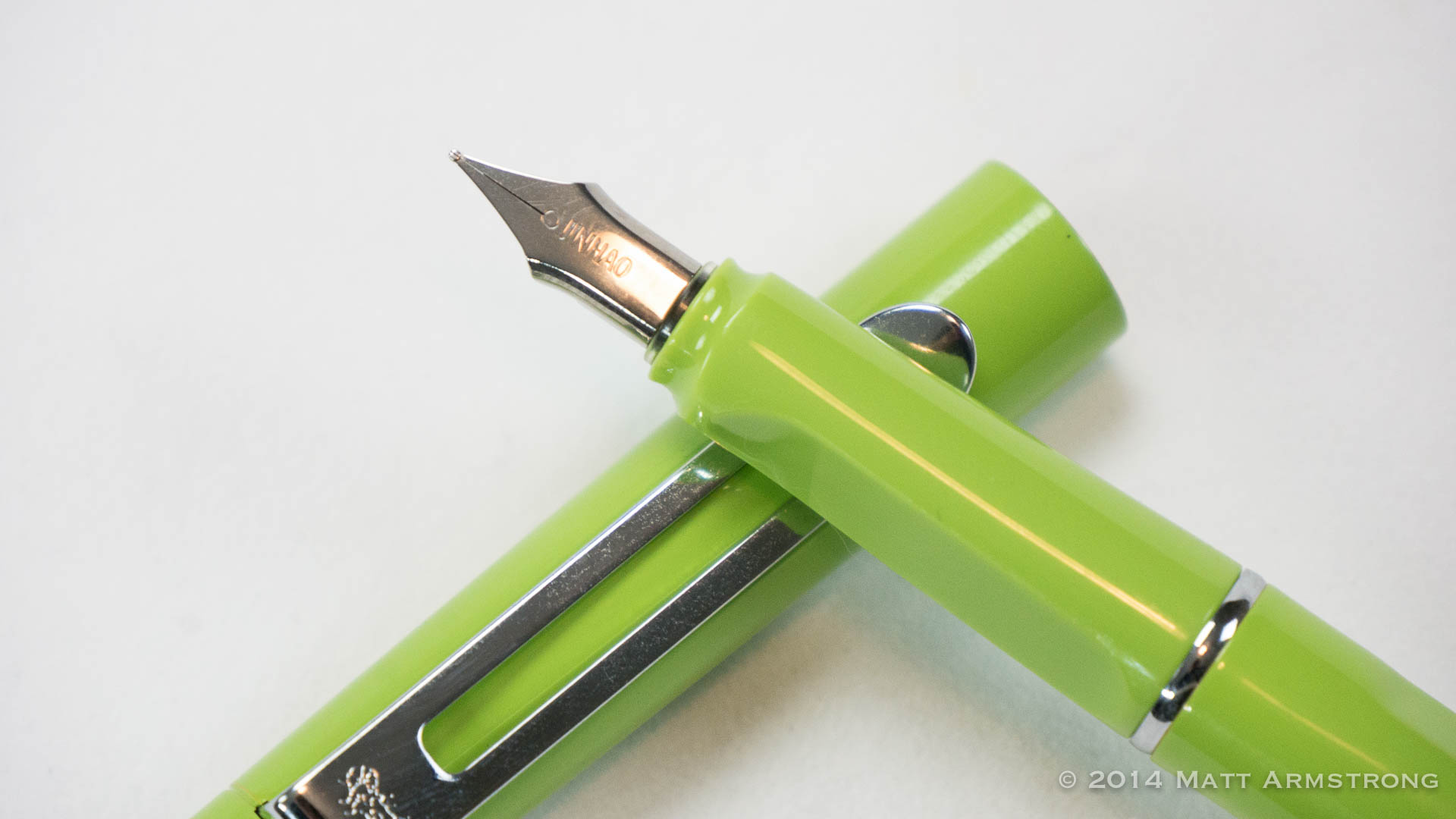 One of the areas in which I will give the point to the 599 is around its filling system. The Jinhao 599 wisely uses an included standard international converter, and can also accept long and short standard international cartridges. The Safari, on the other hand, uses Lamy’s proprietary converters and cartridges, and doesn’t come with an included converter, which itself costs more than the entire price of the Jinhao 599.

I should note that when the 599 arrived at my house, the nib unit had been installed incorrectly, and was rotated 90° to the grip, rendering the pen unusable. Fortunately, it was quite easy to grab the nib and feed with my fingers and twist it back into place.

So, is the Jinhao 599 a good pen? It’s a fine pen, I suppose. I never really liked the Lamy Safari or its kin, so it’s hard for me to get excited about a knockoff of a pen that I never really cared for to begin with. My experience has been that it’s one of the best $2.99 fountain pens I’ve used (which, admittedly, is a very small number.) But it’s not a pen that I would ever spend much time with it. I will continue to use the pen as the “fine” example in my ink reviews, because I have found it to be such a consistent performer. But this is one of those pens that gets cleaned out the instant the ink review is over. I have absolutely no desire to use it for anything else.