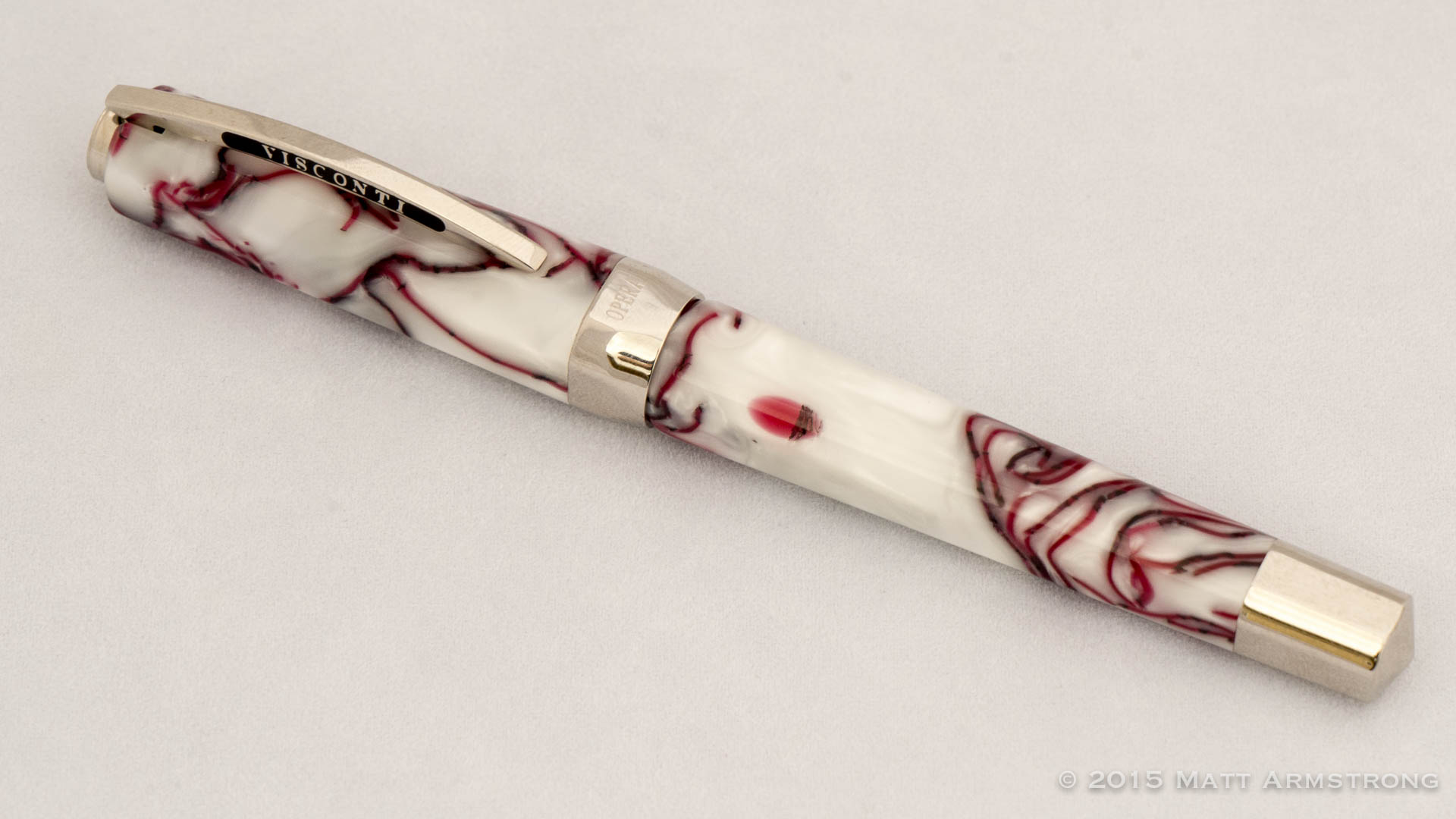 Love them or hate them, there are few pen companies out there that manage to get their hands on or build pens from the vast array of eye-catching materials as does the Italian company Visconti. Whether it’s resin made from Lava Rock, acrylics patterned after impressionist paintings, or demonstrators with bands of colors swirling about, Visconti’s materials are unique and bold. And to my eye, usually quite attractive.

Aside from lovely materials, Visconti’s pens are usually well made, and most are excellent writers. It’s one of the reasons why Visconti is one of my favorite modern pen manufacturers, and why I have so many of their offerings in my collection. 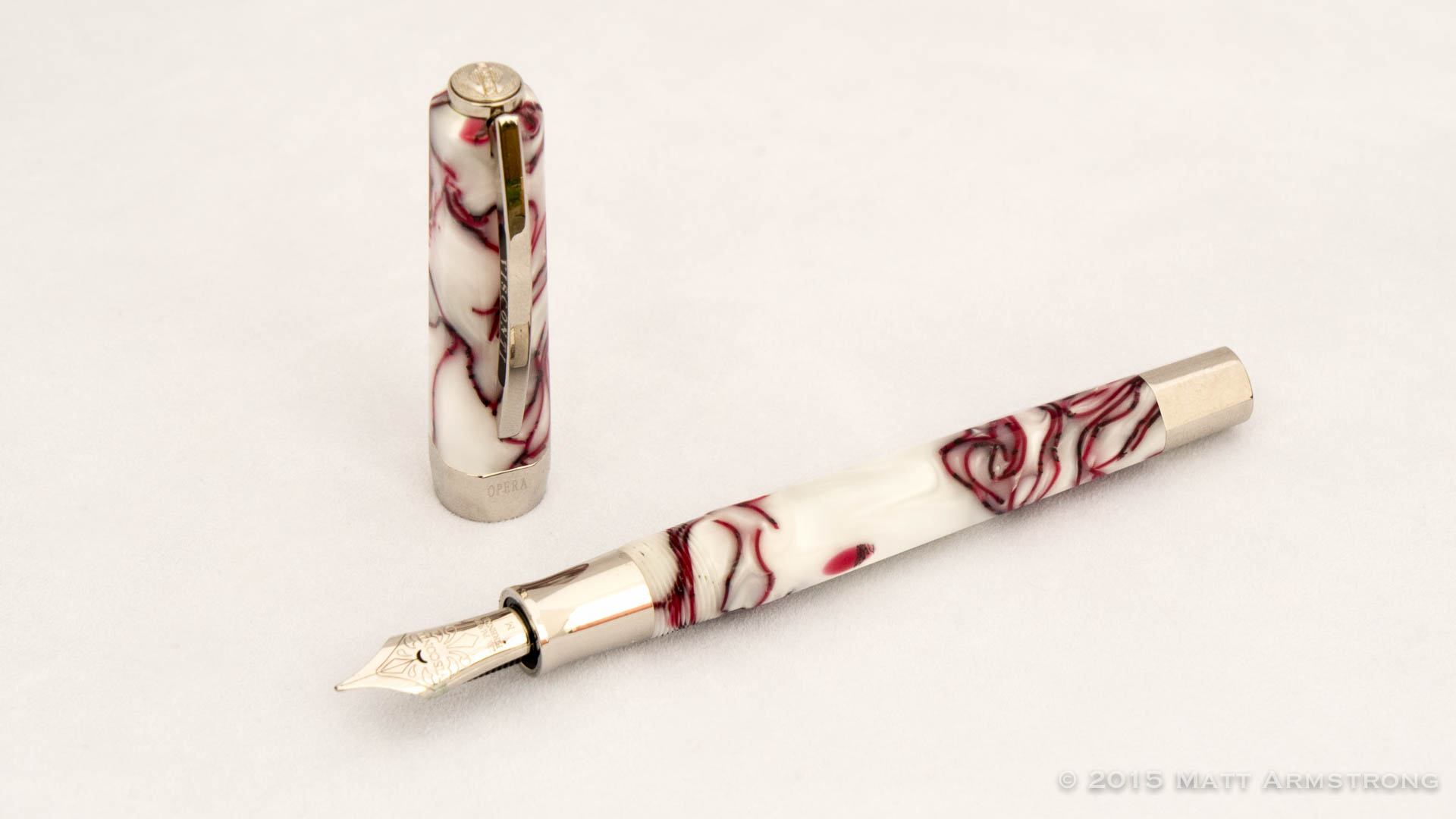 The Opera Club is one of Visconti’s “Circling the Square” line of pens. This line features a four-sided barrel on which the corners have been rounded down quite a bit. The resulting profile is pleasant to hold, but will keep the pen from rolling easily off the edge of the desk.

The Cherry Juice resin from which the Opera Club is made is one of the flashier materials I’ve ever seen in person. It’s a white, almost quart-like background with a lot of depth and chatoyance. It is highlighted throughout with deep, blood-red veins, striped with red-black. It’s bold and graphic, and certainly not for everyone. Recently, when showing off my pen collection to some friends who aren’t into pens, one friend picked this material as his favorite, and another said it was his least favorite. Personally, I really like it. The white background looks like stone, and the pen has a bit more heft than you’d expect for an resin pen. 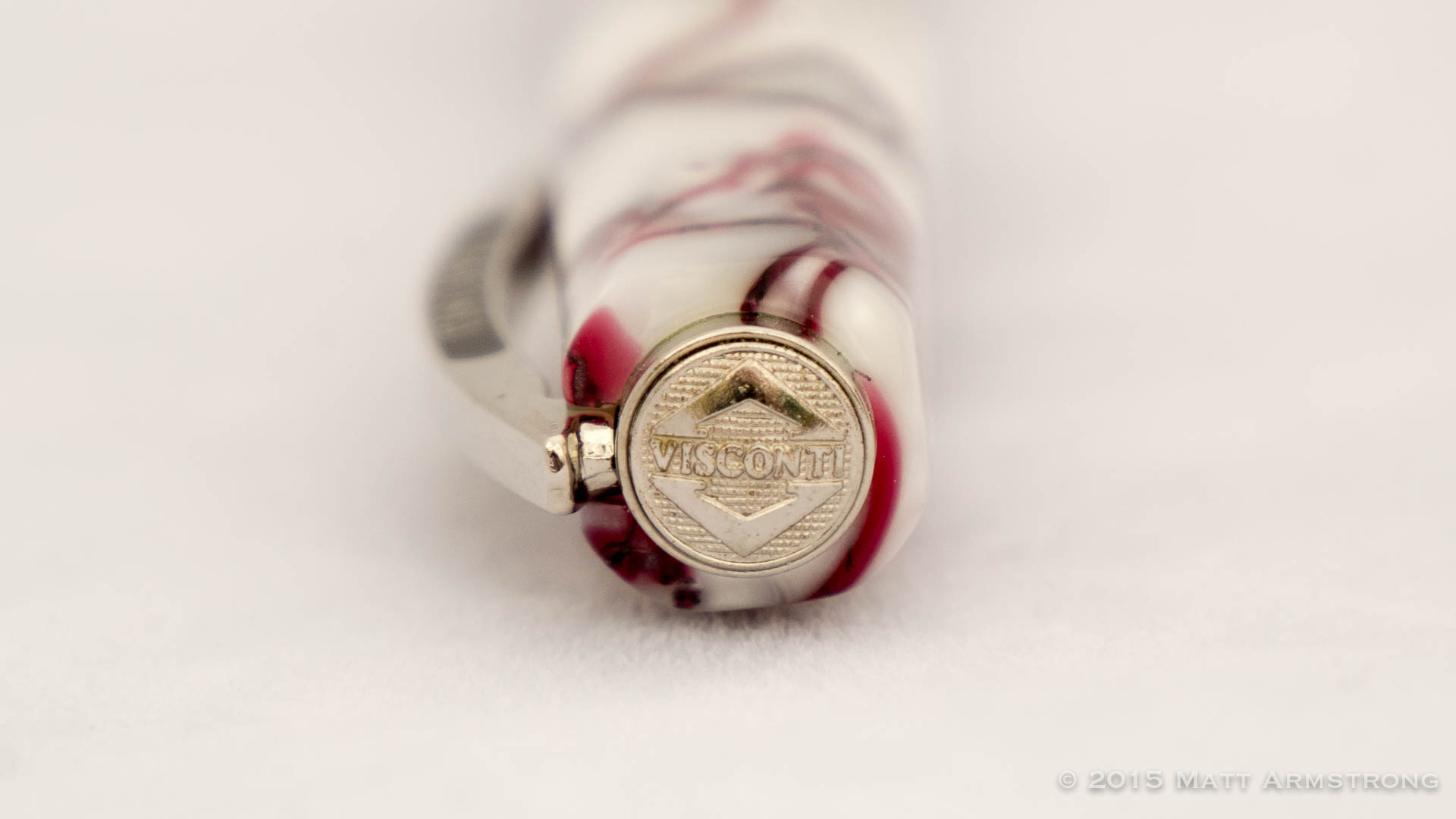 The top of the cap features the Visconti medallion. I can’t tell for sure, but it appears to be one of the replacable medallions from their “My Visconi” system, but I couldn’t find any confirmation of that online. Frankly, I’ve never seen the replacement medallions for sale anywhere, so even if it were one of the replaceable ones, it’s not like I would have anything to replace it with.

The cap features Visconti’s standard, spring-loaded bridge clip. This one is a lot tighter than the ones on my other pens. I hear people complaining all the time that the bridge clips wouldn’t keep the pen in your shirt pocket. So for my own curiosity, I put on a dress shirt, put the pen in my pocket, and stood on my head for about 30 seconds. It’s not a scientific test, mind you, but it never did fall out of the pocket. In any case, I don’t keep my pens in my shirt pockets, and I find the bridge clips quite convenient to use with the cases I use to carry my pens about.

At the base of the cap is a large, silver-colored, and very nicely bevelled band which follows the contours of the “circling the square” design. The word “Opera” is engraved on the band just below the clip. The cap on the Opera Club is a screw-on cap, and can be removed with 2 1/4 revolutions.

The barrel of the pen tapers down slightly to a large silver-colored finial, which comes to a bit of a point. It’s beautifully polished, and super-smooth. I was expecting the metal finial to make the pen a little back-heavy, but held in the hand, it simply helps to provide an extra bit of heft.

Under the cap, you have a fairly small metal section, which does tend to be a bit of a magnet for fingerprints. Also, because the section is short, I find that my fingers tend to sit right on the threads of the pen. Fortunately, the transition between section and threads is smooth, and the threads themselves aren’t sharp.

The cap can be posted, but posting tends to make it just a touch back-heavy. I usually don’t post this pen, as it is long enough for me to use unposed. But if you have very large hands, I don’t think the pen’s center of gravity shifts enough to make a huge difference.

never date someone on antidepressants

The pen is a cartridge/converter pen, utilizing standard international carts (both long and short) and converters. The Opera Club does come with a solid, Visconti-branded converter with a nicely engraved metal flange and turning knob. Unfortunately, the converter is so long that the metal of the turning knob tends to click around against the inside of the barrel if you flick the pen about too much. It’s a minor annoyance, but it is one that stuck out to me.

Like most of Visconti’s pens, the Opera Club utilizes their 23k Palladium “Dreamtouch” nib. The Dreamtouch nib, when well-tuned, can be a truly beautiful nib. It has a nice bit of bounce, albeit slightly more “spongy” bounce than you might get with a gold nib. You can coax a bit of line variation of out it, but that’s certainly not how it was intended to be used. The nib was in perfect alignment, but I did find that it provided a bit more feedback than I would prefer, so I did do a bit of smoothing to it. It still has more feedback to it than any of the other Dreamtouch nibs I’ve used, but it’s feedback of the more pleasant variety.

The nib, which is a medium, runs about as wide as you’d expect a European medium to run…not too wide, not too narrow. It does tend to be a bit on the wet side once ink starts running. Getting the ink started, however, has proven to be a bit of a challenge. There appear to be two issues at stake:

First, the converter tends to get the ink stuck up toward the piston, not toward the nib. So I often find myself having to flick the pen occassionally to get the air bubbles to rise to the top. I have heard that flushing the converter with an ammonio solution will often help take care of some of these surface tension issues, but I haven’t tried it yet. Fortunately, it’s a standard international converter, so I can always swap out for another one.

The second issue is about getting the ink to the nib tip. For some reason, the first time I pick up this pen after a long period of unuse, I have to prime the feed a bit. Once that’s done, I don’t have to do it again. The pen never skips, hard starts, or exhibits signs of ink starvation. It’s just that first stroke that always seems to need a little boost. And it’s only when the pen has sat unused for a couple of days.

Aside from that, the Opera Club is a lovely pen, made from lovely materials. I wish the nib had come with a smoother final polish, but that is easily resolved. In the end, though, this is a lovely pen. While the MSRP for the pen is nearly $600, you can find it for SIGNIFICANTLY less than that here are there online. At the time of writing this review, I was seeing prices just over $200. And that, in my mind, is nothing short of a steal.