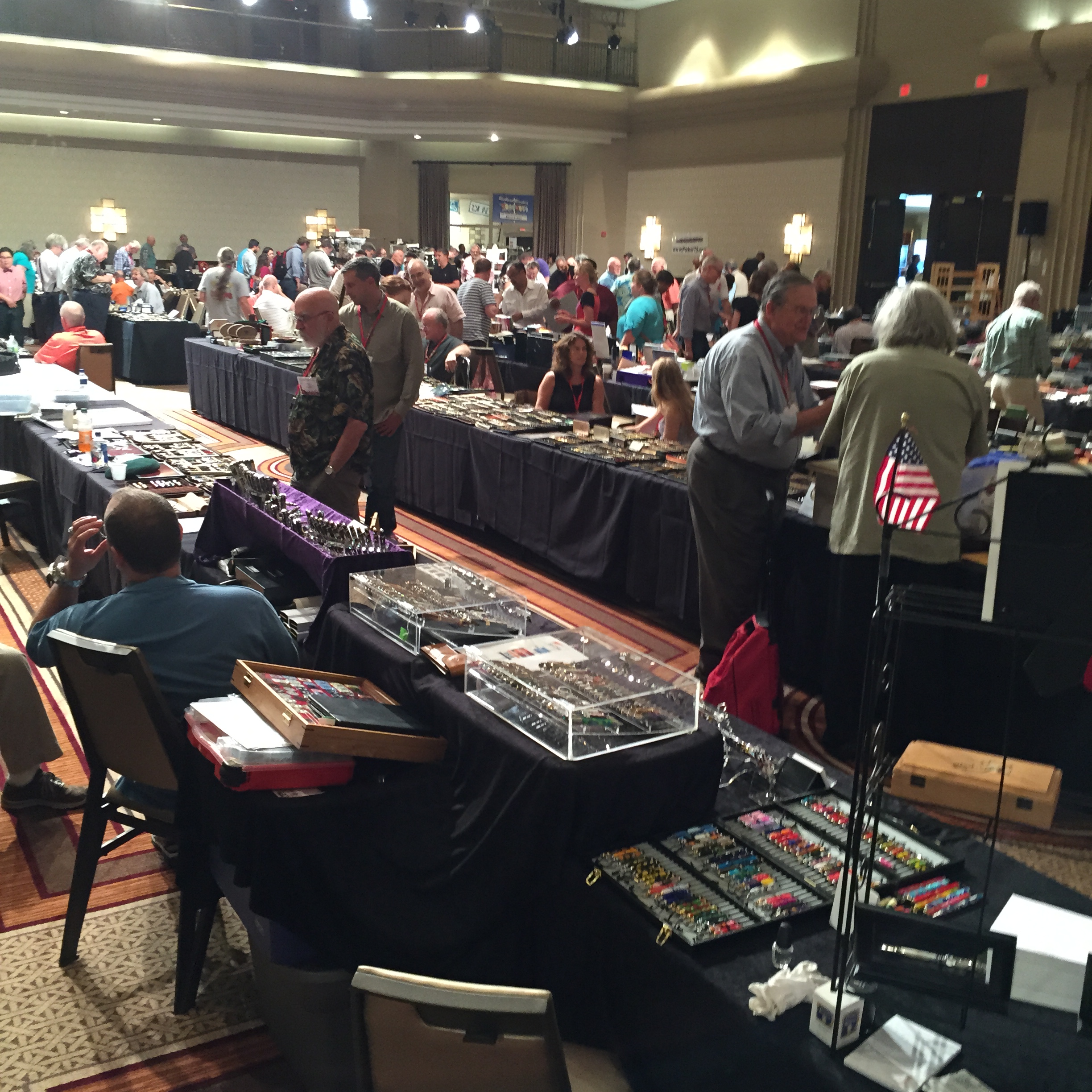 The Grand Ballroom during a slow period.

Monday morning arrived far too early for my tastes. (I work in the tech industry…we don’t do early mornings.) Dad had to take a cab to the train station, then an early train from DC to Philly where the high rise construction project he is managing is located. He’d stay in Philly for the week, then return home to Utah on Friday. The night before, he inked up all his new pens and had his new Rhodia paper with him, so he was all set. We had breakfast in the hotel restaurant, said our goodbyes, and he took off.

My flight back to Seattle wasn’t scheduled to depart until 6:45PM, so I had some sightseeing plans to fill up my day before heading home. I finished packing up my stuff, showered, took my luggage to the rental car, then checked out. I left the car in the hotel parking lot, then walked over to the Metro station. After a bit of struggle figuring out how to buy my passes (Seriously…their metro instructions are TERRIBLE!) I found myself downtown in DC. My destination: The International Spy Museum.

The weather for my trip to DC had been pretty spectacular up to that point: low-to-mid-80s, and low humidity almost every day. That Monday, by the time I walked the four blocks from the train station to the museum, I was drenched in sweat. (Not, I should add, a state I wanted to experience prior to boarding a plane for a six-hour flight with nary a chance to shower beforehand.) The weather that day ended up reaching the upper 90s with 90% humidity, and as a thin-blooded Pacific Northwesterner, I was not able to handle it.

The International Spy Museum was…okay. There was certainly some interesting things in the museum, but I was able to make it through the entire place in less than two hours. It certainly was not worth the $23 cost of admission, especially when the National Portrait Gallery was right across the street and had free admission. If I had to do it over again, I would have done that instead.

By the time I was through the Spy Museum, it was time to stick a fork in me, because I was DONE. My feet hurt, my back was killing me, and I was so mentally tired I started to feel like Charley in the second half of Flowers for Algernon. Rather than meander through the fetid tropical swamp weather of a DC August, I decided to head to the airport. Yes, I would get there six hours before my flight, but I could get through security, find a bar somewhere in a quiet corner of the airport, get some food, some drinks, maybe write some letters with my new pens, read, and do some people watching. (Side note: I just love hanging out in airports. If it weren’t for the TSA, I would go to the airport just to hang out and work. Airports:Matt::Coffee Shops:Aspiring Writers.) It was going to be a perfect, relaxing way to end my time in DC.

By 12:30, the rental car was returned and the shuttle had dropped me off at the airport. I found the Alaska Airlines ticket desk to check my bags, and was horrified to discover that Alaska only had one flight leaving from Dulles each day at 6:45 PM, and that the ticket counter wouldn’t open until 3PM. This meant that, for the next two and a half hours, had to sit in the ticketing area of the airport. I couldn’t go through security. I couldn’t find a bar. I couldn’t get a drink or some food. I was stuck. (In fact, Matt was so displeased he began talking about himself in the third person.)

I found a quiet corner in the area behind the ticketing counters, and did a 20-minute Periscope while I waited. Then I did some studying for a job interview I was going to have the day after I got home from DC. (I didn’t get the job, sadly.) Then, being completely exhausted, I actually stretched out on the hard tile floor and fell asleep, using my backpack as the worlds most uncomfortable pillow.

When I was younger, I always romanticized the idea of backpacking across Europe, sleeping in hospital waiting rooms, train stations, or in cheap hostels to save money. That may have been fun in my early 20s, but I’m now 37. I have recently hit a phase in my life I call the Grown-Ass Man Syndrome™ (GAMS). As I awoke from sleeping on the cold terrazzo, I was so sore I felt as though I had been hamstrung in my sleep. “Matt,” I said to myself, “you are a grown-ass man, and you’re too old to be sleeping on a tile floor.” (GAMS™ also applies to things like self-service car washes and flat-pack Ikea furniture: for example, “Matt, you’re a grown-ass man. From now on, you will buy grown-ass furniture from a real furniture store, and they are going to deliver it already assembled.”)

I hobbled my way over to the ticket counter, checked my bags, and by 3:30, I was seated at Carrabas Italian Restaurant in a very quiet corner of Terminal A, where the huge pan-oceanic planes were docked. Some yummy Chicken Parmesan, a nice drink, and a couple of hours relaxing, and I was feeling much better about my place in the world. Then, I did what I always do: I walked from one end of the airport to the other. (You should see the pedometer on my iPhone for my time at the DC Show. It was more than double my usual step count every day of the show, and more than triple on my airport days.)

I eventually made it to my gate only to discover the flight had been delayed by 30 minutes, so I got myself some frozen yogurt, made a quick visit to the Montblanc boutique in the terminal to see if they had any Blue Hour ink (they didn’t–in fact, they didn’t even know what I was talking about), and returned to the gate to get on my plane.

To my surprise and delight, when I had checked in the previous night, I discovered I had received a free upgrade to first class. It was my first time ever flying something other than economy coach. I could see myself using Grown-Ass Man Syndrome™ as an excuse to spend the extra money for a first class ticket in the future. Holy cow, flying first class is a COMPLETELY different experience than flying coach. I actually enjoy being stuck on a giant tube of recycled farts for six hours when it’s like that.

And, at last, I was home. I picked up Luke the Dog™, botched the interview for my dream job the next day, and returned to my regular, boring life and a massive pile of pens that needed photographing and reviewing for Season 3.

The 2015 DC Pen Supershow was my first-ever pen show. Many people expressed surprise that I had opted to attend this pen show as my first. “Start smaller,” some had suggested, thinking I should work my way up to the big daddy of all pen shows. Having gone through it, I can honestly say that I wouldn’t have had it any other way. Don’t get me wrong: the DC Show was a lot. There was a lot to do. There were a lot of people to meet. There were a lot of booths to visit, and a lot of money to be spent. But it gave me a sense of scope about the hobby that I don’t think I had really grasped before.

I’m not sure that I’m any more qualified to give advice to first time pen show attendees now than I was before I went. But a few things that I learned (or verified for myself) stand out:

WARNING: NOW IS THE POINT IN THE BLOG POST WHEN I GET REALLY SAPPY.

Attending my very first pen show in Washington DC was, without question, the highlight of my short time in the fountain pen hobby. Far too often I become hyper-focused on the acquisition of new pens and inks, I forget to stop and take a look at the bigger picture. Pens are a tool of communication. You can have as many high-end, fancy pens and as much discontinued, limited edition ink as you could fit in your house, but if you’re not using your pens and your ink to communicate with others, what’s the point of acquiring them?

The DC Supershow was a potent reminder that the best way to enjoy any hobby is to share it with others. Not in the one-way, broadcast-style “sharing” that I have done up to this point, but in a face-to-face, bidirectional way. All of the concerns I had about being around so many people, not being comfortable with strangers, and feeling overwhelmed by the press of the crowd simply disappeared the moment I sat down at the bar on Thursday night and met the gathered pen bloggers. It happened when I met Paul Joynes of Gorgeous.ink or Joe from Gentleman Stationer or Michael from Inkdependence. Or when Leigh Reyes graciously allowed me to lay hands on her precious stash of Nakayas. Or every time I chatted with Lori Todd from Franklin-Christoph, or with Brian and Andrea Gray from Edison Pen Company, or talked shop with the Goulets. When Chris Manning of Silver Hand Studios lent me one of his beautiful overlay pens to review, or Brad and Jeff of Nock Co., passed along one of their beautifully-made cases, or I met up with Pen Pals like Andres, or Paul, or Ken, I was reminded of how wonderful this community can be.

There were many wonderful people I met at the show who I didn’t mention in this wrap-up. In order to do so, I would have to quadruple the length of this already epic epistle. I can, without hyperbole, say that the DC Show was one of my favorite travel experiences in a long, long time. For a single guy who lives alone and doesn’t have a lot of in-person friends, attending a show like DC is more than just chatting about pens: it’s about connecting with people. And the timing couldn’t have been more perfect. I walked away from the show feeling more energized and excited about this wonderful hobby than I have been in over a year and a half. I have already purchased my plane ticket to the LA Pen Show in February, and I have every intention of being back to the DC Show in 2016.

A huge thank you to everyone I met and got to know a little better, and to all of you who have made this last two and a half years of playing with fountain pens so wonderful. I’m working feverishly on Season 3 right now, and it should start up in the next 5-6 weeks.