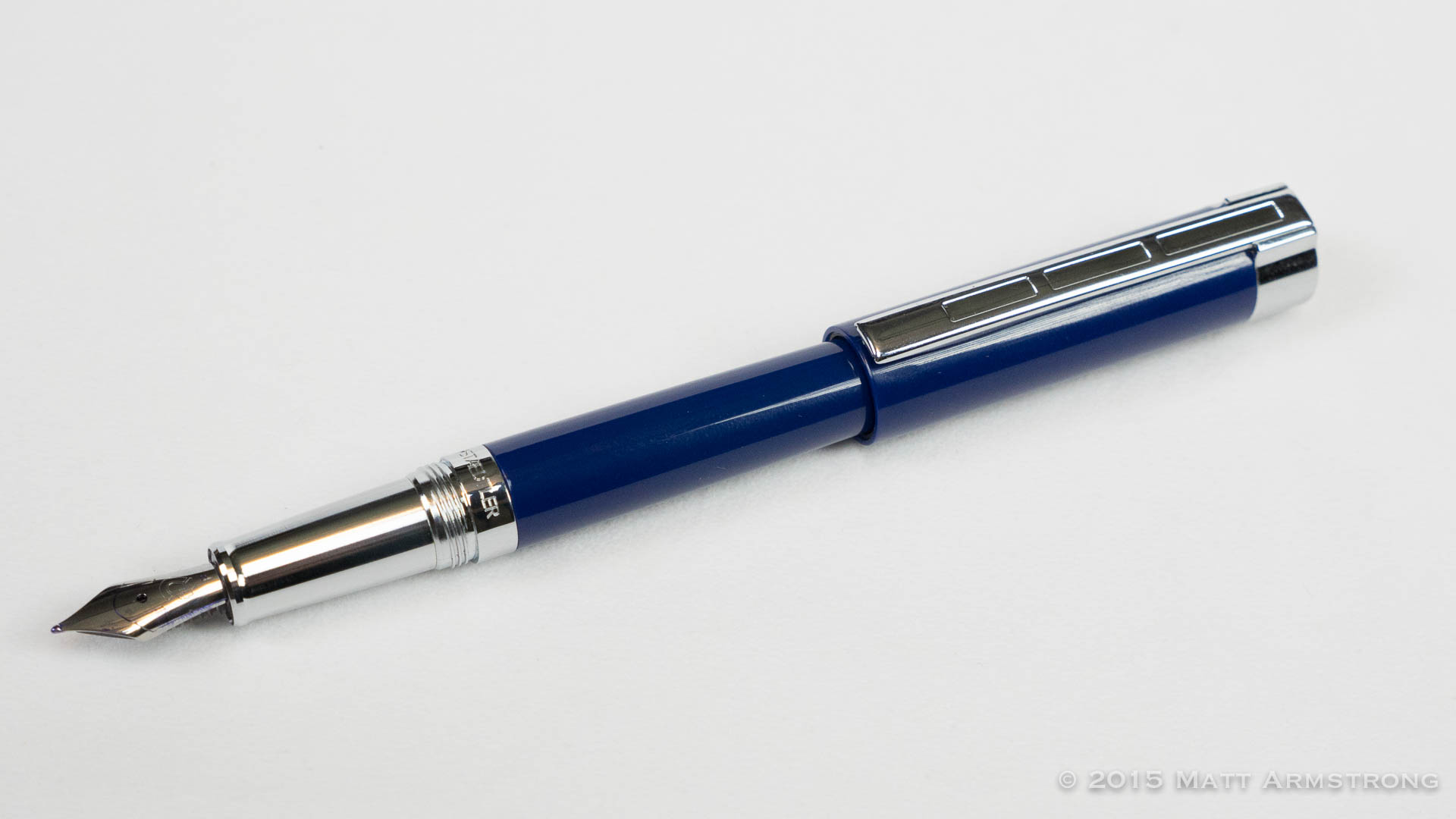 Disclaimer: The pen for this review (and the subsequent giveaway) was provided by Staedtler in exchange for an honest review. No additional compensation was provided.

It takes a lot of guts to enter the mass-produced fountain pen market these days. It’s a rather esoteric market, and fountain pen users are a particular, vocal, and sometimes fickle lot. We knows what we likes, and we likes what we knows. So, when it comes to a new entrant in the market, most serious fountain pen users tend to tread cautiously. Or, if it’s something really cool or unusual, go completely ape-poopy over it. And if the rollout is handled poorly, the resulting backlash can be fatal to the brand’s future performance. (See recent relaunch of the Esterbrook brand.) It can be a particularly unforgiving market to enter, and the barriers to entry can be pretty high.

Overcoming these barriers to entry is not a job for the faint-of-heart, and is why we don’t often see new brands. Staedtler is a well-known, well-established, and generally well-liked German company, with a long and illustrious history of instruments and tools for writing, modeling, crafting, art, and technical drawing. Their new current offering of fountain pens, which were unveiled at the 2014 DC Pen Show, are broken down into two lines: the Initium line (the “production” line of pens) and the J.S. Staedtler line, which features higher-end pens, special editions, and limited editions. (This is similar to the differentiation between Faber-Castell pens and Graf von Faber-Castell pens, for instance). 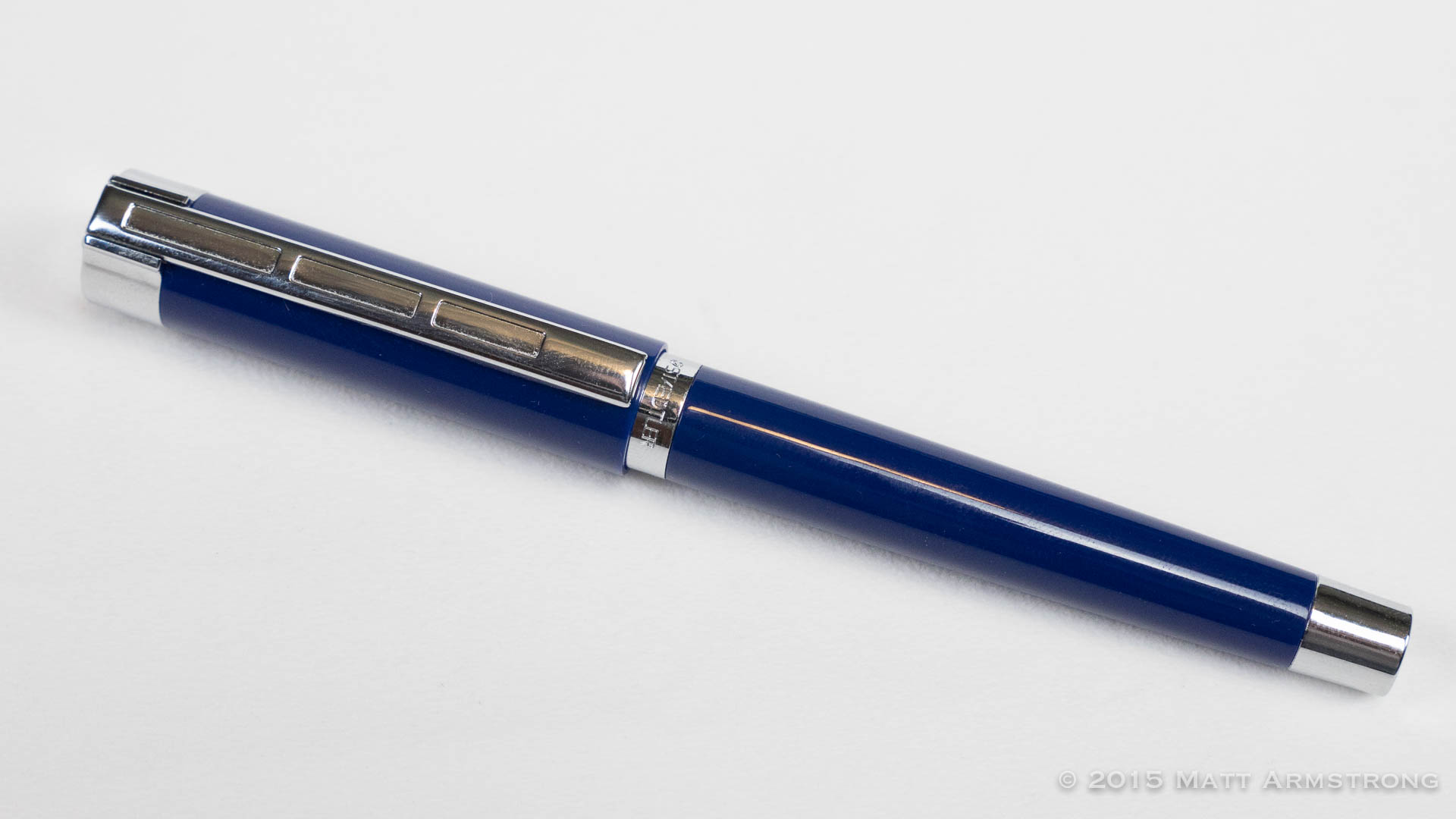 The Initium line features three basic versions: the Resina (resin in black, blue, or white), the Lignum (maple or plum wood), and the newest addition, the Metallum (raw anodized aluminum.) When Staedtler reached out to me about reviewing their pens, I opted for the Resina, which is the least expensive of the Initium versions at $169. (At the time, the price for the Resina on their website was $199.)

The Resina is an understated pen. Made of a solid, opaque blue resin, the pen features very straight lines and streamlined chrome fittings. The cap is, well, capped with a chrome finial on which the Staedtler Mars Head logo has been cast into the metal. The clip is a flat metal strap with an architectural, rectangular design stamped into the face. The clip is quite springy/bendy, and feels almost like it is hinged onto the cap (although it isn’t attached via a hinge). The cap is mostly cylindrical, without much of a noticeable taper.

The barrel has a metal band right near the cap which features the Staedtler name. To my personal frustration, they included the text “upside-down,” causing the text to only appear right side up if you store the pen nib down. It’s a minor annoyance, but one that just feels “wrong” to me compared to every other pen I’ve ever used. The rest of the barrel is in the same opaque acrylic and tapers slightly down to another metal finial with a flat top.

The cap unscrews to expose a tapered metal section and metal threads. The section is chromed and polished to a high shine, which means that it is a magnet for fingerprints. I, for the life of me, do not understand why anyone would manufacture a pen with a fingerprint-prone finish right where your grip with your fingers. That being said, I was surprised at how little I was bothered by having a metal section on the Resina. It never got slippery or uncomfortable. Also on the plus side, the section is rather longer than most pen sections (which I like a lot), and its gently tapering shape allowed me to find a hold that worked perfectly for my preferred grip.

The pen is a cartridge/converter pen, utilizing standard international cartridges and converters. It can take both the long and short cartridges. Because the section is metal, however, this is a pen that should not be used as an eyedropper.

The pen comes with a steel nib (the manufacturer of which I was unable to determine.) It’s a well-made steel nib, likely a #5-sized nib, with a the Staedtler Mars Head logo embossed on its face, and precious little other decoration. The nib design won’t win any design awards, but it is a really great writer: smooth with a hint of feedback, moderately wet, with utterly consistent performance. Being a steel nib, is it (as one might expect) quite rigid, providing practically no line variation or bounce at all. The nib isn’t flashy, but it writes well every time you put the tip to paper.

In the hand, the Resina is pretty comfortable. My qualms about the metal section aside, the pen is fairly lightweight, coming in at only 16 grams uncapped. The pen can be posted, which adds another 13 grams to the overall weight, but the pen posts so deeply that the extra weight didn’t make the pen unbearably back-heavy. I was able to use the pen for long writing sessions without any hand cramps or fatigue.

The Staedtler Initium Resina is a very solidly built pen. It has the feeling of being something of a tank, with thick walls and heavy-looking metal accents. It is clearly a writing instrument that is built to last a lifetime, and could probably even stand a bit of abuse. It looks like the kind of pen you could run over with you car without breaking it. (This, I should add, is not an experiment I have tried, nor is it one I would recommend.)

All of that being said, something about the aesthetics of the pen lacks cohesion. The pen is so solid and chunky it feels almost a little clumsy, a little lacking in grace. I don’t doubt that the design of the pen was well-considered, but the resulting writing instruments lacks any special flair, any unique attributes that make it stand out from other pens in its price range.

In terms of both construction and writing performance, the Resina can not be faulted. (And, to be fair, construction and writing consistency are perhaps the two most important features for a fine writing instrument.) When placed against a price point of $169, however, the value proposition of the Resina is a little questionable.  At $170, the Resina is in direct competition from pens such as well-known workhouse pens like the Lamy 2000 (a piston-filler), Pilot Custom 74, or Platinum 3776 (all with 14k gold nibs and more refined designs) or fancier pens such as the Visconti Rembrandt, the Faber-Castell Ambition, or the Delta The Journal (with spectacular steel nibs and very eye-catching materials.) In such company, the value of the Resina falls just a bit short of the price point for me. If the modern, streamlined design of the pen speaks to you, though, I don’t think you’d be disappointed in the slightest by adding it to your collection.