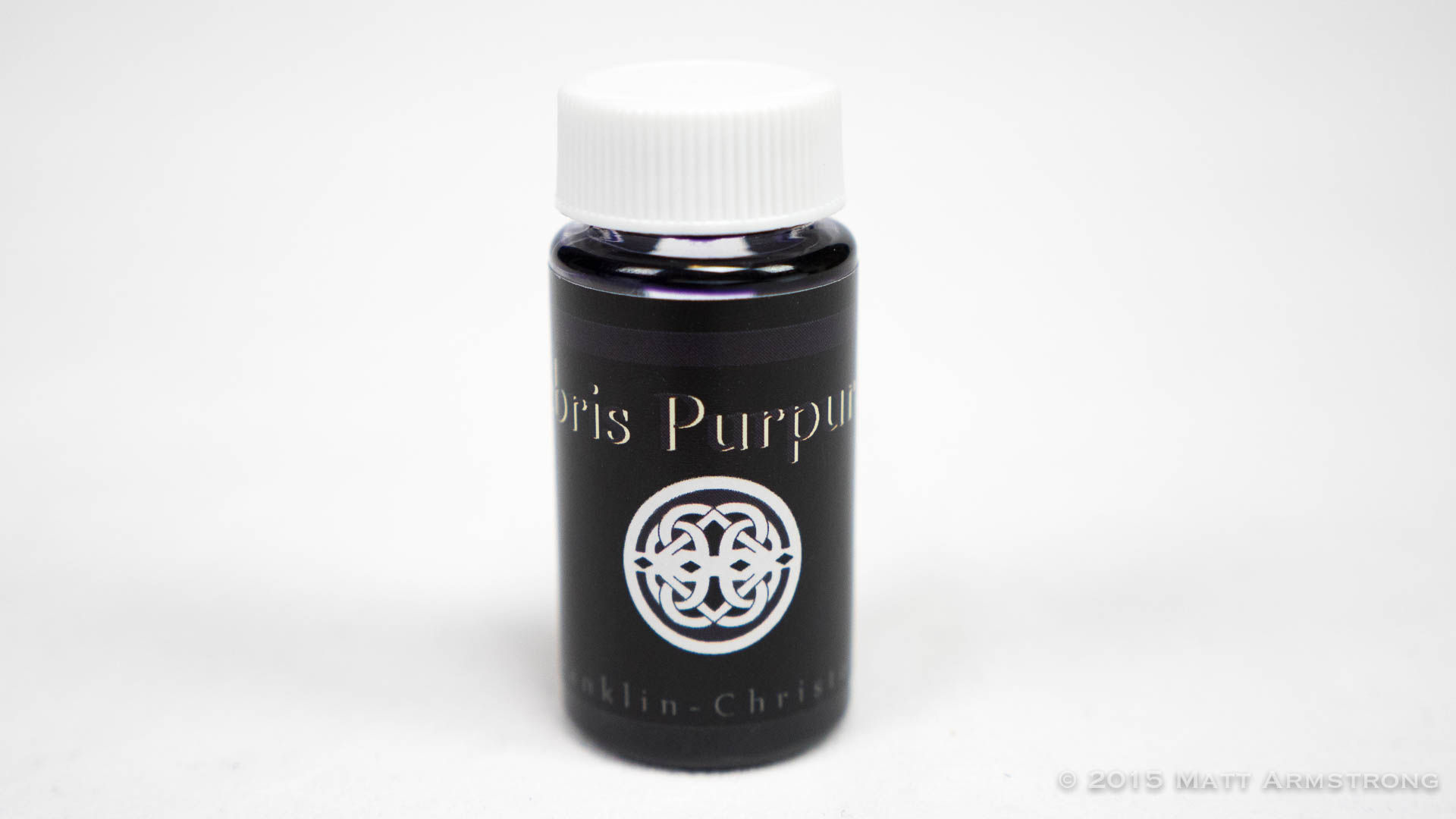 My first experience with Franklin-Christoph ink came about a year ago when I bought a bottle of their Deep Purple writing fluid. I liked the ink quite a bit, but for some reason, I rarely found myself inking up with it.  Nevertheless, I was relatively surprised when I recently learned that Franklin-Christoph had discontinued their entire line of inks (except for two) and had released an entirely new line. I first discovered this when I received samples of the eight inks that made up the new line after I had placed an order for a couple of new nibs and a notebook. Then, at the DC Show, I was fortunate enough to receive sample bottles of the four newest inks in their collection: Terra Firma, Loden, Black Cherry, and dating sites older adults. (For those keeping that, that brings the total number of inks in the Franklin-Christoph line to 12.)

Tenebris Purpuratum is the only true purple ink in Franklin-Christoph’s newest line. The name is Latin and most of the different ways which I have heard it translated result in one several different meanings which all equate to “dark purple.”  (I can say with a fairly clear conscience, that I’ve never studied Latin and have no desire to do so.) It is, like most of the inks in Franklin-Christoph’s new line, a dark color. As a purple, it falls somewhere on the spectrum between the reddish purple of, say, dating sites to meet asian singles or Montblanc Lavender Purple and the far more blue-tinted Noodler’s Violet. It also floats in a weird in-between realm of a deeply saturated ink and a “dustier” ink like Diamine Damson. 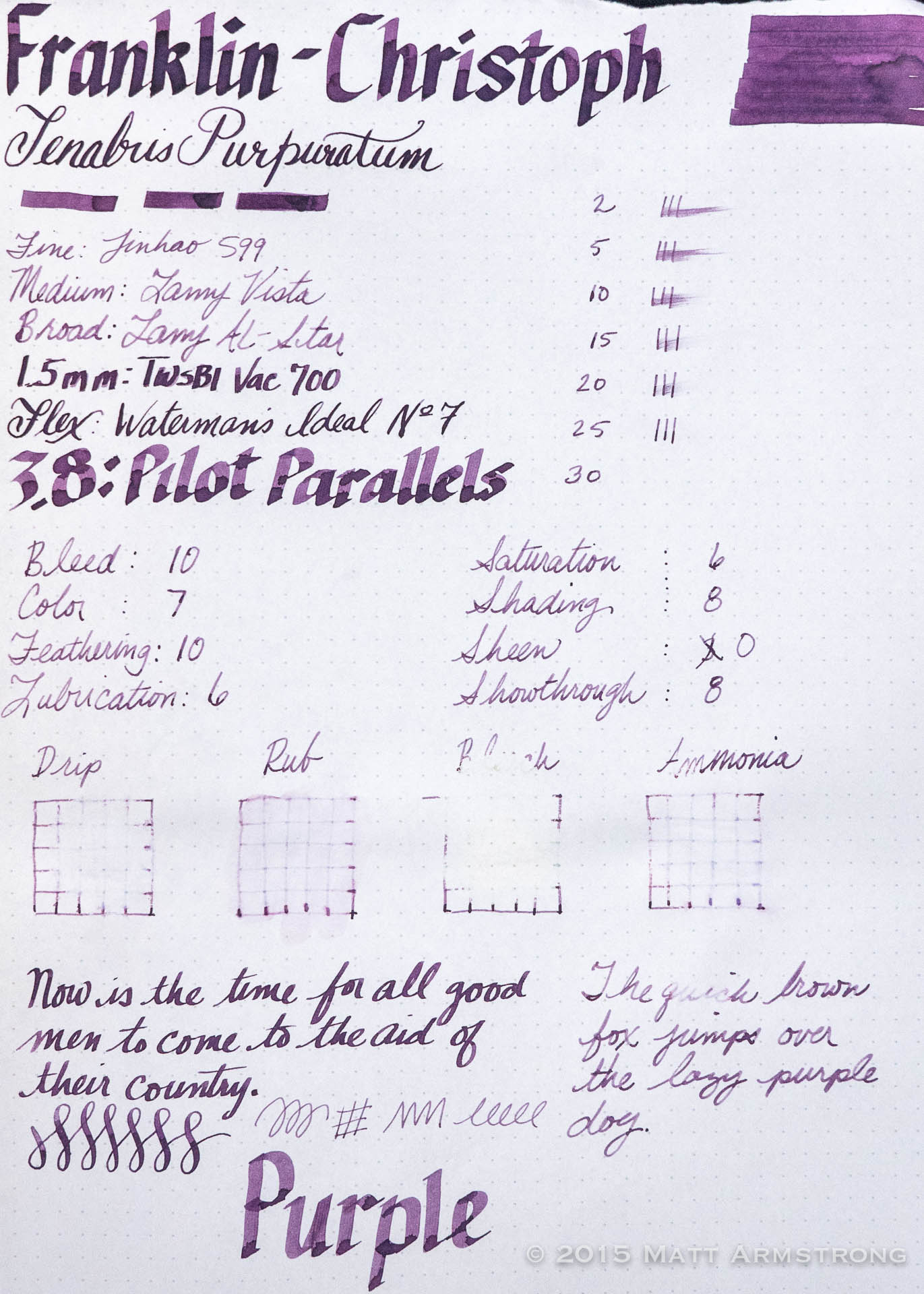 As you can see from the photo above, dating sites older adults is a moderately saturated, highly shading ink. It dries with a mostly matte finish, and doesn’t exhibit any real sheen that I can detect. On finer or drier nibs, the ink adopts more of that dusty purple color with a bit of a blue undertone, while or wetter or wider nibs, tend to show off a much richer royal purple, with a bit more of the ink’s red undertones becoming visible. 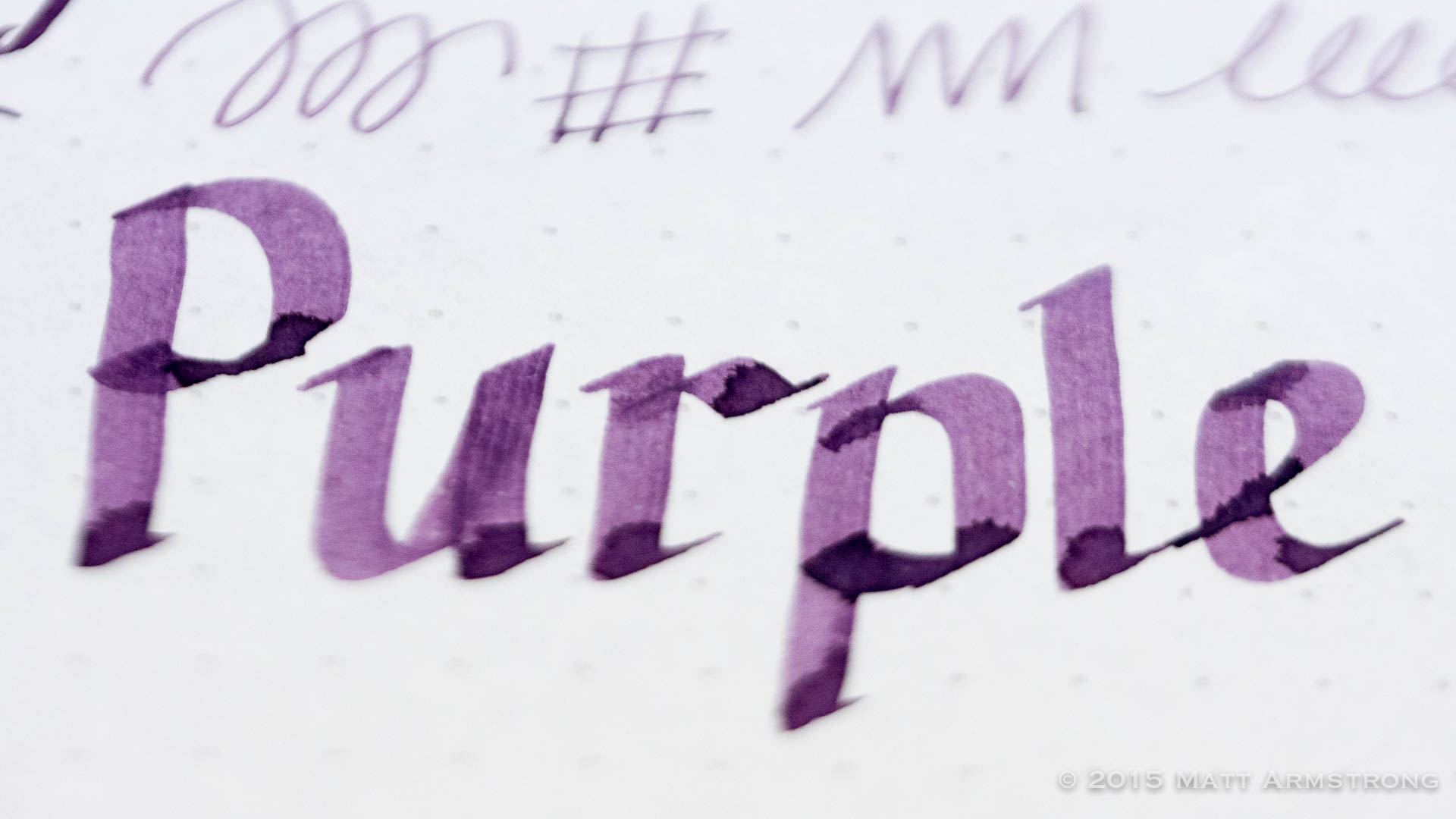 I ran my tests on Rhodia and Tomoe River paper. On the Rhodia paper, the ink behaves pretty well, and shows a bit deeper saturation. Dry times are a little on the slow side, but not outside of the realm of usability. I didn’t experience any feathering or bleedthrough except on the very wettest of writing. It behaved admirably across the board.

On Tomoe River paper, the ink was a little less impressive for me. 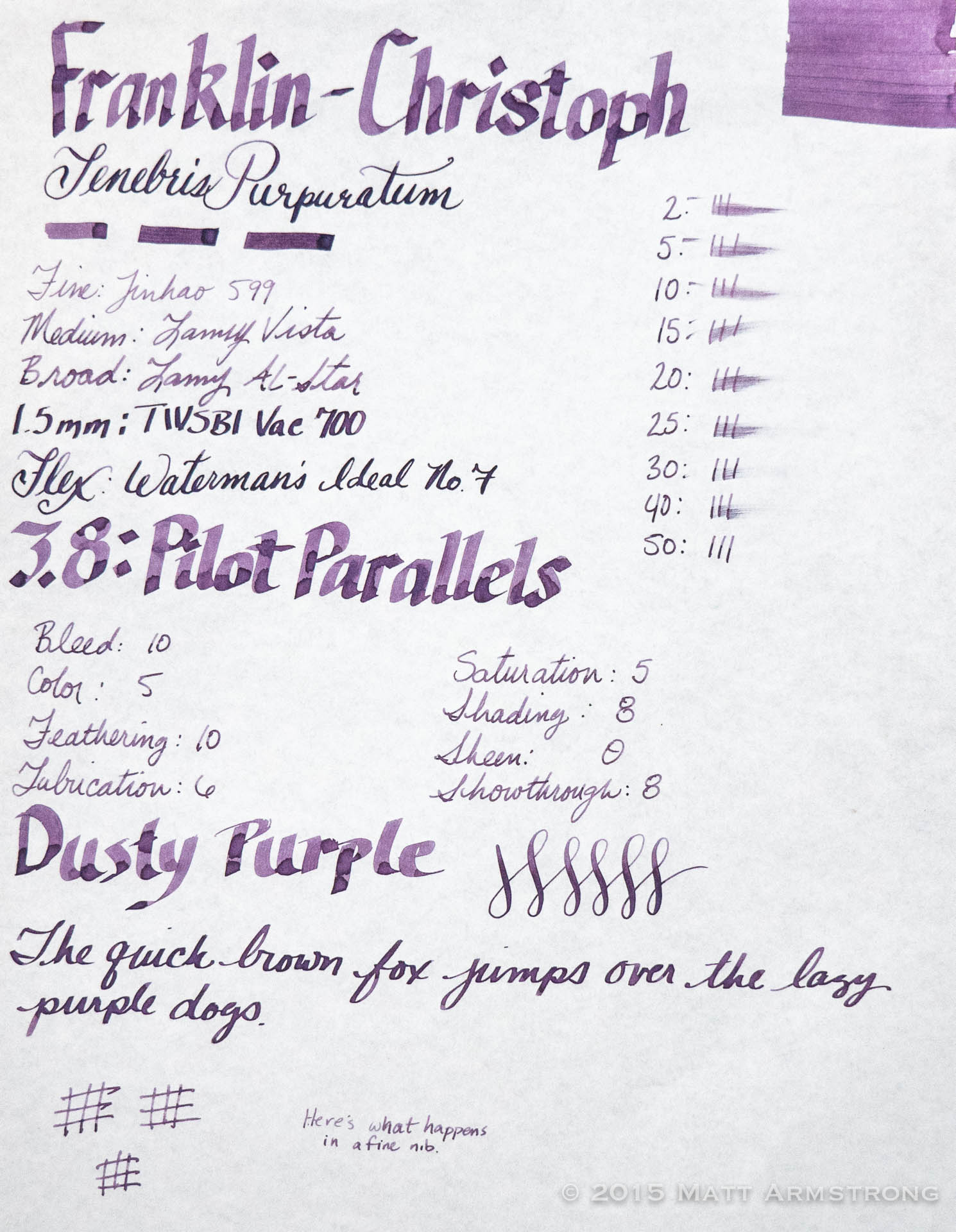 Something about the Tomoe River paper seems to sap the ink of its deep saturation in wet spots. You still see quite a bit of shading, but I find the overall effect to be a bit faded-looking. Also, on Tomoe River paper, dry times were a bit excessive at 50 seconds.

A quick test of low-quality Staples copy paper (not pictured–see the video) showed that dating sites older adults actually behaves quite admirably if you can’t use premium papers. On Fine through Broad, there was no real feathering and only the merest hints of bleed through. On the wetter nibs, as one would suspect, feathering does get a bit worse, although not as bad as I was expecting. Bleedthrough does become a bit of a problem, though. 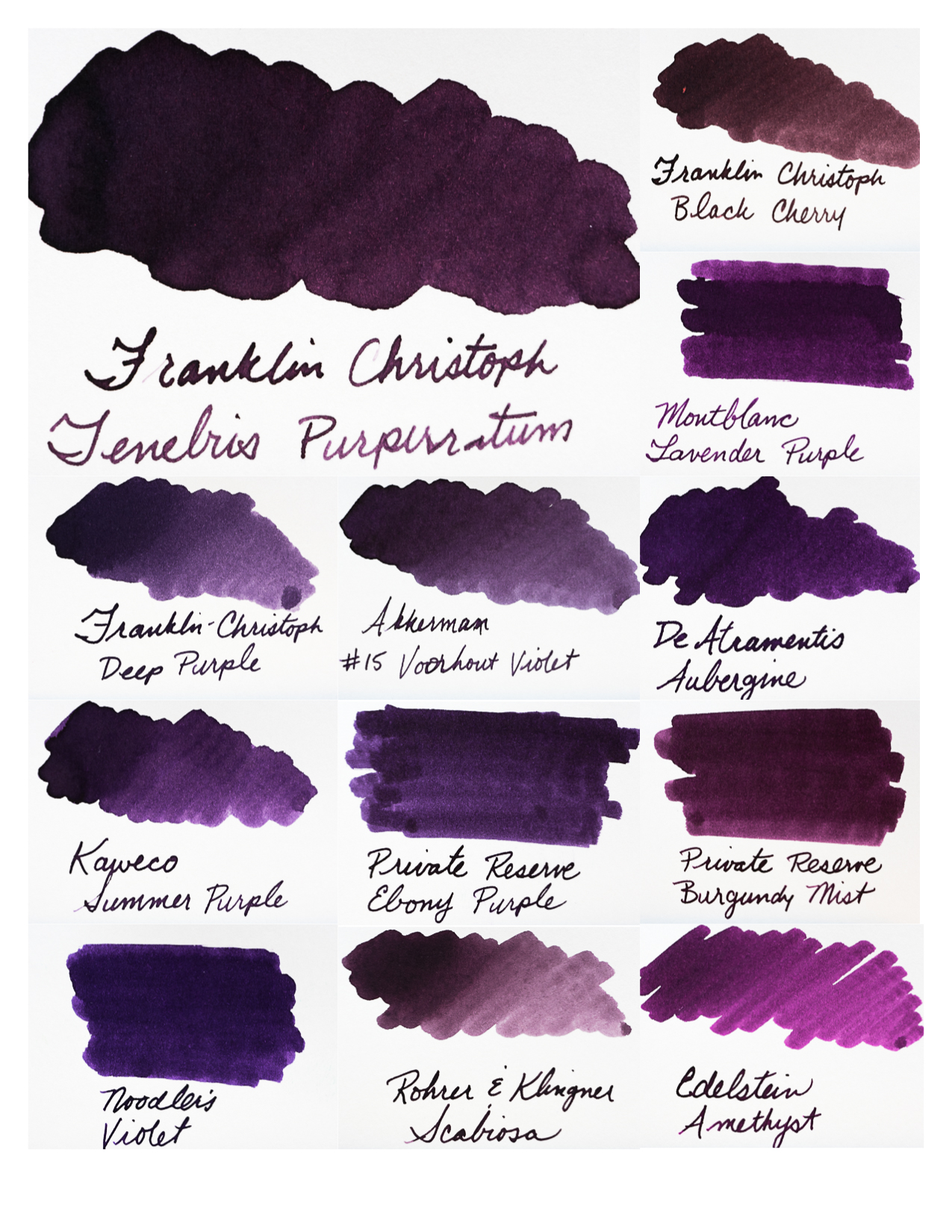 In terms of the writing experience, I found the ink’s flow to be consistent, albeit just a hint on the dry side. I also didn’t find the ink to be highly-lubricated, nor did I find it unlubricated. Instead it fell somewhere in the middle. 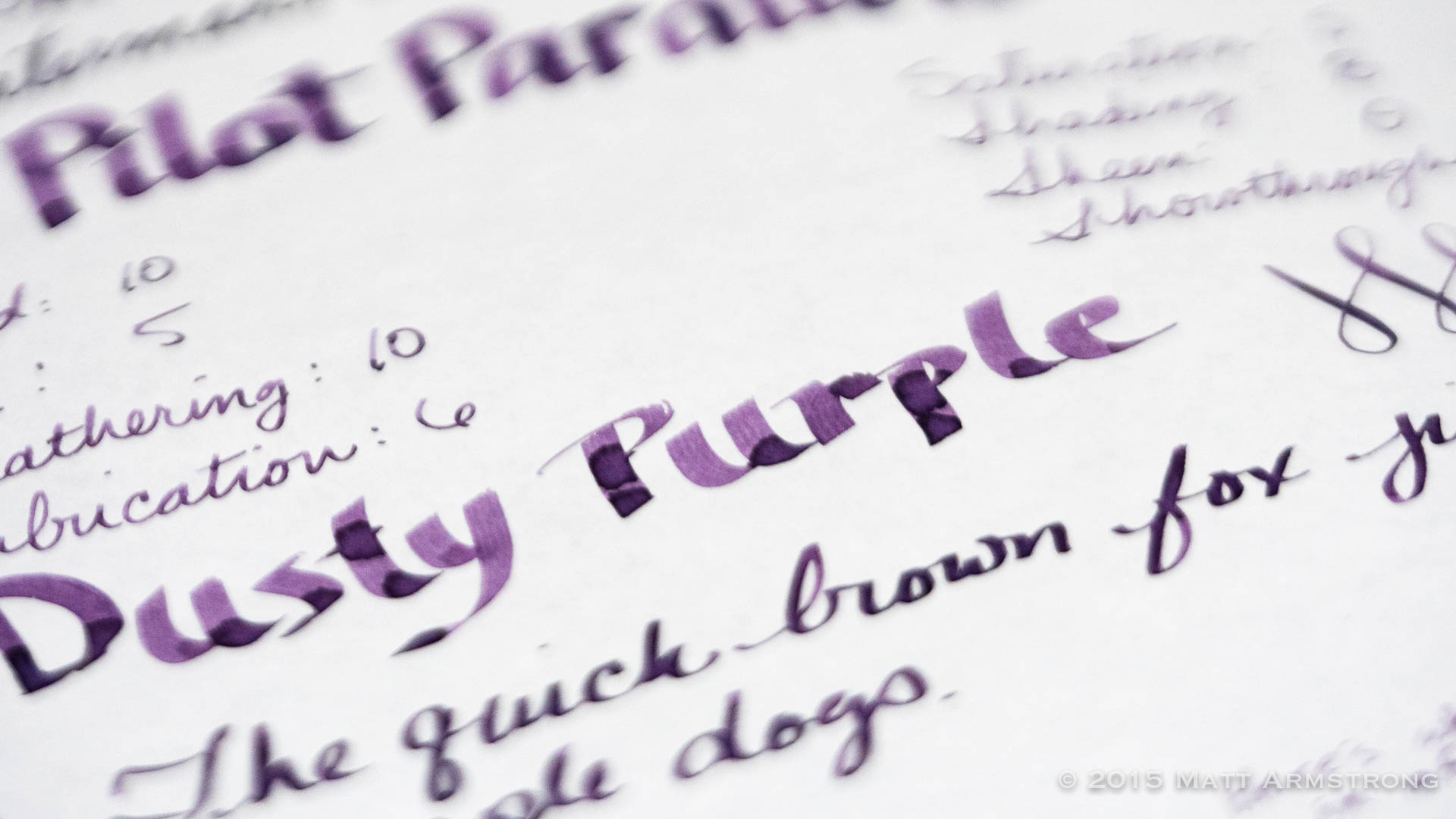 Tenebris Purpuratum doesn’t exhibit much in the way of waterfastness. It washes almost completely away in the drip tests and becomes a bit of a mess on the water rub test. Bleach all but obliterates any sign of the ink, but ammonia does leave behind a bit of grey.  With a lack of waterfastness, it’s not a surprise that this ink washes out of pens pretty easily. I didn’t experience any issues with staining or stubbornness with the cleanout process.

Overall, I find Franklin-Christoph Tenebris Purpuratum to be a nice, well-behaved purple ink. It may not replace my favorite purple inks, but I find Tenebris Purpuratum (my spellcheck is hating me with that name right about now…) to be a solid step up from the discontinued Deep Purple. Especially for folks who don’t care for sheen or who want a nicely shading purple color that is right in the middle of Aubergine and Violet, this ink may be just what you’re looking for.