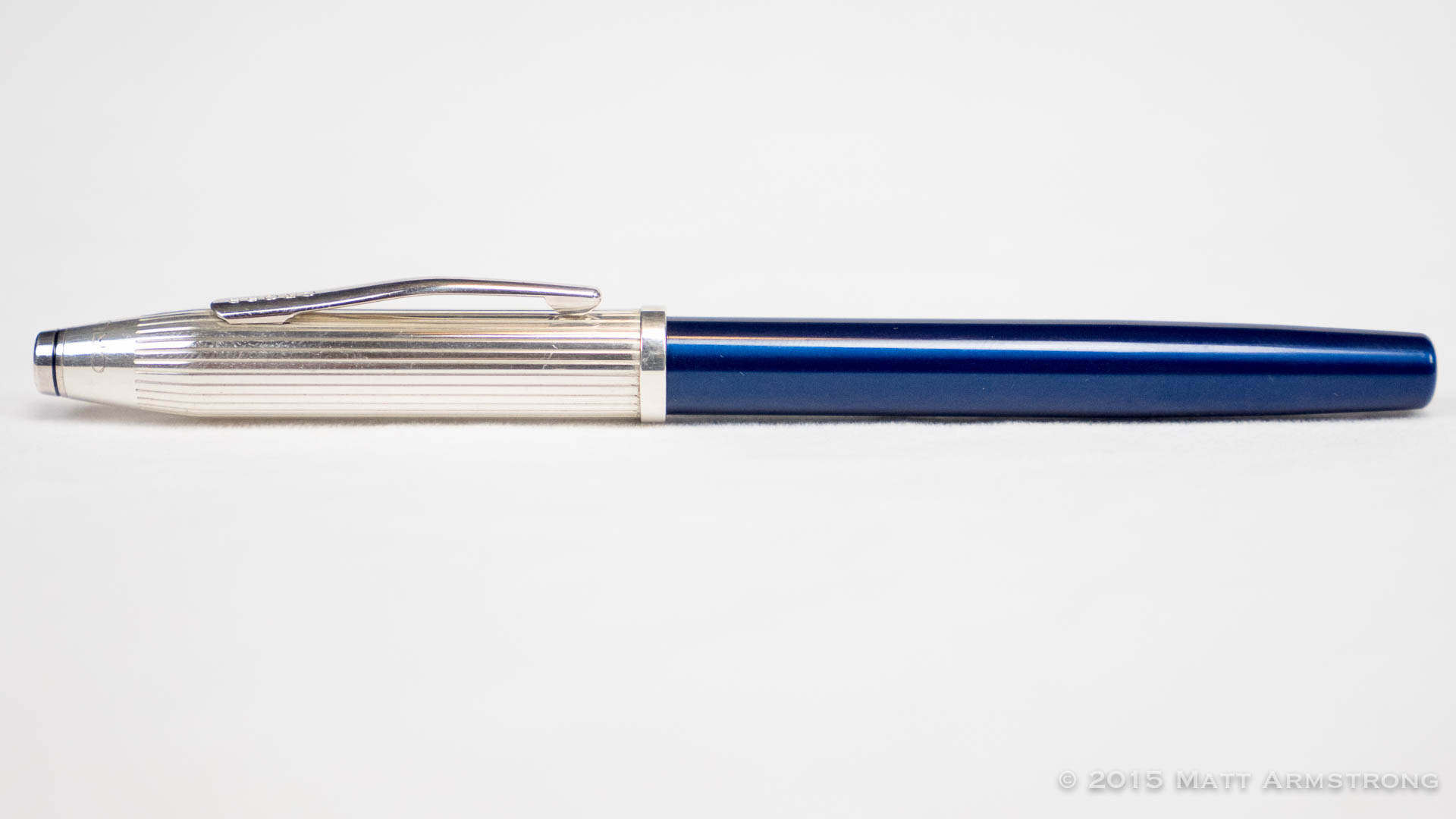 DISCLAIMER: The pen for this review was provided by Goldspot Pens in exchange for an honest review. No additional compensation was provided. All opinions expressed are my own.

I have had, perhaps unfairly, an unfavorable opinion of Cross fountain pens from pretty much the moment I started using fountain pens. Cross pens were the cheap, ugly pens sold in clear plastic blister packs on the pathetic “fine writing instruments” shelf at Staples or Office Max. Even when I was in my “BUY ALL THE PENS!!!” phase of my habit, the Cross pens to which I had access never held any appeal to me. Cross pens almost never get talked about in serious fountain pen circles online, and when they are it is with a fair bit of indifference.  So, until now, I have never tried a Cross pen, let alone done a review of one.

The AT Cross company has been around for many decades, and has a history of pens made from metal. They have been the provider of the U.S. Presidential fountain pens used for the signing of official documents, and are one of the last large-scale fountain pen manufacturers still in the United States.

The Cross Century II is my first foray into the brand. It was clear from the get-go that the Century II was a pretty hefty step up from the $30 wastebasket fodder I found from Cross at my local office supply store. I picked the aids dating site for this review. (It was brought to my attention, however, that this particular model may have been recently discontinued as it has been removed from the 2016 catalog. Other models of the Century II are still available.) Aside from the Blue/Sterling version, the Century II comes in a variety of different colors and finishes, including chrome, all blue, 10k gold plated, and several graphical “botanical” painted/printed finishes. The pen comes at different price points depending on the finish–anywhere from about $60 to over $300. The Blue & Sterling Silver model is priced at around $145 USD.

The cap on my Century II is made of Sterling Silver and features a flat-topped profile and machined vertical lines that run around the entirety of the cap. The flat top has a small enameled black dot in the center and a black enameled line that helps to give the illusion that the cap has a finial. The interior of the cap uses a white plastic cap liner. The clip is relatively sturdy and feels as though it will do the job of securing the pen in the pocket fairly well. Unfortunately, it is attached to the side of the cap with a few little prongs and feels as though it could be popped off the cap entirely if enough force were applied. The cap is attractive, but something of a fingerprint magnet. It is also, being Sterling Silver, a bit prone to tarnishing.

The body of the pen is also made of metal: brass with a rich, royal blue lacquer. The barrel swells slightly in the middle and then tapers again to a flat barrel end with slightly rounded shoulders. 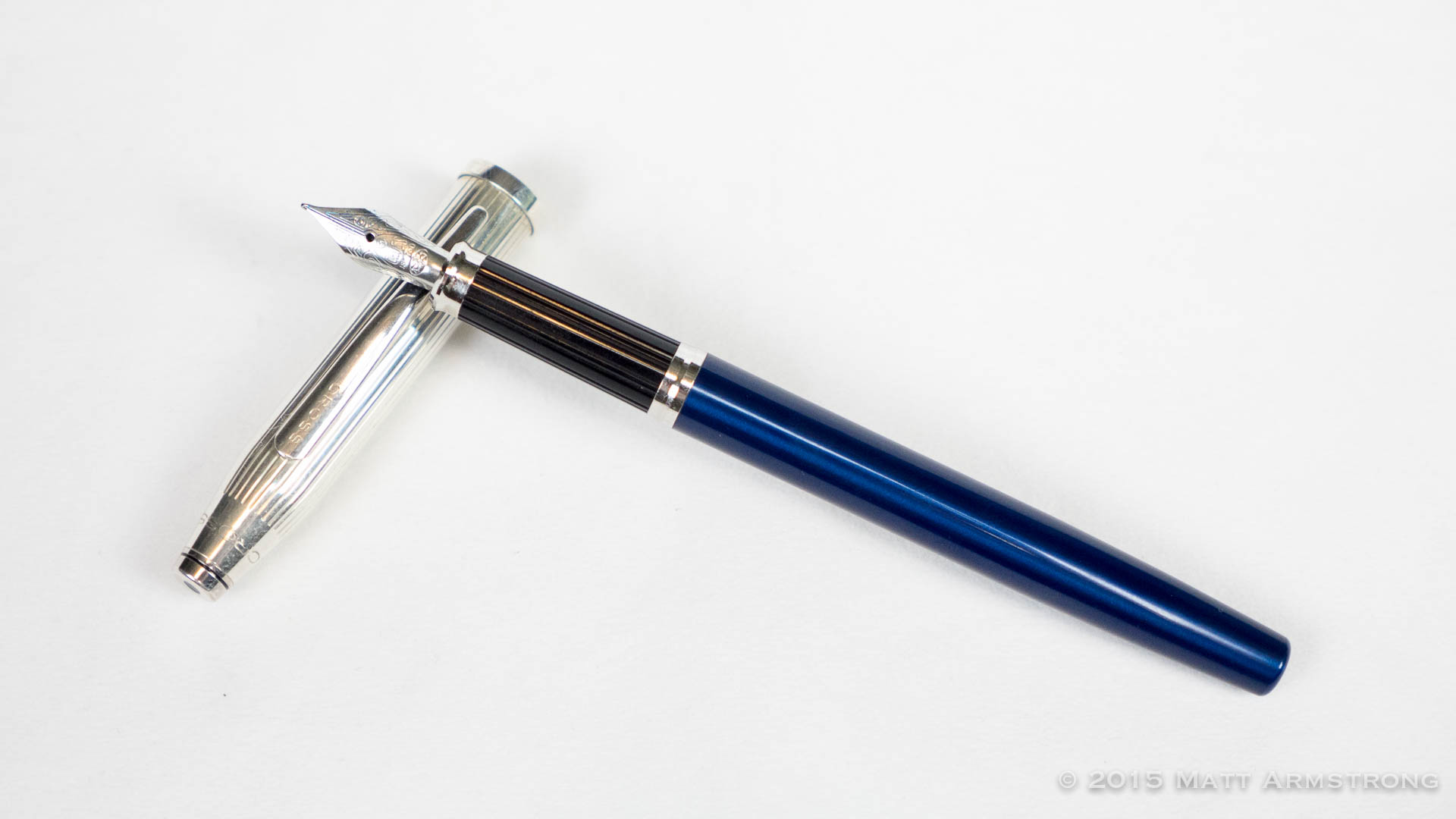 The cap is of the pull-off variety, and removes to reveal a black lacquered grip section. The section is vertically grooved, like the cap, which prevents the grip from becoming too slippery. As there are no threads on the body of the pen, the transition from section to barrel has only a minor, silver-plated step down. 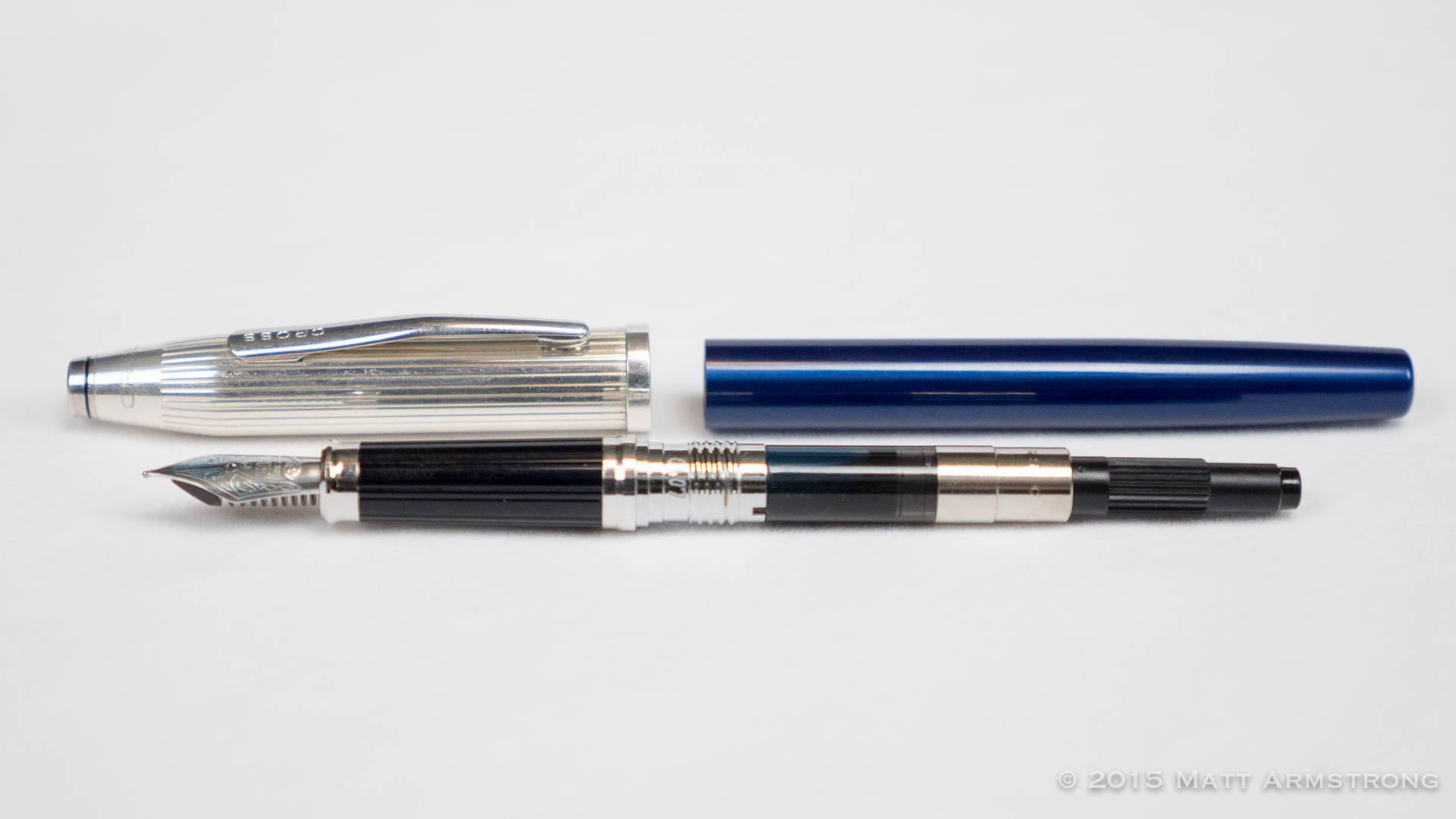 Cross utilized their own proprietary converter/cartridge system that is quite different from other offerings in the market. It is mildly frustrating, especially as Cross cartridges and converters are not as readily available as some other brands, but at least the converters work pretty well. The pen comes with a converter and two cartridges.

In terms of construction, the pen feels mostly well-built. The metal construction gives the pen a bit of heft and the threads between section and barrel are well-machined. The only time when the pen’s construction feels a bit flimsy is when the pen is capped. When closed, the cap feels a little loose and tends to wiggle about just a bit. If this pen were in my shirt or jacket pocket, I might be worried it would come un-capped in my pocket. I don’t personally carry around pens in my pocket, so I can’t say if that’s a well-founded fear or not. I will say that I have never had any issue with the cap coming off…it just feels like it could.

One other aspect of this pen that I struggle with is the pen’s girth…or lack thereof. This is a very narrow pen—more narrow, in fact, than almost any other pen in my collection. A year ago, that would have had me hating this pen right out of the gate. I don’t know whether my grip is becoming more flexible as I get more experienced with fountain pens, but while the slenderness of the pen does bother me somewhat, I don’t find it to be a deal breaker as I have with other slender pens. I do find myself gripping the pen more tightly than I do my chunkier pens, and the more slender diameter does seem to make my hand cramp up a bit faster. If you’re the kind of person who prefers a slim grip, however, I think you’ll find the section nice to hold and the feel in the hand to be quite balanced. 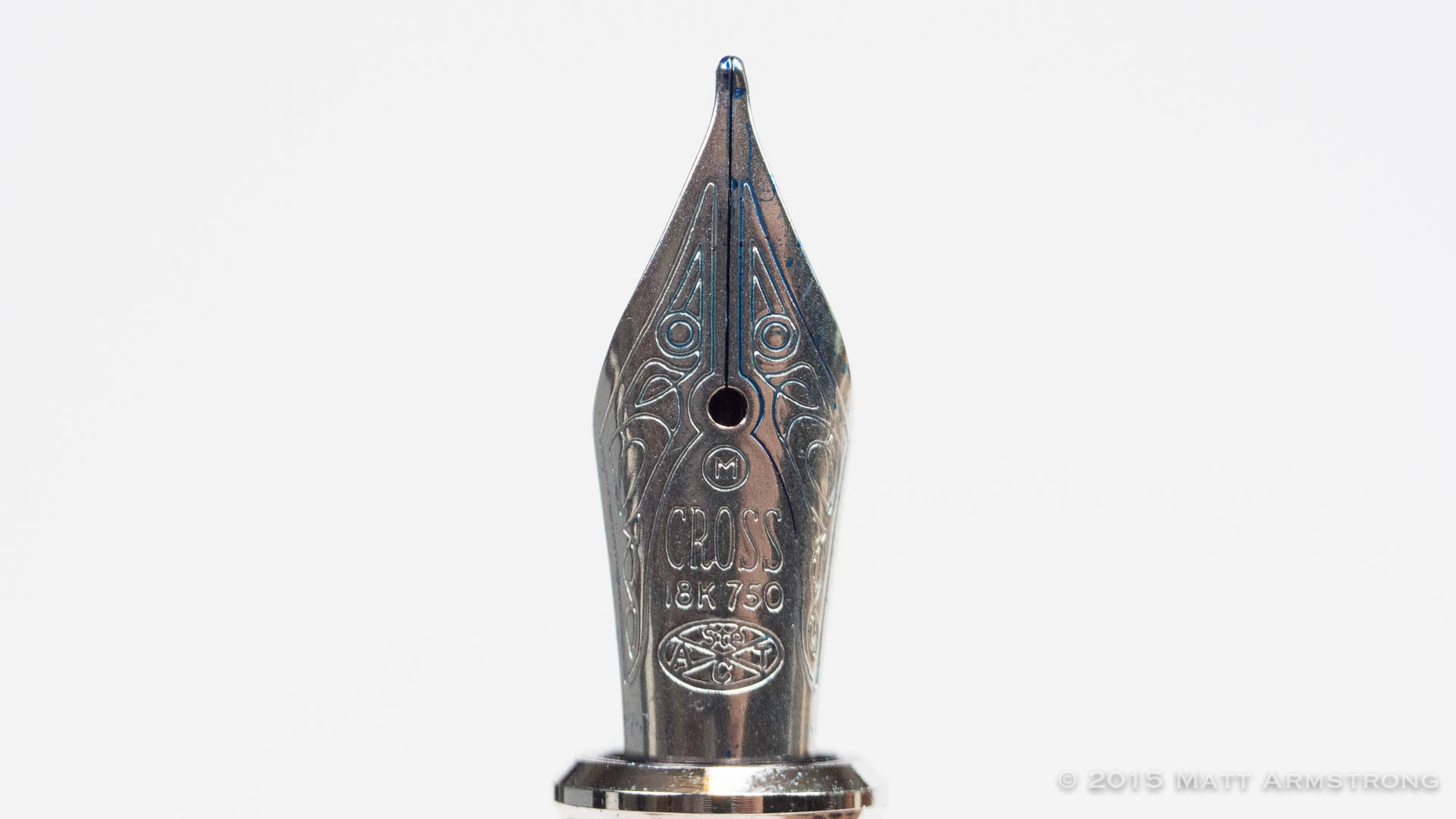 The pen features a small, yet ornately engraved rhodium-plated 18k gold nib in the traditional nib shape, which rests snugly against a relatively pedestrian black plastic feed.  The Century II’s nib was a surprisingly good writer: very consistent, moderately wet, and with just a hint of a bounce to it. I did, at one point, find it necessary to run the nib over a touch of Micromesh as I found its out-of-the-box feedback mildly unpleasant on super-smoother paper. Nevertheless, the tines were perfectly in alignment and the nib behaved quite admirably even on long writing sessions. I was, to be completely honest, expecting the behavior of a $35 Staples garbage pen and was pleasantly surprised that the 18k nib on this Cross Century II was quite on part with other pens in the same $150 price range.

In the end, the Cross Century II is a nice pen. I can’t say that it sings to me the way other pens have, but that is merely a matter of aesthetic taste. I am quite impressed and pleased with the way it writes. I really do like the silver and blue combination quite a bit, but I will say that the overall design of the pen feels a bit dated. And this, perhaps more than anything else about Cross pens, is what I think keeps them from being top-of-mind with a lot of fountain pen aficionados. Cross has some good things going with its production line, but it feels like there hasn’t been a major update in design since the 1980s. The longevity of some pens (like the Bauhaus-inspired design of the Lamy 2000) seems to stay current-feeling over decades. The Century II, while attractive, does feel a little bit out of its own time.

Any concerns I have about the construction of the pen are relatively minor. But the lack of innovation from Cross that I’ve seen over my past few years in the hobby makes it feel as though there’s nothing special about the brand aside from its history. It’s as if the company no longer has much of an R&D budget, so they continue to make minor changes (like different color combinations) to a 30-year-old design. This feels especially true when it comes to the Cross’ insistence of maintaining such a slim profile on most of its pens when the market has clearly shown a move toward girthier pens. It strikes me as an example of putting tradition over the desires of a large portion of the modern customer base.

And finally, value. At a price of approximately $145, the Century II Blue & Sterling falls into the same category as other offerings like the aforementioned Lamy 2000, pens from Edison and Franklin-Christoph, the Platinum 3776, or the Pilot Custom 74. In terms of writing performance, I have absolutely no hesitation ranking this pen’s off-the-shelf writing experience in the same neighborhood as any of these comparison pens. When it comes to design, though, I find the Century II falls short of the innovation of Edison or Franklin-Christoph or the timeless classic feeling of the Lamy, Pilot, or Platinum.

I still feel comfortable recommending the Century II—especially people who are looking for a slim pen. It’s well-built, and is a wonderful writer. It’s a design that isn’t for everybody, but it is a very nice writing instrument.