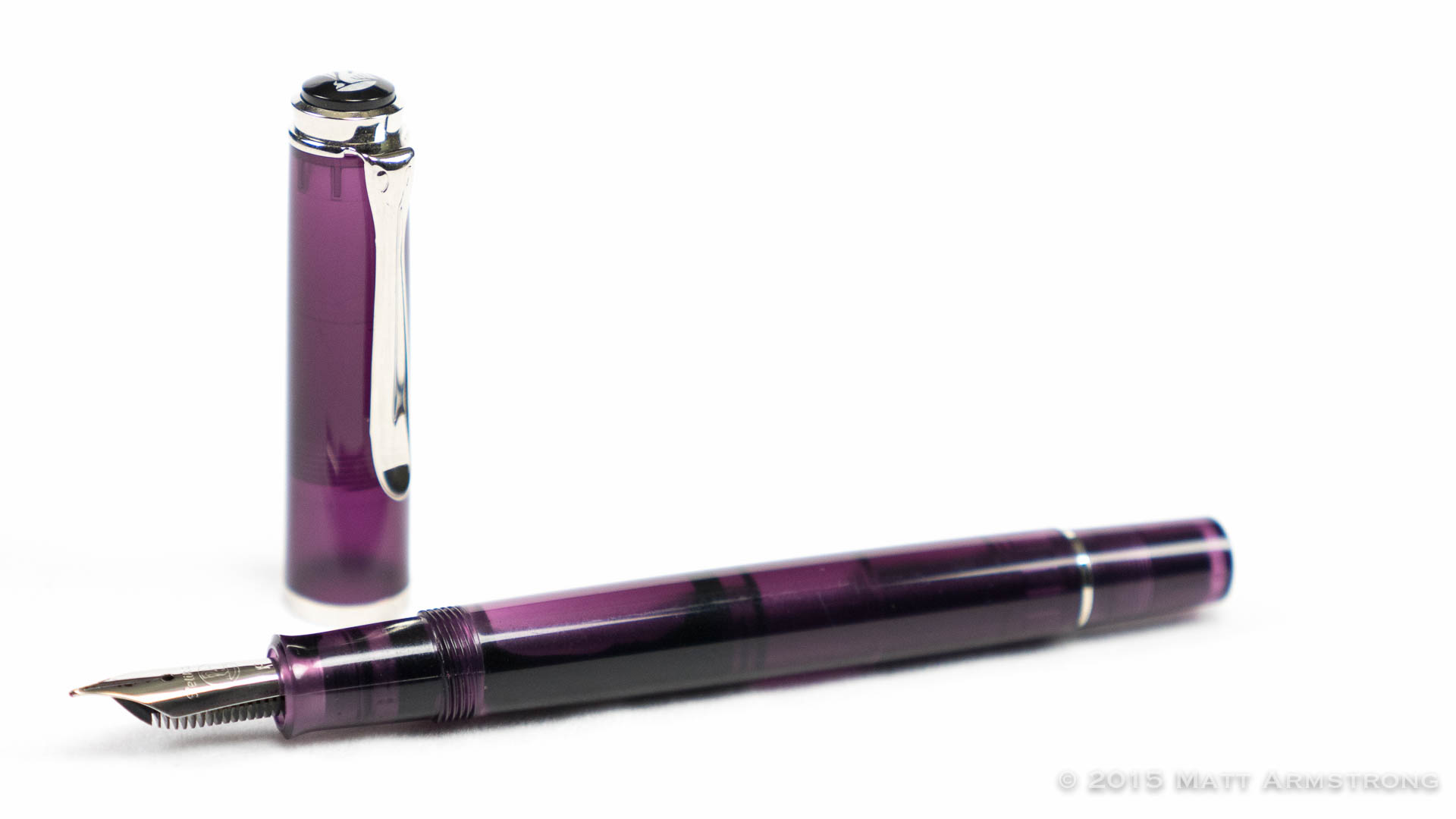 I have always had a weakness for purple. Especially rich, deep, jewel-toned royal purples. Despite my love of the color, I have very few purple pens. Purple is simply not a color that gets used often in pen construction. And when it is used in pen construction, it seems to rarely be the quite the shade of purple I’m longing for. When it was announced Pelikan’s ink and pen color of the year for 2015 would be Amethyst, I was duly excited. I grabbed the Edelstein Amethyst ink the day it came out, and found I liked it quite a bit. (I also marked the ink’s similarity to the recently re-released Montblanc Lavender Purple.)

I had already decided to acquire the accompanying Pelikan M205 Amethyst pen when it was released despite knowing ahead of time that it was likely to be “too small” for what I generally prefer from a pen. “But..PURPLE!” my mind screamed at me.

If you are familiar at all with the design of modern (or even most vintage) Pelikan pens, you could pick out the M205 as a Pelikan from across a large room. It follows the same basic profile as the other pens in the Souveran line differently only in the material from which it is made: a semi-translucent purple acrylic. The color of the acrylic in person was a bit of a let down for me. Most of the photos of the pen I had seen online had shown the pen to have a rich, deep color. In reality, the acrylic is a bit lighter and more red in tone than I was hoping for. It also had an almost dusty appearance to the material. I was hoping for something a bit more akin to my Stipula Etrura Rainbow, where the acrylic is colored by still extremely transparent. Instead, I would probably describe this material as semi-translucent. The pen is very well polished, but something about the finish feels almost cloudy.

The cap of the pen features a black plastic medial in the finial with the Pelikan logo screen printed in silver. The cap features the “chiseled” step down in the finial and the standard Pelikan bill-type clip in a chrome finish. The steel cap band is very narrow and has the words “Pelikan” and “German” engraved around it.

The pen’s binde (the major portion of the barrel) is nearly perfectly cylindrical and has a silver-colored ring that separates the piston knob from the barrel. As on my other Pelikans, the piston knob sports a slightly smaller diameter than the barrel, and has rounded corners.

Also like on every Pelikan that I have ever used, the piston filler knob on the M205 turns smoothly and essentially no resistance, even with this mechanism being made out of plastic. (The folks at OMAS could take a couple of lessons about smooth piston fillers from Pelikan). The pen, despite its size, sports a decent ink capacity. 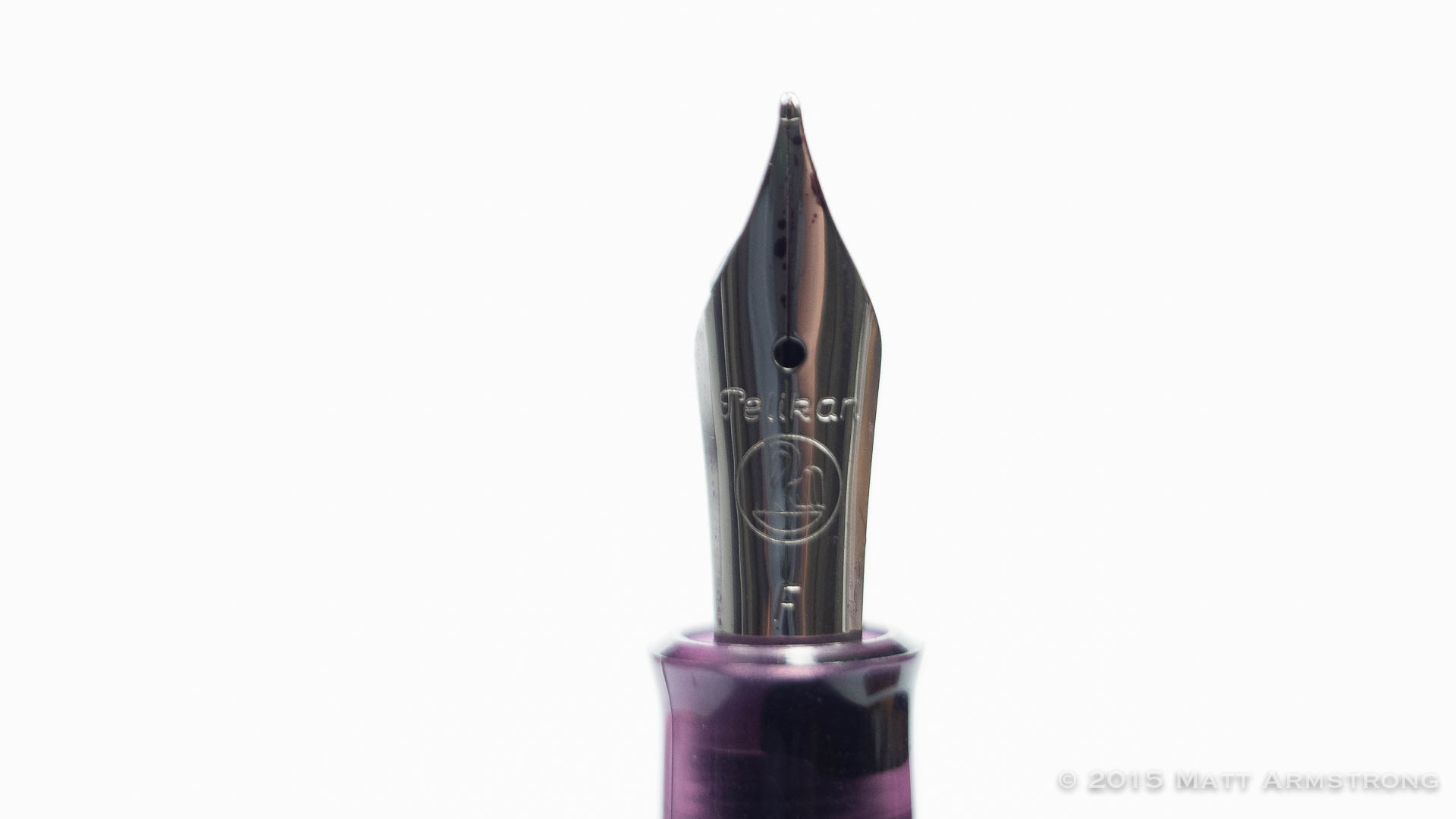 The Pelikan M205 Amethyst sports a small steel nib. Unfortunately, and quite uncharacteristically for Pelikan, the nib on my M205 came out of the box with the tines slightly misaligned. This resulted in a scratchy writing experience. Fixing tine misalignment is so simple as to almost not be worth a mention of the issue, but it unusual enough for Pelikans that I figured I should bring it up. (I have seen one other reviewer also mention her M205 Amethyst tines weren’t in alignment out of the box as well.)

Once I realigned the tines the pen wrote well. The nib was on the dry side of moderate, with a decent bit of pleasant feedback, and wrote as a slightly wider-than-normal fine. (Pelikan’s gold nibs tend to be a bit all over the map in terms of line width for the designation, so I really wasn’t sure what I was going to end up with on this steel nib.) There were no hard starts, no skipping, and no ink starvation.

The M205 Amethyst is solidly built, with smooth, slack-free threads and that tight, German-style attention to detail that I have come to expect from Pelikan’s fine writing instruments. It’s clear that this is a writing instrument meant to last, despite having “only” a steel nib and a lower price tag than their higher-end lines. 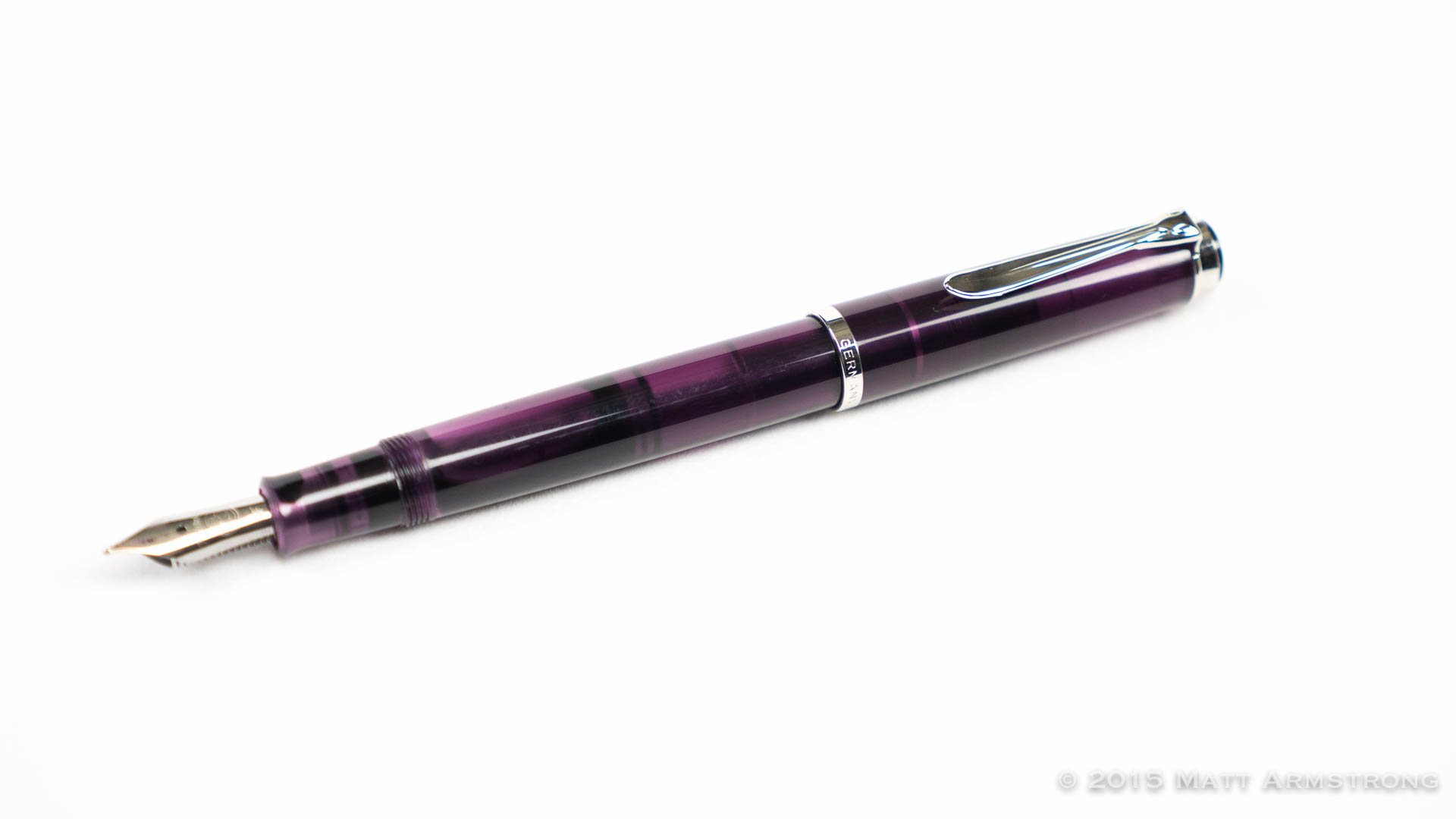 Despite the minor disappointments of the color being not quite what I had envisioned (which is more my fault than the pen’s) and the tines being misaligned, I was still pretty pleased with the M205 Amethyst, except for one thing: This pen is really, really small for me.

I have often talked on this blog about my preferences regarding pen length and width. Unfortunately, the M205 falls outside of those ranges pretty much across the board. Uncapped, the pen is simply to short for me to use comfortably. The pen can be posted, and it posts both deeply and securely. However, the M205 (and the M2xx and M4xx series as a whole) have a couple of issues which further complicate matters for me. The pen has a slightly narrow grip which, when partnered with its ridiculously short section, almost requires me to hold the pen far up the barrel on an area of the pen which is, in no way, ergonomic. When posted, it becomes far more usable for my personal grip, so long as I hold the pen on or above the threads (which are smooth, but not terribly sharp.)  Even still, I find the balance just a bit off in my grip, as I find myself cramping up when I use it for longer writing sessions such as writing out the first draft of this review. 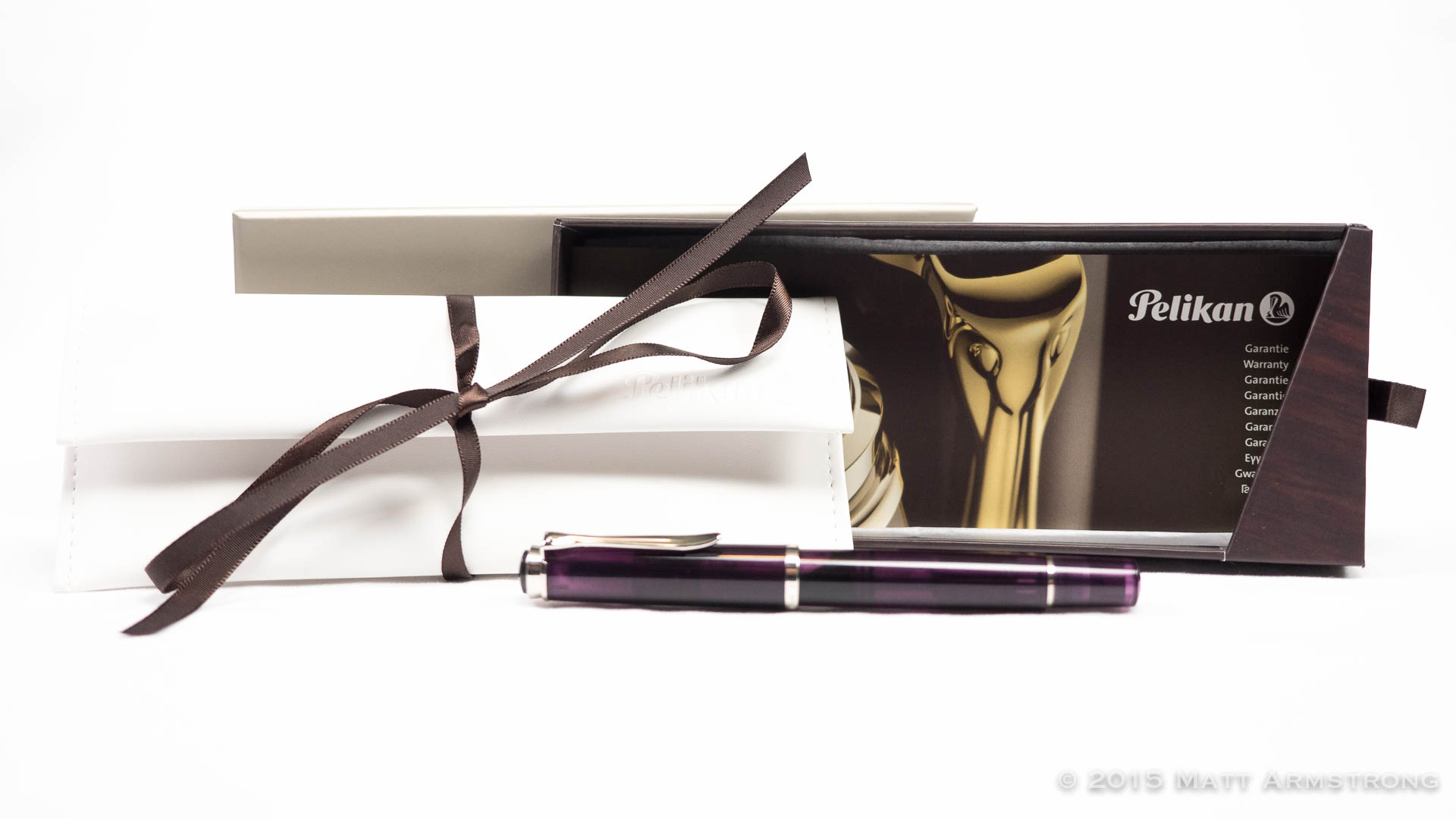 I should be clear: this pen is a great pen. It’s well made, it writes well. At $140, however, I found the M205 to be a little pricey for what it was. Other pens in this price range include the Lamy 2000, the Platinum 3776, Pilot Custom 74, Franklin-Christoph pens, or Edison Pens. In my mind, it sits a bit awkwardly between the mass market pens from Lamy, Platinum, or Pilot which all have 14k gold nibs but are a little “bland” in the design department, and the smaller scale operations of Franklin-Christoph or Edison which come with steel nibs in this price range, but really interesting designs. (Folks may rightly take umbrage with my calling the Lamy 2000 bland, but it is certainly a more classic design and material that what you’ll get from the Americans.) The M205 has a special edition color, but a relatively uninteresting steel nib and a more classic design.

If you’re a fan of smaller pens, or really love that dusty reddish-purple, the Pelikan M205 may be a pen worth checking out. It will be solidly build and a reliable, if not particularly interesting, writer. If you’re not, you may want to skip it.