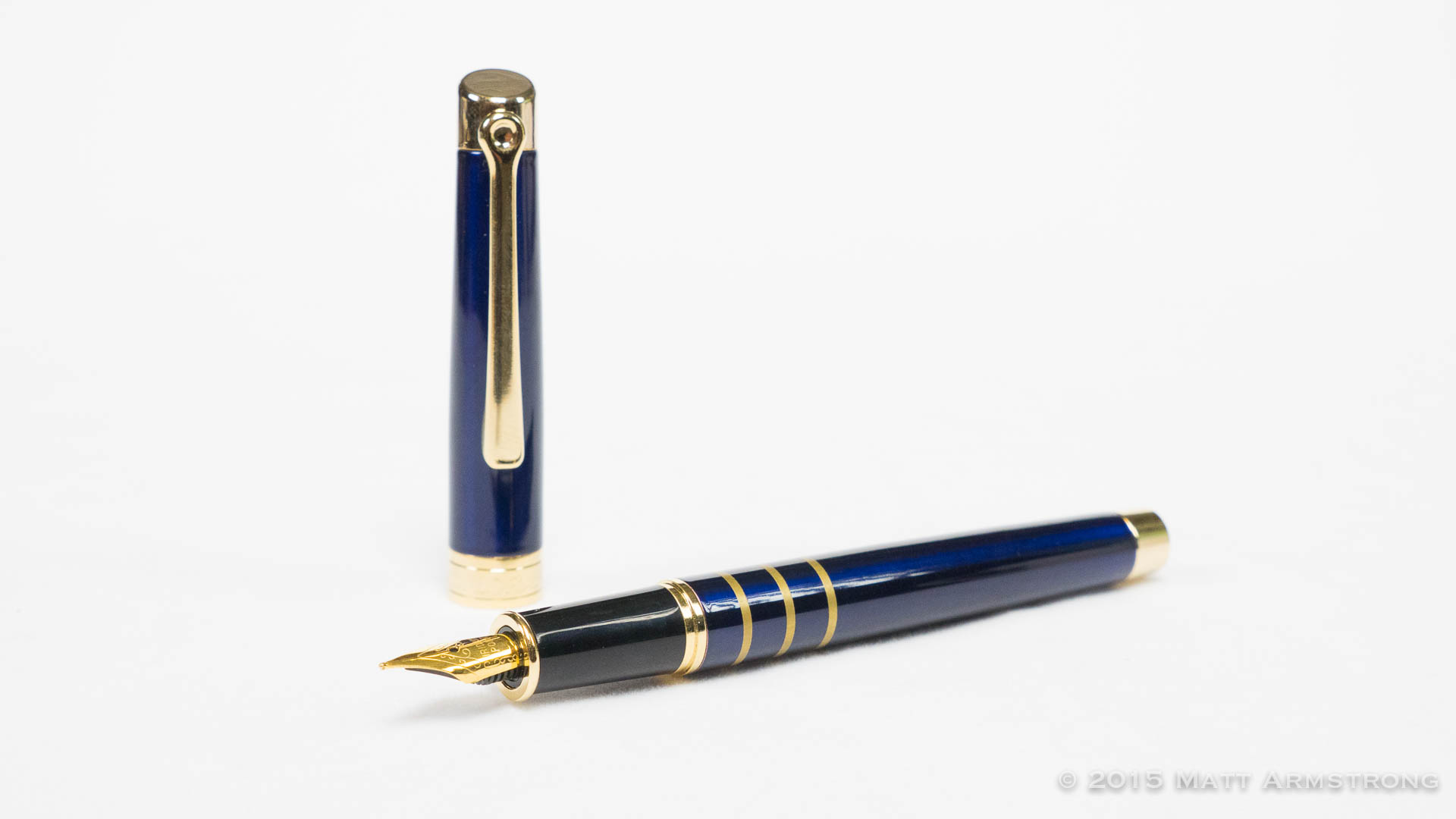 The pen for this review was donated to The Pen Habit by viewer Matt in exchange for an honest review. No additional compensation was provided. All opinions expressed herein are my own.

In 1938, as the result of the newly signed Wagner-O’Day act, the US created the National Industries for the Blind, an organization intended to provide manufacturing opportunities for visually-impaired Americans. They eventually trademarked the name Skilcraft, which was the brand under which blind-manufactured products were sold. Many Skilcraft products find their way into use in US Govermental organizations, and continue to do so even today. Among those items is Skilcraft’s “Executive Fountain Pen.” This low-cost fountain pen can be found from the Skilcraft website or sites like Amazon for as little as $7. 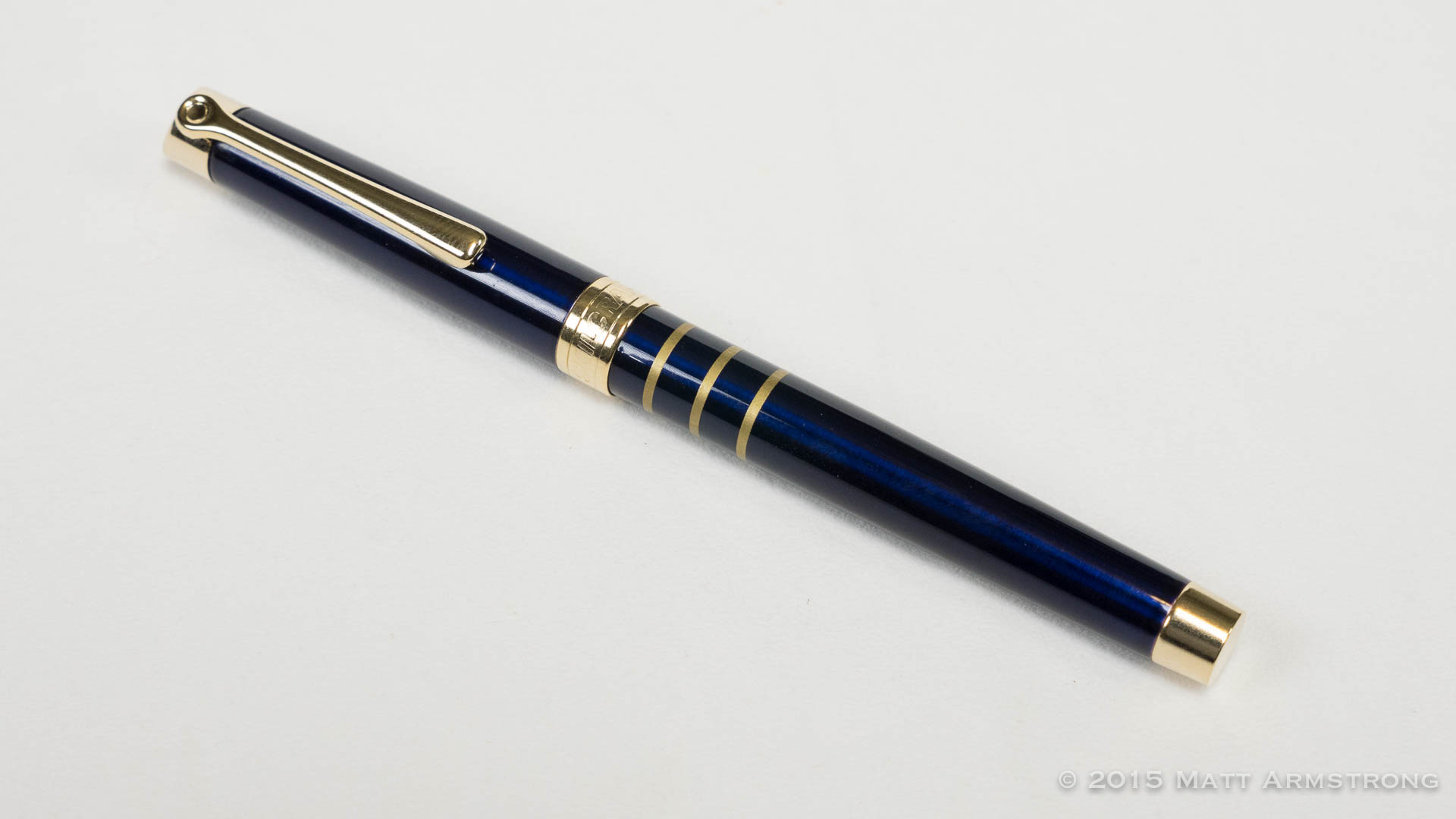 The unit for this review was provided to me by Pen Habit viewer, Matt, a long time ago. As in, about halfway through Season 2. When the Skilcraft Executive Fountain Pen arrived in my PO Box, I will admit my initial reaction was not unlike my reaction to that generic, off-name candy your neighbor’s 12-year-old son sells door-to-door for a band trip fundraiser: The “Caramel” candy bar is okay, but it’s not as good as a Caramello™. I was afraid that a fountain pen assembled by the visually impaired would be more of a gimmick than an actual, usable writing instrument. I was pleasantly surprised to discover I was very wrong.

The pen arrives in a cardboard-backed blister pack. At first glance, it looks like any other low-end fountain pen you’d see hanging on a dusty back corner shelf in a local mom & pop office supply store. After a few years of buying high-end pens and enjoying the experience of sliding off the cardboard sleeve, then opening up the pen coffin, I had a negative, almost visceral reaction as I pulled the pen out of the envelope.

My negative impression of the pen was exacerbated by a relatively dated design in blue and gold. This metal-bodied pen is covered with a navy blue lacquer. The pen’s cap is topped off with a gold-colored metal finial that angles up to a wedge on one side. The firm, gold clip attaches to the finial and shows off a rather bulbous profile. The base of the cap is offset with a thick, gold-colored band on which the word SKILCRAFT has been stamped.

The barrel of the pen continues in the navy blue lacquer but is highlighted near the section with three gold-colored rings also in lacquer. The barrel tapers toward another gold finial at the end which is terminates in a flat top.

The pull-off cap removes to reveal a black plastic section that tapers very slightly toward a gold washer. The pen utilizes a small, gold-colored steel nib and a plastic feed. The nib, which is available in either fine or medium widths, is a relatively standard looking Iridium Point nib with no special branding or markings.

The pen is a cartridge/converter pen which accepts both long and short international standard cartridges and converters. It comes with one black and one blue cartridge, but does not include a converter. I was able to slot a spare Schmidt K5 converter in the pen, but ended up having to remove a small spring that was in the bottom of the barrel to do it. (I’ve not missed the spring since I removed it, and I’m not entirely sure why it was there in the first place.)

From a design perspective, the Skilcraft Executive Fountain Pen leaves a lot to be desired. It feels very reminiscent of the University of Michigan circa 1986. Blue and gold is a fine combination, but the shades of blue and gold on this pen just feel a little garish. (Especially when I compare it to a more refined blue and gold of a pen like my Platinum 3776 Chartres Blue). The gold-colored hardware is not particularly streamlined, and feels a bit out of place with the rest of the pen.

Despite a relatively kitschy design, the pen is solidly constructed. The metal body gives it a bit of heft. The threads are well-machined. Everything is attached and assembled robustly, and the pen feels like it can take a fair bit of abuse. The cap posts on the end of the barrel securely without damaging lacquer. Even the “click” of capping the pen feels solid.

Where the pen really surprised me though, was how it writes. My experience with lower-priced pens (mostly those from China) has been that they’re rather hit or miss; you never know quite what you’re going to get. Sometimes you get a good writer, sometimes you don’t. But rarely is the writing experience great. The nib on this Skilcraft Executive Fountain Pen is spectacular. It’s wet, it’s smooth, and it’s nicely medium. In writing the handwritten version of this review, I had no issues at all: no hard starts, no skipping, and surprisingly, no ink starvation. (Usually these lower-end pens tend to struggle a bit with ink starvation.) It’s a small steel nib, and it doesn’t have a lot of bounce to (which is to be expected), but despite being something of a nail, it’s a very smooth nail.

In the hand, the pen is…okay. It’s just long enough that it can be used without posting, but it does post if you prefer that. I find the grip to be a bit too narrow for me, but still usable. Despite that, the pen just feels un-ergonomic. It doesn’t have a great balance in the hand, either posted or unposted, and the small section caused me to cramp up a bit more often than I normally do with better-balanced pens.

Nobody will ever mistake the Skilcraft Executive Fountain Pen as an icon of high style; but as an inexpensive workhorse pen, it does a pretty darn good job. I’ve used many a pen that cost several orders of magnitude more that don’t write as well. It’s not a pen that I’d pull out in a high-powered business meeting if I wanted to show off my collection, but it’s a pen that works very well as a shop pen, a loaner fountain pen (for those plebes who don’t understand what they’re missing by using their $0.10 Bic ballpoints), and a pen that makes an excellent companion for checking items off your grocery list in the store. Plus, it does help to support a company that gives employment opportunities to the visually impaired. If they would update the design of the pen parts to a more contemporary look, I think Skilcraft would have a real winner on its hand. As it is, they have built a wonderfully-writing $7 workhorse that supports of a good cause but looks a little dated.