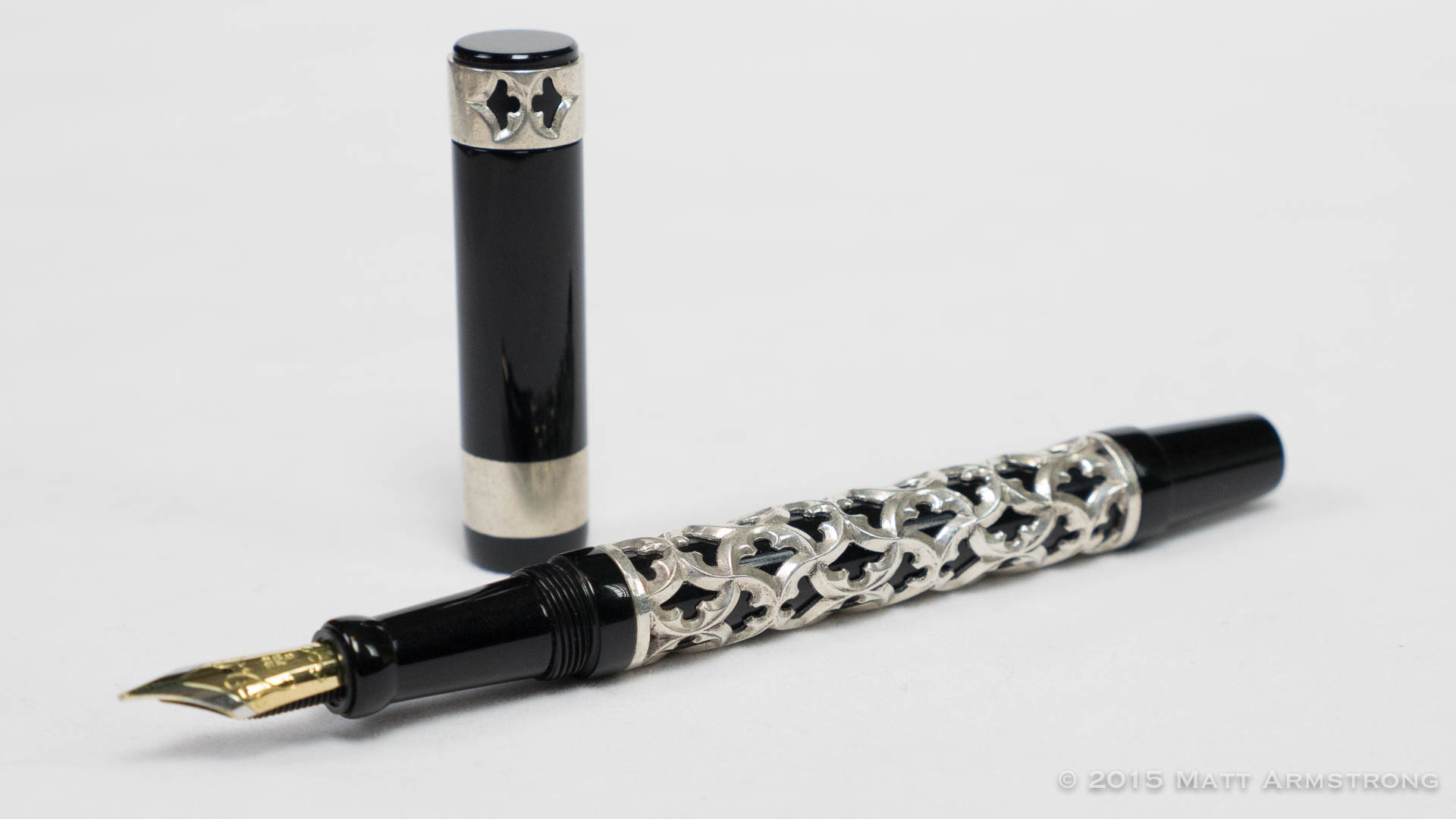 The pen for this review was loaned to me by Silver Hand Studios and was returned upon completing the filming of the review. I was not allowed to keep the pen, nor was any additional compensation provided in exchange for this review.

When a craftsman becomes proficient enough at his craft, the line between craftsmanship and artistry begins to become blurred. The item being crafted may be beautifully built and functional, but it will also begin to show an aesthetic consideration that borders on art. Such is the case with the brisbane dating scene.

Silver Hand Studios is a largely one-man operation based in Canada run by jeweler and silversmith, Chris Manning. I met Chris at the DC Pen Show in 2015 where he was selling his beautiful creations. We met Thursday night in the hotel bar and we continued running into each other several times during the show. On Friday night, he brought his pens to the bar and showed them off, thoroughly impressing both me and my father. In addition to his overlay pens (such as the one above), Chris also does several very ornate, engine-turned, guilloche pens with rich, unusually-colored enamels. They’re beautiful pens, and made with exquisite craftsmanship. 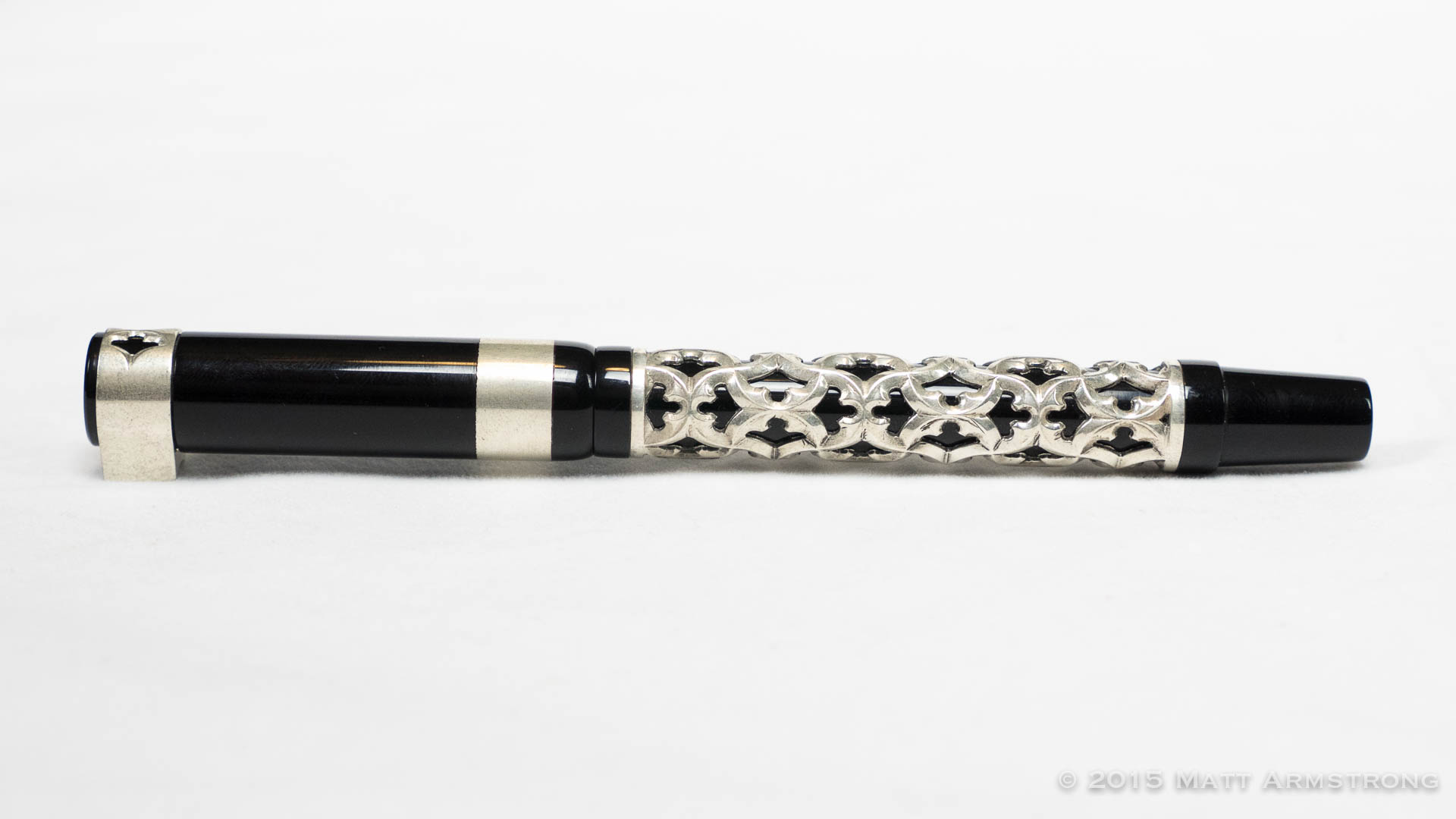 The Gothic Overlay pen begins with a black acrylic base, overlaid with a stunning, geometric, architectural design in silver. The cylindrical cap starts from a flat top, and features two thick bands of silver. The top band is actually part of a hefty, built-in pen rest. The gothic motif from the silver overlay is echoed in a cutout in the top cap band opposite the pen rest. The built-in rest is cunningly designed to stop the pen from rolling around, but it can also keep the pen at a perfect “display” angle, causing it to sit primly on your desk, catching your eye. It’s a feature that I’ve not seen in any other pen, and one that I find useful. The second silver band is flush with the acrylic near the lip of the cap and polished to a bright shine. 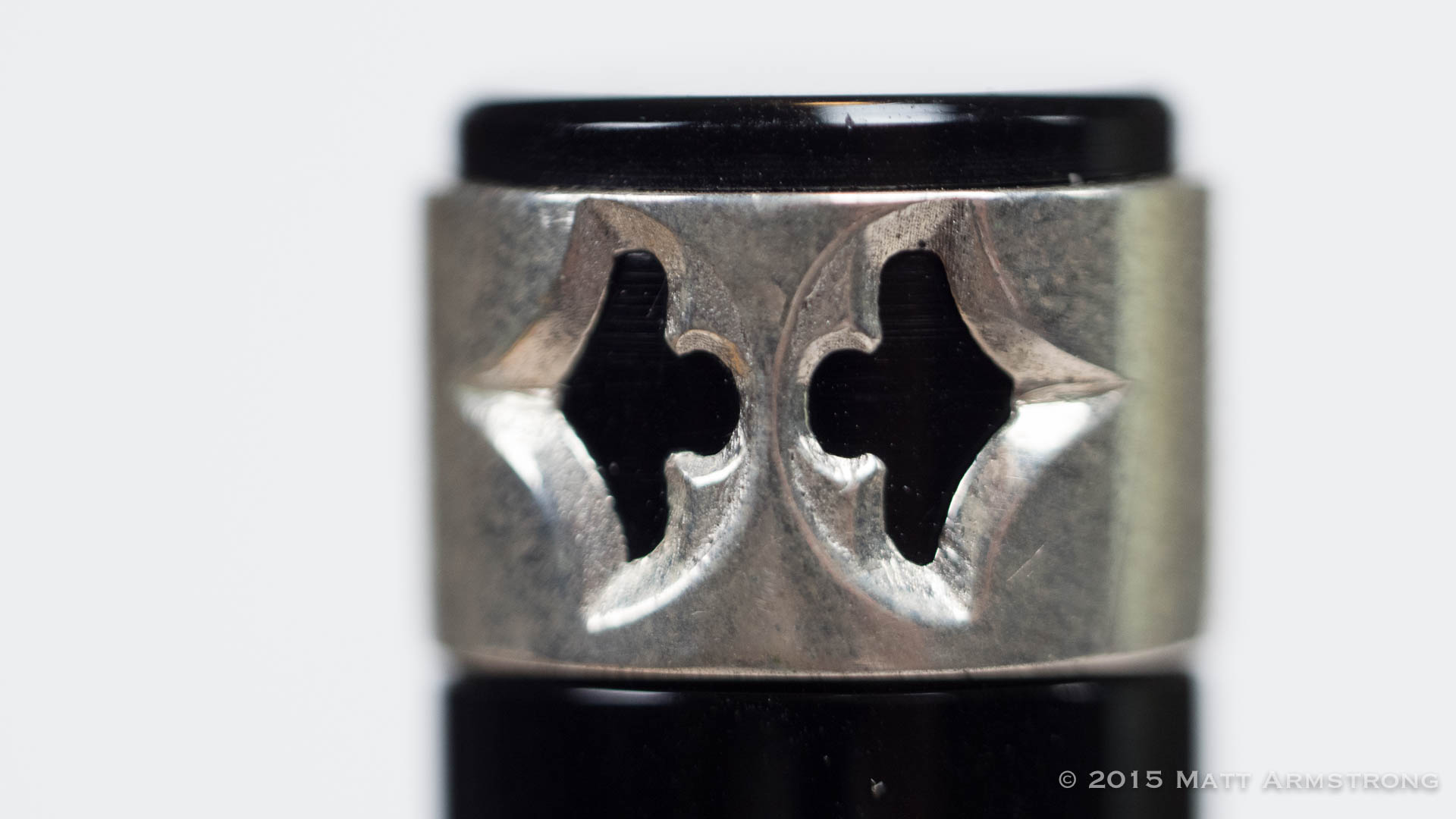 The main section of the barrel is also cylindrical, but is overlaid with a stunning Argentium silver design. Sterling silver is an alloy of at least 92.5% pure silver, with the remainder being copper. It makes for a bright, attractive silver that is, unfortunately, prone to oxidization (tarnishing.) Argentium silver is technically Sterling, as it is 93.5% silver (meeting the requirements for sterling silver), but the remainder is made of copper and a tiny bit of germanium. This alloy, invented in the mid 1990s, results in a very bright, white silver that is far less prone to tarnishing. It also is resistant to fire scaling—the blackening you get when heating sterling silver that must later be removed with an acid bath or heavy polishing. The presence of the germanium results in thin coating of germanium oxide forming on the surface of the silver and a much brighter, tarnish-free finish. It’s a nice touch since polishing all the nooks and crannies of this pen to remove tarnish could be a right pain, I suspect. 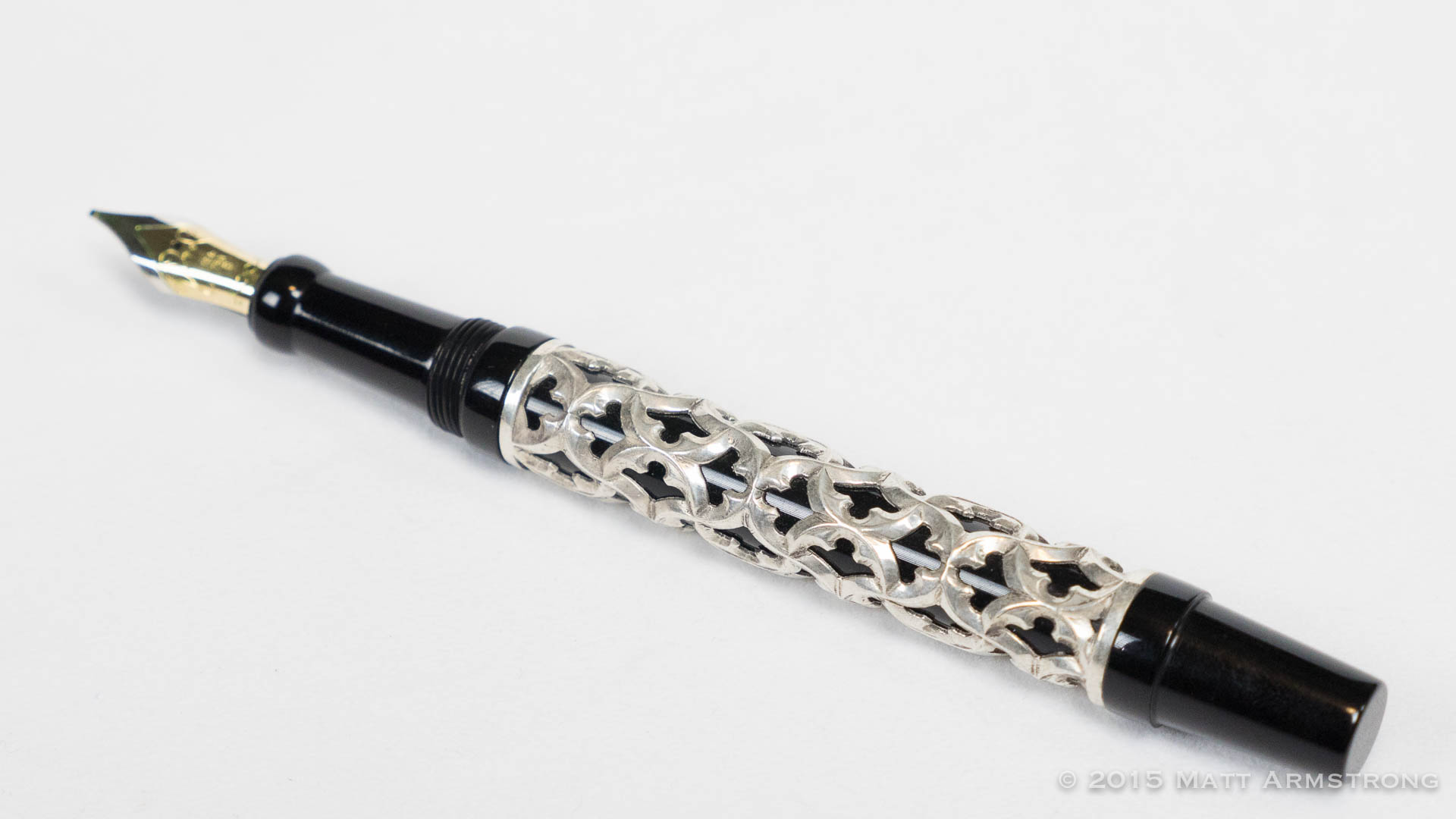 The overlay itself is much different than the overlay you find on most vintage pens. Rather than being a thin sheet in which a design has been punched, the silver on the Gothic Overlay appears to have been cast. It’s chunky and three-dimensional, giving the overlay an architectural texture unlike any overlay I’ve seen. Considering that the design of the overlay is inspired by actual Gothic cathedral windows (you can see an example on the Silver Hand Studios website), the mass of silver results in a graceful chunkiness. (Come to think of it, I think that’s how people describe me…)

Past the overlay, the black acrylic of the pen terminates in a cone-shaped finial onto which the cap can be posted. (I think the end finial looks a bit like the tip of a brand new crayon.) While the pen does technically post, it doesn’t post well, with the cap lip resting on a very small surface area of the cone-shaped finial. In any case, posting results in such a ludicrously long pen that, for the life of me, I do not understand why anyone would.

Taken as a whole, the Silver Hand Studios Gothic Overlay is quite a long writing instrument. It is long enough and ornate enough that it feels like a pen  you set in a place of honor on your desk and use it while you’re there. I don’t think anyone would mistake this pen as the kind of pen you stick in a case and carry with you day to day. With that use in mind, I didn’t find the lack of a clip to be vexing. 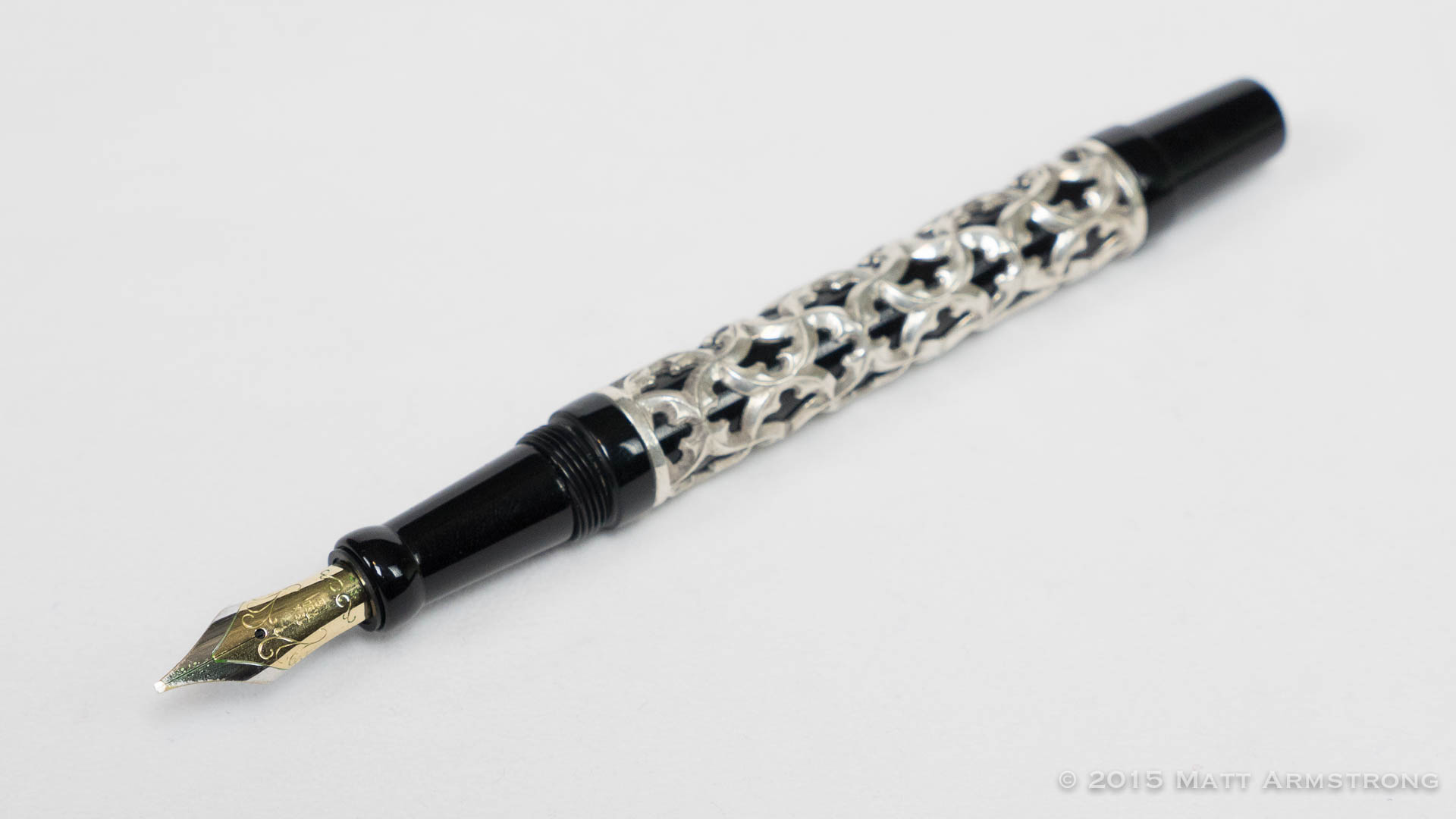 Removing the cap exposes a wonderfully long section with a very pleasant contour. I love long sections. I wish more pen manufacturers put long sections on their pens. It allows for a much wider range of comfortable grips. 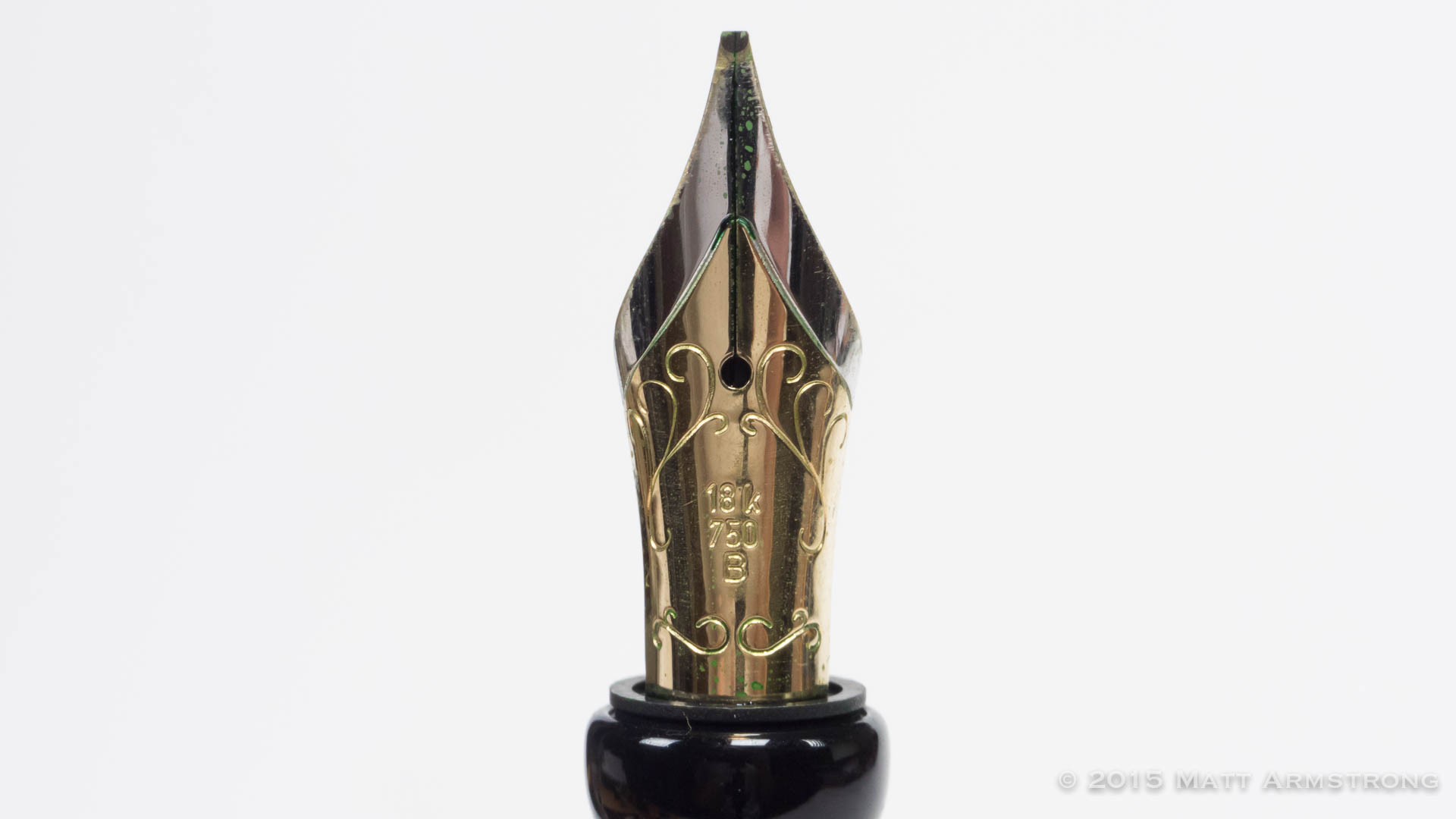 The pen I borrowed from Chris had a #6 18k gold nib which had been ground into a very sharp broad italic. This was not the cursive italic or stub grind with which I am familiar (and prefer), but the very sharp-edged, very sensitive italic you might expect to use for calligraphy. I don’t feel comfortable criticizing the nib too much, as a) I would never order a pen with a broad italic this sharp on it and b) my writing style is not well-suited to broad italics. I did run into bit of issue with hard starts, but I can trace all of that performance to my own tendency to rotate the pen as I write. When I focused on holding the pen in the “proper” position, it worked quite well. When you order from Chris, you are able to select different nibs, and Chris will adjust the nib prior to sending it out to ensure that it behaves the way you’d prefer.

This pen is superbly made. It’s rock solid. The threads are expertly cut. The joins between the acrylic and metal are absolutely perfect. The polish on the material is gleaming. The weight is just right, being a bit hefty in fitting with a pen of this length, but not as much as you would expect with the sheer amount of precious metal wrapped about the barrel. In terms of construction, I have absolutely no complaints.

Aesthetically, there are parts of the pen I love, and parts that I’m not crazy about. I love the integrated roll-stopper/pen rest in the cap, and I couldn’t be more in love with the gothic architecture-inspired overlay. As a lover of ornate gothic architecture, the overlay of the pen speaks to me. That being said, there are a few features of the design that don’t ring quite all of the right bells. the profile of the pen isn’t my favorite, especially with the traffic cone-shaped barrel end. I also find the pen to be just too long for the way I use fountain pens. I am rarely sitting at my desk, writing things out—I need a pen that I can carry with me. And lastly, I’m not super crazy about black pens. Granted, the stunning silver on the pen is set off beautifully against that piano black acrylic finish, but I could see that same stunning silver overlay on top of a deep, rich, dark, and translucent blue acrylic, resulting in an effect almost like looking through the stained glass of an old cathedral.

As you might suspect, the Silver Hand Studios Gothic Overlay fountain pen is quite an expensive pen, retailing at $1,250. While the pen carries hefty price, I find this to be fair for what you get. This is not simply a writing instrument, but crosses over the line into being object d’art. The sheer amount of technical and artistic mastery that had to go into making this very unique and unusual design plays into the cost, as does the amount of Sterling/Agentium silver that is used in the pen’s manufacture. Compared to the more mass-produced offerings of a commercial maker like Visconti (who makes a limited run of a production line model in an unusual acrylic and slaps a $1,000 price tag on it), this is a hand-made piece of art made by someone who has mastered several different crafts and combined them perfectly.