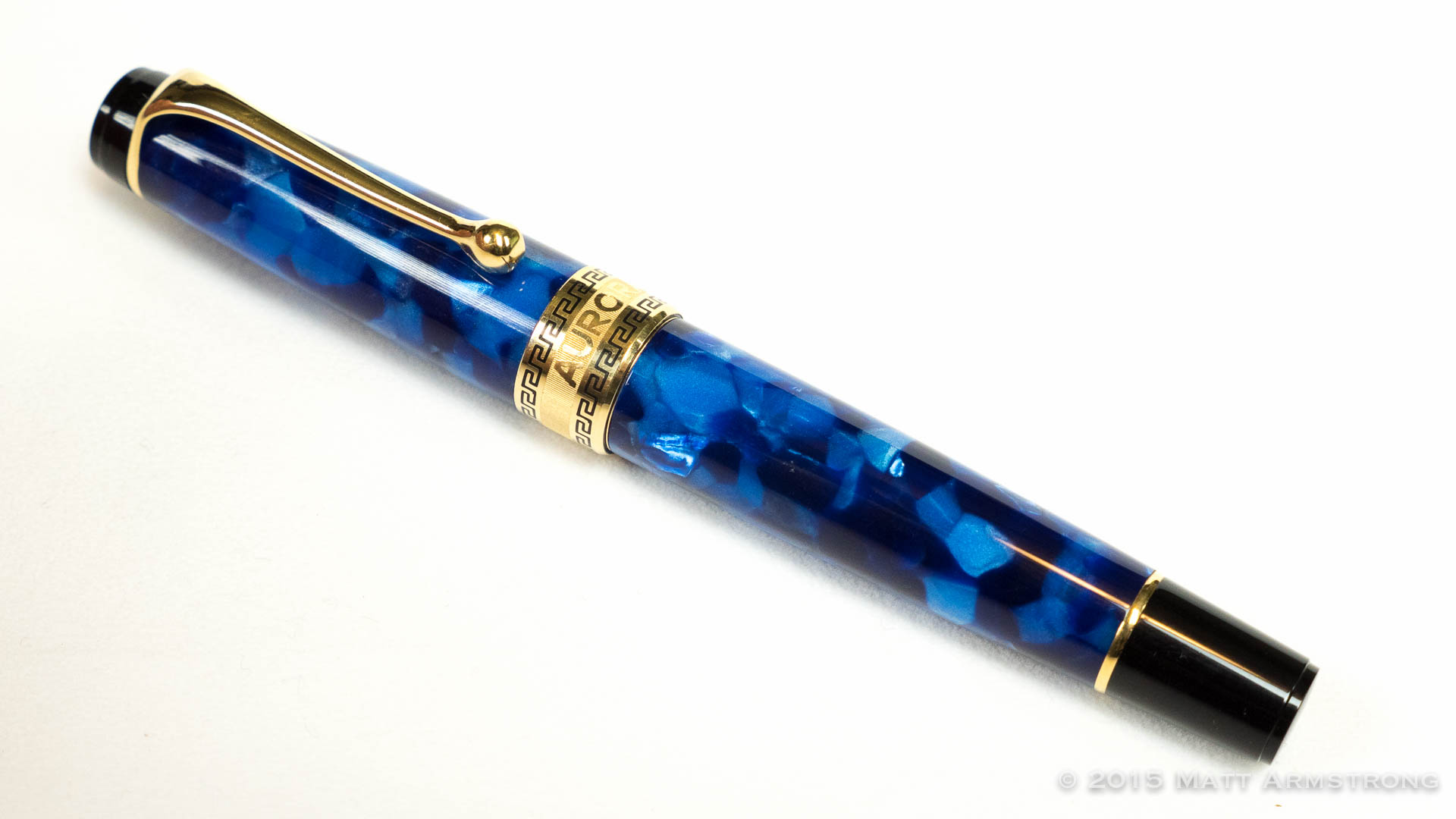 My first experience with an Aurora pen was with a pen that I borrowed for review purposes back in Season 2: the Aurora Style. It was an interesting pen, but I wasn’t terribly enamored of it when all was said and done. One of the lower-cost offerings from the Italian maker, the Style didn’t create a great first impression, and it held me back from purchasing another Aurora pen for a while.

Eventually, I purchased one of Aurora’s flagship pens, the Optima. The Optima comes in a variety of finishes, but I was immediately drawn to the stunning material used to make the Auroloide version of the Optima. Auroloid is, as some people have called it, “modern” celluloid. Classic celluloid is actually cellulose nitrate. It’s a beautiful material that is easy recognized by its distinctive aroma of camphor, and a certain “warmth” in the hand. It is also unstable, rather flammable, and prone to discoloration from the off-gassing of latex sacs. (Take a look at an old Sheaffer in Jade celluloid and you’ll see what I mean.)

Aurora’s Auroloide is cellulose acetate. It feels very much like acrylic, but with a bit more depth of color and a slightly warmer feel in the hand. It doesn’t have that same camphor smell. It also tends to be much more stable than its cellulose nitrate cousin. (There are early reports of Auroloide shrinking over time, but that issue appears to have been caused by the dyes used to color the material and has since been resolved.)

The blue auroloide of this pen is stunningly beautiful and almost looks like topaz-colored quartz in appearance. It’s rich and deep, with a great deal of sparkle. The line comes in a whole rainbow of colors, between the production colors of maroon, green, blue and the other, limited edition colors (I’ve seen yellow, brown, bright red, orange, grey, and a pale, Mediterranean blue color among others.)  I was severely tempted by the green version (because, um, green), but I eventually went with the blue, because it was in stock and I am not known for my patience.

When my Optima arrived, I opened the box and was immediately disappointed. The pen was beautiful, but it was SO SHORT!  If you’re a regular reader, you know that I don’t really care for small pens, and this one was much shorter than I had expected. (That’s a good reminder to always check to length stats before buying a pen you’ve never handled before.)  Notice, however, that I said it was short, not small. The Optima’s width is quite nice, but the length was too short, which left the pen feeling just a bit on the stubby side.

The construction of the pen is solid, and the result just drips Italian design. Nobody will mistake this pen as understated, but neither is it as flash or over-the-top as many other Italian-designed pens. It straddles the line between attention-grabbing and refined beautifully. The pen is capped off by a polished, flat, black finial. The clip is a sturdy arch, with a graceful swoop, and terminating in a nicely integrated ball of folded metal. The cap flared toward the cap lip, and is highlighted with a thick, gold-colored cap band which features a Greek key design in enameled black, and matte engraved design around the center of the band which sets of the words “Aurora” and “Italy” which are in a mirror shine.

Below the cap, the barrel tapers down to a flat-ended, black piston filler knob. The side of the barrel is engraved.

Under the cap, you see a clear acrylic ink window, a very nice feature that far too many piston fillers seem to neglect. The section is made of black acrylic, and is, without hyperbole, one of the most comfortable sections I have ever had the great pleasure to hold in my hand. Even if I hated the rest of this pen (and I don’t) I would still recommend it based solely on the section. Aurora has opted for a much longer-than-normal section, which ensures that even people like me, who hold their pens a bit higher than others, don’t have to hold the threads. I love holding this pen in my hand.

When it comes to the nib, this Aurora is something pretty special. Aurora is one of the few pen manufacturers in Europe or America that manufactures its own nibs rather than outsourcing the work to one of the other many major nib makers. (Rumor has it that Pelikan has moved nib making back in-house in the last couple of years after outsourcing it to Bock.)  The result is a nib which has a slightly different shape than you’re used to, but which is tuned nearly to perfection. It’s quite a rigid nib, with very little give. The medium line is about what you’d expect from a European pen: not too wide, not too narrow. The tines on this pen were perfectly in alignment, and the pen was adjusted to a perfect level of ink flow: enough to feel wet but not so wet as to make the pen unusable on regular paper.

That being said, Aurora’s nibs are known for providing a LOT of feedback, and this nib was no exception. There was no scratchiness to the nib, nor was there any skipping, hard starting, or ink starvation. Just a lot of feedback…too much feedback for my tastes. It appears that Aurora has taken the position that it’s easier to smooth a nib than to properly un-smooth it, so they have opted to leave their nibs relatively unpolished. I have, in the past, blasted other companies for doing the same on their nibs, and I have to admit that I’m not the biggest fan of it on Aurora’s pens either. But as the rest of the writing experience is so exquisitely tuned, I’m willing to give it a pass as a deliberate choice rather than a lack of quality control. Just note that if you want a buttery-smooth writing experience with your Aurora, you’ll have to break out the Micromesh™ like I did.

Despite my initial misgivings about the size of this pen, and the overt feedback on the nib, I have grown to absolutely adore this pen. It has migrated into my top 10, and possibly even my top 5. I have to write with the pen posted to get the length to the point that it feels balanced, but since it posts so deeply and securely, once it is posted, it a dream in the hand. And a bit of polishing has made the nib sing like Eva Cassidy. The pen is perfectly constructed, writes incredibly well, and looks like a dream. I lurve this pen.