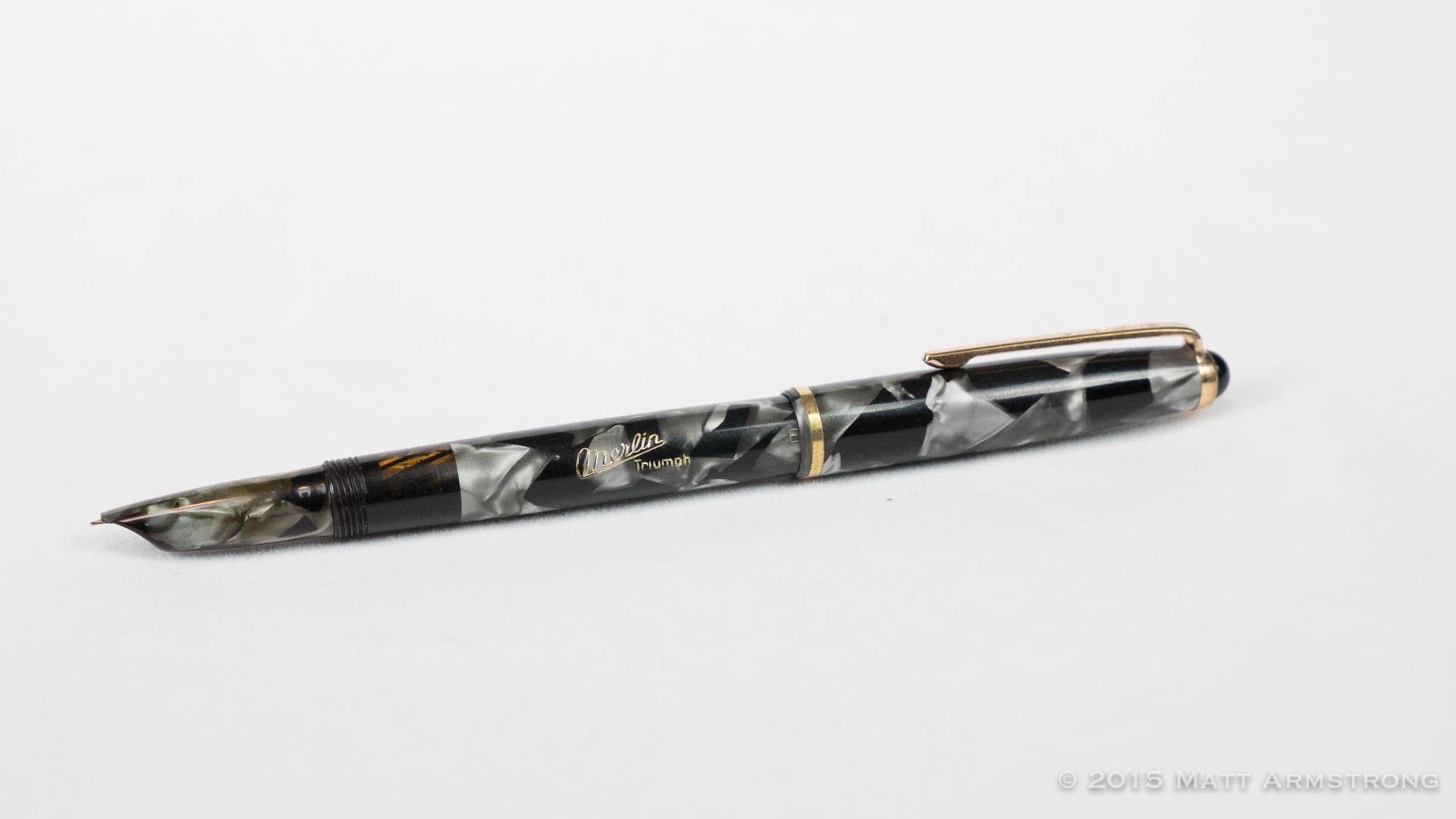 One of the best things about reviewing pens is the opportunity I have to get my grubby little hands on unusual or rare pens that aren’t well known. In Season 2, I did a review of a neat little Dutch-made pen called the Merlin 33 that I picked up for a song on eBay. As a result of that review, Pen Habit viewer Mike Shue was kind enough to send me another Merlin pen that he came across, the Merlin Triumph. This is a cool, unusual little pen that has the added benefit of being extremely rare. There is very little known about the Merlin Triumph out there. 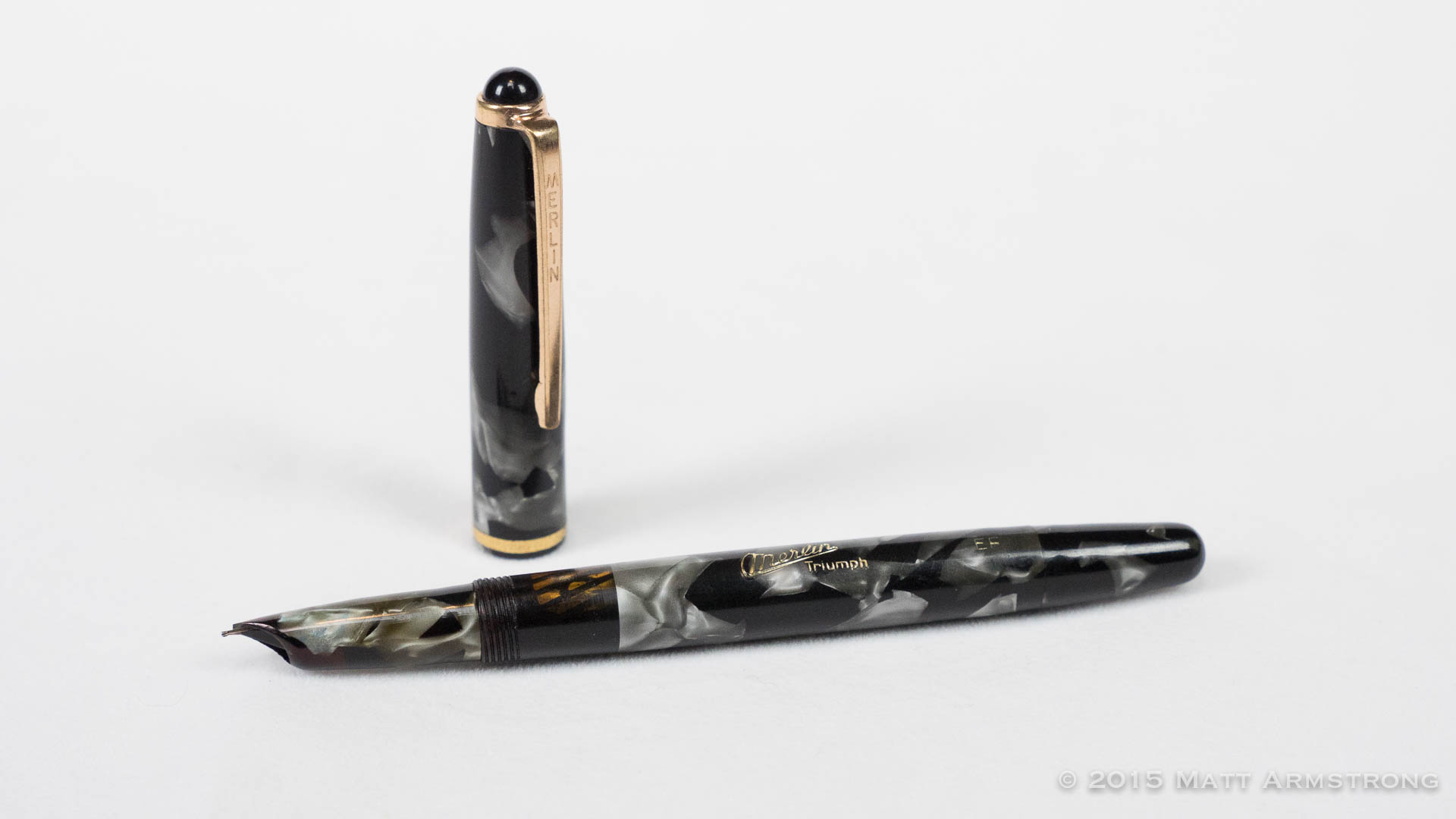 Like the 33, the Triumph is a small pen. It’s a conservatively-styled pen body, with a pretty standard torpedo-shaped profile. The pen features a small black finial that holds the gold-plated clip place. The clip has a very streamlined, mid-century modern feel about it, with “MERLIN” stamped into the clip’s face. (It is, essentially, the same clip that appears on every Merlin pen I’ve ever seen.) The cap and body of the pen are made from a black and white quartz-like celluloid with a lot of dimension and depth. The cap is finished off by a narrow, gold-colored band just above the lip of the cap.

The body of the pen continues the same torpedo shape. The side of the barrel is engraved with the Merlin logo and the word “Triumph”, both of which are highlighted with gold leaf. Near the seam between the barrel and the blind cap, there is also a small “EF” indicating the nib designation.

The blind cap removes to uncover a black plastic piston-filler knob with knurling around the top edge. The piston moves quite easily in the barrel with very little tightness or friction.

Removing the cap reveals a quite sizable ink window allowing you keep track of your ink levels. Beyond the threads and the ink window, though, perhaps the most unusual thing about this pen is the hooded nib. The black and white celluloid continues through the tapering section to a blunted hood that covers the majority of the nib. It’s unusual to find hooded nibs from this era outside of the Parker 51s that were popping up about this time. I found this hooded nib to be even more hooded than the Parker 51 nibs—so much so, in fact, that it nearly disappears when you put the nib to paper.

I did not disassemble the pen to look at the nib and feed in great detail (it is not my pen, after all), but I would assume the pen probably has a 14k gold nib. I have also heard it referred to as a “Warranted Osmi 14k Nib.” It was a touch wide for an extra fine but wrote with a nice, smooth, wet line. There was a tiny bit of scratchiness to the nib, but it was nothing that couldn’t easily be remedied.

In hand, well, this pen wasn’t quite my cup of tea. I like the look of it, and I love the material, but the pen was far too short for me to be able to use unposted. When I posted the pen (again, carefully, because this wasn’t my pen) it was far more usable, but still felt too narrow. I often found my fingers resting right on the threads, which fortunately weren’t too sharp. Were this a new pen from a current, modern manufacturer, it wouldn’t interest me very much as a writing instrument. I am not crazy for hooded for nibs (I want to SEE those gorgeous nibs!), and I really didn’t care for the hooding on this nib. I found it more difficult than usual to keep the nib oriented properly to the paper, and often found myself rolling the pen inadvertently. And the smaller size makes it less-than-ideal for me. It’s a good writer and a well-built pen. It’s just not quite my cup of Earl Grey.

What does intrigue me about this pen is its rarity. I wasn’t able to find any photos or mentions of the Triumph online aside from Mike and those folks to whom he has sent the pen to look over. I’ve even looked for other Merlin Triumphs on sale but haven’t had any other luck. Since the Merlin 33 came in such a huge variety of finishes, I would be interested in learning more about the history of the Triumph, or see what other finishes were used on this model.

With so little known about the Merlin Triumph, and the rarity of finding examples of this pen in the wild, I consider this blog post and video less of a “review” (because where are you going to find a huge cache of these to purchase?) and more about documentation of this unusual little pen. If any viewers happen to have photos of Merlin Triumphs they have found out there in the wild, please send them my way. I’d love to learn more about the Merlin Triumph and any variations that may exist. And if you see one for sale somewhere, you might want to consider picking it up. Even if it’s not a great fit for you, they appear to be very unusual pens that someone might take quite an interest in.