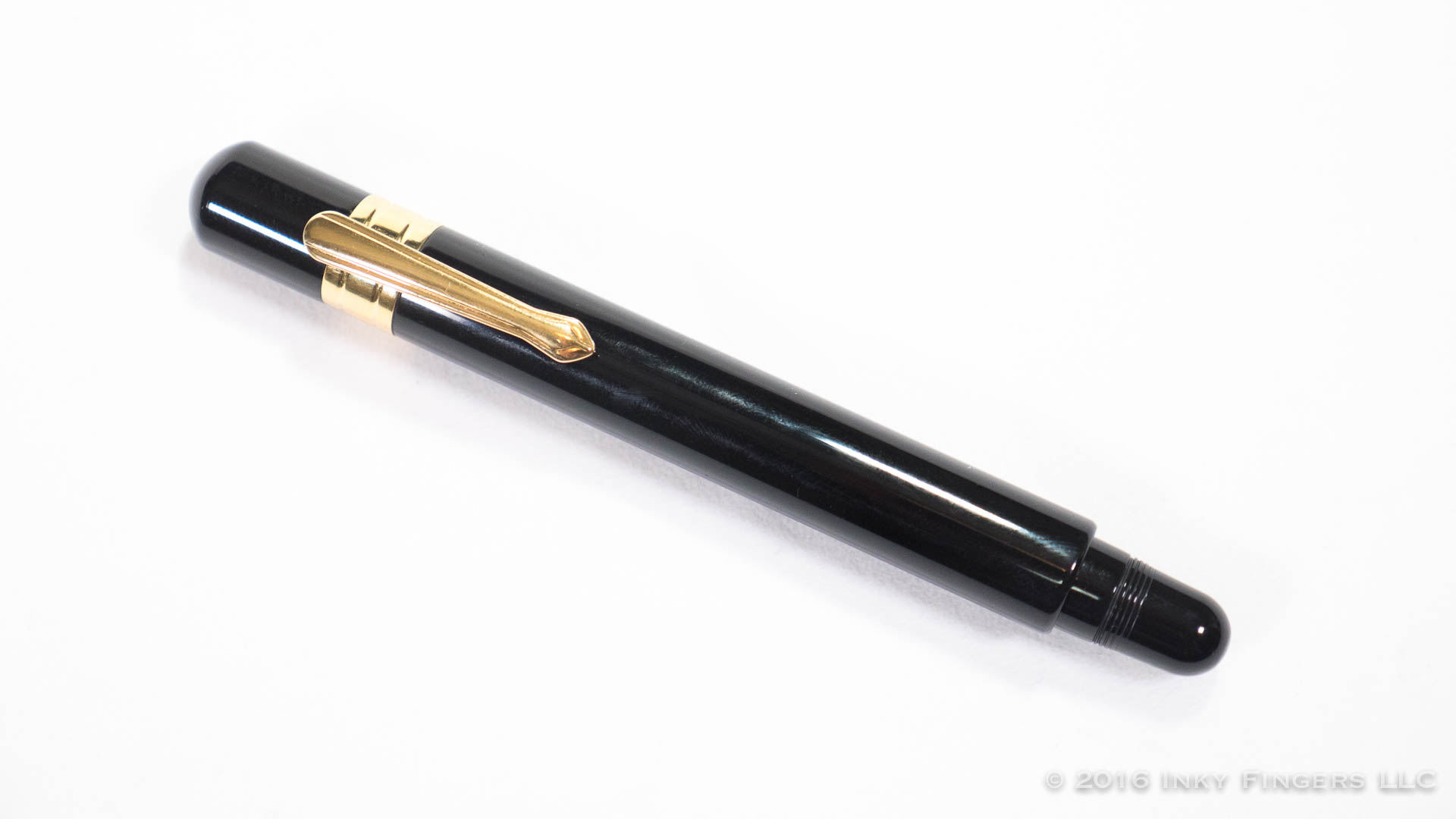 The pen for this review was provided free of charge by Pen Habit sponsor, singles darwin, in exchange for an honest review.

I love trying a new pen from a brand I’ve never used before. It’s always fun approaching a new pen without any preconceptions about how it writes based on other pens from the brand.

The http://penhabit.com/flirt-4-cam/ is my very first pen from this American-based company whose pens are distributed by the Japanese firm, Itoya. While Taccia was founded in the United States, the country of manufacture for their pens isn’t readily clear. Most online accounts of the pen seem to indicate that Taccia pens use German (Jowo) nibs, however.

Normally, I’m not a big fan of pens that take the “traditional” designs too far out in left field. I don’t mind companies that try out designs outside of the norm, but I am not always drawn to them. One of the design tweaks I have started noticing more often is where the pen’s “cap” is less of a cap and more of a “sleeve.” This is a variation on the pocket pen concept (best represented, perhaps, by the iconic Kaweco Sport series) where the cap really requires posting in order to be usable. When this design is applied to “full-length” pens, where posting may not be either desired or even possible, I start to lose interest in the design a bit. 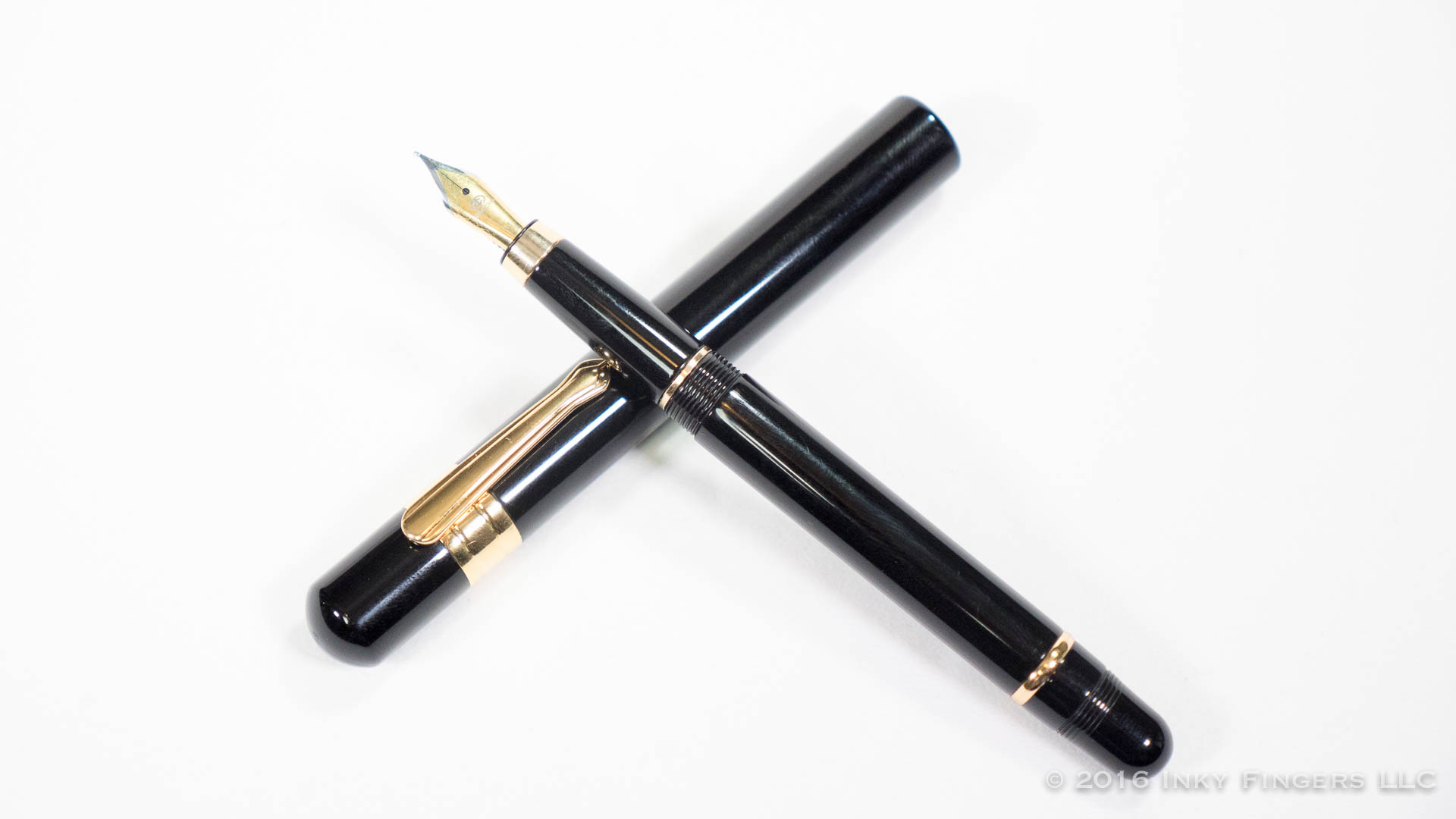 Usually. But in the case of the http://penhabit.com/flirt-4-cam/, this design seems to work quite well.

The Covenant has both an unusual and, simultaneously, classic look. My model of the Covenant, the Jet Black version, is made of black acrylic with gold accents. It is also available in a dark blue and black-swirled material called Midnight Breeze, and a brown, bone, and cream-colored version (that I find exceedingly attractive) called Parchment Swirl.

The pen’s profile when capped is dominated by the huge cap sleeve, which covers all but a couple of centimeters of the pen body. It has a large, dome-capped finial and a thick, chunky gold-colored cap band to accent the deco-style gold clip. The band is laser-engraved with the name “Taccia.” 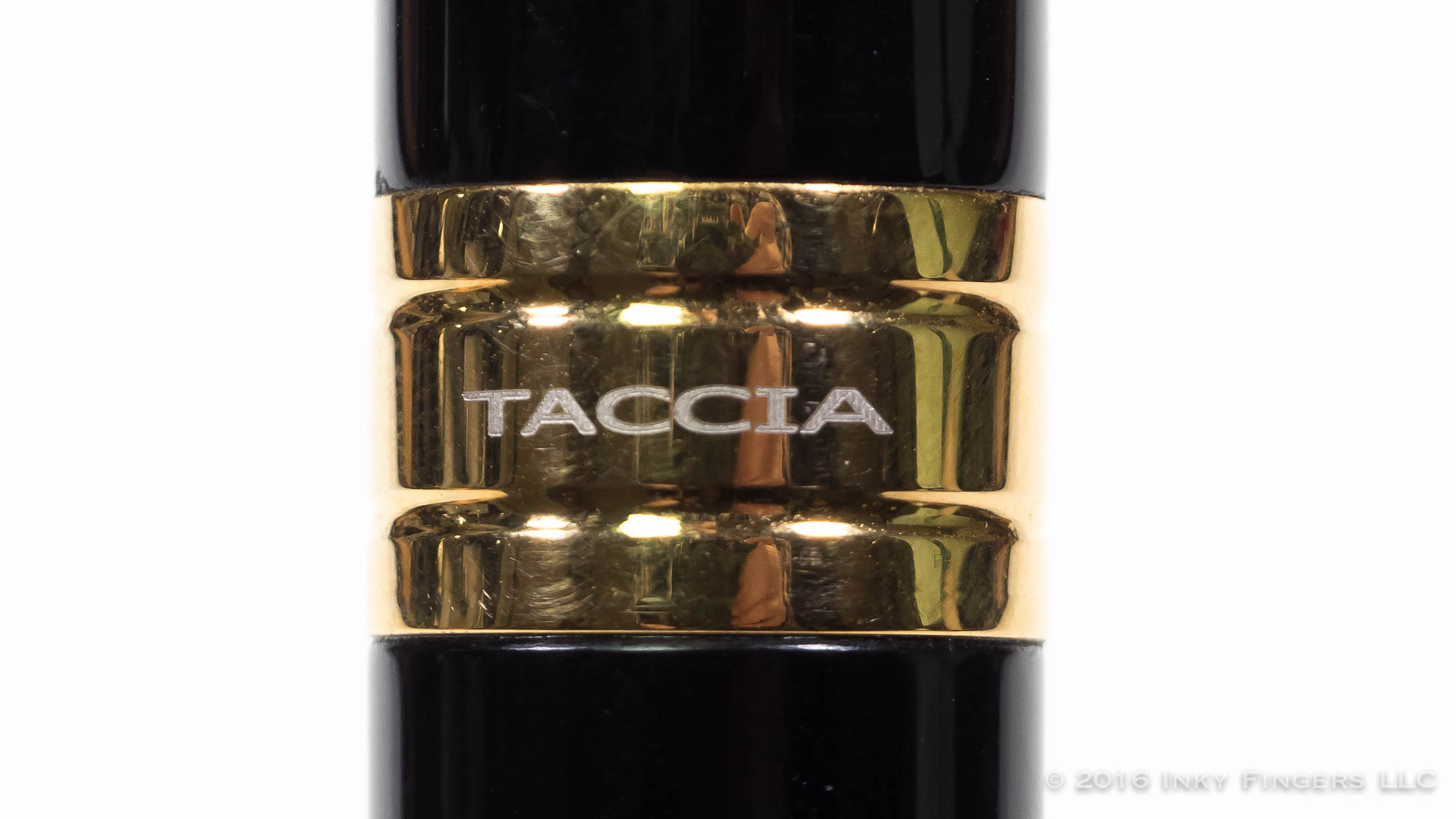 The clip has a vintage feel to it, taking its design cues from a rather art deco sensibility. It reminds me a lot of the design of the Kaweco Dia2 in that respect: modern, but with a vintage feel. 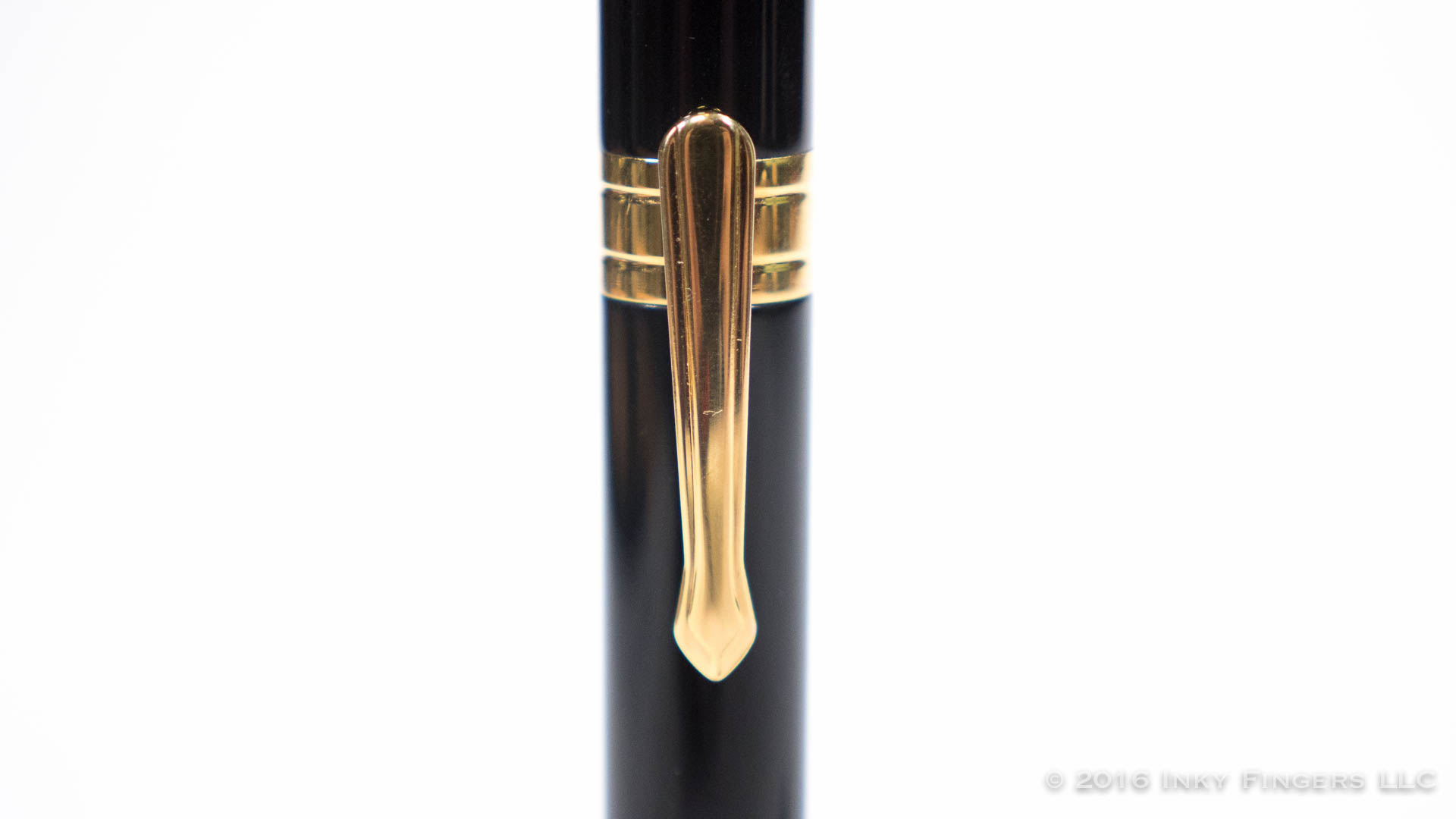 The cap sleeve comes off the pen with 2.5 turns to reveal a long, cylindrical pen body. The barrel is interrupted at the end by a gold band and a finial that looks like the nipple on a baby’s bottle. The finial is threaded to accept the cap sleeve for posting. (Posted, this pen is ludicrously large and rather ungainly, so I don’t recommend bothering with all that.) 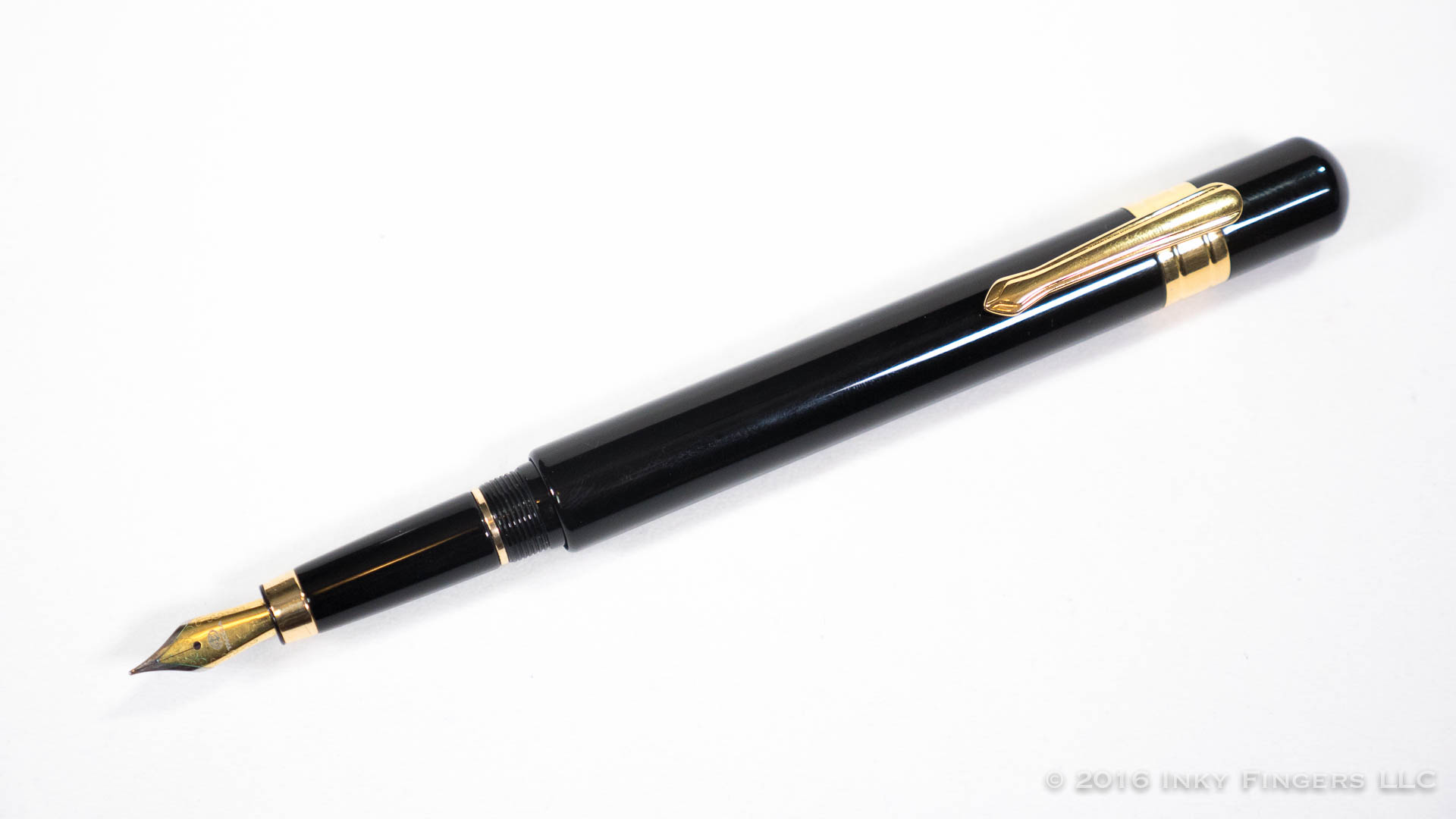 On the other end of the pen, the section is separated from the barrel and threads by means of yet another gold washer. The section on this pen is blessedly huge. This is one of the few pens in my collection where at least part of my grip doesn’t rest on the threads. Praise the Lord! The section also has a nice taper, in case you have smaller hands or want to find a narrower grip. 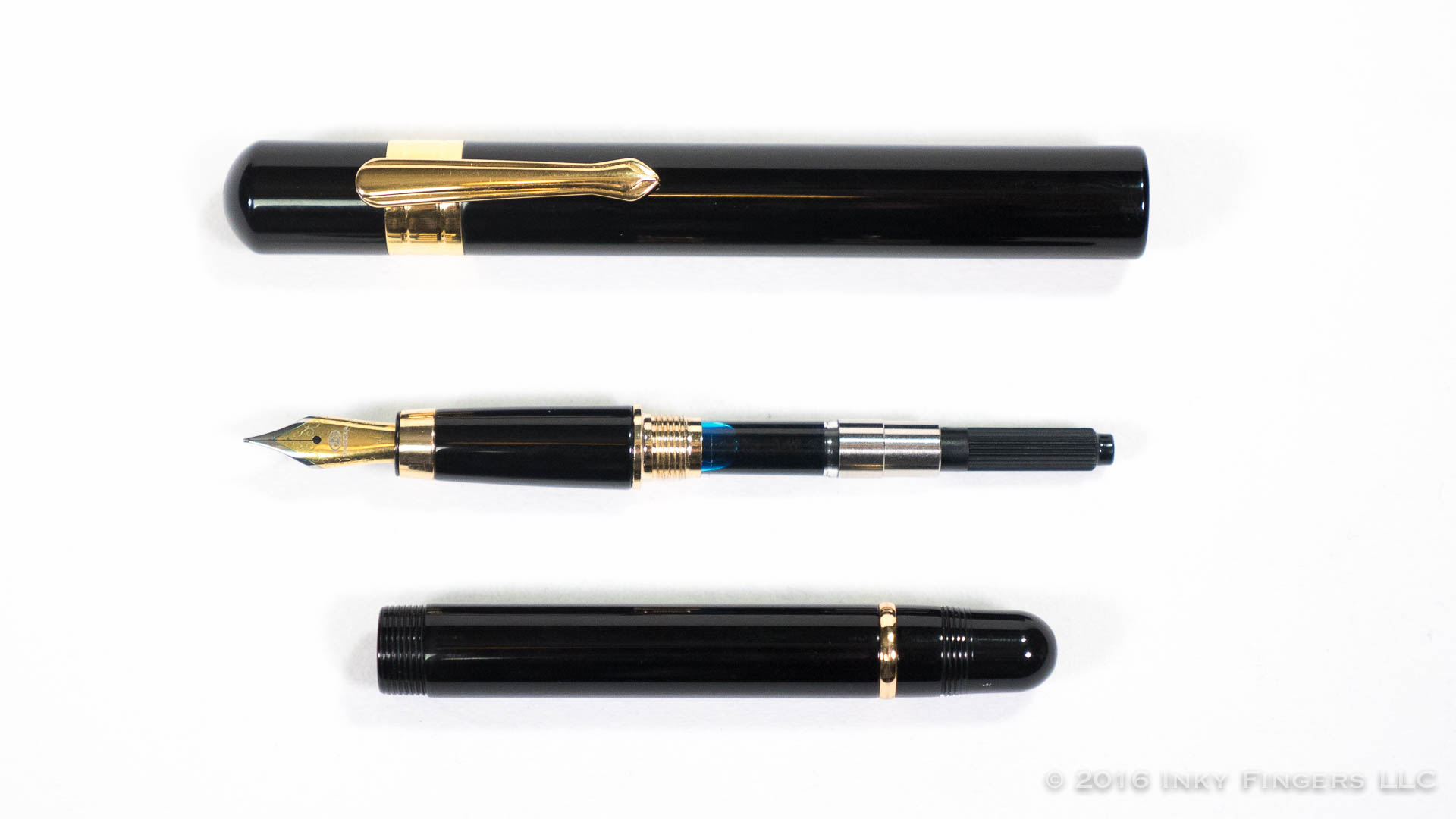 The http://penhabit.com/flirt-4-cam/ is a cartridge/converter-filled pen that can accept full-sized converters or long cartridges. (The pen comes with a converter.) The section’s tenon is metal, so I wouldn’t recommend trying to eyedropper this pen.

As mentioned earlier, many online reports seem to indicate that Taccia uses Jowo nibs. While I can not definitively confirm or deny this, I will say that the #5 nib and feed housing appear to be identical to other #5 nibs in my possession that I know are Jowo-made. 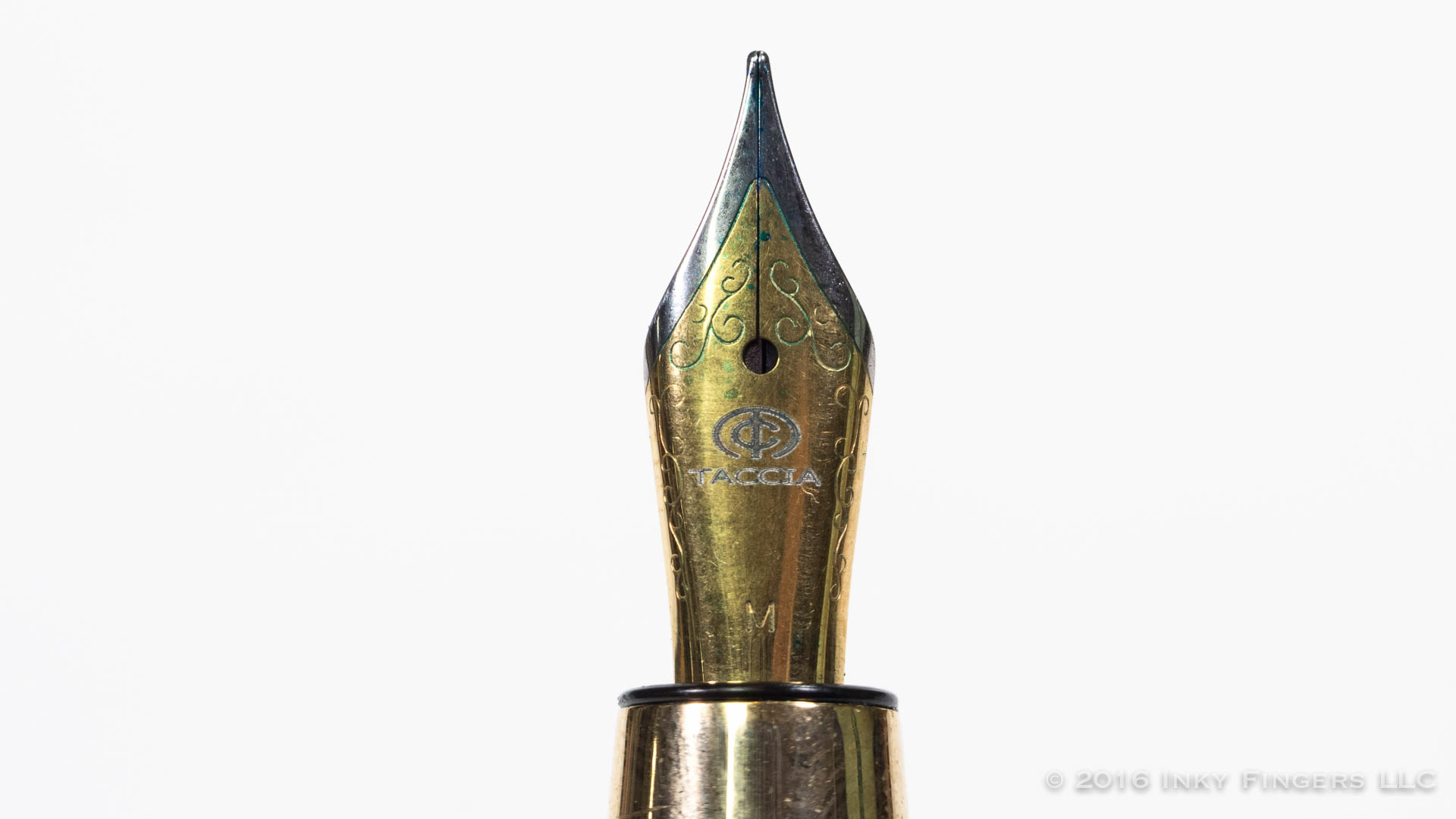 In terms of writing, my first experience with the Covenant was a little rough. This particular pen was a used model, and when I received it, the nib and feed were not well-aligned or properly seated. (You can see the feed slit off to the right through the breather hole in the photo above). I was able to fix that easily, at which point the ink flow improved. Generally, the pen wrote pretty well. The tines were in alignment and it was a smooth, relatively rigid writer. The polish on the nib tip, however, left the pen with a feedback that was somewhat akin to writing with a hard-leaded pencil on semi-textured paper. It wasn’t a tremendously unpleasant feedback, but it was more than I would generally prefer in my pens.

The pen also had a bit of a sweet spot, which resulted in a few hard starts if I didn’t have the alignment of the nib to the paper quite right. This, too, can (and will) be corrected with just a touch of work with some Micromesh™.

My nib issues were relatively minor in the grand scheme of things, and based on the reading of the brand I’ve done in researching this review, it seems that even my minor issues are relatively unusual. People simply glow about their Taccia pens, effusive in their praise for the nibs, especially.

In the hand, the pen is extremely comfortable thanks in part to that long, tapering section. Everything feels solid and well-built. The surface is nicely polished, the threads are smooth, the clip is springy. It’s a nicely-manufactured pen.

This pen lists at singles darwin for $129, with a retail price of $103. As a result, the http://penhabit.com/flirt-4-cam/ occupies a price point not many other pens occupy (at least here in the United States). Price-wise, it fits in that spot between TWSBI’s $60-$65 pens, and more traditional middle-tier, mass market pens like the Lamy 2000 or the Pilot Custom 74 or the entry level production line pens from Edison or Franklin-Christoph. Its unique-ish design helps it stand out a bit from the crowd, but the unusual form factor may not be for everyone. Minor nib issues aside, the pen was a great option for long-form writing, but the big cap made it a bit of a weird option for short notes or jotting ideas down.