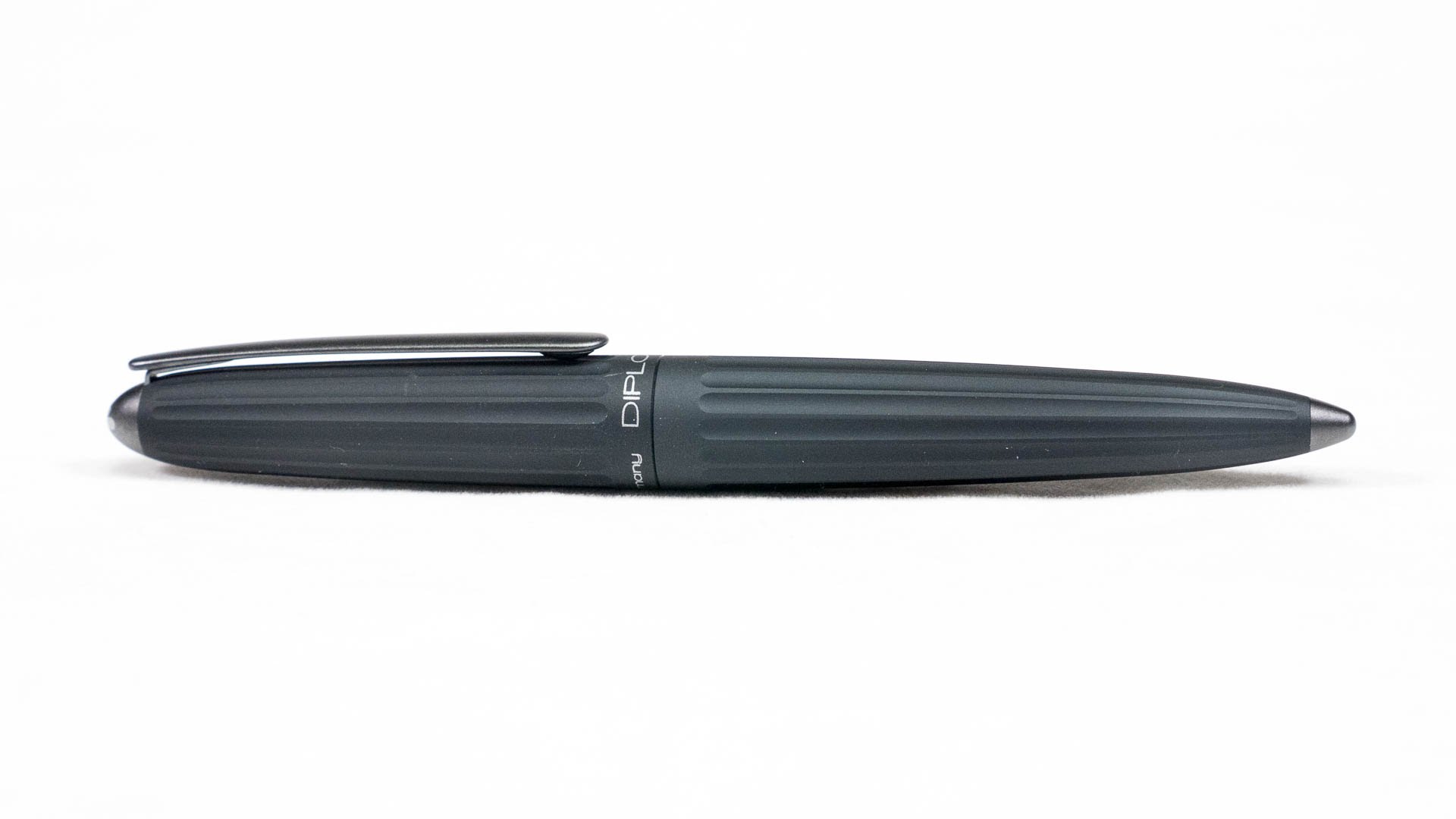 This pen was provided free of charge by meet singles in houston, in exchange for an honest review. No additional compensation was provided. In keeping with the Pen Habit Review Code of Ethics, this pen will be given away on The Pen Habit in a future blog post.

I love The Simpsons. I’ve watched every episode of the first 15 seasons at least a dozen times. It’s a real struggle for me not to infuse every single one of my reviews with dozens and dozens of quotes from the show. So, if you’ll allow me to give into my baser instincts, I’d like to paraphrase a Simpsons quote.

The fountain pen hobby lets me feel like Christopher Columbus: I discovered something millions of people did before me.

Every once in a great while, I feel like I am stumbling onto some hidden gem of a pen when I am really discovering something that has been around for a long time. Take, for example, the German brand, Diplomat. They have been around since 1922. I had heard of them, but I had never used one before. Nor had anyone in my immediate pen circle. Then, while at the LA Pen Show, I stopped by the Diplomat table to meet the brand’s US distributors, black dating sites dallas. (They are, by the way, a delightful and friendly group.) 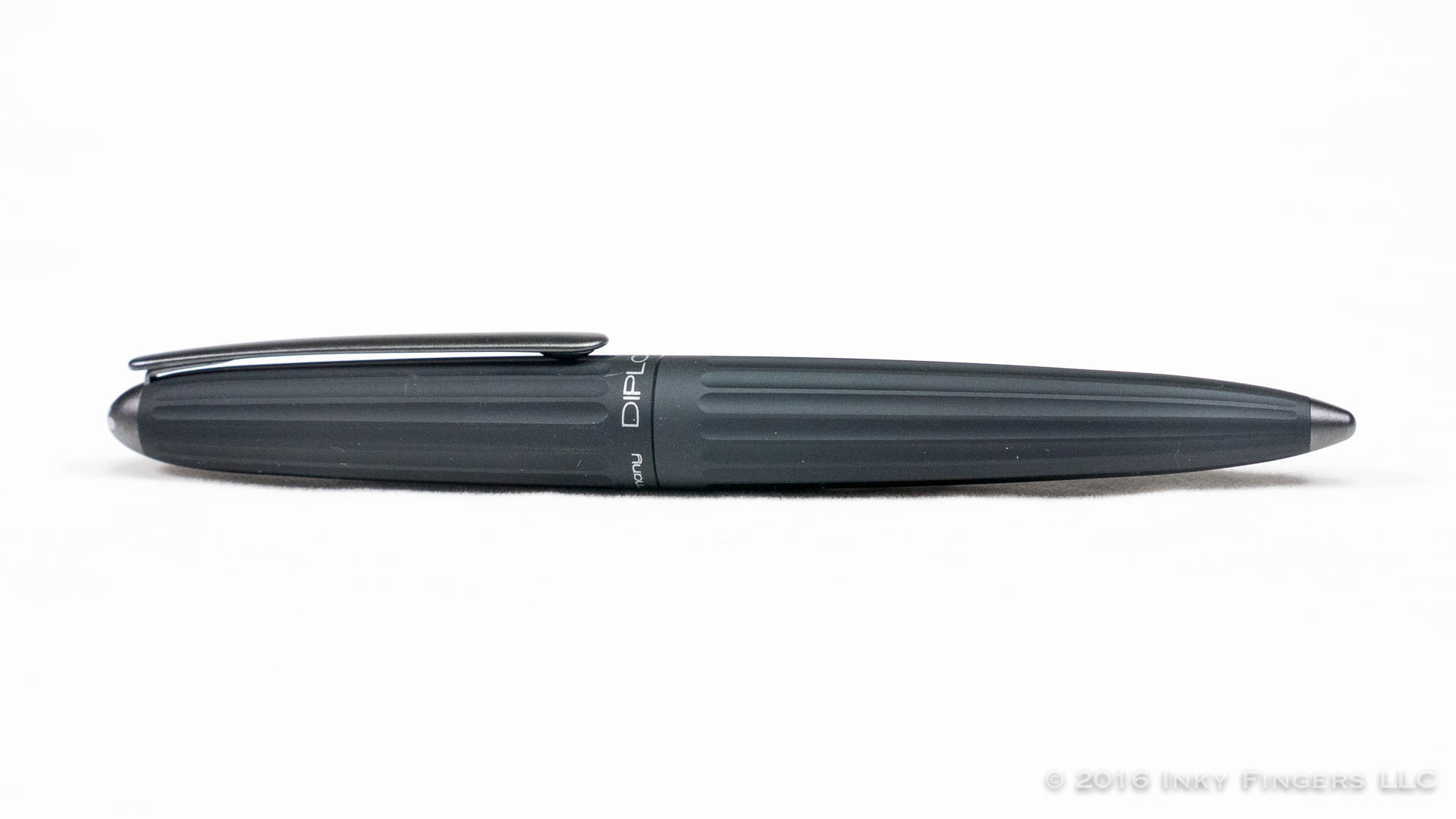 They provided me with one of their show offerings, the dating multiple people at once, for review purposes along with a bottle of Diplomat blue ink. The appropriately-named Aero is a beautiful, anodized aluminum pen shaped much like a zeppelin of old. When capped, the pen starts with a rounded point onto which the diplomat logo has been stamped in white. The ridged body swells toward the center, then tapers back down to another point at the end. It is a graceful, and somewhat unusual shape, but one that I find eye-catching. The pointed ends and the springy clip are offset by a lighter, satin-like anodization. The cap features a modern white font. 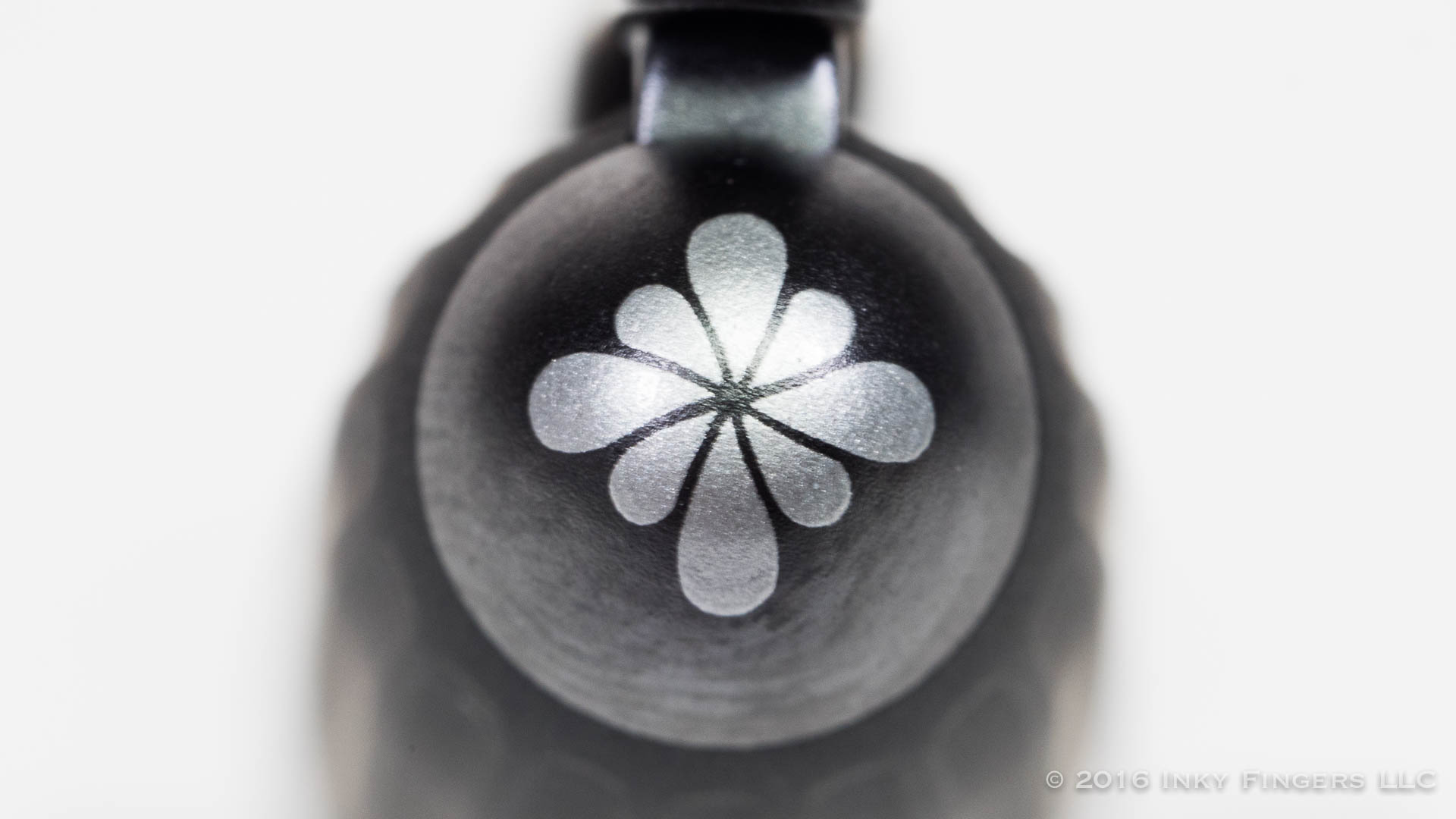 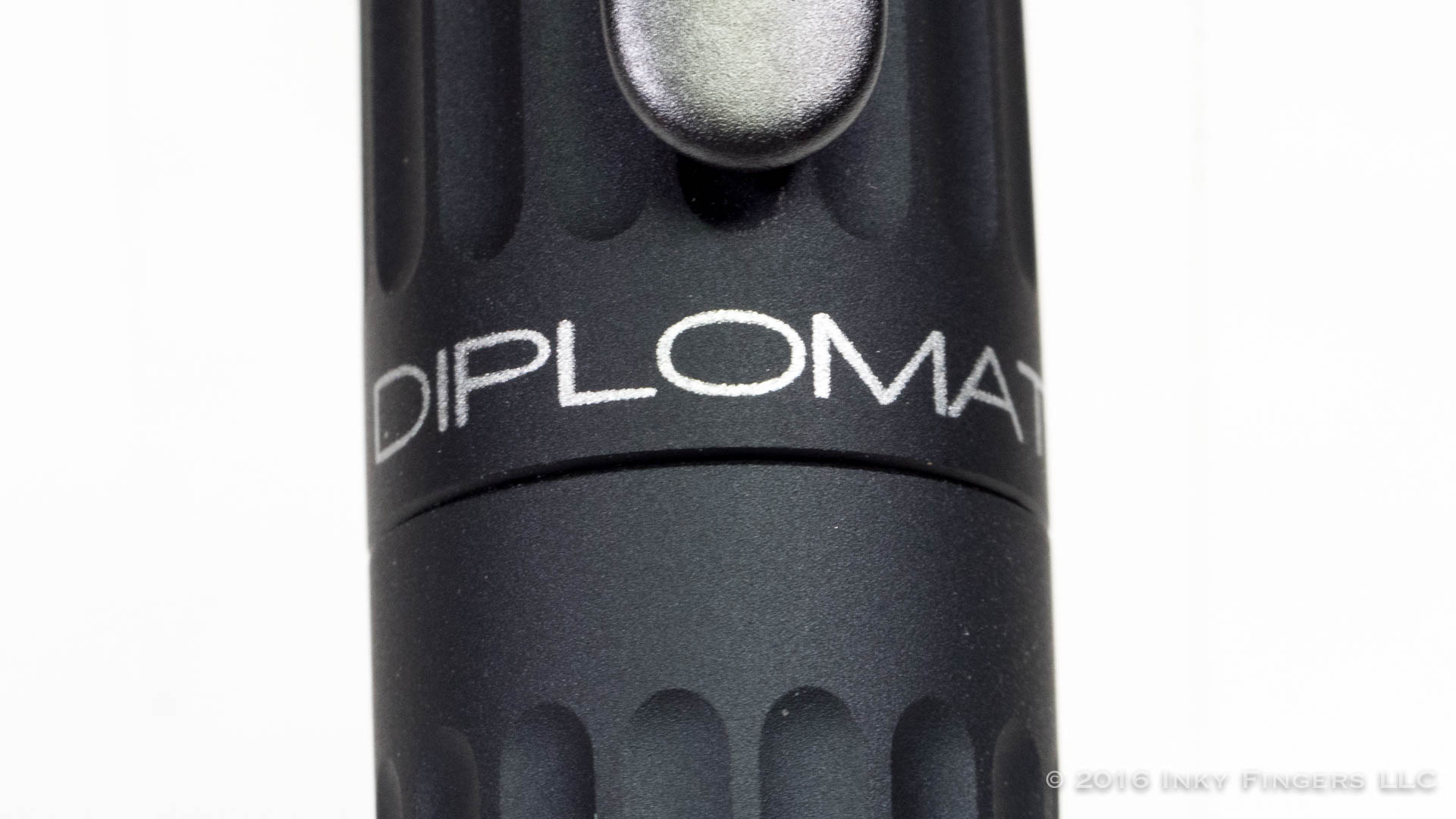 The cap pulls off to reveal a matte anodized section that matches the clip and pointed ends. The texture of the section has a lovely non-slip feel which completely overrides my general dislike of metal section. The section comes off on very smooth threads to access the standard international cartridge or converters. 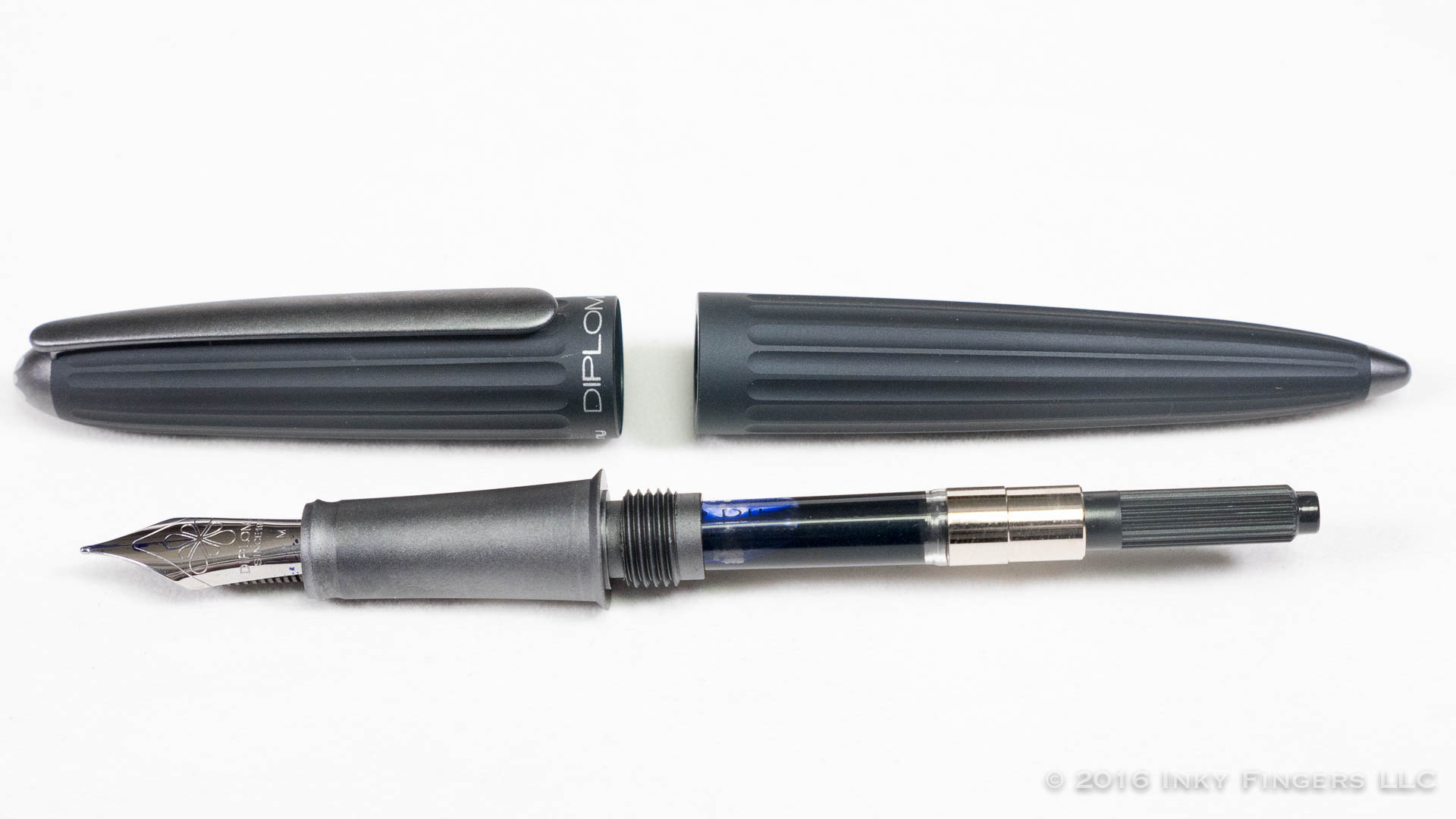 Design-wise, I love the look of this pen. It comes in both black/grey, matte brown, and matte silver. The black, almost stealth, finish is beautiful, but I find myself being continually drawn back to the brown version of this pen. (For many reasons, not least of which is that I don’t have very few brown pens in my collection and this one looks like chocolate.) The construction of the pen is very high quality, very precise. It feels solidly made; like it could stand up to some serious abuse. 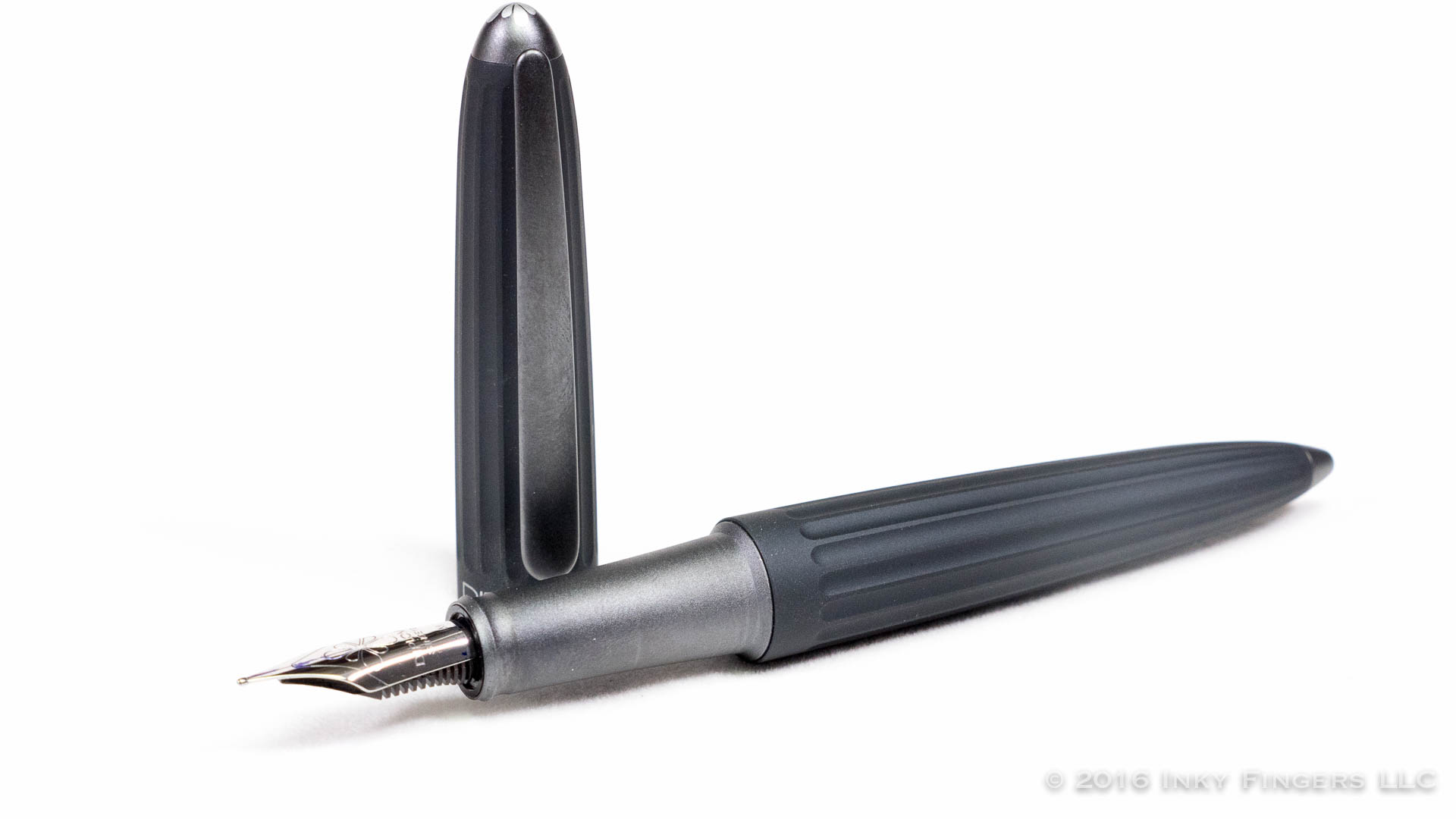 In the hand, this pen is surprisingly comfortable. The all-aluminum body is lighter than you might expect, and the swelling shape of the barrel puts the weight balance in precisely the right spot. It is long enough to be used without posting, but it is sized nicely to bridge the gap between the larger and smaller hands. And while there is a step down from section to barrel, the long section and lack of threads make for a very comfortable grip. 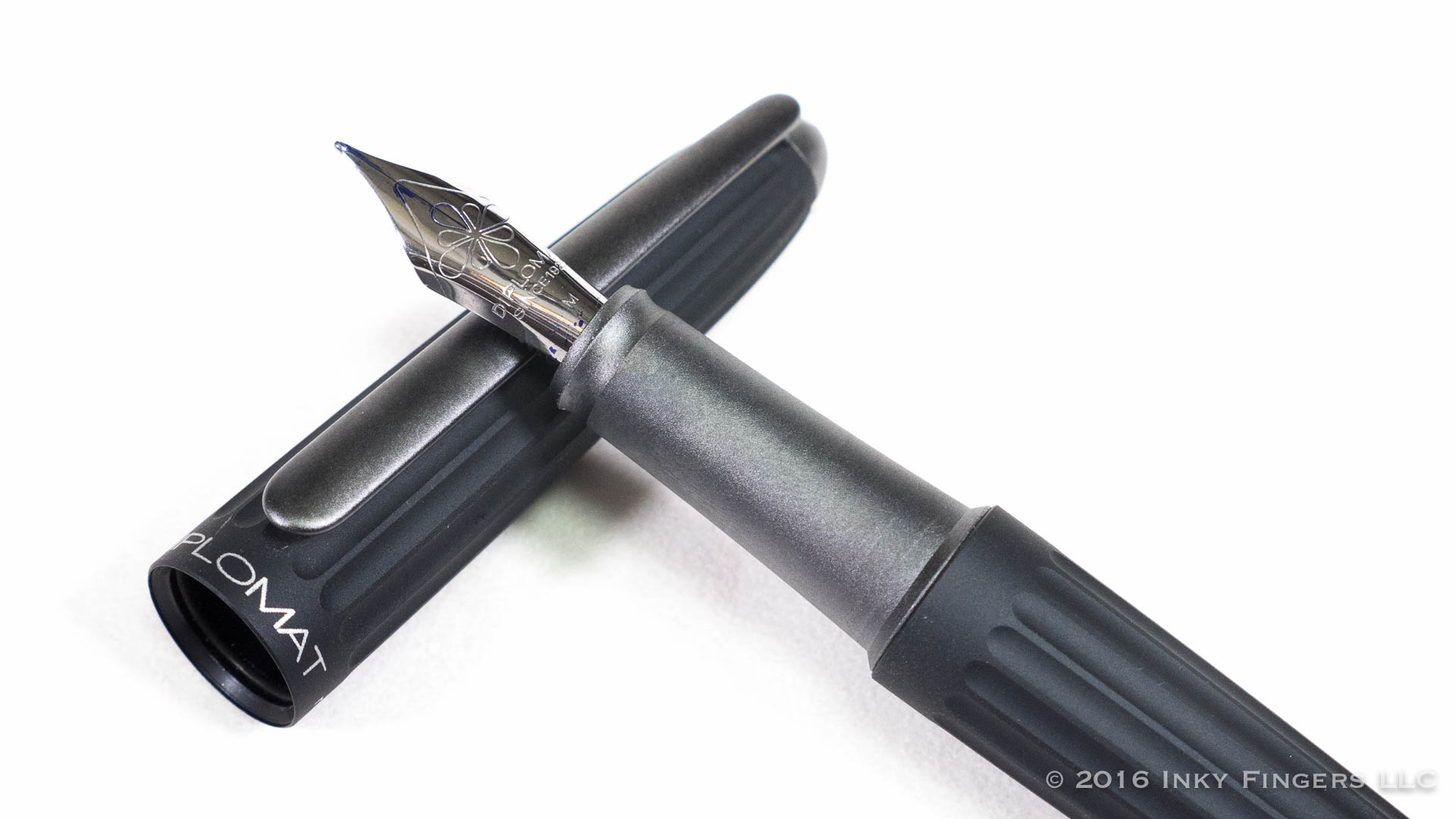 For you posters, the cap does post deeply, although only moderately securely. The deeper posting means that the pen doesn’t feel unbalanced or too long. If I were a pen-poster, this is a pen I would enjoy using posted. 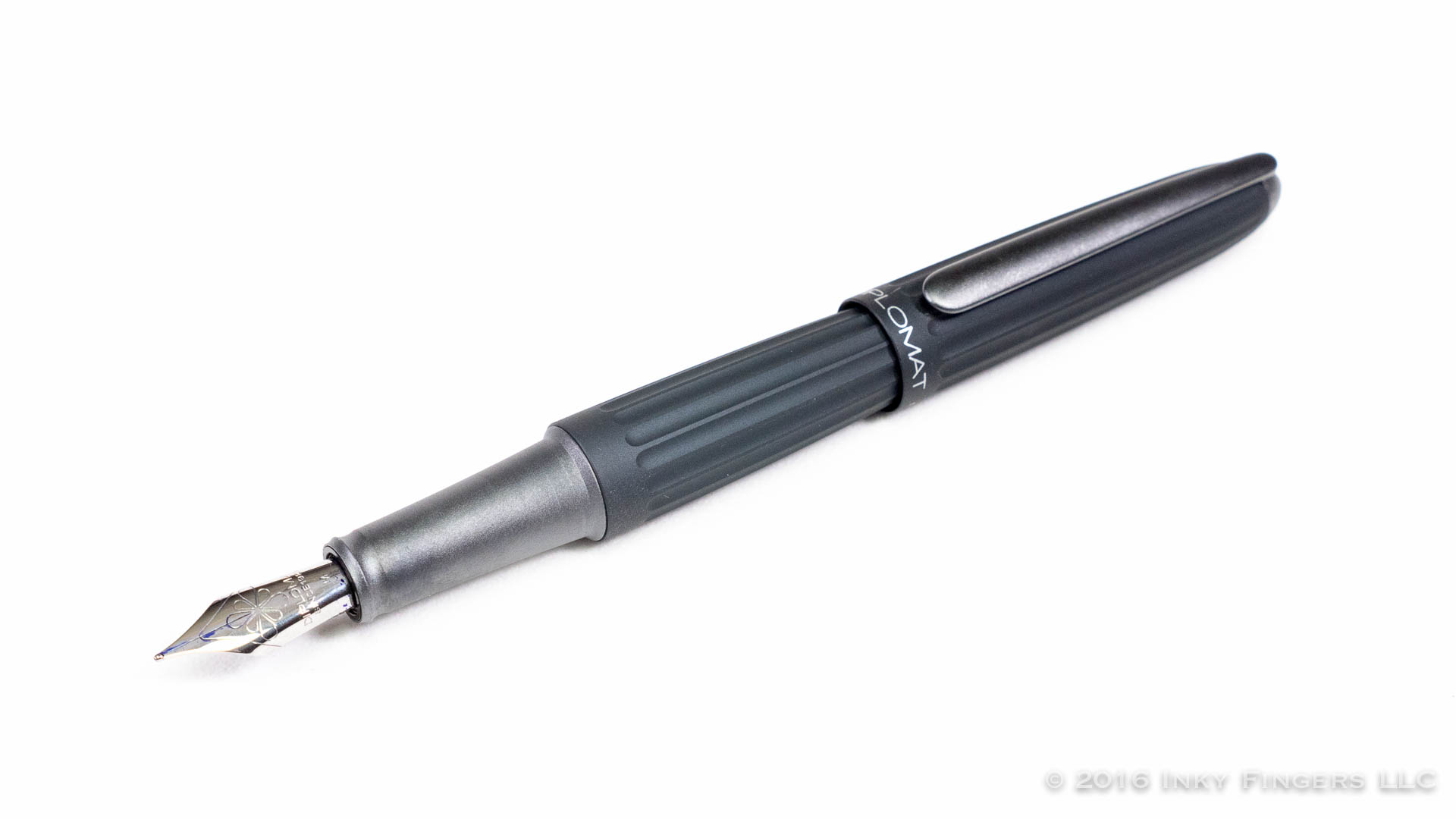 I really like the pen itself, but where this pen sings (almost literally) is the nib. I love the nib on this diplomat Aero. It is a medium steel nib, but interestingly, the nib’s reflection of the pen’s dark finish almost makes the nib look Ruthenium plated. (It’s not, though.) It is a #6 nib in the standard profile, but lacks a breather hole which streamlines the appearance somewhat. It features the Diplomat logo and the text “Diplomat Since 1922.” 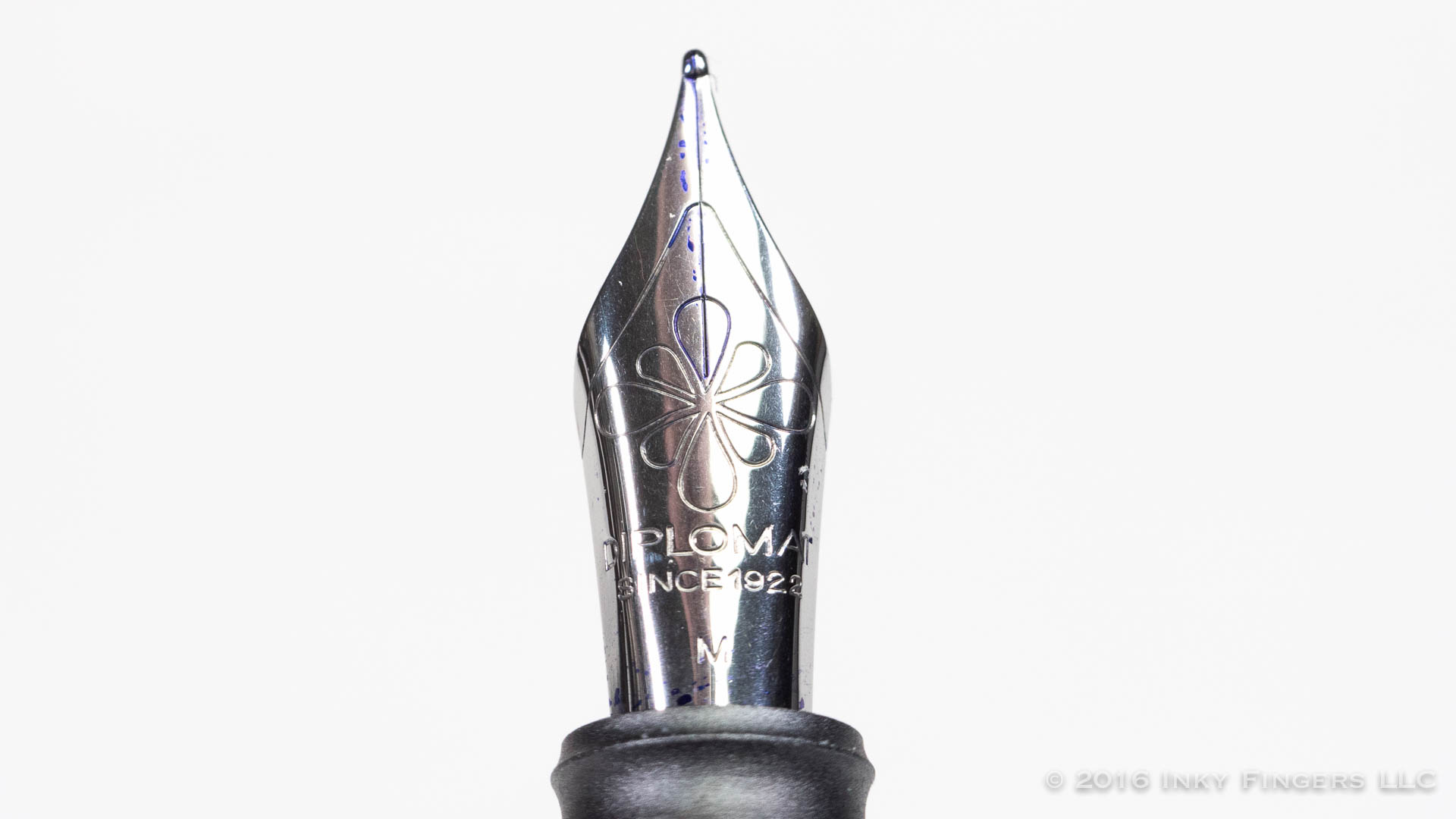 Diplomat has managed to do very, very good things with this nib. It is a touch on the dry side, but is beautifully tuned and quite smooth. (A 2 or a 2.5 on the Matt Armstrong feedback scale). The feed seems capable of keeping up with long writing sessions with only the barest hint of ink starvation. This nib is easily in the top five steel nibs I have ever used, and blows a lot of gold nibs out of the water too. 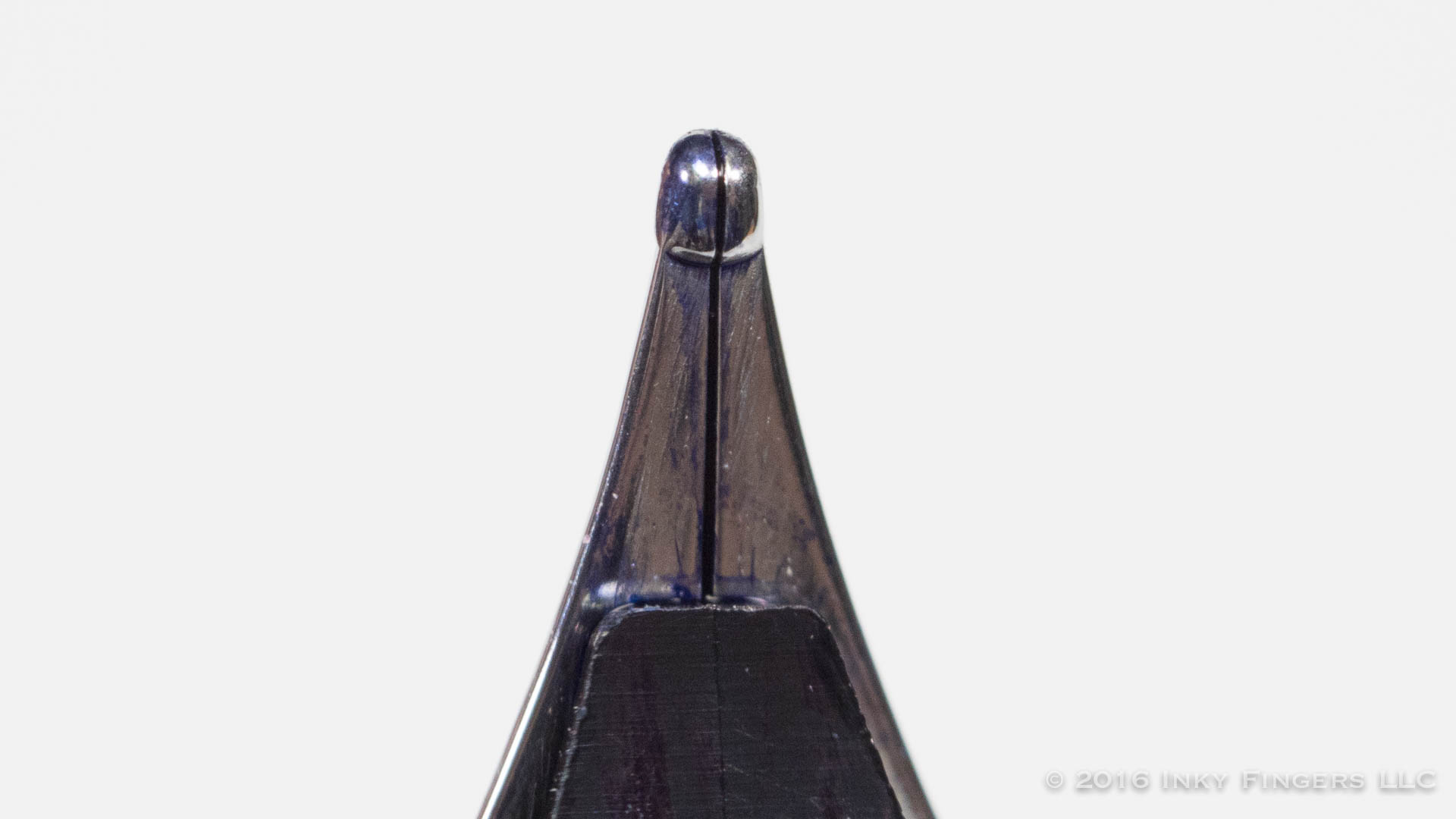 In the U.S., at least, not a lot of retailers carry the Diplomat brand. Considering how well these pens write, I found that just a bit confusing. At the time of writing this review, retailer iSellPens.com had the Aero on sale for $125. For me, $125 is more than a fair price for a pen that writes this well. However, the list price for this pen is $195, with a non-sale retail price of $156. At $156, this pen starts to compete directly with other gold-nibbed offerings from Pilot or Platinum, or the iconic Lamy 2000. It also starts to compete with steel-nibbed pens from Edison or Franklin-Christoph. I have no hesitation in saying that the Aero writes just as well, if not better, than any of the pens I just listed. It really is a superb writer. But at $156 (or higher) the price point does tend to get just a little trick when you look at the competition. It’s still worth it, in my opinion (as evidenced by the fact that I will probably end up buying one of these for myself–I like it that much.)