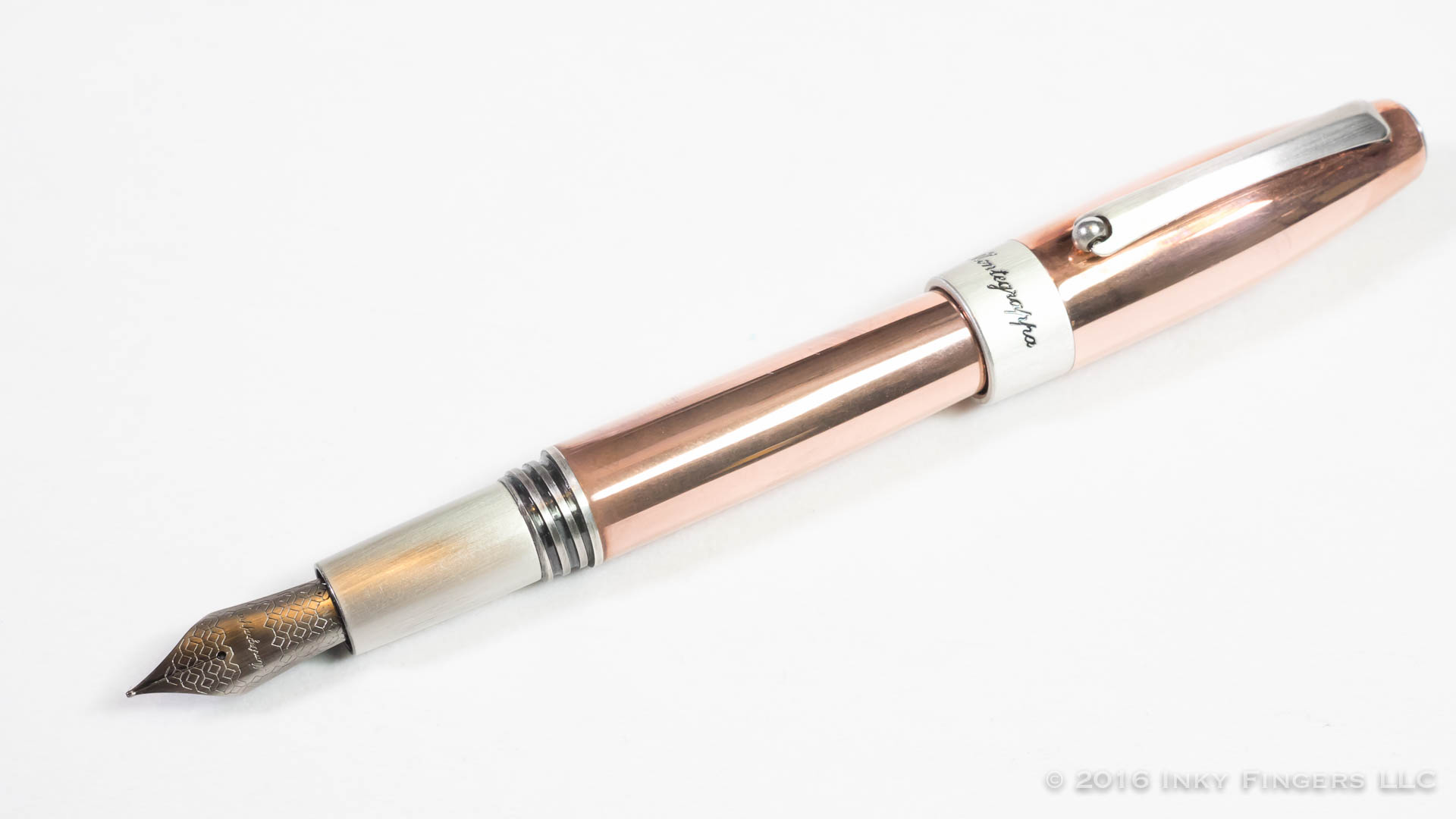 Thank you to Kenro Industries, the US Distributor of Aurora, Montegrappa, and OMAS (RIP) pens for providing this pen in exchange for an honest review. In keeping with the Pen Habit Reviewer Code of Ethics, this pen will give given away to Pen Habit viewers after the review.

Metal pens are not, generally speaking, my cup of tea. I am a person who prefers pens made of acrylics or resins or celluloids with a lot of depth and swirling colors. Every once in a while, though, I find a metal pen that speaks to me. The new Montegrappa Copper Mule is one of these. It is more than simply a pen made of metal; it is a pen where the metal is the star of the show. 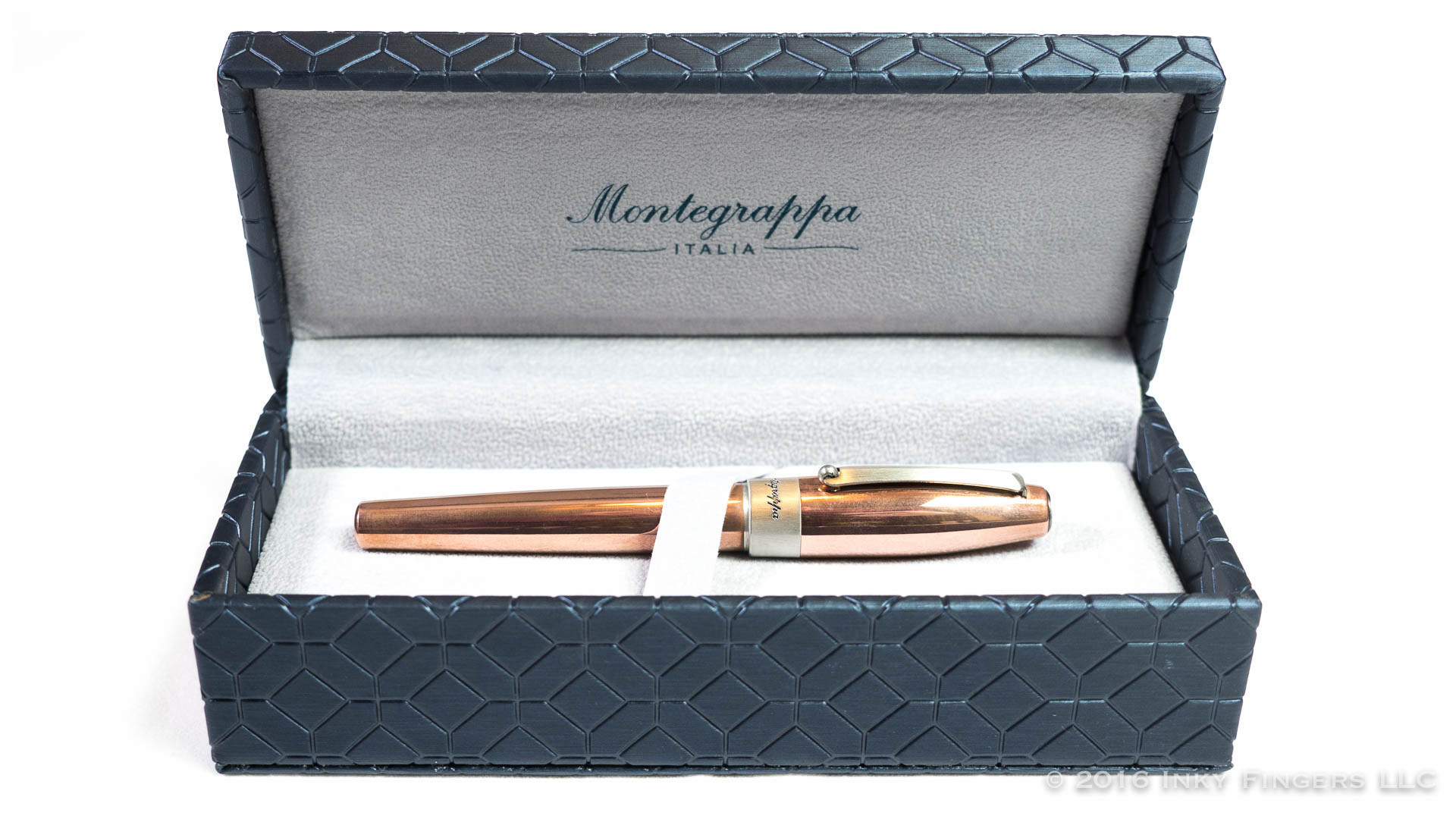 As you might suspect from the name, the Copper Mule is a pen made of bright, shiny copper with brushed steel accents. The body style is based on Montegrappa’s Fortuna line, a line of pens that I have reviewed (and liked) before. The copper version maintains the clean lines of the white and ruthenium version I reviewed previously but grants the pen more color, depth, and luxe through the copper of the cap and barrel. 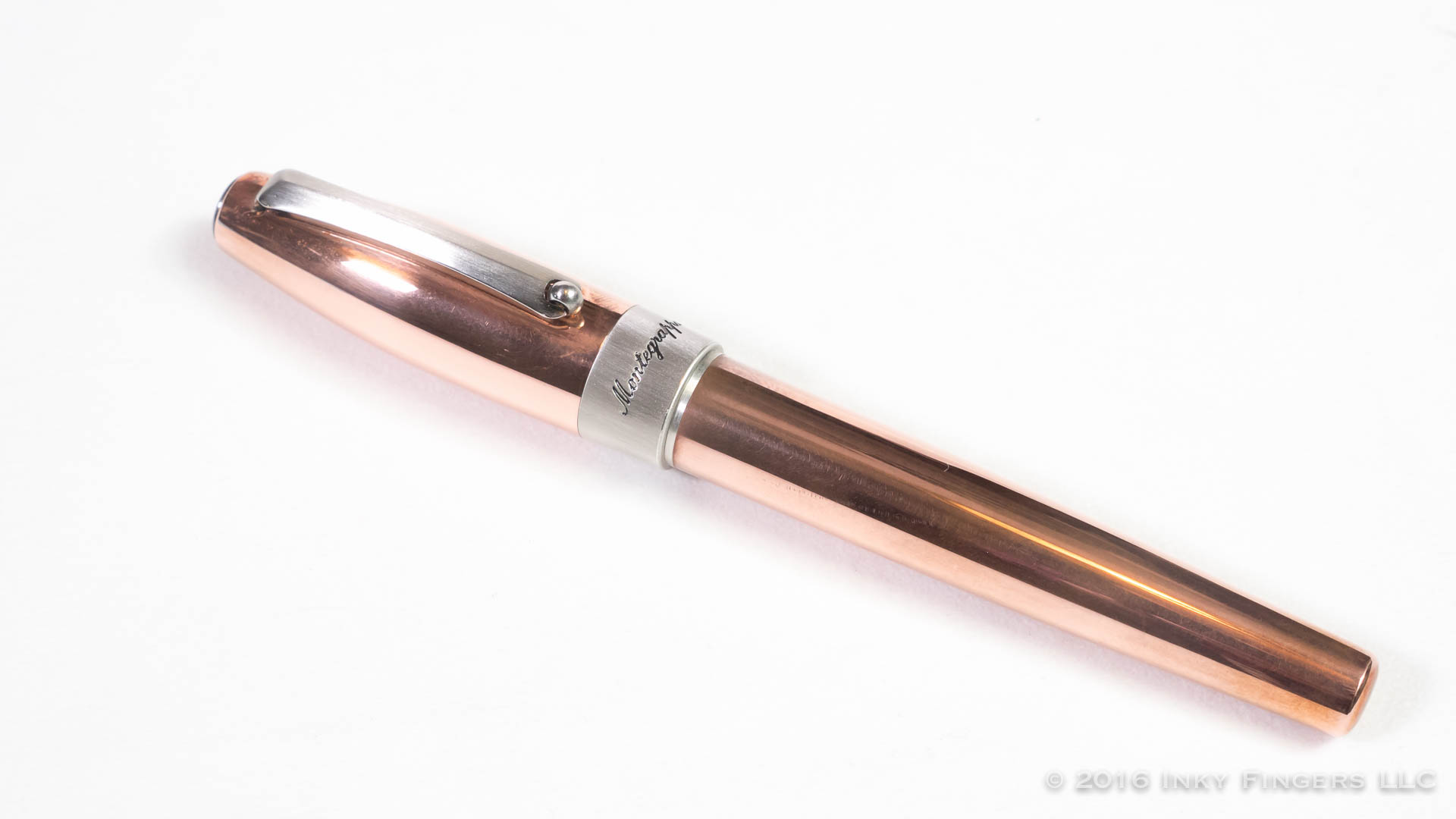 Copper is a fascinating metal. Polished, it is bright & shiny—gold with a red undertone. As it tarnishes, it develops a deep, rich patina with more motion and depth, coupled with a darker, ruddier complexion. Out of the box, the Copper Mule is near blinding in its shine. The high-quality pen coffin comes with a couple of polishing clothes to help you maintain that shine, but attempting to do so is something of a losing battle. The highly-polished surface picks up fingerprints like they’re on clearance. To maintain that shine, you’d have to spend more time polishing the pen than using it.

Depending on the chemistry of your skin oils, those fingerprints will start to tarnish the copper almost immediately. I found the patina very difficult to polish away on my pen, until one of the members of the Pen Addict Slack suggested that I use a bit of vinegar. A splash of white vinegar on a rag and a little bit of elbow grease, and the copper shined right up. Even without polishing the pen, though, I found the gradual darkening of the patina to be just as (if not even more) attractive. Since the patina develops irregularly, you get a bit more motion and texture to the surface over time, resulting in a really lovely color. 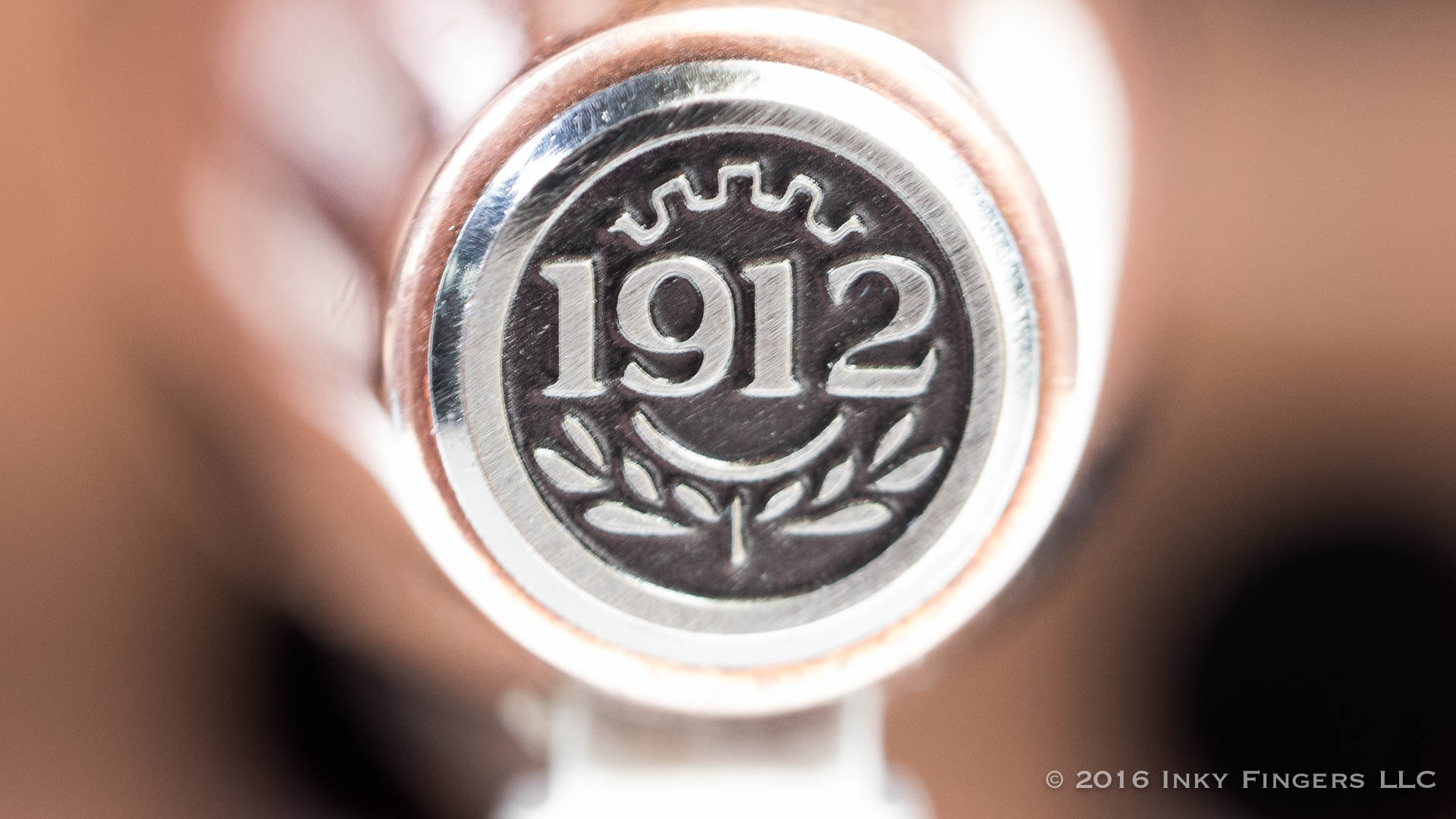 The cap is topped with the Montegrappa 1912 medallion in steel, inset into the copper. The cap flares out into a rather bulbous shape from there. The brushed steel clip attaches via a slit in the cap wall, and features a clean, streamlined design which terminates in a roller wheel. The clip is extremely rigid, and very strong. You might have a hard time clipping it to anything, but once it is there it isn’t going anywhere. The cap band is a wide band of brushed steel featuring the name “Montegrappa” in black, enameled script. 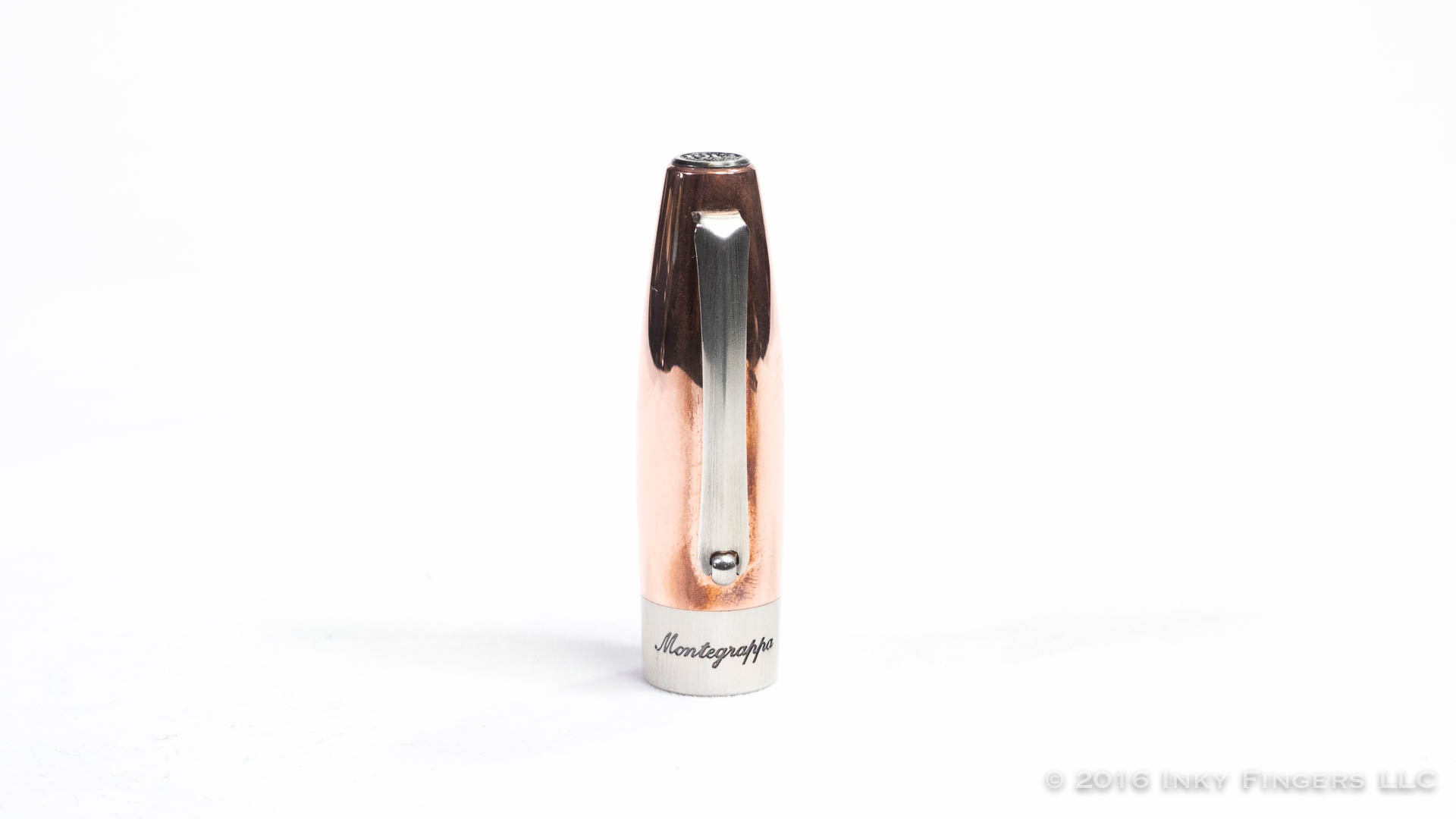 The entirety of the cap’s interior is lined with a heavy white plastic inner cap. This very wise move on Montegrappa’s part means that the pen’s block threads do not mesh metal on metal–a big plus in my book. The inner cap also prevents the barrel’s copper surface from getting marred by over-zealous posting, if that’s your thing.

The rest of the pen body is a single, solid rod of copper that tapers to a flat end point. It is a clean design, with just enough contrast in the steel accents to provide visual interest without distracting from the real star of the pen: the copper.

The cap unscrews in 1 1/4 turns on surprisingly smooth block threads. I am usually not a fan of block threads, as they are often quite loose, not secure, and don’t mesh smoothly. The block threads on the Copper Mule are well-machined and treated with some substance which helps lubricate the meshing of threads and resulting in a very smooth, tight fit. Under the cap is a longish brushed steel section, which is very minutely tapered and convex for a nice, ergonomic feel in the hand. 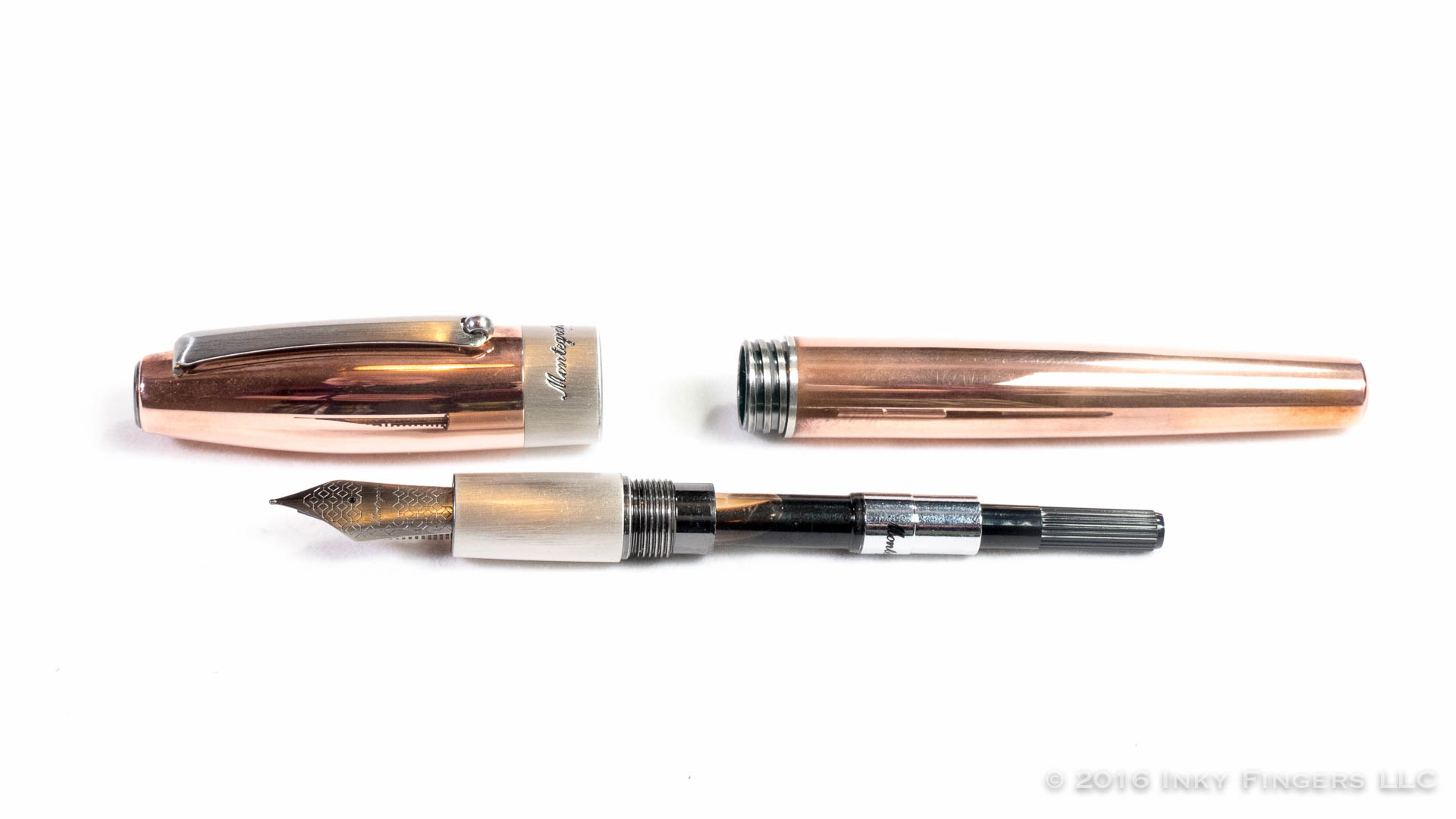 In terms of looks and fit in the hand, I’m thoroughly in love with the Copper mule. It’s a gorgeous pen, and very comfortable for long writing sessions. It’s got some weight, but not so much that it feels exhausting to use the pen. 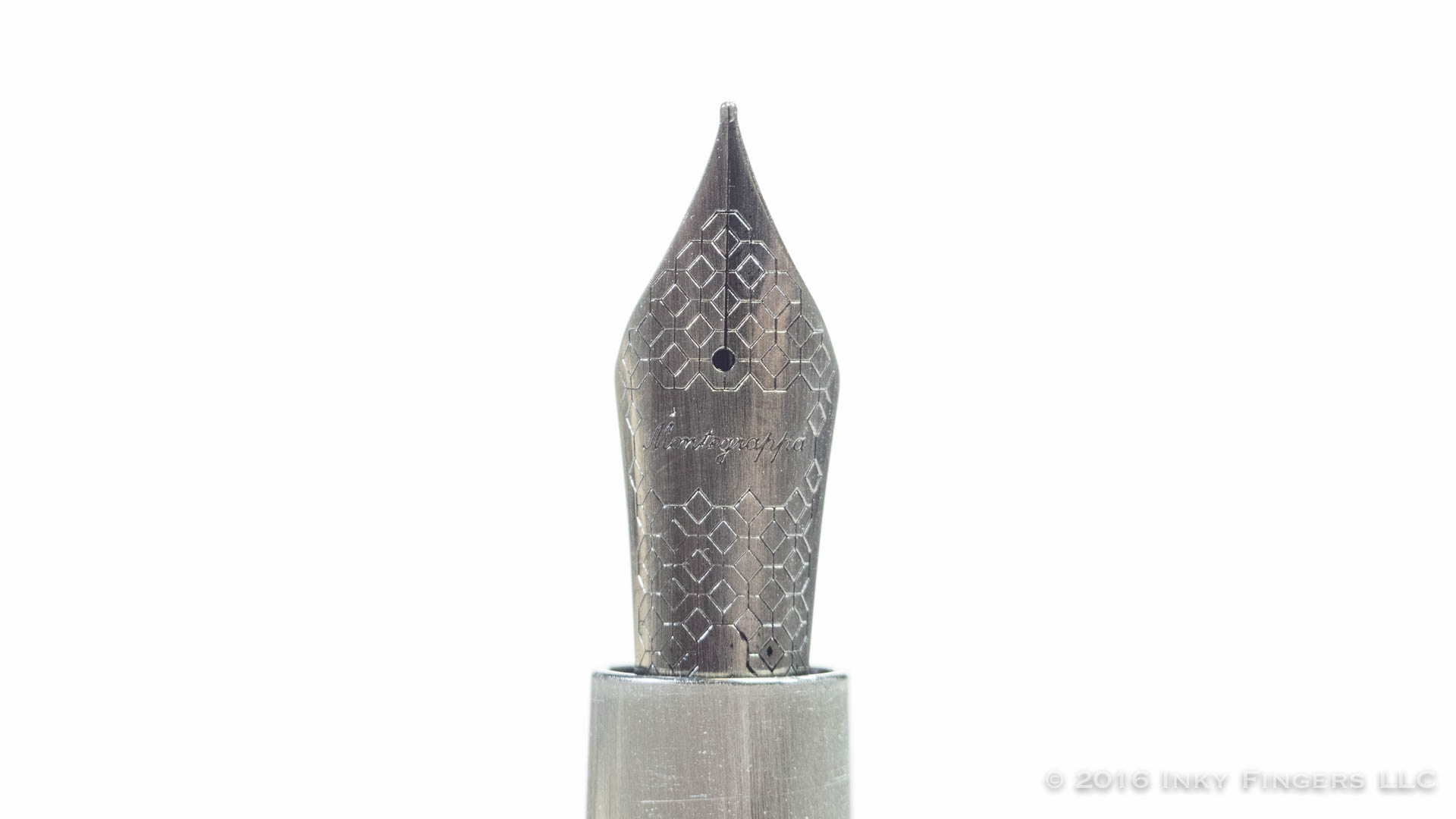 I have used three Montegrappa medium nibs: one on a Montegrappa Espressione, one on the White and Ruthenium Fortuna, and now one on the Copper Mule. All three have been very similar in terms of writing characteristics, so I feel pretty confident in ascribing the Copper Mule’s writing performance to what feels like brand consistency. First, the nib is quite rigid. There is no real bounce or line variation. Second, it produces a much finer line than you might expect from a European pen–the nib tends to be more consistent with a Japanese medium. Third, it provides a higher-than-usual amount of feedback (around a 5-6 on the MAFS). Fourth, the nib is ground to a somewhat stub-like quality. 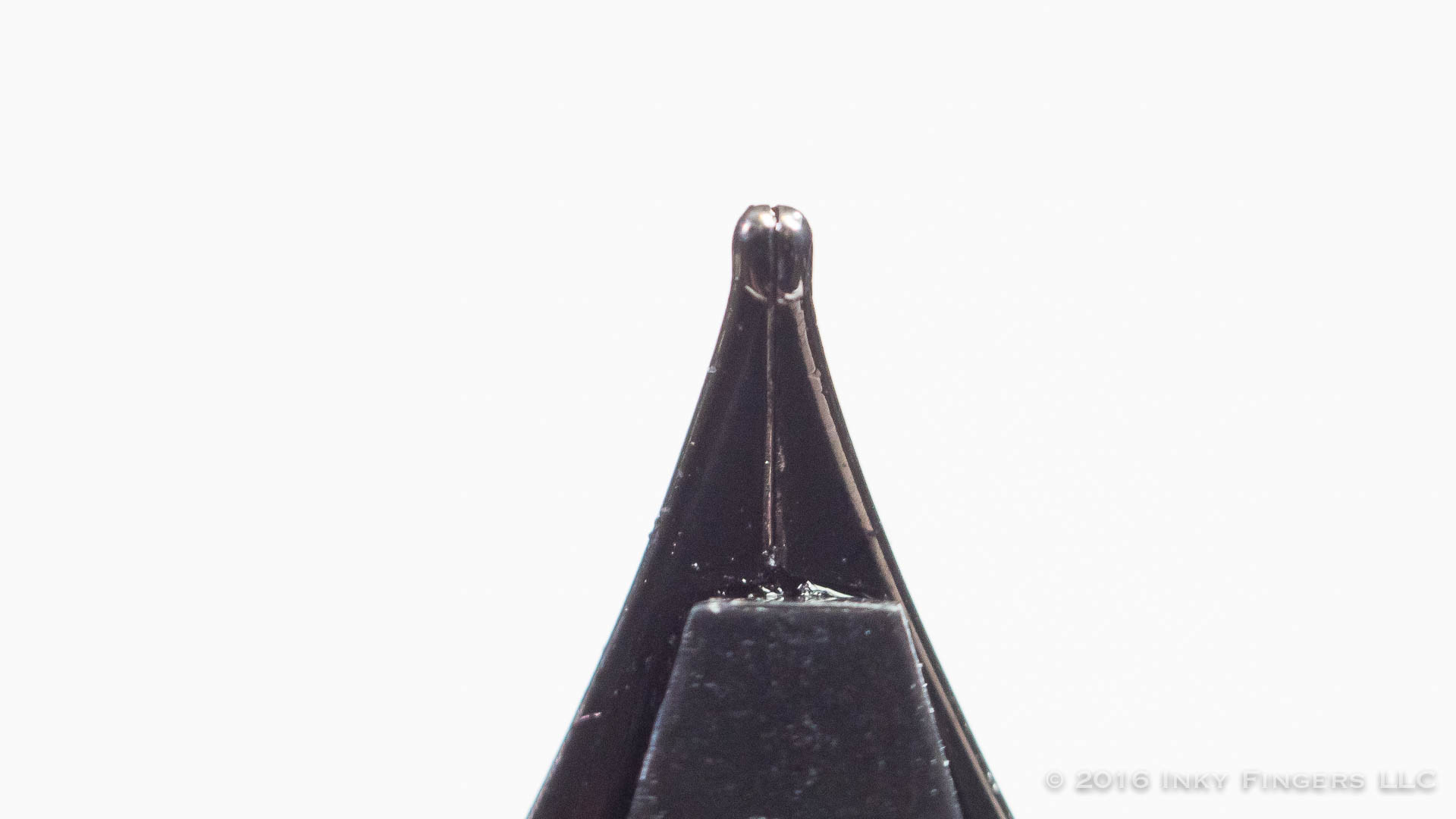 These features come together to create a rock-solid, consistent writer that nevertheless has a consistent brand character. It is well adjusted, and the tines are in perfect alignment. I never had issues skipping, hard starts, or ink starvation. In that respect, I couldn’t be happier with the pen. But taking my own personal preferences into account, I think I would enjoy a slightly springier, smoother nib with a wetter ink flow.

That’s not to say I don’t enjoy writing with this pen; I do. The Copper Mule fit beautifully in my hand, whether posted or not. The additional weight, which is the understandable result of a metal-bodied pen, was wonderfully balanced. Tthe wider section helped prevent over-gripping. And once I got over the natural aversion to fingerprints on the surface, I really began to appreciate the pen’s beautiful patina. 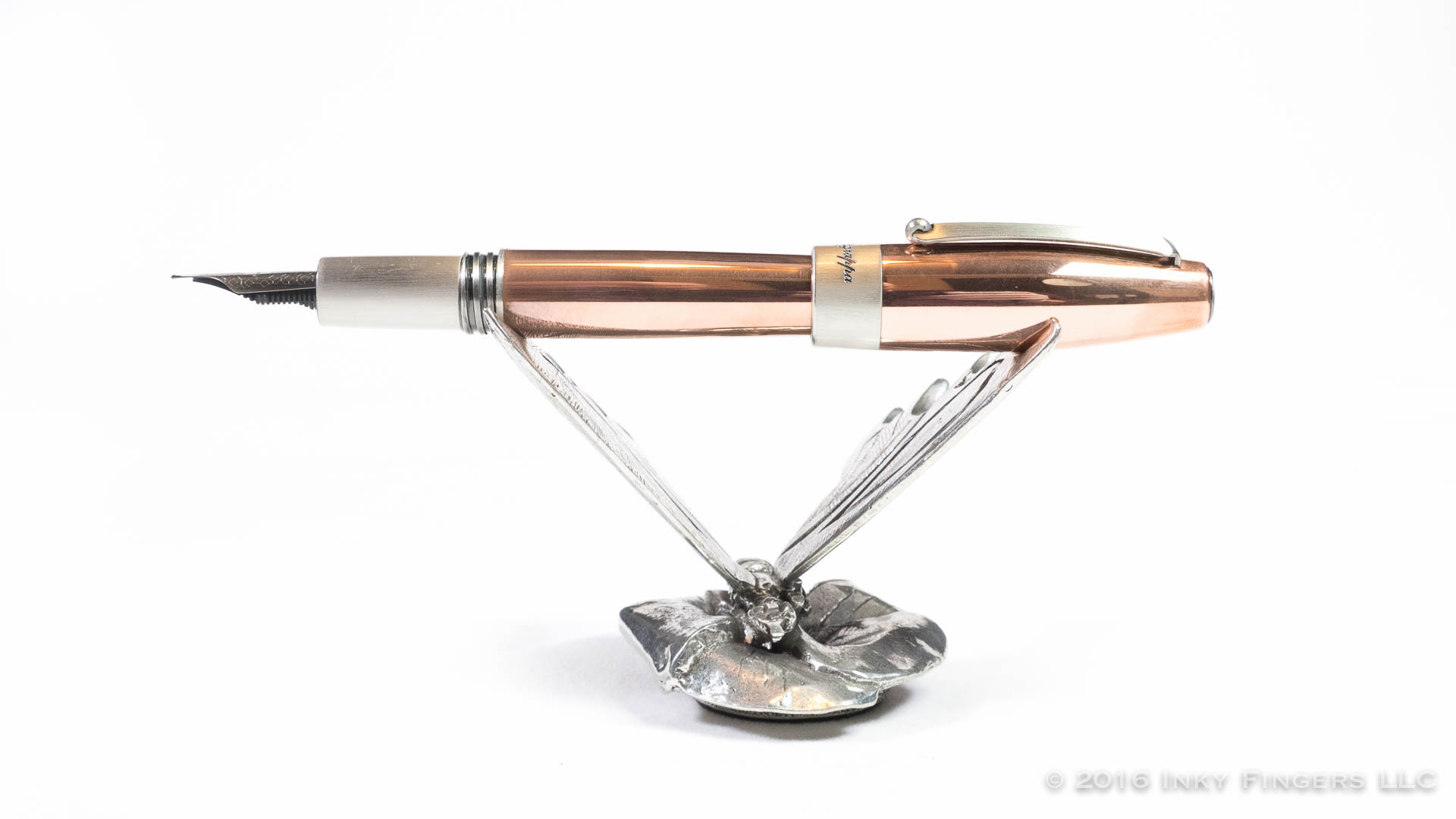 With a list price of $375, and a street price of around $300, the Copper Mule is a pretty expensive pen—especially for one with a steel nib. (It does come with an accompanying copper mug as well, while supplies last.) Now, I’m not one of those people who believe that any pen over $x needs to have a gold nib. The material of the nib in and of itself is not enough to determine the pen’s value or its writing characteristics. With the Copper Mule, I like the shape and design of the pen. I love the materials it’s made from. I even like the feel of the pen in my hand. With some slight tweaks to the pen’s writing characteristics (all of which I feel comfortable doing) $300 would be on the high side of the range I’d be willing to pay, but still doable.

I mean, how often do you get to own a copper pen?