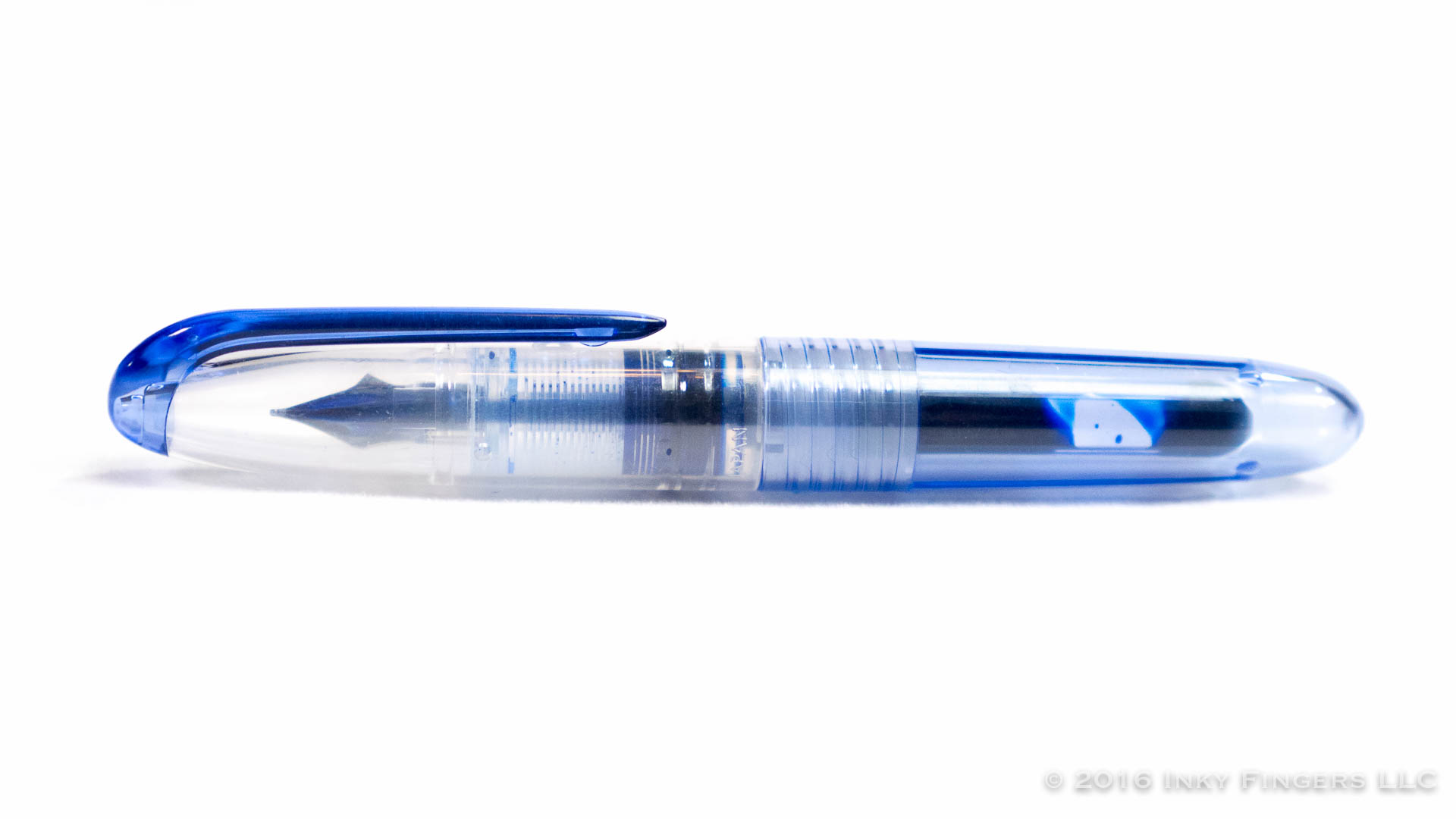 I don’t understand “disposable” fountain pens at all. You get all of the hassles of fountain pens without any of the benefits. For me, fountain pens are fine writing instruments. They’re supposed to be nicer, result in a better writing experience, than you can get with any off-the-shelf drug store pen. I mean, let’s be honest: part of fountain pens (for me) is the feeling of smug elitism you get from writing with a perfectly tuned nib on premium paper while watching others attempt to manhandle cheap plastic pens across an equally-as-cheap yellow legal pad. I came into this hobby believing that fountain pens are/should be high-quality tools meant to last for years or decades, not cheap office supply store fodder in blister packs. They should be something more than the same old plastic they give away for free at your bank.

That’s one of the reasons why I have never been tempted to “review” super low-end fountain pens. What’s the point? How the pen writes is almost irrelevant. But as is often the case when I have a firmly-held (if somewhat ignorant) opinion, expanding my horizons often forces me to re-evaluate my position and change it slightly. That’s what happened when I received a pack of Pilot Petit1 Pens from a couple of Pen Habit viewer. 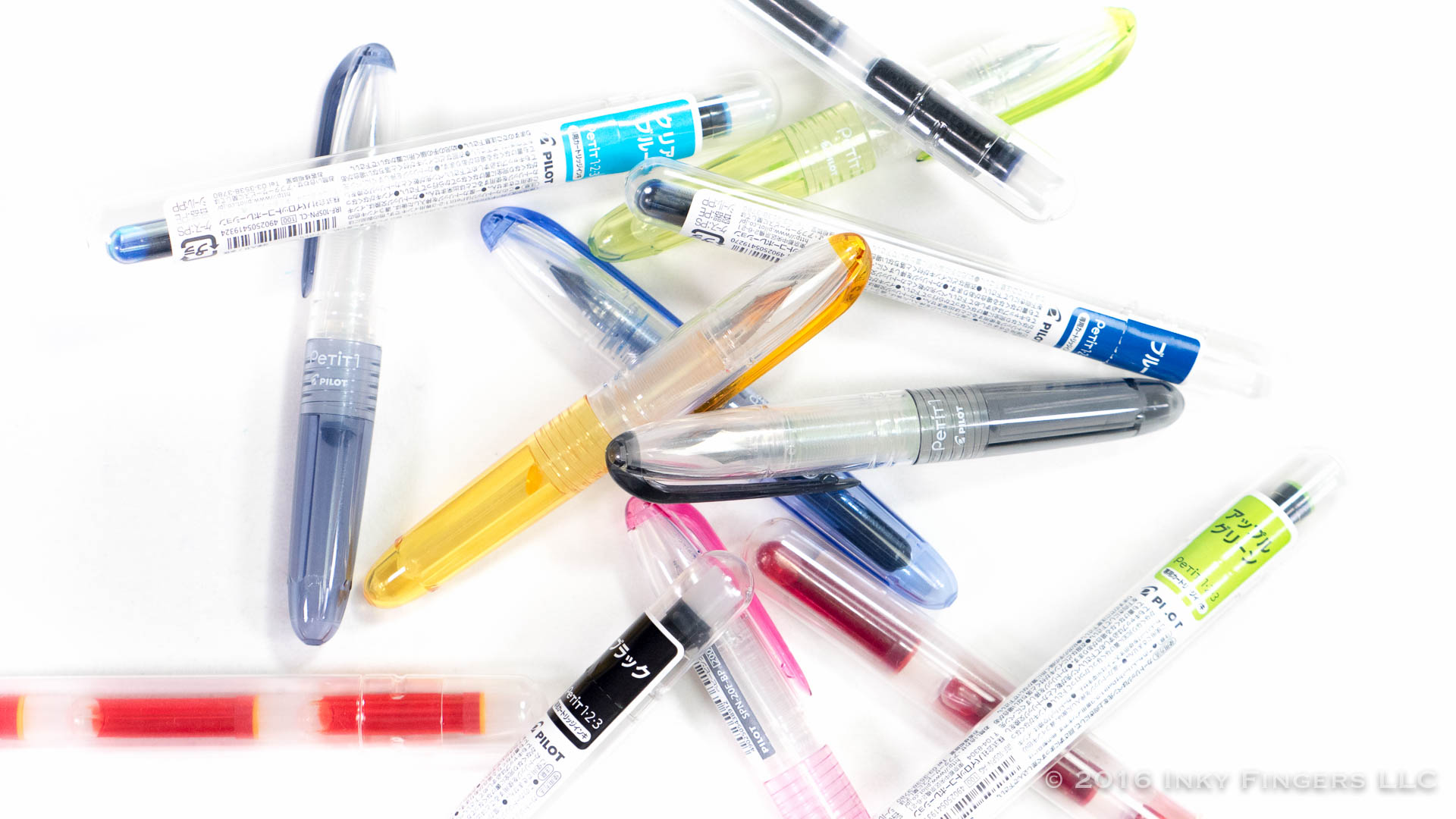 I’m not sure it’s possible to design a pen less likely to appeal to me. The Petit1 is a very inexpensive ($3.80 from Jetpens) pocket pen in nauseating candy-colored plastic more at home with the Hello Kitty set than with me. They are ridiculously small, sickeningly “cute”, and scream of all that is wrong with “disposable” pens. To make matters worse, not only do they take proprietary cartridges, but their cartridges are proprietary to that pen only. There is not a whiff of class or distinction about them.

The short little Petit1 has a torpedo-shaped profile. The cap of the pen is made of transparent plastic. The pen’s color comes from its barrel and matching plastic clip, which are also made of transparent plastic, with just a tint of the My Little Pony color palette thrown in. The pen’s clip is flimsy and easily breakable, but would do the job of holding the pen in place on a pen loop or shirt pocket. (Although putting this pen on your dress shirt pocket would be ridiculous-looking.) The cap and the barrel are flush with each other. The colored barrel has the words “Pilot Petit1” printed in white. 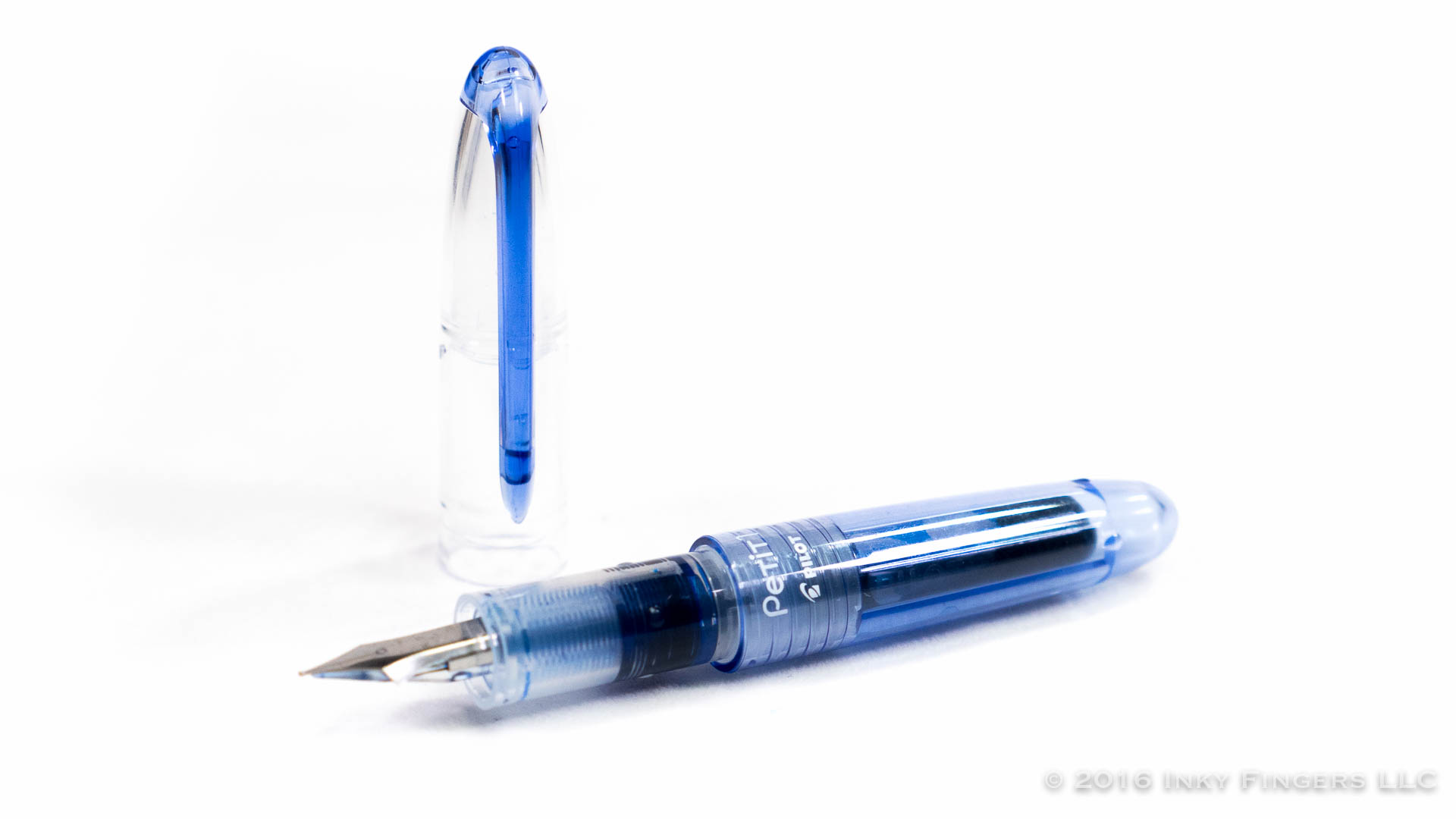 The cap pops off the pen to reveal a clear plastic section with a clear feed and a visually underwhelming nib. The cylindrical section unscrews from the barrel on big block threads. In theory, the Petit1 can be used as an eyedropper pen, but I had…let’s just say…“limited” success with that attempt. If you’re going to try to convert this pen to an eyedropper, my suggestion is that you slather the threads with silicone grease. Block threads are never ideal for eyedropper conversion, in my option, as they are rarely as tight or secure as regular threads. 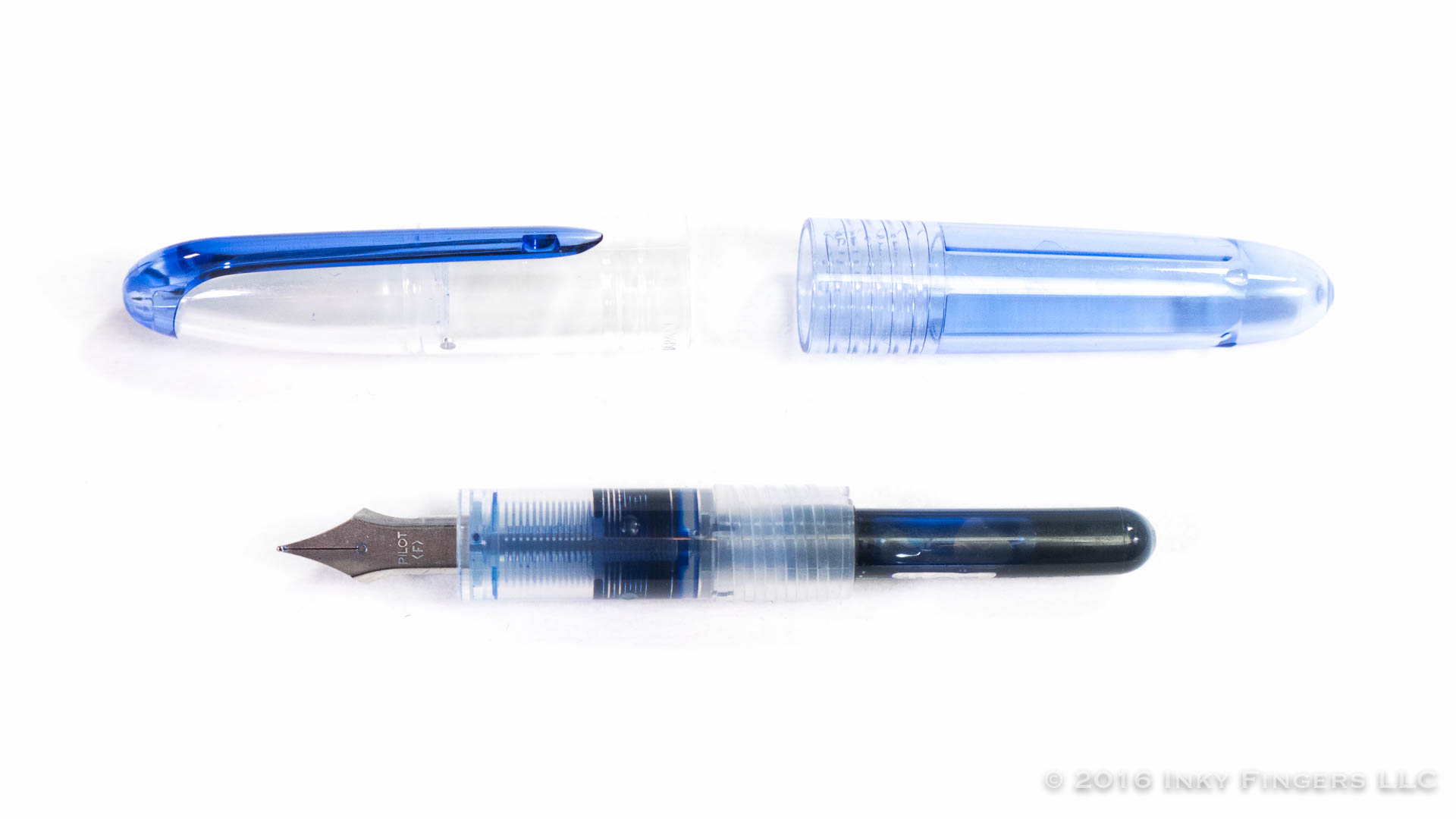 If you decide the risk of eyedroppering this pen isn’t worth the potential rewards, you’re stuck with cartridges. (There is no converter for this pen.) As mentioned above, the Petit1 uses its own proprietary cartridges which I found rather difficult to track down. This is not a popular pen in the fountain pen community, so finding retailers that carry the Petit1 carts, especially here in the U.S., can be difficult. The cartridges come in a limited range of colors, which (for better or for worse) match the colors of the pens themselves. (Apple Green, Apricot Orange, Baby Pink [gag], Black, Blue, Blue-Black, Clear Blue, and Red.) 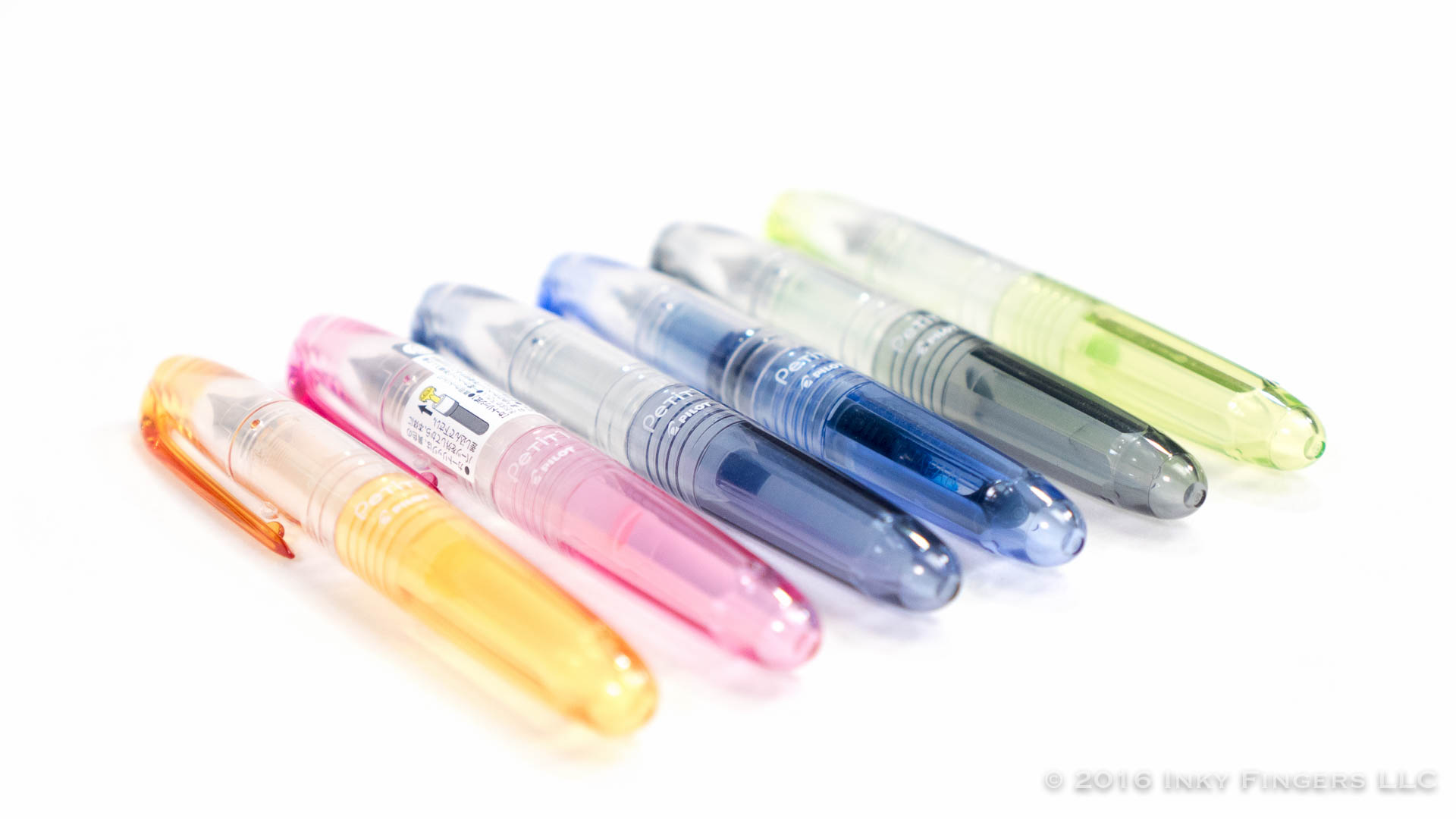 I think it’s pretty clear that I hate these pens, aesthetically at least. While they are technically fountain pens, they aren’t really fountain pens (if you know what I mean. Where’s the class? Where’s the over-inflated sense of self-worth that comes from knowing I’m better than everyone else because I’m using a fine writing instrument and not just a flimsy, disposable pen?  I was expecting to hate writing with them as much as I hated looking at them. What I was not expecting was how well they wrote.

Disposable or inexpensive pens usually have one thing on common: inconsistency. Like Forrest Gumps’ box of chocolates, you never know what you’re going to get. Tuning a fountain pen nib is an expensive process because there’s no great way to do it by machine. (Heck, based on some of the nibs I’ve received of late from some of the premium pen manufacturers, there’s not even a great way to do it with a human being.) But somehow, Pilot managed to make a really good, consistent nib in a $4 pen. 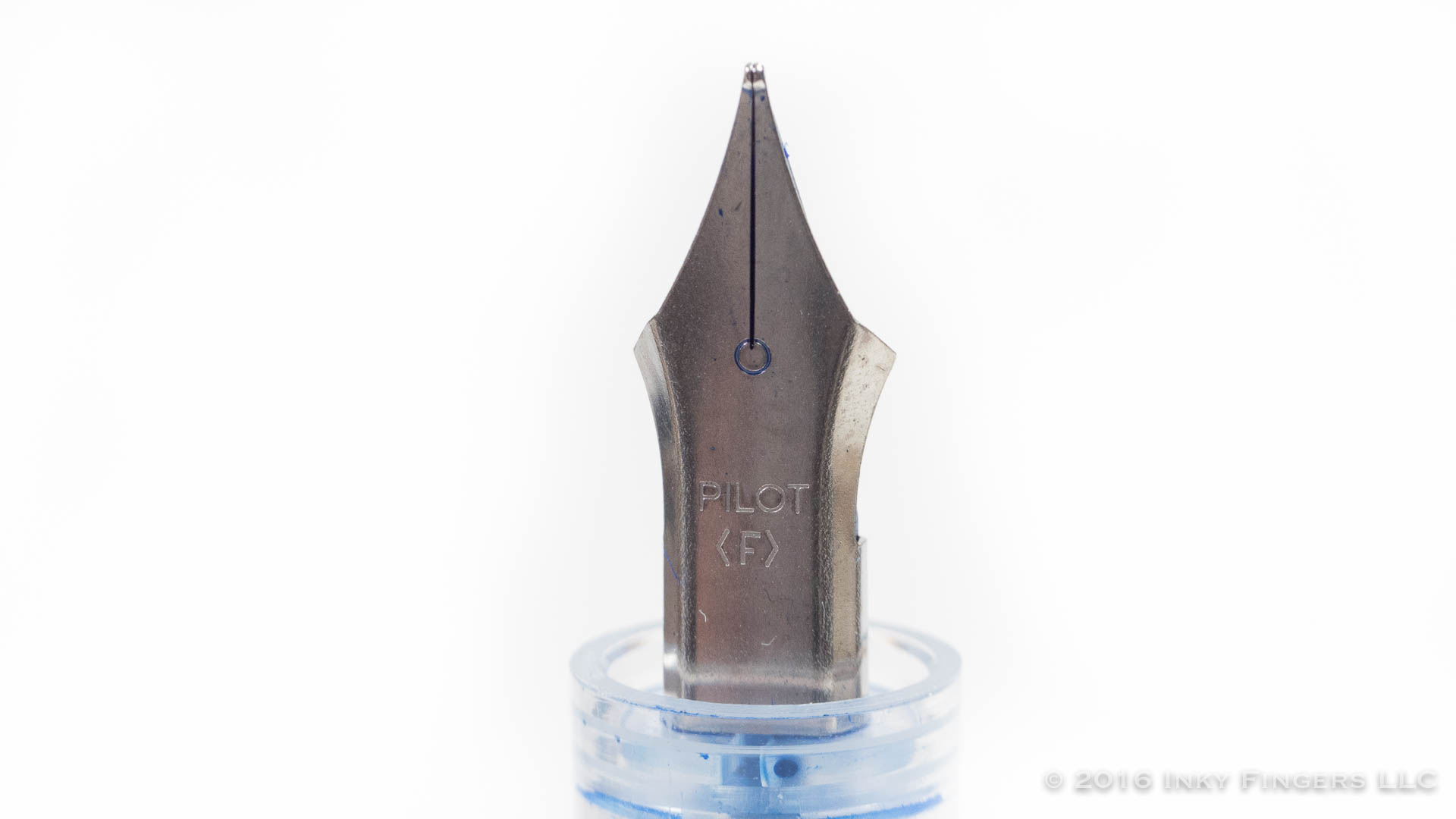 As far as I can determine, the Petit1 only comes with a Fine nib. This is not, however, a “Japanese” fine. It’s more in keeping with a fine nib on a European or American pen. It’s moderately wet, with consistent ink flow. The tines are perfectly in alignment, and the nib is smooth. It does maintain its middle-of-the-road feedback (a 5-6 on the MAFS), but it’s not an unpleasant feedback. There was nary a problem with the way this pen wrote. 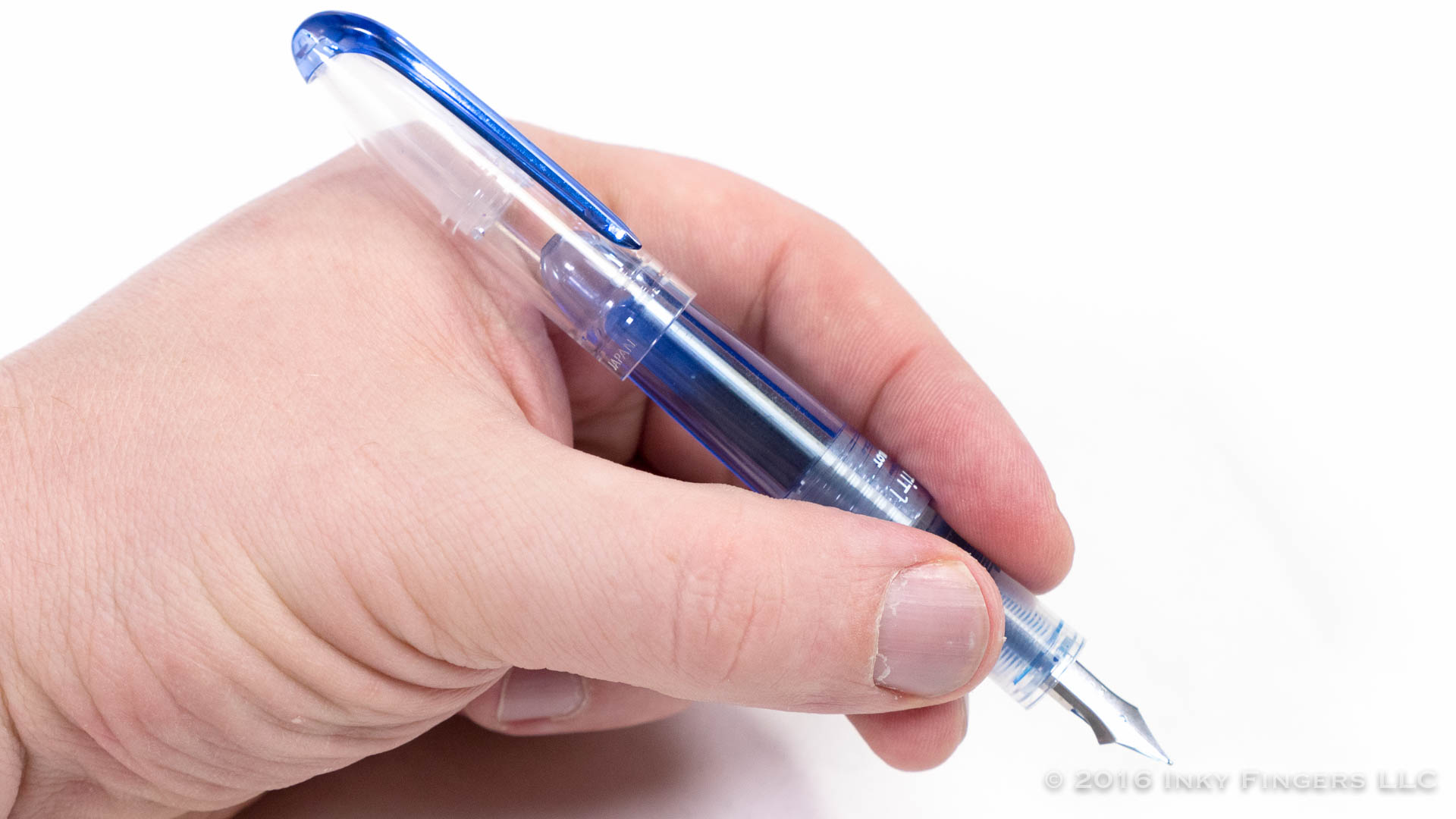 Even more than the nib itself, though, I was flabbergasted by the ergonomics of the pen. I usually have a deep dislike for pocket pens. Even when posted, they’re often too small or too narrow for me to use comfortably. Unposted, the Petit1 falls into the unusable category for me. It’s minuscule. Posted though, it becomes a really comfortable writer. The section is nearly 11mm in width: much wider than most other pocket pens I’ve used. The balance of the pen is nice, and the extremely light weight means that you can use the pen for long periods of time without getting cramped. 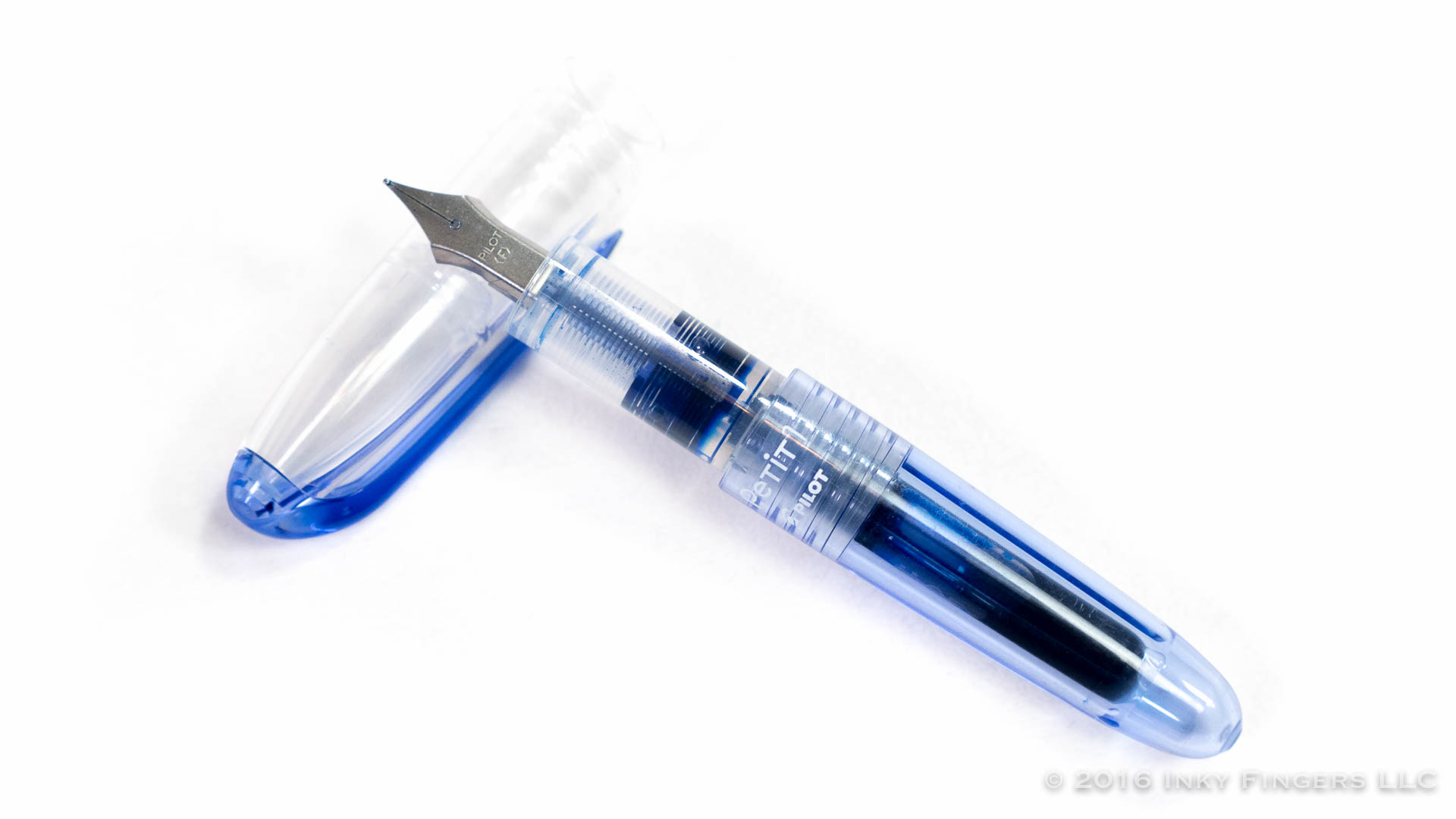 One other thing that surprised me about this pen was how well it did when being left alone. I did my initial review of this pen back in October of 2015. Unfortunately, I lost some of the footage so I had to re-record the review in April of 2016. I forgot I had left an ink cartridge in one of the pens (the pen I used for the video review, in fact) back in October. When I uncapped the pen seven months later, I expected I would have to clean out the dried-up ink in the feed, or perhaps squeeze the cartridge a few times to get the ink flowing again. Instead, I uncapped the pen, placed it to paper, and wrote as though I had inked it only a few hours earlier. I never had a single problem with its writing. I just didn’t dry out. For a pocket pen that could get lost in a purse or a backpack, that’s a pretty handy feature in my opinion.

Overall, the Petit1 is not for me. When I sit down to reach for a pen, I am not looking for some Candy Crush-colored confection of a writing instrument. I want something else out of my fountain pens. That being said, I can’t write off (Get it? Huh? Write?  Oh, nevermind.) the Pilot Petit1 as thoroughly as I had hoped I might be able to. Any pen that writes this well, even after seven months of neglect, and does it at a sub-$4 price point has my impressed, if grudgingly, respect.