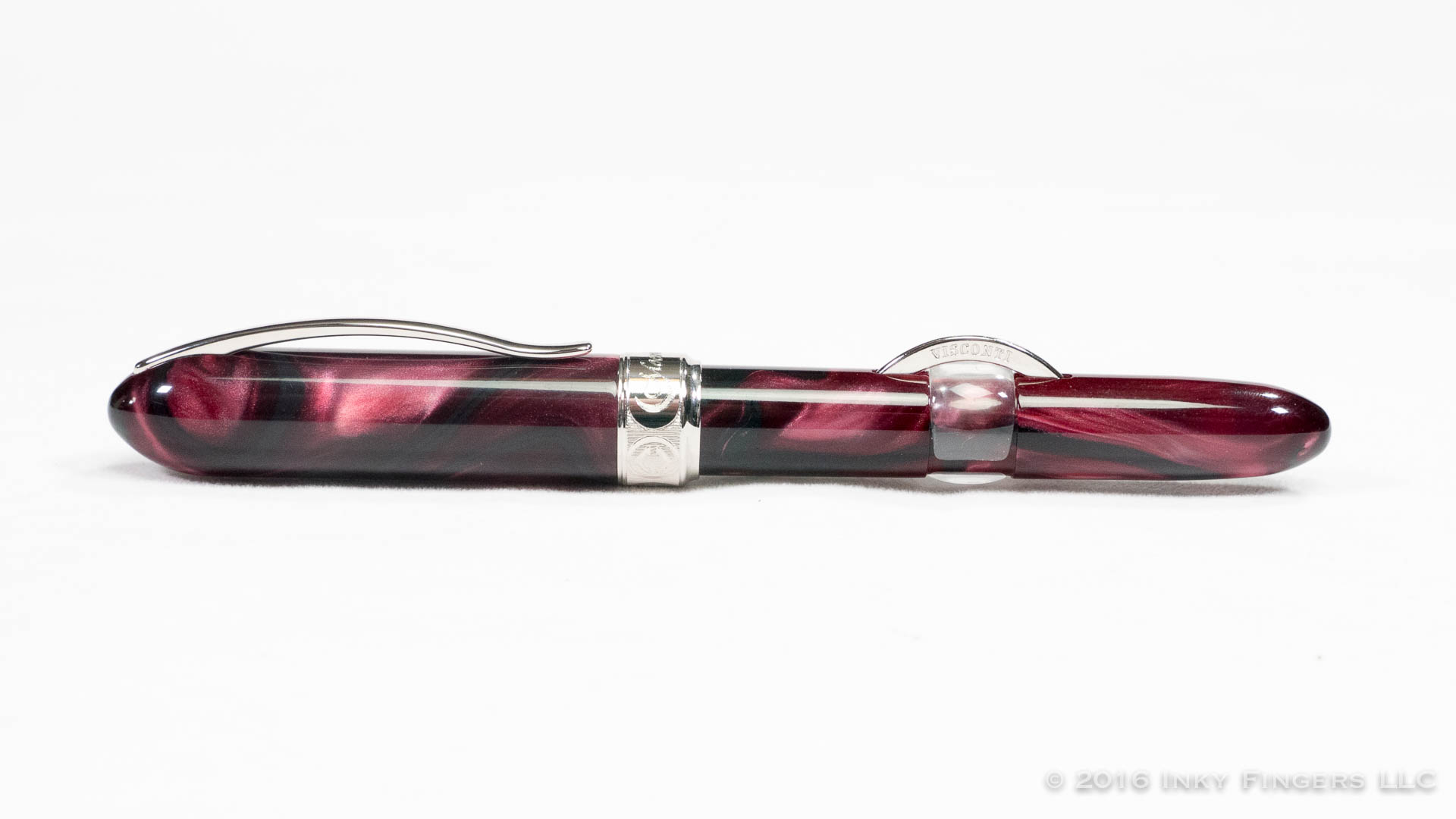 I’ve said it before and I’ll say it again: I’m a sucker for unusual filling systems. For me, the acts of filling and cleaning a fountain pen are relaxing and meditative (Zen and the Art of Fountain Pen Maintenance). Unique filling systems help to make that process even more involved and, if you’re a nut (like me) who likes cleaning your pens out, enjoyable.

My appreciation of unusual filling mechanisms was triggered once again with one of Visconti’s newest offerings, their limited edition Millennium Arc Moonlight fountain pen. Released in 2015, the Millennium Arc series consists of two collections: a bright and colorful “rainbow” pen, and the Moonlight collection (which comes in Burgundy, Blue, and Green). Each edition of the pen comes in a limited production run of 200 numbered pieces. 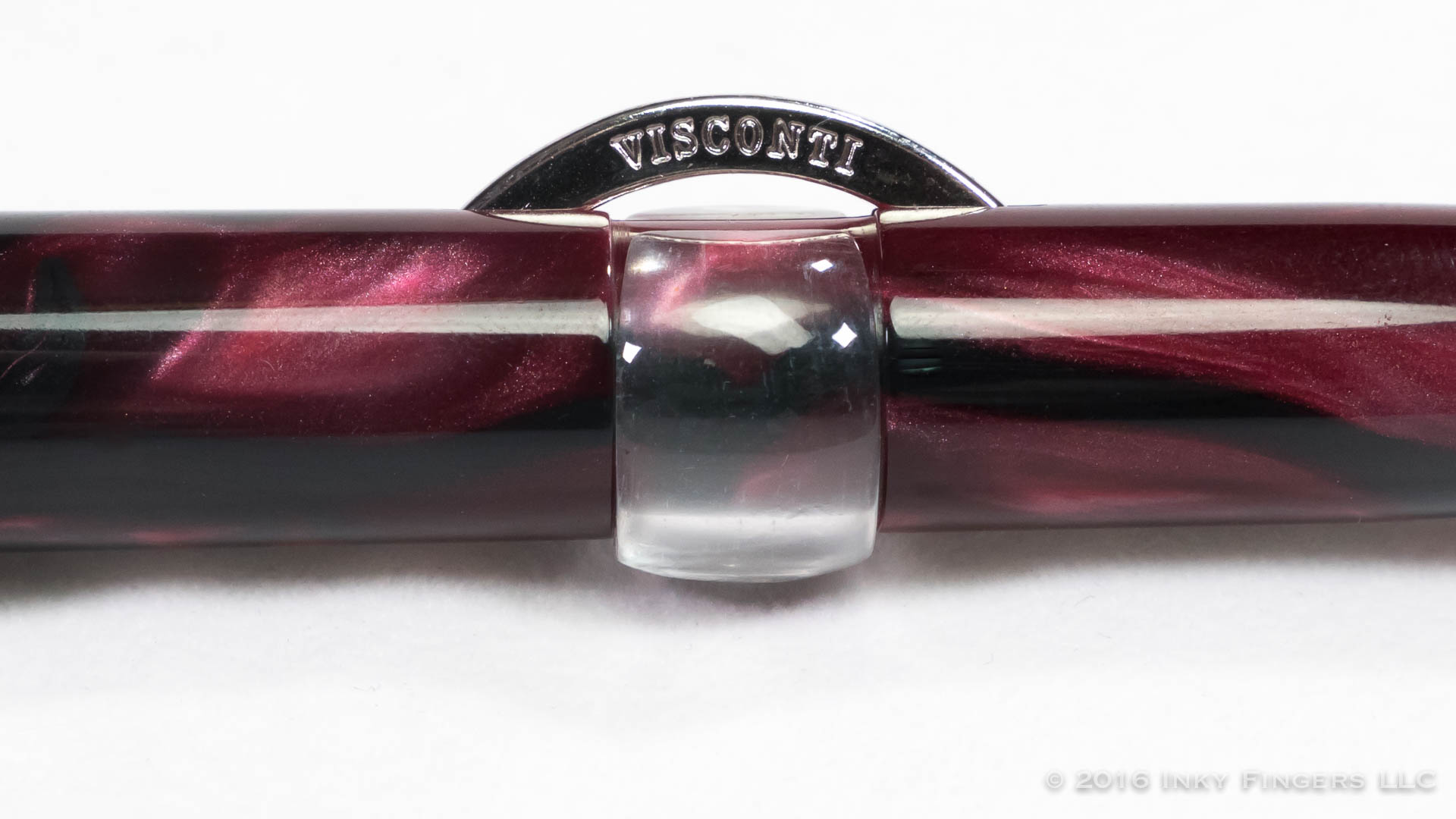 What makes these Millennium Arc pens unique(ish), however, is the filling system. It is what is commonly known as a “Crescent Filler,” but that name is a Conklin trademark, so Visconti has named their version of the system the “Arc Filler.” You fill the pen by depressing the metal “arc” protruding from the top of the pen’s barrel. Pressing down on the arc compresses a metal bar inside the pen which in turn compresses the sac. When released, the sac re-expands, sucking ink up into the pen. The system is quick and efficient, and cleans fairly easily as well. It can also hold a better-than-average amount of ink. To keep the arc from being accidentally depressed, the pen also includes a clear plastic collar which can be rotated around the pen’s barrel to “lock” the arc in place. It is a nifty system that isn’t quite as easy or convenient as cartridges of converters, but is still nice enough for regular use.

In the past, this type of filling system utilized latex sacs inside the pen. Latex sacs can be a bit problematic, springing leaks, or turning brittle with disuse and age. Some inks have even been known to “melt” those sacs. Visconti has wisely opted to use silicone sacs instead of latex, and state that the sac has a 100-year guarantee against ink corrosion. (Although who knows if parts would even be available in 100 years.) 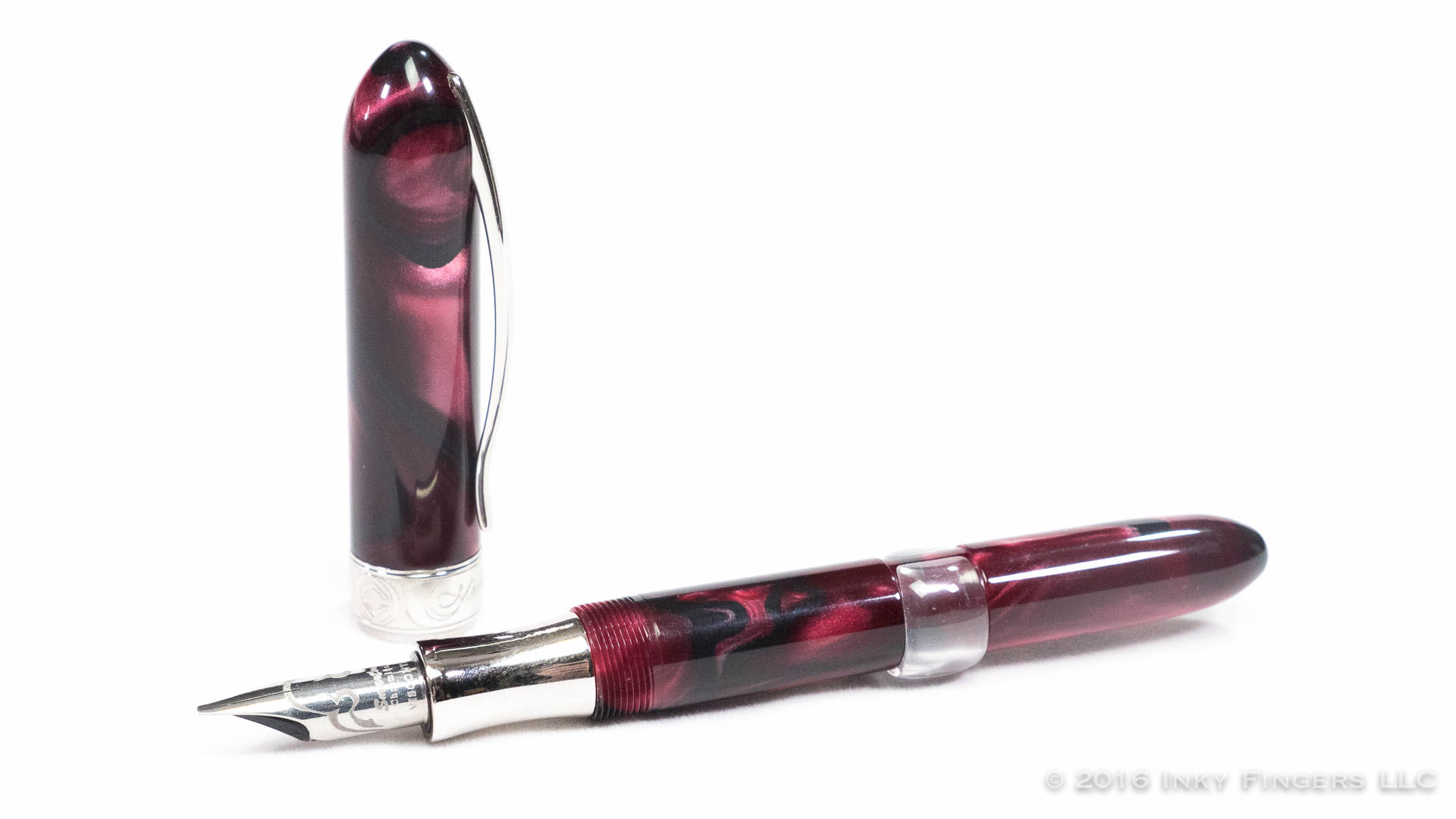 Design-wise, the Millennium Arc is something of a departure from many of Visconti’s more recent design. Still there is Visconti’s traditional use of gorgeous materials: in this case a deep, rich burgundy swirl acrylic with spectacular chatoyance. The pen’s cap is manufactured from a single piece of that acrylic. The traditional Visconti “bridge” clip is gone, replaced by a slender, sweeping clip that still maintains the “Arc” motif, but with a gentler, more graceful curve. The clip is inset into the cap and is spring-loaded. I like the clip, but like most of Visconti’s clips, I wonder about the pen’s ability to keep it self in place when clipped to a shirt pocket. 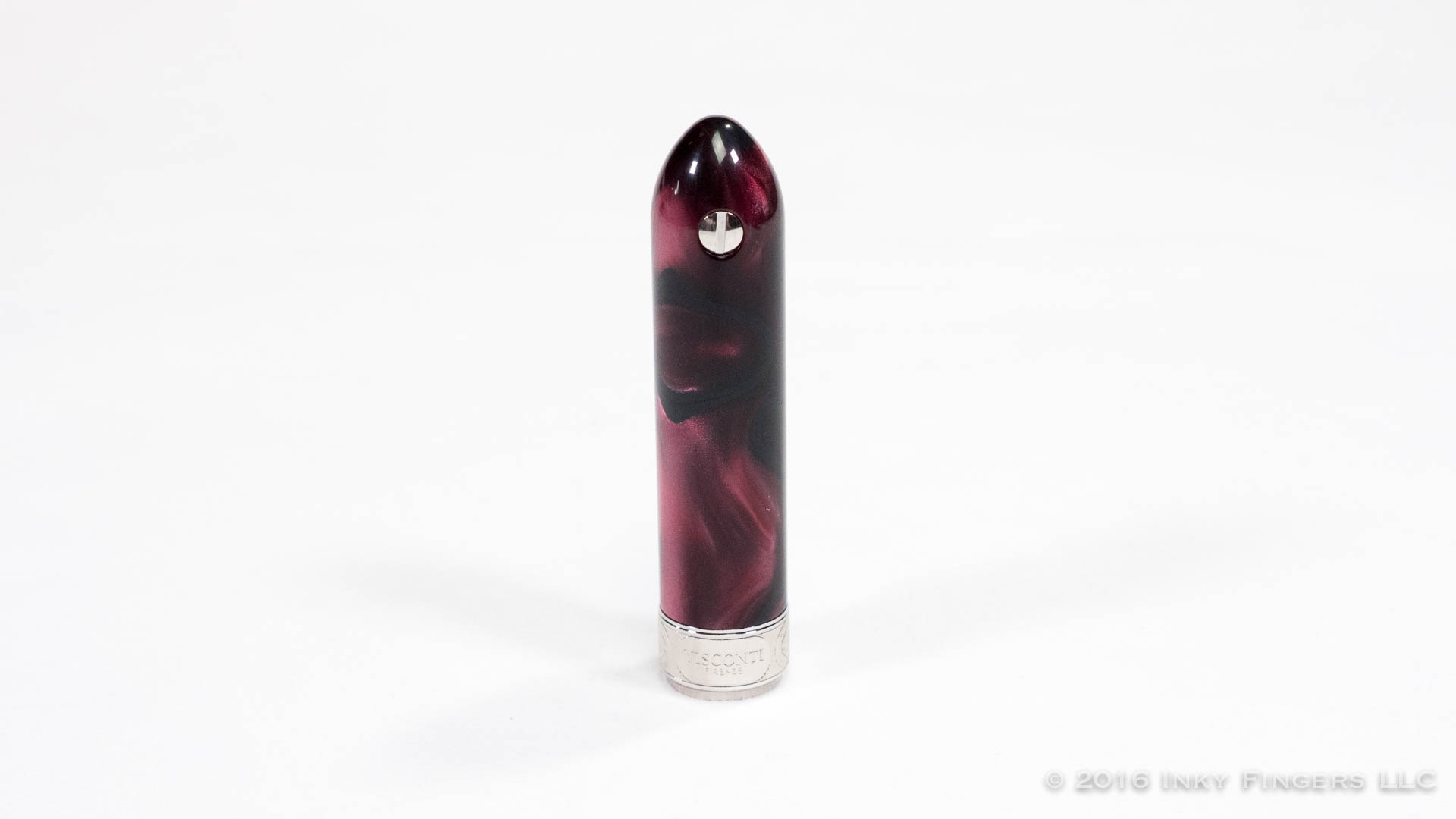 The cap itself has a slightly bulbous shape and a rounded top. The back of the cap has a visible silver screw, which I believe is used to hold the clip mechanism in place. The pen’s thick cap band is silver-colored and features an intricately-engraved design. On one side, the “Moonlight” collection name is features in a cartouche. On the other side is a second cartouche with the words “Visconti Firenze.” 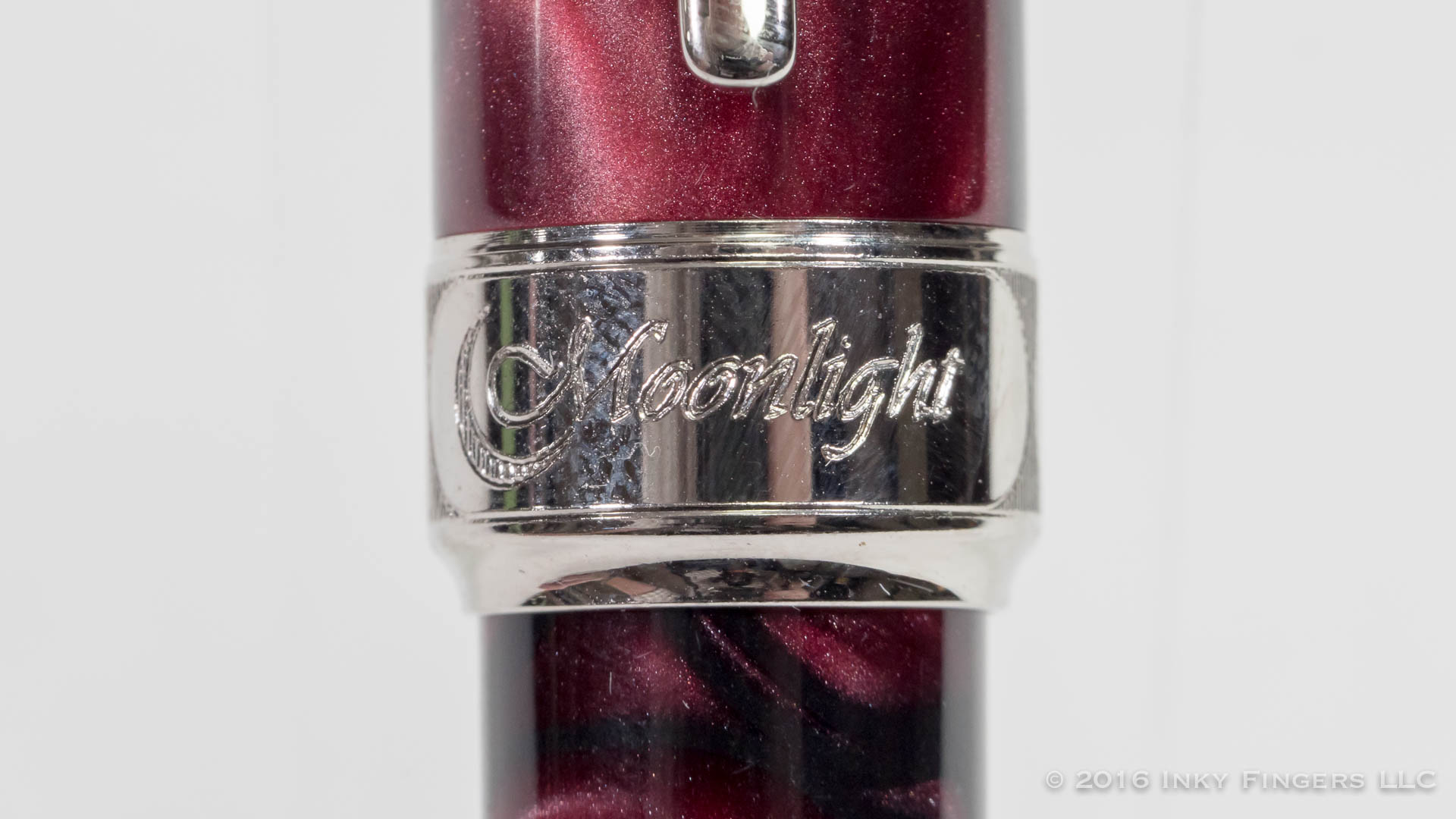 The barrel of the pen is relatively nondescript. Or, it would be, were it not for the goiter-like appearance of the arc-filler and lock collar about 1/2 way down the barrel. The arc-filler returns to the more traditional Visconti bridge design, including the engraving of the company name on the side. The lock collar is made of clear plastic which, unfortunately, looks a bit cheap compared to the lustre of the rest of the pen’s materials. 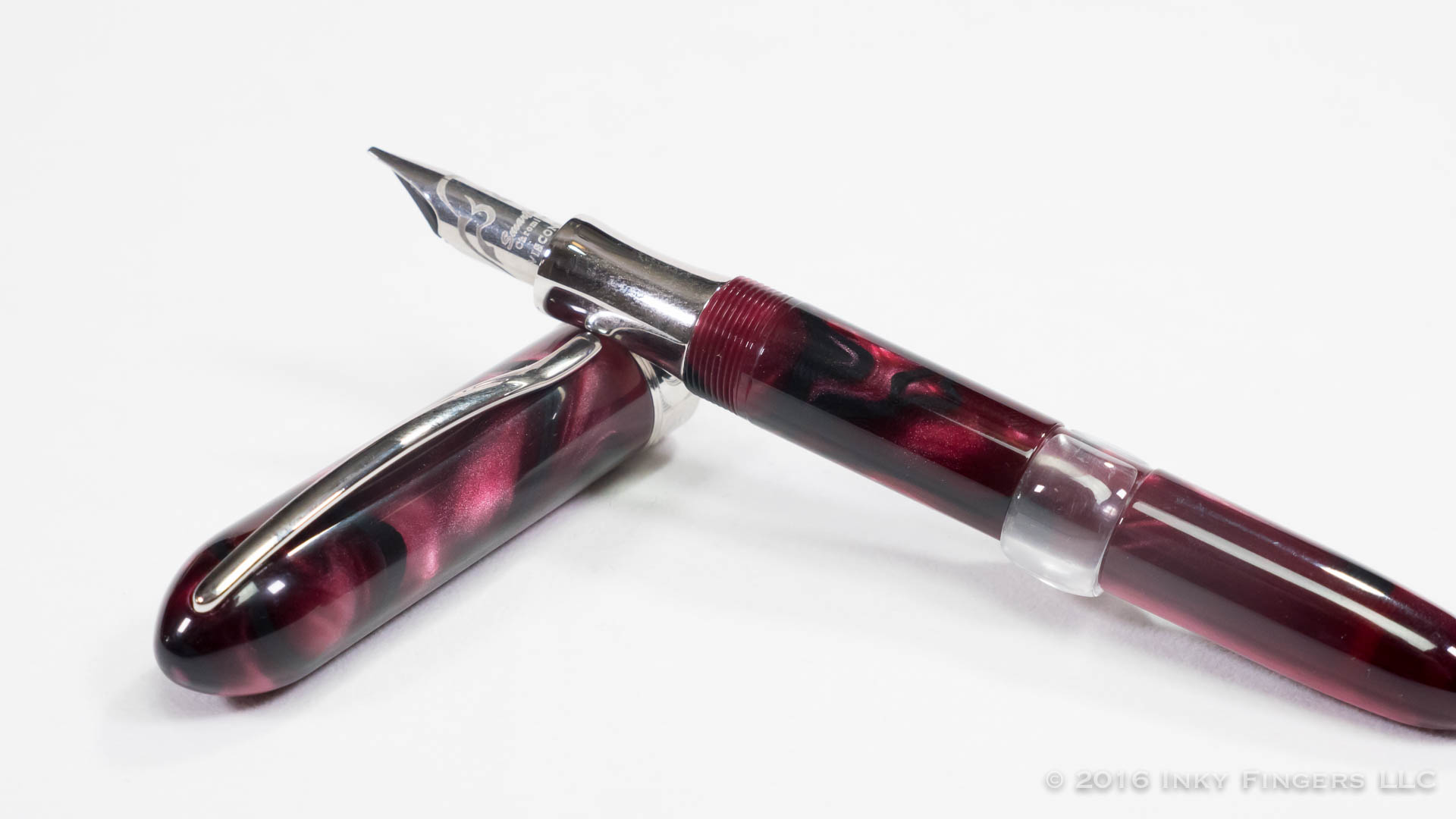 The cap unscrews from the barrel with 1 1/2 turns to reveal a concave silver metal section, with the pen’s number engraved on the side. I am normally not a fan of polished metal sections, but this one more comfortable than expected; the section’s shape prevents it from becoming too slippery in the hand. 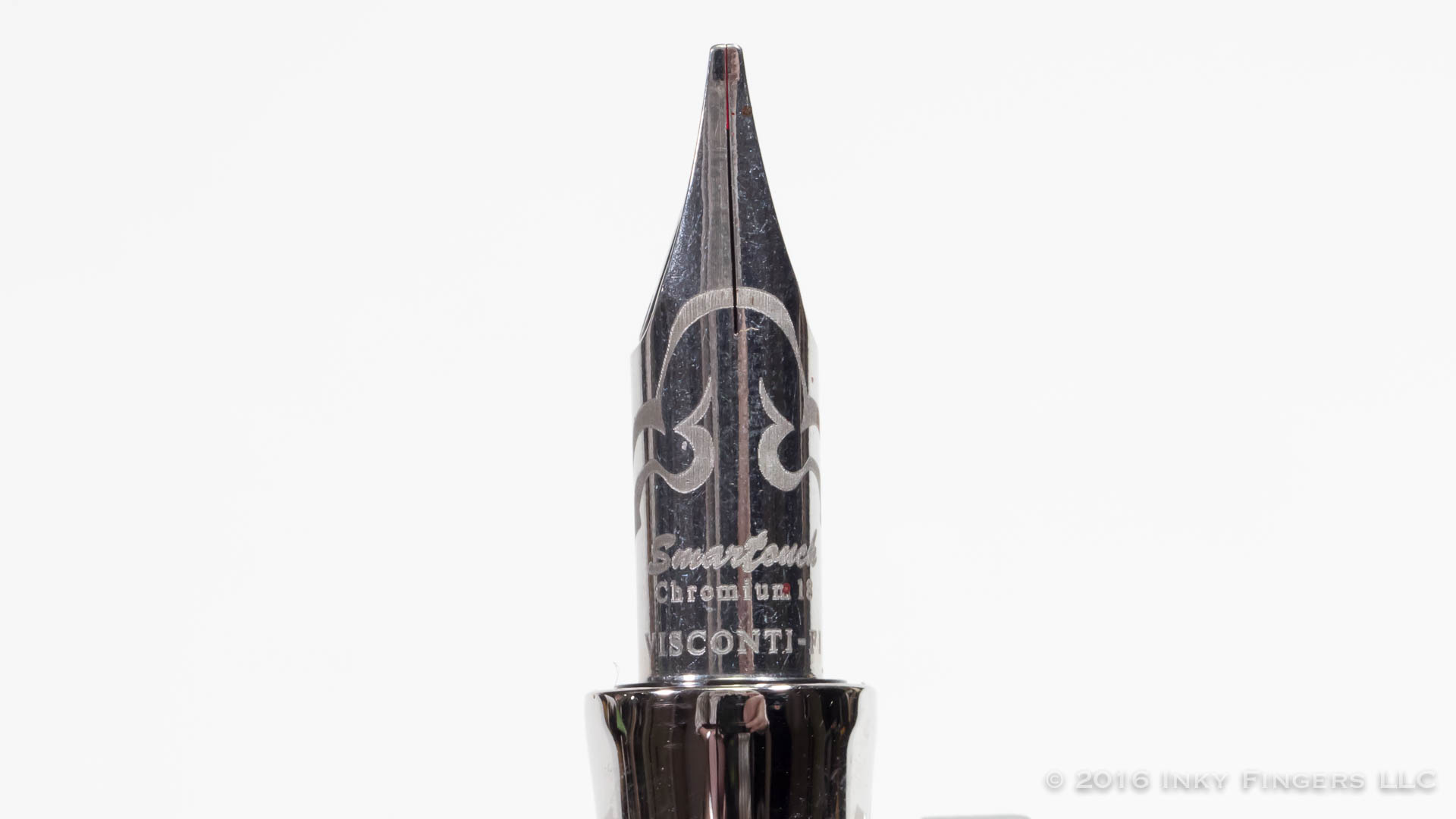 Then, at last, we come to the nib. The Millennium Arc series utilizes Visconti’s “Smartouch” Chromium 18 nib. I’m not a metallurgist, but my understanding is that Chromium is a major ingredient in steel; this particular nib is, for all intents, a steel nib with a slightly different alloy. Visconti has eschewed the traditional nib shape for a tubular nib that wraps around the feed. 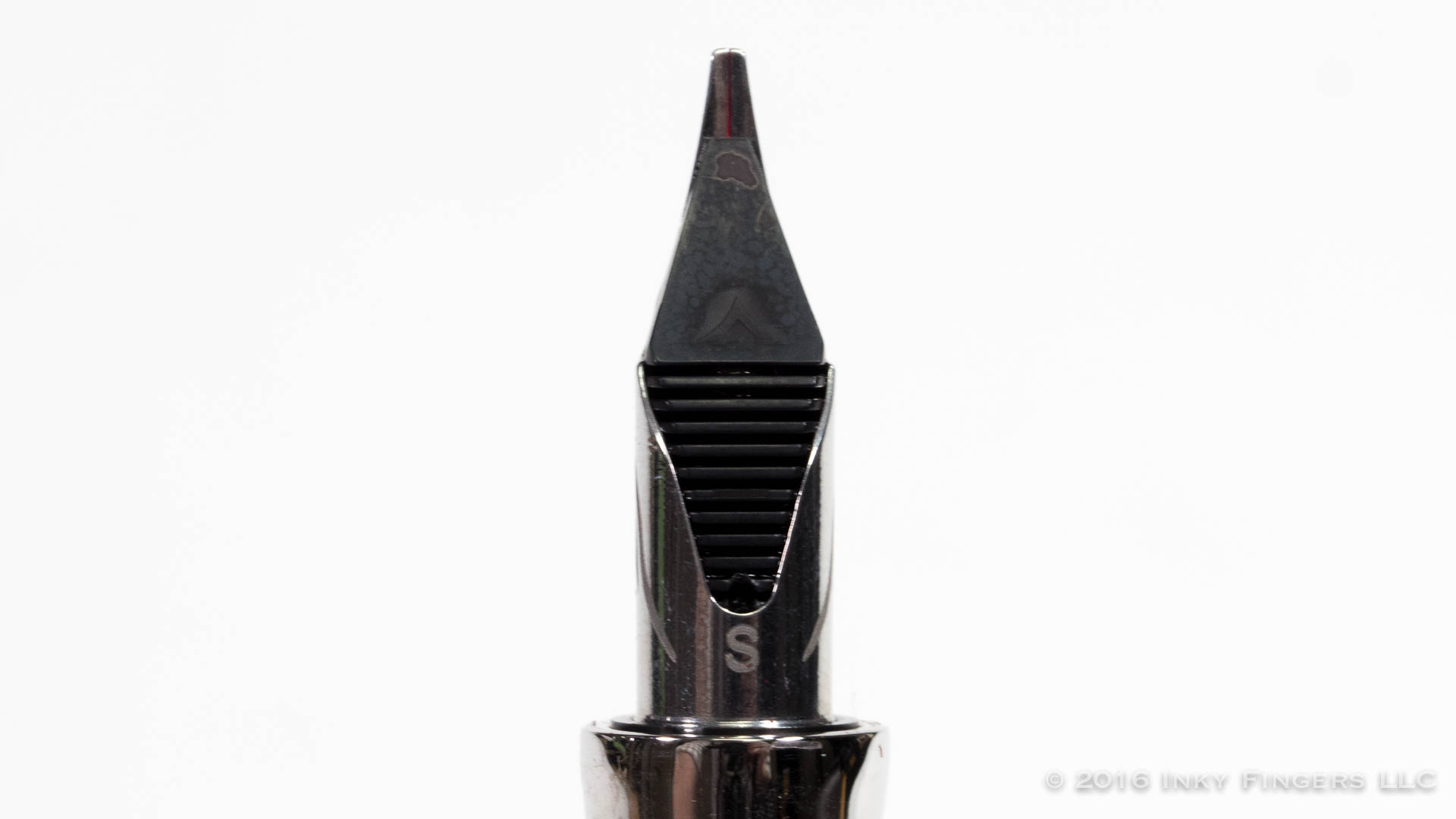 While I don’t particularly care for the argle bargle of the “Smartouch Chromium 18” marketing copy, I rather enjoy this nib. The unusual design of the pen’s nib and feed resulted in a consistently wet, smooth writing experience. Even with the fat line of the 1.3mm stub nib, the pen never choked or slowed down a bit. It went through ink pretty quickly, but managed to keep up like a champ. The stub nib itself was surprisingly smooth and buttery for an un-tipped stub nib. (One disappointment with the nib is that Visconti opted not to tip the nib for a pen at this price point. I much prefer a tipped stub nib over an un-tipped nib.) Visconti says that the wraparound nib design helps improve ink flow and keep the nib wet. While I doubt there is any quantitative evidence regarding correlation vs. causation, I can’t argue the point either: This is one of the best stubs I’ve had the pleasure of using.

One other thing that I noticed about this particular stub was that it seemed to exhibit just a hint more bounce than most steel nibs I have used…especially those from Visconti. Don’t get me wrong: it’s still a rigid nib. But the long, slender tines seem to allow a slightly “cushioned” feel when writing with the pen.

In the hand, the pen is nice. The metal section helps to draw the weight of the pen down a bit, balancing it nicely. The slightly narrow grip tended to push me toward gripping too tightly, but the lighter weight makes for comfortable longer writing session. Even posted, the pen feels good in the hand. 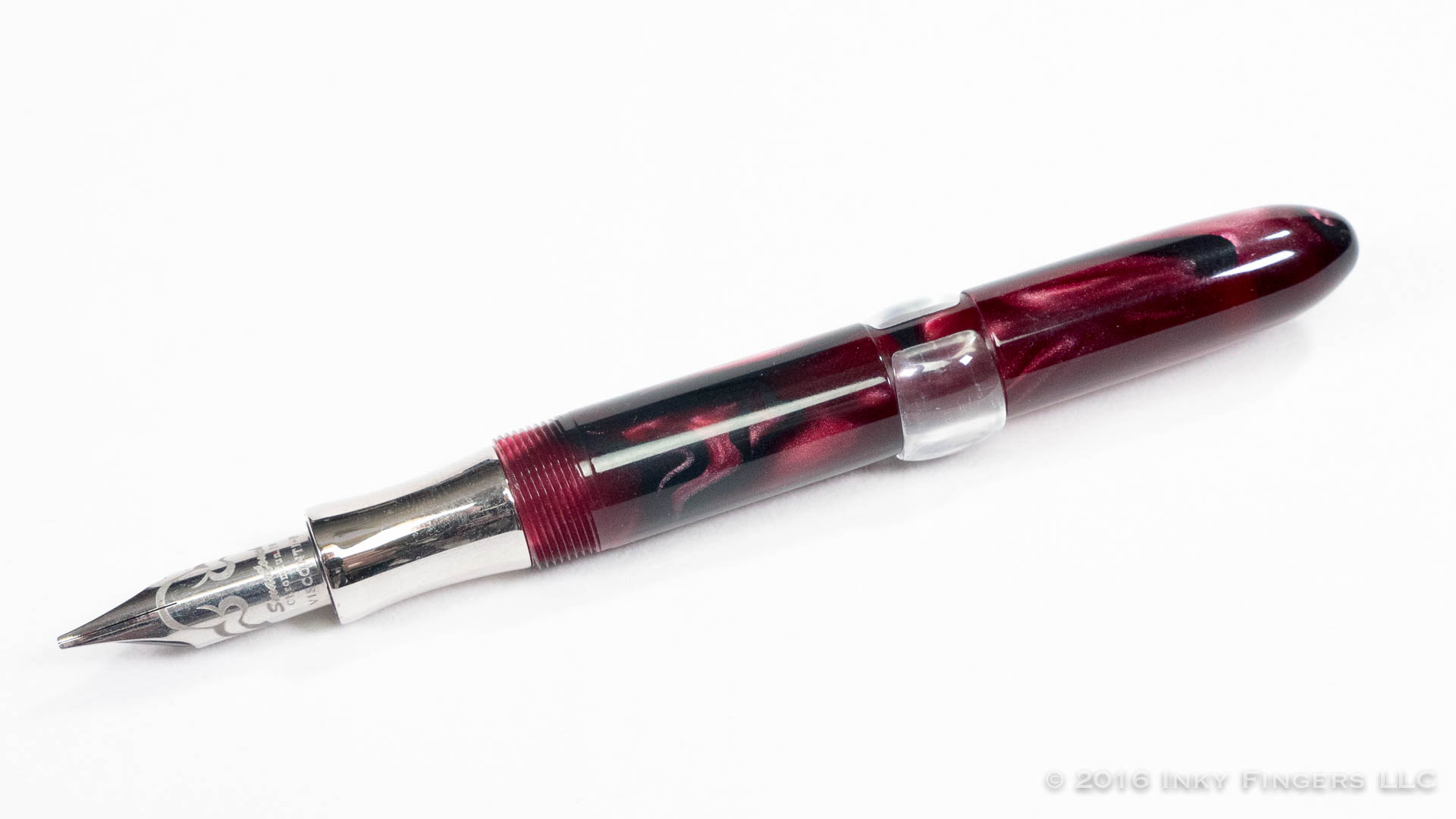 I should mention that this particular pen came to me with a very minor quality control issue. When I first got the pen, I didn’t realize that the screw-in nib unit was loose, and the nib was 180° from being properly seated in the section. As a result, the arc filler rested directly in the web of my hand. (You can actually see this in the photo above. The arc filler is supposed to be directly in line with the top of the nib.) Also, as a result of being loose, the pen had a bit of an air leak and kept burping up ink onto my page. I started to get really frustrated until I realized the problem and tightened down the nib unit. The pen behaved perfectly after that. It’s a minor thing, but something that should have been caught in the factory. 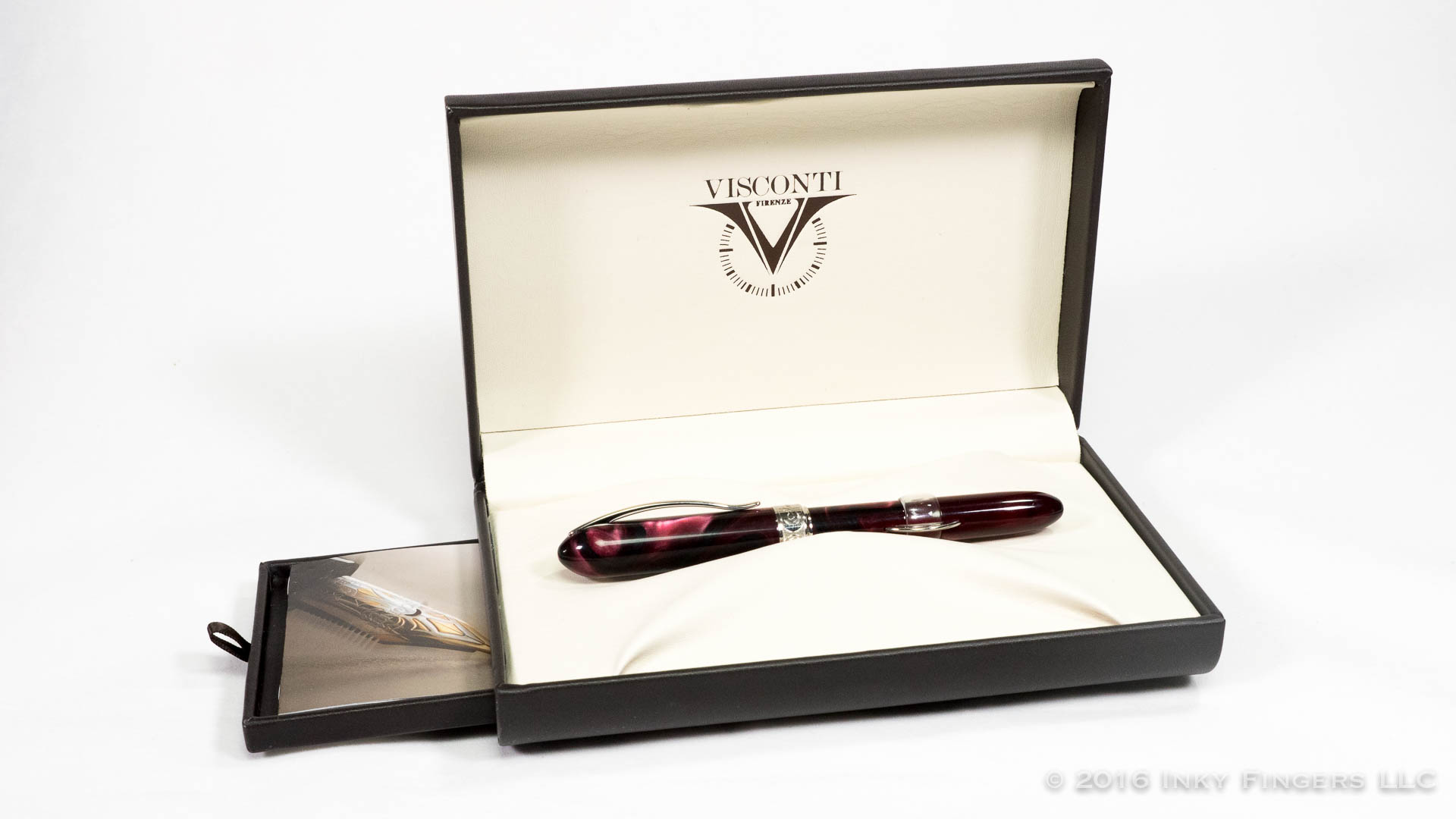 The Visconti Millennium Arc is listed online at $350. As is becoming increasingly common (and frustrating going on infuriating) the actual sale price of the pen can’t be displayed by the authorized retailers. That being said, the pen will retail for around $280.

(Side rant: HEY PEN MANUFACTURERS, KNOCK IT OFF! Hiding the price from your customers doesn’t increase the mystique or endear your brand to your customers. It just pisses us off and inconveniences your retailers. The practice of hiding prices is just a holdover from brick and mortar luxury retail that simply does not fly in today’s online retail climate. Online, people want to know the price. Stop trying to be sneaky or underhanded. Nobody needs that kind of B.S. “Ain’t nobody got time for that!”)

This is yet another pen in that “almost $300 for a pen with a steel nib” price range that pens like the Montegrappa Copper Mule or the Visconti Van Gogh fall into. While I do wish this pen came with one of Visconti’s Dreamtouch 23k Palladium nibs, the Smartouch nib is different enough that I don’t mind that the pen comes with (essentially) a steel nib. I like the filling system a lot; aside from vintage pens or a few of the offerings from the modern Conklin, there aren’t a lot or arc/crescent fillers around. The material is beautiful, the design is straightforward, and the pen writes like an absolute dream.

The pen for this review was loaned to The Pen Habit from Goldspot Pens. No additional compensation was provided and the pen will be returned after the publication of the review.