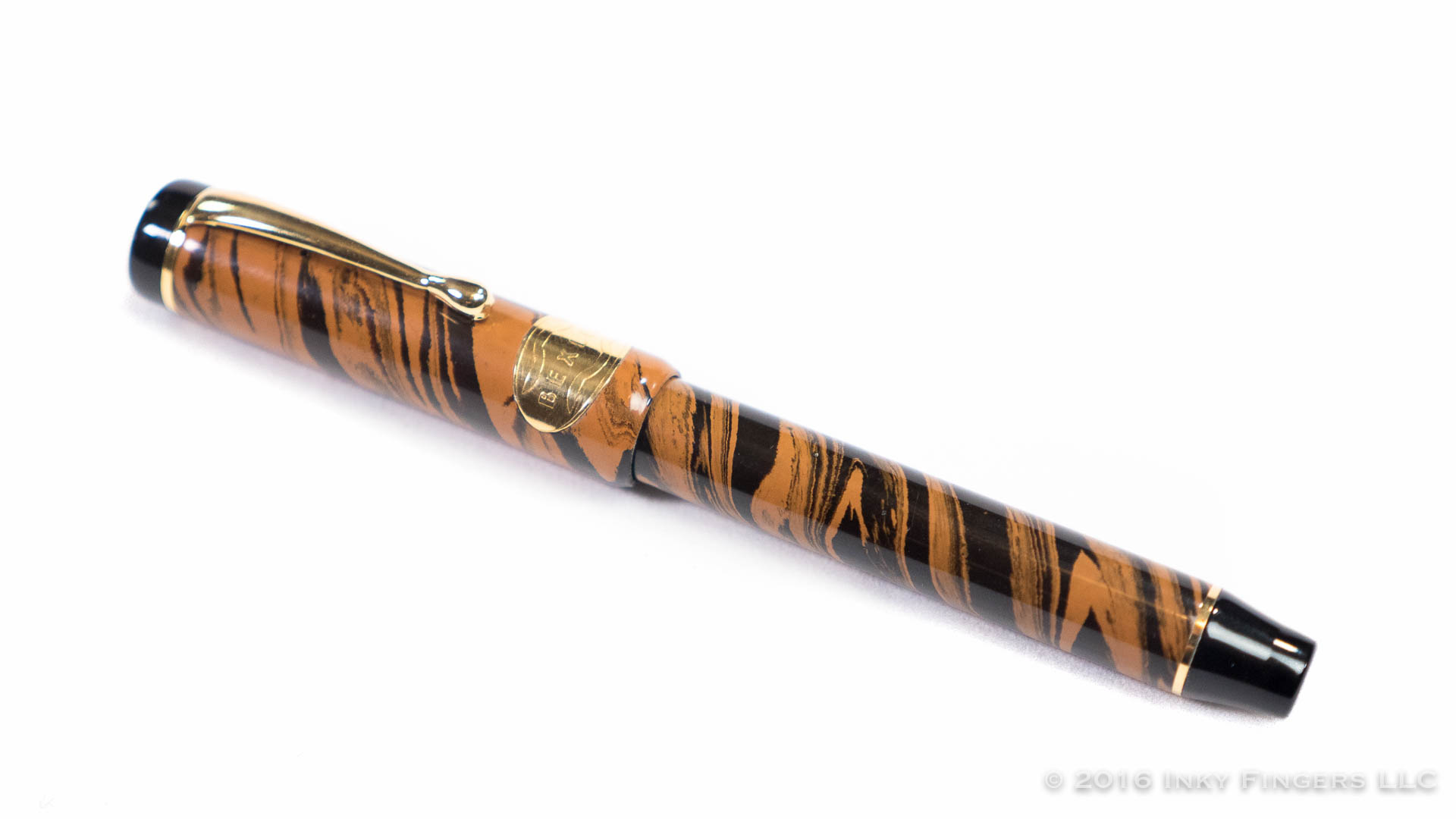 When it comes to sweets, nothing can compare to the complex, rich, buttery taste of a perfectly-browned caramel. The browning of the Maillard reactions, which turn sugars into that toasty, slightly burnt, oh-so-intricate combination of sweet and savory, is the thing of culinary magic.

My love of caramel is apropos of absolutely nothing (except perhaps an invitation to send me caramel anything.) That being said, when I laid eyes on the tiger stripe awesomeness of the Bexley Ebonite Amber Agate fountain pen for the first time, I was laying eyes on a particularly luscious caramel macchiato made solid and fitted with a 14k gold nib. 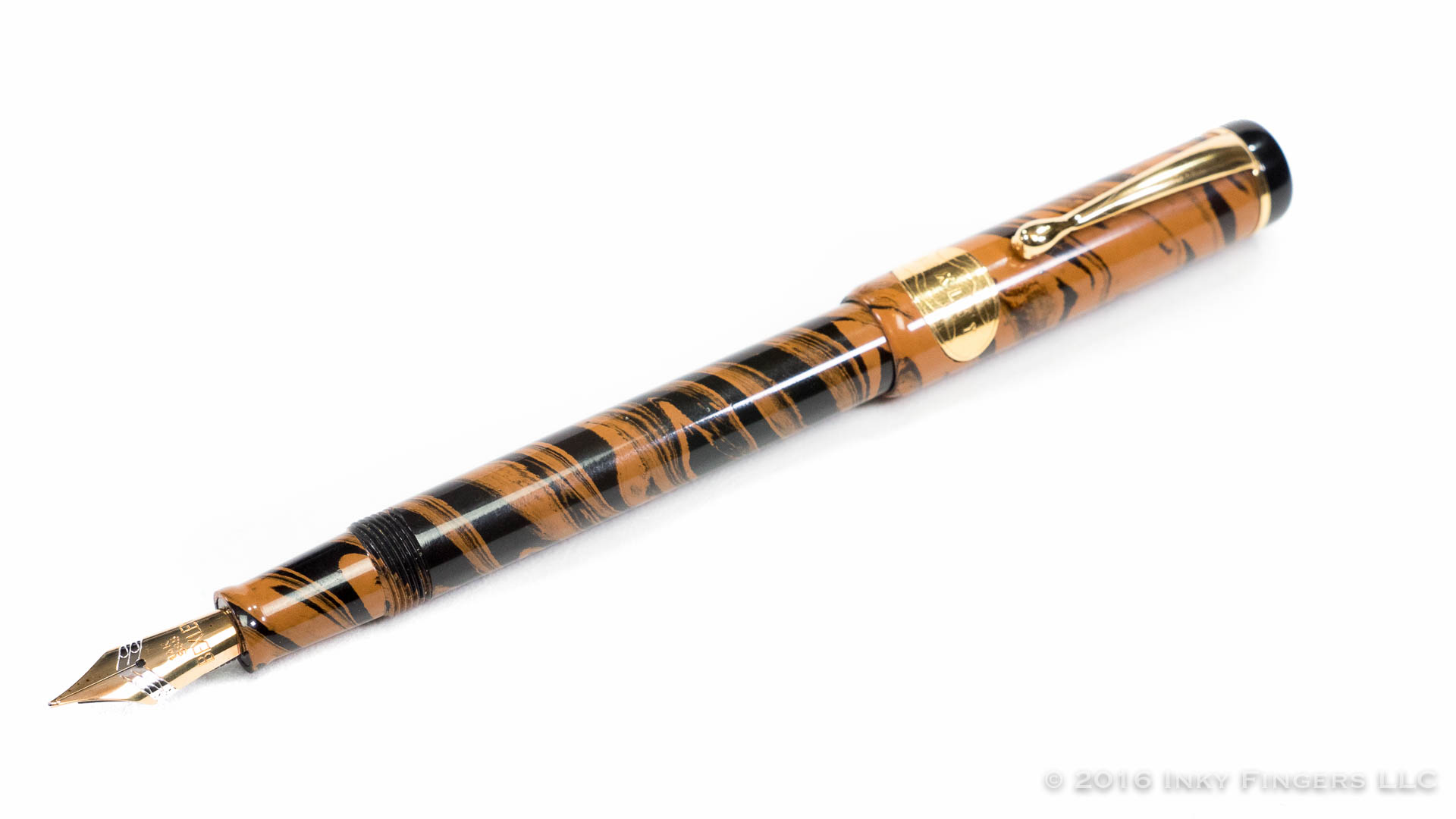 The Bexley Ebonite model was made in 1998 to celebrate the fifth anniversary of the company’s founding. As the name might imply, the pen comes in one of three ebonite flavors: a green/olive mottled swirl, a ruddy smoked amber swirl, and the caramel-colored Amber Agate. 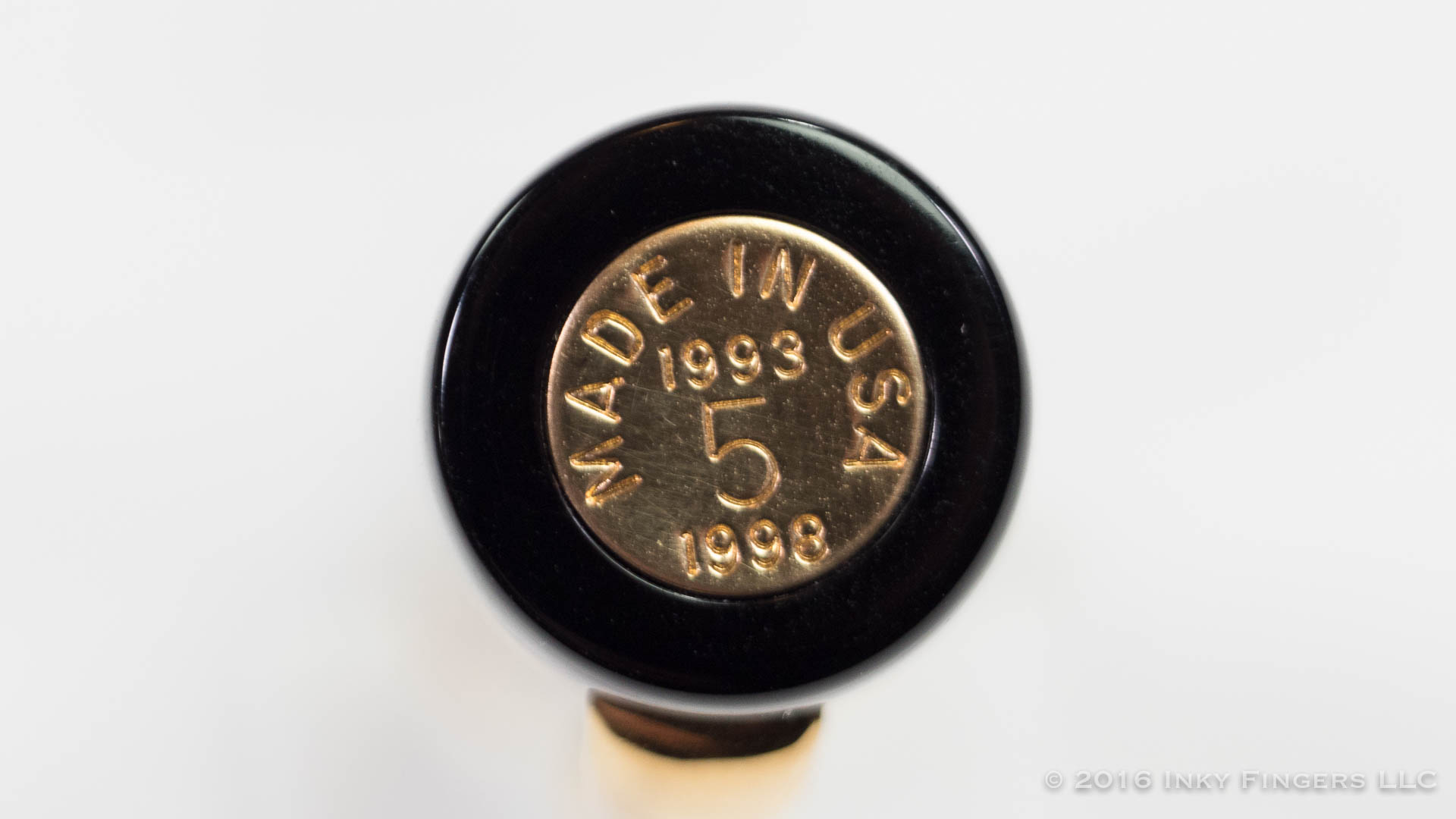 The pen’s design is closely based on the vintage Parker Duofold Seniors of years gone by, in all of their flat-topped glory. The top of the cap is inlaid with a gold medallion celebrating the fifth anniversary. The finial is separated from the cap by a gold ring, into which a slot is cut for the clip. The clip itself is strong and springy, but relatively generic from a design standpoint, neither adding to nor distracting from the design. The only real design misstep on the pen is a large oval Bexley medallion attached to the wall of the cap. It is a garish, completely unnecessary bit of branding which cheapens the overall look of the pen somewhat. 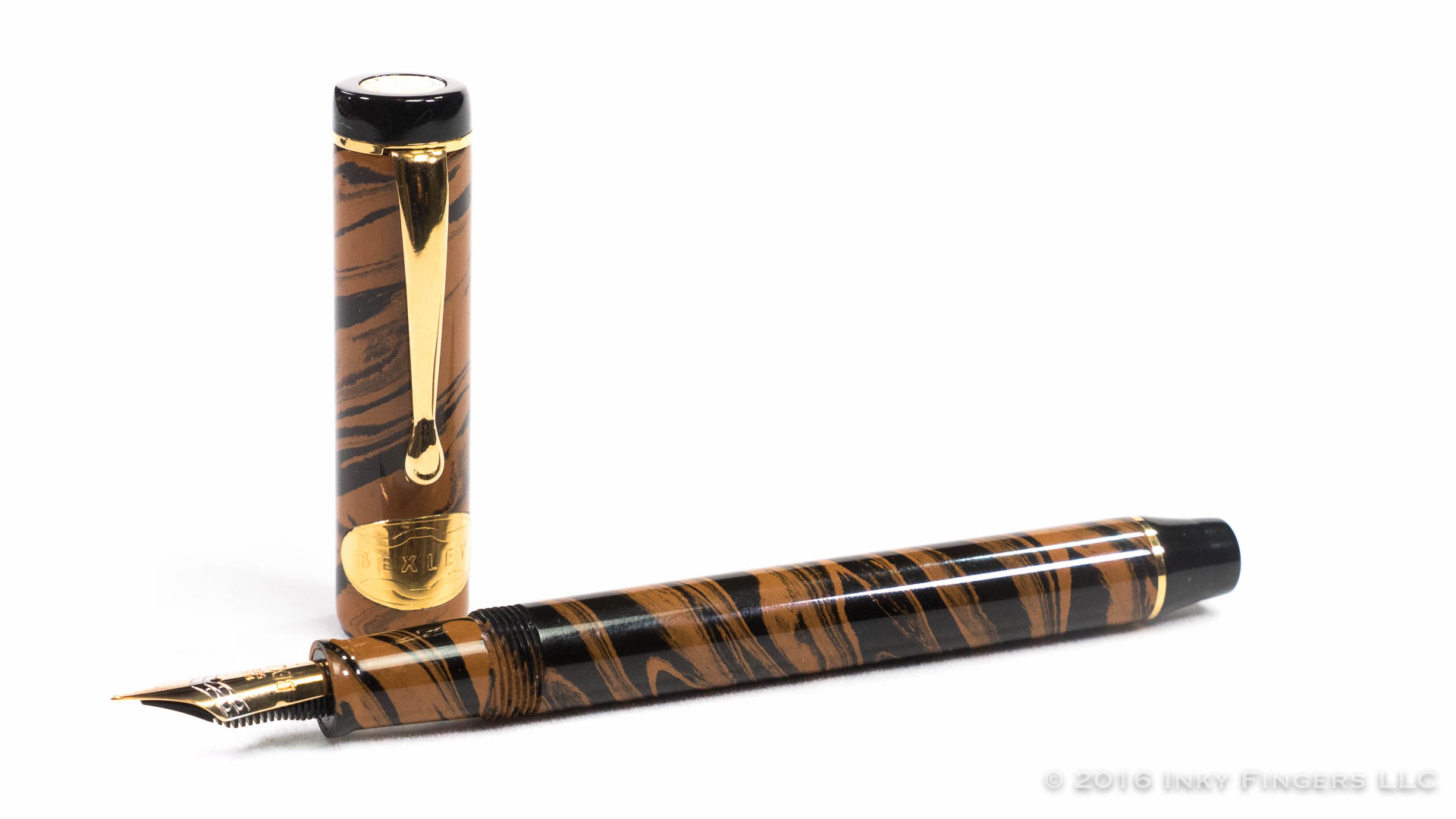 The barrel swells slightly from the cap toward the end of the pen. There is a second gold ring and another black finial that pinches in before flattening out as well. 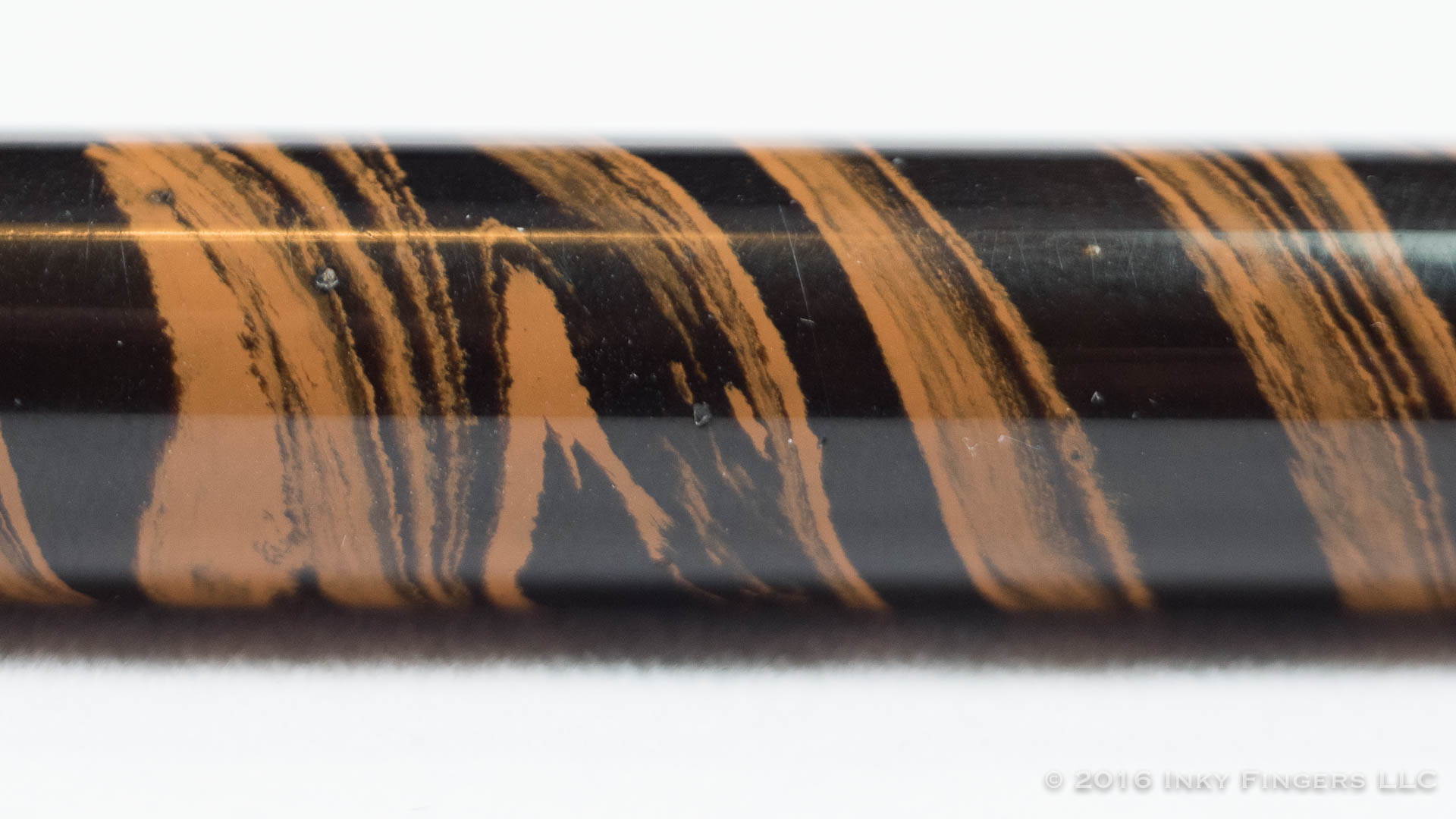 When you borrow design elements from the classics, you almost can’t help but come up with a balanced, attractive writing instrument. While that is true here, I find that the real star of the pen is not the design, but the ebonite from which it is made; it is some of the boldest, most beautifully-figured ebonite material I have ever seen. It is expertly turned and finished, with a smooth, glossy surface devoid of visible tool marks. There are, sadly, a few inclusions in the material which mar the surface a bit, but they’re only noticeable if you’re going over the pen with a magnifying glass. 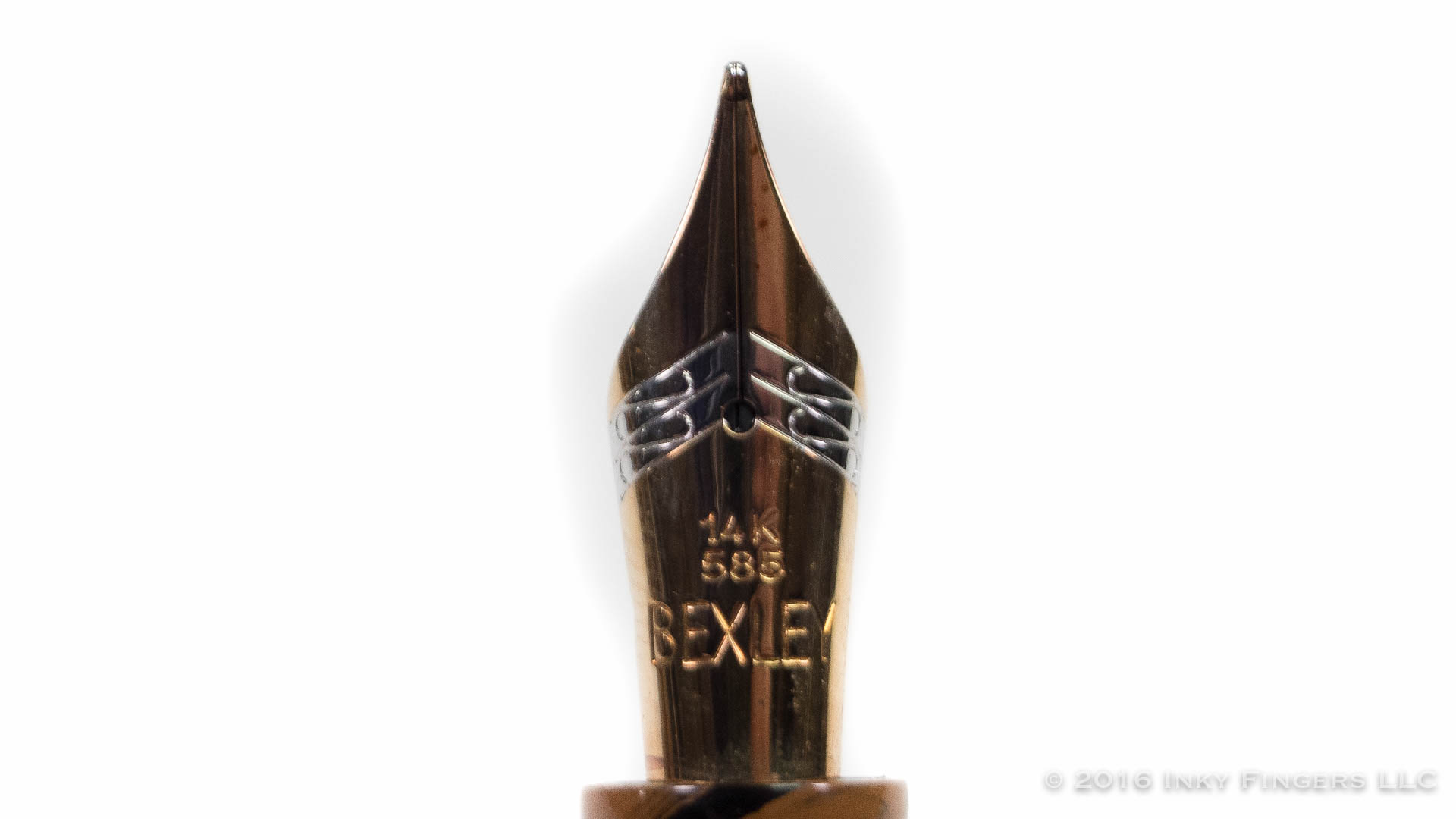 One and a half turns of the cap reveal a pretty standard-shaped section and an understated, but attractive, 14k gold nib. The nib is bi-color with a rhodium-plated arch across the middle of the nib’s face. The pen has a standard plastic feed, and fills using the standard international converter or cartridge methods. While I have not tried this, I assume the pen could be used as an eyedropper, as the section is made entirely of ebonite. (My only concern would be the method of assembly for the finial end of the barrel, and whether the pen might leak from that end.) 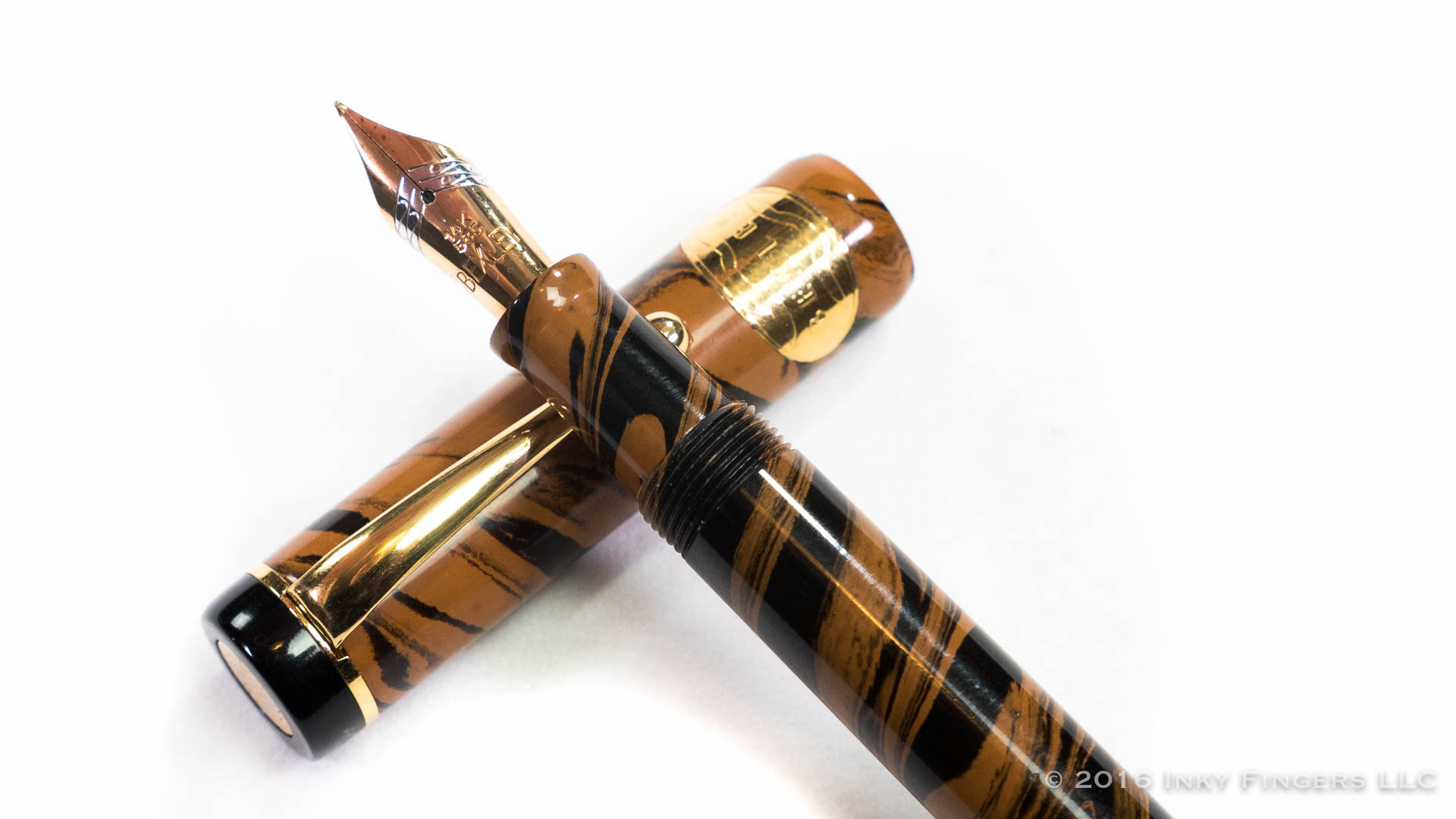 As a writer, the Bexley Ebonite exhibits many of the same superb characteristics of the Bexley Equipoise I reviewed earlier this same season. The Ebonite comes with a 14k gold nib rather than an 18k gold nib, however. The 14k nib is fairly rigid with a hint of bounce, but would be a better choice for someone who writes with a bit of pressure. The 14k nib was left with a bit more of that pleasant feedback than the 18k nib I reviewed, which would make it an ideal choice for people who don’t particularly care for that uber-glassy feeling of a feedback-free nib.

Aside from the slight increase in feedback, though, the 14k nib on the Ebonite is a beautiful writer. The ink flow is moderate, but rock-solid consistent. (I should note here, as I do in the video above, that I did experience a bit of ink starvation my first go-around with the nib, but that was because I didn’t clean the pen thoroughly before writing with it the first time. Once I did a thorough cleaning, the ink starvation issues went away entirely.) There were no hard starts or skipping, and the pen would write with only the lightest touch, as a pen should. I did miss the slightly bouncier feel of the 18k nib, but I have no complaints at all about the 14k.

In the hand, the pen is good for me, but perhaps not perfect. The section itself is comfortable, but a touch shorter than I normally like. And the threads on this pen are sharp. I have to make sure that I’m not letting my grip slide up the barrel as I write, and I keep it on the section. Once I got used to the feel of the pen in my hand, it became great, but it took me a bit of time to get the feel of the pen into my hand.

Uncapped, the pen is quite long enough for most anyone to use it unposted. This is good, as the cap does not post securely (or even well.) This is actually good because I wouldn’t want to mar the finish of the pen by posting. I adore the way the ebonite feels in my hands. The much-vaunted “warmth” of the material is present here in spades; it both looks and feels like a warm hug in pen form.

The Bexley Ebonite retailers from Vanness pens for $225. This is a good price for a nearly 20-year-old NOS ebonite pen with a fantastic gold nib that is as well made as this. If you are into ebonite pens, this is one you will want to check out. I enjoy it a lot.

The pen for this review was provided to The Pen Habit free of charge from black dating sites dallas in exchange for an honest review. No additional compensation was provided. All opinions expressed herein are my own.