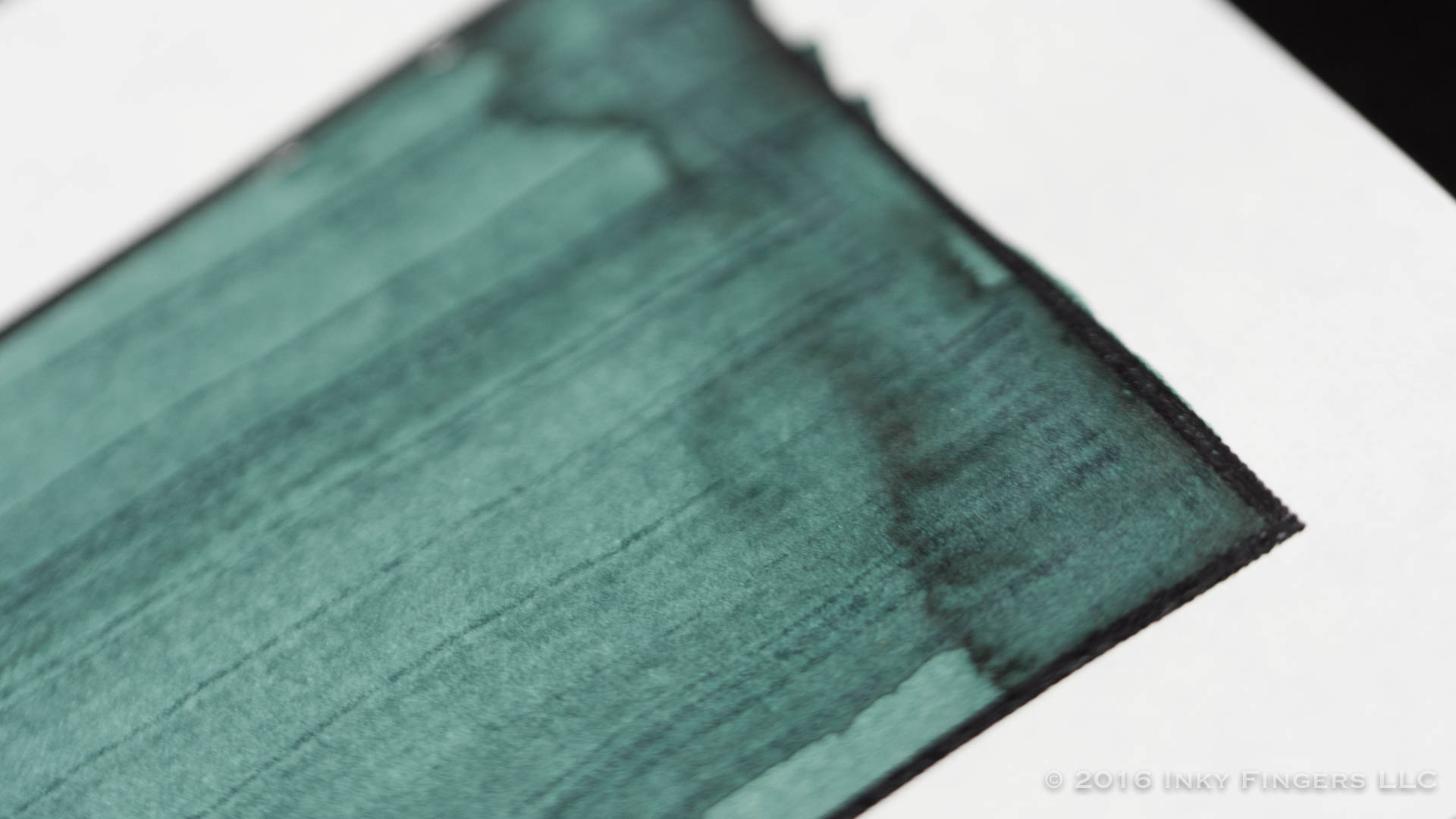 Hieronymus is a Swiss retailer that got its start in letterpress printing. Over the years, they have expanded their offerings to include a series of writing instruments, paper, notebooks, desk accessories, leather goods, and most recently, fountain pen inks. Their ink line is based on five colors: black, blue, green, brown, and violet. Each color in the line comes in three different varieties, numbered 01 (the most saturated version of the color) through 03 (the least saturated version.) 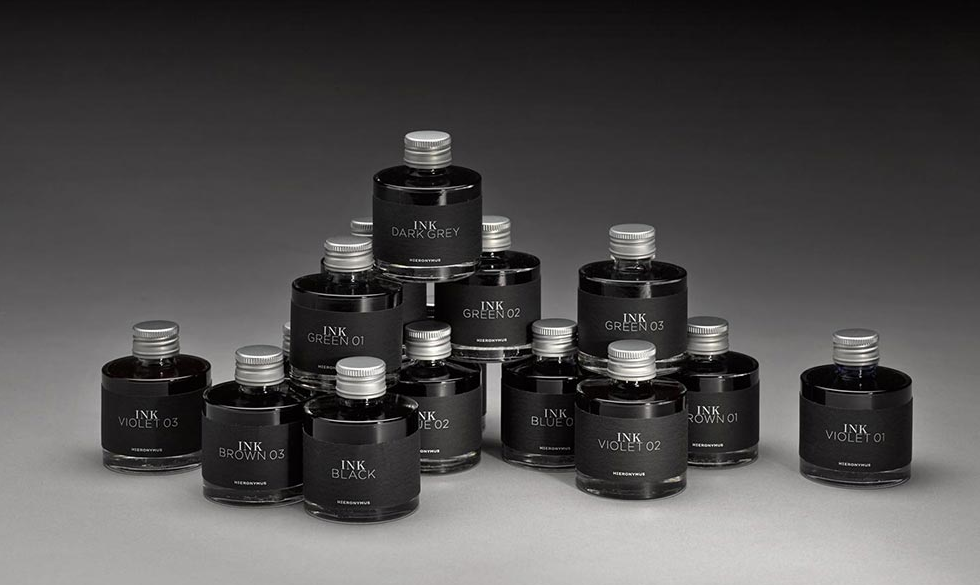 There is something deeply satisfying about the Swiss design style. There is an entire school of typography and graphic design called Swiss Design that emerged in the 1940s and 1950s. Helvetica, the clean-lined san serif font that has become the most popular font in the world, was designed there. Though I am not tremendously well-versed in the specifics of that design style, I would say that it is often embodied by clean lines, balanced layout, and an aesthetic that integrates modernism with deco influences. Hieronymus has certainly been able to incorporate the Swiss design style into their website and product packaging. It’s understated, sleek, and luxurious without being flashy or glaring. Even their bottles, though, simple, look refined. 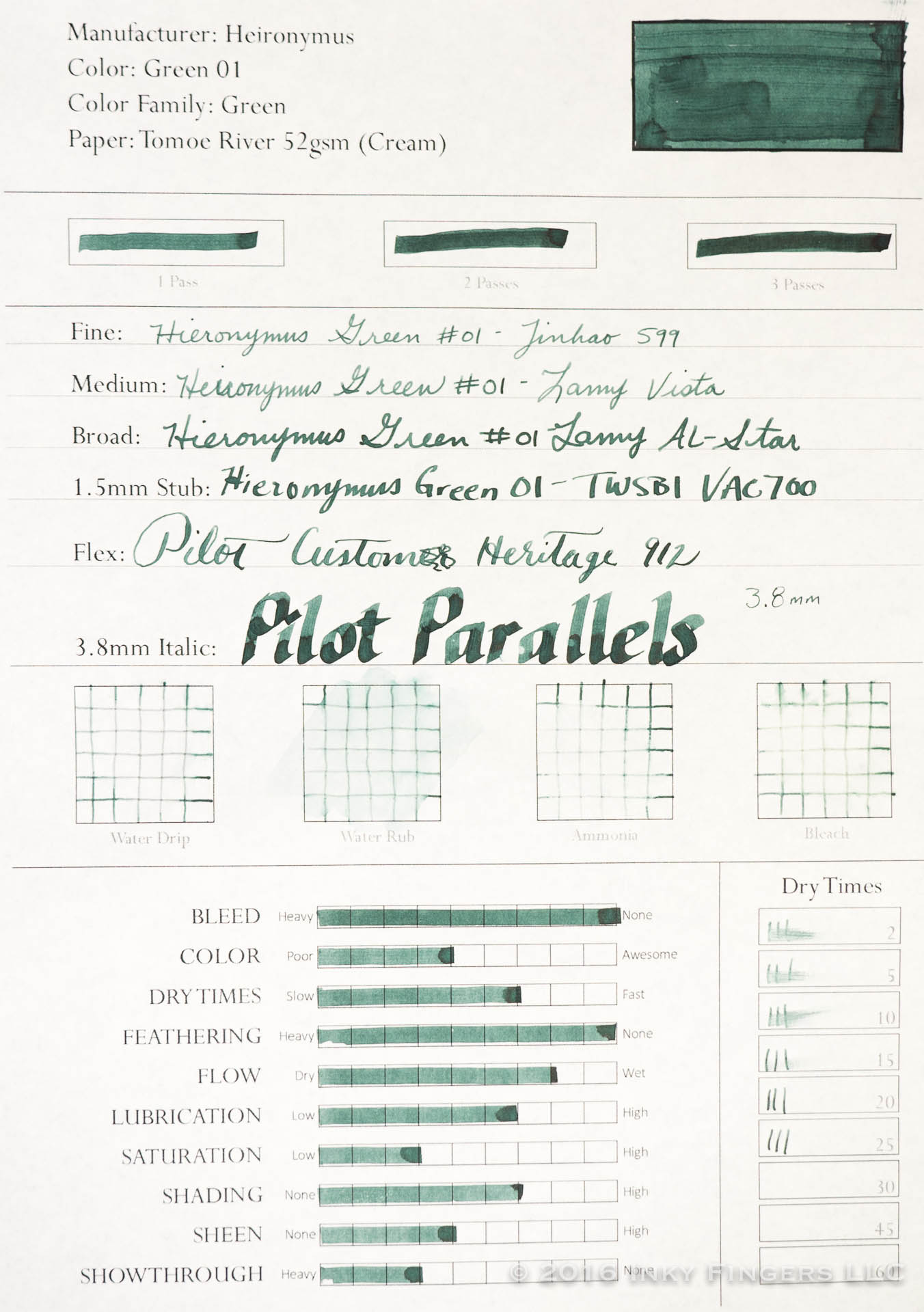 Right off the bat, you can see that understated quality in the ink itself. The color of Green 01 was muted–as much grey as it is green. This is a color in which I wish I could find a lovely cashmere sweater. The green grey combined with blue undertones reminds me of snow on blue spruce trees. In a fabric, this color could easily be considered a neutral, pairable with almost anything else. In an ink, the neutrality of the color feels washed out and rather bland against a field of white or cream-colored paper. 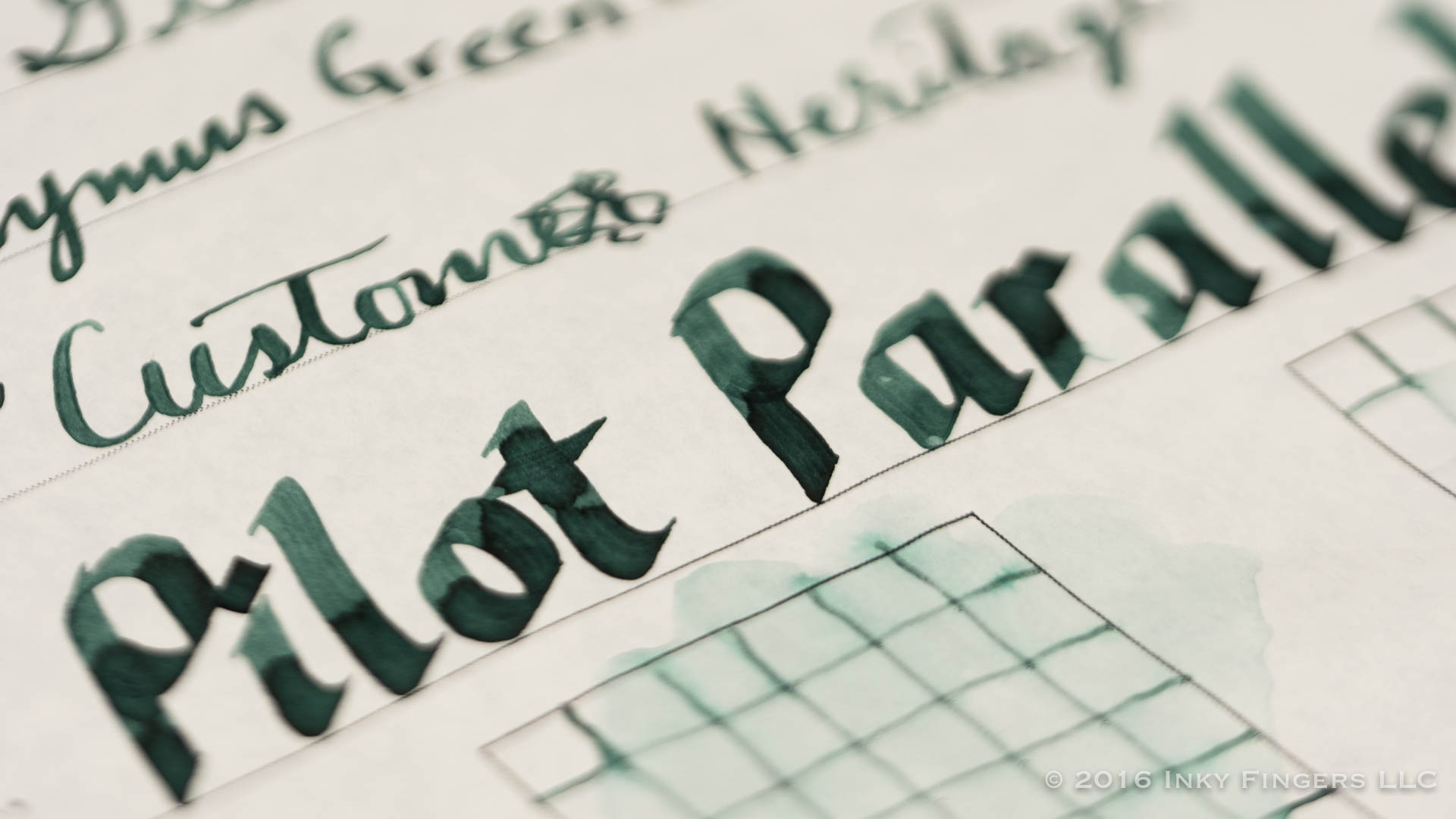 Even the most saturated variation of the green color (Green 01) wasn’t terribly saturated. That lack of saturation did make for some lovely binary shading. Despite that shading, however, the ink felt rather flat on the page. And as you can see from the difference between the images above the image below, the lack of saturation allows the color of the paper to have an outsized influence on the color. Cream-colored paper tends to make this ink appear more green, while white paper brings out more of a blue/teal undertone. 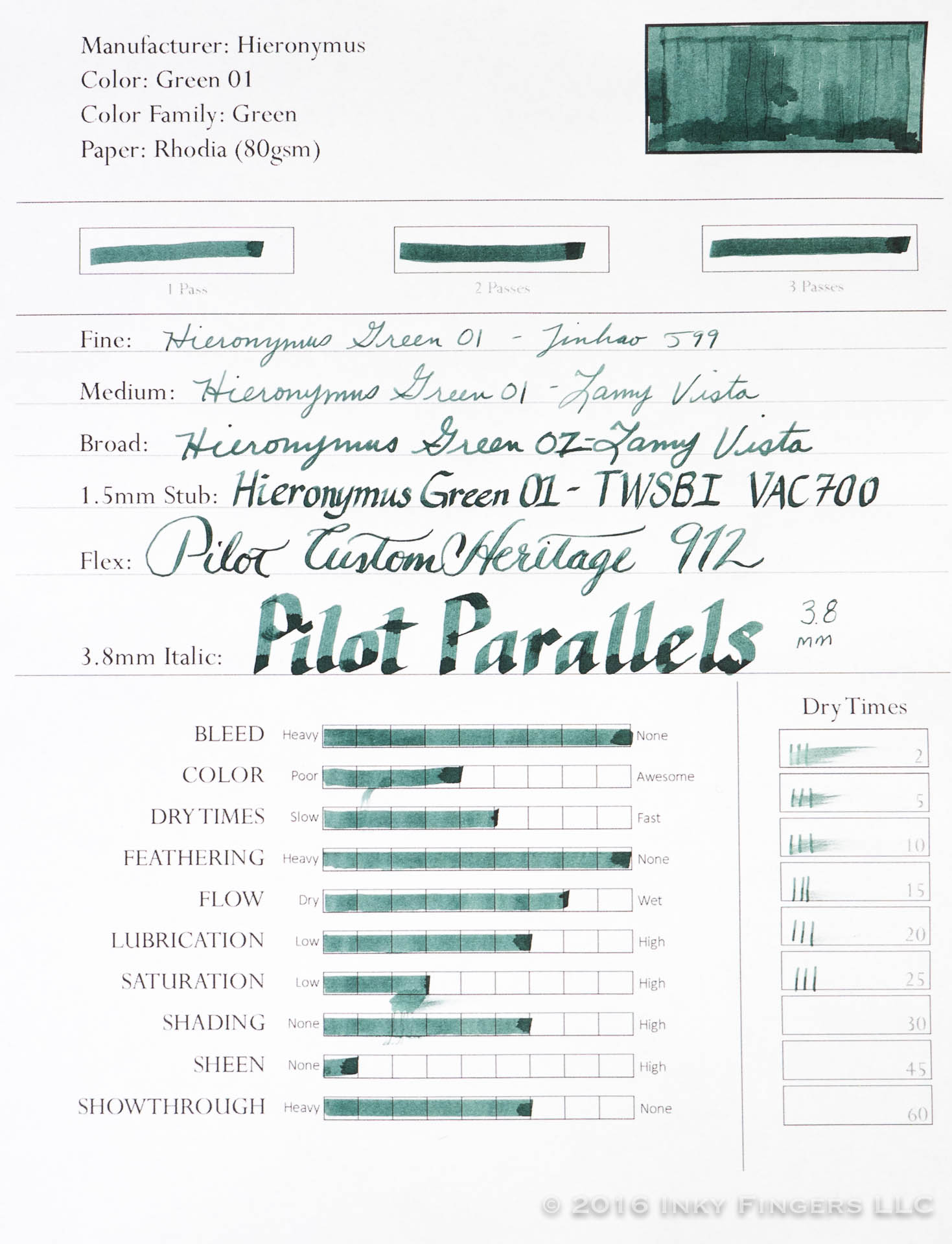 Overall the ink performed well on all three papers I tested. On Rhodia and Tomoe River there was no bleed, and the dry times were either average or slightly better than average. There was no feathering and the flow was north of generous. The ink felt decently lubricated. Show-through was present, but not horribly so. The ink isn’t liquid-proof, but the grey portions of the did show a bit of persistence in the face of the various solvents I tested. 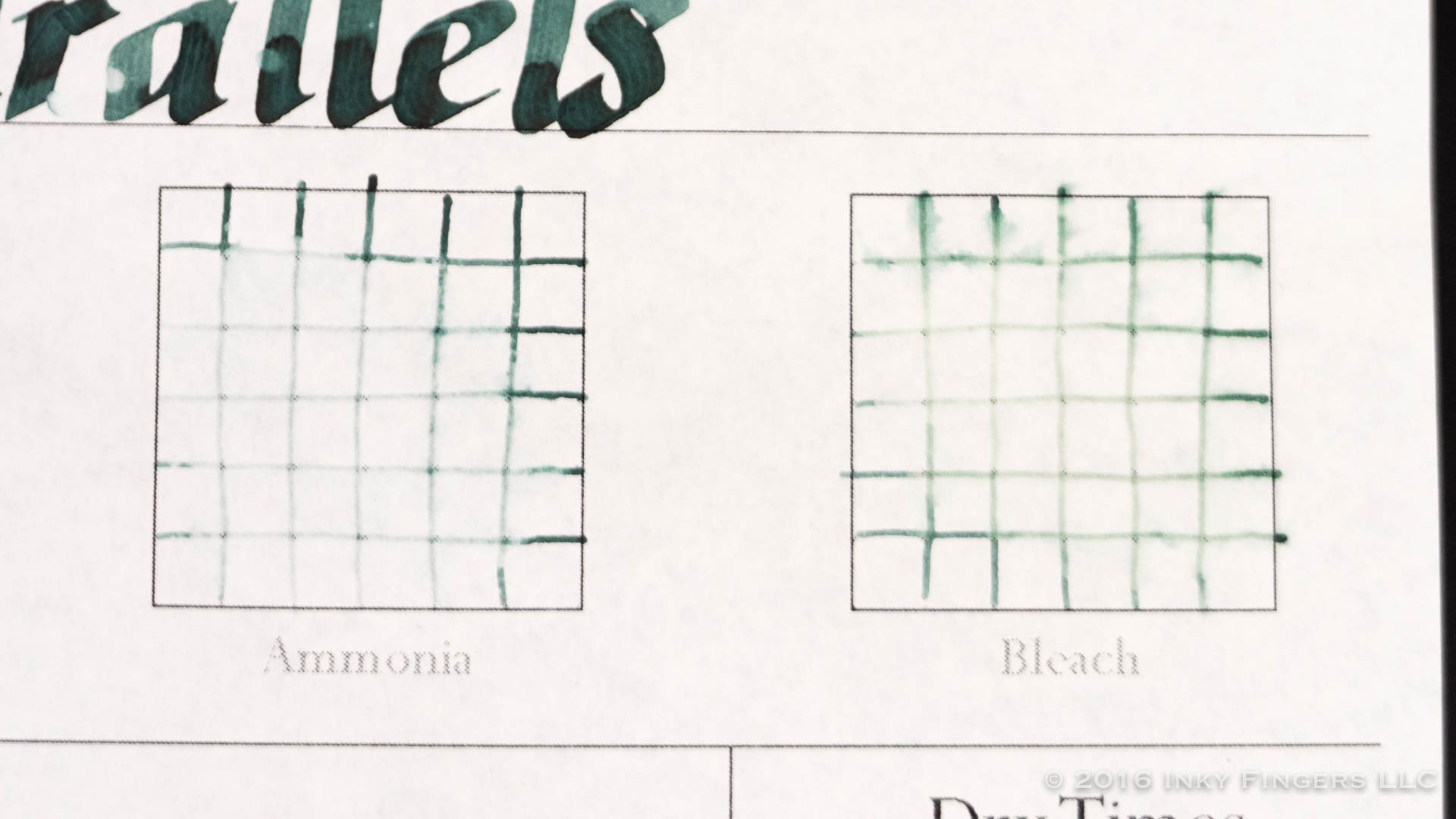 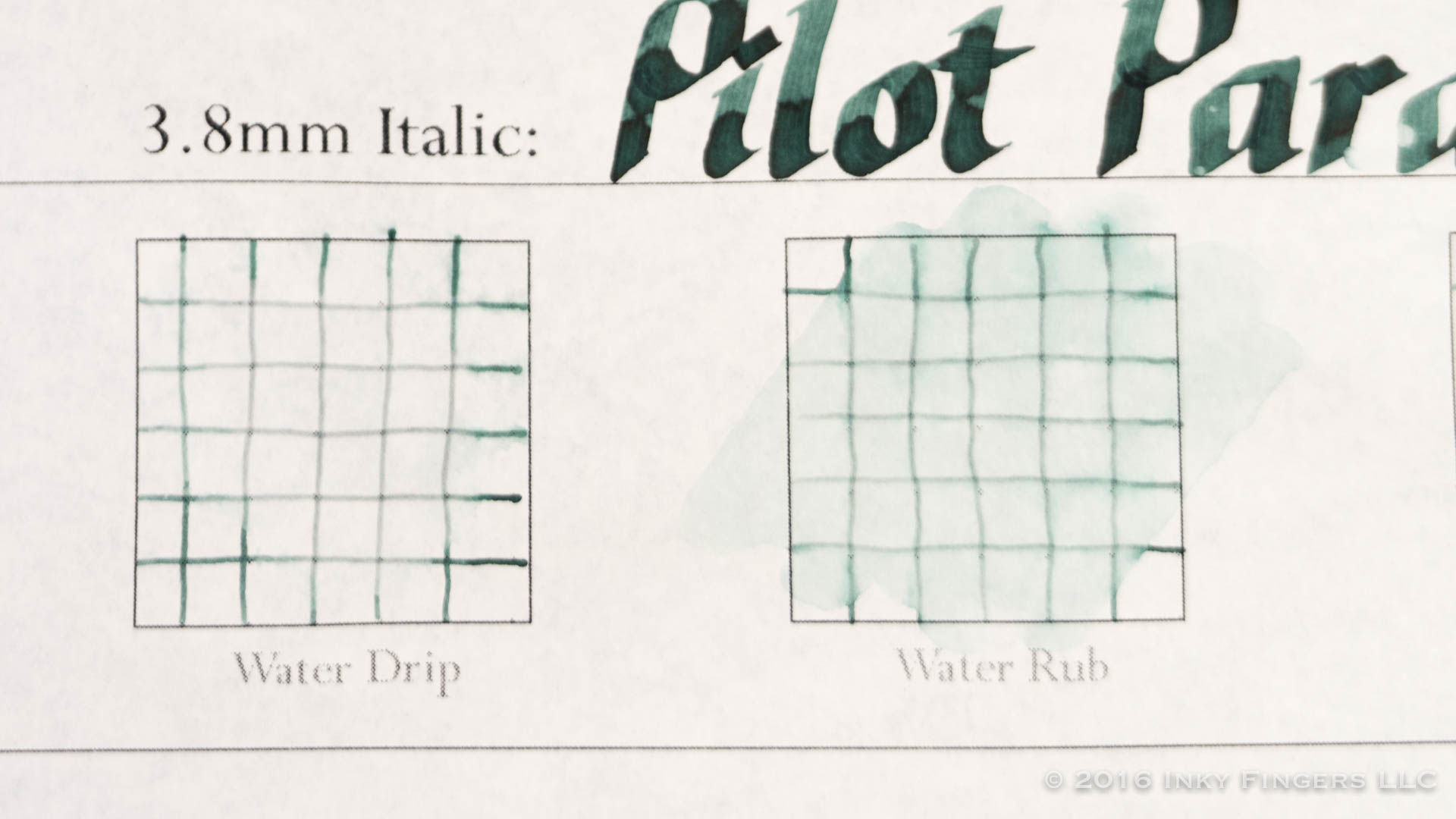 On low-quality paper, the ink doesn’t do quite as well. Dry times are very short, but that absortiveness means that shading is decreased a fair bit. There is some minor feathering, but writing remains legible. There is also some moderate bleed, even on the finer nibs. 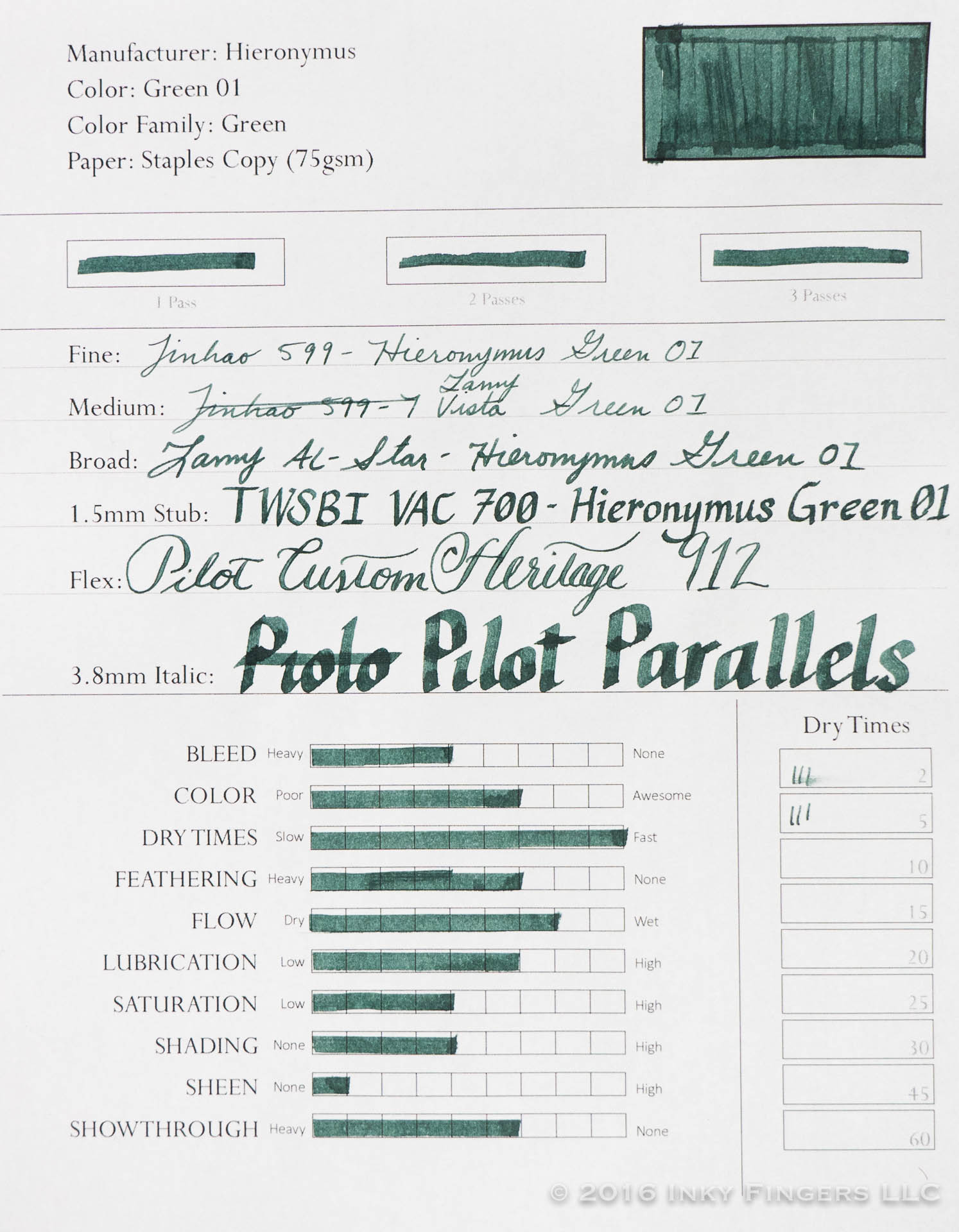 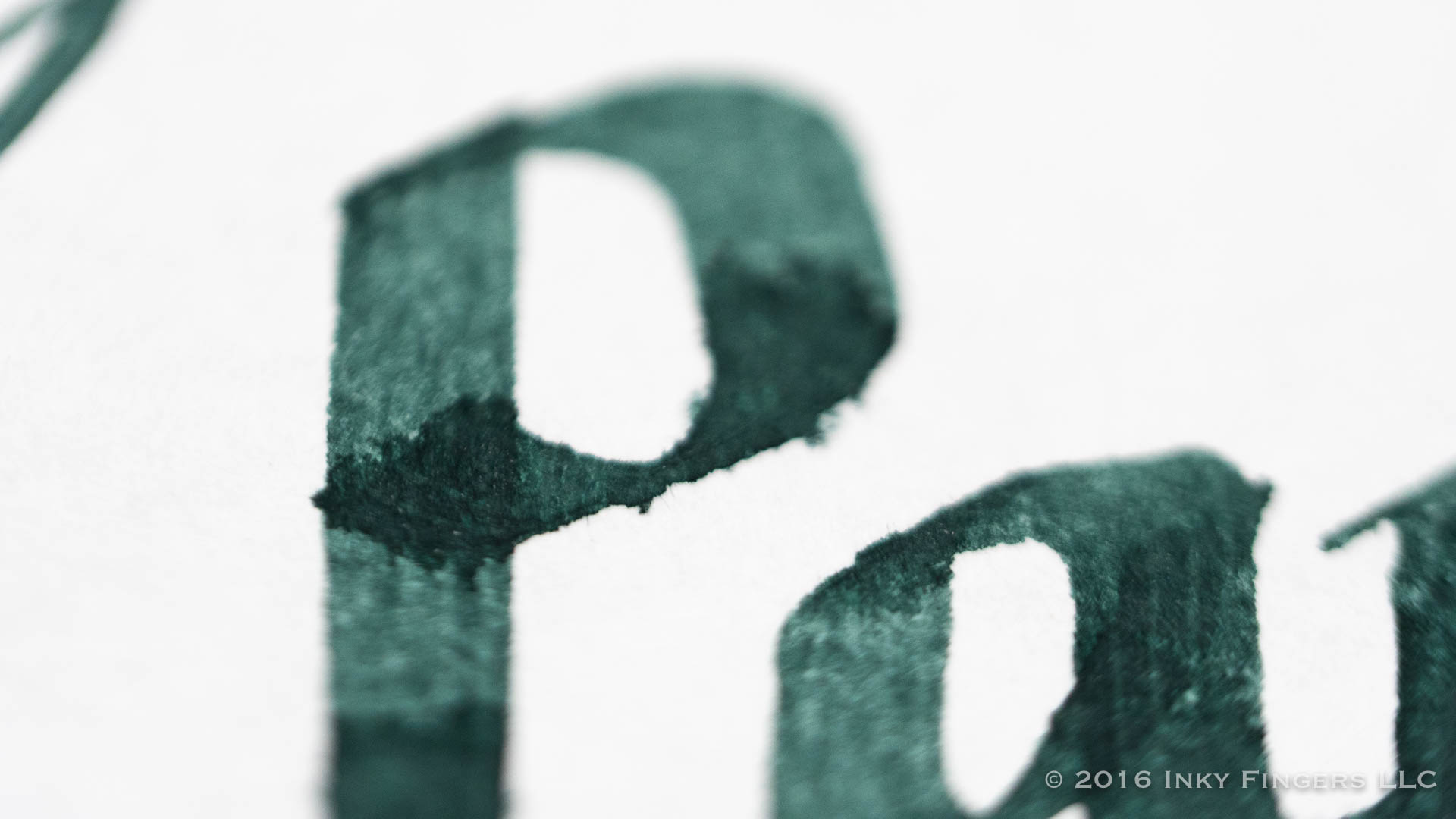 As you see in the chromatography strip below, this ink has a LOT of grey in it.

http://penhabit.com/hookup-subreddits/ is a really unusual ink. I don’t have any color quite like it in my collection of 170+ bottles. (In the video you can see that my comparisons really aren’t that comparable.) I really like the color balance between gray and green; I just wish the ink were more saturated. (Side note: In the video above, I do a comparison between Green 01 and Green 03 and the 03 is so unsaturated and light I don’t understand how the ink could possibly be used.)

For me, the price of this ink is a sticking point. It’s currently listed on the Hieronymus site for 48 Swiss Francs per 50ml bottle. (The current exchange rate with USD was very close to 1:1 at the time this blog post was written). Add international shipping, and that becomes more than $1 per ml…one of the most expensive production-line inks currently on the market. I don’t mind expensive ink so long as there is something about the ink that speaks to me: color, performance in the pen, some characteristic that sets it apart from cheaper offerings. This is an interesting, but unsaturated, color with only middle-of-the-road writing characteristics. There is not enough appeal in this ink for me to justify the high price.  (I sure would love to have a couple of those beautiful bottles sitting on my shelf, though!)

Disclaimer: A sample of the ink for this review was provided free-of-charge by Hieronymus in exchange for an honest review. No additional compensation was provided. All opinions expressed herein are my own.