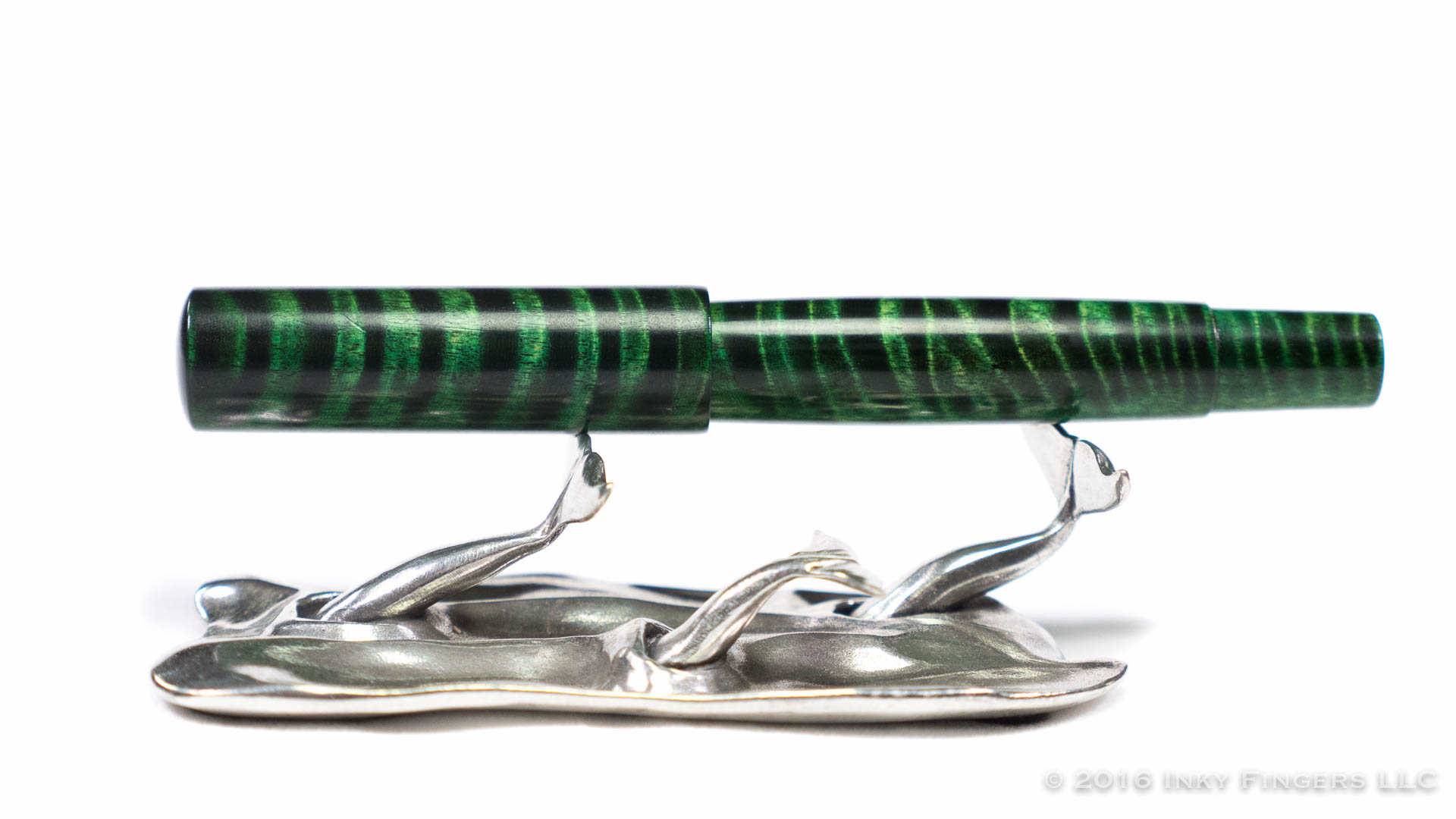 My first experiences with wood pens were not great. I was brand new to fountain pens (literally…my first ever pen was wood) and I couldn’t have told you what made a good pen from a bad pen. I just saw rows and rows of polished, waxed, or varnished wood, and knew I had to have one. What I got was a heavy, cheap kit pen; it had low-quality plastic parts and a less-than-stellar nib. When I started getting into fountain pens seriously and learned what features and characteristics I valued in a pen, I started to realize that the wood pens I had started my journey with were just not that good, and it rather soured me on the idea of wooden pens after that. And then I met Motoshi and Shuko Kazuno of Stylo Art Karuizawa at the Los Angeles Pen Show.

dating apps in london really redefined for me what is possible in the realm of wooden fountain pens. Made from high-quality Japanese woods, Stylo Art creations are well-built pens in lovely finishes. Perhaps the best part of these pens, however, is that Mr. Kazuno builds his wood pens to hold the nib section from Japanese pen manufacturers Pilot, Sailor, and Platinum. All of the Japanese big three pen manufacturers make excellent nibs, each with their own characteristics. It’s a nice change of page from the great majority of other pens from smaller manufacturers that all get their nibs from Jowo or Bock. You get all of the beauty of natural wood combined with an excellent nib unit held in a comfortable section with a feed that is capable of writing non-stop until you run out of ink. It’s a killer combination. 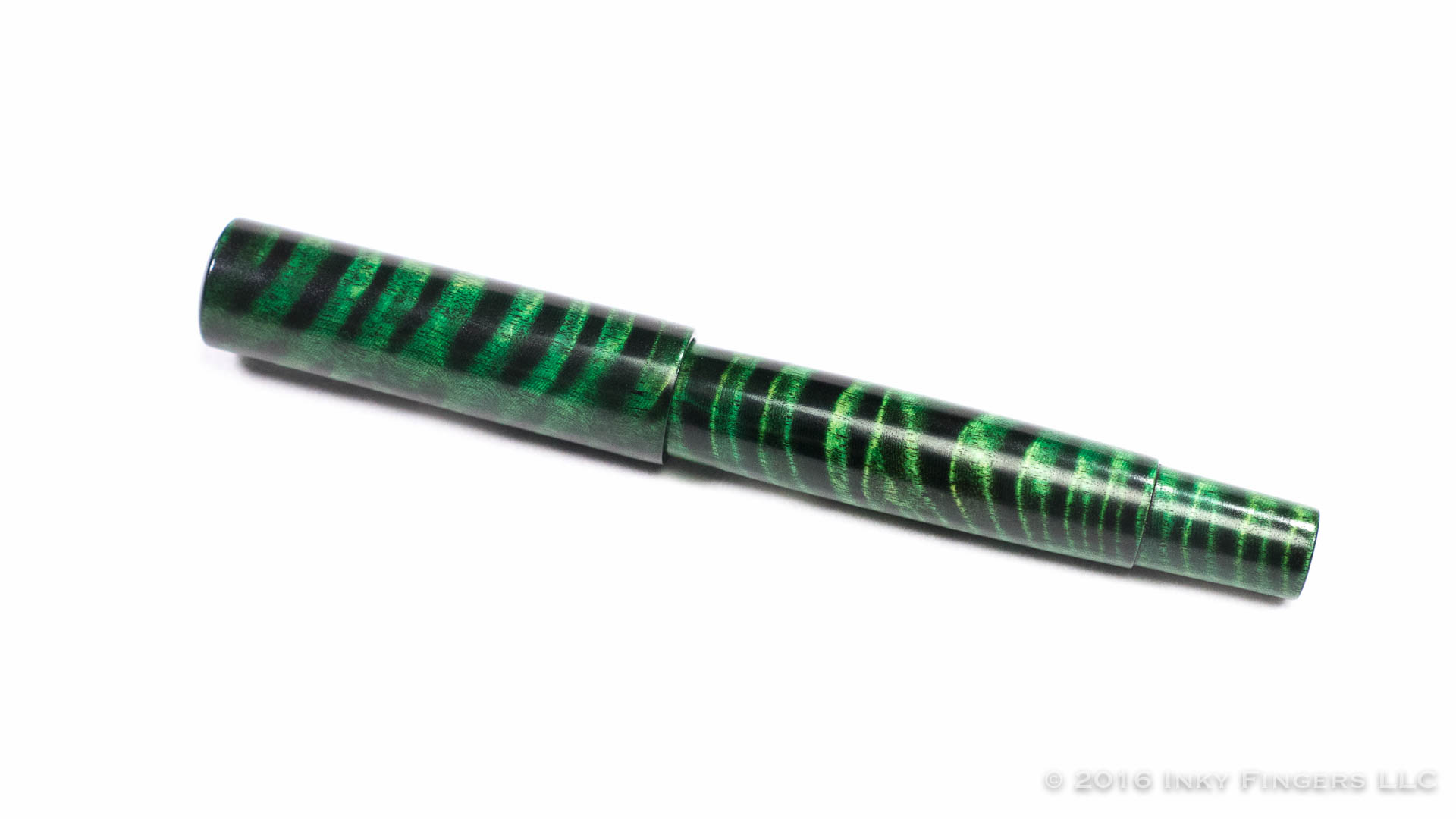 Wood can be a very tricky material when it comes to pens. Wooden pens have a tendency to run on the heavy side. And wood is a natural material that will continue to “breathe” long after the pen is finished. Wood is generally quite porous, and can discolor if you get ink on the wood itself, meaning that you can’t easily make a section out of wood. Yet somehow, Mr. Kauzno manages to strike all the right notes with his creations. The pen I purchased from the Kazunos at the LA show was one of their “Taut” models. It is flat(ish)-topped model with a cap and barrel made entirely from Japanese curly ash wood. The highly figured wood is beautifully turned and shaped, then it is dyed green and coated with Urushi lacquer. 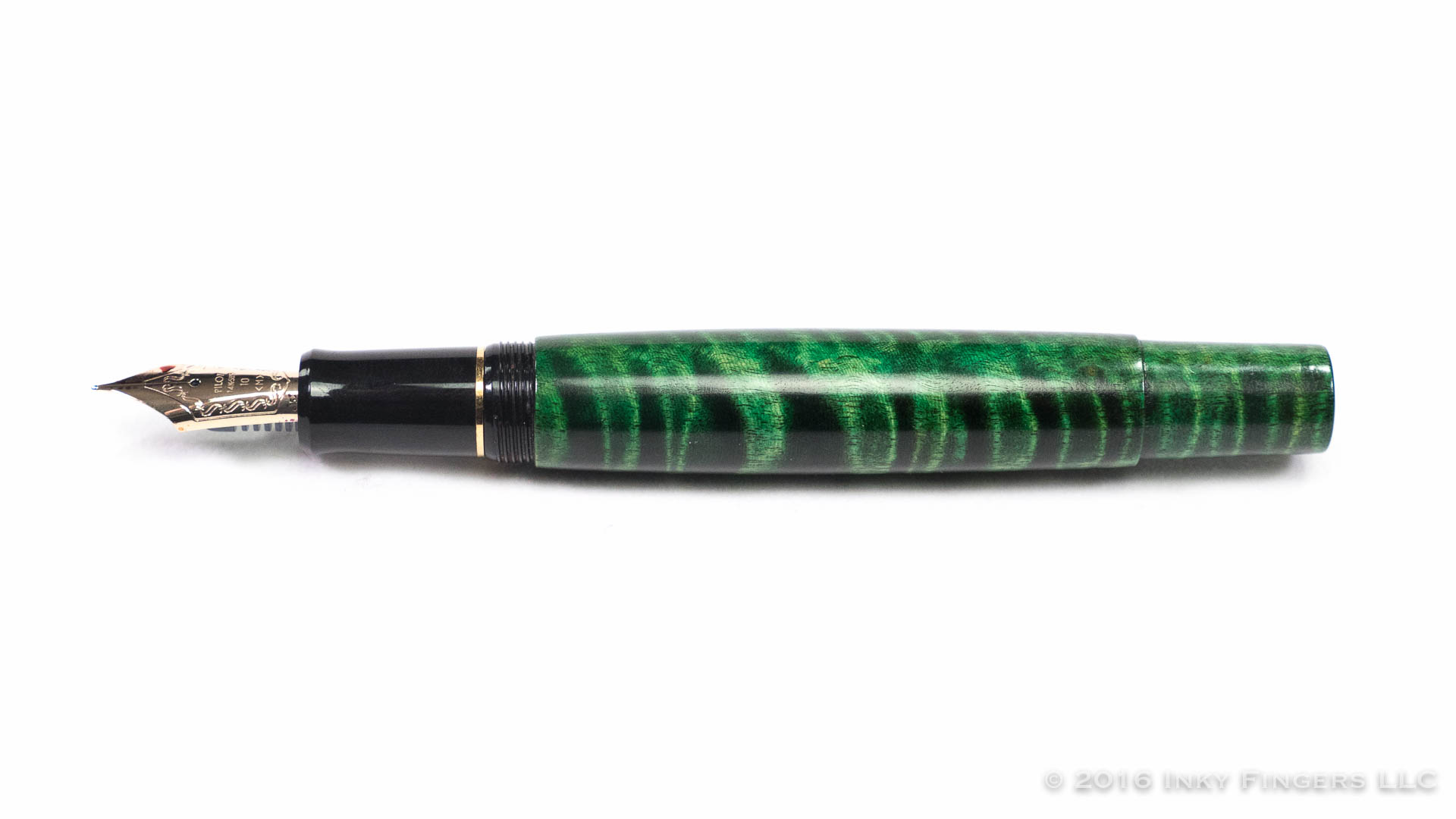 It’s a decent-sized pen–about the same length as a Pelikan M800, but a touch wider in diameter. In spite of that size, it’s a surprisingly light pen. This is the first time I’ve ever used a pen with urushi over wood (urushi is usually applied over ebonite for pens), but I am already a big fan of the feel in the hand. The pen has a wonderful warmth and natural feel that I find lacking from many acrylic or resin pens.  The urushi also brings out the vibrant, rich green the color of a perfectly manicured lawn. It’s a beautiful pen to behold, and one that kept drawing me back to their table over and over again during the four days of the show. 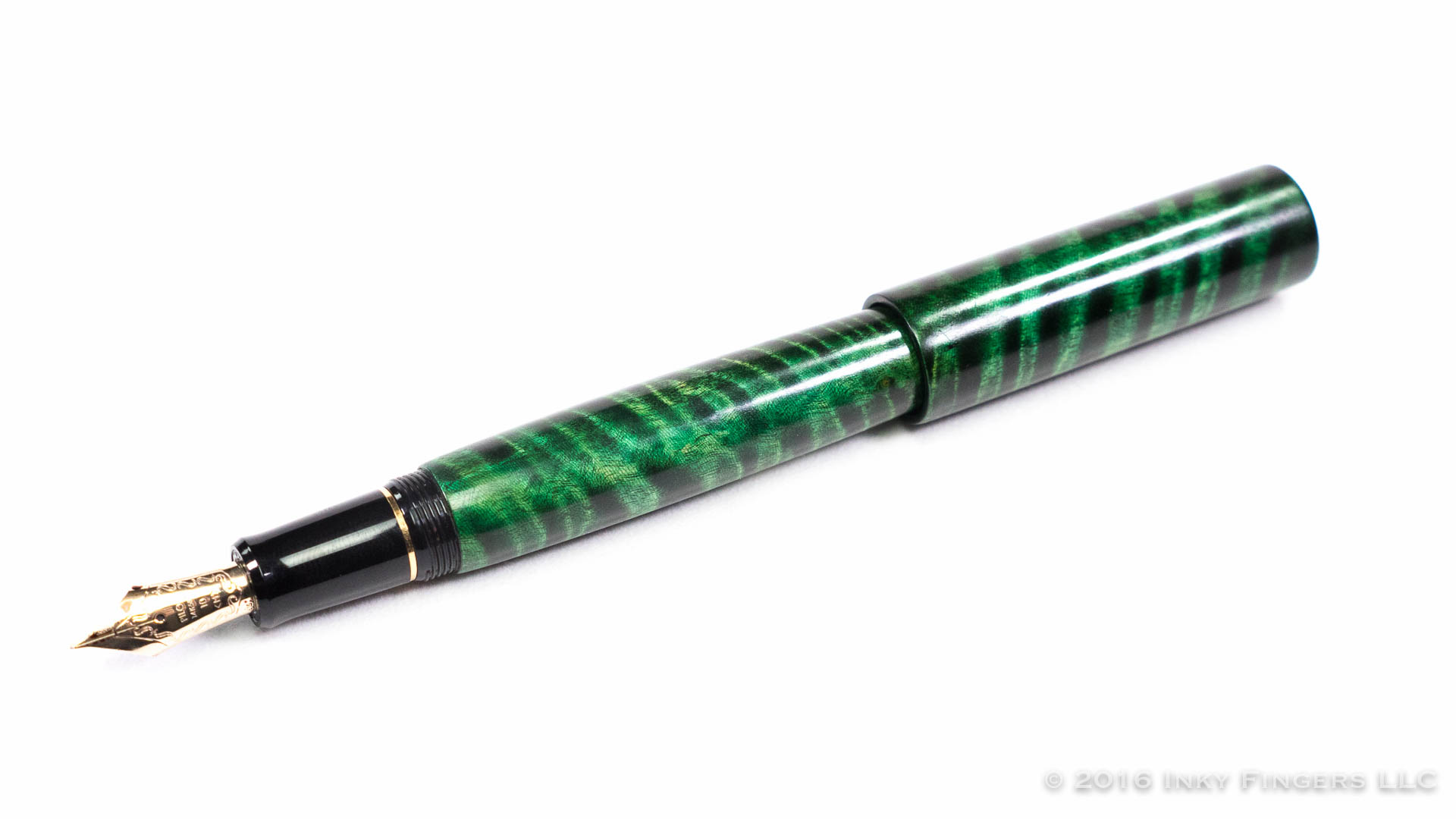 The end of the pen’s barrel has been narrowed so that the cap can be posted. When posted, the pen is a bit on the long side but is so light that the extra length doesn’t matter. I normally would not post pens like this, but as you’ll notice from the photos above and below, this pen doesn’t have a clip or roll-stopper of any kind. As a result, I find myself posting this pen on a fairly regular basis to keep the cap from rolling away from me or getting knocked off the desk. Since the cap doesn’t have a negative impact on the balance of the pen, I don’t mind using the pen posted at all.

One of the downsides of this pen’s construction is that it isn’t perhaps as robust as a pen made from acrylic. The wood can get scratches or gouges easily enough that I don’t really feel comfortable taking this pen with me in a soft-sided case as a daily carry. (See also the above paragraph regarding a lack of clip or roll stopper.) I generally tend to treat this as a desk pen for writing at home, which suits me fine as this pen best shines for the kind of longer-format writing I tend to do at home rather than the shorter, note-based writing I do outside of the house. 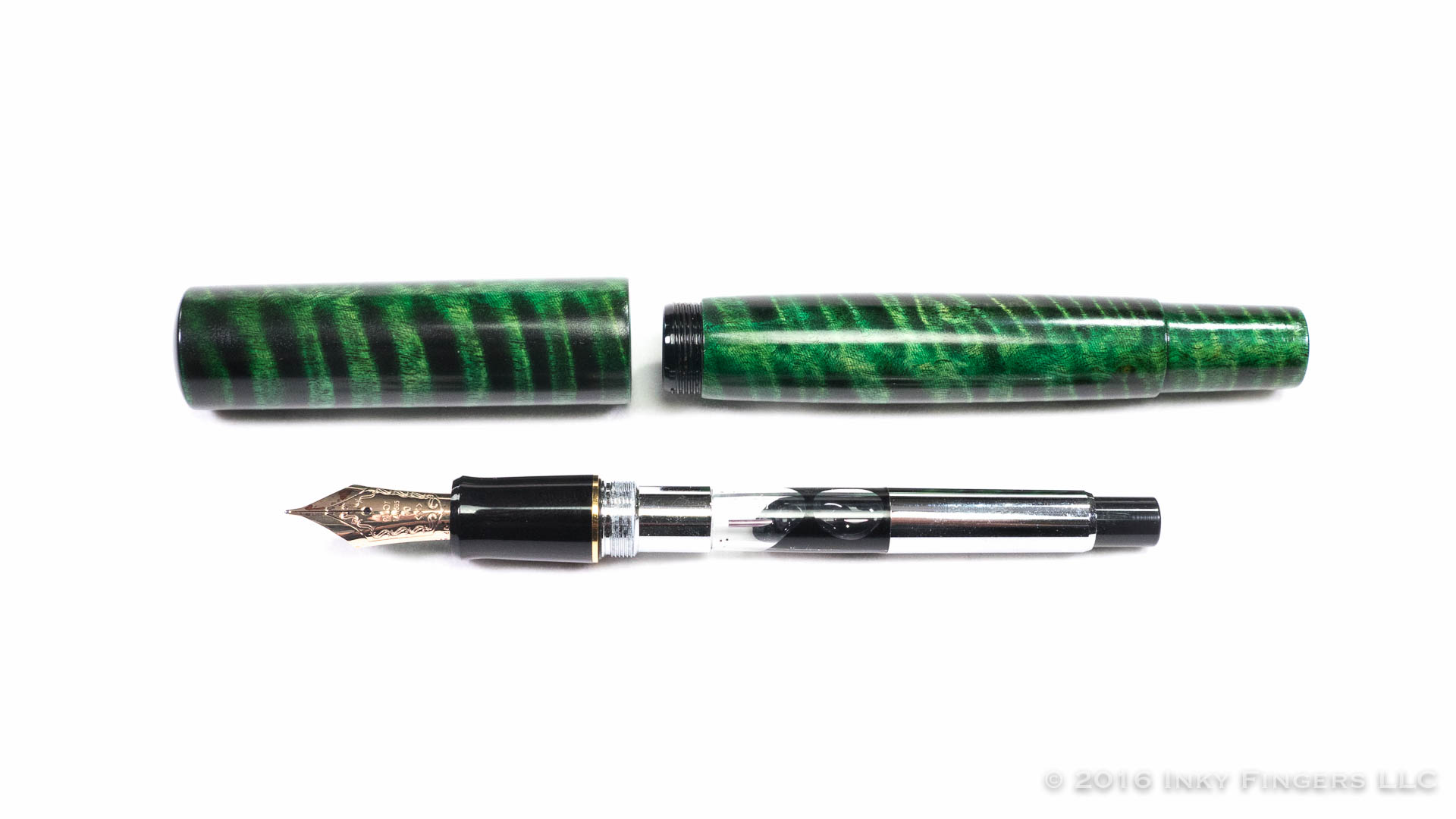 My pen was made to use a #10 Pilot nib. And, like all but a few Pilot pens, the nib unit uses Pilots proprietary cartridge/converter system. Any converters or carts that fit your favorite Pilot should also fit this pen, including their largest (and in my opinion, best) converter, the CON-70.  It’s a large button-filler converter with a nice ink capacity. It’s a right PITA to clean out, but I have found that it performs far better the other converter offerings. I’m glad that the pen’s barrel is large enough to accommodate this larger-sized converter. 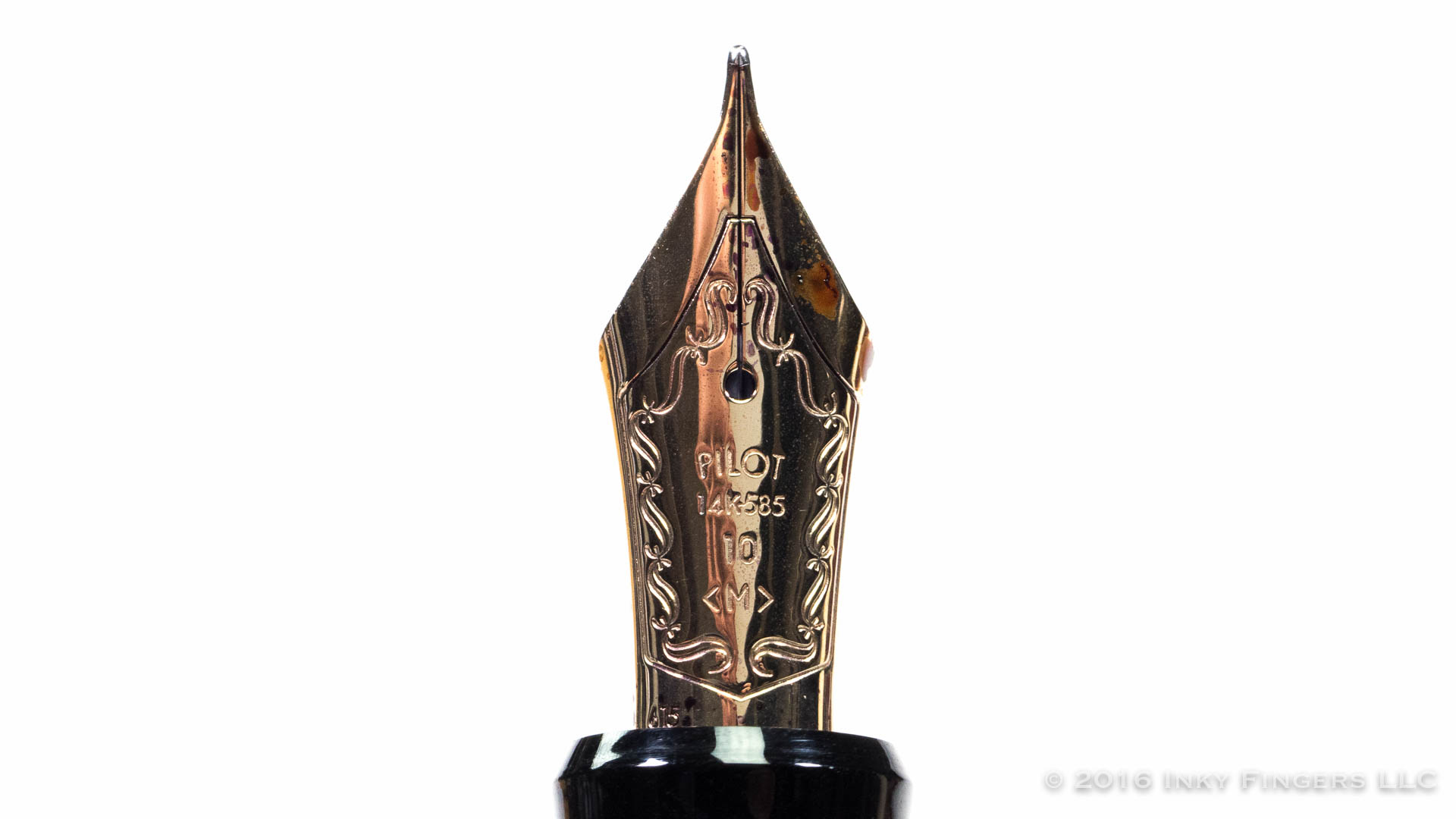 This Pilot #10 nib is the same size of nib found in many of Pilot’s middle-to-higher tier pens like the Custom Heritage 912. By the time I had convinced myself to pull the trigger on this pen, I was a bit disappointed to discover that my preferred nib gauge for Japanese pens, Broad, was no longer available. I went with a medium instead, and I’m actually really glad that I did. The line itself is moderately wet, and a bit wider than you might expect for a Japanese medium gauge pen. But my goodness is it a wonderful writer. 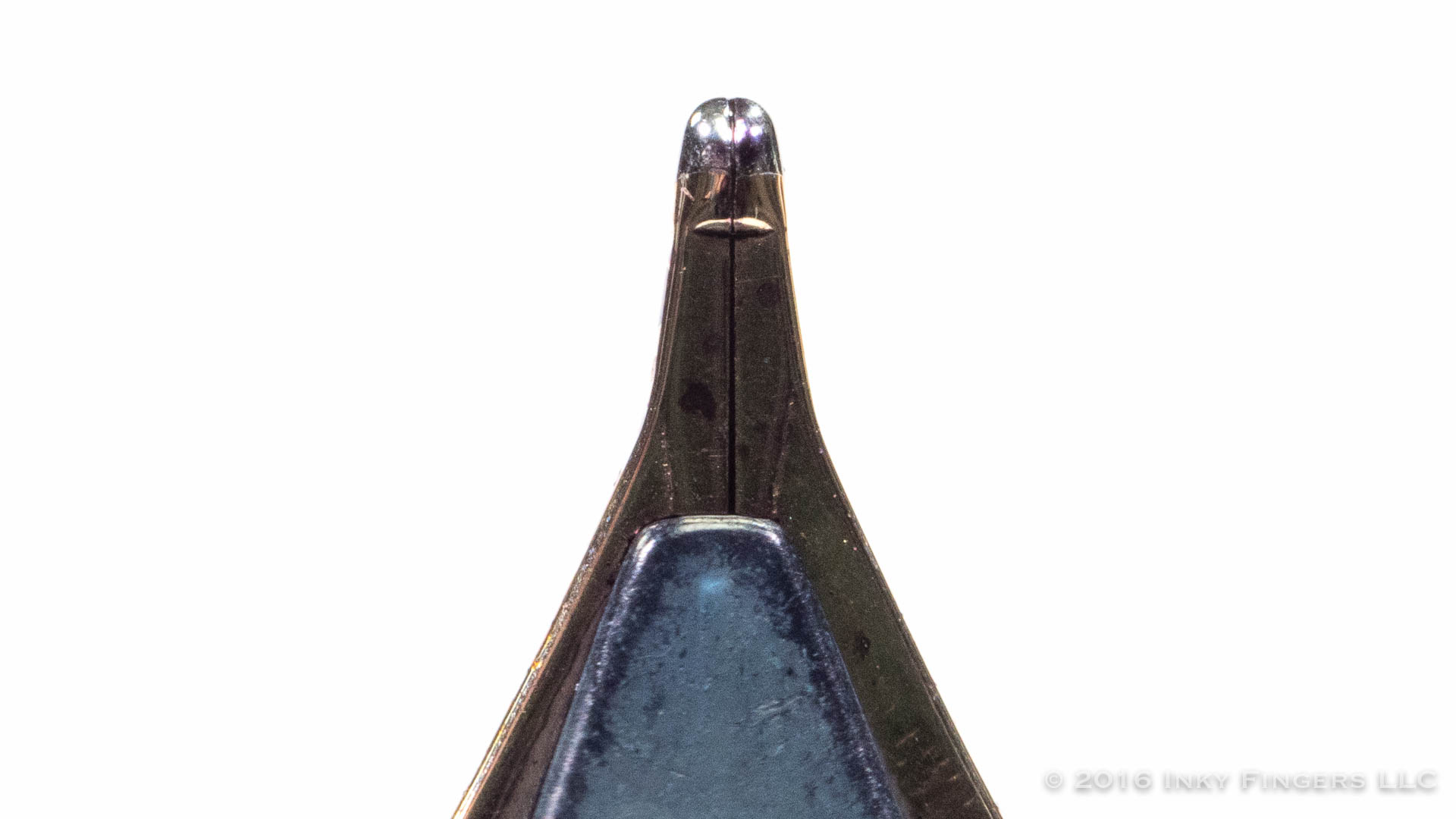 Pilot’s nibs are always very good. From the $4 Petit1 up, their nibs have always been great writers, nicely adjusted for a moderate ink flow, and rock solid. (The one exception to that is the FA nib, but I think that’s just a case of the feed not being able to keep up with the amount of ink flow required for flex writing.) I really enjoy the feel of Pilot’s gold nibs, especially. The nib on the dating as a jehovah's witness that I received was in keeping with every other Pilot pen I’ve ever owned but felt as though perhaps a bit more work had been done to the nib. It felt as though it had a bit less feedback than I usually find, although that may just be my imagination. There is just the perfect amount of pleasant feedback to let you know your nib is on the paper, where I tend to find most Japanese nibs too feedback-prone. And the adjustment was such that this nib reached true nib nirvana: being able to draw a consistent line with no pressure applied at all. 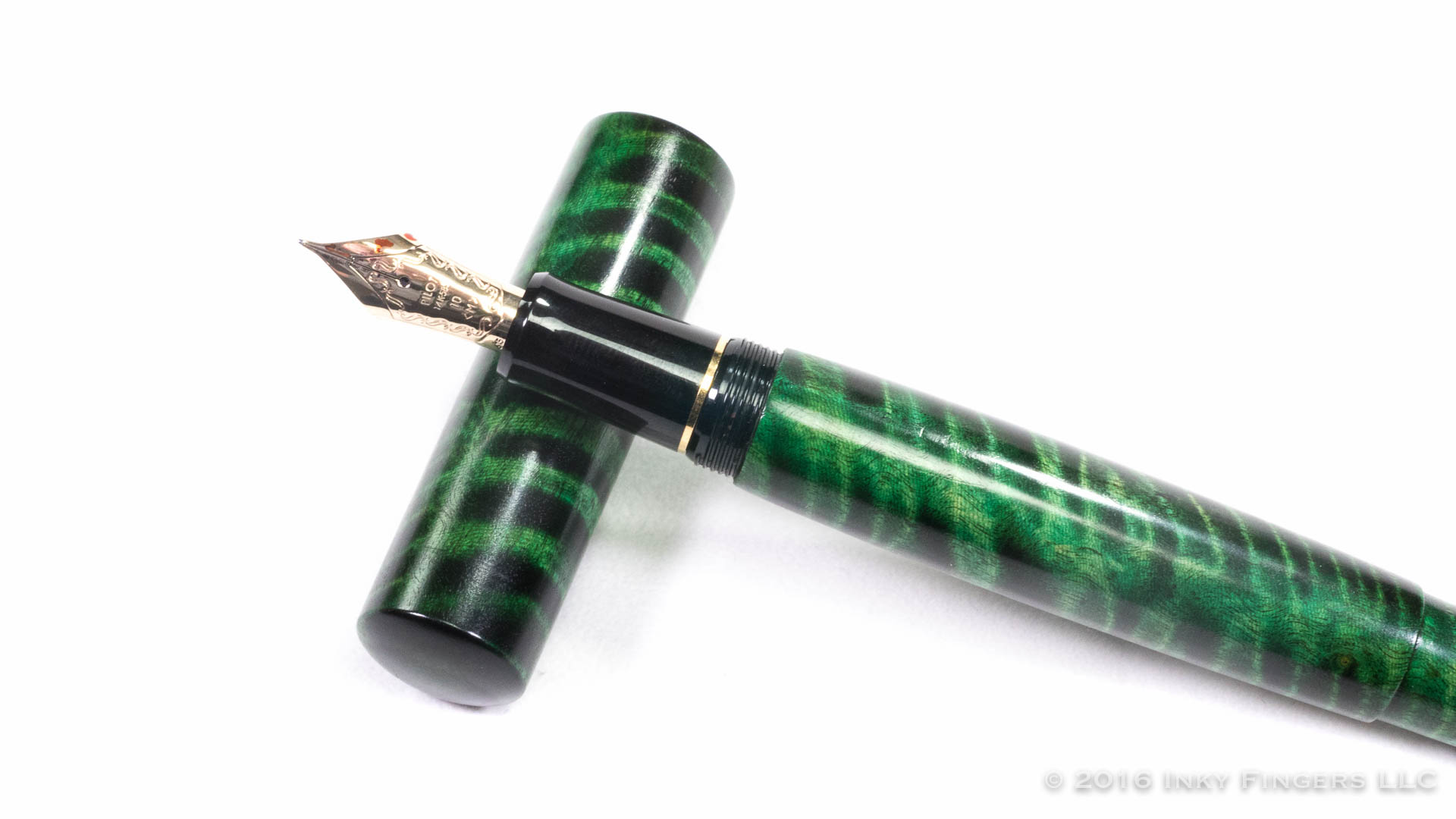 As you might expect, being a hand-made, intricately-finished work from a small company, this pen is not the cheapest in the world. If you’re familiar with urushi work, however, it probably is less than you might expect. This pen sold at the LA Show for $400, which is pricey but within what I would consider an acceptable range for this quality of craftsmanship. The combination of the pen’s light weight, beautiful finish, and a sublime nib for writing, I find myself turning to the dating as a jehovah's witness more and more frequently when I know I’m going to be doing long-form writing. I can write pages upon pages of text without wearying or cramping; the pen always keeps up and looks fabulous doing so.

$400 is a lot of money to spend on a pen or a brand that you don’t know much about. In the case of this lovely curly ash pen, I’m glad I did. It has helped re-shape my thinking about wood as a material for pens. It has brought me to one of my favorite pens for long-form writing. And it introduced me to a brand I hadn’t heard of before, but that I plan to get to know a lot better. As I state in the intro of the accompanying video, one of my tests for how good of a fit a pen may be is in how tempted I am to get another one…and I hope to be able to buy another Stylo Art creation for myself when I see the Kazunos at the DC Show in August.