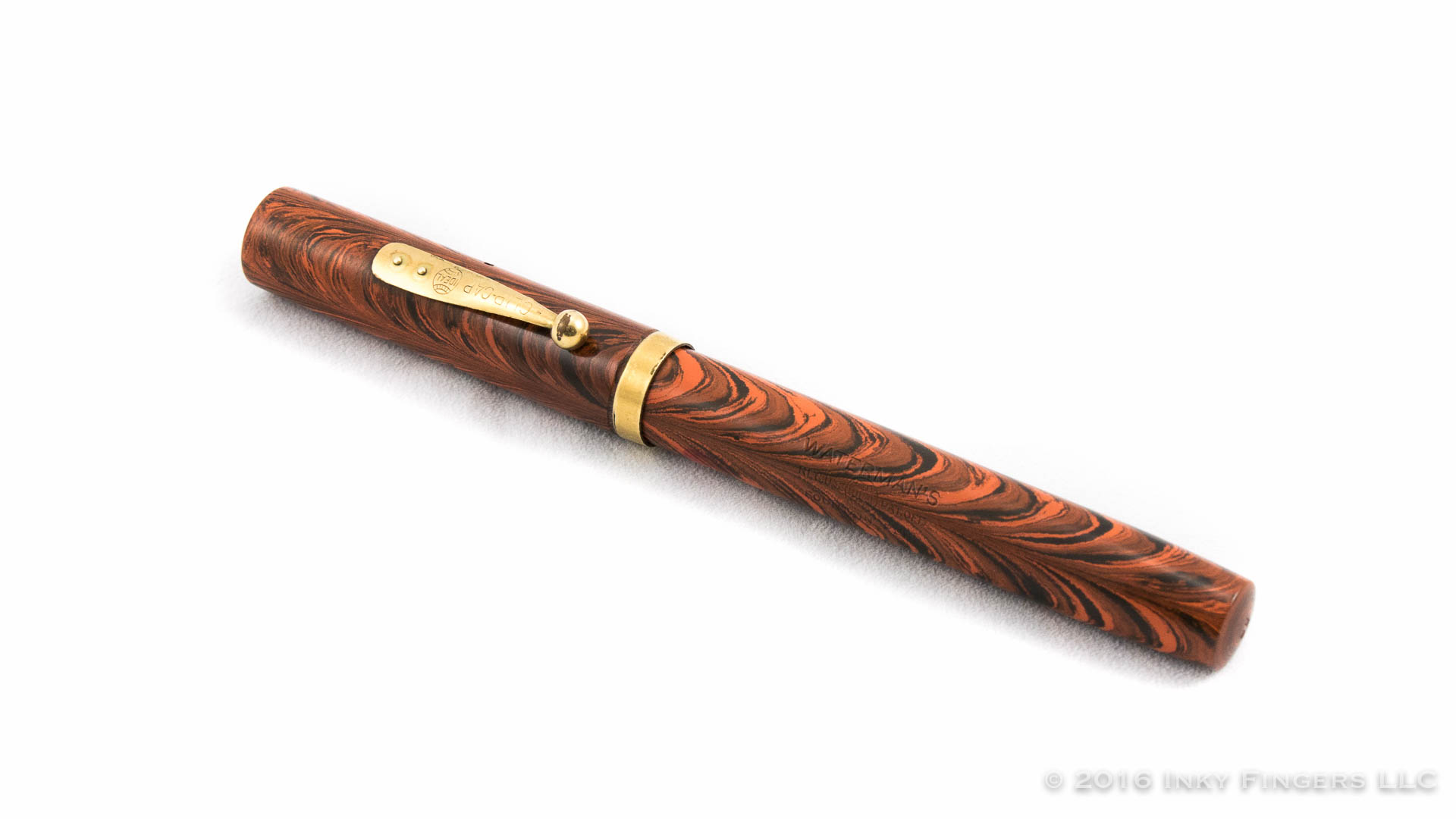 In nearly four years of fountain pens, I haven’t invested a lot of time in learning about vintage pens. As the kind of person who likes to know what he’s getting, likes to know what things cost, and likes things that look shiny and new, vintage pens have never held a great deal of interest for me. Coupling that with the fact that most vintage pens are significantly smaller than their modern cousins, I have often felt that the uncertainty and risk of vintage pens simply outweighs their usefulness of writing instruments. But you can’t participate in this hobby for long before the lure of vintage pens can start calling.

After my experiences at the LA pen show in February , I decided that I wanted to become more well-versed in the vintage pen portion of the hobby. My biggest goal was to gain knowledge: as someone who is often asked for advice and information about pens, I wanted to have at least a dilettante’s knowledge of vintage pens. Plus, vintage pens are such a huge part of the pen collecting hobby, I felt as though my own educational journey has been incomplete due to my strong preference for modern pens.

In June, I travelled to Utah to attend a family wedding. Shortly after my own introduction to the hobby in 2013, I inoculated my cousin-in-law Joey with FPV (fountain pen virus) and he then passed the infection on to his young sons. They live in Indiana, and I don’t often get a chance to see them; knowing that we would be together we decided to bring our pens and inks. The morning of the wedding, the men in the family (who, everyone knows, are just in the way the day of the wedding) gathered at my parents’ house to “play pens,” and for several hours we ogled each other’s collections, worked on nibs, and had a good time nerding out over writing instruments. Toward the end of our session, Joey pulled out a couple of old pens, and my heart stopped.

“Hey, I have a family friend who gave these to me. He said they used to be his school pens and were just sitting in a drawer. They don’t work at all, so he said I could have them. Do you think you could do anything with them?”

In his hand, he held two rods of red ripple ebonite, the trademark material of vintage Waterman’s Ideal fountain pens. Both pens had been abandoned for years, and the sacs in each had completely ossified, and both had dried ink in the nib and feed. The smaller of the two was a Waterman’s Ideal 52 1/2v ringtop, a small golf pencil-sized fountain pen with a ring for hanging off a pocket chain or necklace, sporting what turned out to be a full-flex nib. (You can see my review of a different http://penhabit.com/flirt-4-cam/ http://penhabit.com/couple-dates/.) The other pen was a surprisingly large model with which I was unfamiliar, the Waterman’s Ideal No. 56. I agreed to take them home, repair them and get them writing, review them, and return them when I was done.

Waterman is one of the most recognized manufacturers in the history of fountain pens. Making pens from the 1880s onward, they were responsible for (or at least claimed responsibility for) inventing what would become the modern the fountain pen. There is a fascinating essay on the history of Waterman that casts some doubt on these claims, at least in part. You can read it at http://penhabit.com/flirty9-dating-site/.) Regardless of the real story, Waterman was, for many years, the leading manufacturer and seller of fountain pens in the world. In the early days of their manufacture, Waterman fountain pens were made mainly of black hard rubber (also known as Ebonite.) Starting in the 20s, colored hard rubbers started appearing on the market. (Parker, for instance, introduced “Big Red” and “Mandarin Yellow” models of pens.) In 1926, Waterman introduced what was to become something of a trademark Waterman material: Red Ripple ebonite. This ebonite, featuring striations of orange-red and black ebonite in a highly-figured pattern, became quite popular. (There were also a blue/green ripple, an olive/black ripple, and a red/yellow (a.k.a. “rose”) ripple, but those colors are significantly less common than the red/black ripple.) 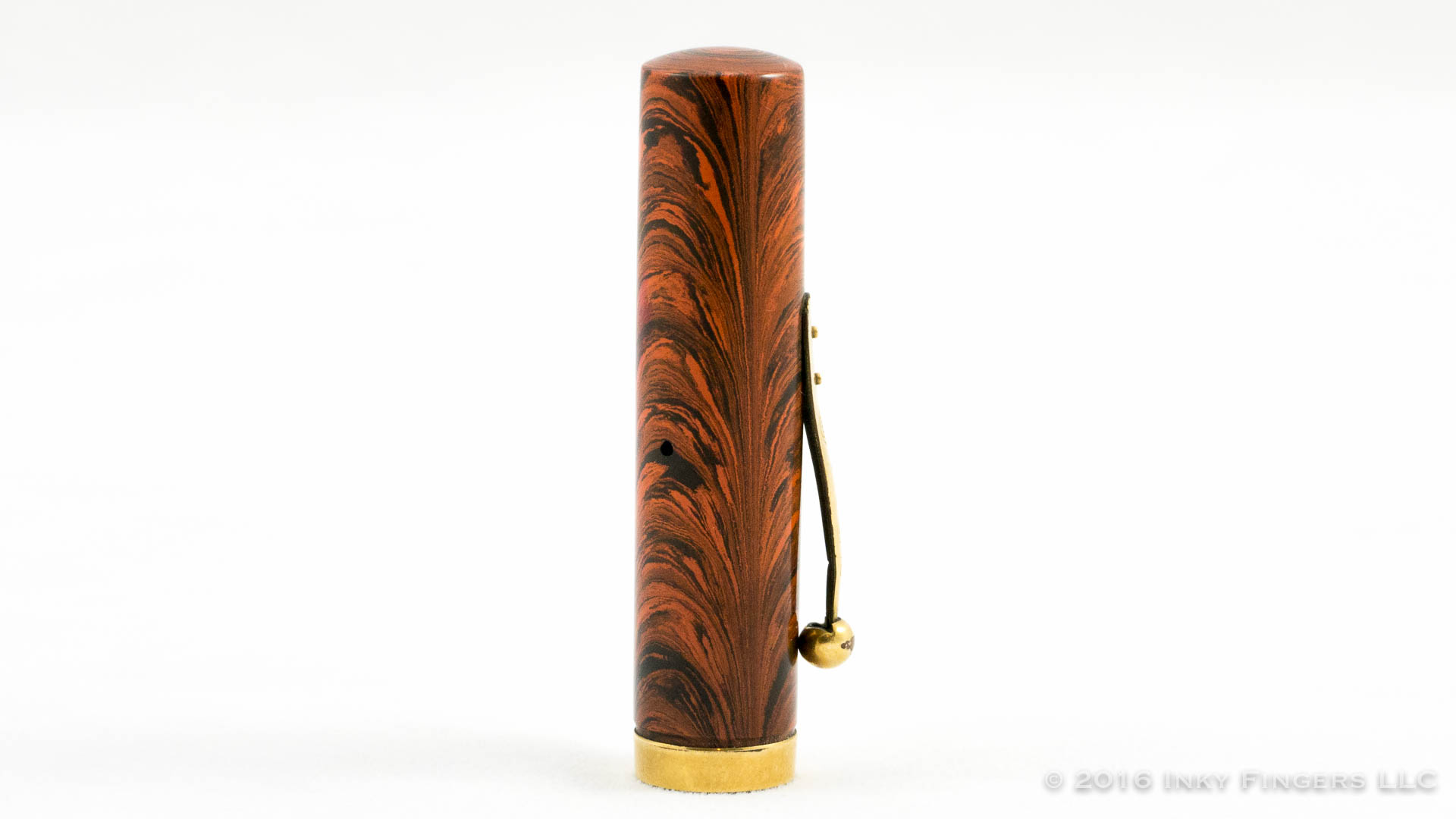 In the 1930s, pen manufacturers started moving away from ebonite as the main material of manufacture and on to highly colored and figured plastics like celluloid and casein. Waterman, however, held onto its ripple ebonite materials for a long time. (Once again proving the business adage that nothing kills innovation faster than success.)

I go into this history for two reasons: to give you a little background on the company and, more importantly, to help date the pen. There is not a lot of easily accessible information on the Waterman’s Ideal No. 56 out there. Most searches lead you to information about the Waterman 52 or 55 instead. Using the history above, we can figure that the 56 I received from my cousin-in-law was from some time between 1926 and the late 1930s. 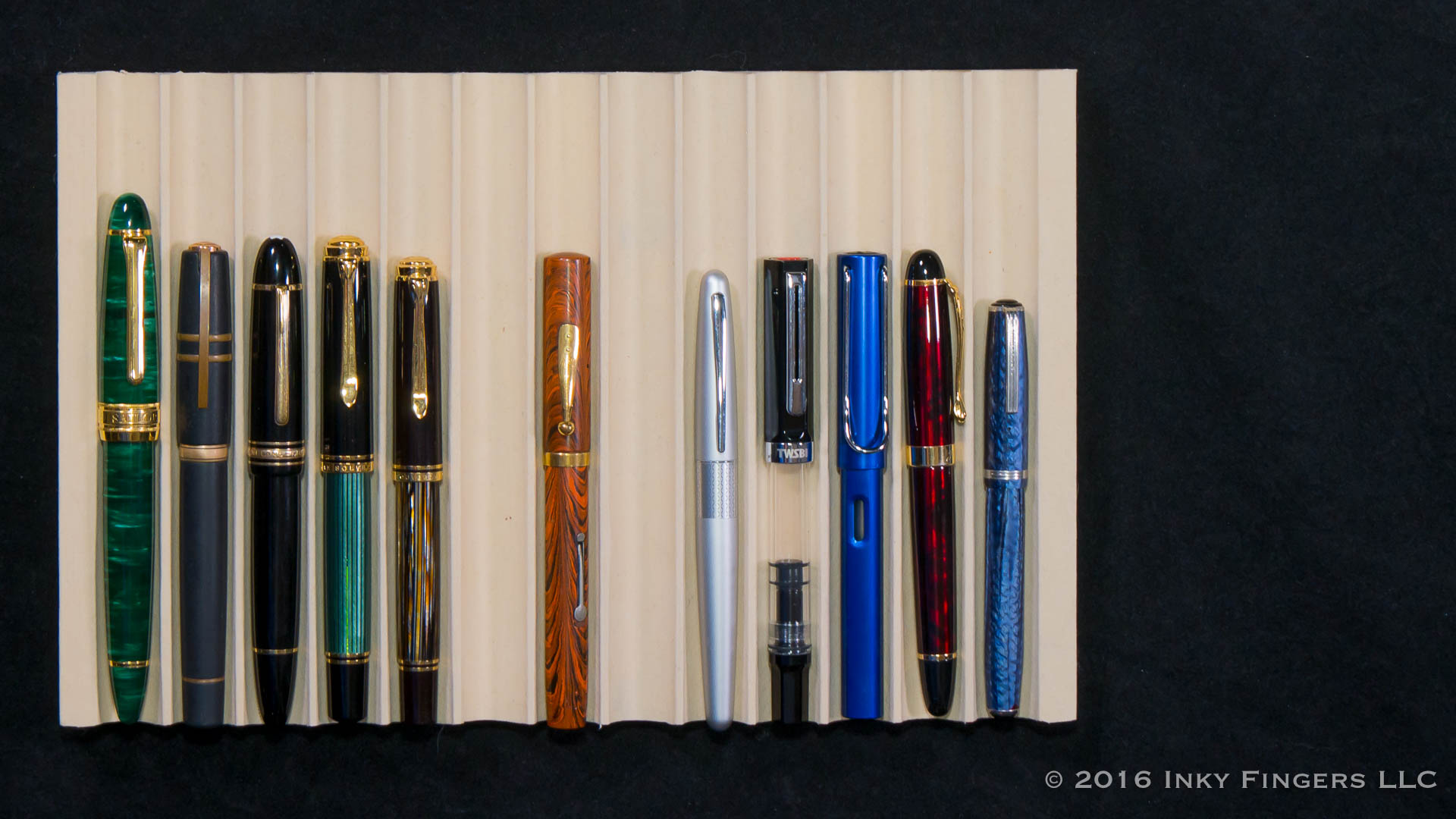 The Waterman 56 is one of the exceptions to the “vintage pens are small” rule. It’s a very large pen, clocking in at nearly the same length (although not quite the same diameter) as the Pelikan M1000. There are two Waterman pens with this same size body: the 55 is the more common pen, and comes with a slightly smaller #5 nib. The 56 is far less common than the 55, and uses a slightly larger #6 nib. (I should also note that Waterman’s nib numbering system of this time doesn’t necessarily correspond with the modern #5 or #6 nibs. They’re not necessarily interchangeable.) 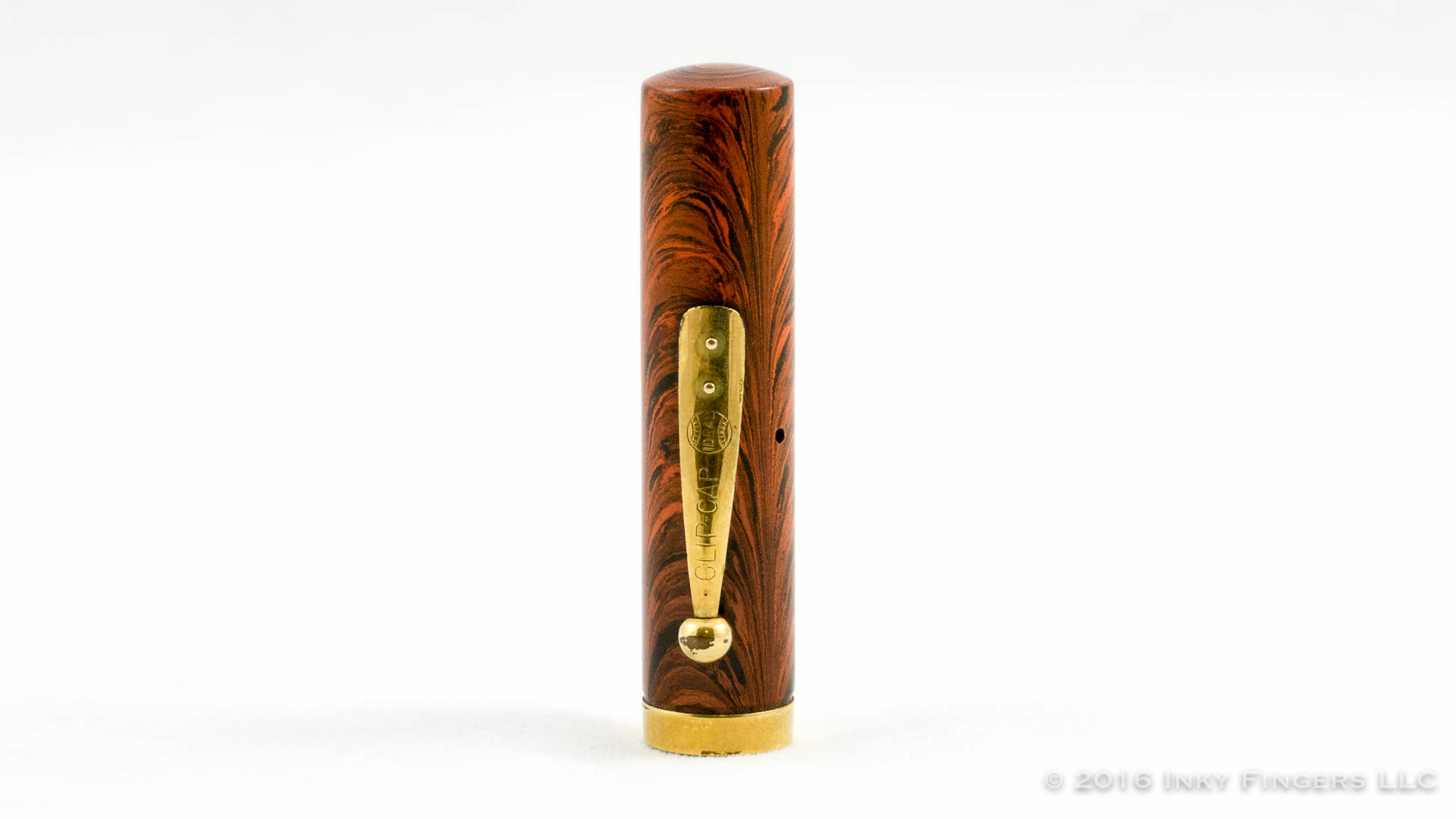 The cap is turned out of a single piece of ebonite. It’s a flat-topped design, but the “flat” end is slightly domed. The pen’s short, gold-filled clip is riveted onto the cap wall, and is stamped with the Waterman logo and the phrase “CLIP-CAP.” The cap has had three holes drilled into it to help (one would assume) keep any kind of vacuum from sucking out ink when uncapping the pen. I assumed that the holes would create enough air flow to cause the nib to dry out more quickly, but that doesn’t seem to be the case here. The pen is finished off by a medium thickness gold-filled cap band.

In vintage pens with gold-filled trim (gold fill is like gold plating, but significantly thicker than plating, and far more durable.) one of the attributes that helps to set value is the amount of “brassing” the hardware shows. Most of these metal accents used brass as a base metal for the gold filling, and when the gold coating wears off to show the underlying brass, that is called brassing. Brassing can be pretty common on vintage pens, especially on parts that are well-used or stick out from the body. And, obviously, the more of the original gold is in place on the pen, the more the pen will be worth. On this pen, there is a small bit of brassing on the outside of the clip ball, and an almost unnoticeable amount on the cap band. 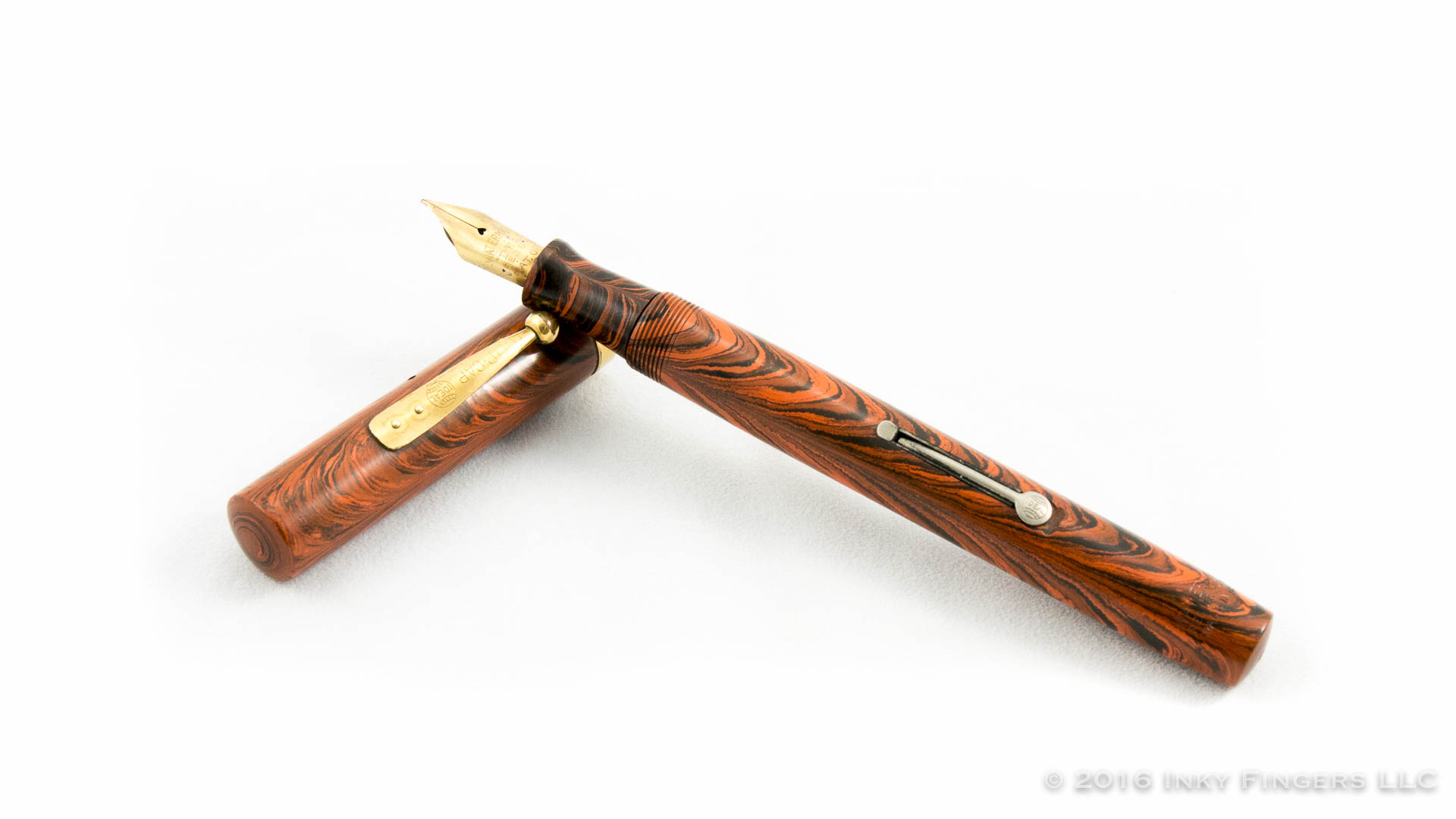 The pen’s barrel is almost cylindrical, but does taper down a bit toward another flat end with rounded corners. The Waterman 56 is a lever-filler, and the side of the barrel has a cutout into which the pen’s lever box is attached. The lever box on this Waterman 56 is nickel rather than gold-filled, which leads me to believe that the lever box on this pen was probably replaced at some point. (Either that, or that this pen is a franken-pen that was assembled from parts of different pens.) The lever box contains the Waterman Ideal logo on the end of the lever. 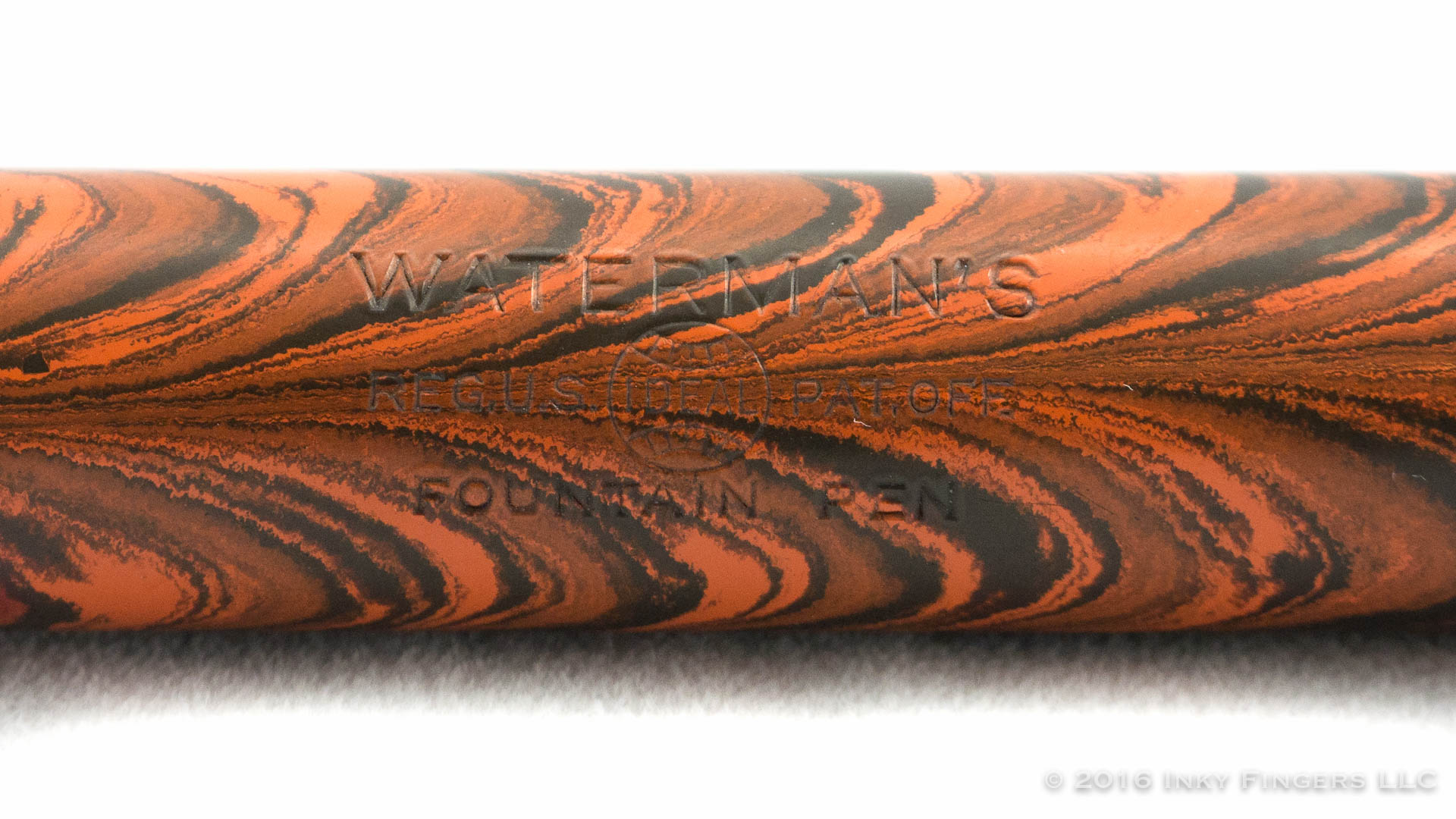 The pen’s barrel is imprinted in a few different locations. A pen’s imprint is another attribute which helps to determine a vintage pen’s value. The 56’s main imprint in on the middle of the barrel, and runs along the length. It reads “WATERMAN’S” on the first line. The second line of the imprint has the Ideal globe logo, which separates the phrases “REG US” and “PAT. OFF”. The final line contains the worlds “FOUNTAIN PEN” in small text. There is a second imprint on the bottom of the barrel, under the lever box, which runs around the barrel rather than along it. It reads “WATERMAN | REG US PAT. OFF | MADE IN U.S.A.”. The final imprint can be found on the bottom of the barrel and is simply the number “56,” indicating the pen’s model number. 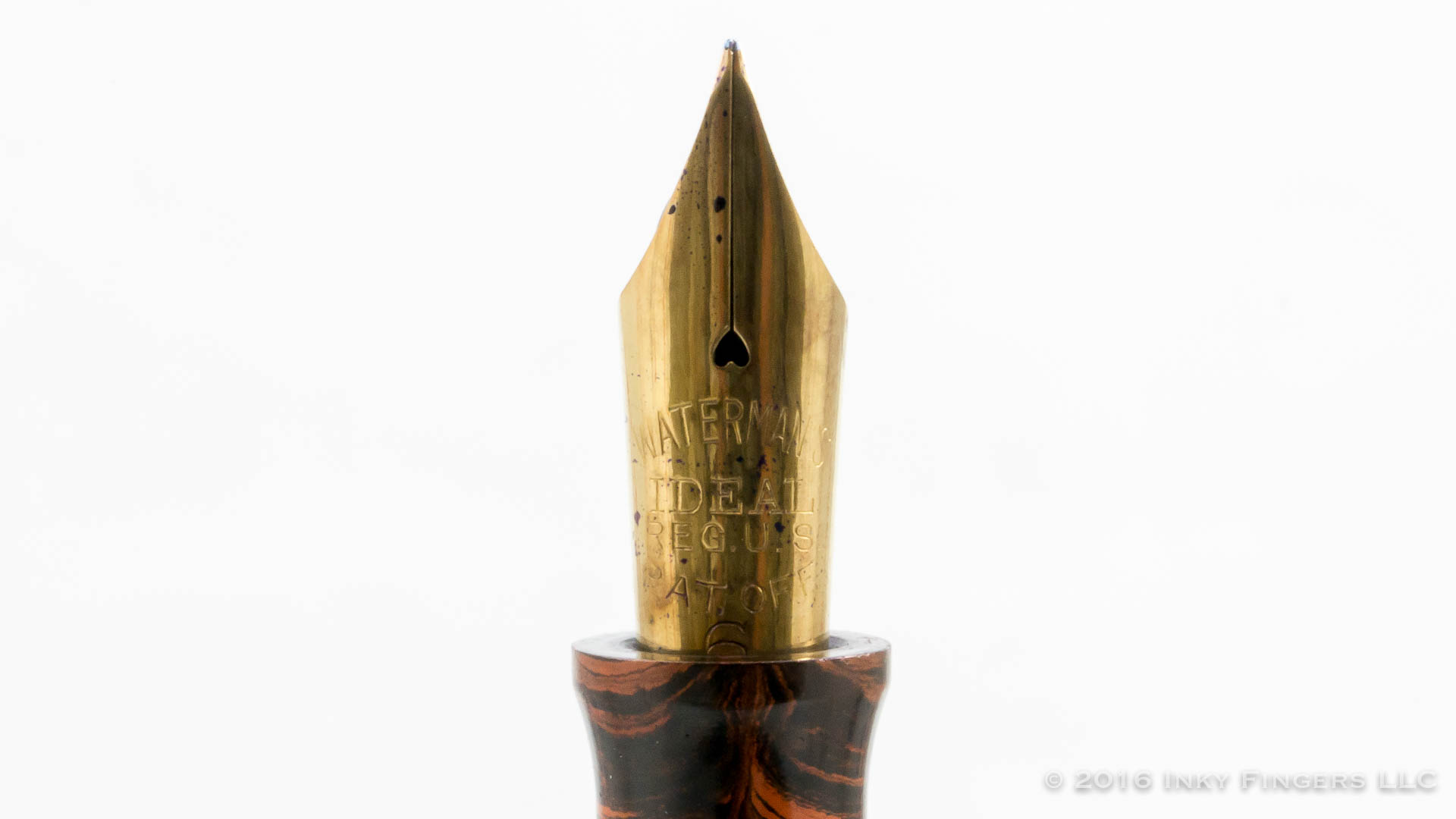 The pen’s cap unscrews from the barrel with just a touch less than one full turn. Under the cap lies a small conical section with a slight flare-out toward the nib, and a Waterman’s Ideal 6-sized nib with a heart-shaped breather hole. Waterman’s feeds from this era were made of the same material as the pen, and lacked any of the fins more common on modern pens. The section is comfortable, but is short enough that I find myself on the threads fairly frequently. Fortunately, the threads are quite shallow and blunted, so they aren’t sharp at all. 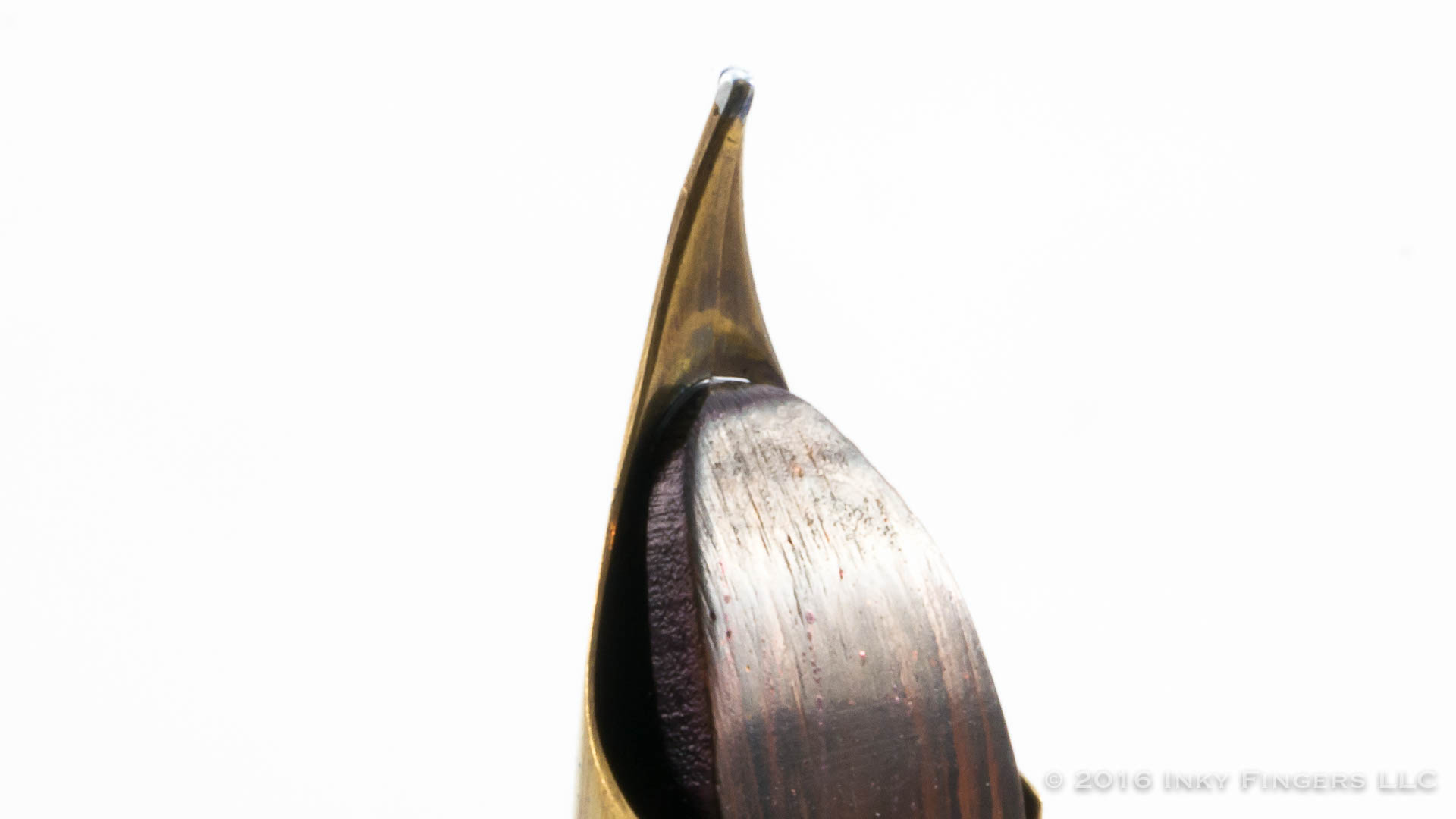 One of the things I found interesting about this nib is that it has a slight curvature from the body of the nib down to the point–something I have noticed on several of the Waterman nibs of this era. If I were to see this on a modern nib, I would assume that the nib had been dropped at some point. But as I have seen this several times on these vintage nibs, I wonder if this is one of those small characteristics that prevent modern “flexy” nibs from having the same feel as vintage nibs. 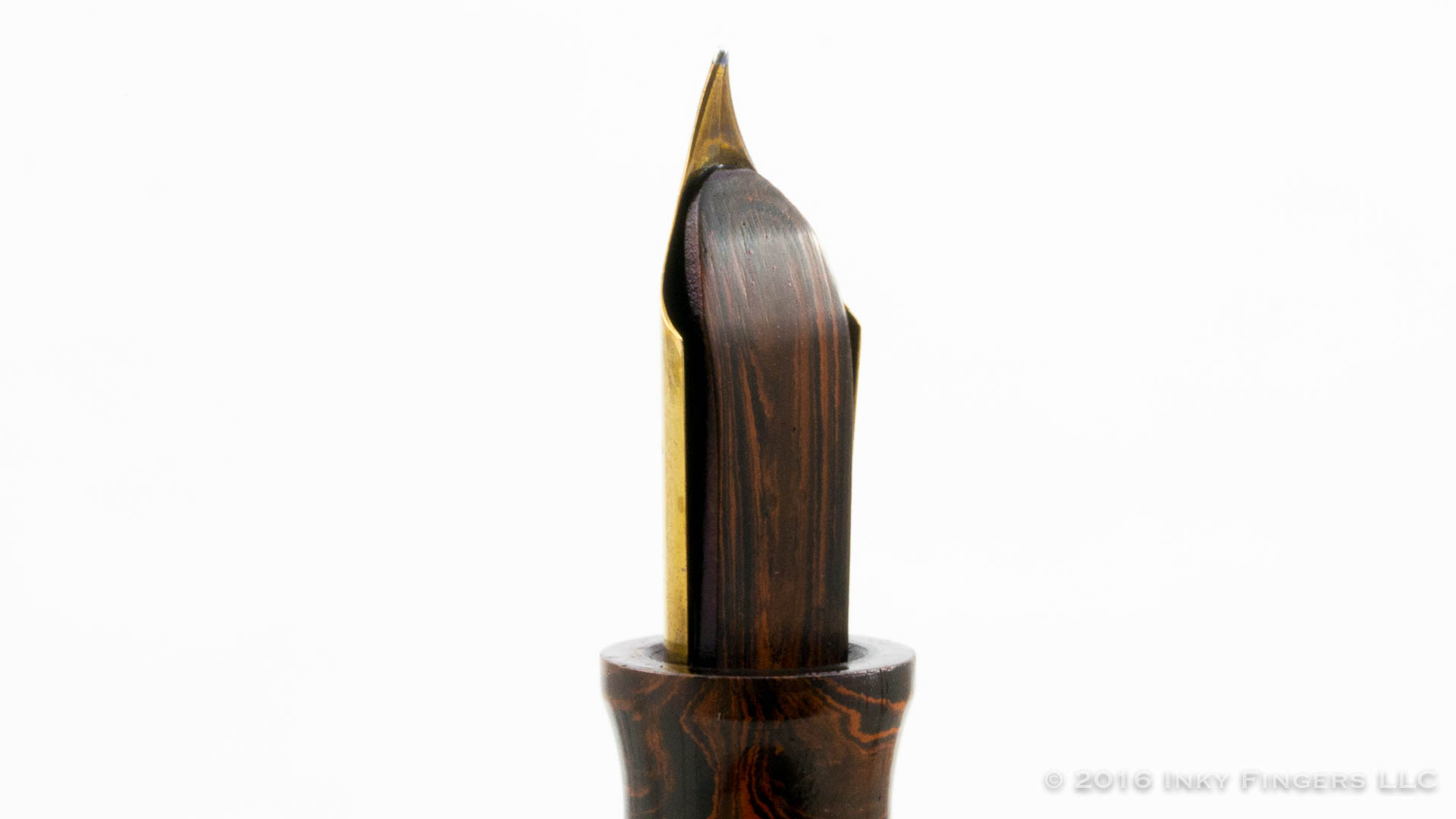 Then, of course, we come to the writing performance of the nib itself. With the exception of the nibs on their Ideal #7s, the Waterman nibs of this era generally don’t have markings on the nib to indicate the point size or nib flexibility…so the only way to figure it out is to try it. When I put this nib to paper I was blown away. With light pressure, this nib has a very fine, but very smooth, line. When applying some pressure, though, this turns from a bouncy extra-fine nib to a gusher of a semi-flex nib that maxes out at a wide broad. It’s got a great, responsive snap-back and it one of those vintage nibs that does a really great job of telling you when you’re pushing it too hard.

Waterman flex and semi-flex nibs on pens of this era are easily some of the best flexy nibs ever made. And the rather rare #6 nib on the 56 is a real treat to use. It’s coupled with a feed that is easily capable of keeping up with the generous ink flow. It’s comfortable in the hand, even for someone who is used to larger modern pens. It’s a gem of a vintage pen. Obviously, I can’t give you price for this pen, because it was found in a drawer. A quick bit of research shows black rubber versions of the 56 going for $350-$400. You could probably expect a red ripple version to go for more (black models are usually the least expensive when you’re dealing with vintage pens), but the price might get dinged a bit for the nickel lever box on this model. I did spend about $2 on a new sac and used a bit of shellac to seal the pen back up. Everything else was just a bit of scrubbing. The result is one of the most enjoyable vintage pens I’ve ever used. It’s going to be really hard to send this back to my cousin-in-law.