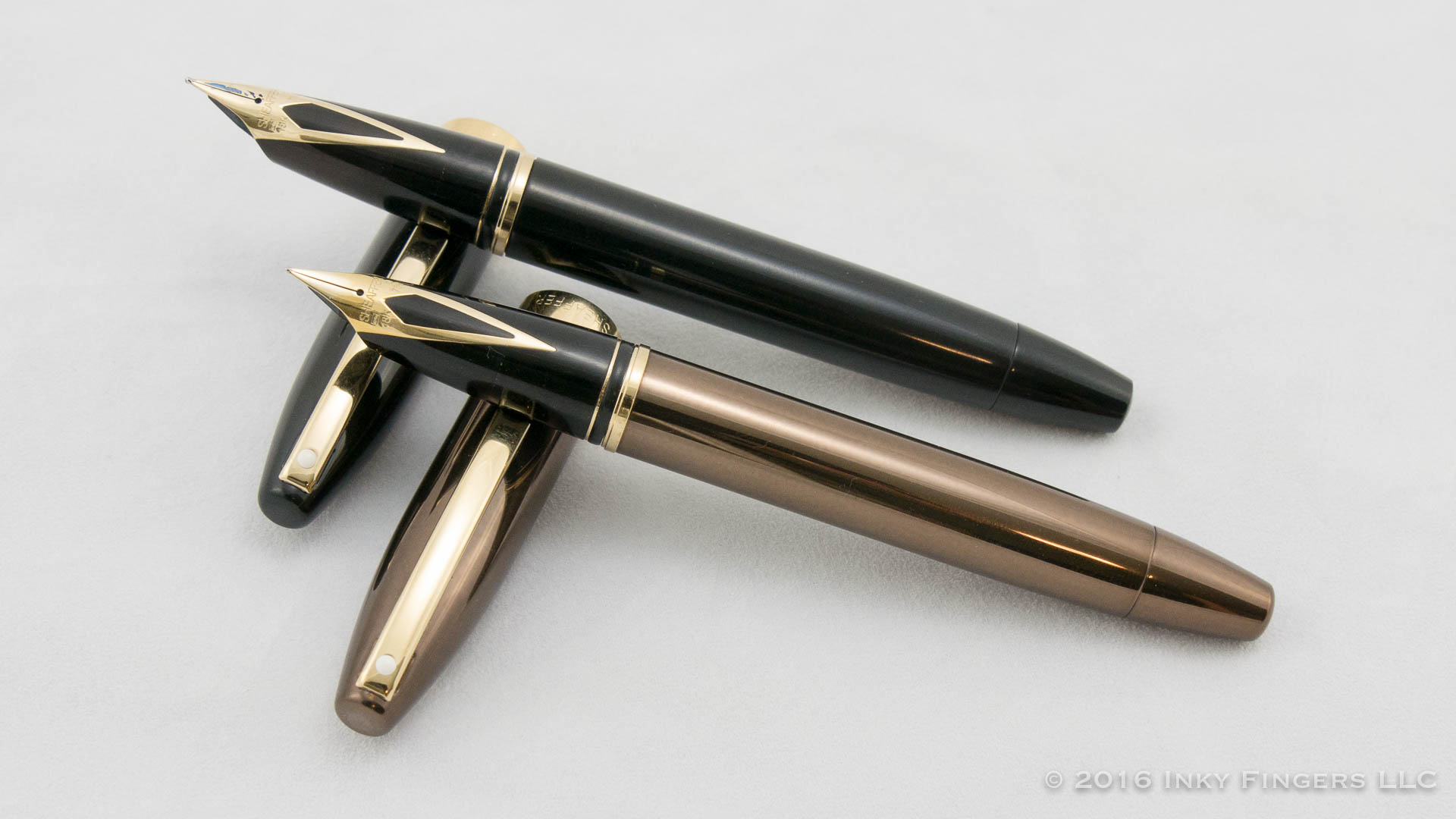 Sheaffer was one of the earliest and most successful pen companies in the world. Despite this, or perhaps because of it, they proved the adage that nothing stifles innovation faster than success. As the pen market started to seriously change in the 1960s and 1970s, Sheaffer struggled to adapt to the introduction of the ballpoint pen and the new way consumers were using pens. By the 90s, things were bleak indeed for the once-venerable manufacturer; so much so that they were purchased by the French conglomerate Bic in 1997. In 2003, Bic announced that it would be shutting down the company’s historic Ft. Madison, Iowa factory–which it did in dribs and drabs until the lights were turned off for good in 2008. As the factory was shutting down, some enterprising collectors snatched up the remaining stock of fountain pens, with the hopes of offering them for sale at a later date as New Old Stock (NOS). 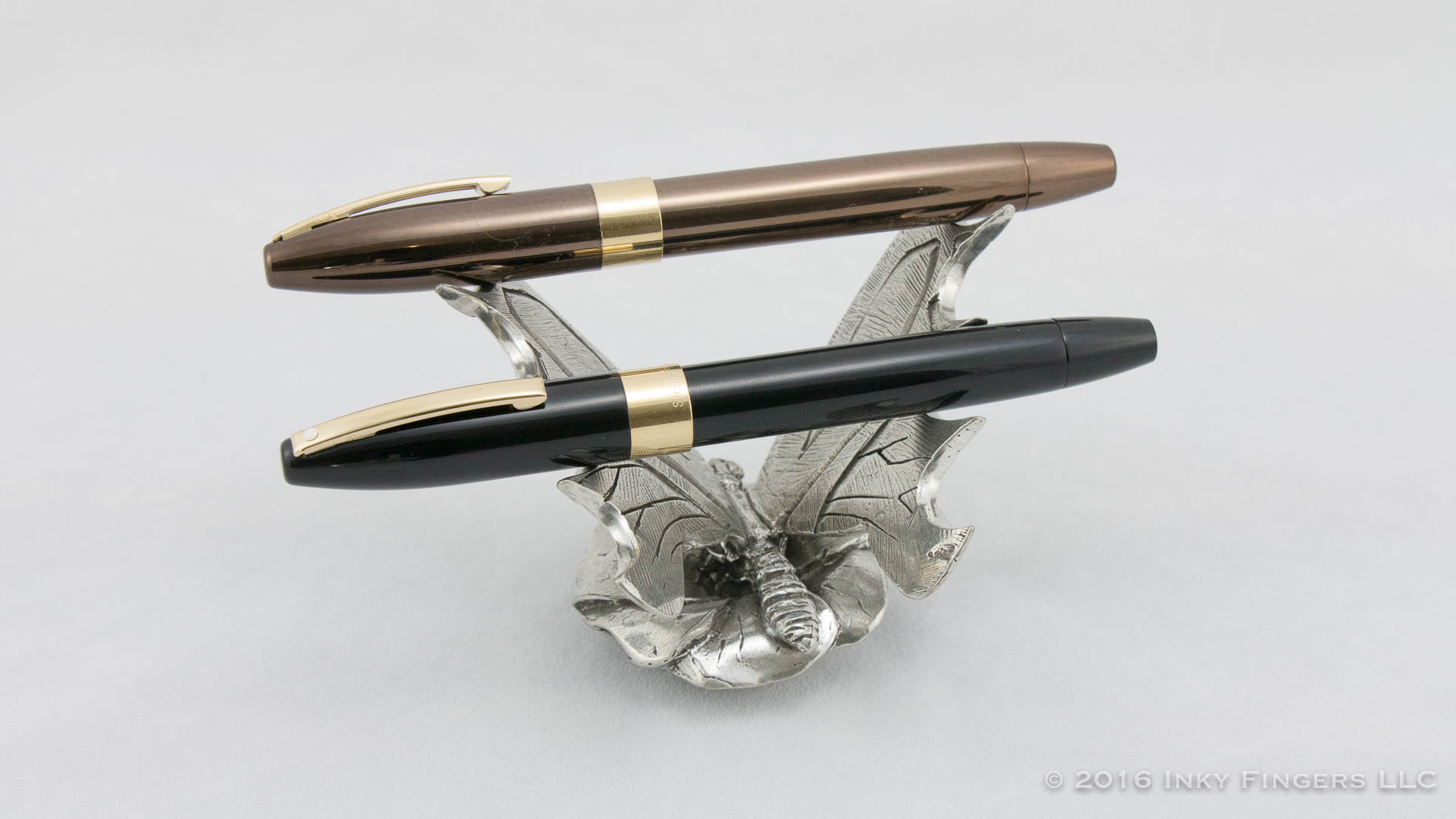 The Sheaffer Legacy II was one of those pens manufactured at the factory during the Bic years. Based on the classic and much-loved Sheaffer PFM, the Legacy series was an attempt to revive some of Sheaffer’s heyday in a modern pen. The Legacy I was released in the 1990s, and is a slightly closer replica of the PFM. The PFM was made of injection-molded plastics, while the Legacy was made from metal. But the Legacy I had squared-off ends and raised studs on the section/barrel to keep the cap in place. In the early 2000s, the design was further improved and refined to help improve quality control under modern manufacturing techniques. The squared-off ends were rounded to help reduce manufacturing flaws from finishing a pen with square edges, and the cap studs were replaced with a compression ring and improved inner cap for a tighter quality seal when the pen was capped. Both pens used Sheaffer’s well-known Touchdown filler (more on that in a bit.) There was also a less-expensive model in the Legacy line, the Legacy Heritage, which replaced the Touchdown filler with a cheaper-to-produce screw-type converter/cartridge system.

During this period of the late 1990s and early 2000s, the Legacy really was the flagship line for Sheaffer, and that place at the top of Sheaffer’s line shows in the production quality. Unlike a lot of their less-expensive pens, the Legacy line was built with a lot of care and attention to detail.

The Legacy II, like the Legacy I, is built from a brass core, making this a hefty pen. While several finishes were available, the two models I had for review were a black lacquer with 23k gold filled hardware and a model called “copper,” which is a really unique brown metallic finish that almost reminds me of ruthenium (if ruthenium were a rich brown color instead of grey-black). 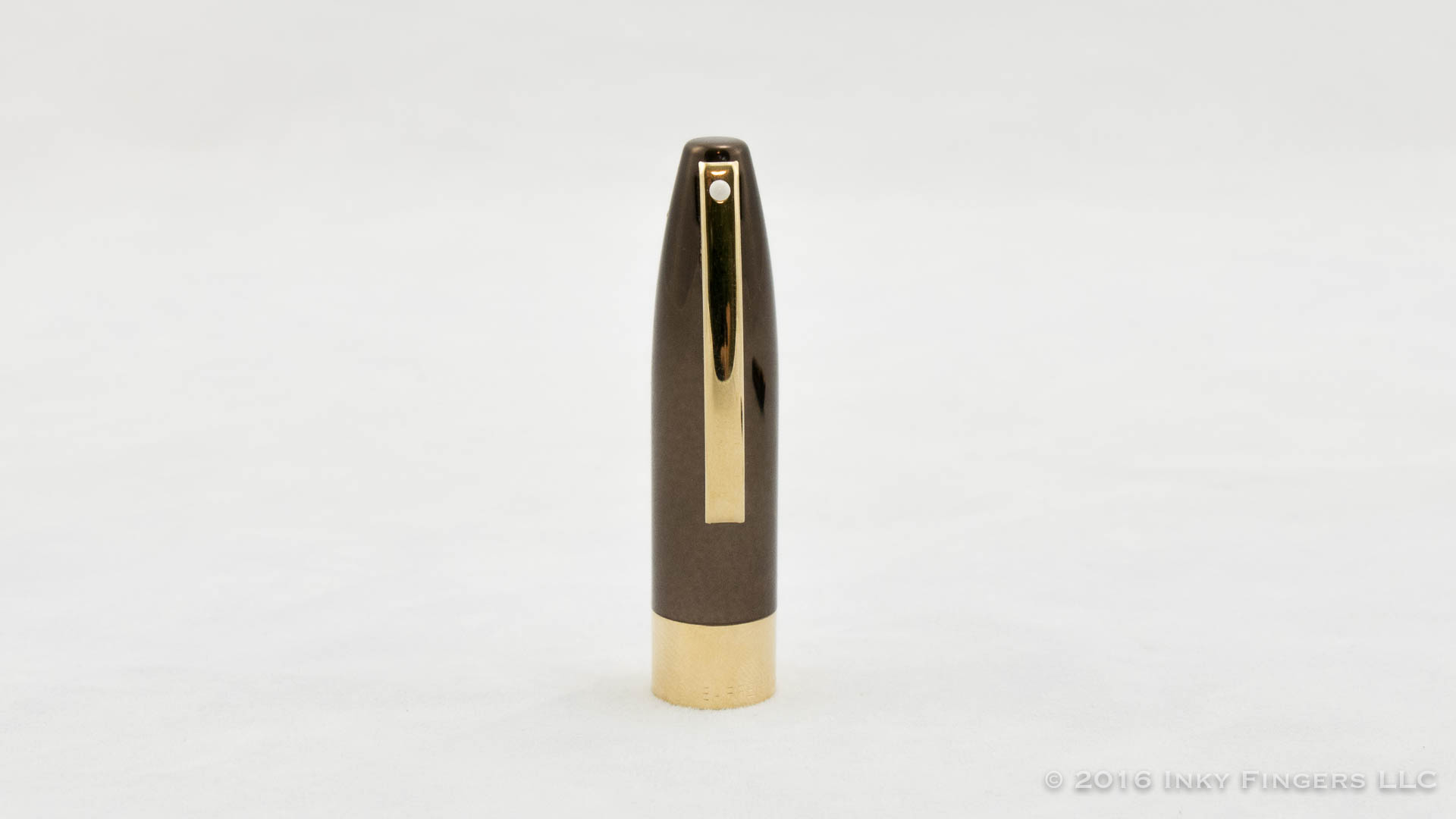 The pen has a semi-hinged clip with a very flat, 1950’s mid-century modern style profile. (This is a pen and clip you could easily see in the pockets of the gents on Mad Men.) The cap is accented by a thick gold-filled band on which are the words “SHEAFFER” and “USA.” The rest of the barrel tapers a bit toward the end and strikes a streamlined appearance. Toward the end of the barrel, there is a line which demarks the knob for the pen’s touchdown filler. 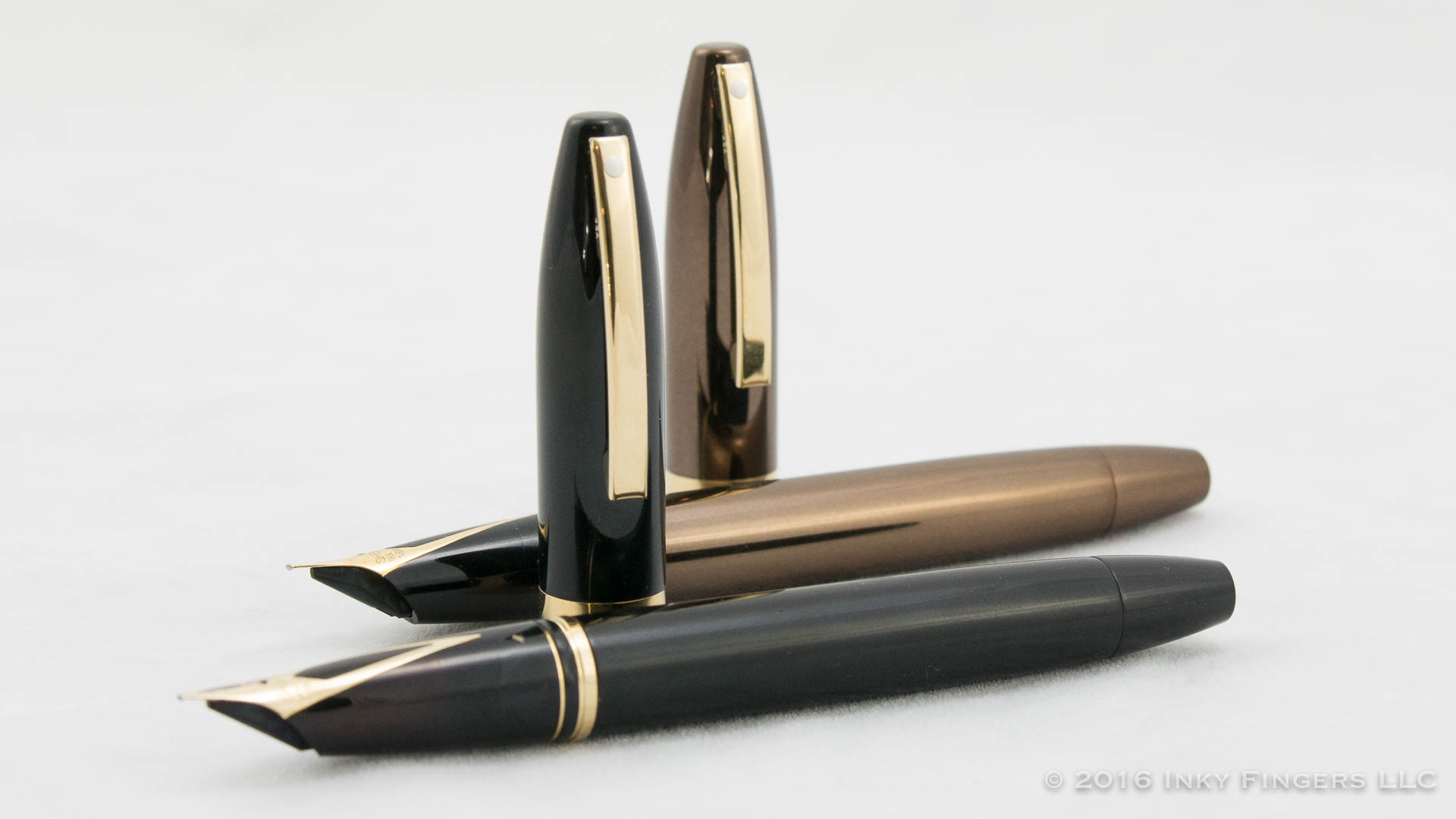 Under the pop-off cap lies a swooping black acrylic section into which has been set Sheaffer’s iconic diamond-shaped inlaid nib. The nib is stamped with Sheaffer’s name and all the necessary hallmarks to indicate the 18k gold makeup. On the bottom side of the section is a small gold letter indicating the nib’s width, but it appears that it will probably wear off pretty quickly with use. (The M for medium on my nib is already starting to disappear.) 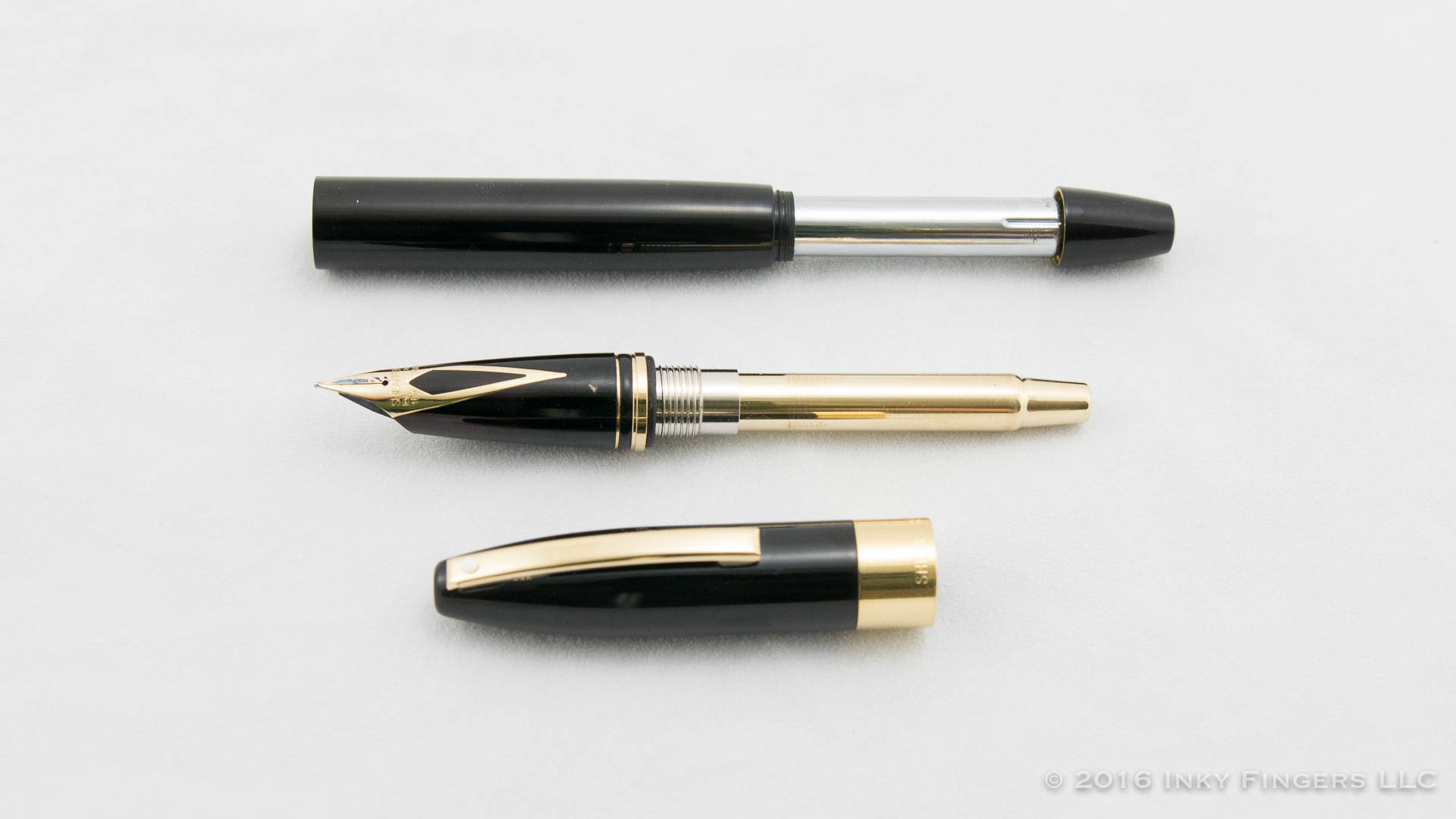 The Legacy I and Legacy II both utilized the filling system that became one of Sheaffer’s trademarks, especially on their higher end pens: the Touchdown filler. A cross between a pneumatic-filled and a modern vacuum-filled pen, the Touchdown system works by unscrewing the knob at the end of the barrel and pulling it straight out to reveal a steel plunger tube onto which is attached a series of o-rings. On the up stroke, the action pulls air into the barrel. On the downstroke, it compresses the air in the barrel which, in turn, compresses a latex sac. Then, when the plunger is almost fully depressed, a channel in the plunger tube wall breaks the interior seal and releases the built-up pressure. This allows the sac to re-expand and suck ink up through the nib.

On the original touchdown fillers, the latex sac and barrel were attached, making for a very air-tight chamber that would allow the user to get a full fill with only one depression of the plunger. The downside of this method was that it required the user to use bottled ink, and servicing the pen in the event of a breakdown would be difficult.

Understanding the need to cater to a modern market, a large portion of which had no access to pen repair people (or even bottled ink) Sheaffer made a couple of minor changes to the system. First, the section and barrel were simply screwed together, like any other cartridge/converter pen, and an o-ring was added to the section tenon to help create that airtight chamber. Secondly, Sheaffer turned the pen into a cartridge/converter pen but provided a special Touchdown converter. This metal tube could be plugged into the pen like any regular converter. Inside the tube was a silicone sac, and the top had a hole in the top through which the built-up pressure could compress the sac. This hybrid Touchdown system could be removed for those users who couldn’t be bothered to fill from an inkwell, or preferred the convenience of cartridges. It also reduced the potential need for servicing and made for easier cleaning. The only real downside to this change is that unlike the original Touchdown filler, which could get a full fill with a single depression of the plunger, the updated Touchdown filler wasn’t quite as airtight, and required two strokes of the plunger to achieve a full fill: a small price to paid for improved convertibility. 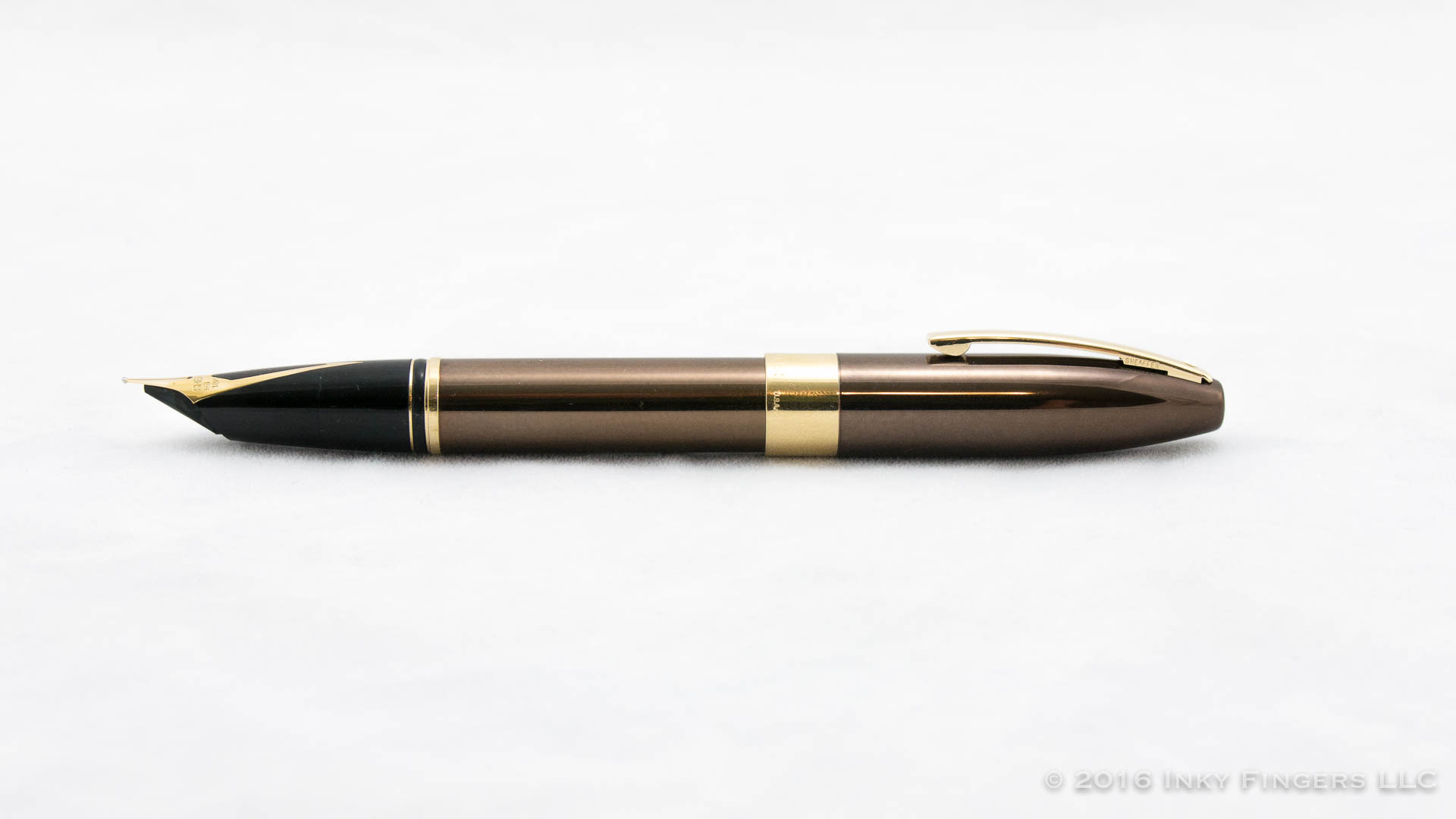 My own first impression of the Legacy II was lackluster. I love mid-century modern design, but this pen felt rather bland, especially on the black lacquer version. That impression only lasted as long as it took me to uncap the pen and put in in my hand, though. From the second I picked up the pen, it was clear that this was not just a cheap replica of a PFM, but was clearly an attempt to help Sheaffer reclaim its former glory as a maker of premier writing instruments.

The body of the pen is exquisitly balanced, simply nestling itself down into the web of my hand. The weight of a metal-bodied pen disappears, and the pen is equally comfortable for my posted or unposted. When posted, the cap slides on deeply and securely, taking advantage of the white plastic inner cap to keep from damaging the finish.

The section is also quite comfortable. Like the admittedly more popular Parker 51, There’s no significant step-down between the barrel and the section, and the section’s swooping design means that there’s a grip for everybody on there without holding onto any uncomfortable threads or step-downs. Unlike the Parker 51, the beautiful inlaid nib stands out against the black of the section (which I believe is made from acrylic) and helps to provide a visual orientation for people like me who tend to roll their pens. 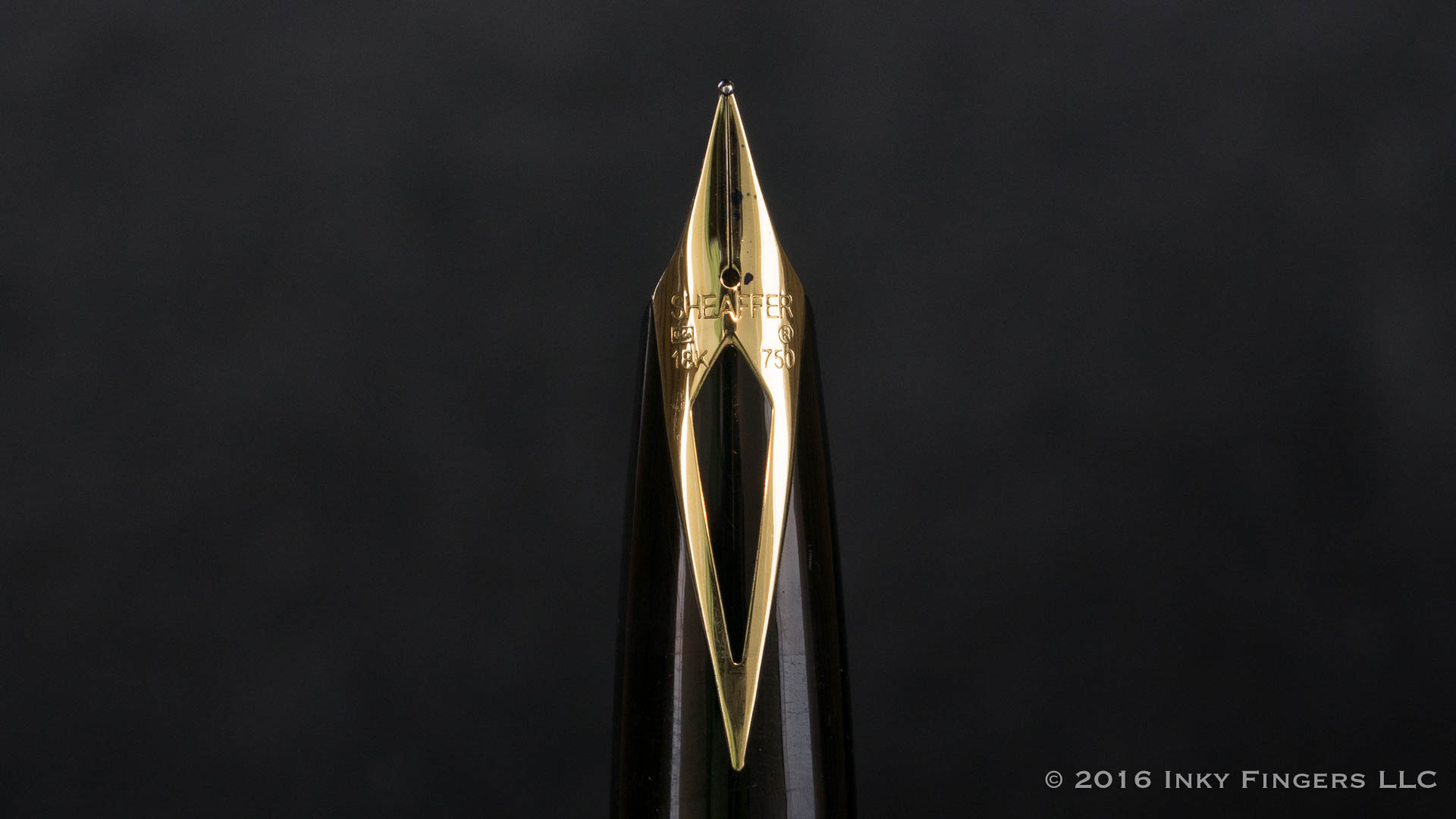 Without question, though, the real beauty of this pen lies in the amazing 18k gold nib. Sheaffer may have struggled to find their place in the modern world of writing instruments, but so long as their pens were made here in the US, one thing they never seemed to struggle with were their nibs. And the nibs on these Legacy IIs showed just how good Sheaffer’s nibsters were. The long, slender tines of the diamond-shaped nib left it without the “shoulders” of more traditionally-shaped nibs, and as a result, the nib is soft and wonderfully bouncy. The feed, which appears to be a two-part ebonite number, is mostly enclosed within the section and this, coupled with the nib’s perfect adjustment, keeps this pen juicy and perfectly consistent for page after page of writing. 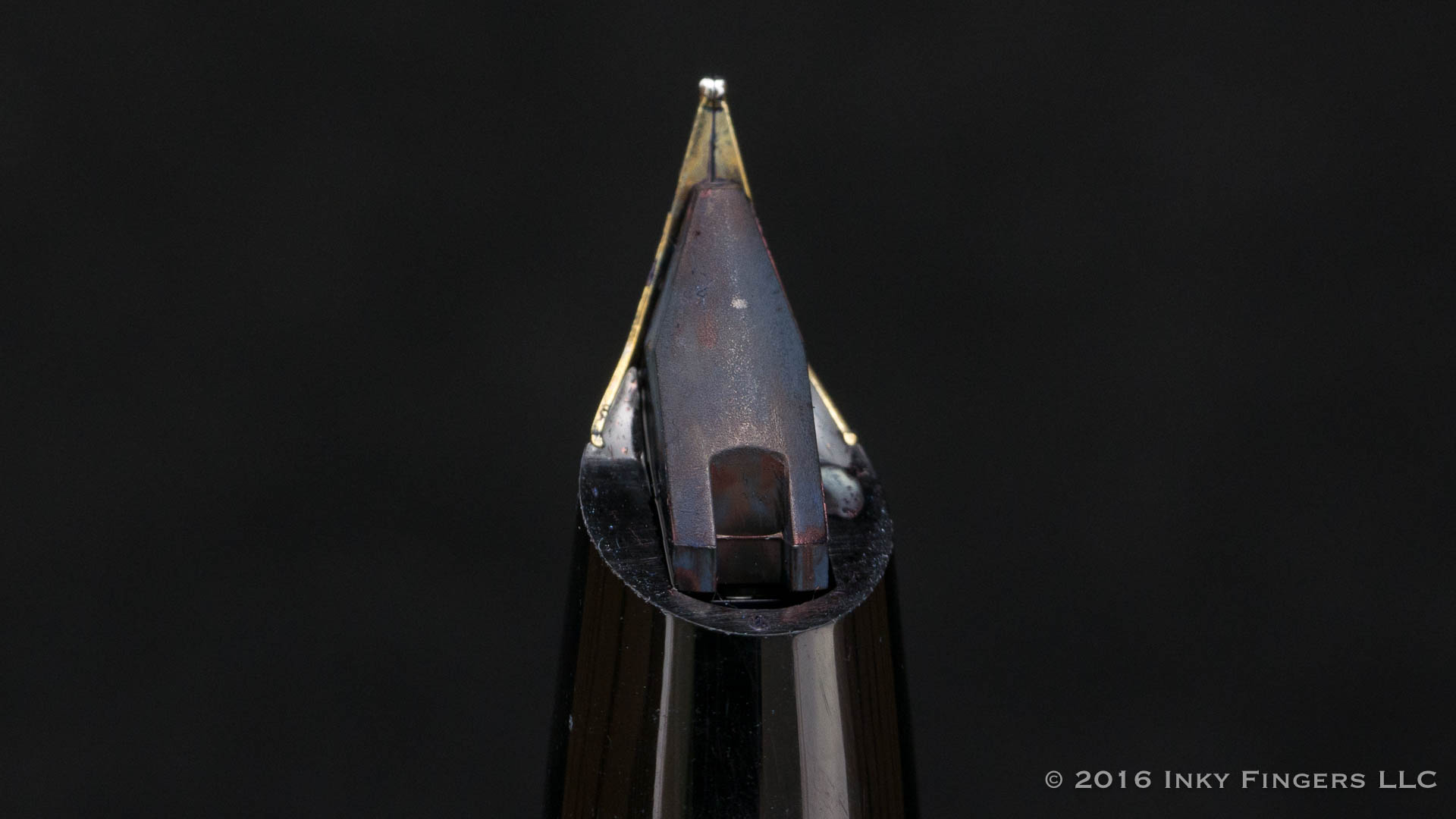 Speaking of perfect nib adjustment, I was simply floored by how smooth this nib is. I would put it at about a 1 or 1.5 on my feedback scale (where 1 is butter on hot glass and 10 is a roofing nail on concrete.) It’s a very forgiving grind as well, easily adjusting to my occasionally heavy hand and tendency to roll the pen to the left. There was no sweet spot at all, no skipping, no hard starting, and no ink starvation despite very long writing sessions. The combination of nib tip’s polish, the generous ink flow, and the perfectly balanced weight come together to make a really wonderful writing experience. 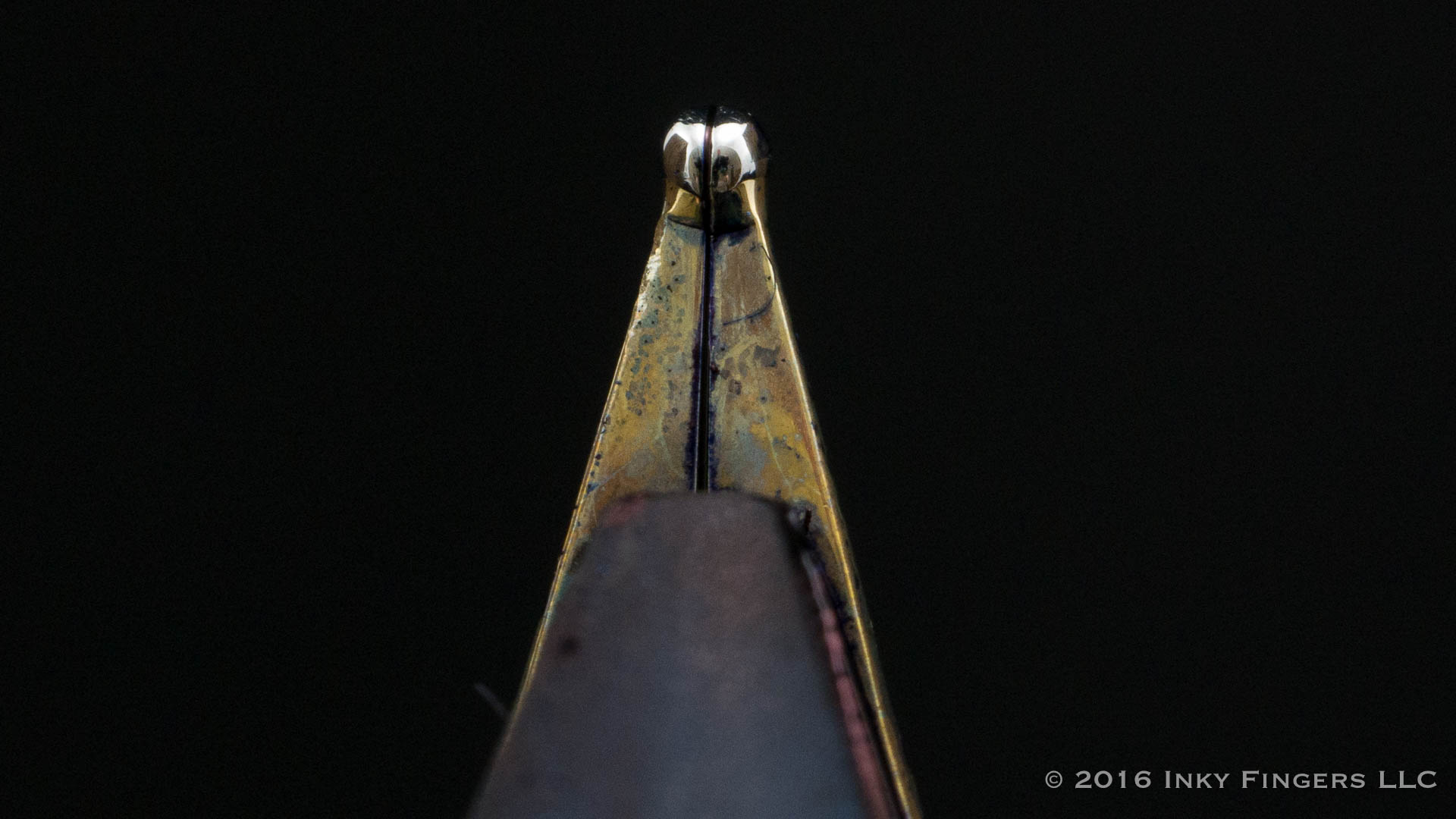 The combination of nib tip’s polish, the generous ink flow, and the perfectly balanced weight come together to make a really wonderful writing experience. This odd mid-century throwback made of metal that didn’t really speak to me all of a sudden found a place in the top of my “everyday writers” pens: robust, solid construction, a design that won’t draw a ton of undue attention, and a perfectly consistent writer–what more could you ask for?

Clearly, with the Sheaffer Legacy II being out of production for over a decade now, finding these pens is not always as easy as one might hope, nor are prices always consistent across the board. You’d generally do best to seek out a retailer who specializes in Sheaffer pens. One retailer I know has them (because they provided them for this review) is Vanness Pens, who received several hundred of these NOS Sheaffer Legacy IIs from one of their customers who had snatched them up when the US factory closed. Vanness Pens currently has them priced at between $175 (for the black, copper, or palladium finishes) and $275 (for the sterling silver finish).

I would happily pay $175-$275 for this pen. In fact, I am planning on doing just that. Since I have to give away the black lacquer Legacy II to my viewers, I am planning to buy another one for myself. I simply like this pen far too much not to have more in my collection or give them as gifts to the fountain pen lovers in my family. They’re just that good.

The pens for this review were provided by Vanness Pens. One pen will be kept, the other will be given away to Pen Habit viewers. No additional compensation has been provided. All opinions expressed in this review are my own.