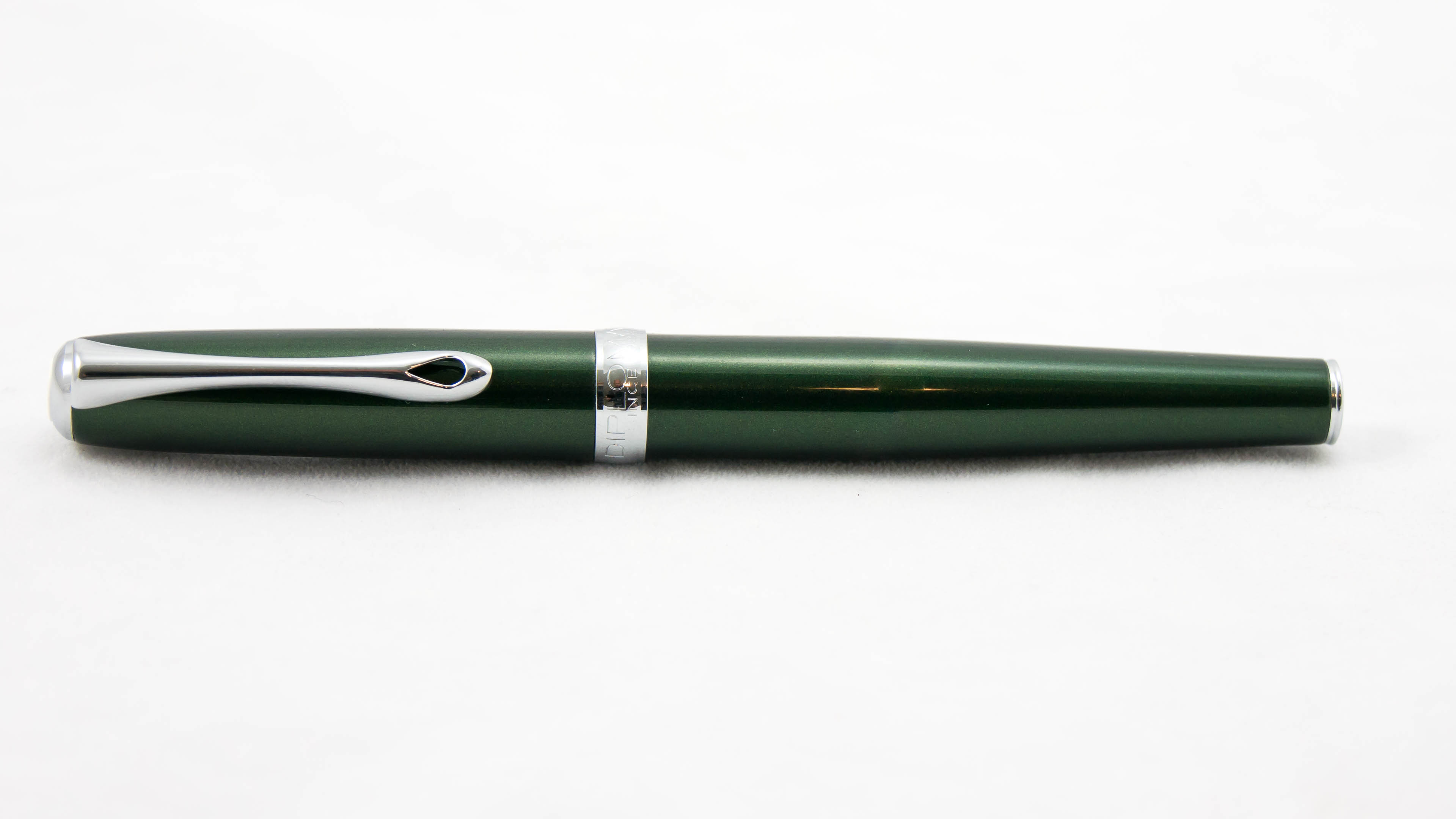 I was first introduced to the Diplomat brand of fountain pens toward the end of my third season when I received their zeppelin-shaped Aero pen to review. I liked it a lot—so much so that I ended up buying one to replace the one I had to give away. The Aero had one of the smoothest steel nibs I had ever used, and it put Diplomat on my radar for the first time. I ran into Points of Distinction, the US distributor for Diplomat, at the DC Show this August, and they allowed me to pick another pen of my choice for review and giveaway. Drawn to green pens as I am, I decided to try the http://penhabit.com/younger-men-marrying-older-women/. This time, I decided I wanted to try one of Diplomat’s gold nibs to see if I liked it as much as I liked the steel nib. 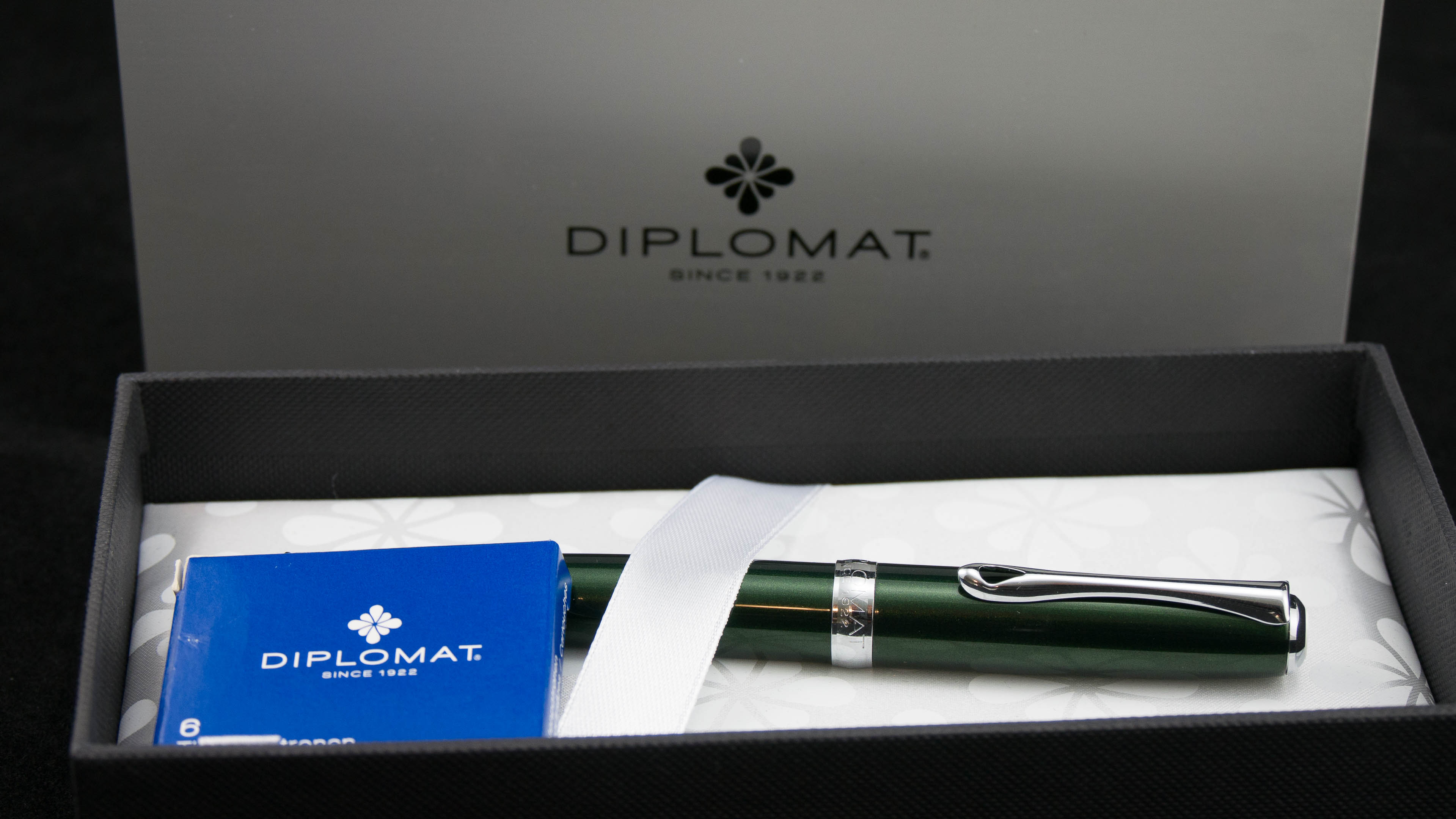 Where the Aero was showy and contemporary-looking, the http://penhabit.com/online-dating-unrealistic-expectations/ leans the opposite direction: it is a more conservative, classic profile. That traditional look is tempered somewhat by the rich forest green color of the lacquer on the cap and the barrel—a green with hints of olive and dusted throughout with gold metallic shimmer. The pen comes with either gold-plated or chrome hardware. I personally think that green and gold belong together, but I opted for the chrome version for the giveaway pen since I know many people much prefer silver-colored hardware. The eye-catching lacquer is laid over a brass base, giving the pen a bit of heft without being too heavy. 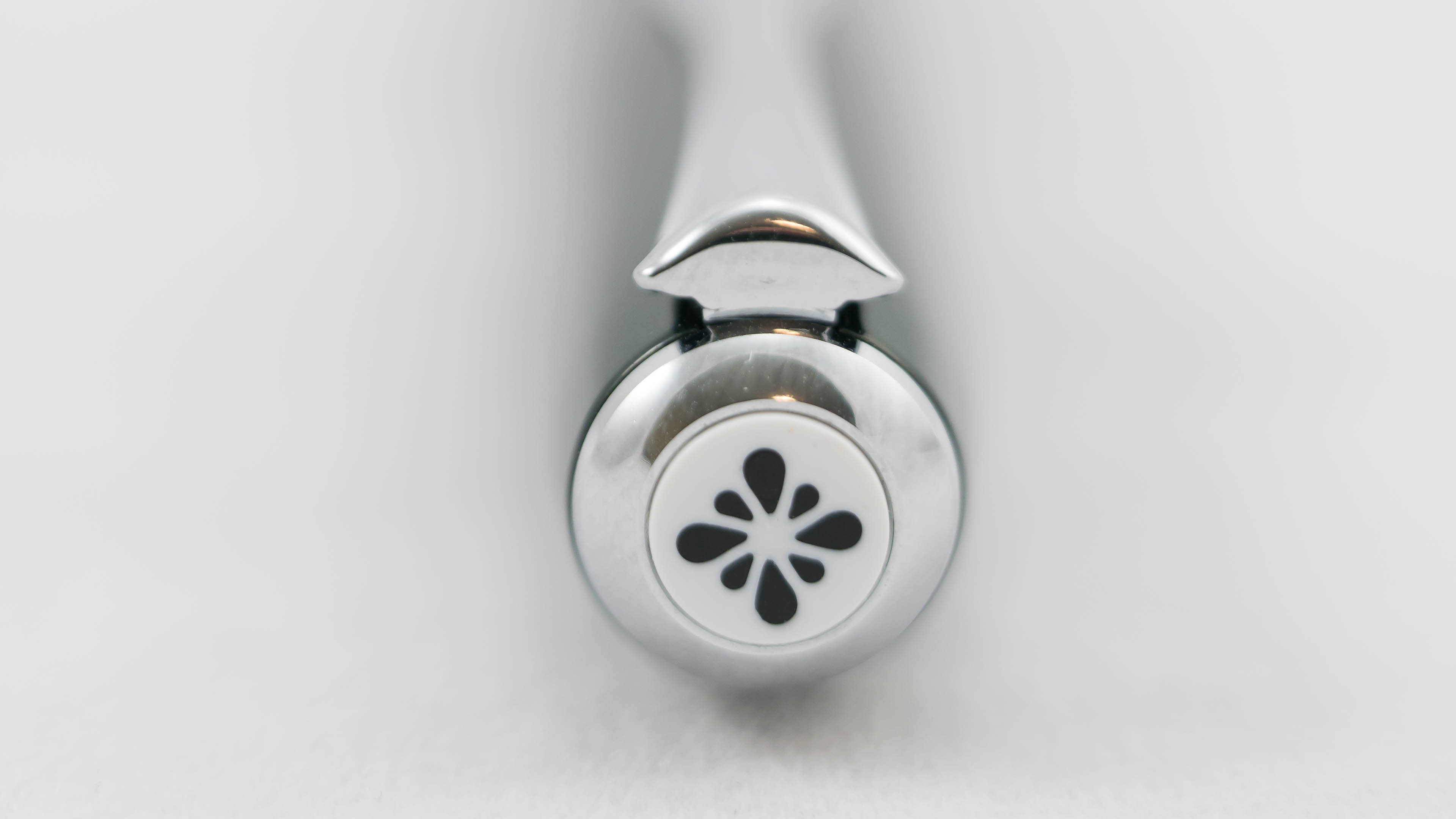 The cap is topped with a silver finial into which is inset a white plastic “coin” showing the Diplomat logo. The clip has a swooping, slender hourglass shape with a small teardrop cutout in the lower lobe. The clip itself is solid but springy. The cap then terminates in a rounded cap band onto which is engraved “DIPLOMAT Since 1922” and “Made in Germany.” The barrel of the pen tapers to a flat end with a silver medallion finial to terminate the look. 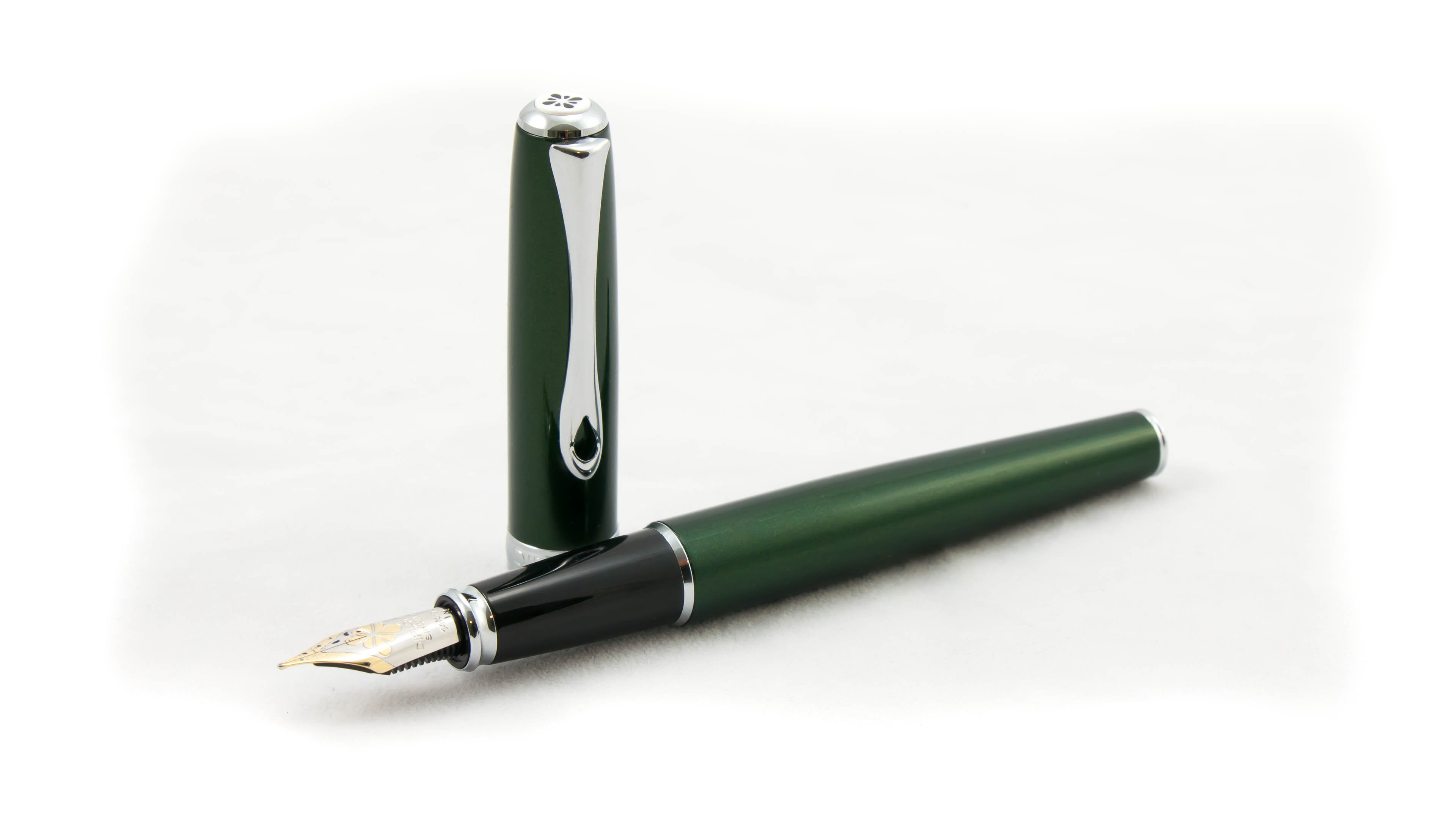 The Excellence A uses a snap-on cap, which snaps into place quite securely. Inside the cap there is a white plastic inner cap to keep the pen wet when not in use. It works quite well: I left this pen sitting for nearly three weeks unused, and it started right up with no problems. The inner cap also helps protect the finish of the barrel if you like to post your pens.

Under the cap is a tapered metal section coated in black lacquer and accented with a concave silver band. The lacquer on the grip is glossy, but nevertheless had an almost rubbery quality that kept it from becoming slippery during some of my longer writing sessions. 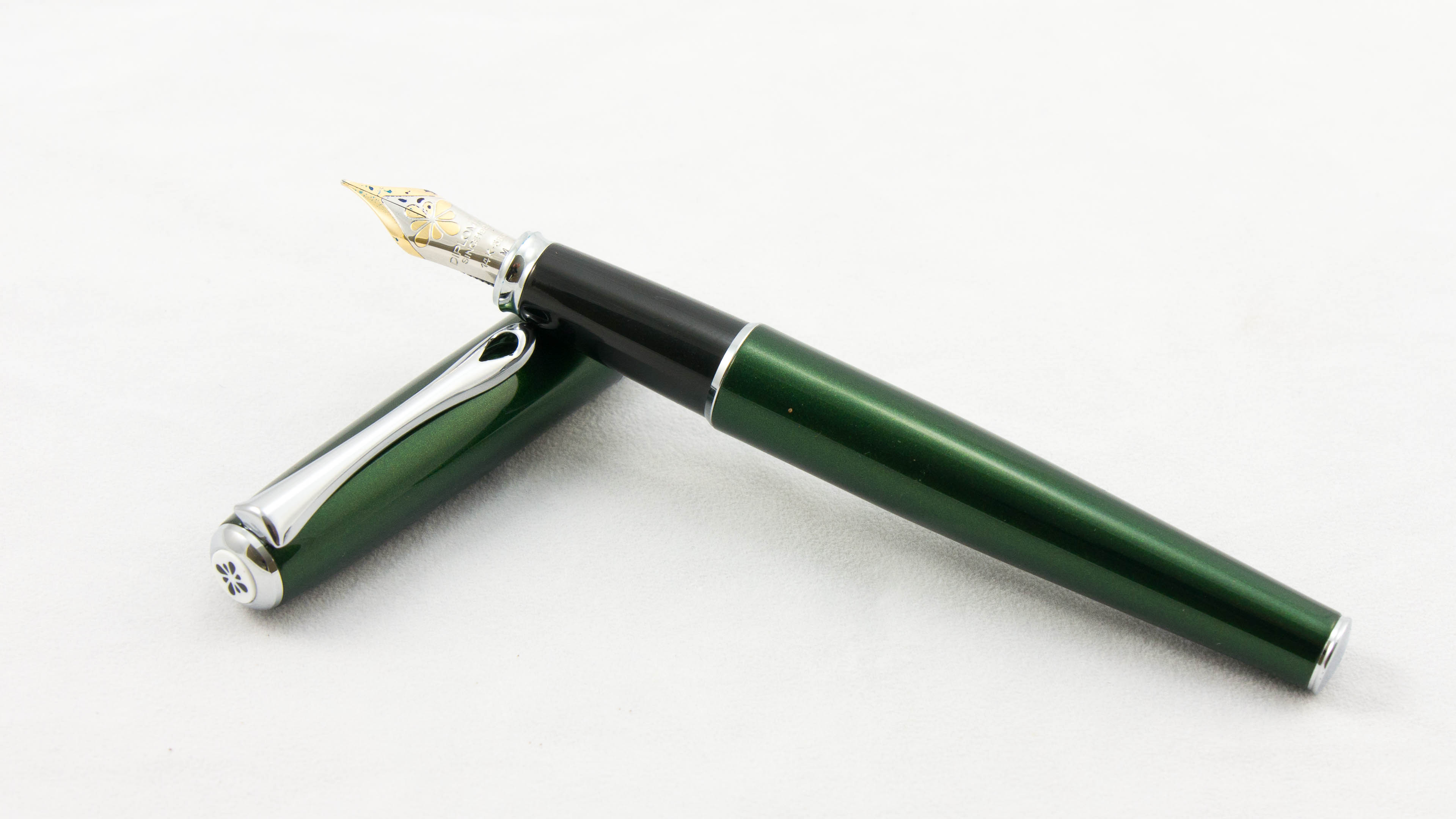 The Excellence A evergreen is not a small pen. It’s on par with pens like the Pelikan M800. Additionally, being made of a metal body, it is heavier than many pens of this size. Despite its extra weight, however, the Excellence A doesn’t really feel that heavy. It’s wonderfully balanced in my hand, and just sort of nestles itself into my grip without feeling weighed down. When posted, the pen does seem to cross the weight threshhold and starts to feel a touch too heavy, but still remains nicely balanced. 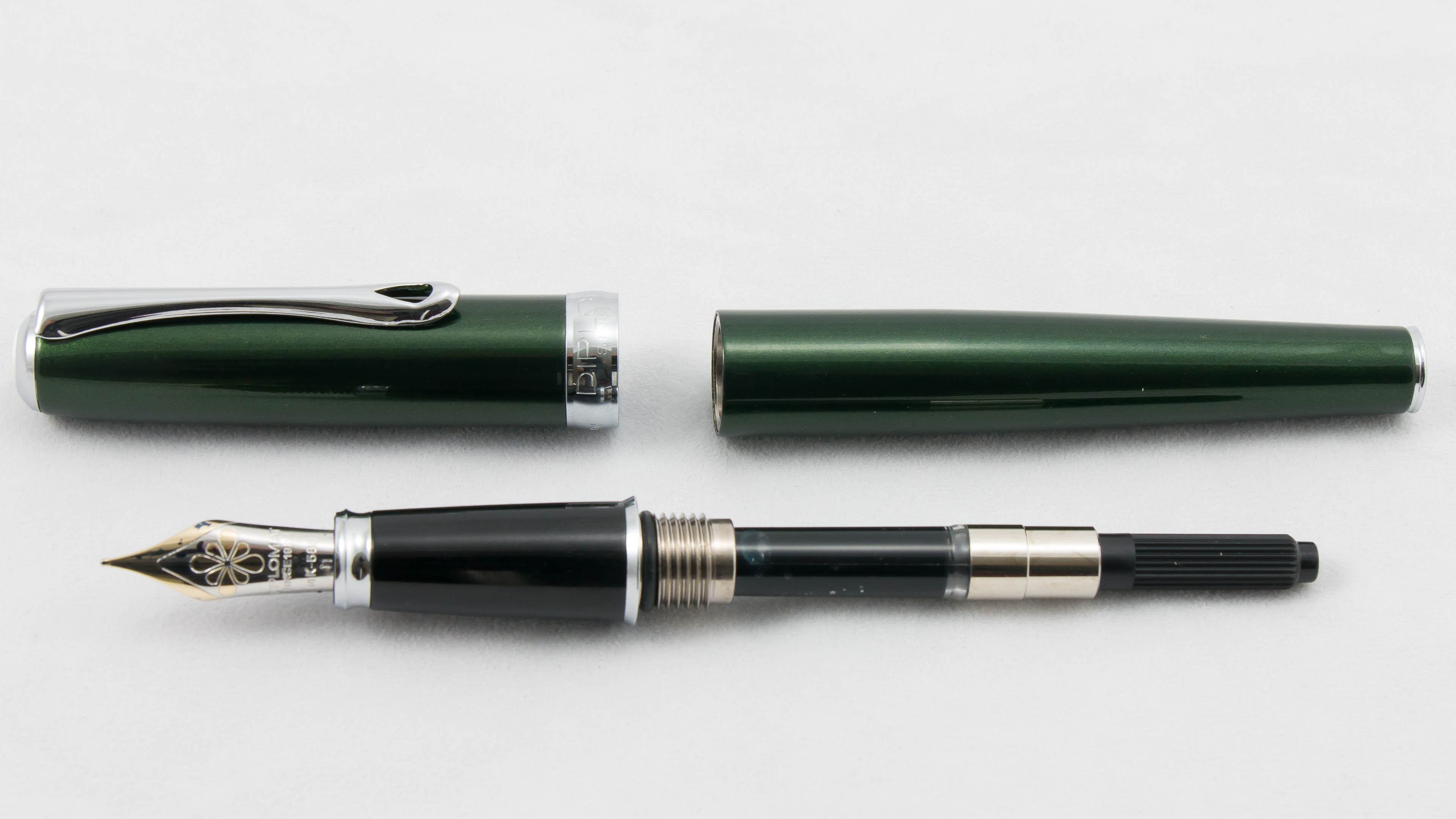 The Excellence A uses standard international cartridges and converters in either long or short formats. It comes with a high-quality converter. (Points of Distinction also gave me some blue ink cartridges to give away, but I don’t know if those are included with a pen purchased through the regular channels. Being metal, it should not be used as an eyedropper. 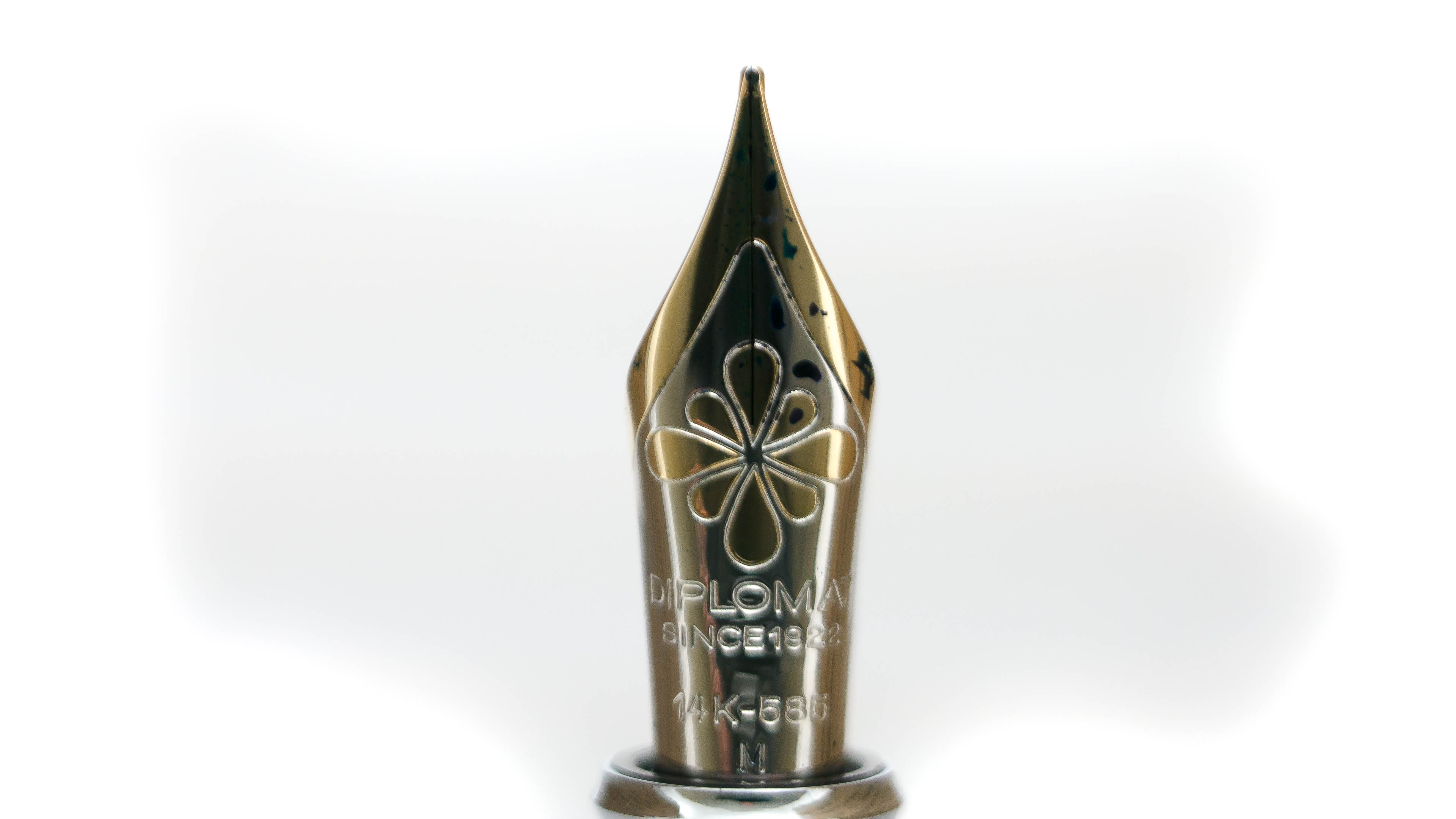 As nice as the body of the pen is, the real start of the Excellence A Evergreen is the 14k gold, #6 nib. The nib is bi-color, with the Diplomat logo in Gold against a rhodium-plated background. The nib lacks a breather hole which gives it a slightly more streamlined appearance. It is abundantly clear to me that the good folks at Diplomat seriously know what they are doing when they install and adjust these nibs. Much like the steel nib on my Aero, the 14k nib is extremely smooth, with almost no feedback at all. It did have just a touch of “singing” for the first few pages writing I did, but eventually changes from literal singing to figurative. (As in, “This nib really sings!”)

The nib is about what you might expect from a European medium, with, perhaps, a slightly wider line. Much of that may be due to the pen’s generous and insanely consistent ink flow. The gold nib with its slight hint of a cushioned bounce tends to flow wetter compared to the steel nib, as one might expect. Despite its wet ink flow, this nib never hard started, skipped, or exhibited even a hint of ink starvation. The nib and feed have been a consistent and repeated delight.

The http://penhabit.com/online-dating-unrealistic-expectations/ comes in a variety of finishes, including this Evergreen with gold or chrome trim, a couple of guilloche options, a couple of geometric patterns, and platinum, pearl, and black lacquers. The green version lists for $225 with a steel nib and $325 with a 14k gold nib. The nibs come in fine, medium, or broad.

I adore this pen, and love using it, but for some reason, the list price on this pen feels just a hint too high. Perhaps it is because I have developed an association with metal-bodied pens that comes from poor quality office supply store pens or cheap Chinese imports of dubious and inconsistent quality. It is an unfair comparison, because the Excellence A is rock-solid, robust, attractive, and comes with one of the most consistently wonderful nibs on the market today. A $325 price point may feel a little high, but I have paid a whole lot more for pens that have performed a whole lot more poorly. For me, the real value question on these giveaway pens is “Would I buy it again for myself?” In the case of the Excellence A Evergreen with this wonderful 14k nib, the answer is: absolutely.

For some reason I have been completely unable to determine, I am just not finding Diplomat pens in many retailers here in the US. So at the moment, it seems that the best option for purchasing these pens is to get them directly from the distributor at http://www.mydiplomatpen.com/excellence-a.aspx.

The pen for this review was provided free-of-charge for review and giveaway by Points of Distinction, the US Distributor for Diplomat pens. No additional compensation was provided, and all opinions expressed herein are my own.