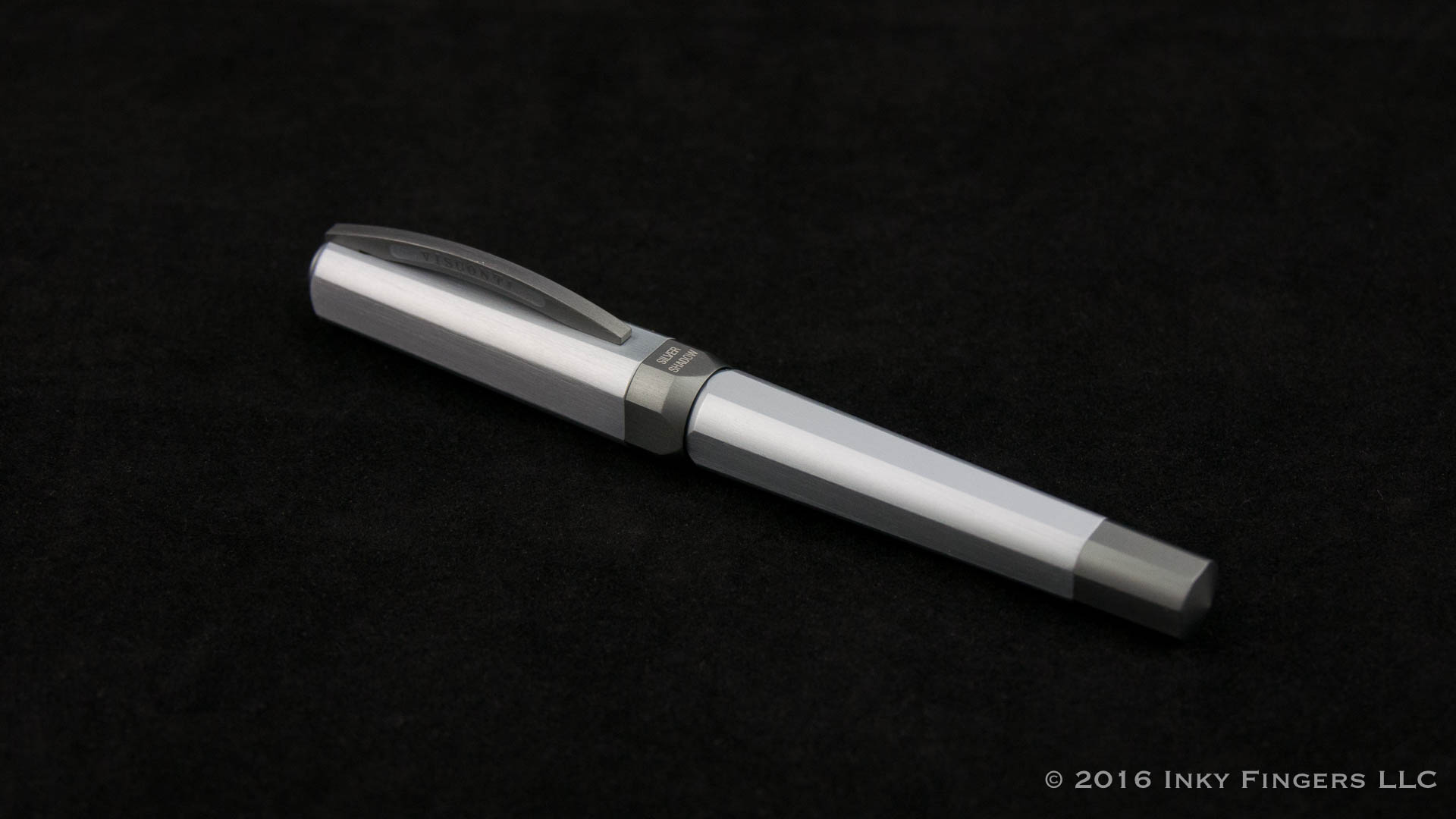 Italian pen maker Visconti introduced its Opera line of fountain pens in 2003, to much acclaim. In the intervening years, there have been a number of variations on the line, featuring a wide variety of different materials and slight design differences. The Opera line has, up until recently, been made mainly of plastics (acrylics, resins, and celluloids.)  In 2015, however, Visconti introduced a new entrant to the Opera fountain pen line with the Opera Metal. Made of an aluminum (or aluminium, if you’re in England) alloy called avional, these new Visconti opera models take the Opera line in a more clean-lined and modern direction than is common for Visconti. 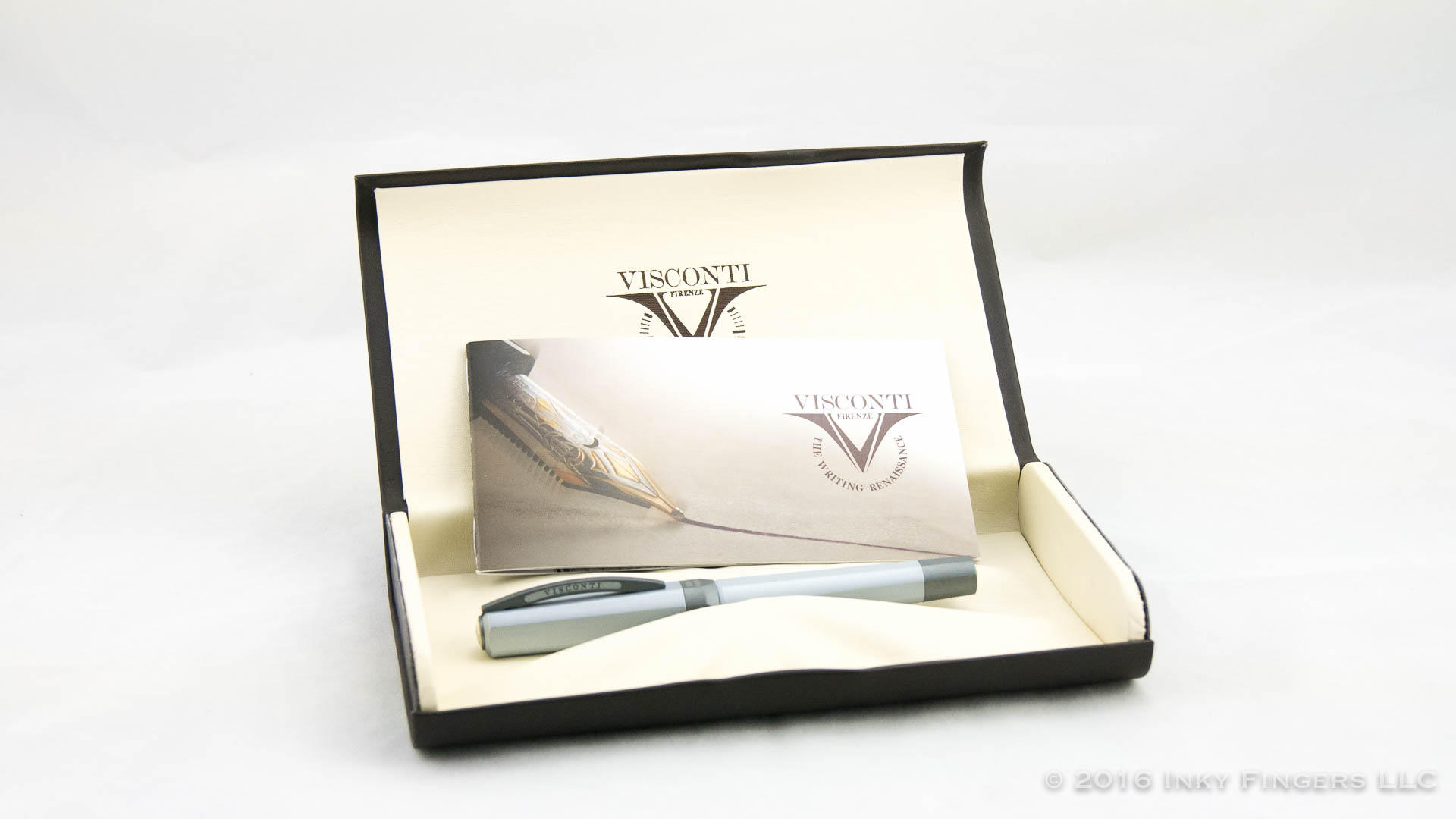 The pen comes in the standard Visconti thin clamshell box. The packaging is nice enough for a gift, but not unique or different enough to want to keep around or display (unless you’re like me and hold onto all of your pen boxes.) The pen comes wrapped in a plastic sleeve and includes a Visconti booklet and a Visconti-branded converter.

There are five color variations of the Opera Metal. Monza (black with red accents), Roadster (black with chartreuse accents), Silver Shadow (silver with titanium-colored accents), Speedboat (silver with blue accents), and True Black (black with chrome accents.) Visconti has never been one to be shy with materials, and that characteristic boldness shows up with the color choices, with the red, chartreuse, and blue accents being extremely bright and contrasting strongly against the most understated base colors. I reviewed the Silver Shadow version of the pen, which is, coincidentally, also the one I would have chosen if given my druthers.

The Opera Metal is made of a strong aluminum alloy often used in the aeronautics industry for parts that need to be lightweight, but will also be placed under a fair bit of stress. The coloring and anodization process on this materials makes it look as though the color is actually mixed into the metal, and less like it will scratch or flake off, as I have seen with some other anodized products.

The Opera line of fountain pens is part of Visconti’s “Squaring the Circle” design inspiration. Imagine a perfect circle on which four of the sides of the circle have been flattened slightly. The result, were you to take a cross-section of the pen, would be a profile that looks like an octagon, with every other side of the shape being somewhat rounded. It’s a very attractive profile for a pen; it provides some faceting without being over-the-top, and can really show off the depth inherent in some materials.  On the avional surface, the “Squaring the Circle” concept results in a pen that looks very high-tech, modern, and clean-lined–quite unusual for Visconti. 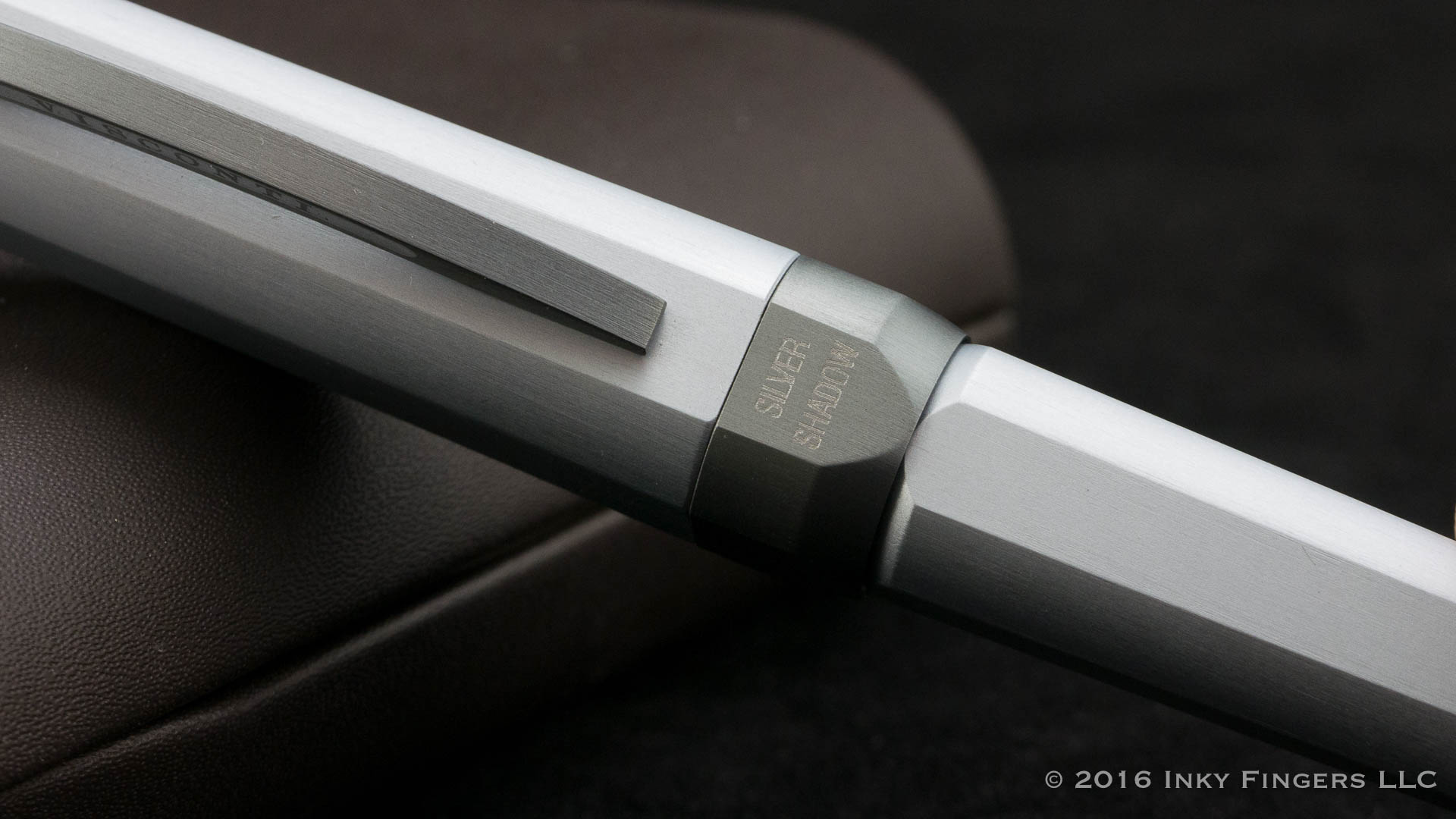 The pen I reviewed was the Silver Shadow version. It’s a really nice color combination with the lighter silver color of the body being offset with contrasting darker charcoal grey on the cap band, clip, and barrel finial. (I don’t care much for some of the other color combinations, which look a bit like the 1980s version of TRON to me: black with neon accents just isn’t my thing.) The anodized avional has a brushed, matte finish that is surprisingly comfortable in the hand, and instantly overcomes my general dislike of glossy metal pens. The finish feels quite rugged, as though this were a pen that could stand up to a beating. 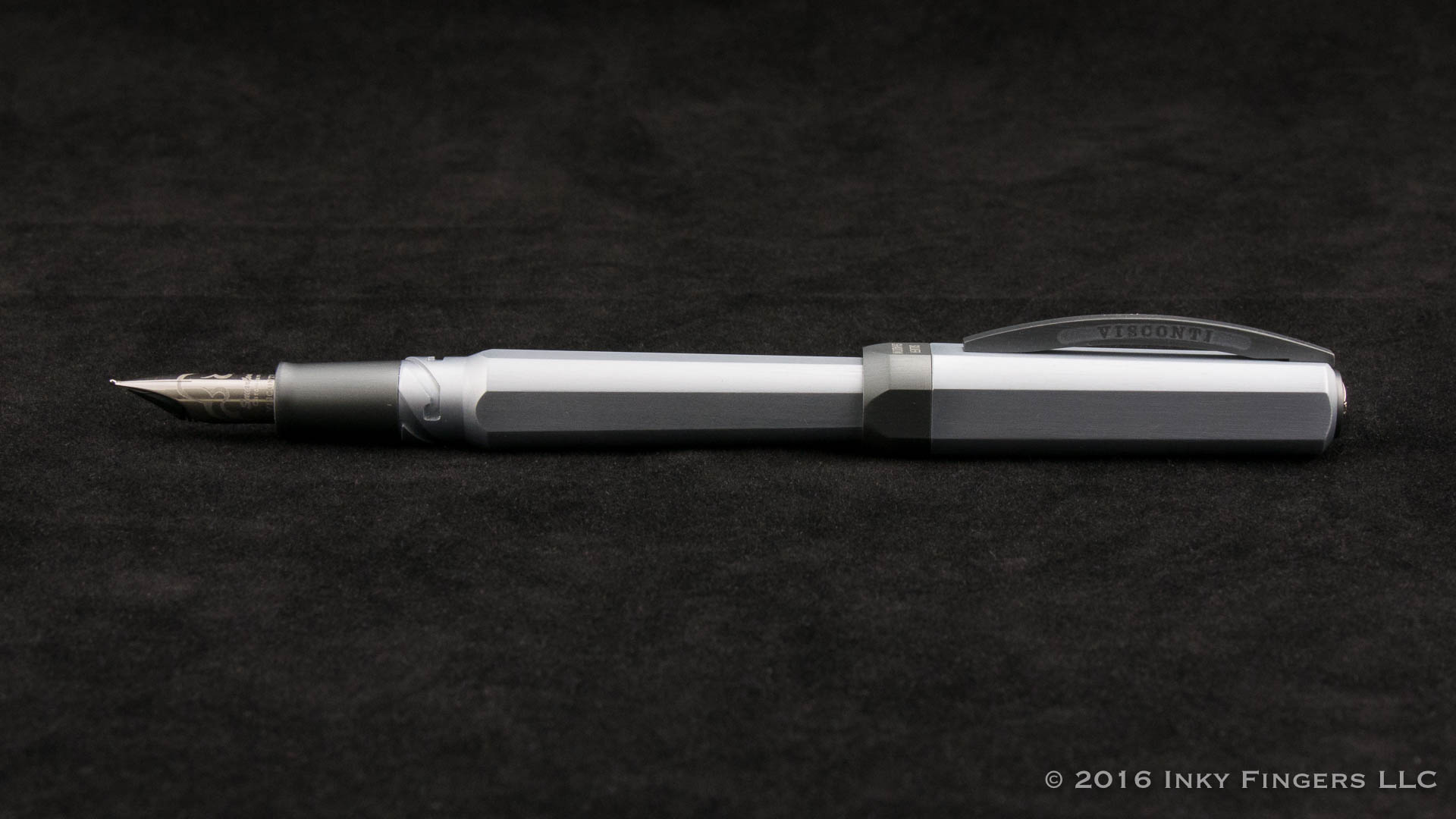 The cap starts, as many Visconti caps do, with a chromed Visconti medallion which can be replaced with other options from the “My Visconti” system. The medallion is offset with a ring of the accent color, which ties into the pen’s hinged, bridge-style clip.  I’ve never been too passionate one way or the other about the Visconti bridge clip (some people really hate it), but it works on this pen. The clean, swooping line in the accent color feels nicely integrated with the streamlined design of the rest of the pen. The cap flares out slightly to a wide cap band in the graphite/titanium grey color and has the words “Silver Shadow” engraved immediately underneath the clip. I don’t personally care for the choice to engrave the name of the color variation onto the pen. It’s unnecessary and distracts from the otherwise clean lines.

The remainder of the barrel is unadorned. It tapers gently down to a decent-sized finial (about 16mm) in the same accent color as the clip and the cap band. Capped, this pen is quite long, matching the MB149 and Pelikan M1000 in length. The cap includes a lot of headroom, though, because uncapped the pen is shorter, more closely matching the Pelikan M800 in length. It is still long enough to be used unposted, which is good because when posted, this pen is ludicrously long and unbalanced. As an all-metal pen, the pen has some heft, but it is lighter than you might expect for a pen of this size. 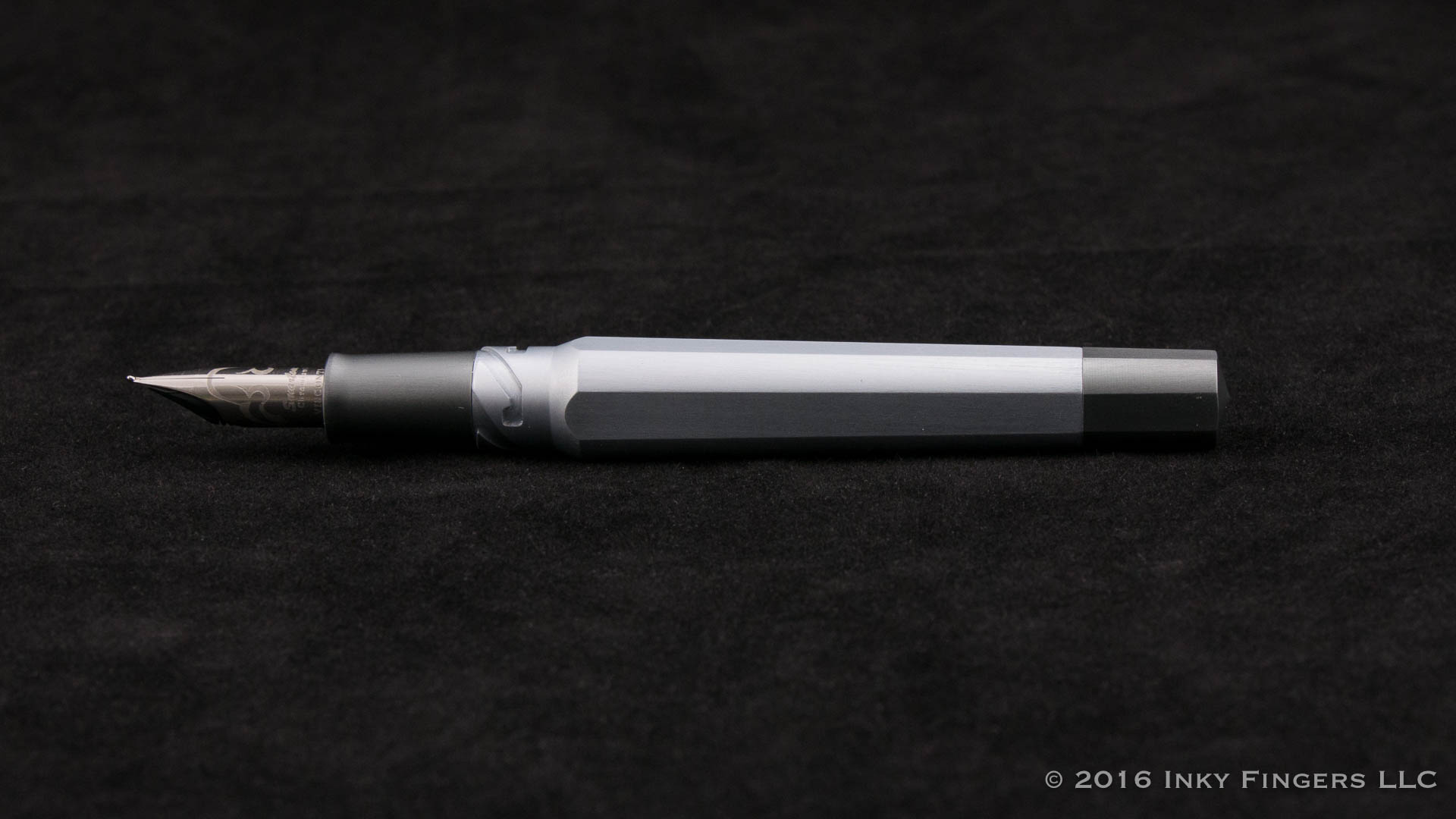 The cap attaches to the barrel using Visconti’s patented “hook safe latch system.”  The spring-loaded cap is removed by pressing down and rotating it about ¼ of a turn. Under the cap, there is a sloping step-down from the barrel to the section, the tracks for the hook safe latches, and then a short-ish avional section in the dark grey. The section tapers down slightly, and then flares out at the very end. 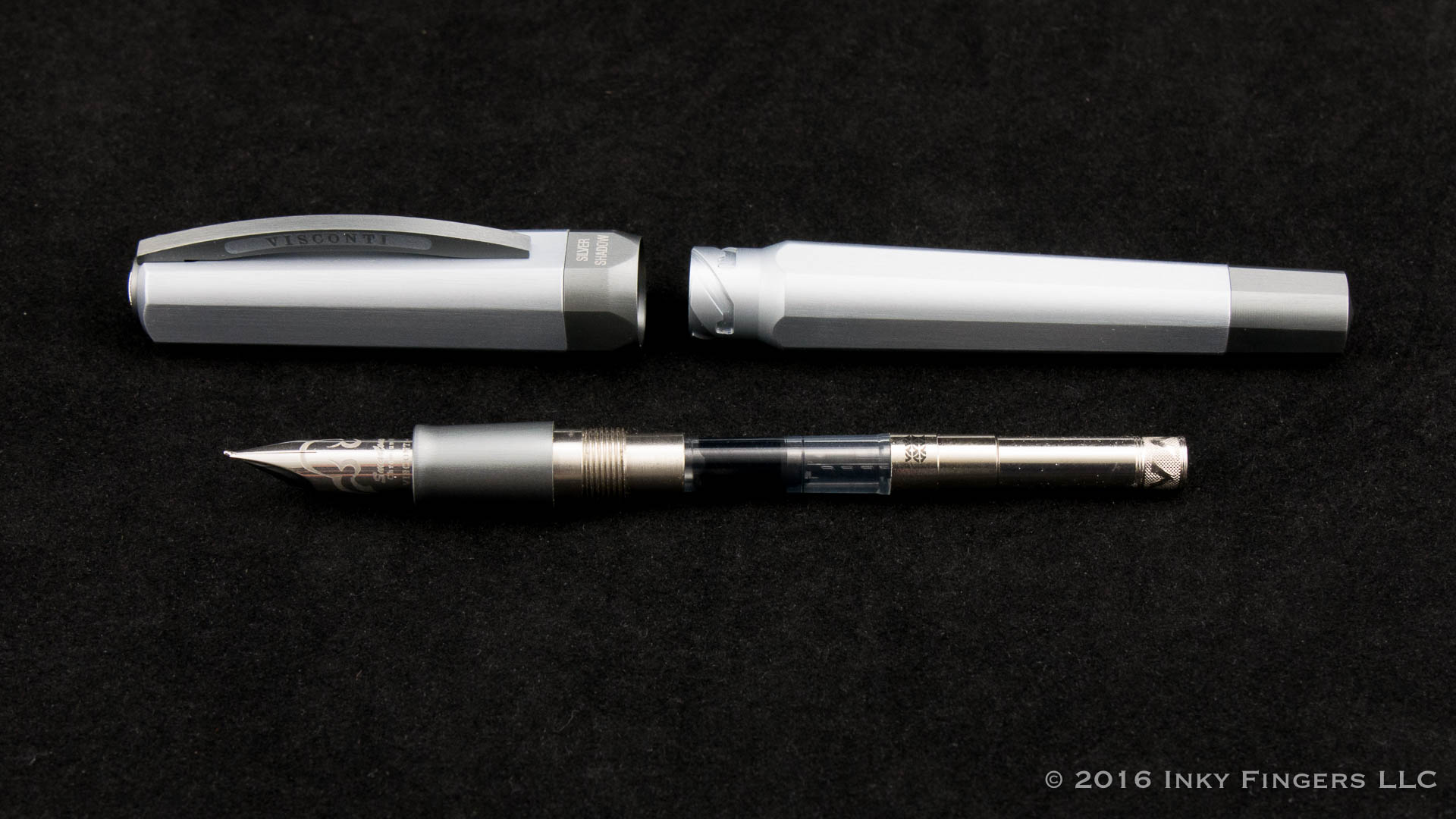 The section unscrews on very smooth metal threads to reveal threaded, Visconti-branded, standard international converter. Like many of Visconti’s converters, they have upgraded its look by attaching an engraved metal cap over the piston knob, which gives the converter a more robust appearance. I particularly appreciate that this converter screws in so securely; as a result, the metal of the converter piston knob does not rattle against the interior of the pen when it’s in place. I did find that a few of the inks that I tried in this converter tended to get “stuck” toward the back of the converter and make the pen ocasionally feel like it was running out ink.  It’s not a problem with the nib and feed at all, just a tendency of the surface tension of the ink to cause an air bubble to form in the converter. A few flicks of the pen and that usually resolved the issue.

Like most Visconti pens, the manufacturing of the pen body is flawless. The material joins are smooth and clean, the cap and barrel line up perfectly. Even the engraving on the side of the clip and the cap band are crisp. The section is smooth and comfortable, despite being made of metal, and the pens balance when unposted is quite lovely. (This pen can be posted, but I find it ungainly and unbalanced when it is posted.) 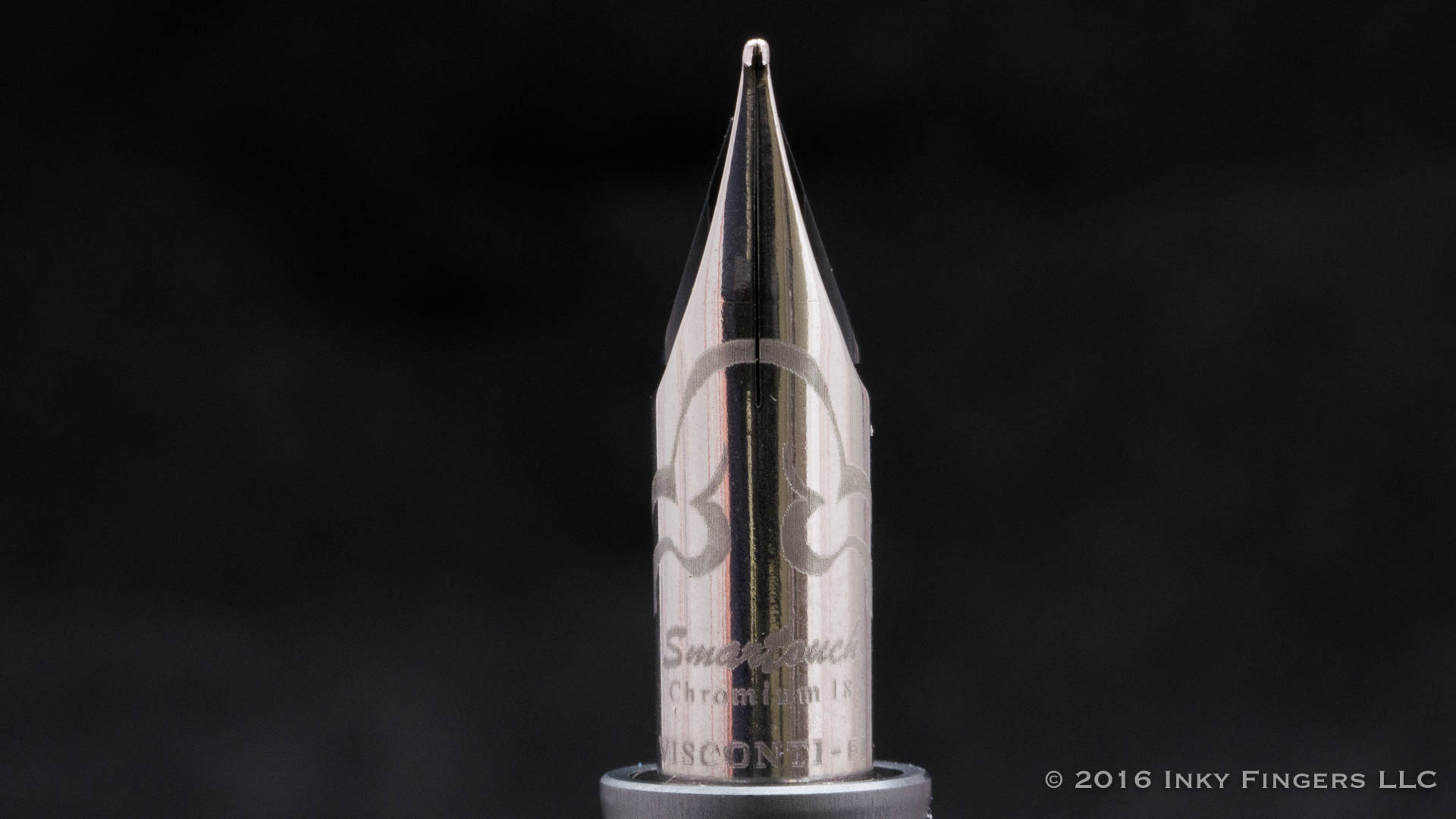 In my mind, the only place where Visconti made a serious misstep on this pen was in their choice of nibs.  Rather than stick with their 23k Palladium DreamTouch™ nibs, Visconti instead opted to incorporate their Chromium 18 Smartouch™ nib. The tubular (totally tubular, dude!) nib wraps around the feed and is supposed to help keep the pen from drying out.  (The pen didn’t have any issues with drying out while I used to, so while I can’t point to the nib design as causative evidence, there is a strong correlation.) The tip of the nib is bent up ever so slightly to help counteract the effect of the shape of the nib’s body. 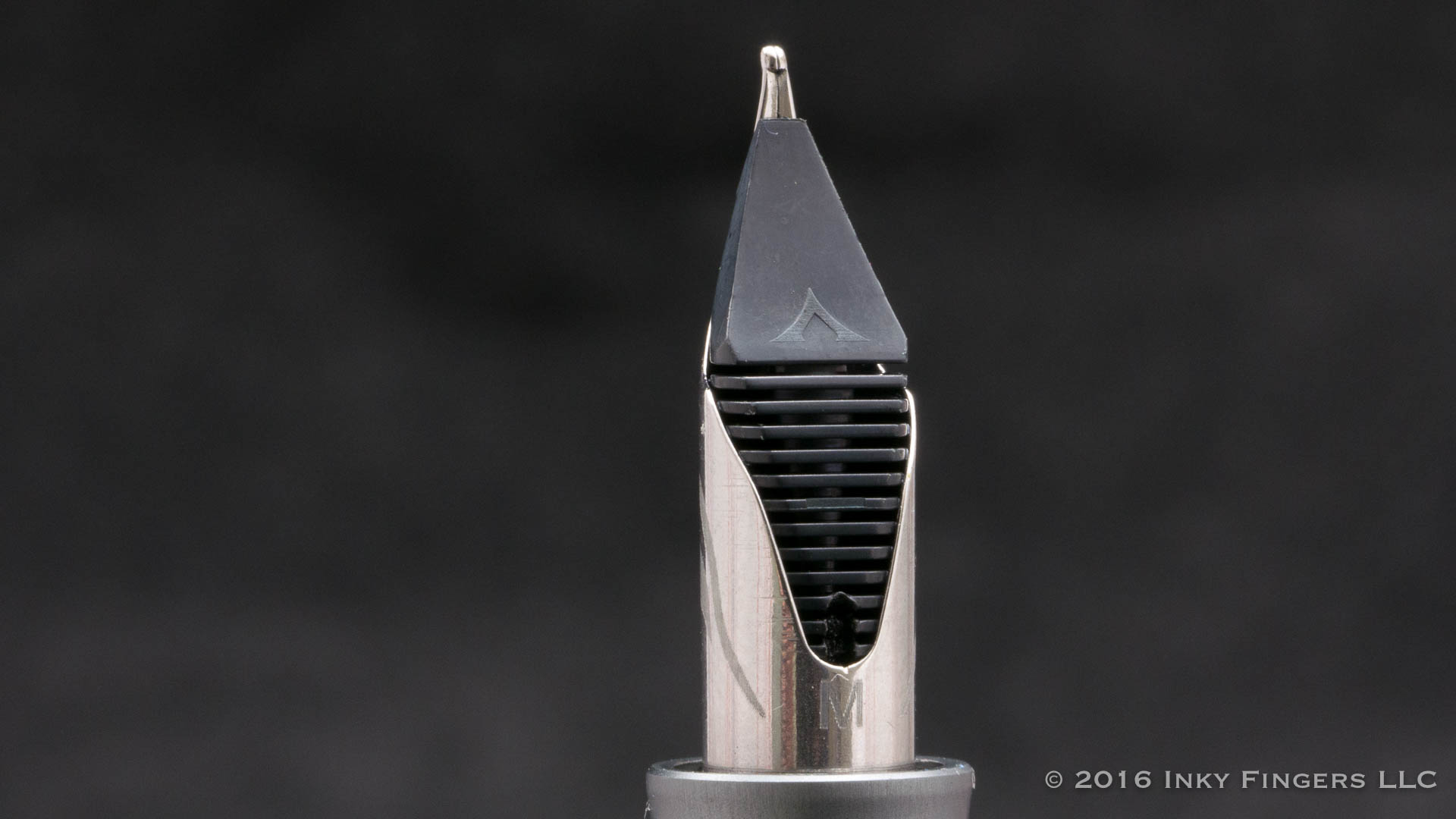 The Smartouch nib is a good (but not great) nib. My big problem with Smartouch nibs, though, has less to do with the nib itself, and more to do with Visconti’s marketing copy. A forum post on FPGeeks put it best: when one user asked what the difference was between Chromium 18 and regular 18/10 Stainless steel, another user replied “Branding.” I’m not a metallurgist, but as far as I can tell, the Chromium 18 Smartouch™ nib is, essentially, a steel nib.

Now, don’t get me wrong: it’s a good steel nib. The nib is smooth with a nice, moderate wetness. I didn’t see anything in the way of ink starvation. The nib was a touch over-polished, and so I got a couple of minor hard starts that were sensitive to the angle at which I held the pen. It was, by no means, unusable, however. And from a visual design perspective, the tubular nib looks really cool against the anodized matte finish of the pen.

When it comes to nibs, I try not to be one of those people who assumes that any pen over a certain price point should have a gold (or palladium, or titanium, or whatever) nib. I have several expensive pens with beautifully-writing steel nibs that I really love. However, Visconti pushes it a bit too far in this case. The retail price of the Visconti Opera Metal is $650, with a street price around $585. As good as the Smartouch nib is, it’s not good enough to justify a price point that high. I would much rather pay a few extra dollars to get a more expressive DreamTouch nib.

(I’m also not a big fan of trying to obscure the nature of your nibs and charge more by using a fancy name. (See also Delta Fusion nibs.)  I would prefer Visconti reigned their marketing folks in and were just honest about the fact that they’re charging $600 for a pen with a steel nib.)

In the end, I actually really like the Silver Shadow version of the Visconti Opera Metal. It’s a nice pen. It sits well in the hand, it feels balanced on long writing sessions. It is a consistent (if somewhat uninteresting) writer, and it’s a nice, understated change of pace for a company that’s known for its attention-grabbing designs and flashy materials. But the value proposition seems a little off for me with this pen. I like it…I just don’t know that I like it to the tune of $600.

The pen for this review was lent to me by Pen Habit viewer Aaron. No additional compensation was provided, and all opinions expressed herein are my own.