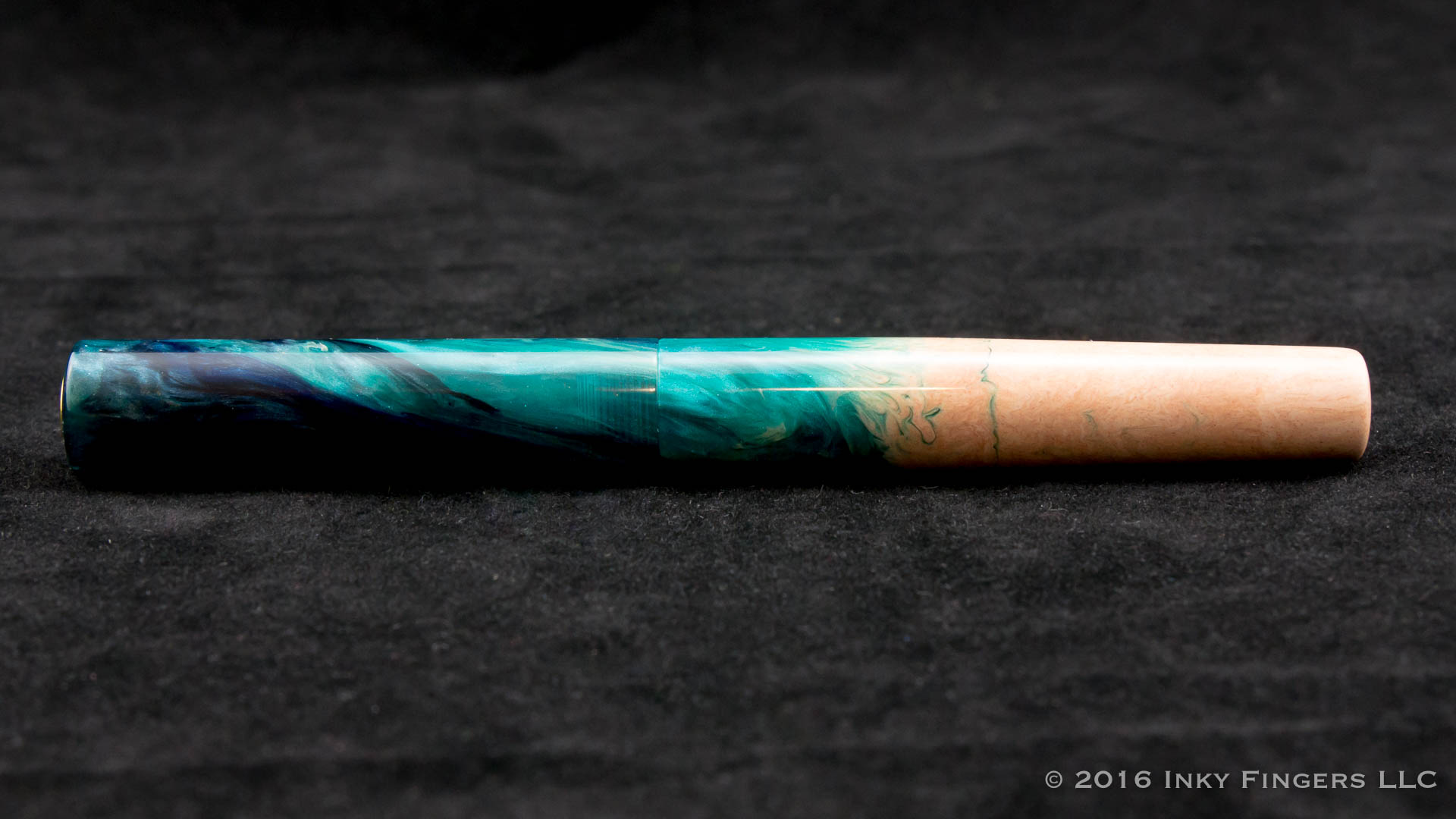 Seattle is a beautiful place to live and work. For about half the year, it is sunny, warm (but mild), and with no major extremes of weather. The scenery is beautiful, the people friendly. But starting each year in late October, the gray clouds move in and blot out the sun for about six months straight. Despite popular perception, it doesn’t actually rain a lot in Seattle: it just drizzles. Non-stop. Always, always drizzling and gray. Come January, after the warmth and twinkle of the holiday season have been packed up and stored away, and with the ludicrously short days of our northern latitude, the first part of each new year becomes an exercise in dodging Seasonal Affective Disorder and eating vitamin D supplements like they were Tic-Tacs. That’s why, come February or March, Seattleites start flocking to sunnier climes such as Mexico or Hawaii. (We rarely leave during the summer. Instead, that’s when everyone comes to visit us.)

I don’t travel a lot these days (traveling solo isn’t nearly as much fun as traveling with friends or loved ones), so my own personal approach to combatting the suicidal grays of Seattle winters has been largely limited to dressing in bright colors and keeping all the lights on in the house all the time. With my immersion into the fountain pen hobby, I found myself often supplementing my colorful clothing choices with colorful inks. That why I love bright colors like turquoise and green…they remind me of the upcoming spring. But I’ve never really had much luck finding pens that matched the bright, sunny mood about which I was trying to reminisce.

At the DC Pen show this year (2016), I came across the table of Hugh and Karol Scher and their son Matt. (Very masculine, virile name, by the way.) They had started a new pen company called Kanilea (which means “joyful sound” in Hawaiian) and the company’s product line was based around the family’s frequent trips to, and love of, the Hawaiian islands. (And, now that I think about it, that’s a really great way to make your family vacations tax deductible. Hmmm. I wonder if I could start a New York City-inspired pen line…) 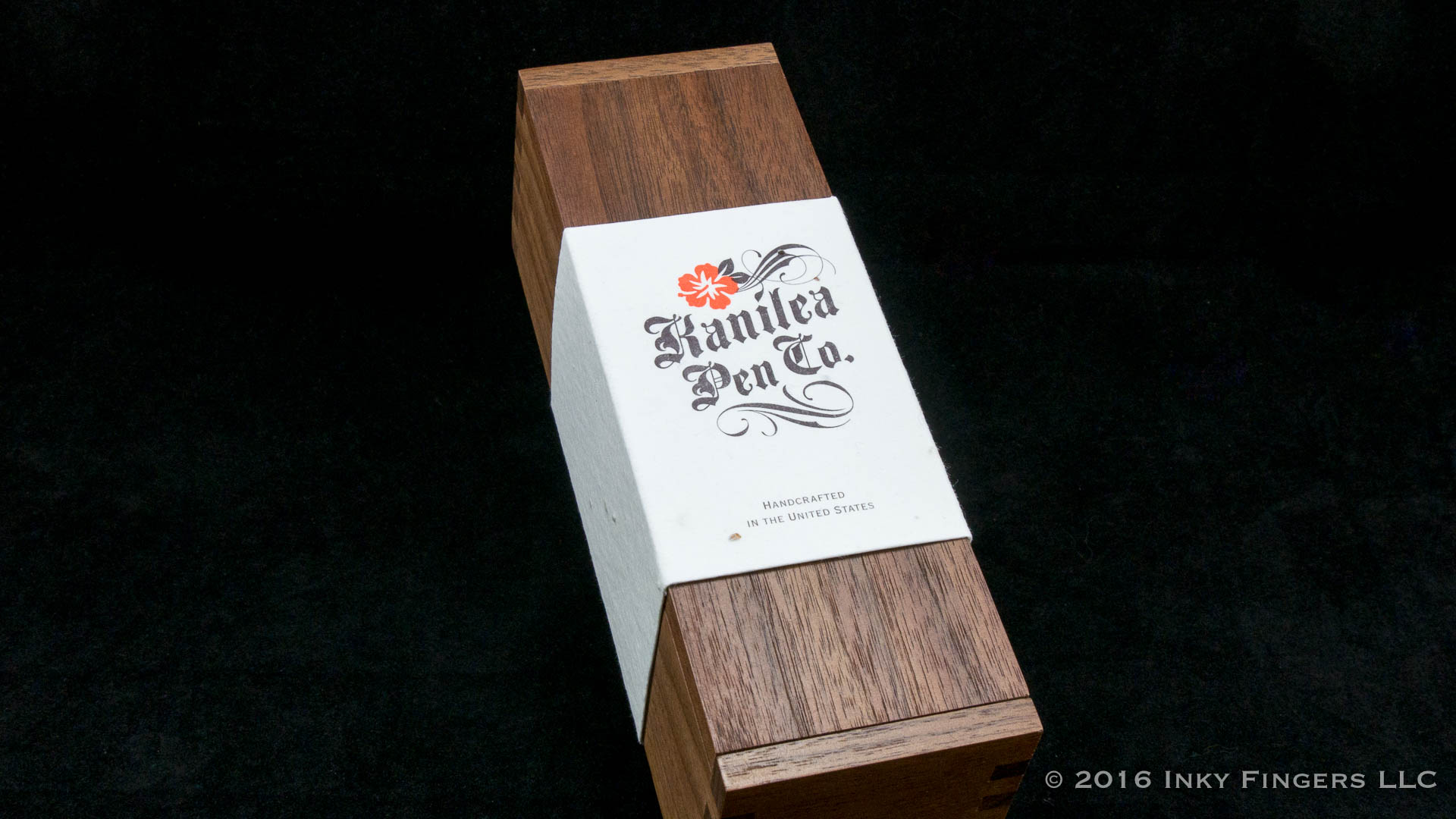 Now, I’ve been around the fountain pen hobby for only about four years now, and in that time, I’ve seen a lot of new companies and pen makers come along (and in some cases, go away as well.) The folks at Kanilea approached their entry to the pen world in a way that was quite unlike anything I had ever seen. Many businesses (in many industries) sort of grow up organically: they start from a germ of an idea, and over time they evolve into what they were meant to become. The Kanilea Pen Company, however, felt fully realized from soup to nuts right out of the gate with beautiful branding, packaging, a solid thesis around which their products are built, and an attention-grabbing, unique product line. With only a couple of minor exceptions, Kanilea immediately felt like a company that had been in business for years and years.

The idea behind Kanilea’s pen products is that they are based on the family’s photos from their many trips to the Hawaiian islands. Each photo represents some aspect of the Hawaiian ethos: the wildlife or the natural beauty. From photos of bright orange sunsets to neon green lizards to stark lava flows, the pens seem to capture what it is to be in Hawaii. Starting from that point Kanilea has contracted with a custom blank maker to create exclusive materials for the pens which mirror those photos. When I came across them at the DC show, they were heart-stopping. And within 10 seconds of talking with Hugh, I spied the pen I knew I needed to own. 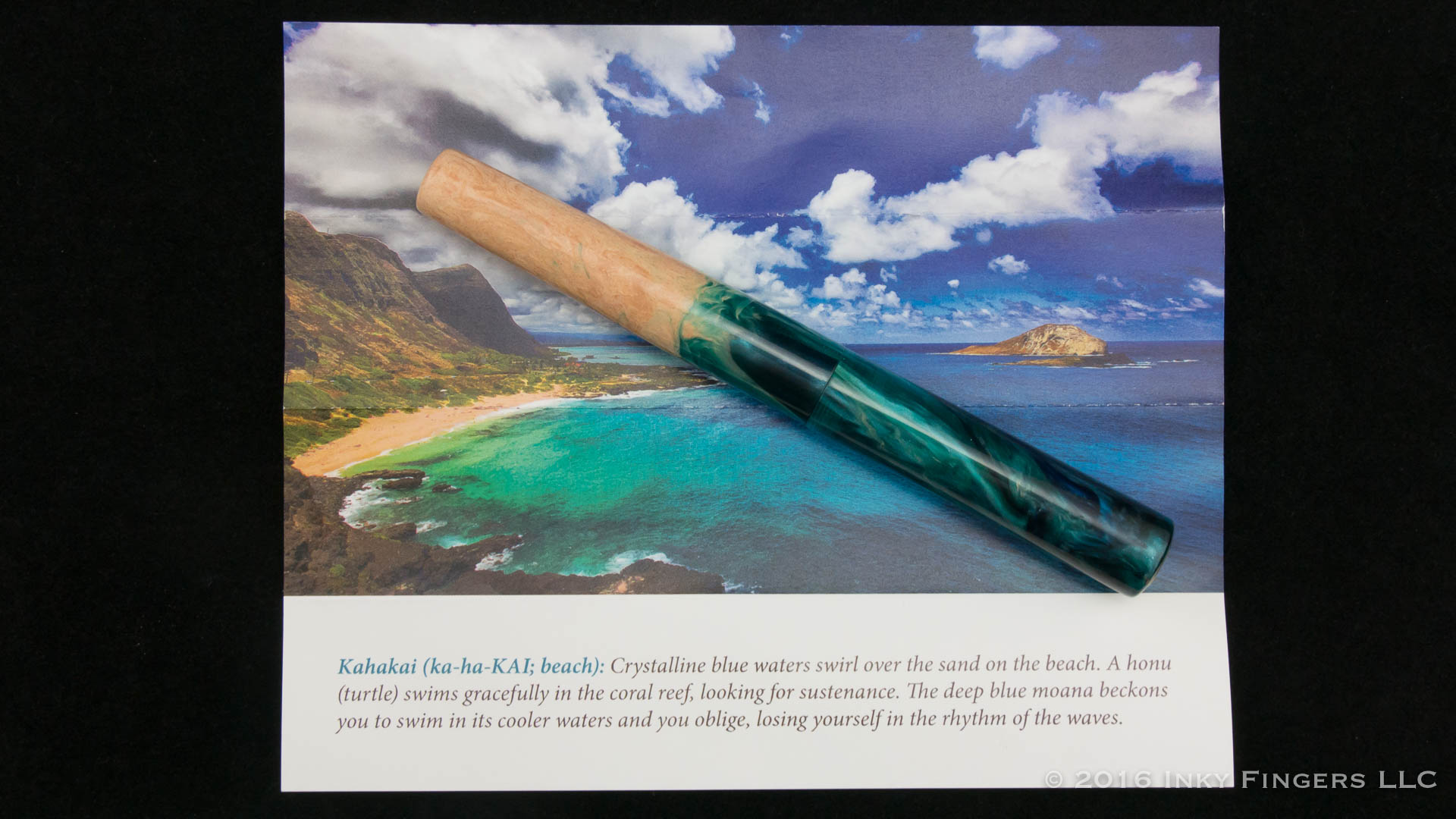 This model is called the Kahakai, which is translated to “beach.” As you can see from the photo above, the material from which the pen is made is a beautiful abstraction of the major elements in the photo. Looking closely at the materials, everything from the color of the blues and the turquoises of the “water” to the copper and gold-dust accented “sand” are just full of details you wouldn’t expect from a cast resin. The blanks themselves are a work of art, but then the Kanilea team gets ahold of the blanks and turns them into writing instruments. 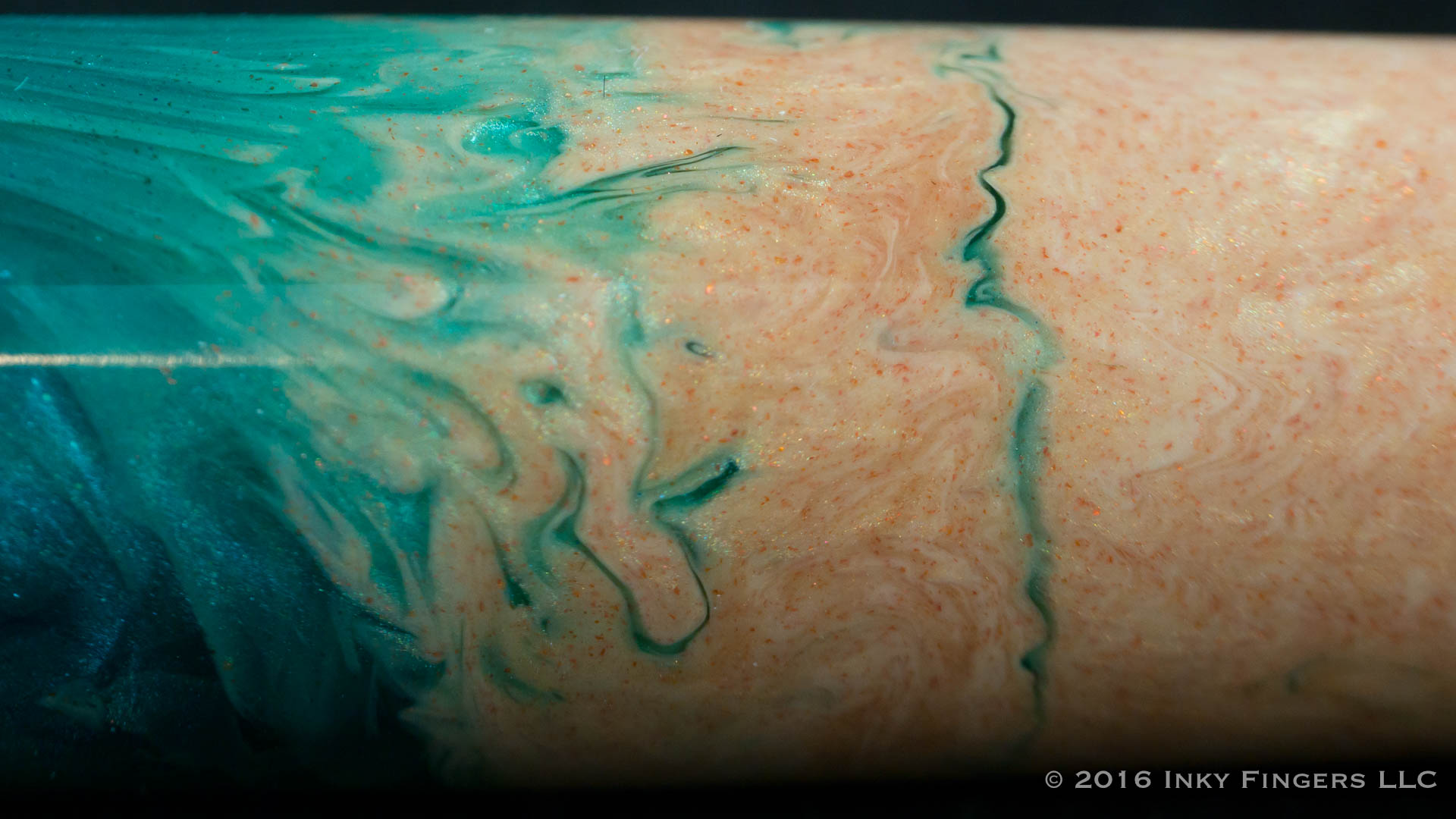 At present, the only model of fountain pen available on the Kanilea website is this “Classic Flush” design. It is a nearly tubular shape, with the cap and barrel being perfectly flush with one another, and a very slight taper toward the back of the pen. In many ways, the decision to start with this flush model is a wise one: I can’t imagine a form factor that would better show off the brilliance and motion of the resin. However, the simplicity of the design does have a bit of a drawback: this pen rolls around the desk like crazy. With no clip or no roll-stopper to interrupt its motion, you have to pray for a perfectly level desk; otherwise, you may end up chasing your pen around the table. 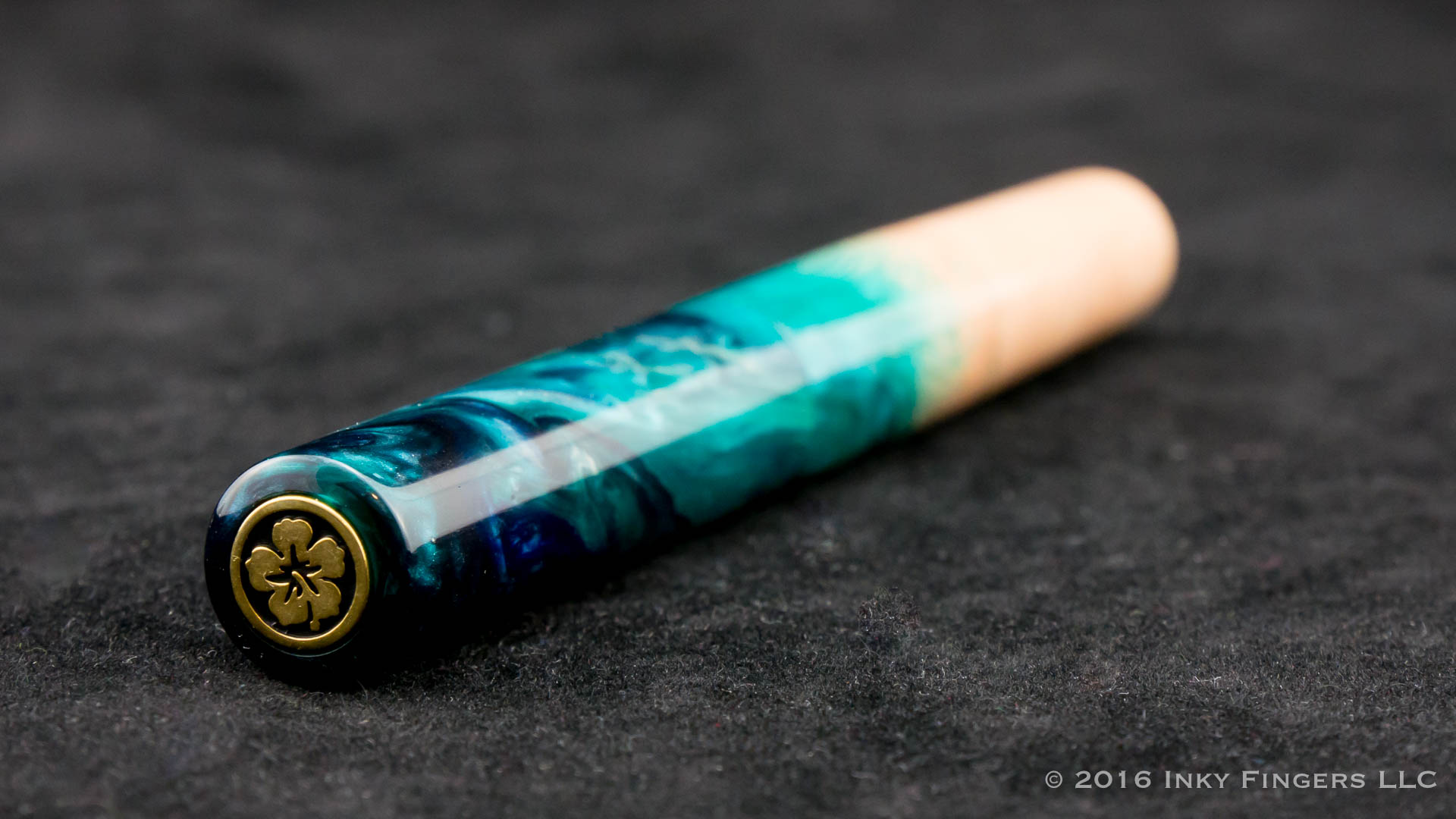 Inset into the top of the cap is a small metal medallion with gold plating and black enamel featuring the brand’s hibiscus flower logo. It’s beautifully inset, with super-tight tolerances, and feels very solid. The corners of each end of the pen are rounded down slightly to create a smooth transition from the flat ends to the cylindrical barrel, but aside from that, there is no other hardware or accent to detract from the beauty of the material. Personally, I would have loved to see a small hibiscus flower roll-stopper on the cap just to help keep the pen in place. I could also see a small flat spot cut into one side of the pen to allow it to lay flat on the desk. 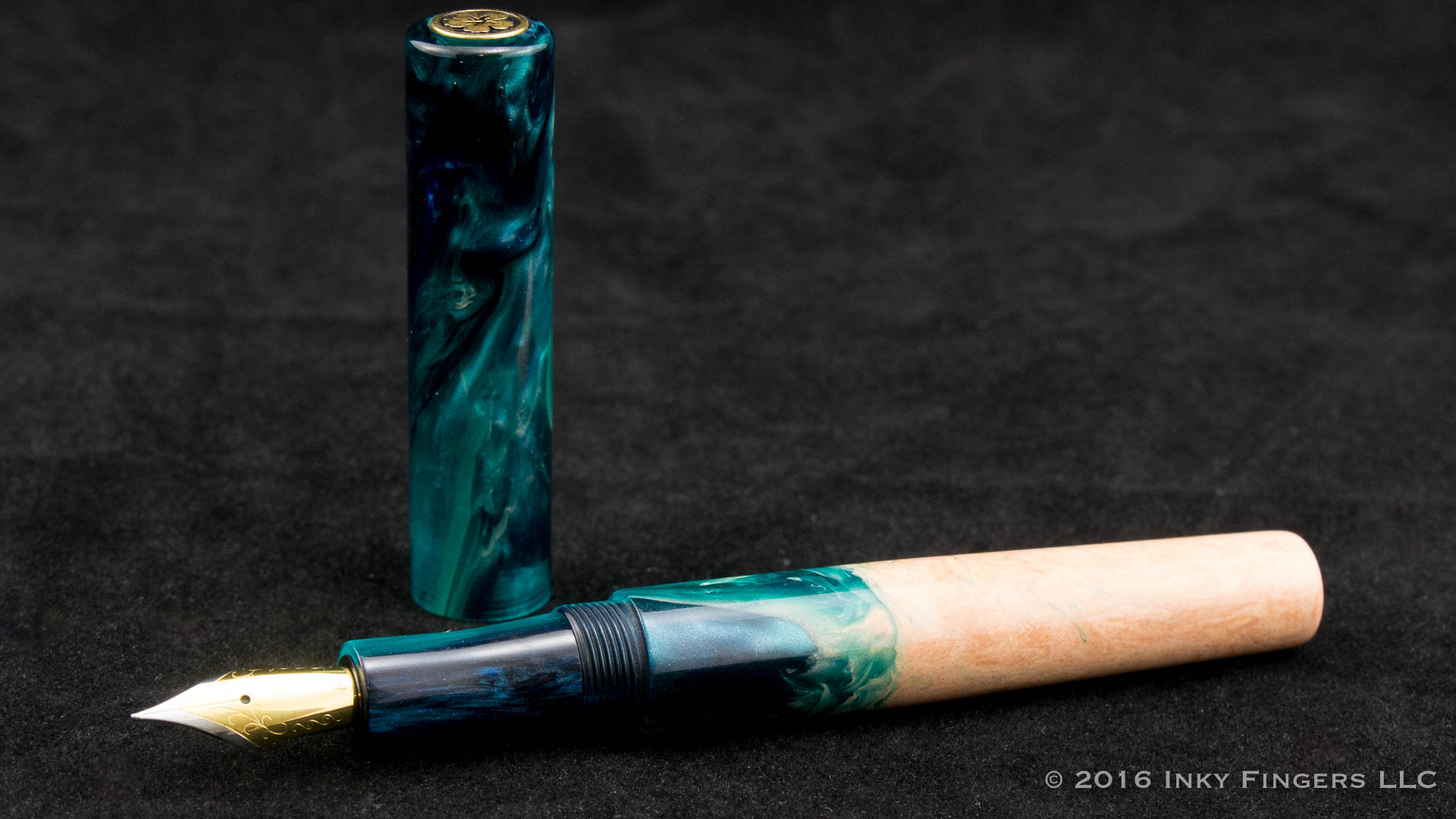 Under the cap is a long, concave section of the same material as the body of the pen. This longer section means that the threads and the step-down (a natural result of the flush design of the exterior of the pen) stay well out the way of most grips when you’re writing. The section unscrews from the barrel on tight, smooth threads, revealing a standard international converter (or cartridge, depending on your preference.) Kanilea Pen Company has done the (I think) wise thing and has decided to incorporate threaded converters into their design. The included converter appears to be a Schmidt K5-style converter, albeit with threads to hold it in place. The pen could also be converted to an eyedropper-filled pen with only a bit of silicone grease if you so desired. 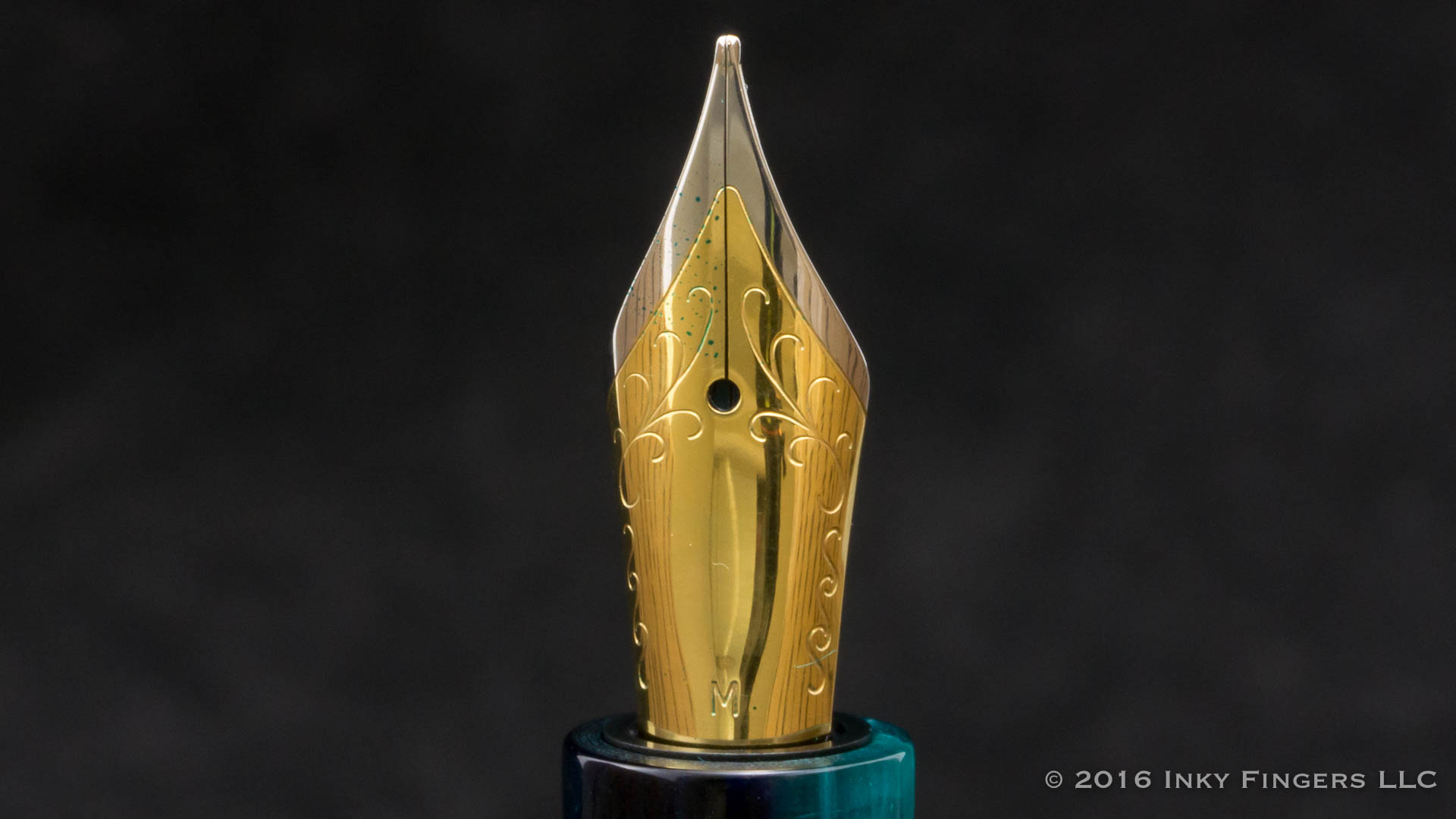 The pen features a #6 Jowo steel nib with no marking on it at all. In some ways, the nib was the only disappointment of the pen for me. Almost all small manufacturers and custom penmakers use #6 Jowo nibs. I’ve used dozens of Jowo steel nibs in my admittedly short time in the fountain pen hobby. With the attention that Kanilea paid to the soup-to-nuts feel of the brand, it was something of a surprise that the nibs were blank and contained no branding at all. At the very least, I expected the hibiscus flower logo to make another appearance on the nib face. It may be a question of the volume not being high enough to justify having the logo manufactured into the nib, but I feel like it ought to be engraved at the very least. It would be nice for the nibs to match the pen a bit more. 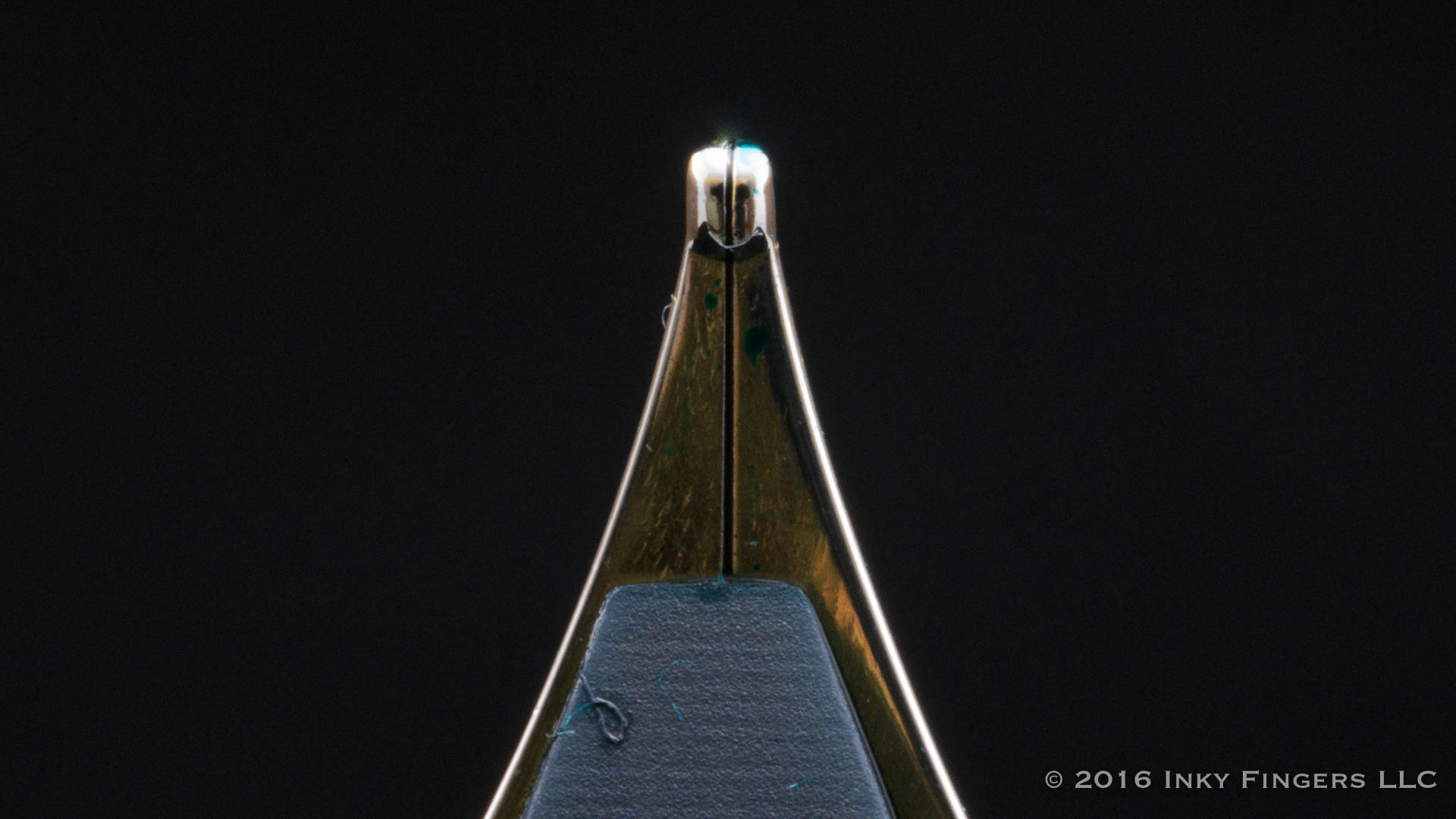 The other problem with most Jowo nibs is that the writing experience is good, but rather pedestrian. (Jowo makes their default nib to appeal to the middle-of-the-road consumer in terms of smoothness, wetness, and feedback, assuming, I suppose, that the manufacturer will do the final tweaking on the nib.) Whatever the case, the medium steel nib on this pen is, I believe, the single best steel Jowo #6 I’ve ever used, and among one of the best overall steel nibs I’ve ever used. The Kanilea folks likely did some extra work on the nib to turn it into one of the wettest, smoothest experiences I’ve had with a steel nib. There was no indication of any writing problems (ink starvation, baby’s bottom, hard starting, or skipping.) And even after being capped and unused for weeks at a time—done sheerly as a test, not because I wasn’t aching to pick up the pen and write with it more often, mind you—it started up without any problems. 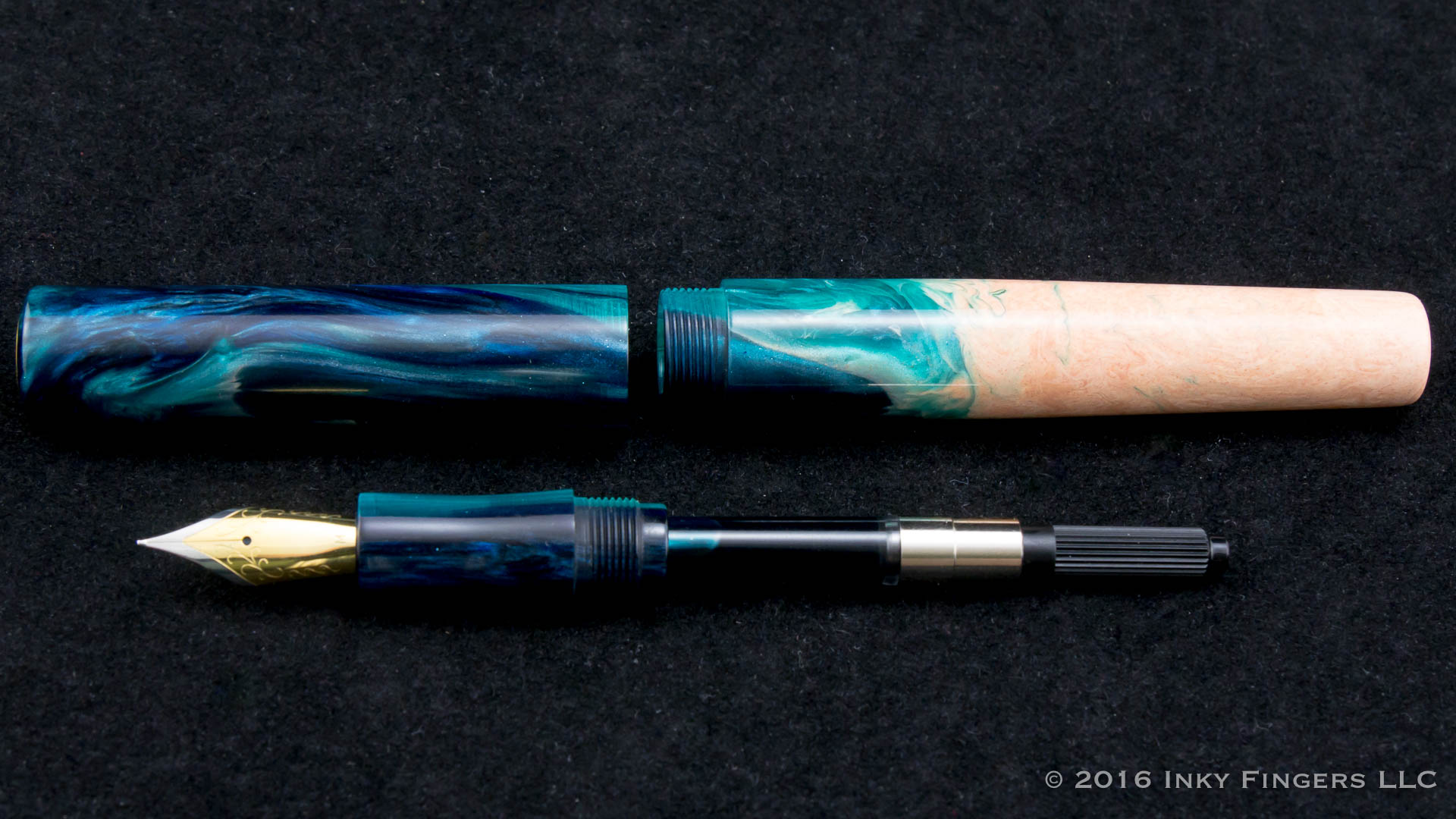 In the hand, I find this pen extremely comfortable. As mentioned earlier, the longer, concave section feels quite ergonomic, and the larger size coupled with a light weight results in a pen that I felt comfortable using for several consecutive pages of writing. The smooth nib and wet ink flow did cause me to empty the converter a touch more frequently than I liked, but that’s a really good problem to have in my opinion. 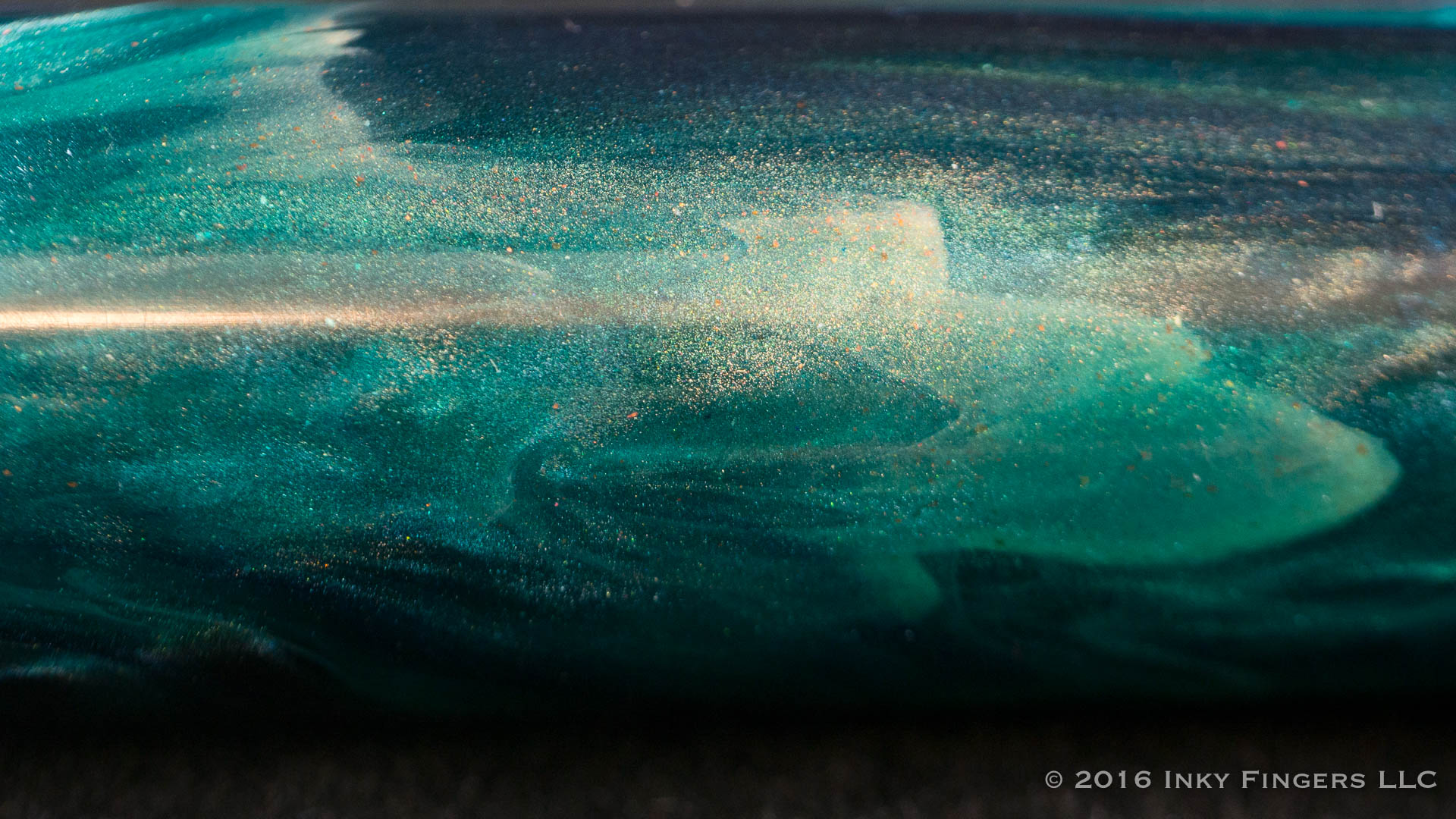 The Kanilea Kahakai fountain pen retails for $395 with a steel nib. (Steel nibs were the only option available at the time of purchase, but gold nibs are now available for an up-charge on the website.) That is, to be honest, a pretty steep price for a steel-nibbed pen. I have only one steel-nibbed pen in my collection that cost more money (a custom pen out of some pretty special materials), and it beats the Kahakai’s price by only five dollars.

I have heard from several folks in the community that they feel that price is too high for what you’re getting, and I can understand what they’re saying. You can go so custom pen makers and have custom pens made (in some cases, from custom materials) for less. But as the owner of my own brand, I also understand that there is often a lot that goes into the making, adjusting, marketing, packaging, and fulfillment process that the public doesn’t see. So, while the price seems rather high, I can also see the value in it. I can tell you this much, though: if given the choice to purchase this pen over again at the same price, I would do so in a heartbeat. In fact, I’m looking into ordering a second pen from them shortly, because there are a couple of other models that I’ve been eyeing. 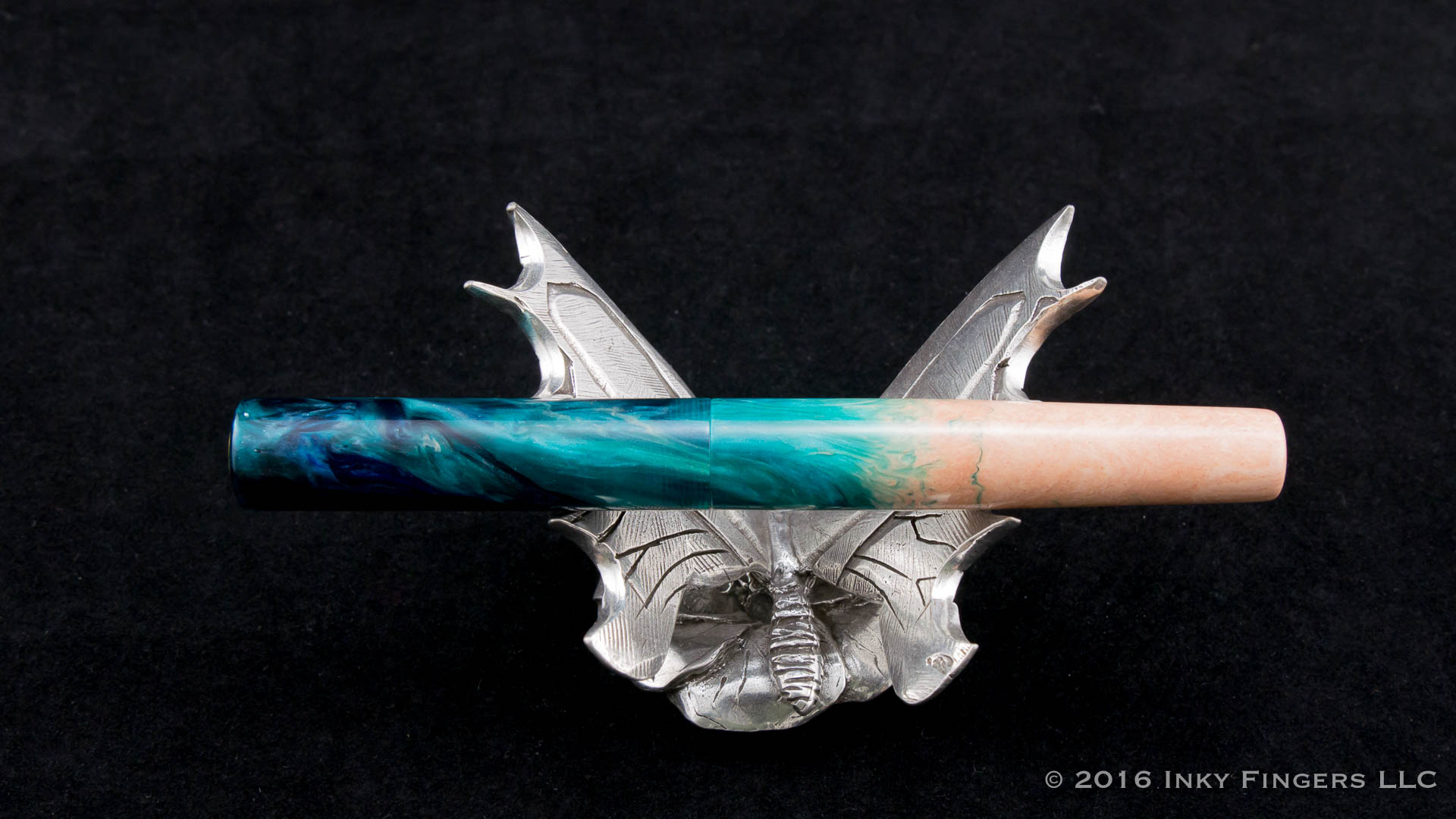 Another quick note about the nib: as much as I like the steel nib (and I do), I feel like this is a pen that deserves a nice, juicy, bouncy gold nib. So, I’ve ordered a semi-flex gold nib from fpnibs.com to replace the included nib. Once I install it (which I’ve been waiting to do until after the review was recorded), I expect this pen will remain inked for most of the rest of this drab, gray Seattle winter and until my flowers start blooming in the spring. I won’t be traveling to Hawaii this year, but at least I can carry a little bit of it around with me.

Disclaimer: The pen in this review was purchased with my own funds. Kanilea Pen Company has not been a sponsor of The Pen Habit at the time of this review, but they have included Inky Fingers notebooks in some of their promotions. Despite that, all opinions expressed herein are my own.