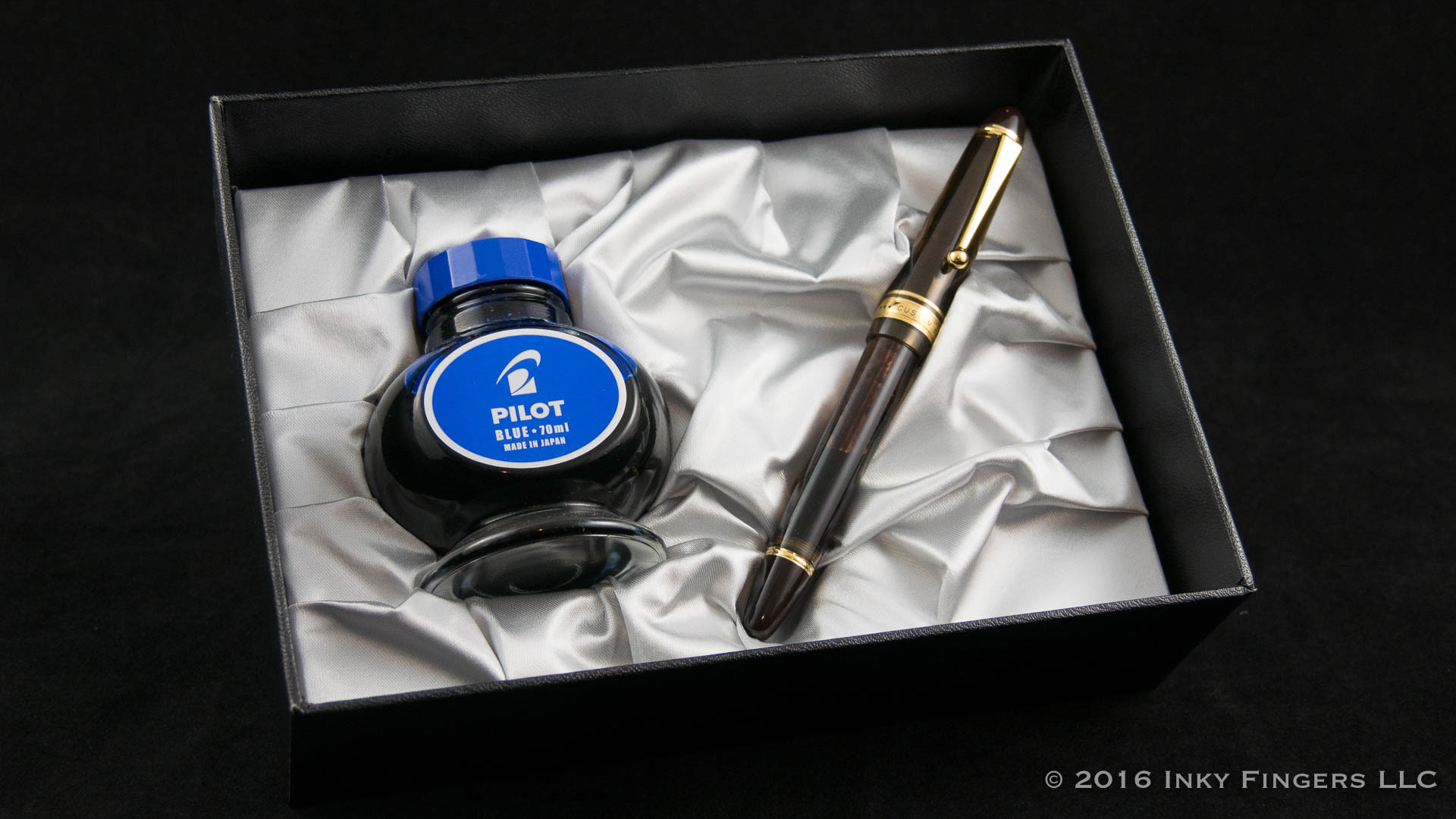 If Pilot’s production line could be said to have a flagship pen, the Pilot Custom 823 would probably be it. Visually, it’s not the most remarkable pen in creation: it’s a standard cigar-shaped pen that, were it not for a few tell-tale differences, would be nearly indistinguishable from any variety of other cigar-shaped pens out there on the market.  Yet, despite its rather ho-hum appearance, it is one of the most highly-praised pens on the market—especially among we pen bloggers.  I have watched over the years as blogger after blogger has fallen over themselves to sing the praises of The Pilot Custom 823. 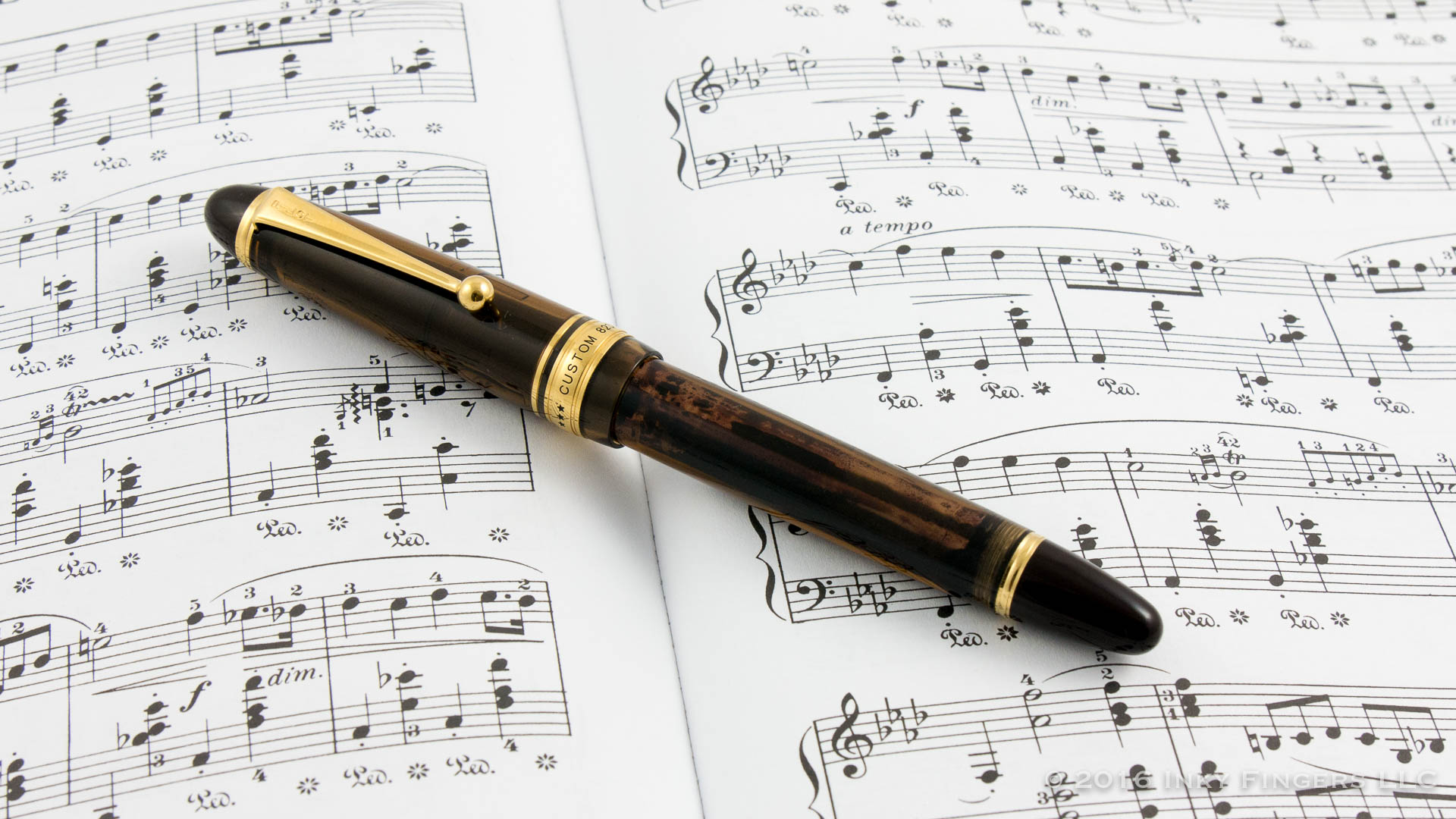 And yet, over the last several years, I could never talk myself into picking up one for myself, despite it having been the most requested review among Pen Habit viewers. The looks of the pen never excited me all that much, and after so many glowing reviews, I began to wonder if perhaps there had developed an echo chamber around the pen that elevated it above where it should be in the pantheon fountain pens.  Now, after having used the pen for several weeks now, I am really kicking myself for my obstinate contrarianism. 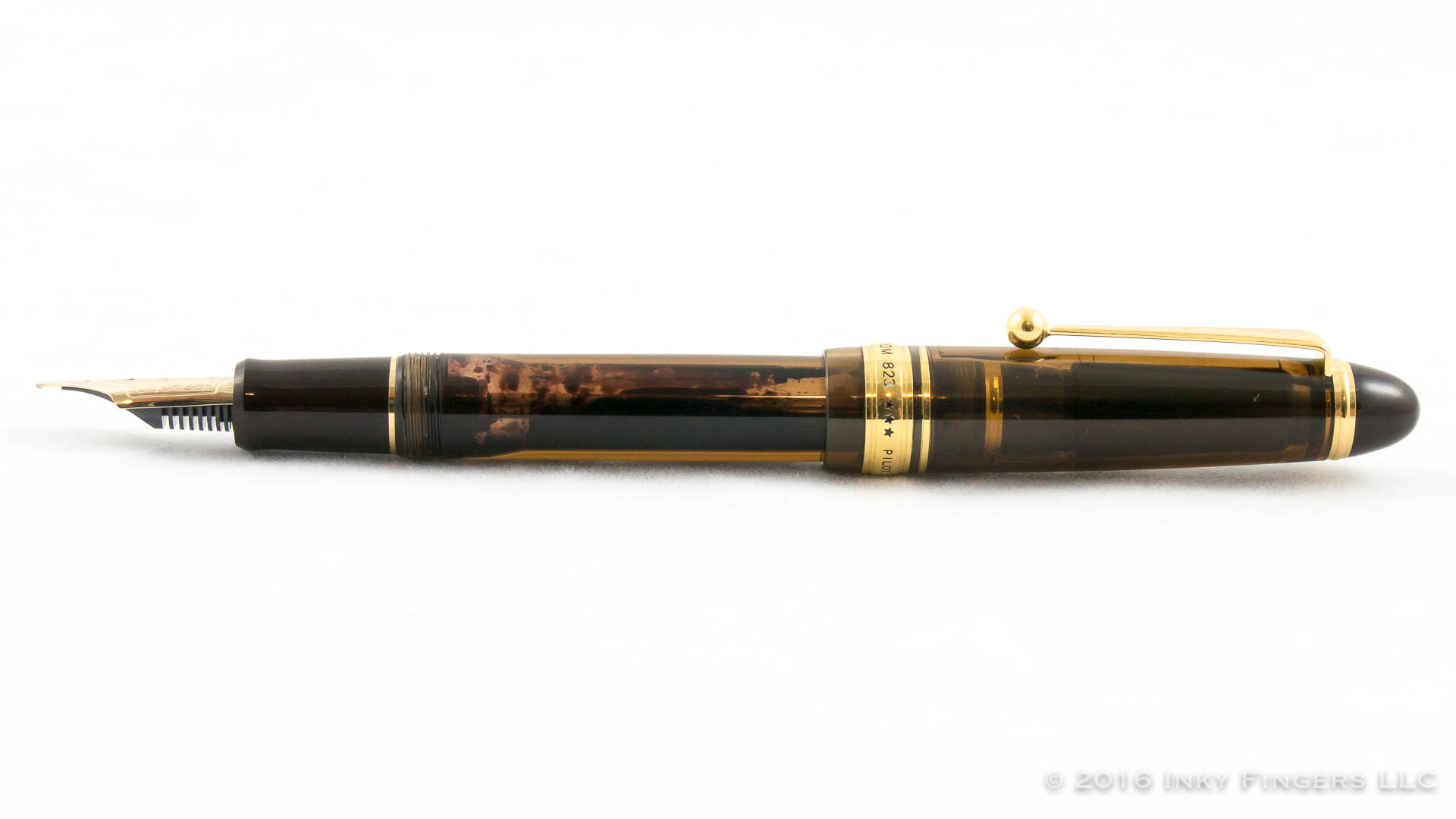 In the US, you can have the Pilot Custom 823 in any color you want, so long as it’s a clear, amber-colored acrylic. (The pen is available in clear and smoke colors as well, but Pilot USA does not import those colors.)  It’s a nice brown color, a bit different than any other pen out there on the market. 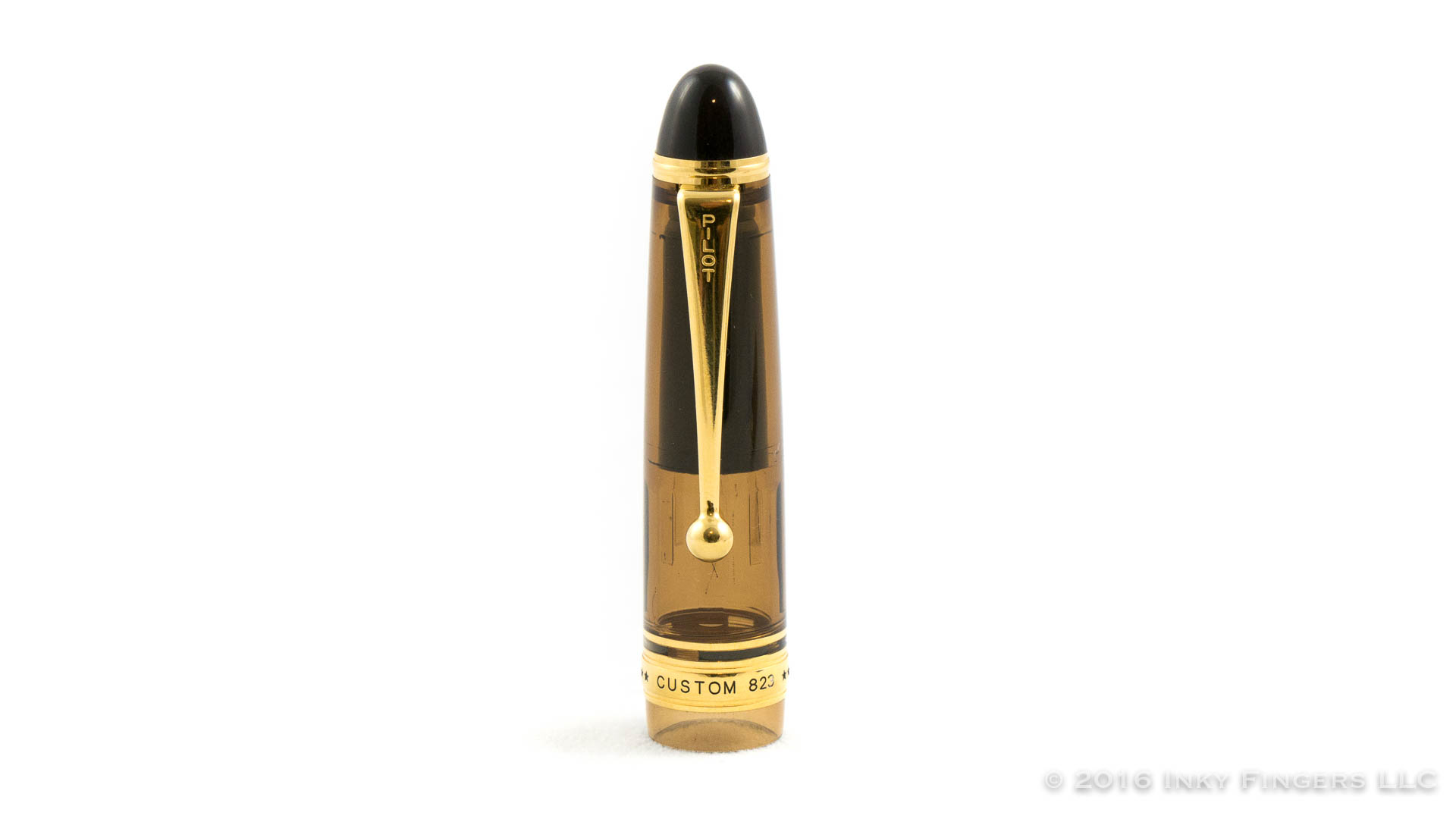 The pen’s shape is the very definition of a cigar-shaped or torpedo-shaped pen. It’s a long pen with rounded finials, and is a bit narrower than similar pens (like the Montblanc 146), with more blunted finials. The clip is very traditional, with an enlongated triangular shape and a ball on the clip end. The clip is embossed with “Pilot”, but is otherwise unadorned. The cap is finished off with two cap bands, a thin band above and a thicker larger band underneath onto which is embossed the words “Pilot Custom 823,” “Made in Japan,” and a few stars to separate the phrases. The rest of the barrel is transparent amber as well, with another gold washer between the barrel and the black acrylic filler knob. 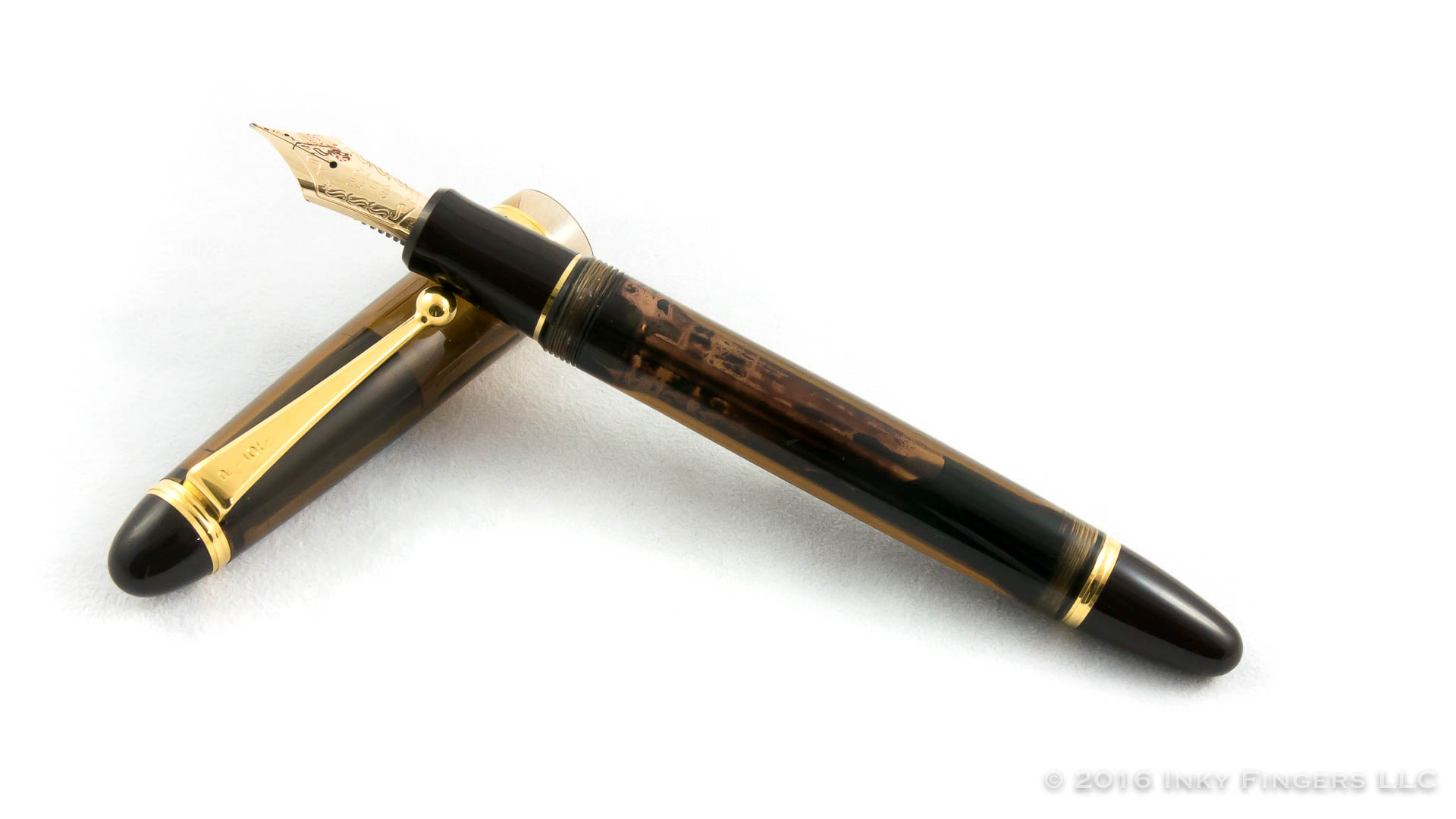 The pen’s screw-on cap can be removed with one and a half turns on some of the most smoothly-manufactured threads I’ve ever seen. Underneath, you find a lighly-contoured section of black acrylic and one of Pilot’s #15 nibs in 14k gold. (Pilot uses a different numbering convention for their nibs, so the numbering doesn’t mean the same as with your standard #5/#6 nibs.) The nib has some scrollwork on it, but I don’t find the design of the nib to be particularly inspiring. Like the pen, it feels refined but understated. 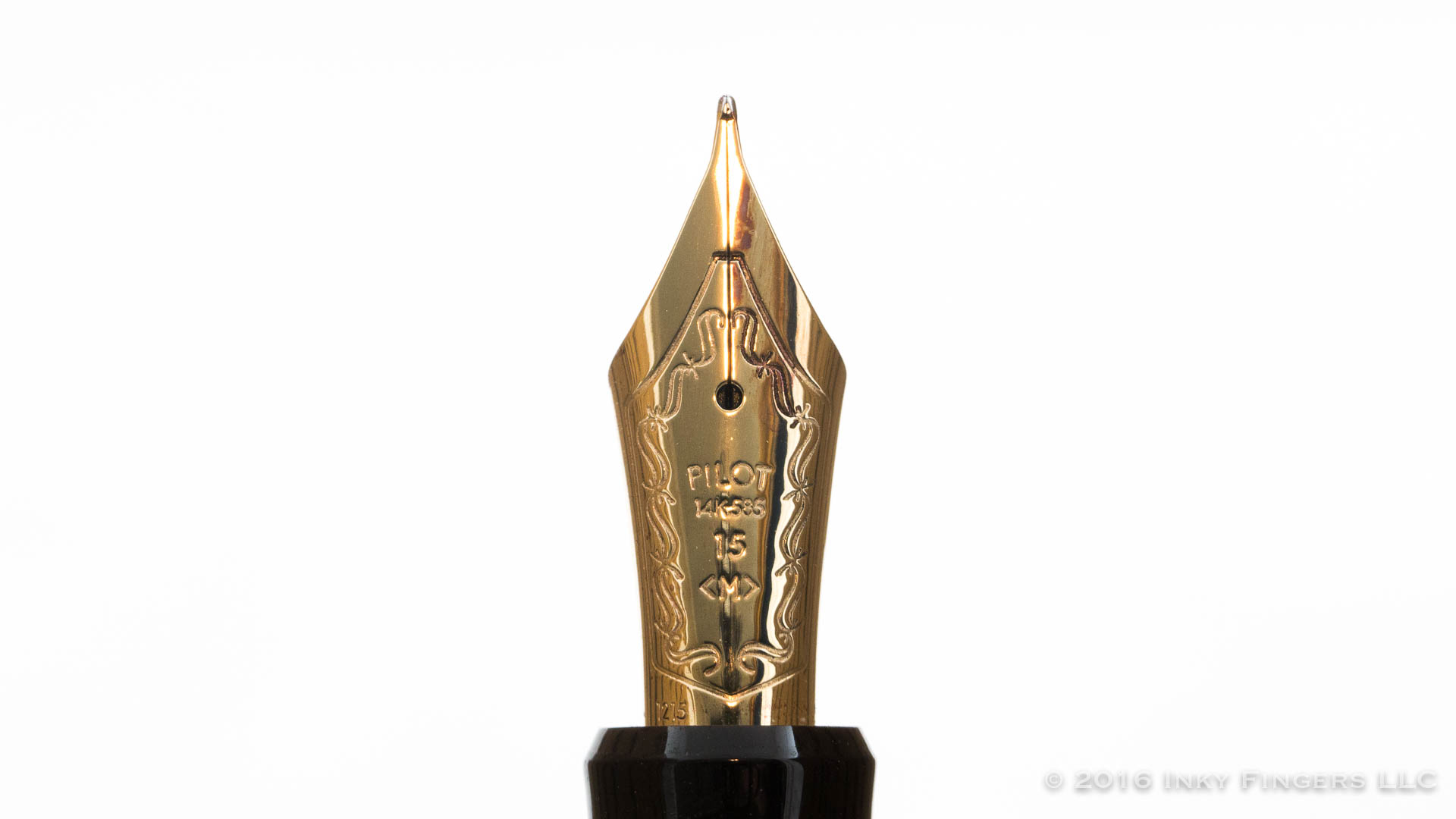 In terms of nib performance, Pilot has a history of making really consistent, solidly performing nibs. I find Pilot’s nibs to be something of a compromise between the very narrow and feedback heavy nibs from the other Japanese manufacturers like Sailor and Pilot, and the very smooth nibs from western manufacturers. Their nib gauges are a bit narrower than western nib gauges, but they don’t feel quite so narrow as other Japanese nibs. This large #15 has a slight bit of a cushioned feel to it that could in no way be mistaken for flex, but it’s just enough to keep it from feeling like a nail. The medium line is on the fine side, but the ink slow is remarkably consistent and slightly on the generous side of moderate. This is also one of the smoothest pilot nibs I’ve ever felt, with much less feedback than I generally expect from a Japanese manufacturer…even Pilot. 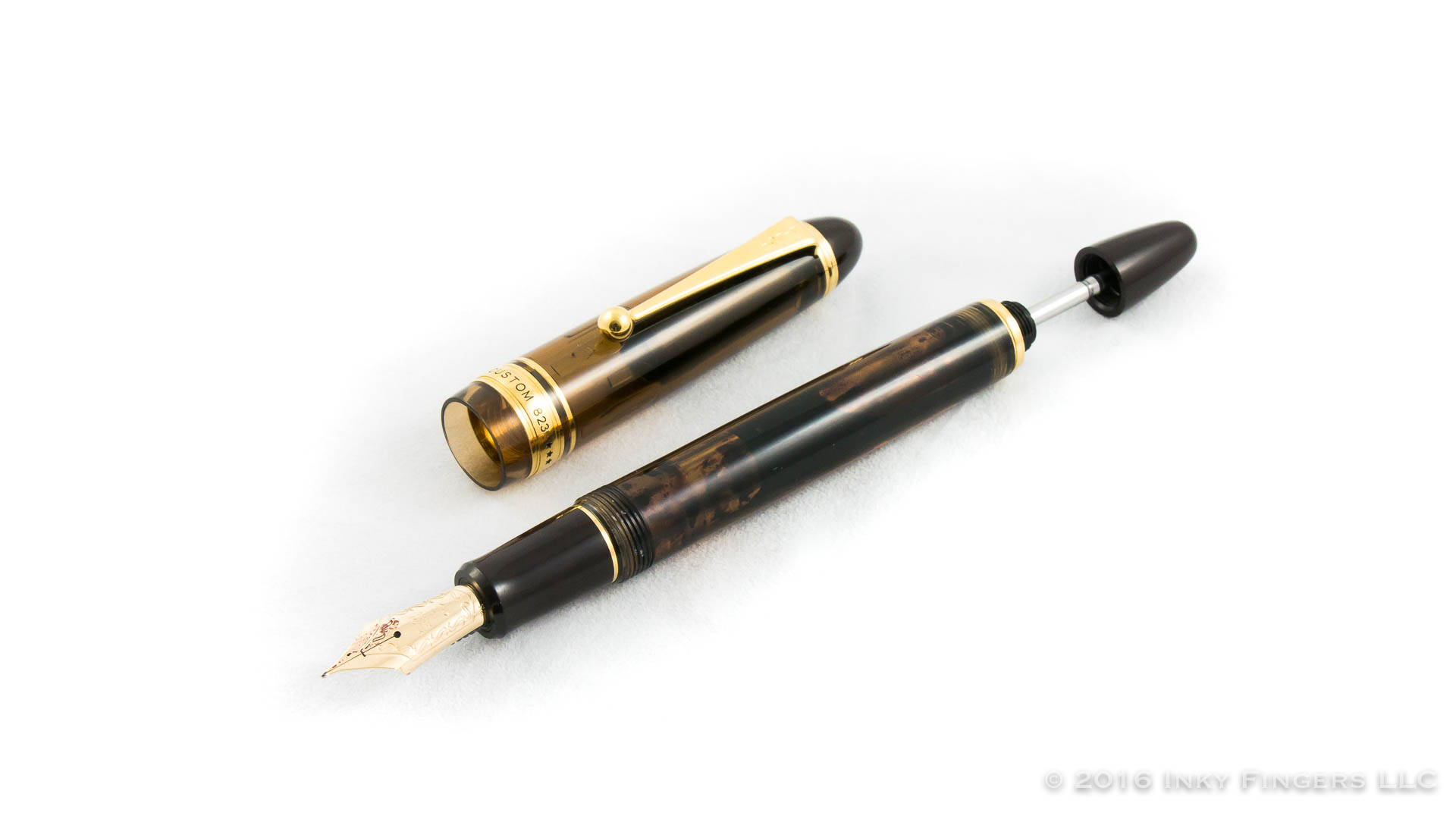 You can see this in the video, but the filling system works by unscrewing the piston knob, drawing back the piston, placing the nib and section into the ink, and then depressing the piston. The act of depressing the piston creates a vacuum behind the plunger’s rubber stopper, and when the plunger passes a specific point in the barrel where the inner walls widen out, breaking the seal, and releasing the vacuum which sucks ink up into the barrel. It’s an effective system, though a real PITA to clean, and results in a ¾ fill of the rather large barrel. (The pen’s ink capacity makes this a pen that really excels as a writer’s pen.)

One other feature of this type of filling system is the pen’s ability to “lock down” its ink reservoir. The plunger has a little conical rubber stopper on it which, when the knob is fully tightened down, blocks the ink in the main reservoir from making into the feed. This can be a real benefit from someone who travels with their pens on planes. It can also be a bit of an annoyance for people who want to do long writing sessions but don’t remember to unscrew the knob to allow the ink flow. I used to really hate this “feature,” often calling it a design mistake. These days, I’m a little less critical of it, and can see the value in it for some users. Personally, I just leave the knob lightly unscrewed all the time on my pen unless I happen to be flying with it. It saves me from constantly having to screw and unscrew the piston knob 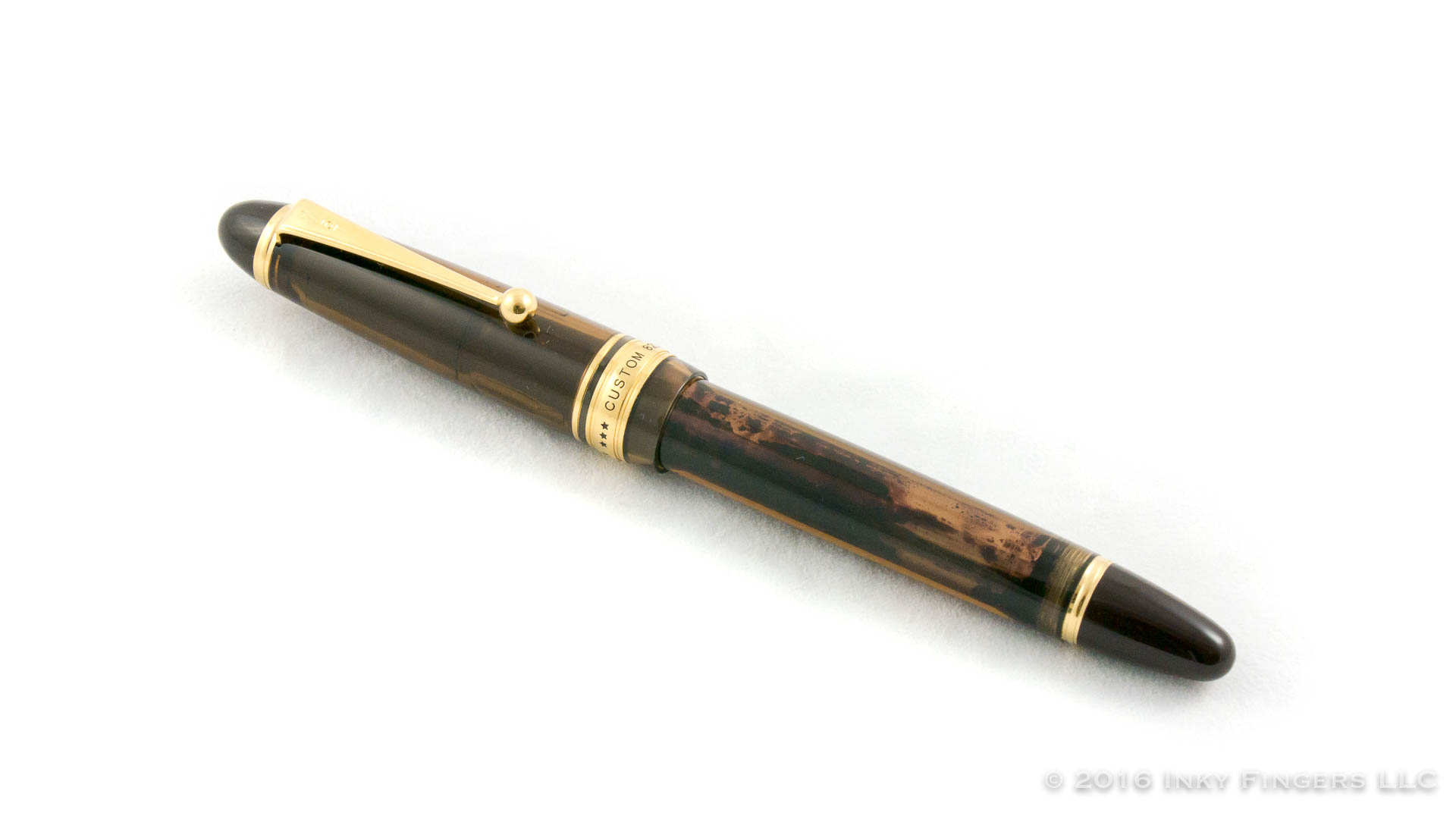 If you know me, or my preferences for pens, you’ll know that designs like this rarely “do it” for me. I can appreciate the draw of an understated design, but it’s just not what I look for when I reach for a pen. That being said, everything about the Pilot Cutom 823 is just so damn perfect, it’s hard not to fall head over heels in love with this pen. But the fact of the matter is, I love this pen.

The Custom 823 is a pen that defines what it means to be a “writer’s pen.” It is beautifully manufactured, with an attention to fit and finish upon which is simply would not be possible to improve. It is comfortable in the hand, either posted or unposted. It’s not overly large so as to turn off most writers, yet not too small to be unusable for those of us that prefer more reasonable grips. It’s heavy enough to know that you’re holding a pen, but not so heavy that it feels tiring to haul the pen across the page. It has a giant ink capacity for page after page of non-stop writing. The nib is extremely smooth and rock-solid consistent. It just feels good to write with. And it writes perfectly each and every time I put the nib to the paper.

At $288 here in the US, the Pilot Custom 823 straddles the line for me between workhorse pen and high-end pen. Pilot of Japan manufactures the 823 in additional colors, but here in the US, the amber acrylic is the only varation available. The pen can be had in those other finishes and at lower prices if purchased directly from Japanese grey market sellers rather than from authorized Pilot USA retailers, but the usual caveats about purchasing grey market items apply.  I purchased mine at full price from a US retailer, and personally find the pen to be worth every single dollar I paid. It’s a wonderful pen, and one I wouldn’t be surprised to see as a serious contender for a Season 4 Top 10 position in May.

This pen was purchased with my own funds at full retail price. No compensation was provided for this review and all opinions expressed herein are my own.