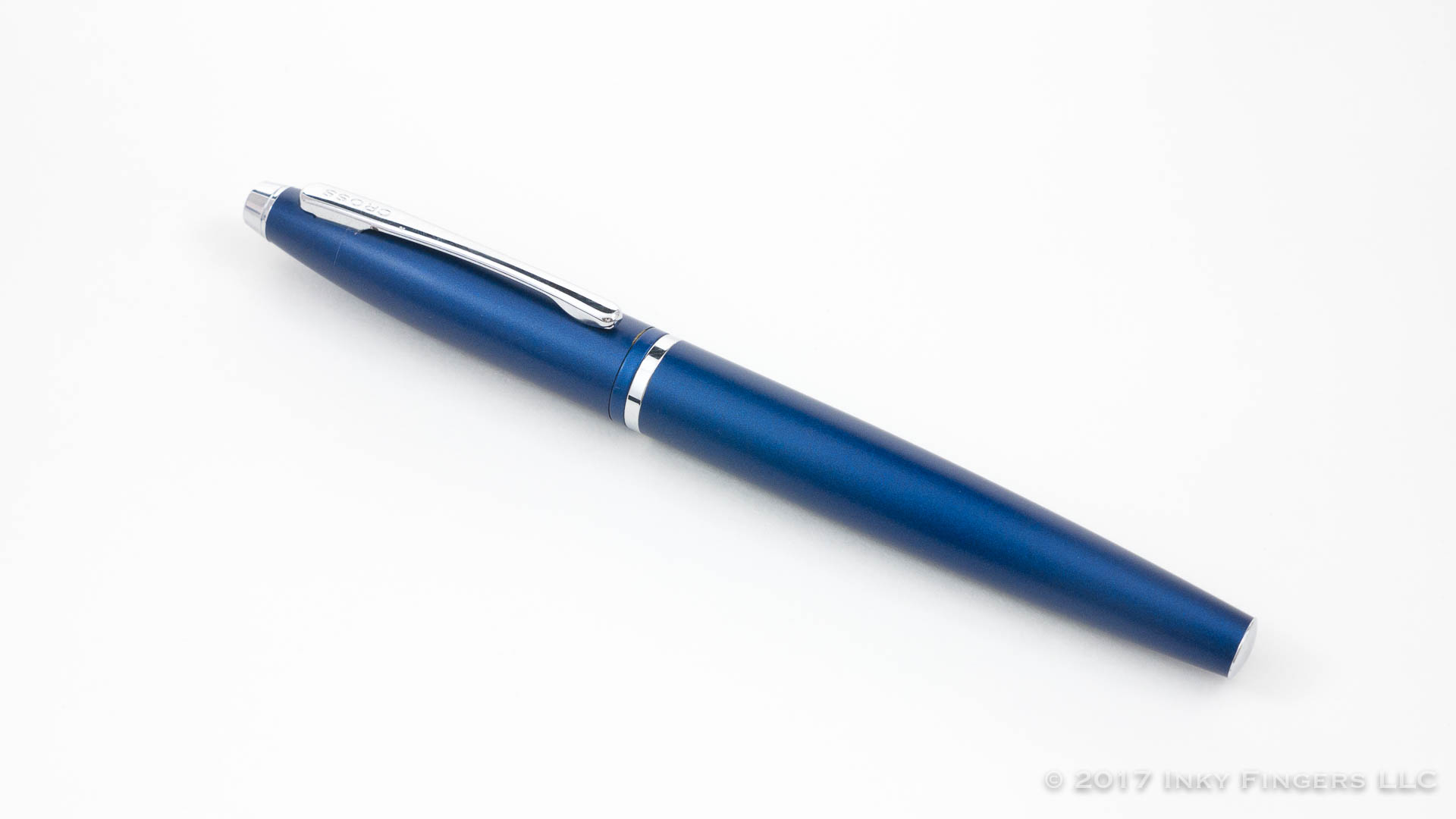 When I first started getting into the fountain pen hobby, I often found myself frustrated that I couldn’t find fountain pens locally. It was fun scouring the pen retailer websites online, but sometimes, I just wanted the immediate gratification of going to a store and purchasing a pen. But for markets without serious fountain pen retailers, oftentimes the only way to find any kind of stationery product is to traipse over to the local Staples or OfficeMax/Office Depot and peruse the pathetically paltry portfolio of pen paraphernalia. If you can find any fountain pens at all (and that’s a big if) they are usually low-cost, low-quality pens in some sort of blister pack. These are the kinds of pens that get absolutely no attention from the fountain pen community, or when they do, it is often not favorable.

But when you’re in a fountain pen desert, sometimes you’ll reach out for these inexpensive pens just to try something new. So, recently when I was purchasing a new office chair for my video studio, I happened to notice an aisle end cap with several boxed Cross pens, including a couple of varieties of fountain pens, all of which were on sale. “Why not?” I thought. So, I picked up the Cross Calais, a $20 blue pen and brought it home with me.

The Cross Calais has a pretty traditional shape, albeit one that is firmly rooted in designs from the 1970s-1990s. The brass-bodied pen won’t win any design awards, but it is covered with a lovely matte blue lacquer finish highlighted with silver-colored accents. The pen is topped off with a conical, flat-topped finial. The cap flares out down the first third of the cap and reaches a near-cylindrical shape. The clip is straightforward and is held onto the cap with bent prongs inserted into the side of the barrel. The clip has the Cross name embossed into its face near the top. 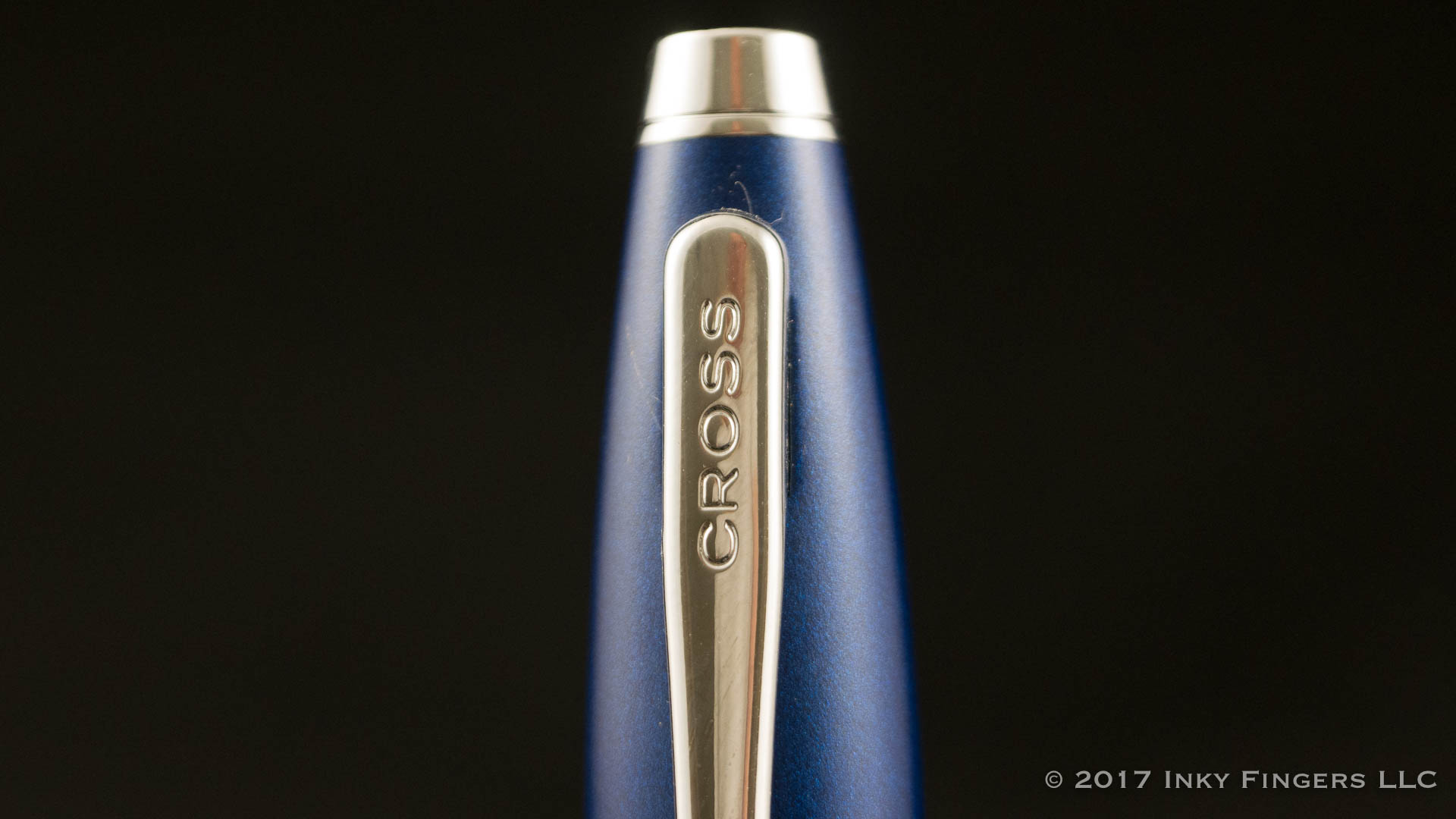 The barrel is of the same blue finish. There is a thin silver accent band just under the cap line, and a small domed silver finial at the very end of the barrel. 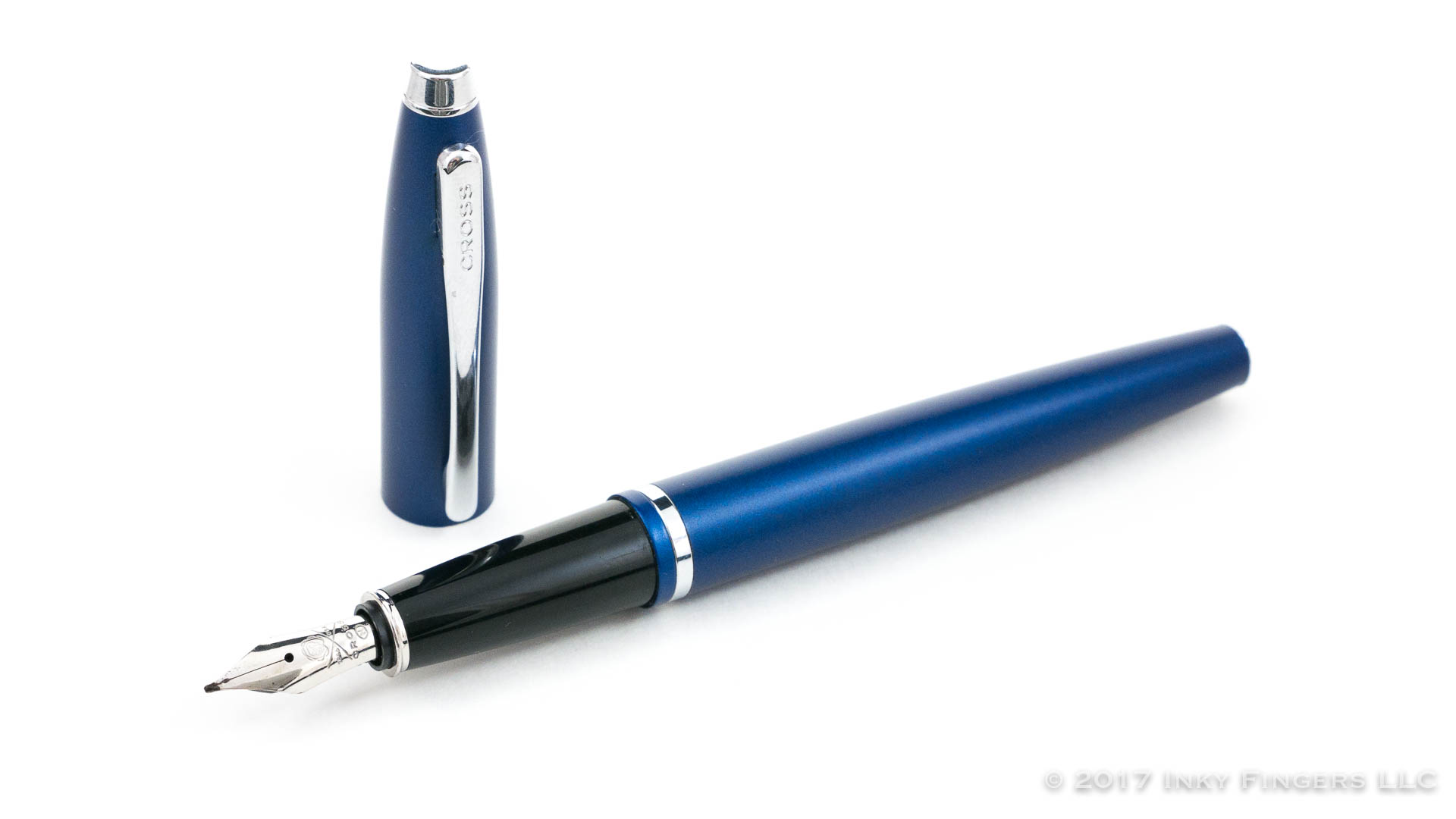 The pen has a pull-off cap that doesn’t require a whole lot of effort to remove. Under the cap is a long, black plastic section which tapers toward a very small steel nib in medium. (Medium was the only size available at the time of purchase, but I don’t know if that’s due to limitations in stock or limitations in the sizes generally available from the company.)
The section screws into the barrel, which is lined with plastic threads, provideing additional strength to the very thin metal (which I suspect is drawn and stamped rather than machined.) 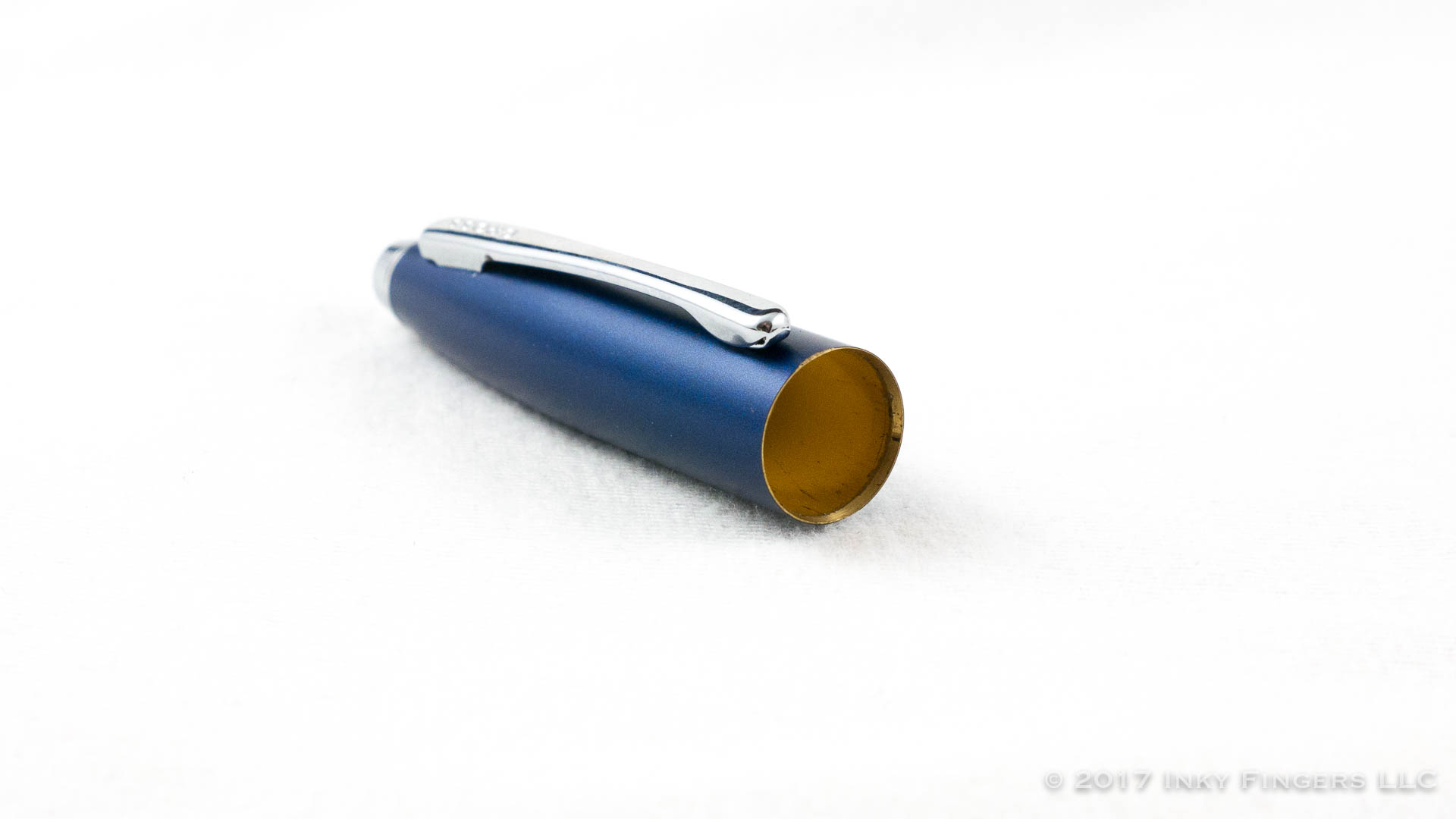 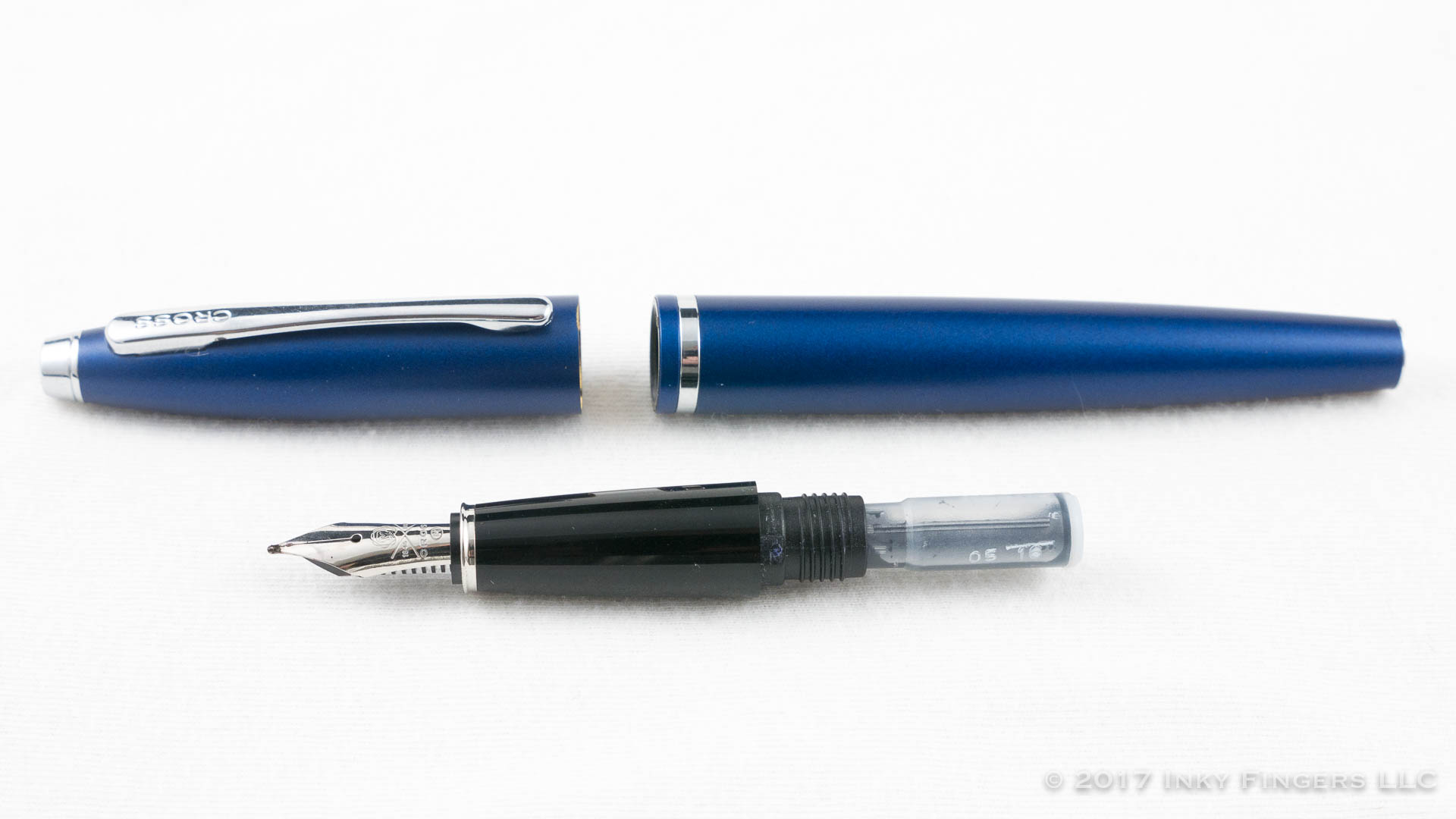 I find the construction quality of this pen to be thoroughly mediocre. The metals walls of the cap and barrel are quite thin. The finish, while attractive, is not durable. Even with my limited usage, I noticed that the finish started flaking off the brass body, especially around the edge of the cap. (This happened even with my keeping the pen in a fabric pen case almost all the time, and with relatively light use in place at a desk). The clip would be quite easy to pull right off the side of the cap. And the cap fastening mechanism feels flimsy, requires very little force to remove the cap, and feels as though it will wear out over time. 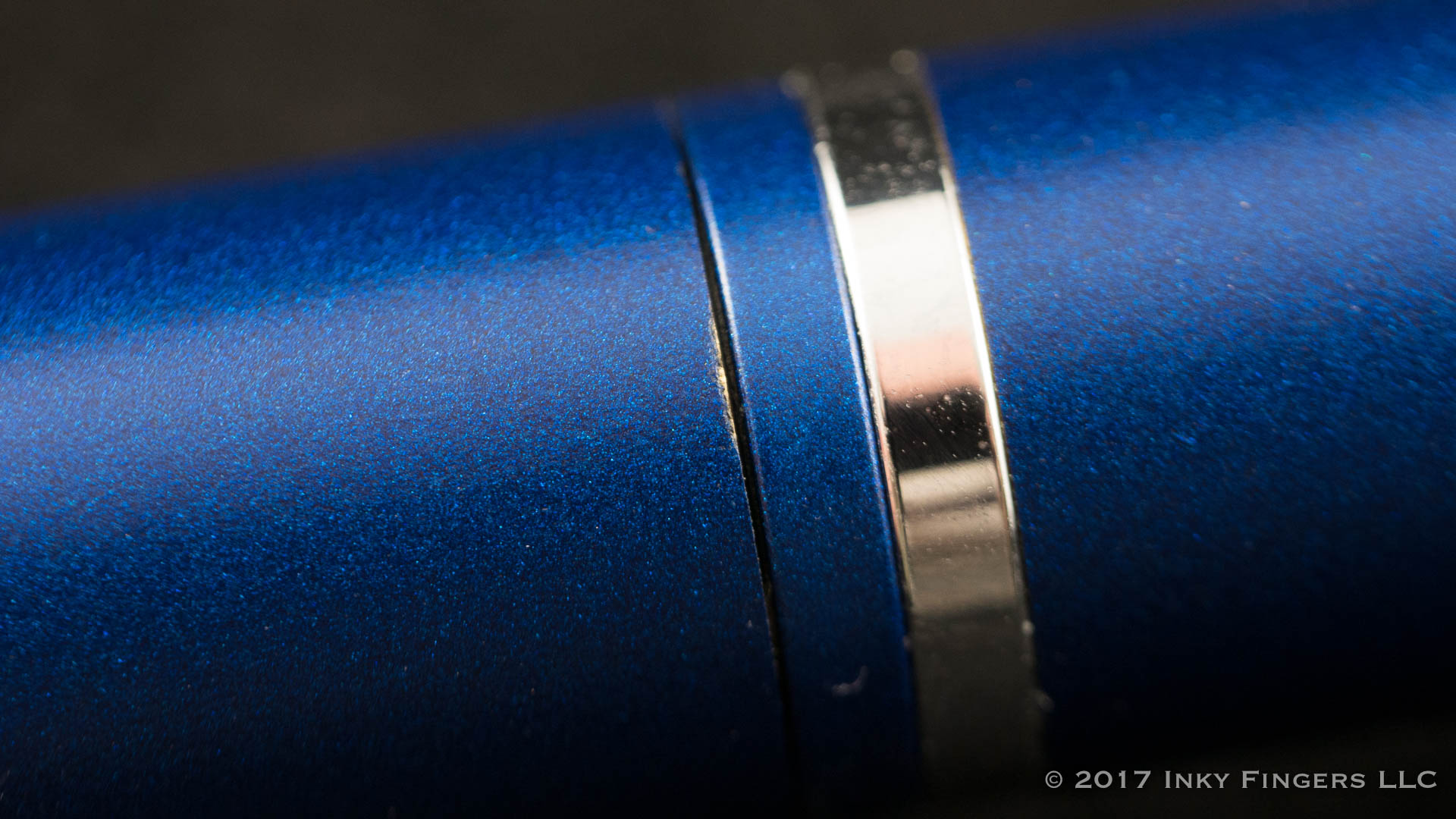 When it comes to the writing experience of the pen, though, it’s actually pretty good. The small nib is rigid but wet. It’s also pretty smooth, although it does have a moderate bit of feedback that is still pretty pleasant. It was able to keep up with long-form writing at speed, without hard starting or skipping. The pens wetness is a bit of a problem, though, not because of the wetness itself, but because the capacity of the cartridges is pretty small, and you can empty them with just a few pages of writing.

In the hand, this pen is middle-of-the-road for comfort. It’s long enough to be used without posting, which is good because it can’t be easily posted. (The cap will sit on the back of the barrel, but won’t stay in place without having to force the cap on via friction.) The pen’s section is quite long, which allows a wide variety of grips to help account for the smaller nib, but it remains a bit thin for my tastes. Despite being a metal pen, the thin walls makes it feel lightweight.

At a list price of $55 (and a clearance price of $20) the Cross Calais hovers around that $50 price barrier that many first-time pen users have.  It’s a decent pen that provides a pretty good writing experience. However, when placed against other well-known pens in this price range (Pilot Metropolitan, Lamy Safari, TWSBI Eco, Faber-Castell Loom) the Cross Calais suffers in the comparison. The manufacturing quality just is not as high. It’s a good writer, but in light of the proprietary cartridges with meager capacity, the lack of included converter, and a higher price, this is not a pen that I could recommend to any but the curious.

The pen for this review was purchased with my own funds. All opinions expressed herein are my own.