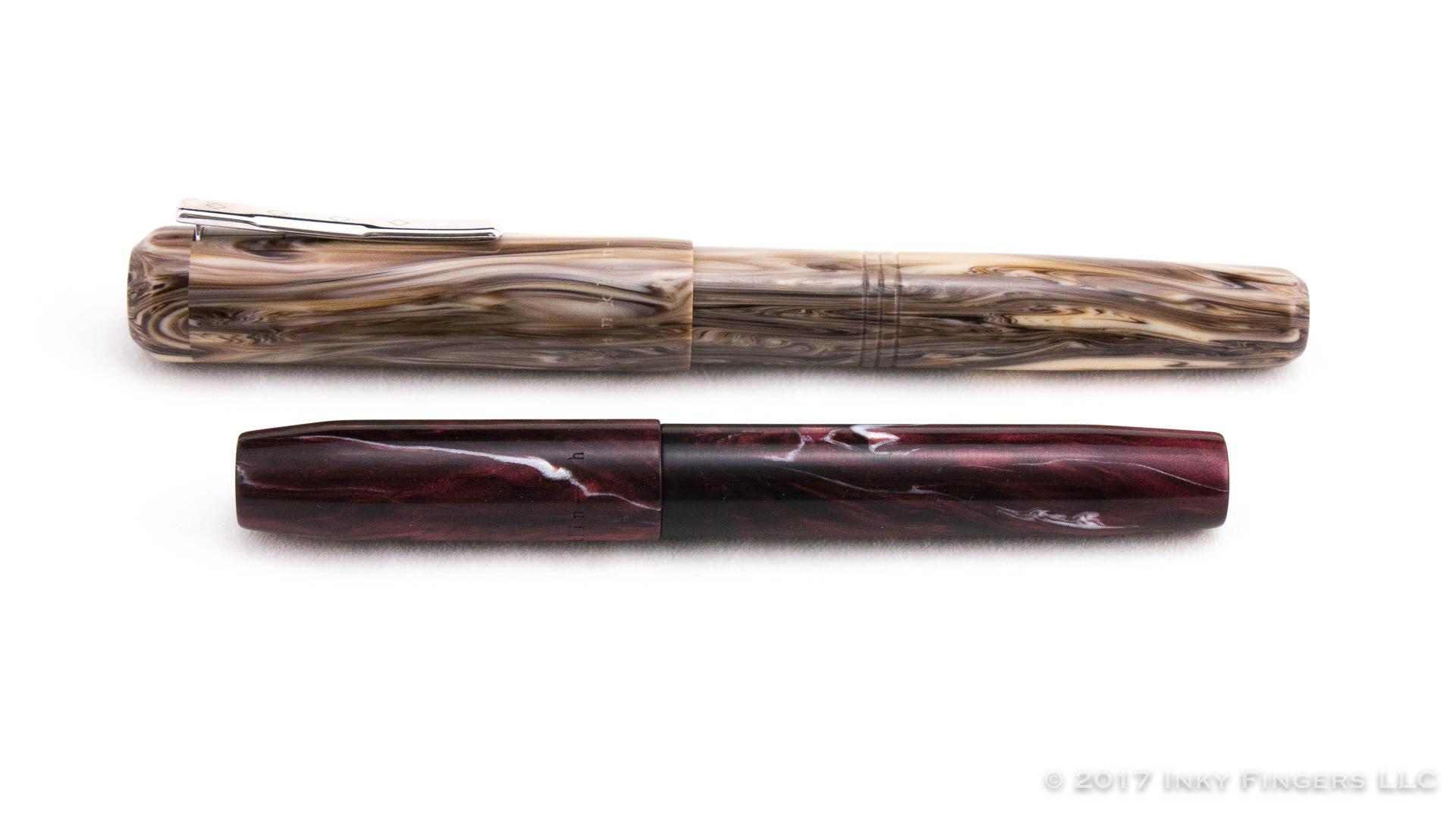 Friday dawned windy, overcast, and cold. Or so I heard. I couldn’t tell because I didn’t leave the hotel for the first time until almost 1PM. I picked up a nice latte at the coffee bar in the hotel atrium and had one of the worst lemon poppy seed muffins I’ve ever tried to eat in my life. (The pastries at the coffee bar were about 12 levels of pathetic.) As soon as the ballroom doors opened at 8AM, I wheeled in the cart of pens that we’d left in my room overnight for safekeeping, and started setting up for the day.

As I mentioned in Part 1 of my pen show journal, each show has its own personality, based on a variety of factors. One of the most important is when the show is open to the public. The Chicago show is open to traders on Friday starting at 8AM, and open to the public starting at noon. With only traders there for the first four hours of the day, the show was slow, with short spurts of foot traffic here and there, mainly from the die-hard pen people who traveled a long distance to attend the show. (Side note: It’s a little weird that I’m one of the die-hard pen people. I never imagined I would be the type of person who flies across the country to play with pens and ink.)

With the show traffic on Friday morning a bit light, I had some time to do my own circuit of the show floor. I decided to start my rounds by picking up some of the exclusive inks that were brought out for the show. The Chicago Pen Show organizers had worked with Konrad at KWZ ink to have a show-exclusive cobalt blue ink made called Chicago Blue. I picked up two bottles, sight unseen, because you know I’m a sucker for limited editions. Turns out, it’s quite a lovely darker blue ink. (See @leighpod’s photo linked above.) On a related note, The Vanness Pen Company picked up a large quantity of the remaining stock of the Chicago Blue on Sunday after the show was over, and it’s now available on their website.)

I also stopped by the table of the New Orleans pen store, Papier Plume, and bought one bottle of each of the new inks they unveiled at the show: dating site for vegans. I’ve not opened either one of the bottles yet (more on why later) but I’m looking forward to getting to know those inks.

After that, I decided to meander my way over to the dating a codependent man Table. Now, I know better than to get in the way of the F-C diehards who hover at the table first thing in the morning, hoping to swoop down and snatch up the color prototypes that get unveiled each morning. But by the time I made it to their table, things had slowed down and I was able to pick through the remaining prototype options.

It had been a while since I had picked up a Franklin-Christoph, and since I live about 15 minutes away from one of the world’s most prolific Franklin-Christoph collectors, I have had the opportunity to try a LOT of them in the meantime. While not generally a fan of pocket pens, I really enjoy their Model 45 pocket pen. It’s very small, but quite comfortable in the hand when posted. I had decided I wanted to pick up a 45 to review, so I went after one of the color prototypes, a pen made from a Jonathan Brooks material (I think…nobody could/would confirm it for me) that I’m calling “Cherry Cola.”

I also decided to pick up a Model 31–a model of pen I’m largely unfamiliar with–in a lovely, swirly acrylic that I’m calling “Cappuccino Swirl.” (Please note, these are not official names, which I’m not sure F-C gives to its color prototypes. So I just named it myself!)

One of the other big reasons I decided to pick up a couple of Franklin-Christoph lovelies is that I wanted to get my hands on a SIG nib. This is a nib grind that was invented by Franklin-Christoph’s in-house nibmeister extraordinaire, Jim Rouse. SIG stands for Stub-Italic-Gradient. I had a chance to use a couple of SIG nibs at our local pen meetups and was blown away by them. I’ve made no secret of the fact that I struggle with flat nibs. There’s something about the SIG, though, that seems to eliminate the issues I tend to have. They’re smooth and wet, and give my writing just a hint of interesting line variation that I don’t normally get because I tend to stick with round nibs.  In my Model 31, I got a fine SIG nib in 14k gold. In my Model 45, which uses a smaller, #5-sized nib, I went with a steel medium SIG. (Jim suggested that the steel #5 nibs are better nibs than the gold #5 nibs, especially for grinds like the SIG. Considering he’s the expert, I’m happy to trust his analysis.) The resulting nibs are both wonderful, and I’ve been using them ever since.

F-C fills their pens with the ink of your choice when you purchase one at a show, so I had them eyedropper the 45 and use the converter on the 31, filling both with Spanish Blue. It’s one of their colors I don’t have, and I wanted to get to know it a little better. I also bought a bottle of their Urushi Red, which I’ve used and like a lot, and a bottle of Sweet Maroon, which I haven’t used, but like the color.

That was it for my first-day purchases. I had decided that I was going to implement my “wait-and-see” tactic for any additional purchases. As I meandered around the show for, I started a mental short list of pens in which I was interested. My theory was that I would make the rounds again on Sunday. If the pens were still there, then I would buy them (and maybe at a discount because it was the last day of the show.) If they weren’t, then it just wasn’t meant to be.

Around noon, I ran out to Pita Pita to grab lunch for our little group of worker bees. I returned to the show shortly after the public hours began. By Friday afternoon, the show’s traffic had picked up quite a bit, and we started to get busy. The Vannesses always bring a metric butt-ton of ink, including a lot of brands that aren’t readily available, so when we work at the table, we spend a lot of time helping people pick out ink colors in brands they may not be familiar with. It’s always a lot of fun helping people find inks that match their own personal preferences. One of my favorite things is when we help someone pick out a color and they come back a couple of hours later saying, “I just went and inked up a pen with that ink you sold me, and it’s my new favorite. It’s perfect!”

The public hours on Friday wound down at 5:30, and we had about 30 minutes to pack up the table, get everything covered and GET OUT so they could lock the doors.

Once the show floor was locked up and the pens secured up in my room, Brad, Ana, Lisa, and I joined Bryan and Cary from Kenro Industries for dinner at the Eagle Stone tavern in the shopping center next to the hotel. The food was good and there was a lot of it. We all ate to the point of sickness, and laughed, and talked, and pontificated about the state of pen shows and the industry in general. With three bloggers all at the same table, we got into a conversation about our chosen avenues of content creation (podcast, written posts, YouTube videos, etc.) and about some of the tools we don’t like using. (Snapchat was pretty high among that list.) I always love getting together with my fellow content creators, because I always get ideas and get inspired to go back and do something new and different. This dinner planted a couple of interesting ideas that are going to be coming down the pike pretty soon!

We eventually we headed back to the hotel (and the bar) where I spent the remainder of my evening sipping lovely beverages and having very stimulating conversations with some of the new friends I had met at the pen show, as well as some old friends I had met at previous shows. The bar scene at a pen show is about the only bar scene I can stand, and this one was fun.