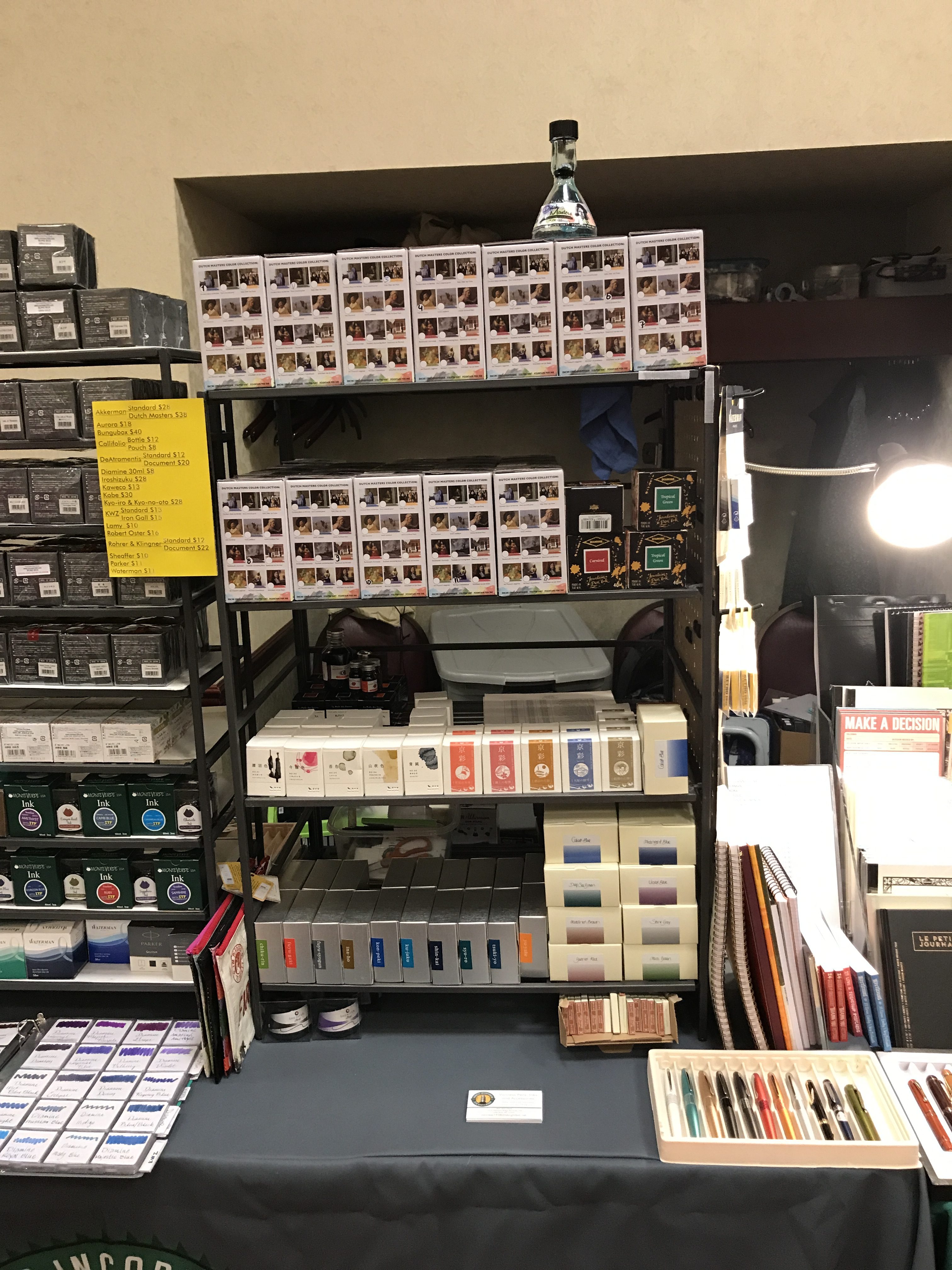 Attending a Pen Show may sound like it’s all fun and games (and it is those things,  else wise why would we go?), but it is also exhausting. This is especially so if you’re going to work the show as a busy vendor. For my day job, I sit on my (rapidly expanding) butt all day long and type into a computer. I’m not used to standing on my feet for 10 hours straight and talking loudly over the buzz of a large hotel ballroom. I usually leave a pen show hoarse, with sore feet, and in desperate need of an appointment with my chiropractor.

After the first full day of a show on Friday, I was knackered. As the alarm went off Saturday morning, I awoke with a groan that carried the weight of the world, and a few expletives that shall not be repeated in this forum. (Expletives, I might add, which continued unabated as I got out of bed and my body started to scream at me in protest. “GO BACK TO BED YOU IDIOT!” it said.)

Cleaned up and only partially awake, I stumbled my way down to the lobby. I was slightly nauseated from overdoing it at the bar the night before. I almost never drink, so when I do, I’m a real lightweight. I decided that a full breakfast was in order, especially as I suspected Saturday would prove to be significantly busier than Friday. I plunked myself down in the hotel restaurant and ordered a big “All-American Breakfast” to start my day. After I finished gorging, I heard through the grapevine that Lisa Vanness had experienced an allergic reaction to her feather pillow during the night, and so while she sorted out antihistamines, I set up the table for the day when the doors opened at 8AM.

Saturday at the Chicago show, much like at the DC and San Fran Shows, is the big public day.  It was busy from about 8:30 onward, and it didn’t stop all day long. I ran to grab us sandwiches from Which Wich in the shopping center around 1 PM. Aside from that, I was working all day. I met a lot of cool people, we sold a lot of pens and ink, laughed a lot, and generally had a grand old time. Working is always better if you can do it with good friends.

Again, the show started to wind down around 5:30, and we packed up the table for the night. There was a Pen Addict / Kenro gathering at the bar later in the night, so we went over to the nearby Red Robin (Yummmmmmm) for a quick dinner. Red Robin is a Seattle-based chain, but none of my dinner companions had one near them, so I considered it my duty to introduce them all to the stack of deep-fried deliciousness that is Red Robin’s Towering “D’oh!” Rings. Croissant dough, cut into rings and deep fried, tossed with cinnamon sugar, and served with chocolate and strawberry dipping sauces. Oh yeah. (Also, see above “rapidly expanding” butt.)

After dinner, we returned to the bar, where we were joined by 50 or 60 folks for the Pen Addict meetup. Several bloggers and retailers donated prizes for the giveaway, including a slew of Game of Thrones-inspired chalices, some ink, a few Col-o-Rings, and more. Then, plied with gifts and alcohol, we each migrated to our various corners of the bar to laugh, socialize, and again, play pens.

This night, I found myself chatting with Mike Matteson of the Inkdependence blog and YouTube channel, who was at the show working the Franklin-Christoph table with his wife, Audrey (who runs a fingernail polish blog of her own), and the aforementioned Jim Rouse. I have had Mike on Currently Inked before, and he’s always a delight. But despite our having attended a few shows at the same time, we hadn’t really ever had a chance to just sit and chat. I hadn’t realized how much of a dark, sarcastic sense of humor we shared until that night, as we had about an hour and a half of running commentary, laughter, and snotty remarks. He’s good people.

Finally, as the clock ticked toward midnight, and conversation turned philosophical, I realized I was far too buzzed to keep up with the conversation any longer, and headed back to bed, prepared for the final day of the show.