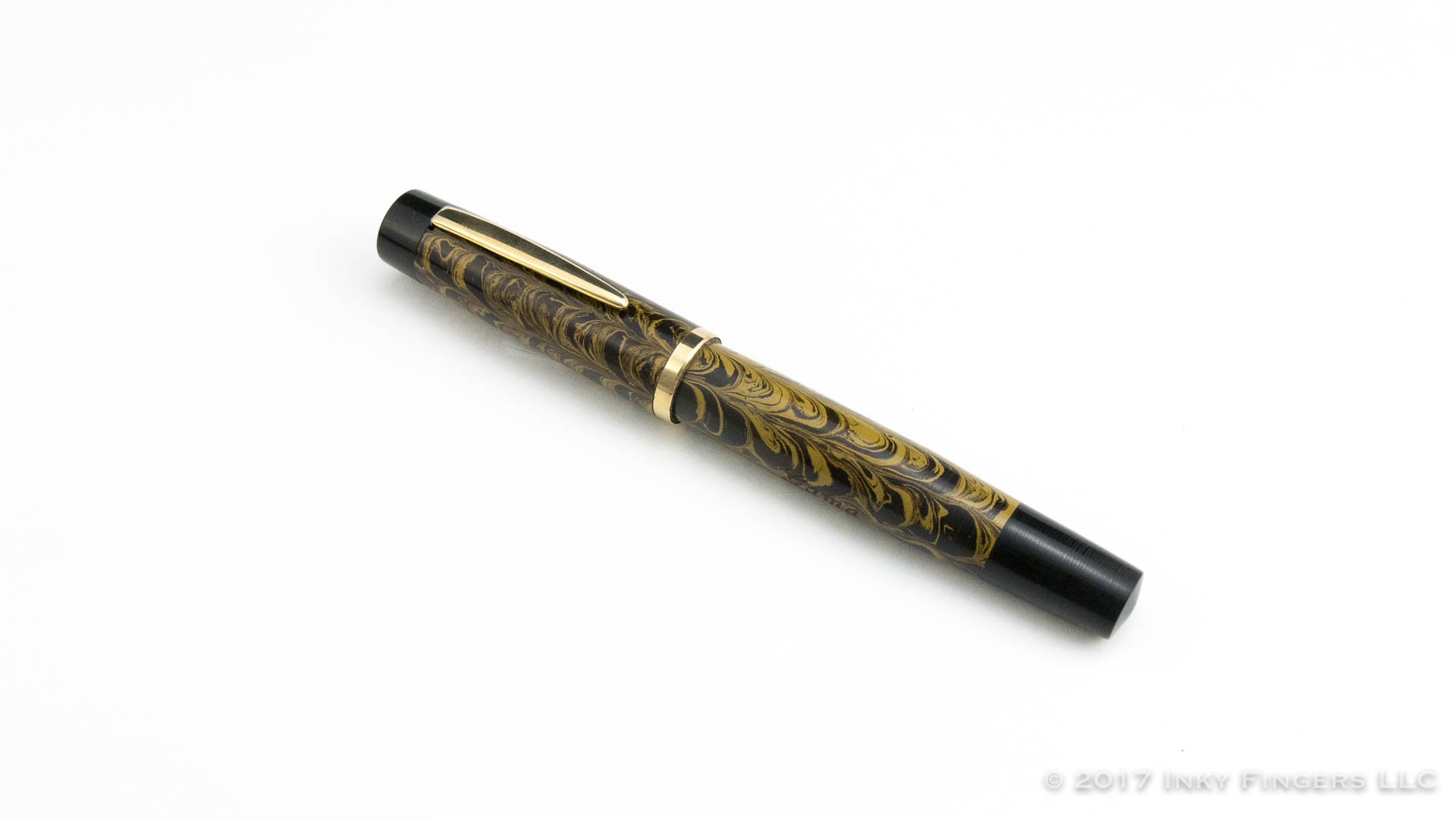 I have made no secret of the fact that I enjoy a good oversized pen. Most of my favorites fall into the “large” pen category. But, as though in an attempt to prove there can be too much of a good thing, the folks at Gama Pens created the Supreme. Gama is the in-house brand of Gem & Co., a pen retail in India that has been around since the 1920s.  The Gama Supreme is, as the name might suggest, an absolutely mammoth pen made of a lovely olive ripple ebonite with black ebonite finials.

The basic shape of the Supreme is vaguely reminiscent of some of the early Parker Duofolds, I think. The clip is a streamlined design with gold plating. The cap itself is banded with a ring of gold-plated metal as well, which is a feature you don’t see on a lot of ebonite pens made these days…especially those from India.

In reality, though, the design of this pen hardly matters, as the single most eye-catching thing about the pen is its absolutely insane size. 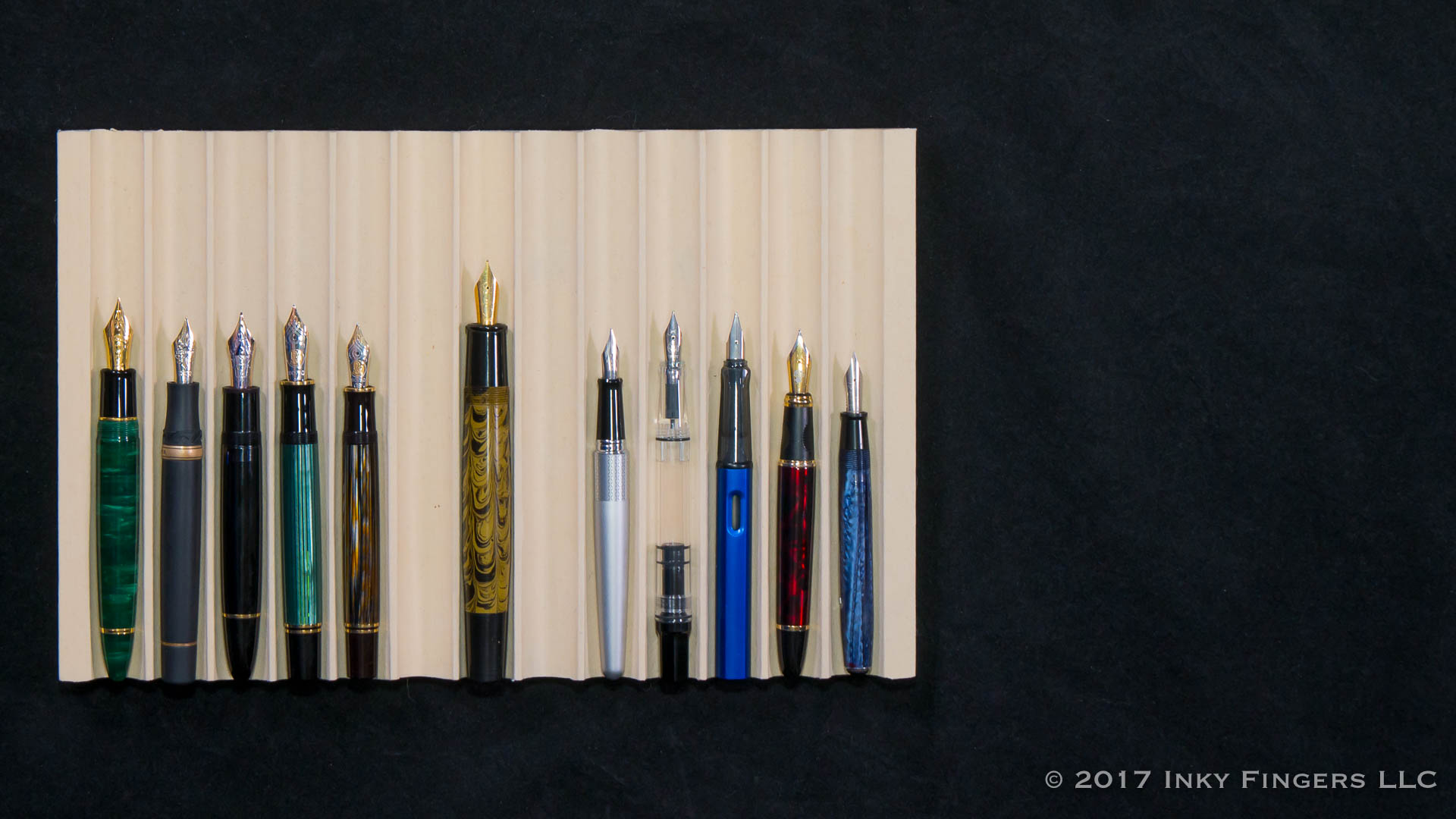 With a section diameter of between 14-16mm, this is not a pen for the faint of heart of small of finger. The ebonite section is nicely contoured, however. This is a pen that might be an excellent choice for those suffering from arthritis or issues holding smaller pens due to loss of finger strength. The grip of the section is so girthy, you could almost grasp the pen in your fist and have it be the right diameter. Despite the pen’s larger size, the lighter ebonite material still makes it relatively lightweight. 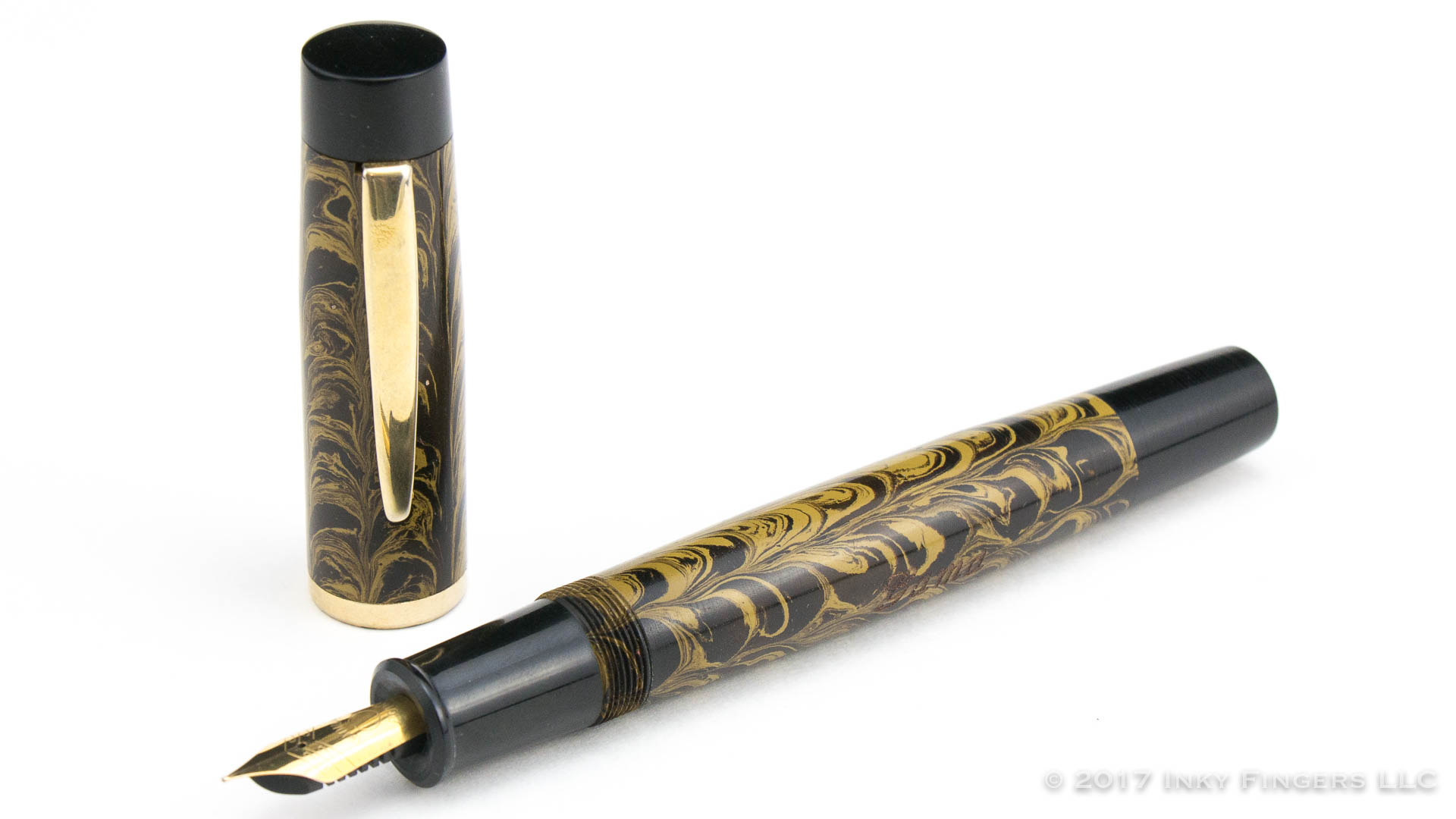 This pen can only be filled via the eyedropper method, and there are currently no options for other filling systems. The pen’s large size means, of course, a large capacity of ink. My first fill of the pen came up somewhere between 4 and 5 milliliters of ink. 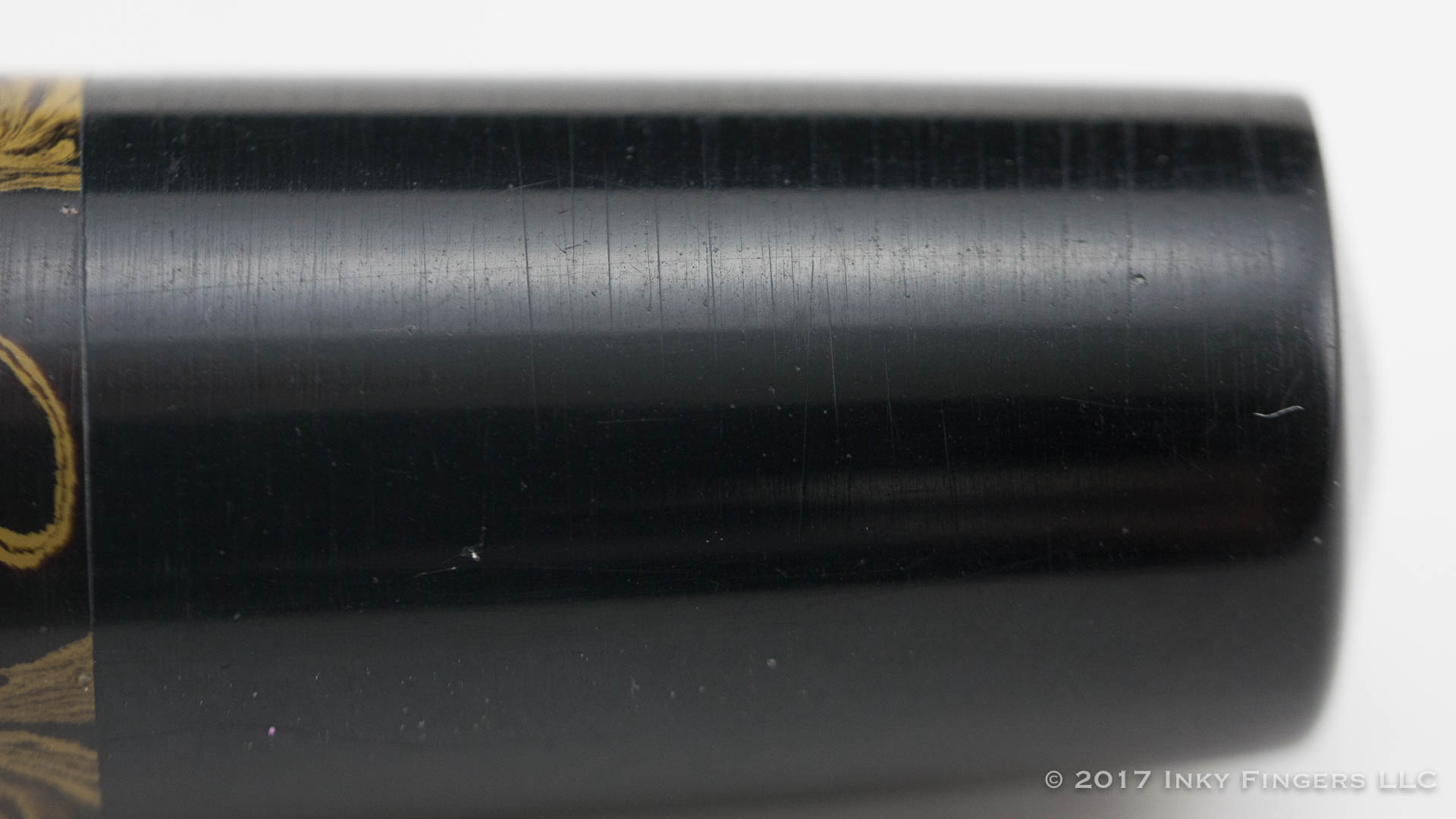 The Gama Supreme is a handmade product, so there will be slight variations from pen to pen in terms of size. It is also a relatively inexpensive product. Overall, the build quality is solid, if rather unrefined. The pen feels solidly put together, and robust in the hand. However, the joins between parts are not well-matched, and the pen’s surface still shows a lot of marks of the original tooling processes. The entire pen could have used with a fair bit more sanding and polishing. The overall quality of the ebonite is also a bit lackluster, containing pits and inclusions that mar the finish somewhat. 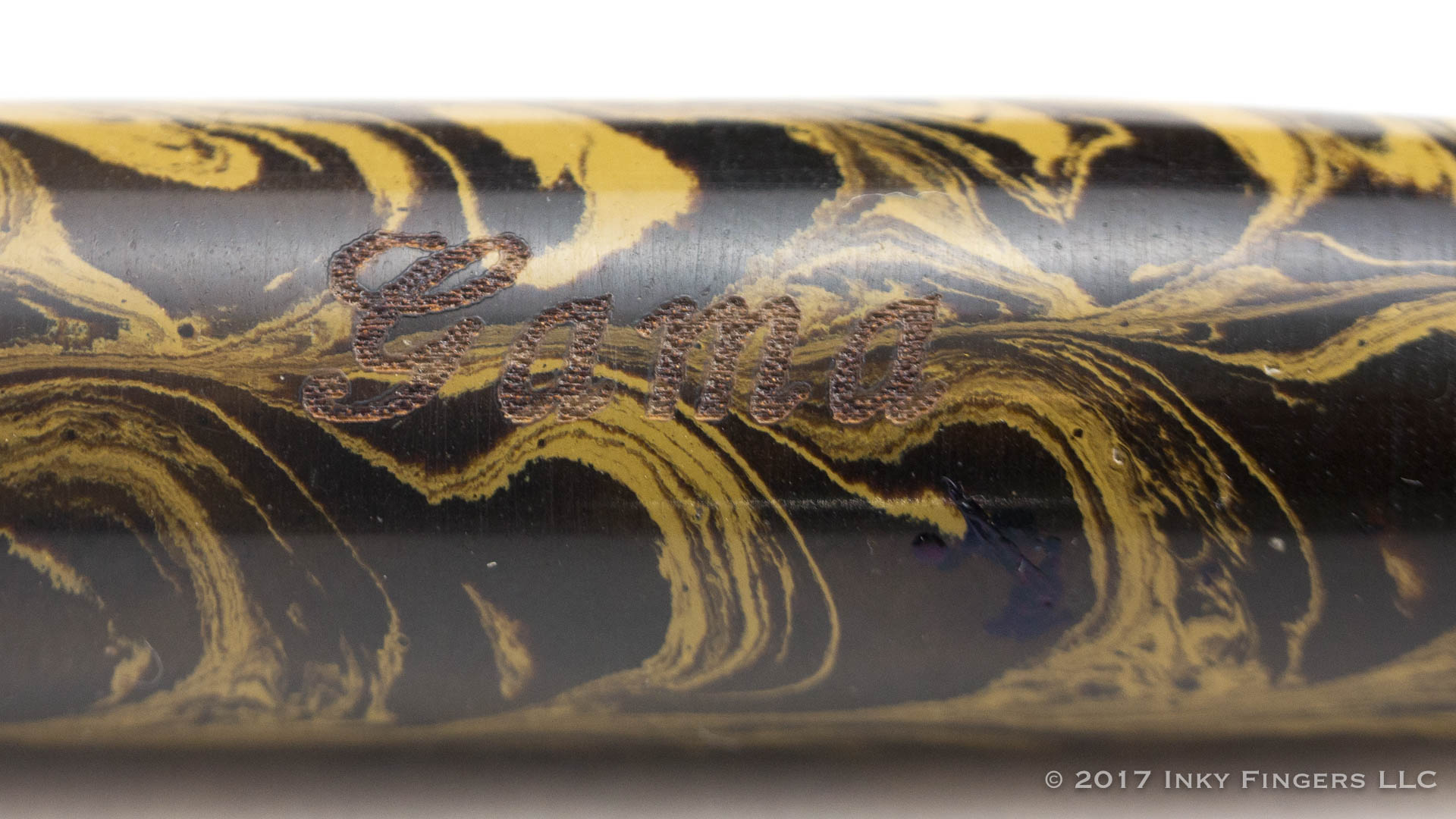 My Gama Supreme also has an odd ink(?) stain on the barrel of the pen (the blue stain under the final ‘a’ in the engraved name) that I was unable to remove from the pen. 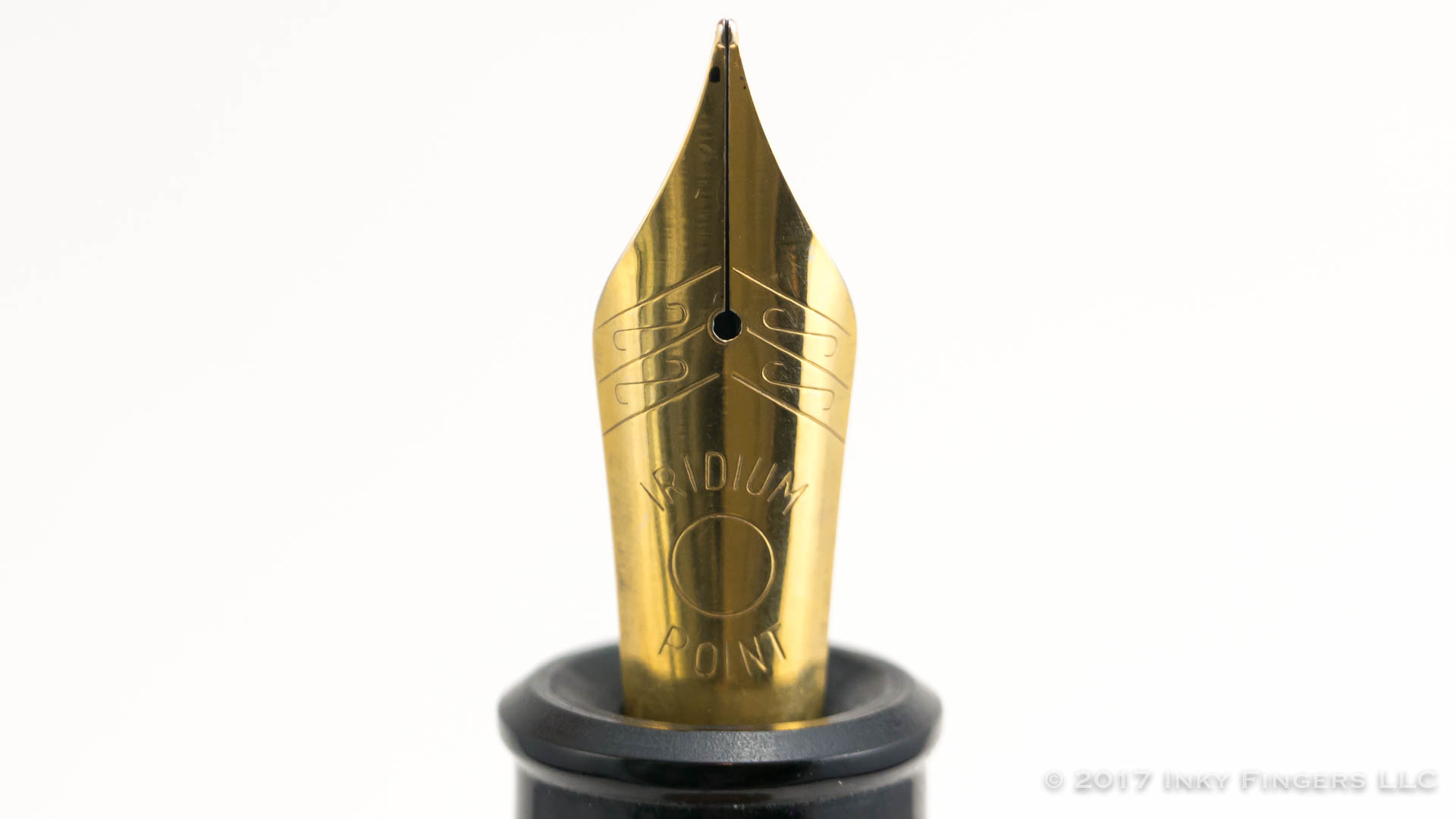 The Gama Supreme comes with what the AsaPens.in website calls a #10 nib*. I suspect they are using a different numbering system than the more traditional European system (#5, #6, etc). The nib is similar in size to a #6, but perhaps a touch larger. The gold-plated steel nib is stamped with the words “iridium point,” and is not marked with any designation of nib gauge. If I had to place a gauge on the nib, I’d call it a slightly narrow medium. 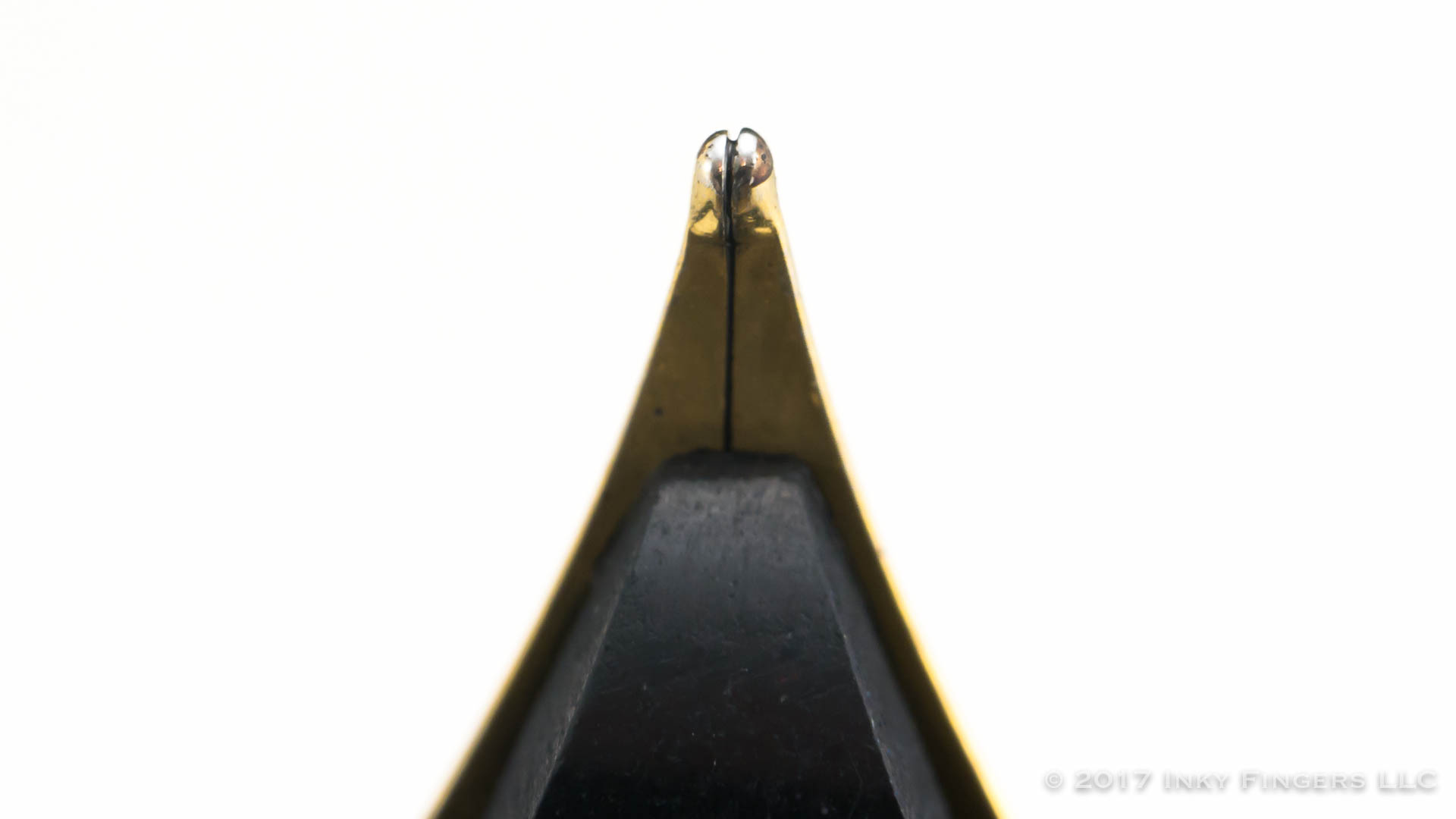 I have, in the past, complained about the overall quality of the nibs I find in most of the inexpensive Indian pens I have purchased thus far. I was really hoping to feel differently about the nib on this particular pen. Unfortunately, the lack of attention to detail that detracts from the pen’s fit and finish also reared its head with the nib. After the slit is cut on a nib, the nib manufacturer normally has to do a bit of work to bring the tines together toward the tip of the nib to assist with capillary action. It appears as though that step was completely ignored on this nib; when I got the pen, the tines were in alignment and were decently polished, but the nib slit was entirely parallel from tip to breather hole instead of tapering toward the tip as it should. As a result, the pen simply would not write. I couldn’t get the ink to flow at all.

I was able to do a bit of adjustment work to bring the tines back together and re-aligned the nib as a result of that work, and then the pen wrote fine. Since then, I haven’t had any problems with it, and it’s been a good (and consistent) writer. It only took me about 2 minutes of work to get the nib writing; with such a small investment of time, you’d think that this is the sort of work that either the manufacturer or the retailer would want to do before sending out the pen if for no other reason than that it makes a good first impression.

As I often say to my pens (yes, I talk to my pens…don’t pretend like you don’t too), “You have one job. To write. If you can’t do at least that much, I’ve got no use for you.” Fortunately, it’s writing now, and writing well. But if you’re not as comfortable with adjusting nibs as I am, you might end up disappointed by the out-of-the-box writing experience. (Which is a funny phrase, because this pen doesn’t come in a box.) 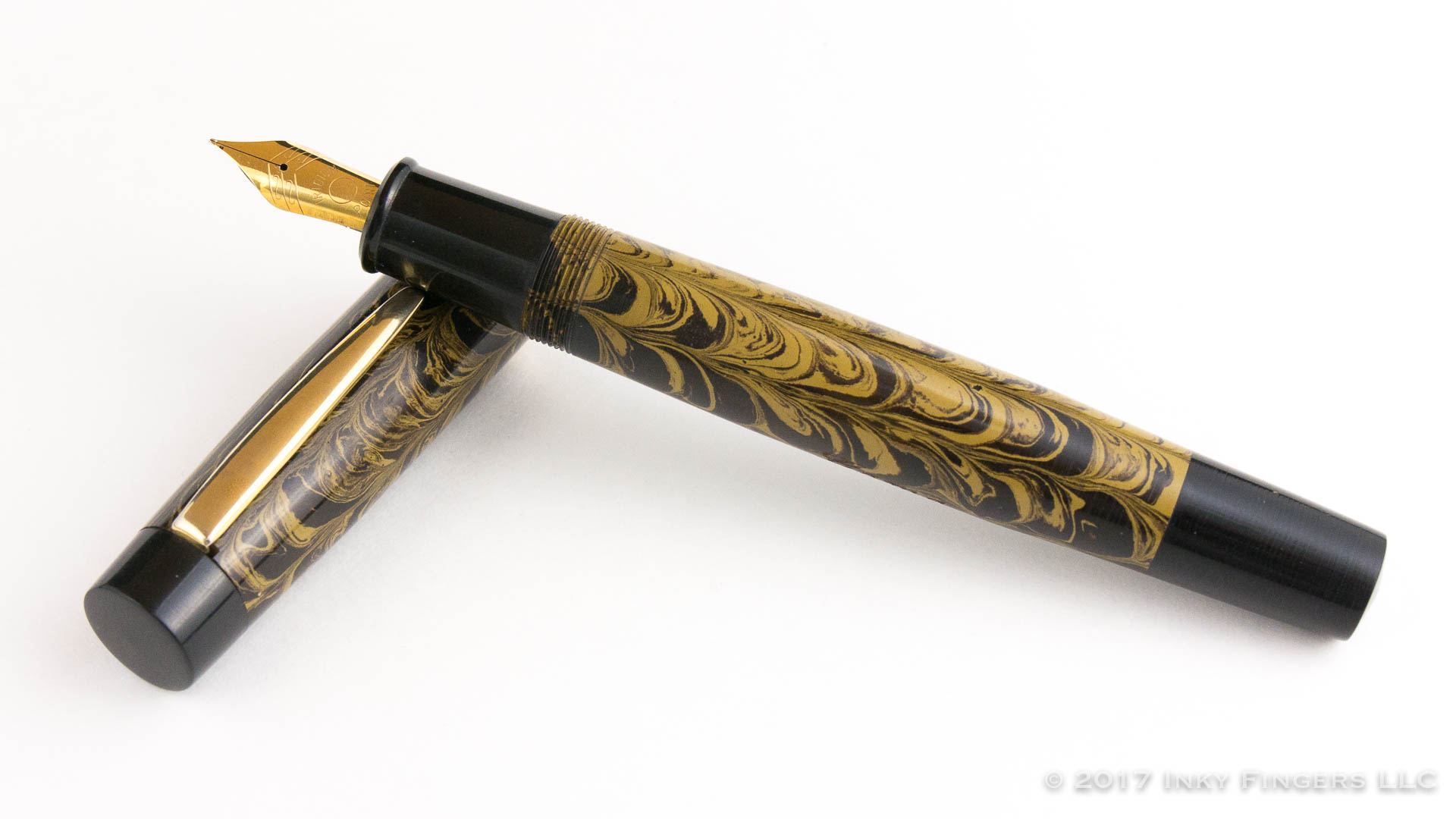 The main saving grace for the Gama Supreme, despite its problems, is its price. The pen retails on the oasis free dating website for only $42. For a large, handmade, ebonite pens with a massive ink capacity, that’s actually quite a good price. If you get one that writes well out of the box, all the better.

In the end, the Gama Supreme isn’t a pen that I can recommend without reservation for all users. It’s going to be too large for most people to use comfortably. For those who expect perfection in the fit and finish of their pen, this won’t be a good choice either. And, of course, the inconsistency of the nib is unfortunate. That being said, I can still recommend the pen with reservations. I’ve never really come across anything quite like it, and never at this price point. It’s a fun pen to play around with (and it gets a lot of attention and pen shows when you plunk it down on the table.) And at such an affordable price point, it’s a great option for a pen where you could feel comfortable refining your pen adjustment skills. If you can get it writing, you’ll end up with a rather nice pen.

Note: At the time of this writing, men seeking men was out of the Gama Supreme. You may still be able to find it from other retailers, or you can reach out to men seeking men and ask them about when they might expect to get additional stock of the pen.

* Reader/view Hans reached out to me after this review was published with some additional information about the nib on this pen that I found quite interesting. Hans wrote:

Indian № 10 nibs are about 35 mm long and are curved for 6.35 mm (0.25 in) diameter feeds. Visually they are essentially #6 nibs There are also about 40 mm long № 12 nibs curved for these feeds. The big № 12 nibs visually are essentially #8 nibs. The very simple ebonite feed of the Supreme is 51 mm (2 in) long and has a very deep and wide ink channel that dwarfs the tiny channels used in modern polymer feeds. It provides ample ink flow and enough length to also work with № 12 nib setups, that have the feed 5 mm further out than in your setup.

I recognized the nib in your pen as a gold-plated № 10 made by Ambitious India based in New Delhi, see http://ambitiousindia.com. They cost about USD 3 and come in several variants. These nibs are made from thicker sheet metal than the OEM nib Gama provided to me or JoWo nibs. Their curvature and thickness make them for example impossible to mount in JoWo #6 nib housings. I have seen about 15 to 20 Ambitious nibs. From what I saw through my loupe the nib slits were normally tapered and the tipping halves were also normally aligned.

From what I read, I think your Ambitious nib + feed setup was forced into the grip section bore of your Supreme without heat setting the setup before dispatch. When the feed pushes against the underside of a nib it will generally result in the kind of disappointing (non) writing experience you described, regardless of the quality of the nib.