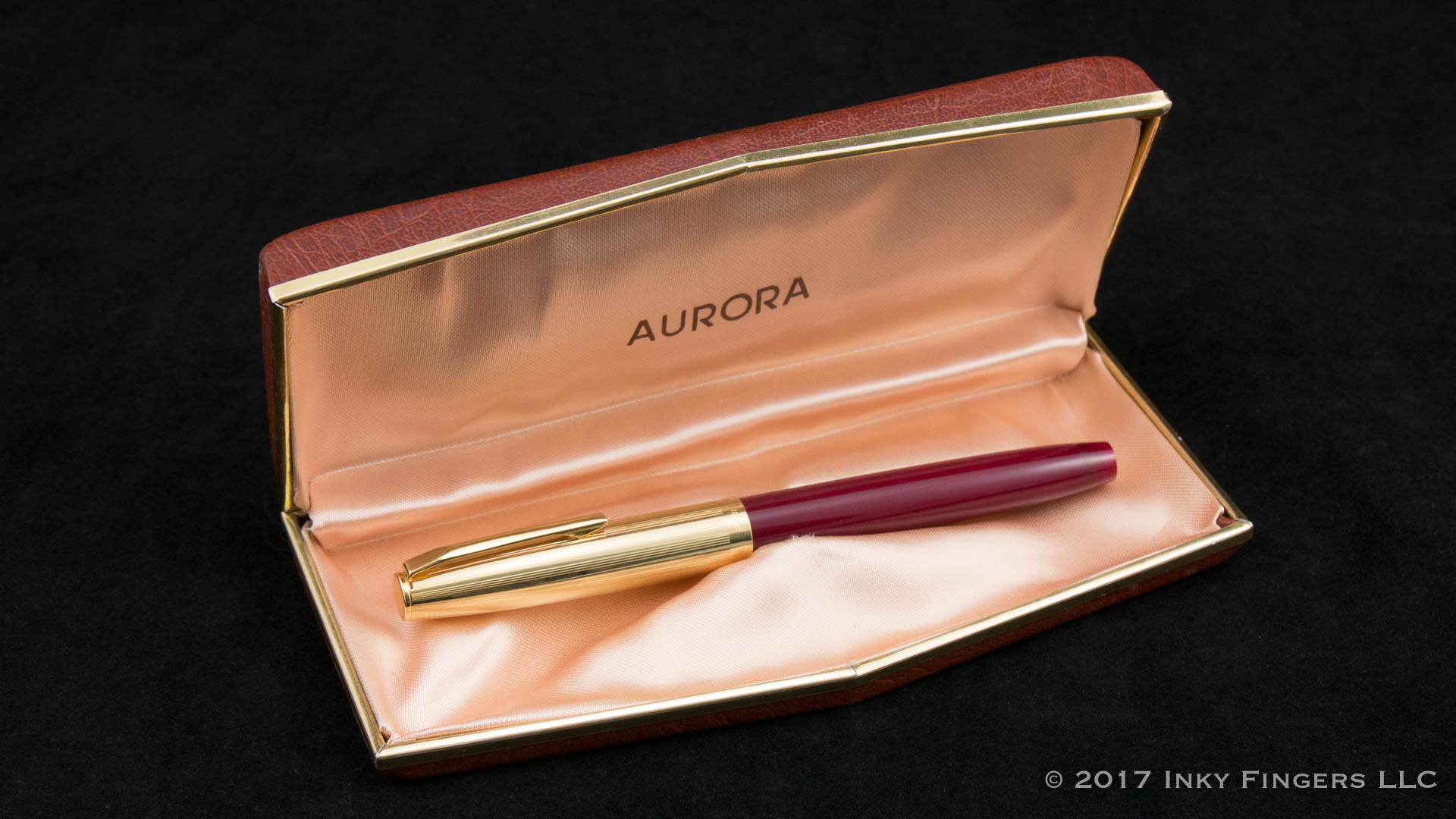 Recently, a large Italian company was celebrating its 60th anniversary, and approached the Italian pen manufacturer, Aurora, with a commission to produce a batch of 1,500 pens to give as gifts to its employees. Instead of just any pen, though, the company requested that Aurora create recreate a pen that would have been available on the market back in the 1950s when the company was founded. Aurora decided to resurrect the 88 Duo Cart, a model that was released in the 1950s and sold through the 1960s. They even found, in their basement storage, a stash of beautiful old vintage boxes that are era appropriate. (Seriously, sniff the pen case. It smells like your grandma’s musty basement.)

After creating the run of pens for this company, Aurora decided to make the pen available to the general public as well, and the resulting pen is what Aurora calls the Duo Cart. (The pen was originally introduced to me as the Duo Cart Vintage, which is how I refer to it in the video, but the official name seems to have been shortened to just Duo Cart.) The Duo Cart comes in two color variations: black/chrome and burgundy/gold. I requested the burgundy version, and I feel like it has a much more vintagey feel to me than the black and chrome.

And vintage really is the word of the day when it comes to the Duo Cart. The design of this pen is very mid-century modern in feel; however, unlike another pen from this era, the Lamy 2000, the midcentury vibe of this pen feels more rooted in a slightly higher-flair Italian design aesthetic than the more Bauhaus-inspired design of the L2K. 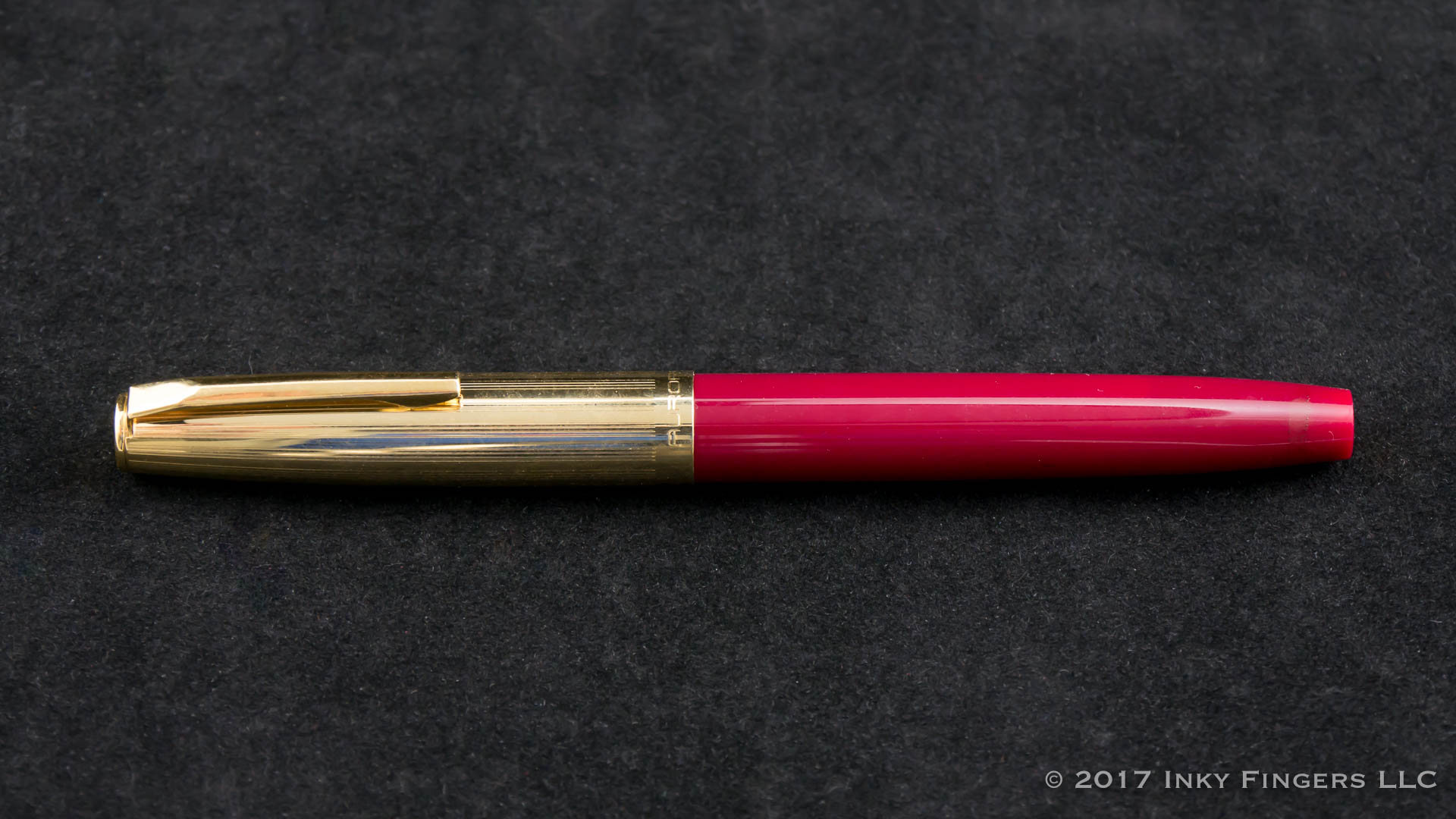 In many ways, this pen is like a flat-topped Parker 51. The cap of the pen is gold-plated (or gold-filled…I couldn’t find the exact specs). It has a very streamlined, clean look, and is highlighted with vertical lines that run the length of the cap. The chiseled clip is quite springy and feels just a touch flimsy.

The cap is a slip-off cap, but unfortunately, the cap itself feels a little on the loose side. It takes very little effort to remove the cap, which means I wouldn’t feel particularly comfortable using this as a pocket pen. I’d be too afraid the pen body would separate from the cap in my pocket and make a mess. (I have spoken with a couple of retailers who have told me that they’ve seen this issue on a couple of pens, but not a large number. The pen’s distributor should provide repair/replacement for this issue if it arises. You can also ask your retailer to check the fit of the cap before shipping just to make sure it works properly.) 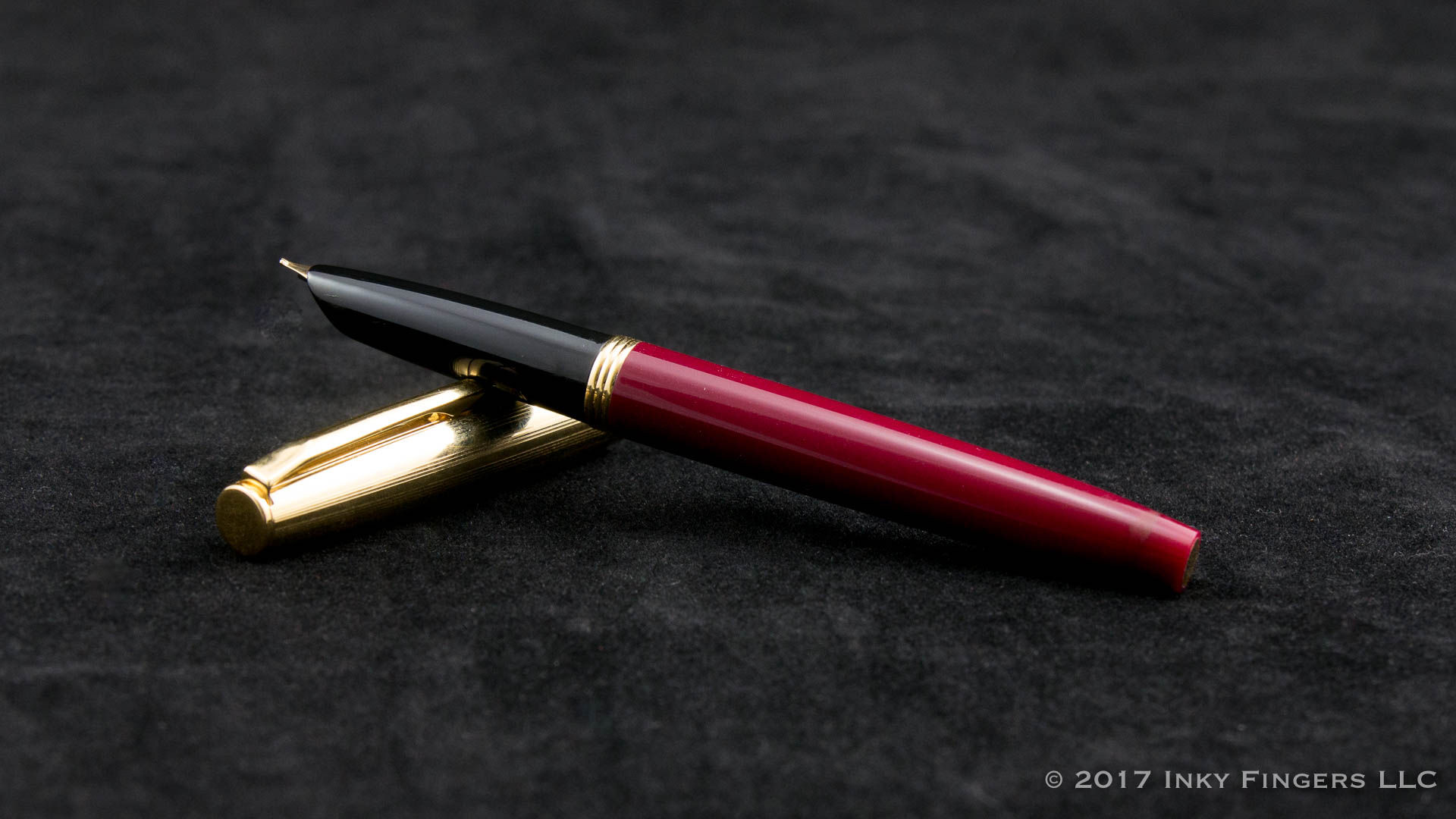 The barrel of the pen has a slightly swooping shape that terminates in a flat end with a gold disc set into the barrel end. The material of the barrel is a solid-color burgundy acrylic, with a very nice polish and sheen.  Under the cap, there is a black plastic section that is largely reminiscent of those on the Parker 51. The slight taper of the section profile is nice and allows for a variety of grip styles. The step-up between the section and the barrel is minimal and is highlighted by a gold band that has been stamped to look like three individual rings. 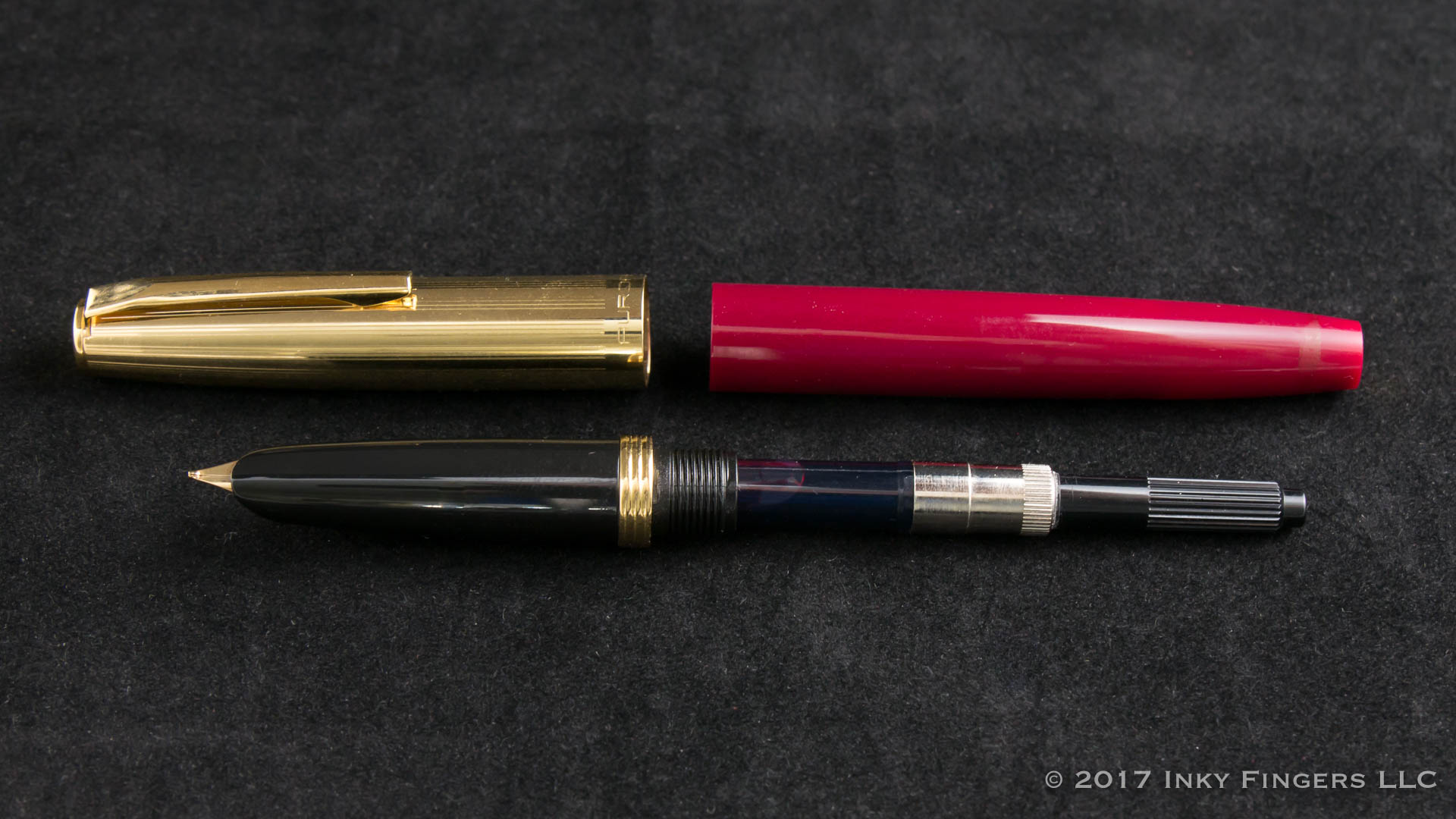 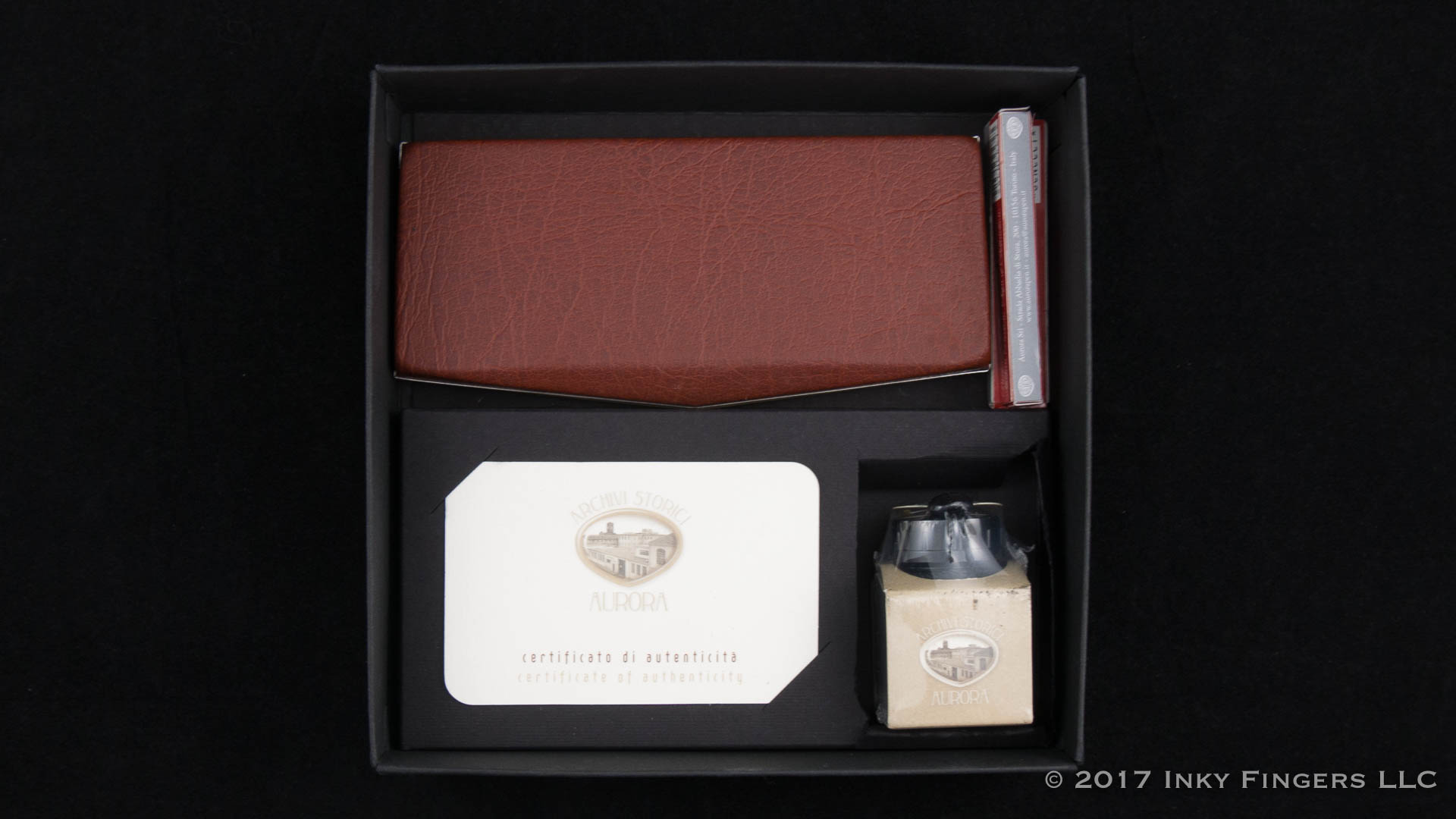 The pen comes with two cartridges and a converter in the box, as well as a bottle of black ink. 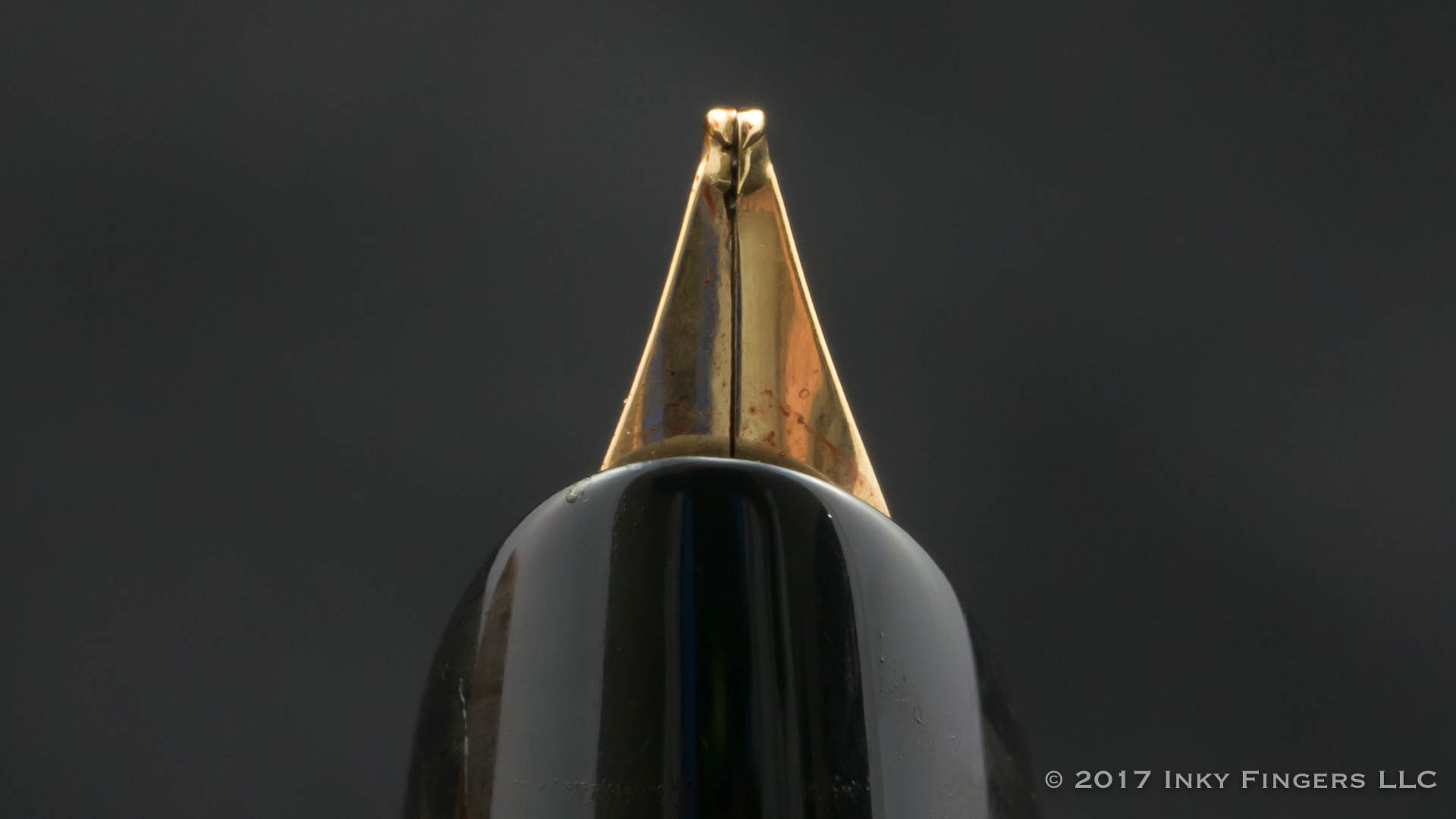 I guess that hooded nibs must have been all the rage back in the 1950s and 1960s, as a way to trick people into thinking they were using one of the new-fangled ballpoint pens that were hitting the market. The Lamy 2000 and Parker 51 both used a hooded/semi-hooded nib design, and the Aurora Duo Cart leans more toward the nib design popularized by Parker 51. The tip of the nib and the small feed sneak out through an opening in the end of the barrel, giving just a glint of the gold color of the nib. 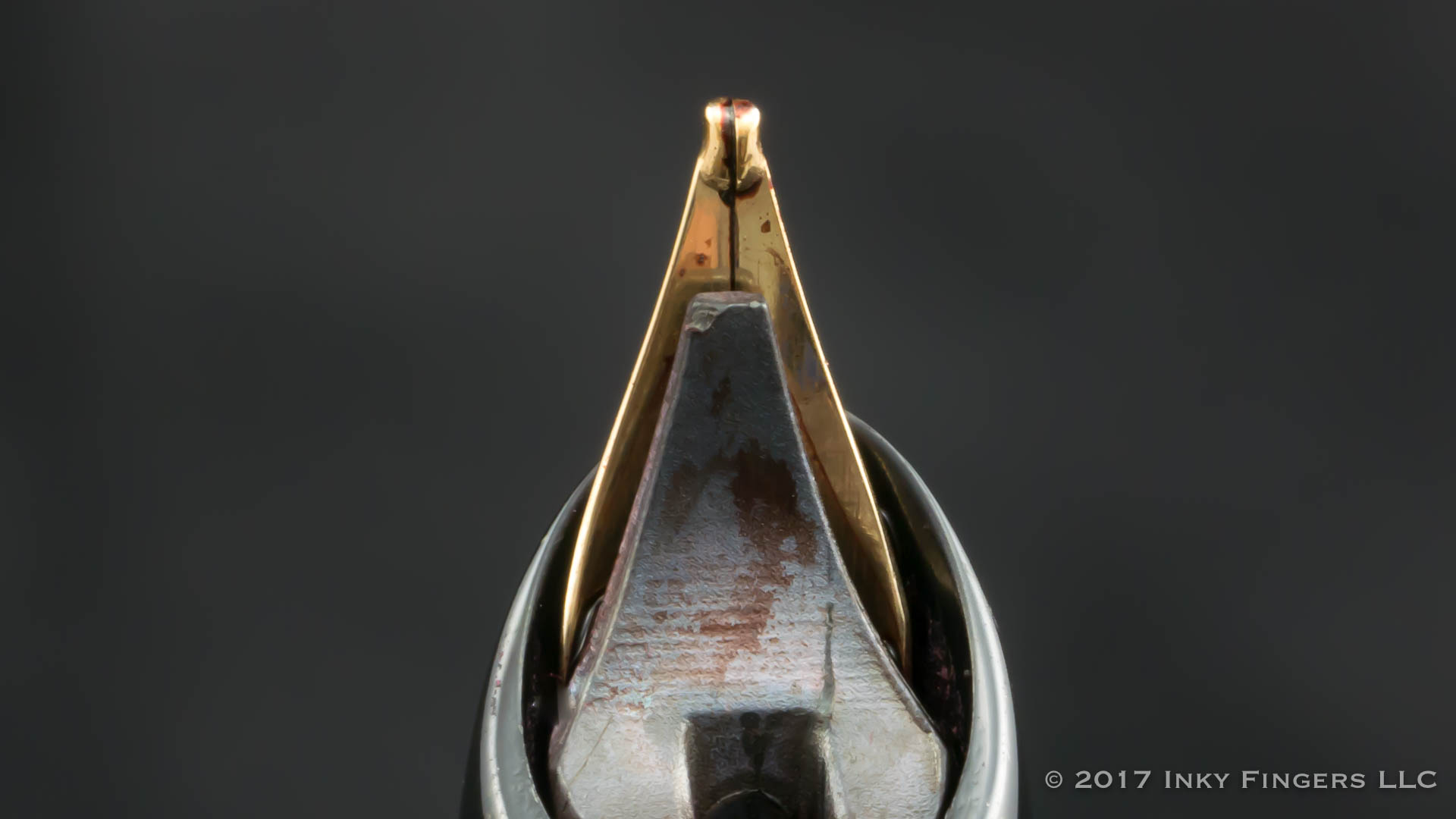 The nib is made of gold-plated steel. To paraphrase Henry Ford, you can get the Aurora Duo Cart with any nib gauge you want, so long as it’s medium. It’s a very lovely medium, though: wet and smooth, but with a nice hint of pleasant toothiness. Aurora makes some of the most consistent and high-performing nibs in the industry, and the nib on this Duo Cart is no exception. 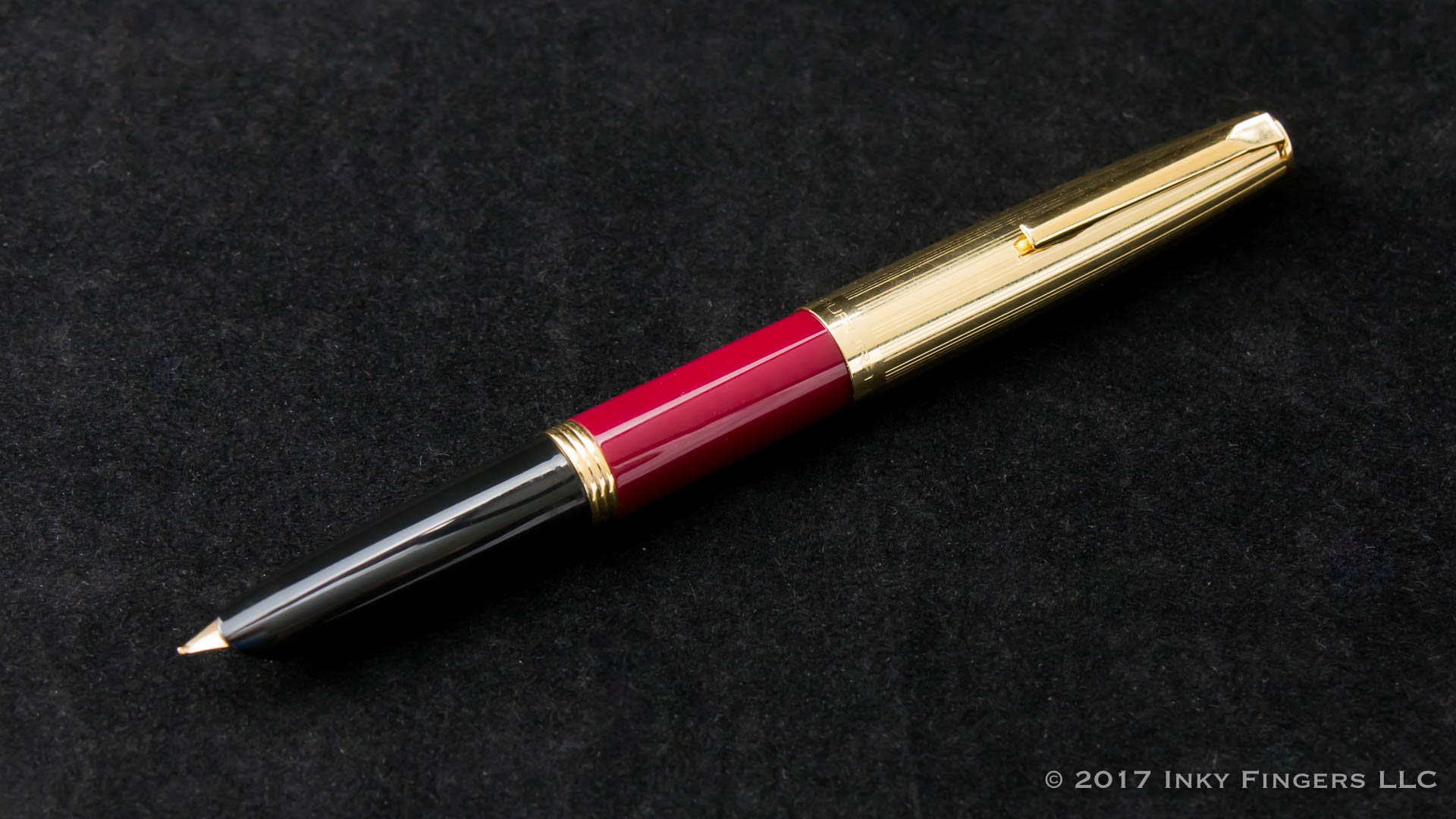 The Duo Cart is something of a smaller pen, but even so, I found it comfortable to use. At an average section width of 10.5mm, it’s still wide enough to be usable for me, while not so wide that it couldn’t be used by people with smaller hands. The pen is a bit short for me to use unposted, and the cap does post quite deeply. With an all-metal cap on the back of a mostly plastic body, though, posting the pen does change the balance a bit more than I’d like. Fortunately, the center of the added weight happens to rest on the web of my hand, so it’s not an issue at all; I was able to use this pen for long writing sessions without hand cramps or discomfort.

The Aurora Duo Cart black and chrome lists for $195 and retails for $156. The burgundy and gold version lists for $225.00 and retails for around $180. At these price points, this puts the pen in direct competition with pens like the Lamy 2000, Platinum 3776, and Pilot Custom 74. From a writing perspective, the Duo Cart more than holds its own with any of those more well-known pens.

Now, it’s true that the Duo Cart does have a steel nib instead of a gold nib. However, I’ll say this: the main reasons I purchase gold nibs (softer material, often wetter ink flow) are often a non-issue with hooded nibs, which pretty much never have much bounce. The ink flow on this nib is generous, and the nib tip smooth. It’s a pretty spectacular steel nib.

The styling of the Duo Cart is not for everyone. But if you’re looking for a vintage look in a modern pen, the midcentury design of this pen may be right up your alley.

The pen for this review was provided free of charge for review purposes. No additional compensation was provided, and all opinions expressed herein are my own.